It’s an immigration story as old as America itself.

Someone is born in the United States to immigrant parents, and they assimilate, but their life is filled with little slices of where their family is from. Then they move to a city and create their own identity forged with other immigrants around them. As they grow, they move to the biggest city they can find, leaving a little of themselves behind but finding the world discovers their greatness.

In this case, the immigrant is a sandwich.

The Cuban sandwich is on menus around the world. Though you might find small variations, the most ubiquitous style includes ham, mojo-roasted pork, swiss cheese, and mustard on bread. It carries the name Cuban, but aside from the pork on the inside, the sandwich has about as much to do with Cuba as snowmobiling. But somehow, it’s become the island’s most famous export this side of Gloria Estefan.

Are there Cuban sandwiches in Cuba?

Go to Cuba and you’d be hard pressed (no pun intended) to find a Cuban sandwich anywhere (read about authentic Cuban food here). Mostly because, much like alfredo sauce, fajitas, and General Tso’s chicken, the Cuban sandwich is largely an American creation.

“I think people romanticize the culture of Cuba because they don’t understand it,” Mandy Baca, a Miami-based food writer and the author of The Sizzling History of Miami Cuisine, tells Matador. “The concept of sandwiches being a part of Cuban cuisine is not that prevalent. Sandwiches weren’t really part of the cuisine, it was more about the pork by itself. Sandwiches were what you ate late night, or hungover from being out, or after a funeral. It wasn’t something you did on a daily basis.”

At least that was the case until cigar factory workers wanted a snack.

Between 1868 and 1898, when Cuba was fighting its wars for independence from Spain, a flood of Cubans left the island and landed in Key West, Florida. At the time, Key West was home to about 80 cigar factories, which quickly filled with Cuban immigrant workers. This was when they discovered America’s classic, simple ham and cheese sandwich and gave it a Cuban twist.

“Effectively, the Cuban sandwich is just a ham and cheese sandwich,” Baca says. “[Cubans] made their version of the sandwich, which was Cuban bread, pickles, ham, roast pork, swiss cheese, and added tomato, lettuce, and mayo.”

They called this new sandwich mixto, meaning it was basically a mixture of different meats. It wouldn’t gain the “Cuban” moniker until later in the century. 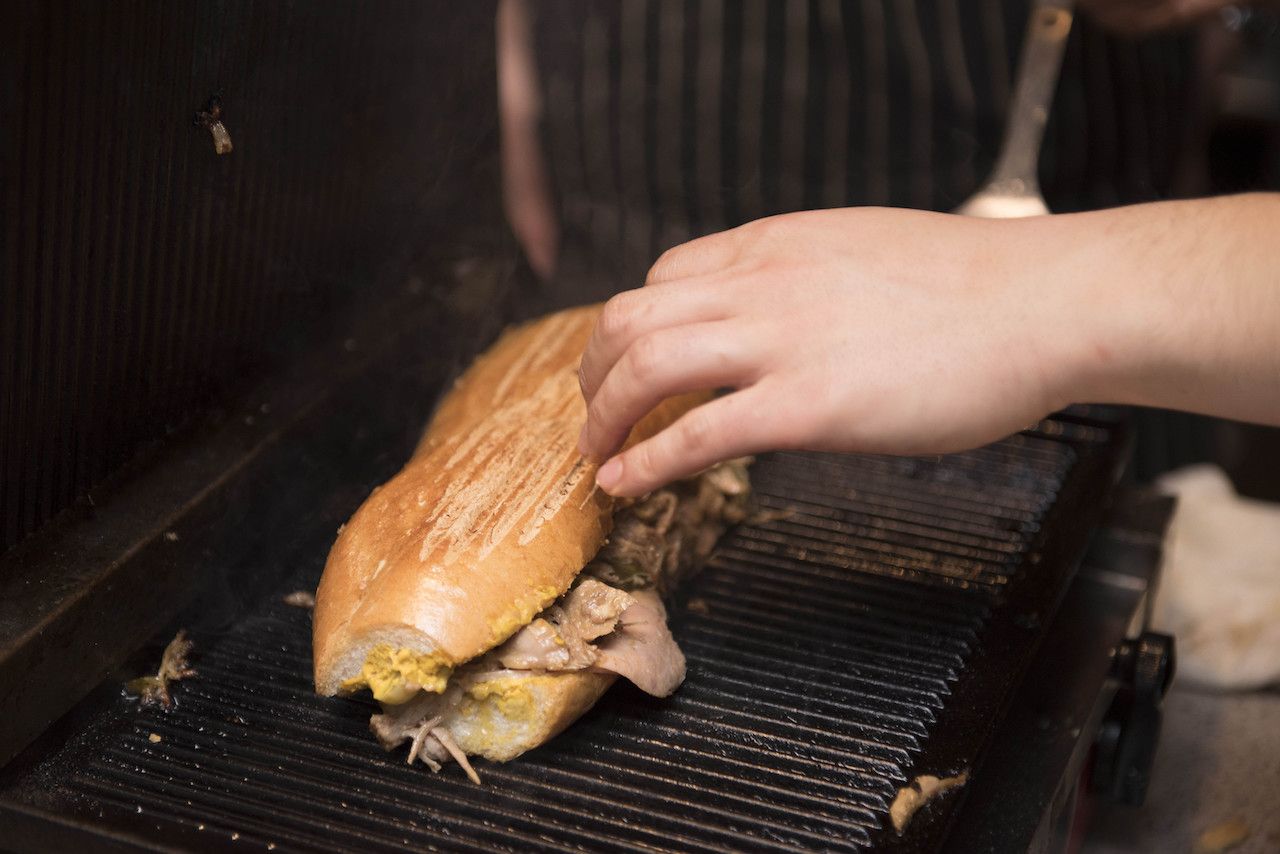 Sometime around 1886, a massive fire destroyed a Key West cigar factory belonging to Vicente Martinez Ybor, who opted to move his operations up the gulf coast of Florida to Tampa. He set up shop in the area that would become known as Ybor City, which was the cigar-making capital of the world for a period of time. Cuban immigrants moved with him, bringing their trademark sandwich along. As they worked side-by-side with Italian immigrants already in the area, they introduced Genoa salami to the mixto.

Around the same time — about 1896 — a Sicilian named Francisco Ferlita created a new bread at his Ybor City Joven Bakery. It was a little like a French baguette, about three feet long with a hard, crispy crust and a soft, airy inside. The top was scored with a palmetto leaf to create a canyon down the middle of the loaf. It was square on the ends and usually shortened with lard. He called it Cuban bread.

Though no hard proof exists, anecdotally the mixto became popular on Cuban bread. Thus the modern Cuban sandwich was born. The preparation is simple, but specific: Cut the bread in half, then layer ham, mojo-garlic marinated roast pork, and salami, in that specific order. Then add swiss cheese, pickles, and mustard spread on top. Lettuce, tomatoes, mayonnaise, and whether or not to press the sandwich are still topics of heated debate.

The Cuban sandwich moves to Miami

The original Tampa-style Cuban sandwich made its way down to Miami during the first half of the 20th century as The Magic City grew into the state’s major commercial center. An ad from the 1937 Miami News shows a Cuban sandwich that included salami. This is proof that at one point, Miami embraced the salami-inclusive Cuban. Things didn’t stay that way, however. When a new wave of Cuban immigrants came to Miami in the 1950s and 60s, they began to make their own modifications to the sandwich.

“In Miami, the recipe eventually changed because there is not a large Italian population here,” said Baca. “Again, the sandwich is a story of immigration.”

There is no written record of when Miami first popularized the salami-free Cuban sandwich, but Raul Galindo, who founded the Latin American Cafeteria, claims to have been the first to serve this style in 1974. Though the claim is unsubstantiated, nobody has contradicted it either, so Florida food lore says this is where the Miami-style sandwich got started. And as Miami’s Cuban population exploded through the 1980s and beyond, the city began to claim the sandwich as its own.

The Miami version has become the more commonly accepted style. It’s the salami-less “Cubano” that graces menus around the world. And even though the sandwich originated in Key West and Tampa, people associate it with both Miami and Havana.

“The story of Miami, and Cubans in Miami, and the mystique of Cuba as a whole is the more prevalent story,” Baca explains when asked why people incorrectly associate the Cuban sandwich with coming from South Florida. “Like a lot of history, it is word of mouth, and, what’s the adage? History is written by the winners? Or in this case whoever had the great marketing chops.”

The rivalry between Tampa and Miami as to who can claim the Cuban sandwich rages on, and it’s probably a rivalry more people care about than, say, the Rays and Marlins. It is indeed a story of immigration and change, and if a people’s story can be told through the evolution of a sandwich, it is most certainly the Cuban. 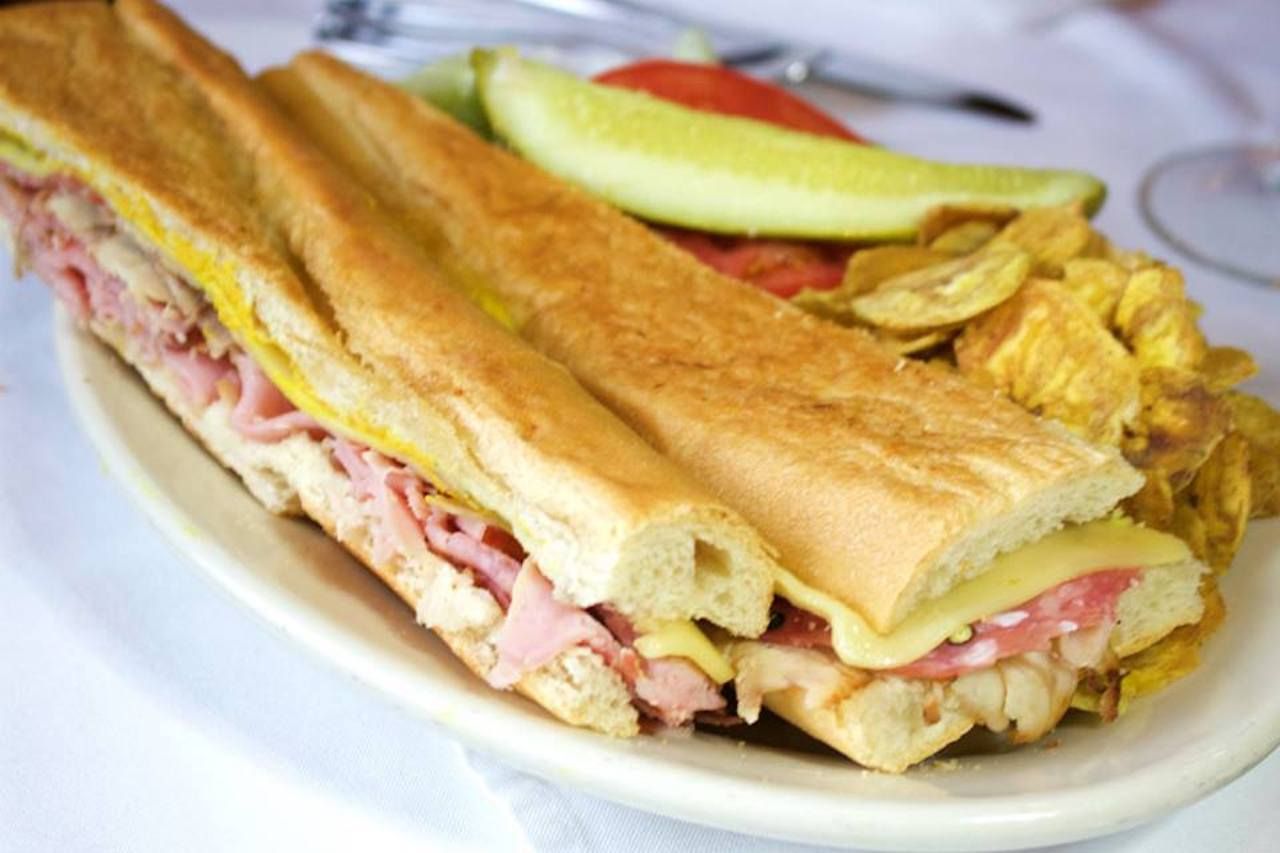 Columbia Restaurant: What started as a humble food stand in 1905 is now one of Florida’s oldest restaurants. The Cuban is made from a recipe that dates back to 1915 from the founder, Casimiro Hernandez. Sr. Columbia includes Genoa salami, doesn’t add mayo, lettuce, or tomato, and gets its bread from La Segunda Central Bakery in Ybor City.

La Teresita: The business started as a grocery store in the early 1970s before expanding with a coffee and sandwich shop. The latter won out and has expanded into a two-story restaurant that’s beloved for all things Cuban food. Also beloved is the Cuban sandwich served at La Teresita. It’s extremely affordable and, like Columbia Restaurant, forgoes the mayo, lettuce, and tomato. 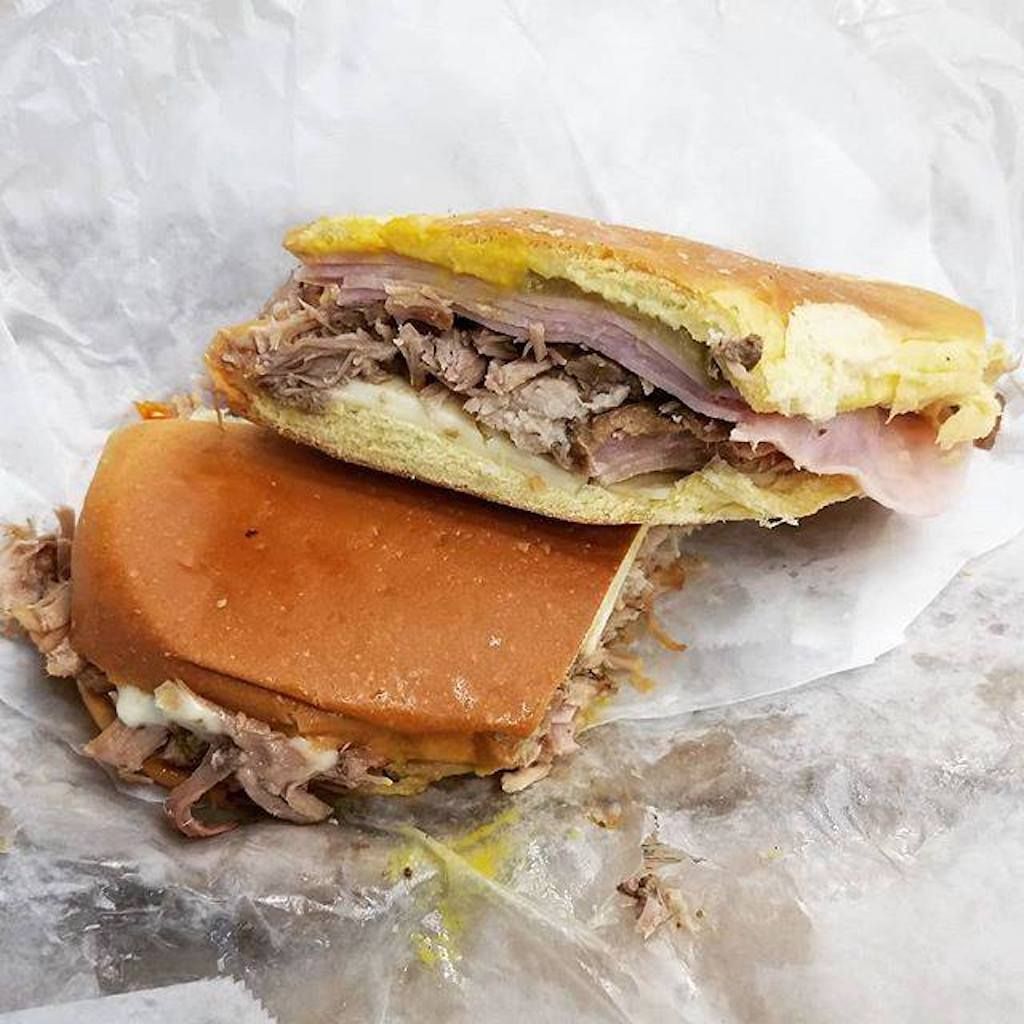 Las Olas Café: A corner café that’s a favorite among locals, tourists, and anyone who catches a whiff of the food and coffee as they walk by. Walk inside or order from the takeout window and you’ll shortly have a Cuban sandwich in your hands that will make you a believer in Miami-style Cuban sandwiches.

Enriquetas: A simple breakfast and lunch spot with an indoor seating area and a take-out window. It also happens to make some of the best Cuban sandwiches in the city. If you have time, sit on one of the stools and enjoy your sandwich, which is made with ham, pork, Swiss cheese, and pickles.

These Pensacola Airbnbs Let You Live Your Best Beach Life