Cuban food is a blend of Spanish, African, Native Taino, and Caribbean ingredients and cooking styles. Other parts of the Caribbean and Latin America also have a cuisine based around comida criolla, all with slight variations on similar dishes. If you want to understand Cuban cooking, though, you need to know the island’s idiosyncrasies.

Typical Cuban dishes are highly seasoned and not spicy. The cuisine is often centered around cuts of meat that have marinated for hours or even the day before cooking. While many cultures add sauce after the meat is cooked, Cubans let the flavors soak in by slowly cooking and heavily marinating chicken, pork, and beef for extra depth and complexity.

There are a couple of Cuban ingredients you should know. The first of which is mojo, which is a common marinade of sour orange and lime, onion, garlic, oregano, olive oil, salt, and pepper that’s used to season meat (especially pork) ahead of time. For stews, a sauce called a sofrito is made with chopped tomatoes, green and red bell peppers, onion, garlic, olive oil, and salt, and is used as the base.

Quick note: The most popular food in the US bearing the Cuban name is the Cuban sandwich. It was not, in fact, created in Cuba. It’s a Cuban-American sandwich that was created in Tampa and popularized in Miami.

These are the true Cuban food, ingredients and dishes you need to know. 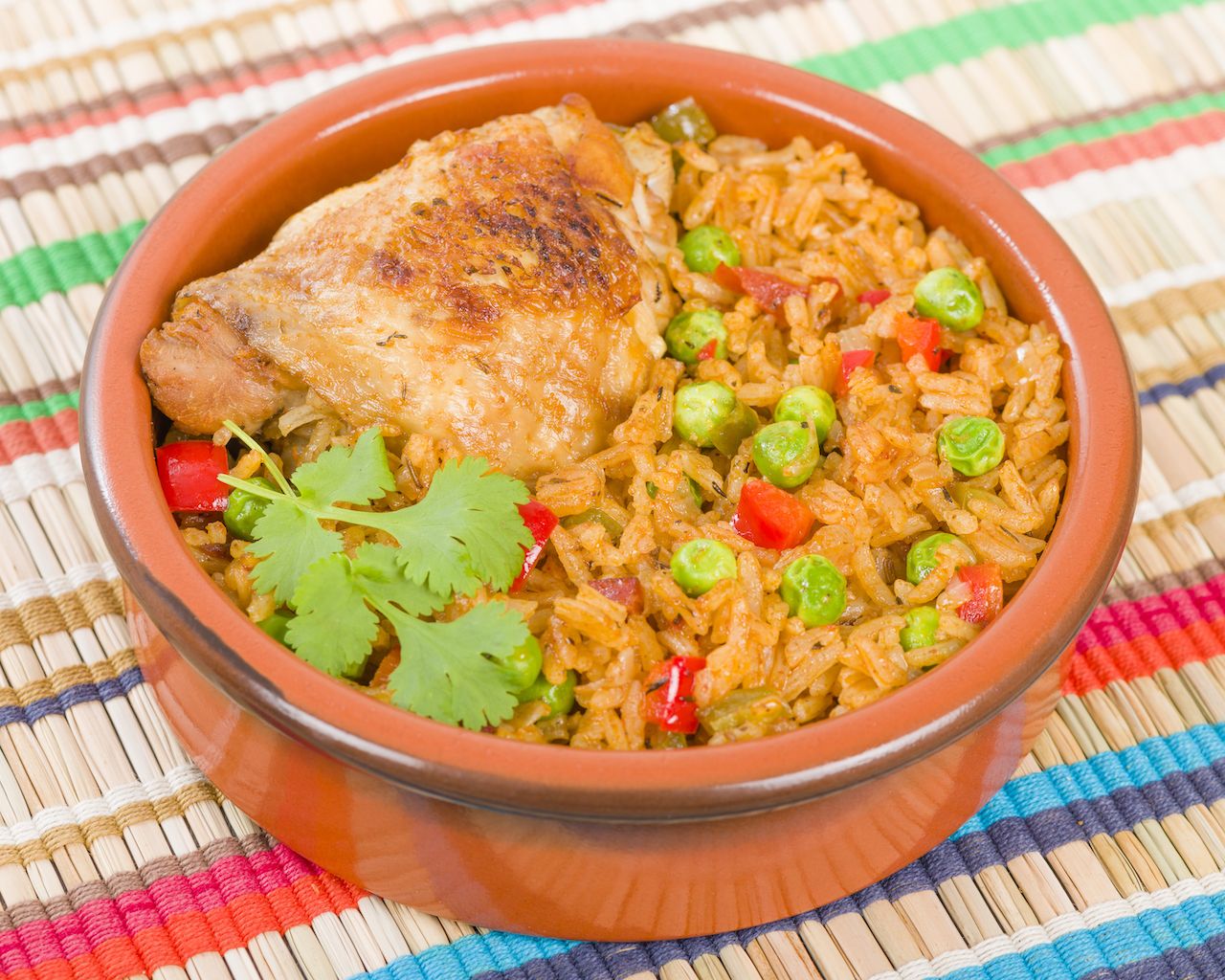 Chicken and rice is the most common staple in a Cuban household. This one pot dish is similar to Spanish paella. There are many variations of arroz con pollo, but the basics include rice, quartered chicken leg or thighs cooked with sofrito, Bijol seasoning, chicken broth, and beer. Peas and roasted red peppers are also traditionally mixed in. 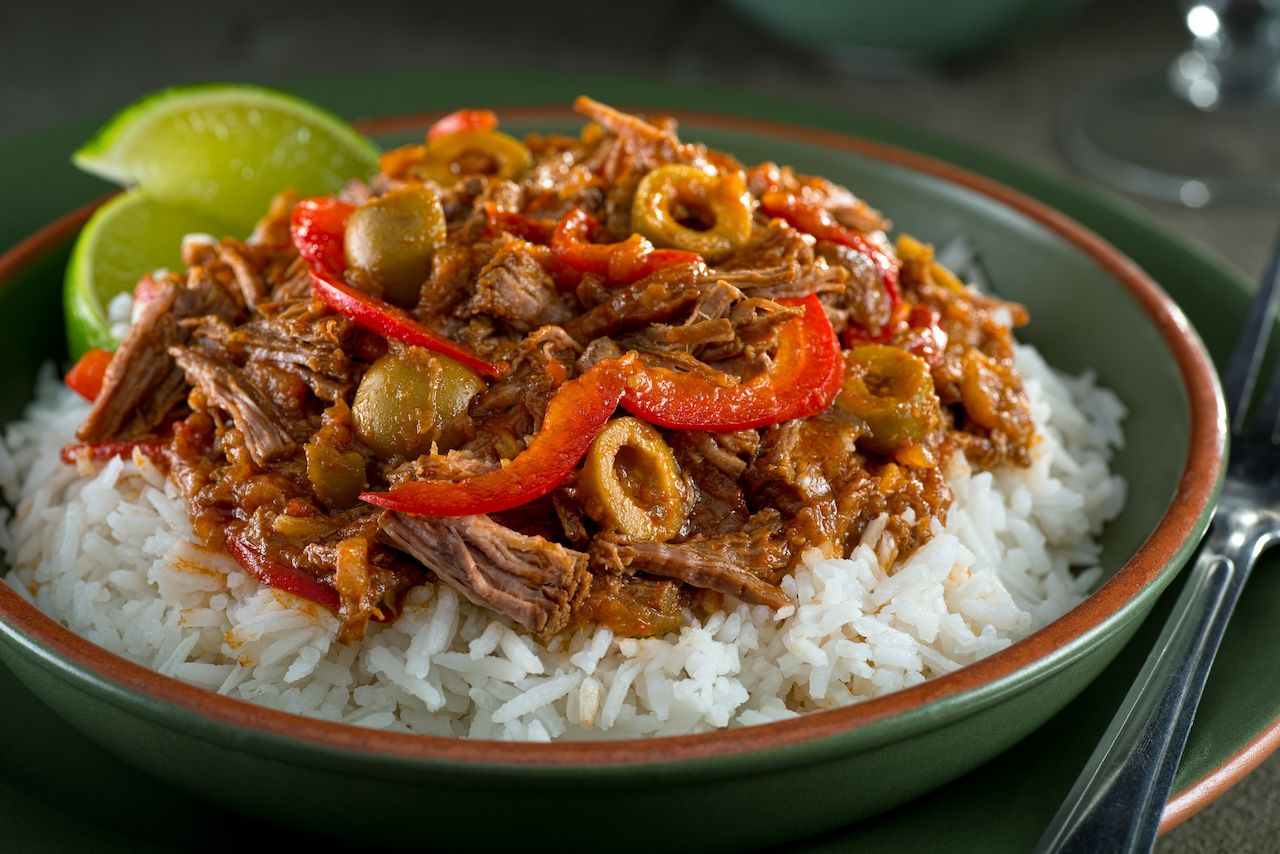 Considered the national dish of Cuba, ropa vieja literally translates to “old clothes” and comes from Spain. The dish is made with shredded beef that’s slow cooked in a tomato-based sauce with onions, bell peppers, garlic, and cooking wine. It is always served over white rice and accompanied by maduros (sweet plantains) or tostones (fried pressed plantains). A similar dish with a twist is vaca frita, or fried cow, which is a flank steak marinated in mojo and then fried with garlic and salt. 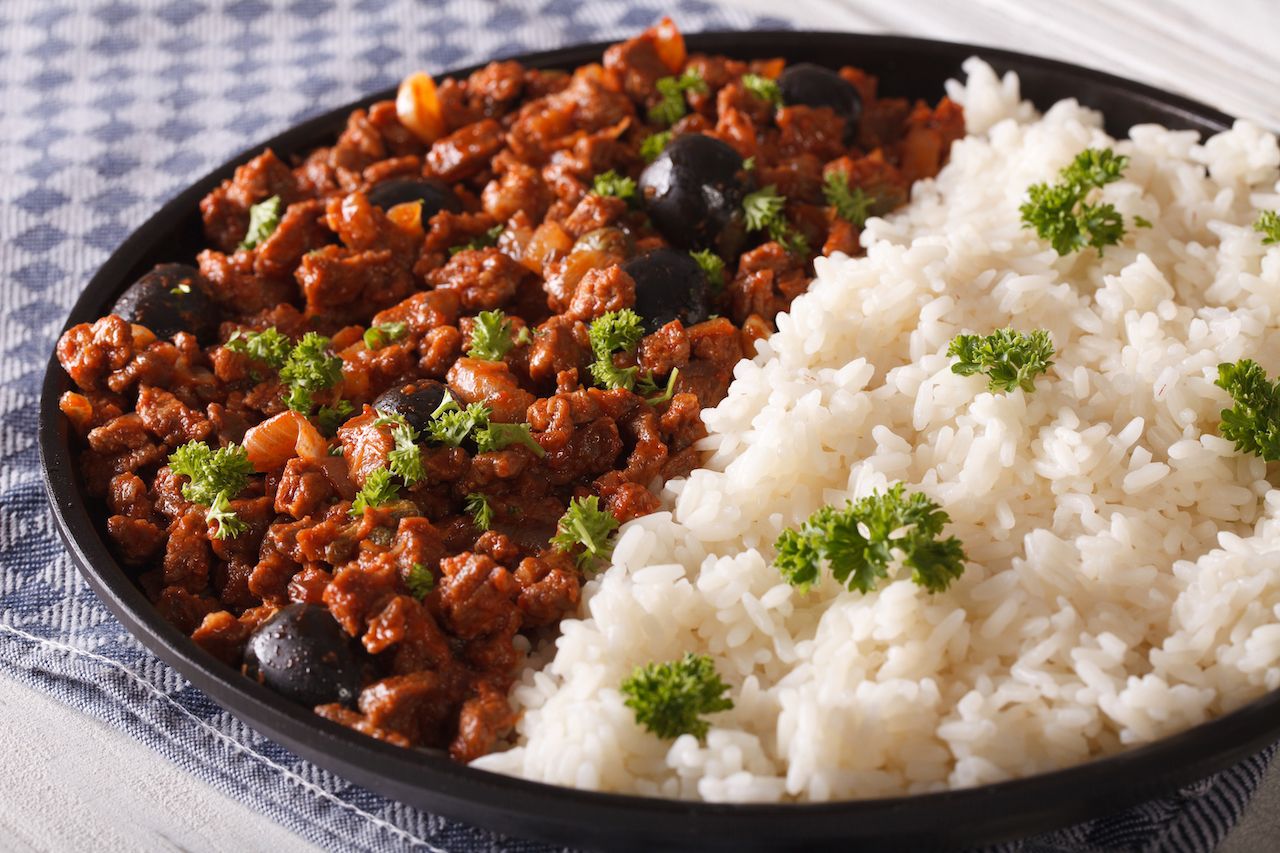 This simple dish is another Cuban food classic that’s a perfect weekday meal. It’s ground beef that’s browned with garlic, onions, bell peppers, oregano, bay leaf, and salt. Then, the beef is simmered over low heat with tomato sauce, cooking wine, olives, and raisins. White rice is mixed in once all the flavors combine. The dish comes from Spain, and the name comes from the word picar, which means to chop or mince. 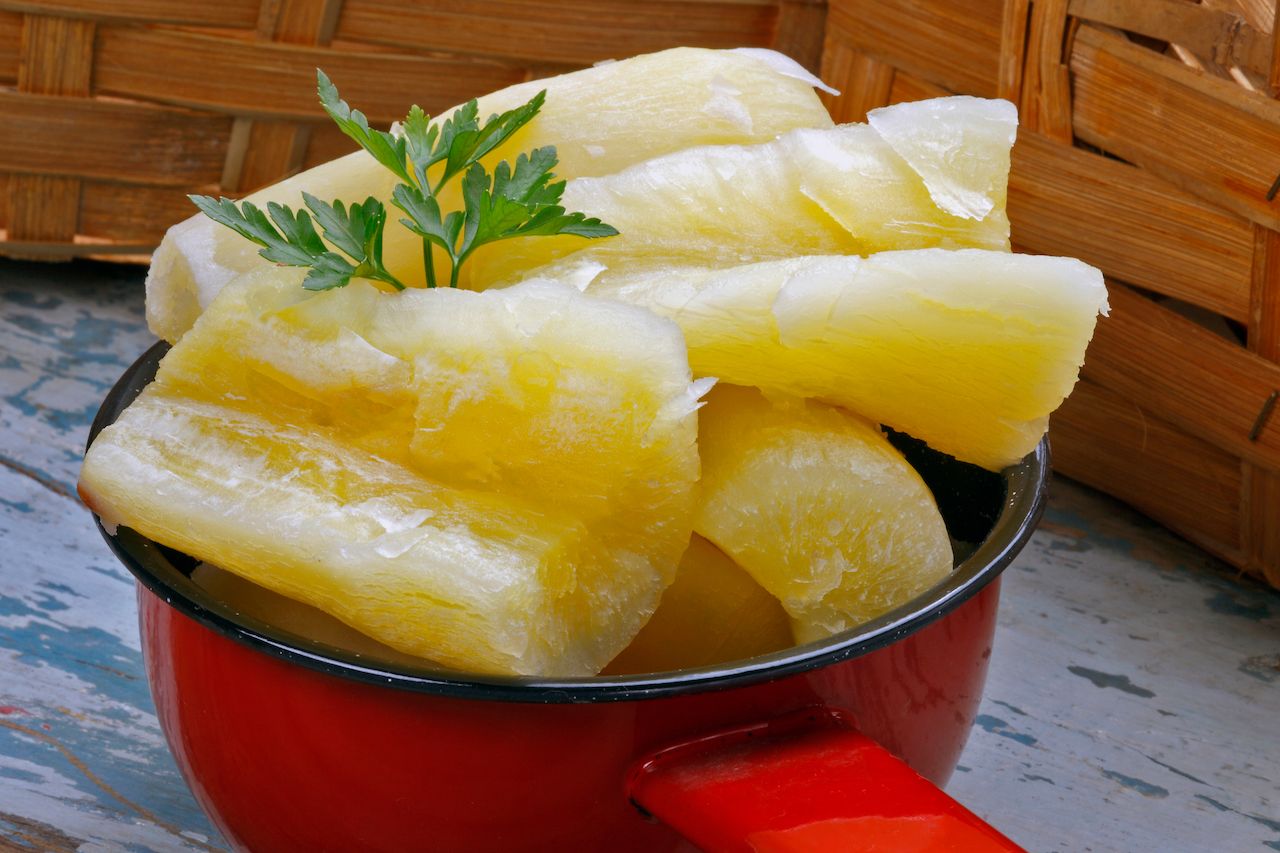 Yuca is the root of the cassava plant. Its flavor is similar to potatoes, and it’s one of the staple sides in Cuban cooking. Cassava comes from South America, and it’s used in various ways in different cuisines around Latin America and the Caribbean. In Cuba, yuca is often cooked until soft and then covered with a garlic mojo for added flavor. 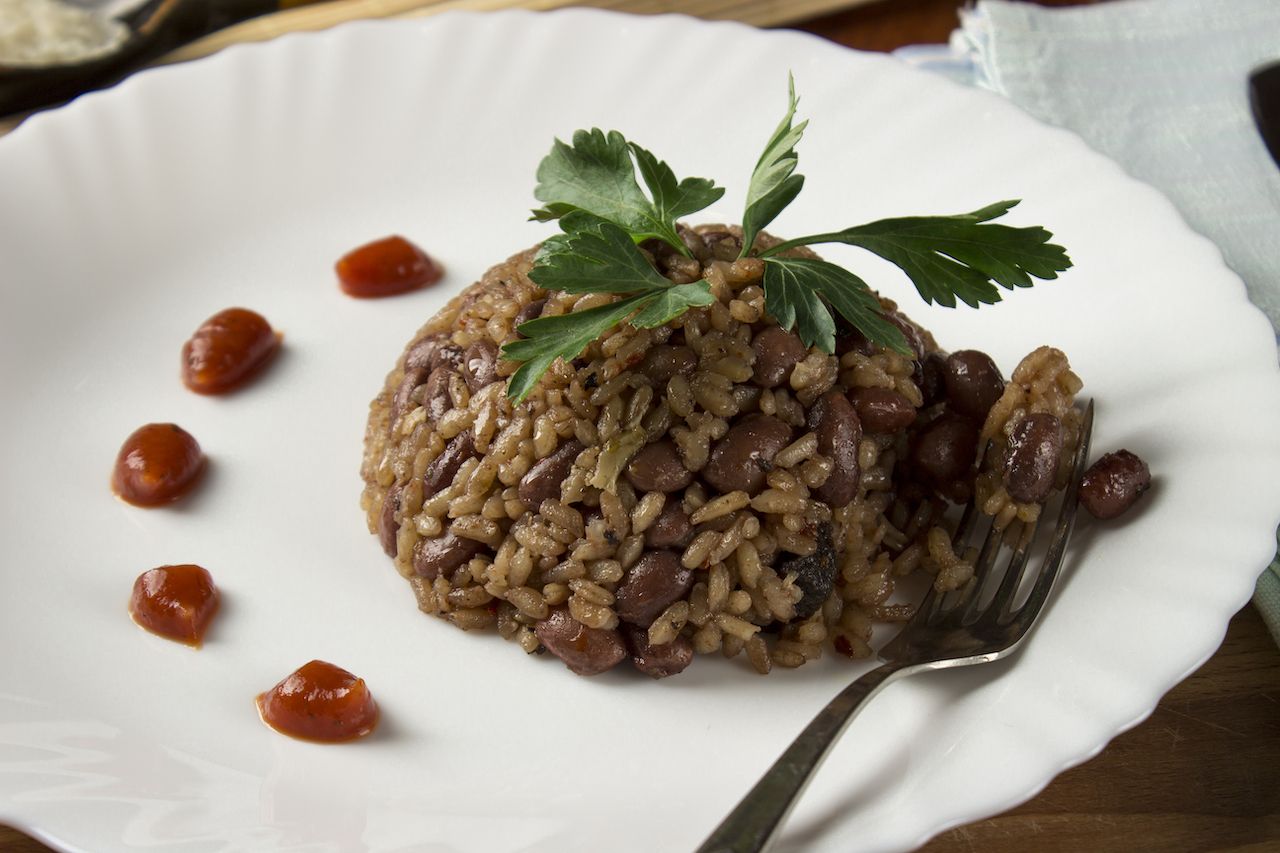 Black beans are a standard addition to many Cuban dishes. They’re cooked with white rice to make a delicious and ever-present dish known as congri, and are the base of a thick black bean soup that’s stewed for hours and made with whatever is available. The same can be said of frijoles colorados, or red beans. Congri’s black beans and rice can be found with slight variations all over the island. 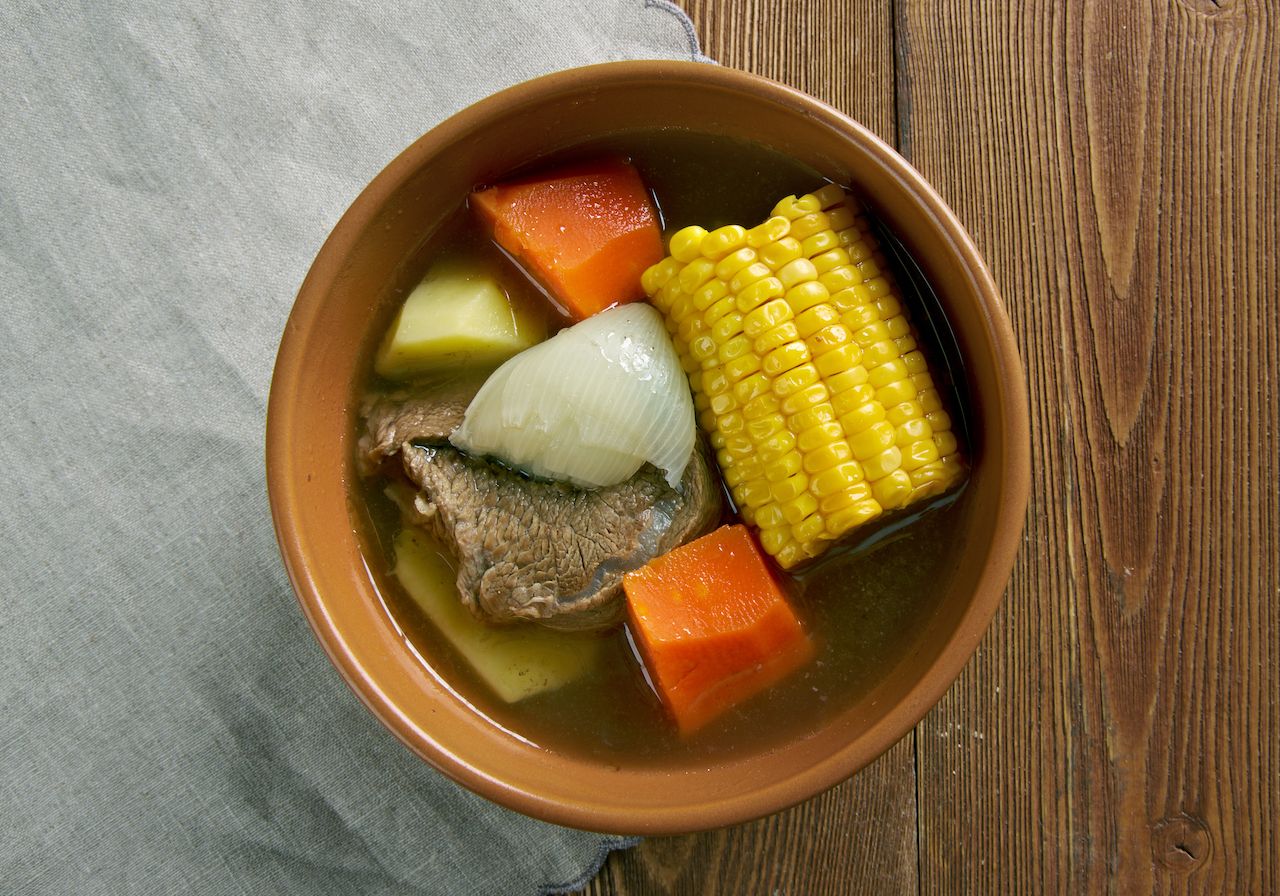 A stew that’s made with a little bit of everything, ajiaco is a recognizable and well-loved Cuban food. Cooks often throw together what they have on hand to make ajiaco, but common ingredients include corn, sweet potato, malanga, plantains, beef or pork, tomato paste, garlic, onion, and lemon juice. 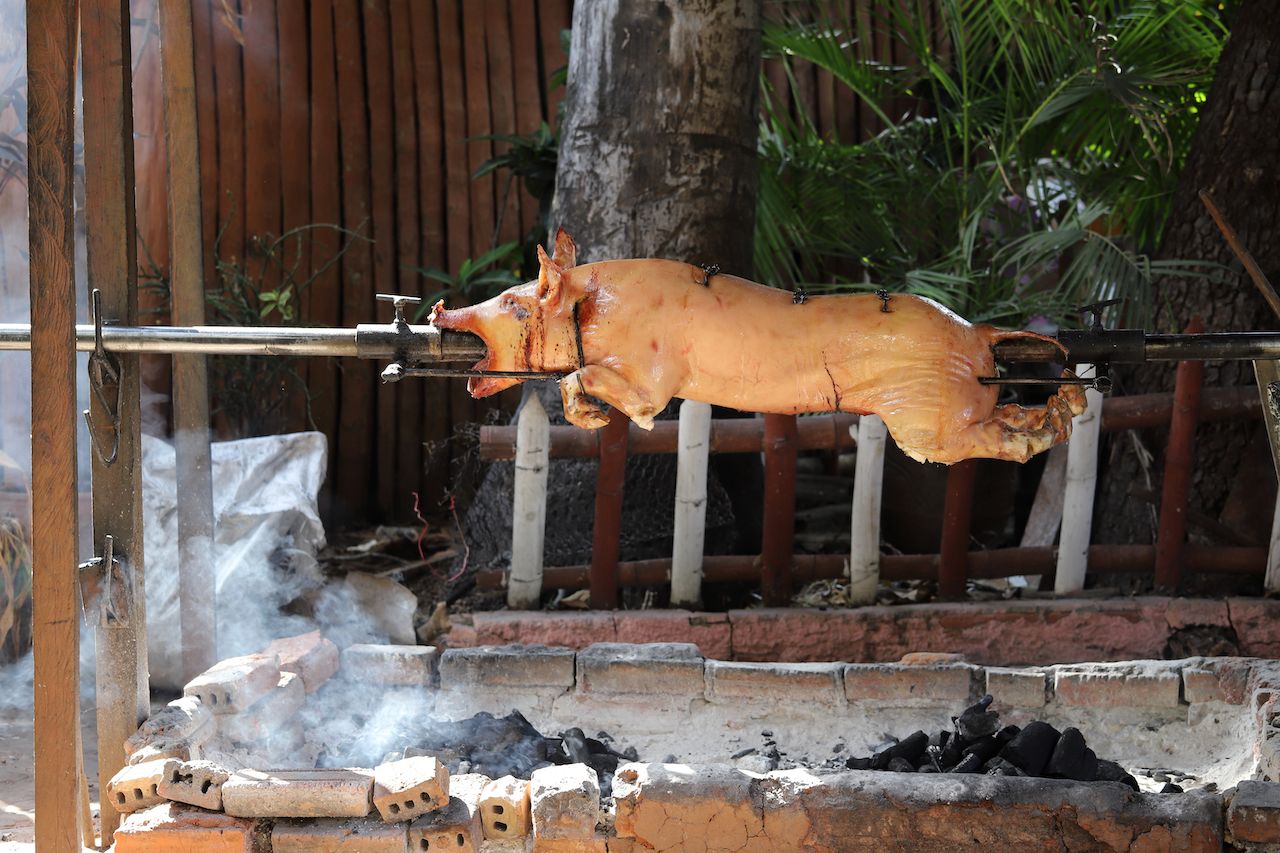 Lechón is a roasted suckling pig, and variations are found in many former Spanish colonies, including in the Philippines. During the holidays, Cubans will cook a whole pig over a spitfire, turning it often until the skin gets crispy. It’s heavily marinated with mojo, and lechón is the centerpiece of the family meal. As a leftover, it can be converted into a tasty sandwich known as pan con lechòn. 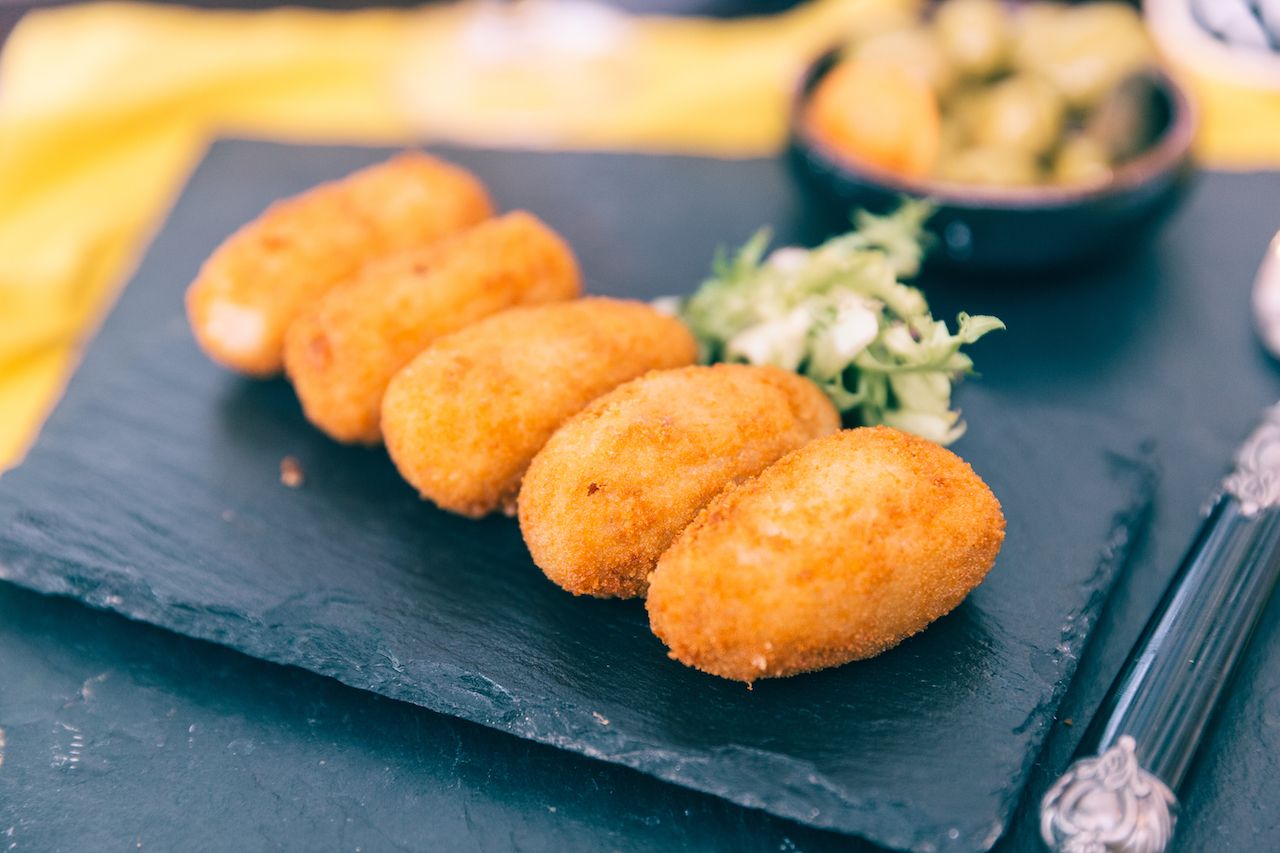 A dish brought over by the Spanish, a croqueta is type of fritter. A ball of dough is filled with ground ham or chicken, sometimes cod, and mixed with onion and garlic. It’s then deep-fried into elongated rolls. Croquetas are typically a breakfast item or snack. 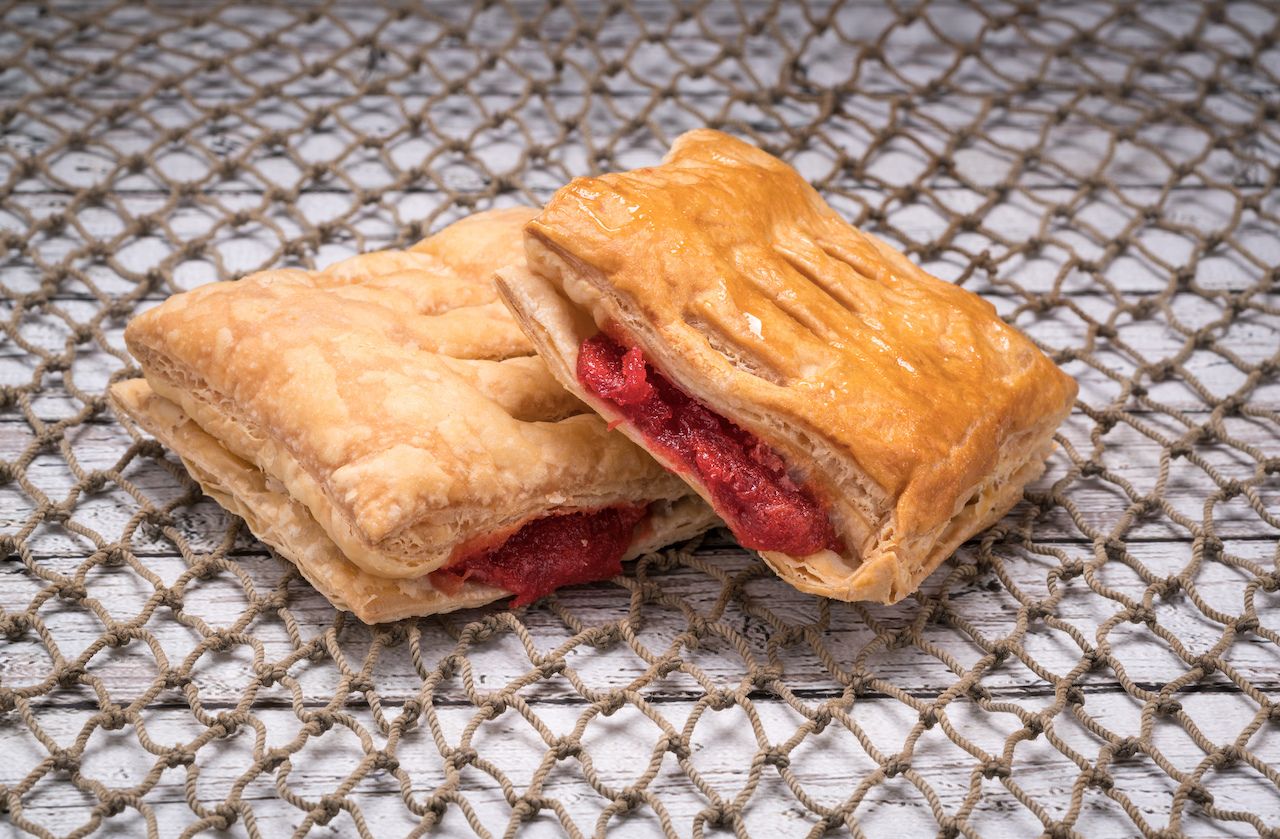 A pastelito is a baked puff pastry filled with something sweet or savory or both. Traditional Cuban fillings include guava and cream cheese, sweet cheese, or ground meat. Like croquetas, pastelitos are usually eaten for breakfast, but can also be a snack. 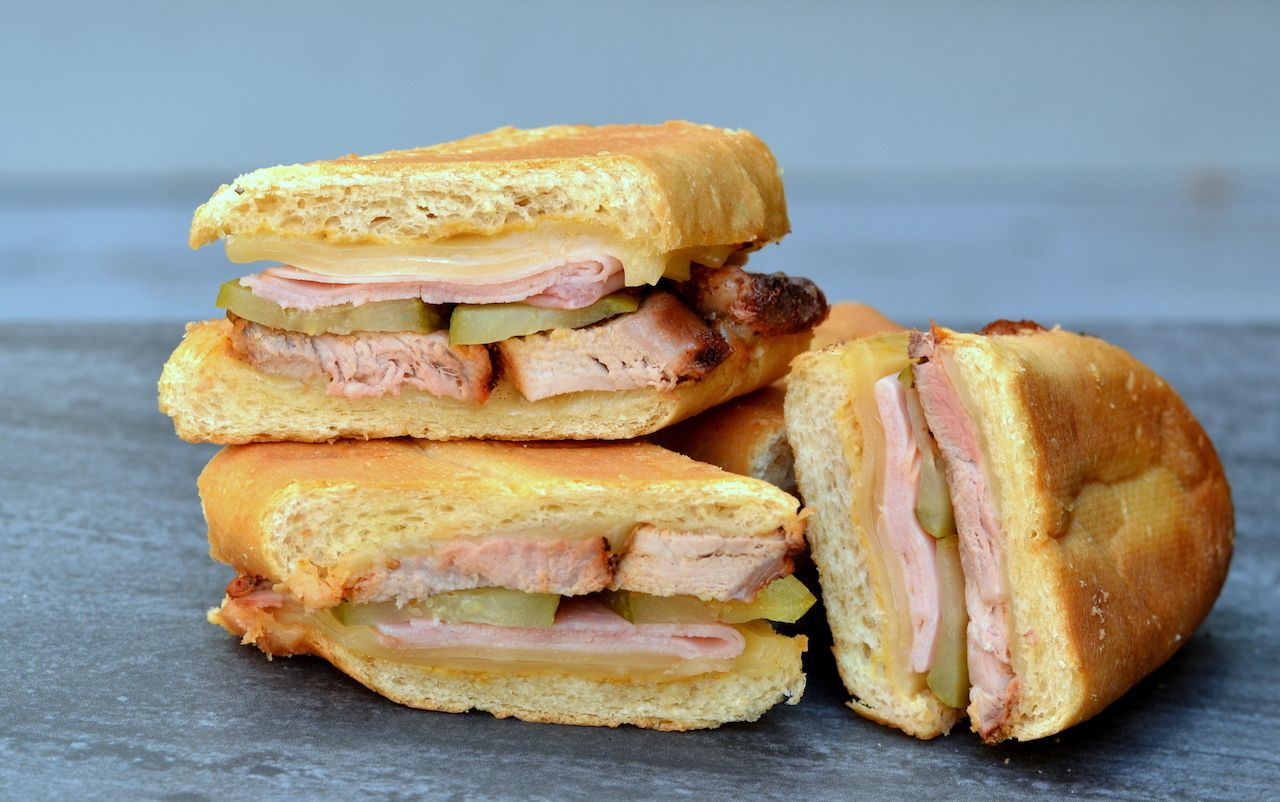 Medianoche means “midnight” in Spanish, but in Cuba it also refers to a popular sandwich eaten at lunch and late at night. It’s the Cuban sandwich that Cubans in Cuba actually eat. It’s almost exactly like a Cuban sandwich on the inside with roast pork, ham, Swiss cheese, mustard, and pickles, but medianoches use a sweet egg bread. 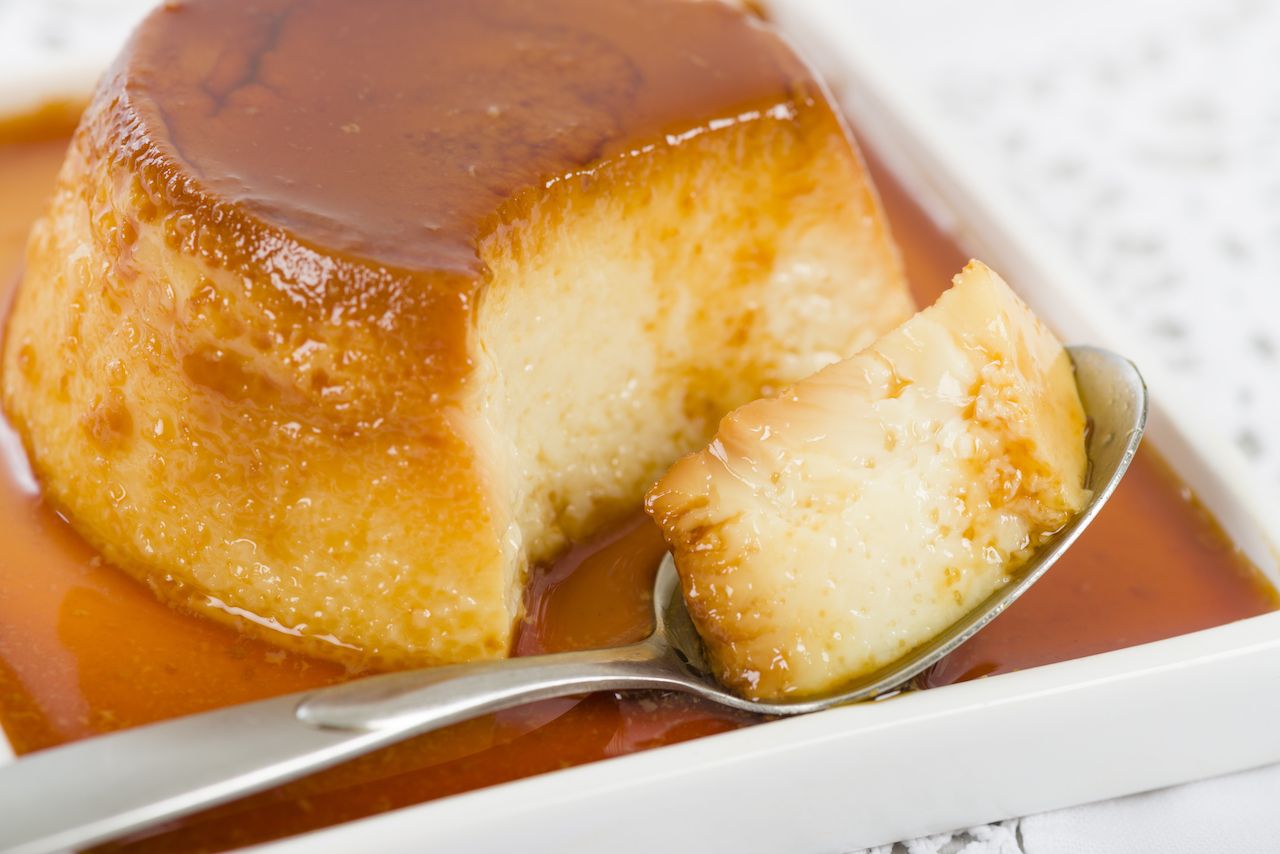 Flan is a common dessert in most Latin American countries. In Cuba, however, they swap the fresh milk for canned evaporated and condensed milk (making it creamier) along with eggs, vanilla, and caramel. Once baked and cooled, the caramel becomes the flan’s crust. Expect to find this decadent treat in every Cuban restaurant. 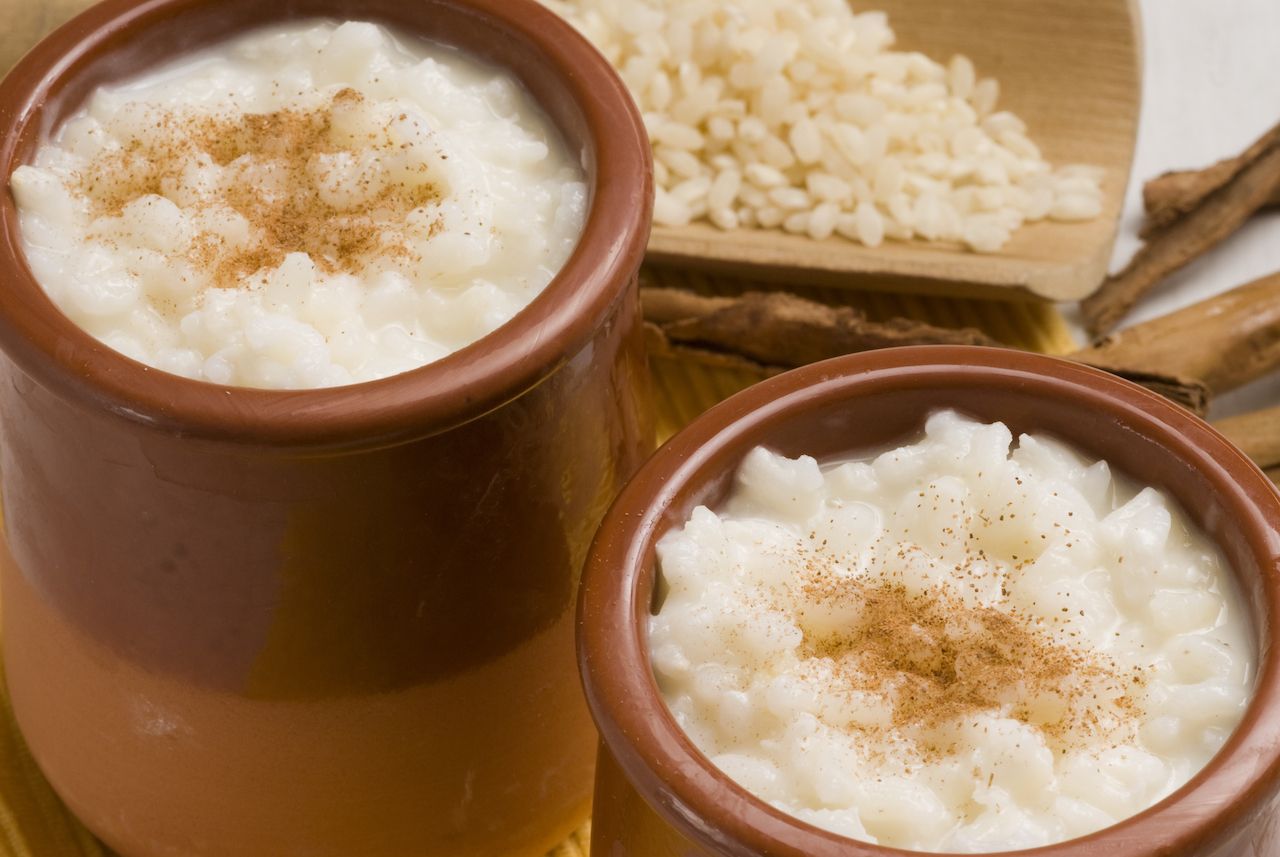 Rice pudding, or “rice with milk” is another popular Latin American dessert. But in Cuba, again, evaporated and condensed milk is used, making it a sweeter and richer dish. Lime peel and other traditional ingredients like rice, vanilla, and cinnamon complete a proper Cuban arroz con leche. 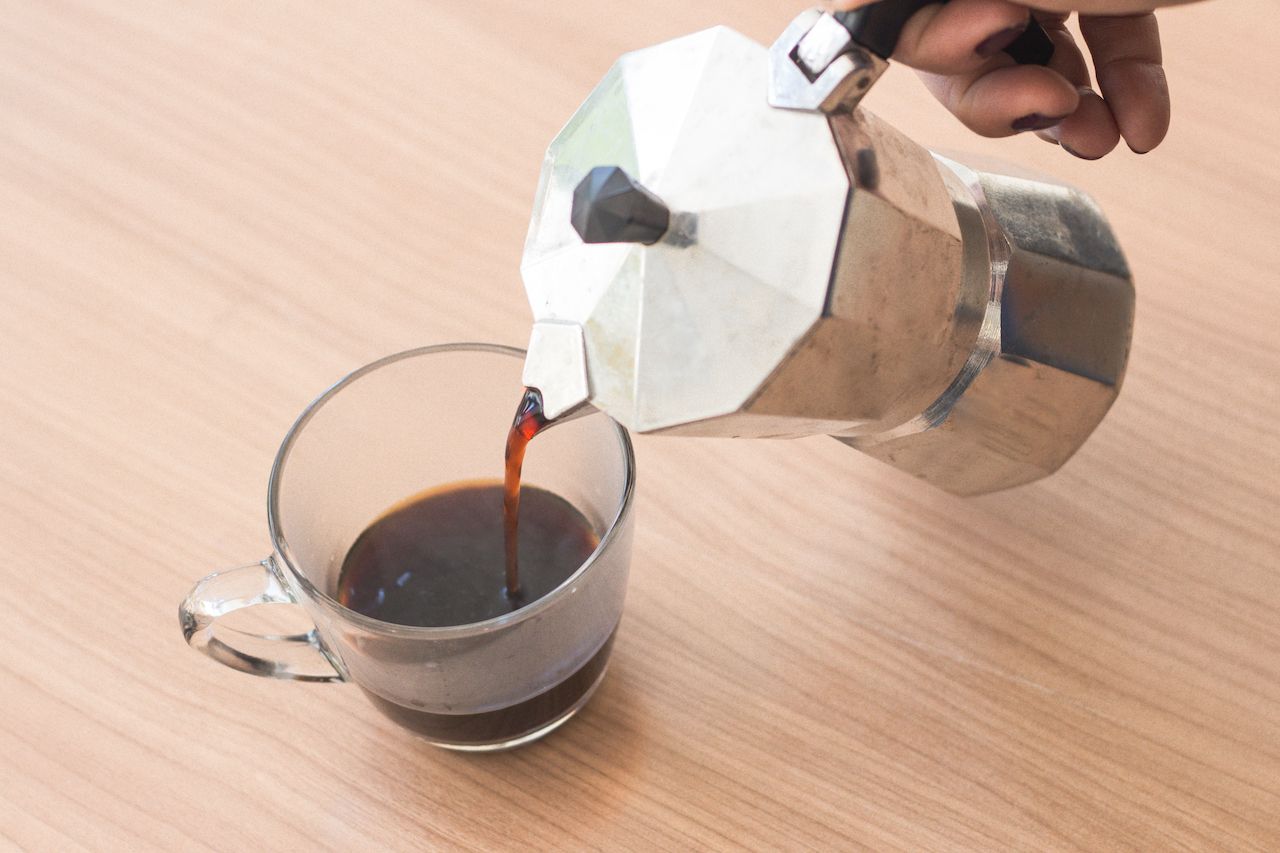 Cuban coffee is a dark espresso mixed with sugar that can be served in a variety of ways. Café con leche is the usual name for a cup of warmed milk with a shot of Cuban coffee. This is a standard part of breakfast — as well as a middle-of-the-afternoon pick-me-up and after-dinner sipper. A cafecito or cortadito are the usual drinks of choice. A cafecito is an ounce or two of straight-up Cuban coffee, while a cortadito “cuts it” by adding steamed milk.

Food + DrinkCuba’s Most Famous Food Isn’t Even From Cuba — or Miami
Tagged
Food + Drink
What did you think of this story?
Meh
Good
Awesome