I was walking through the aisles of a supermarket in Mexico City a few days ago when a couple rubber masks caught my attention. They weren’t the usual Halloween masks. The masks represented Catrinas, one of the most recognized Day of the Dead icons. All good, I thought! Mexican traditions finding new opportunities to compete with the overwhelming popularity of Halloween! Then I read the tag. “Halloween night. Bring your Day of the Dead to life.” I suddenly noticed something that’s becoming very evident all around Mexico. Both festivities aren’t just merging in latex paraphernalia, this is a sign of a new syncretism that might end up with a new kind of celebration. A more globalized, more festive kind of Día de Muertos. 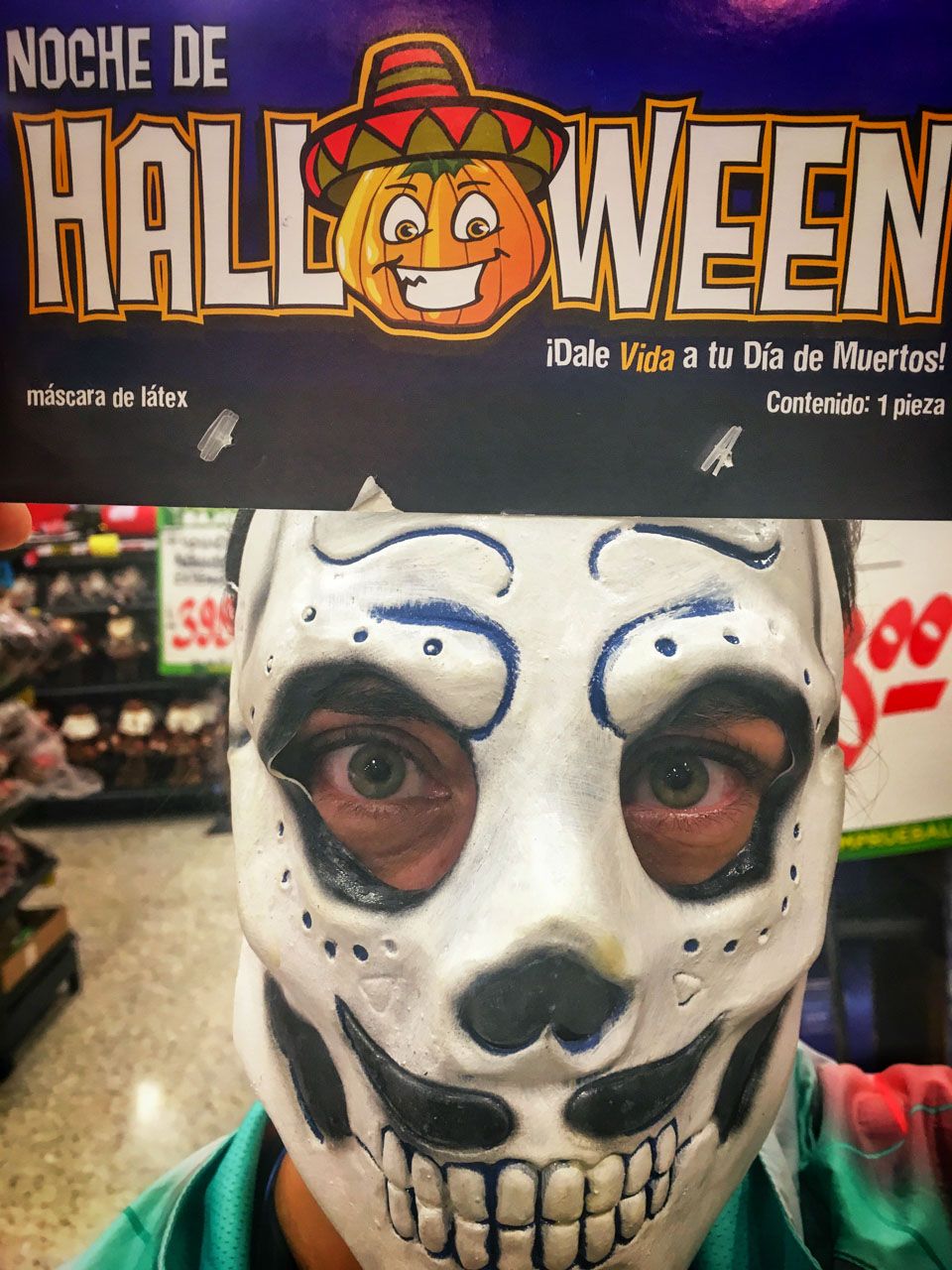 Day of the Dead has changed a lot in my lifetime, and the huge international phenomenon it has become in recent years might be playing an important role in that matter. When I was a little boy, I considered Day of the Dead to be a private or personal kind of festivity. In my case, it was all about setting up the altar with my family, thinking about all the elements that were going to be present, who it was being dedicated to, and having a special dinner with pan de muerto, and the symbolic presence of the departed, embodied by the smell of marigold, incense, and burning candles. Everywhere around Mexico, people did the same thing. Some in their homes, others participating in collective vigils in cemeteries.

Of course, there was also Halloween. As a child, that was the fun part of this time of the year. Asking for calaverita — the Mexican version of trick-or-treating –, the costume parties, the specials on tv, and the variety of candy you could only get around this date, made this one of my favorite festivities. I don’t remember ever mixing Halloween and Day of the Dead. How could I? How could anyone? Both seemed completely different at their core. And yes, I know Halloween has a deeper meaning if you really dig into it, but as a commercialized holiday — the only way it’s interpreted in Mexico — it means little more than candies, costumes, parties, and pumpkin spice flavors everywhere around.

Nowadays, Day of the Dead has a completely different vibe to it. Catrinas have taken over ofrendas (the traditional altars) as the emblem of the celebration, yearly parades are organized in cities and small towns all around Mexico, and the popularity of places like Mixquic, Michoacan, and Oaxaca attracts thousands of tourists from all around the world. The celebration has become more public and through this, it has lost an essential part. The remembrance of the departed, and the bittersweetness that comes with it are nowhere to be seen in the parades and costume contests, and it’s definitely harder to find them in cemeteries where there are more tourists and opportunity vendors than actual locals. It’s not that Halloween’s taking over Day of the Dead, it’s that Day of the Dead is looking a little bit more like Halloween with every passing year. 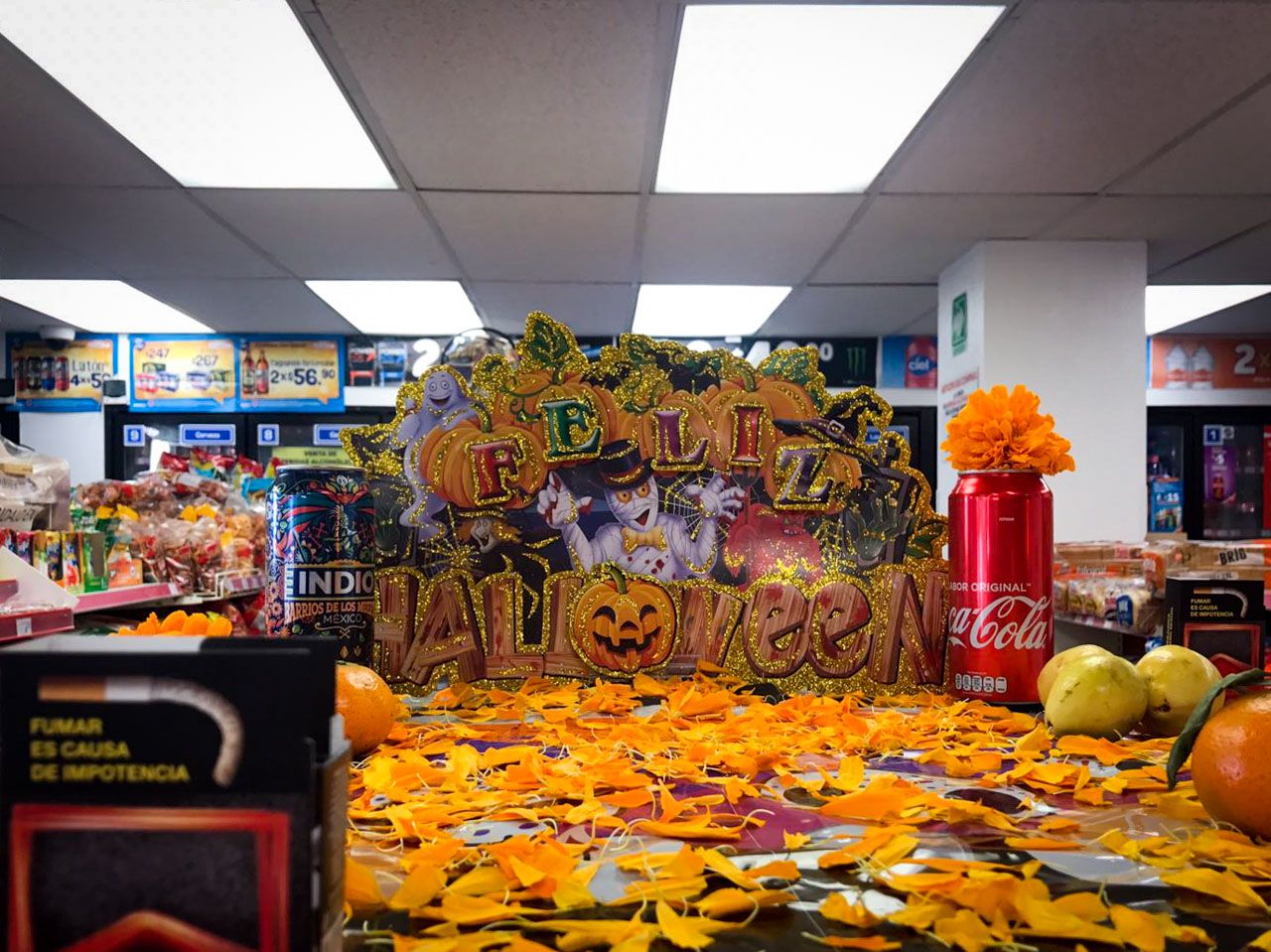 Not even sure what this is supposed to mean. Photo: Diana Guzmán

The poorly labeled mask and the altar of a Mexican convenience store depicted above are not the sources of the problem, they’re merely symptoms. Symptoms of a celebration that’s changing its vigils for pan de muerto all year long and its sorrow for parades. The old Day of the Dead can be found unchanged in most Mexican households where altars are still carefully prepared and maintained. Maybe we can maintain it this way, but the trend shows that this personal, insightful side of the celebration is slowly becoming just a part of the tradition and no longer its core. Only time will tell how this will evolve, and how it will affect the way Mexicans celebrate both festivities.

Day of the Dead has always been a festivity with deep meanings. It’s all about acknowledging our mortality and about remembrance. Maybe that doesn’t sound as much fun, but it helps every one of us in the process of letting go and accepting our role on this earth as transient. That kind of insight doesn’t come with parties and costumes.

Feliz Día de Muertos and happy Halloween. Let’s keep celebrating them both as long as we can!

Tagged
Holidays Mexico
What did you think of this story?
Meh
Good
Awesome