Witnessing displays of bioluminescence is often a happy accident. You’re vacationing at a lovely coastal location, taking an evening stroll along the beach when you suddenly witness the rare, ethereal phenomenon of glowing blue waters. Being lucky enough to see bioluminescence is like adding chocolate to an already delicious strawberry — but it doesn’t have to be all luck. Although bioluminescence might look magical, it’s actually a biological phenomenon you can plan ahead to see, so witnessing it isn’t a roll of the dice.

The light is produced by energy released from chemical reactions inside various organisms, from fireflies to sharks, for the purpose of confusing predators or attracting prey. When enough organisms emit this light in an area, it gives the environment an enchanting glow. Displays of bioluminescence are never a guarantee, but if you know where to look, you can greatly increase your odds of seeing the elusive, magical illumination. From Japan to Puerto Rico, these are the best places around the world to spot dazzling bioluminescence.

The glowing blue waters of Toyama Bay, Japan, might look inviting — before you realize they’re full of squid. About three hours east of Tokyo, Toyama Bay has some of the most breathtaking bioluminescence in Asia. And it’s all thanks to the aptly named firefly squid. Firefly squid live in the waters of Toyama Bay from March to June every year, during their breeding season. During this time they certainly live up to the “firefly” name, emitting a bluish glow that bathes the ocean in an otherworldly light.

Thankfully, Mosquito Bay isn’t known for its abundance of mosquitoes, but rather for having some of the best bioluminescence in the world. Named the world’s brightest bioluminescence by the Guinness Book of World Records, Mosquito Bay has one of the highest concentrations of plankton in the world, resulting in the blazing display of emitted light. Located on the southern shore of Puerto Rico’s Vieques Island, the bay’s resident plankton emit a bright blue light when disturbed, producing phosphorescence as a defense mechanism. The best way to visit Mosquito Bay is with a local boat tour operator.

The bioluminescence off the coast of Taiwan’s Matsu Islands is attributed to a glowing algae called noctiluca scintillans, which emits a blue light when disturbed. This phenomenon just off the islands’ shore is so distinctive that it’s commonly referred to as the “blue tears,” as the cluster of light resembles dozens of blue teardrops floating in the water. The light is mainly visible between April and August when the algae are most active.

The Luminous Lagoon certainly lives up to its name. Just five minutes from the docks of Falmouth, on Jamaica’s north coast, the lagoon is the best place on the island to witness bioluminescence. Microorganisms called dinoflagellates inhabit these waters and glow particularly brightly in the shallow, warm water. When the water is disturbed the organisms produce a bluish-green glow, revealing luminous outlines of fish and other objects beneath the surface. Boat tours depart every night, and they even let you jump in the water and take a swim surrounded by the glow. 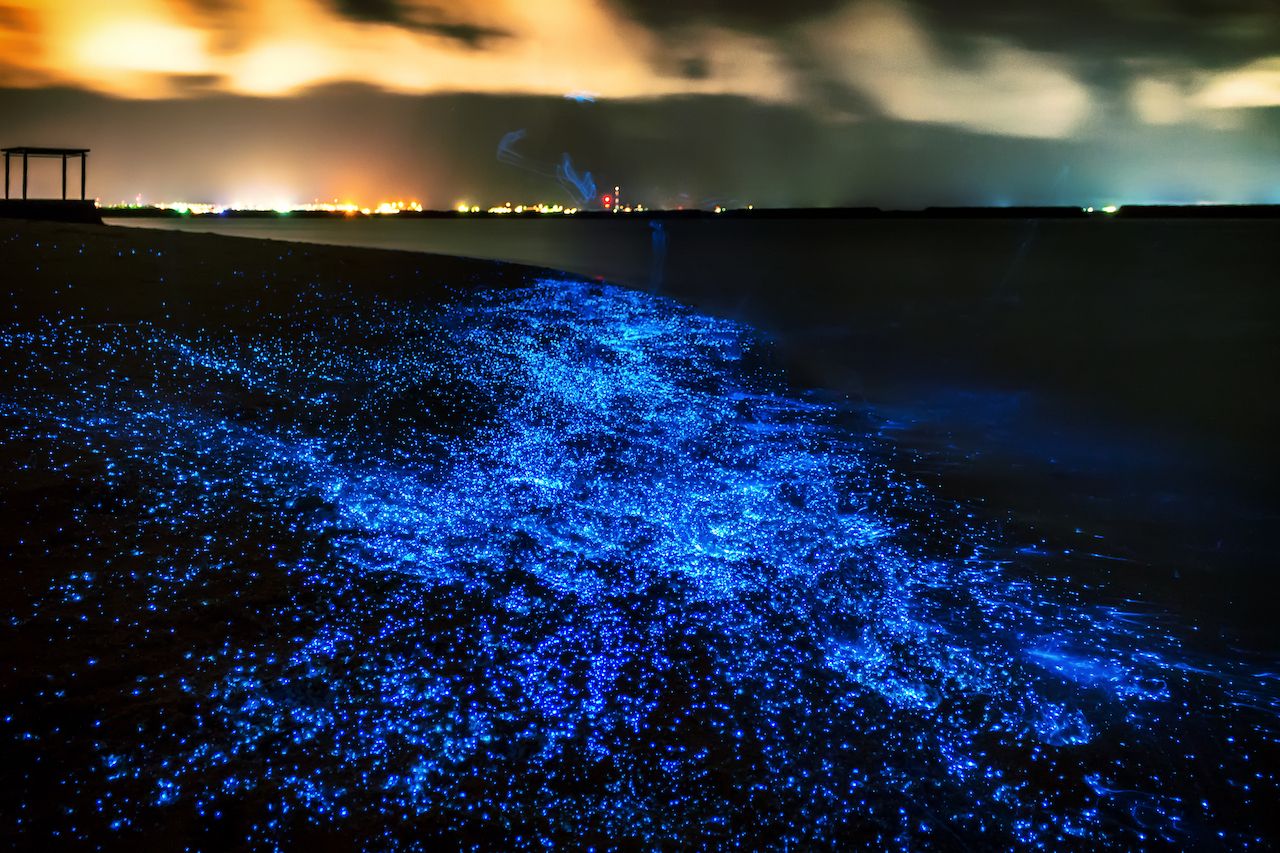 People don’t exactly need the lure of bioluminescence to be convinced to visit the Maldives. This island nation in the Indian Ocean is famous for its clear waters, overwater huts, and pristine beaches. Thankfully, one of the Maldives’ most stunning sights isn’t usually obstructed by hordes of Instagram models. On Mudhdhoo Island, the bioluminescence isn’t confined to a single cluster of sparkling plankton, as is usually the case, but spreads across a vast portion of the shore. The effect is produced by ostracod crustaceans (or seed shrimp), which emit light for a longer period of time than most organisms. Thanks to these glowing ostracods, an evening seaside stroll is nothing short of magical. 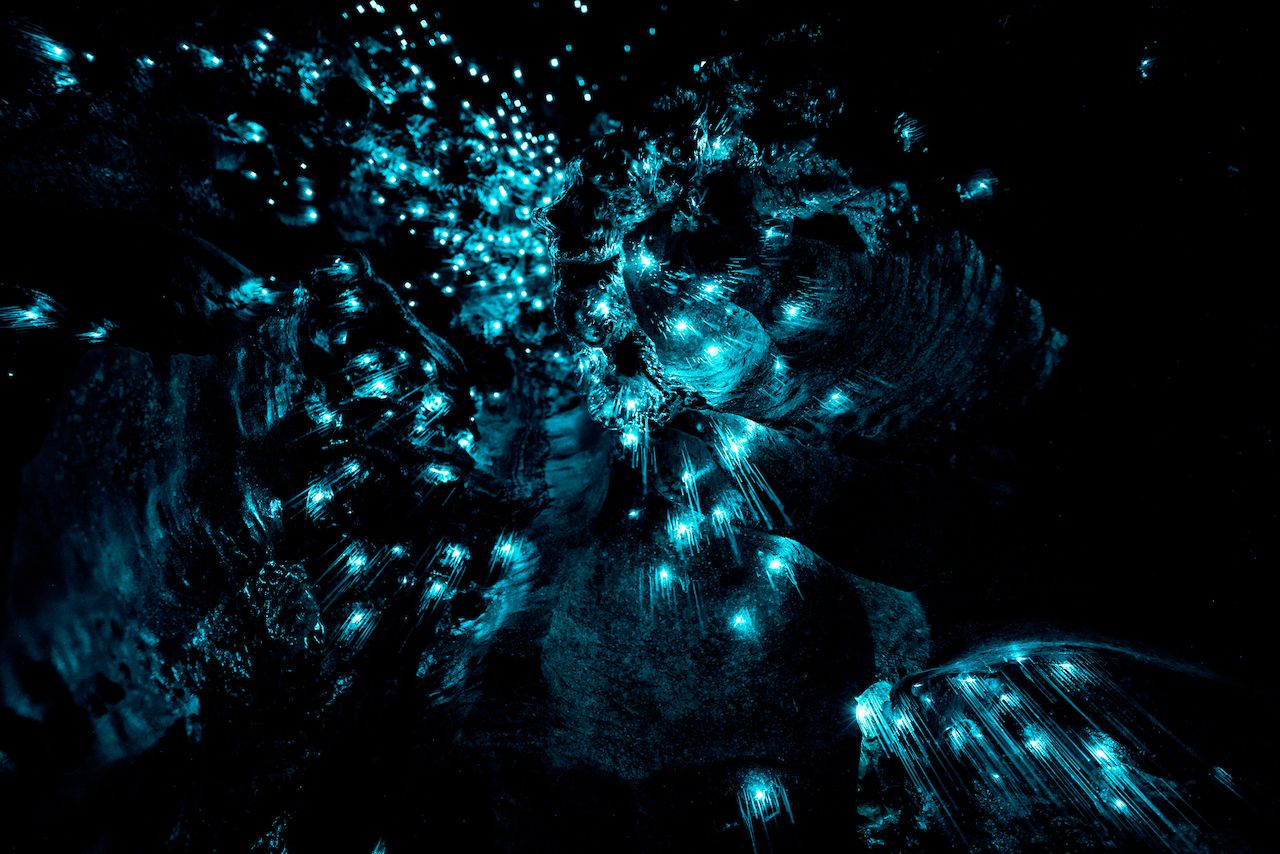 New Zealand’s Waitomo Caves stand apart from other bioluminescent phenomena around the world. Rather than being an aquatic-based glow effect, the unique light in the Waitomo Caves is produced by thousands of glow worms called Arachnocampa luminosa — a species found only in New Zealand. There are three caves to be explored here, but the Glowworm Cave is undoubtedly the most famous and dazzling. In this cave you will take a boat ride through glowworm grotto, but rather than look down at the water, you’ll be staring at the stalactites above, illuminated by an army of glowworms. The caves can be found on the North Island, about 2.5 hours south of Auckland. 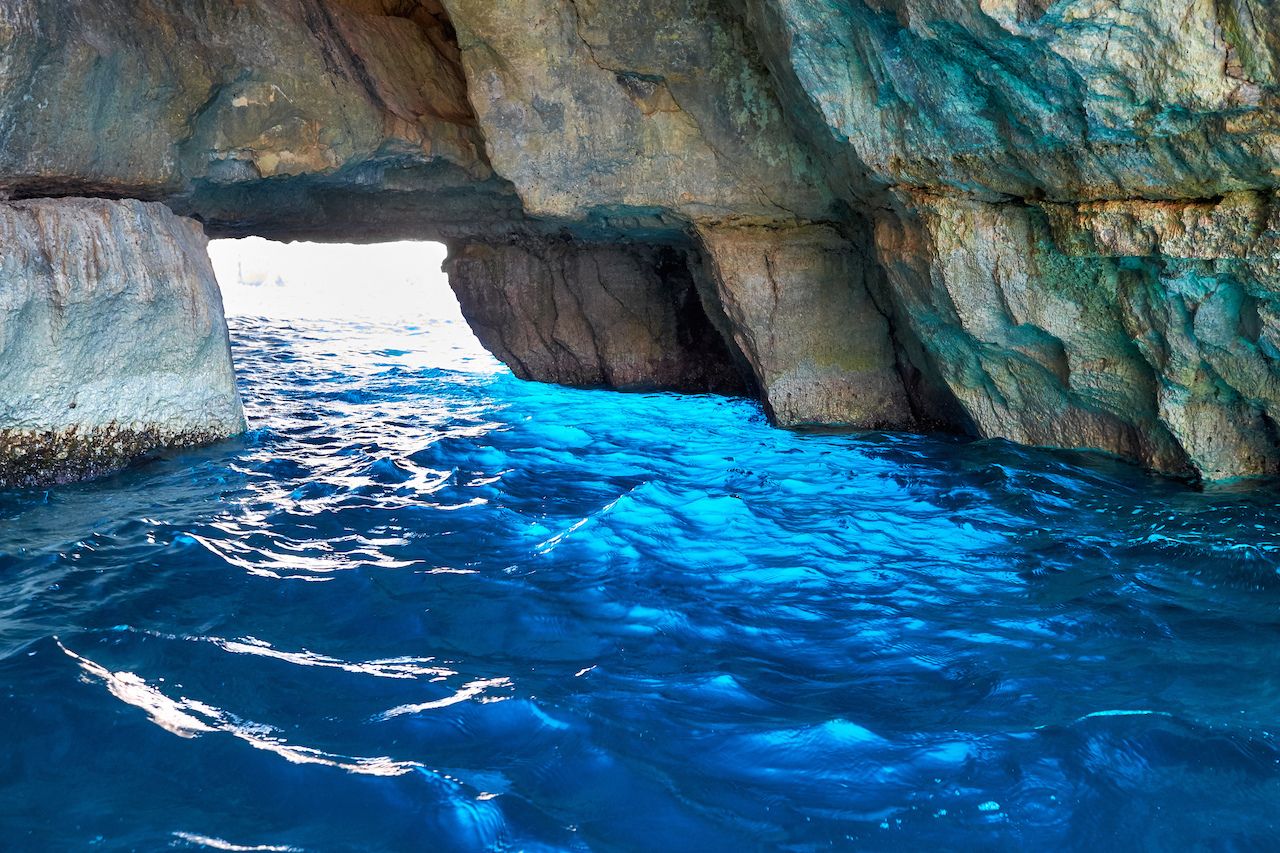 Sometimes you don’t need sea creatures to create an awesome blue glow but rather the right topographic conditions — namely, a sea cave. In Malta, a small island nation off the coast of Italy, the Blue Grotto will deliver a healthy dose of blue. An oceanic cave near the town of Wied iz-Zurrieq, the Blue Grotto is marked by distinctively blue, glowing water with objects underneath the water appearing silver, red, orange, or yellow. Although the blue phenomenon is the result of sunlight shining through the narrow entrance, rather than bioluminescence, the radiant effect is equally stunning and even more colorful. To reach the grotto, you must visit during low tide and calm conditions, and only via a specially licensed boat.

Art + ArchitectureThe 9 most colorful towns around the world you’ve never heard of
Tagged
Beaches and Islands
What did you think of this story?
Meh
Good
Awesome

Unplug from the world on the Greek island of Gavdos, Europe’s southernmost point