Visionary and ingenuous artistry has made Denmark a torchbearer for design and architecture innovations. Danish architects have left their mark around the world. From Jørn Utzon’s iconic Sydney Opera House, to Henning Larsen’s Harpa Concert Hall in Reykjavik, to the recent Icefjord Center in Greenland by Dorte Mandrup, each design is a testimony to Danish architecture’s cutting edge style and practical functionality.

But to experience the gamut of Denmark’s architectural and urban design masterpieces, you do not have to venture farther than Copenhagen, the capital city and a few more of its neighbors. Here are 10 of Denmark’s most famous and iconic buildings that are worth seeing. 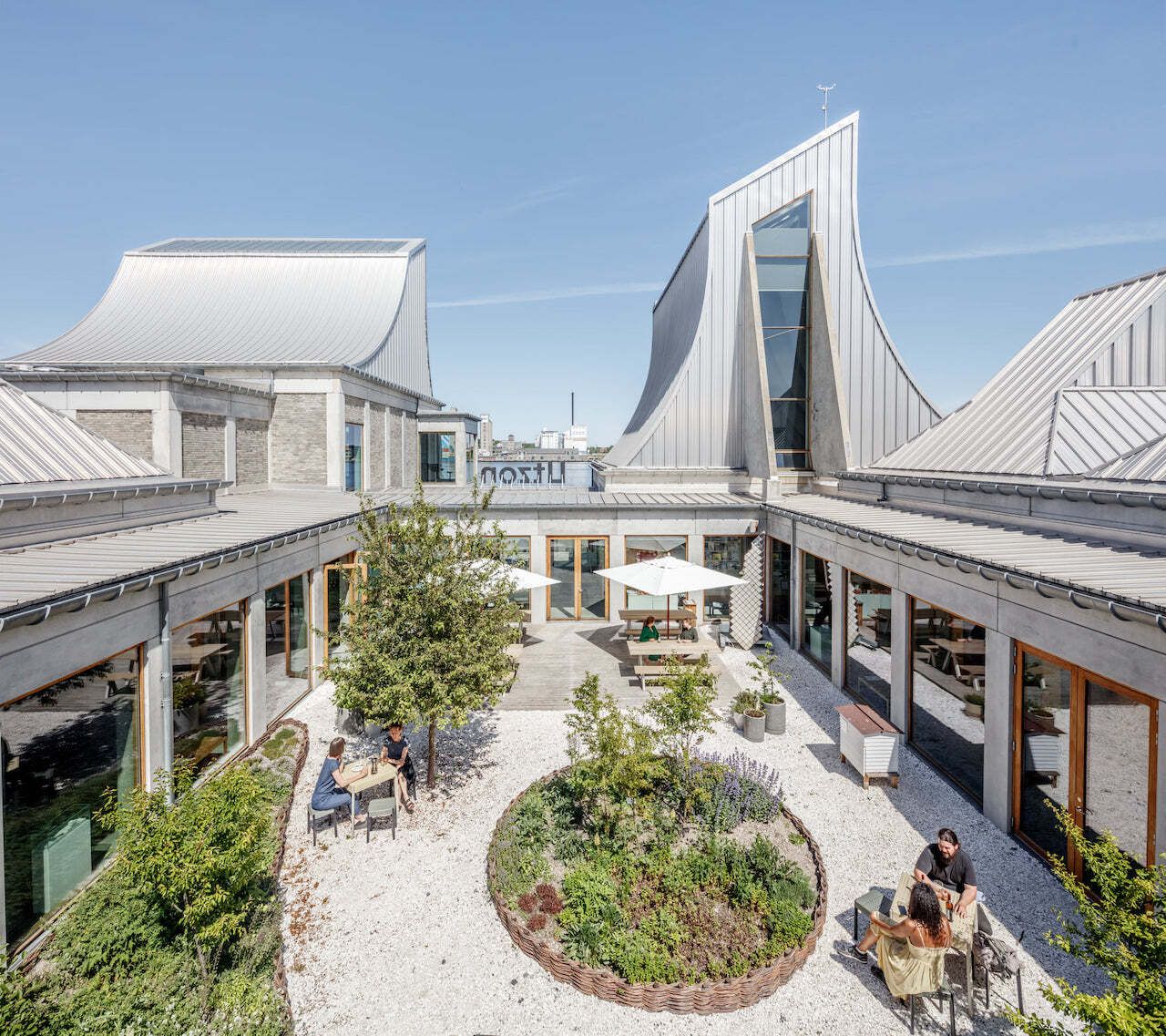 The last building to be designed by Pritzker Prize winner Jørn Utzon who’s most noted as the architect of Sydney Opera House in Australia, the Utzon Center was a collaboration with his son Kim Utzon. The Utzon Center, inaugurated the year that Utzon died in 2008, is in the city where he grew up. Jørn Utzon envisioned the center as a cultural spot, rather than as a museum, where people of all ages and not just architects or students could access the knowledge of architecture and design.

The buildings of the center grace the revitalized waterfront of Aalborg. They overlook the Lim Fjord with striking and highly reflective curved rooftops, reminding visitors of sailing ships and shipyards, Aalborg’s main industry and the inspiration behind the design. The interior courtyards, a part of which forms the outdoor restaurant area, channel Middle Eastern and Mediterranean styles. 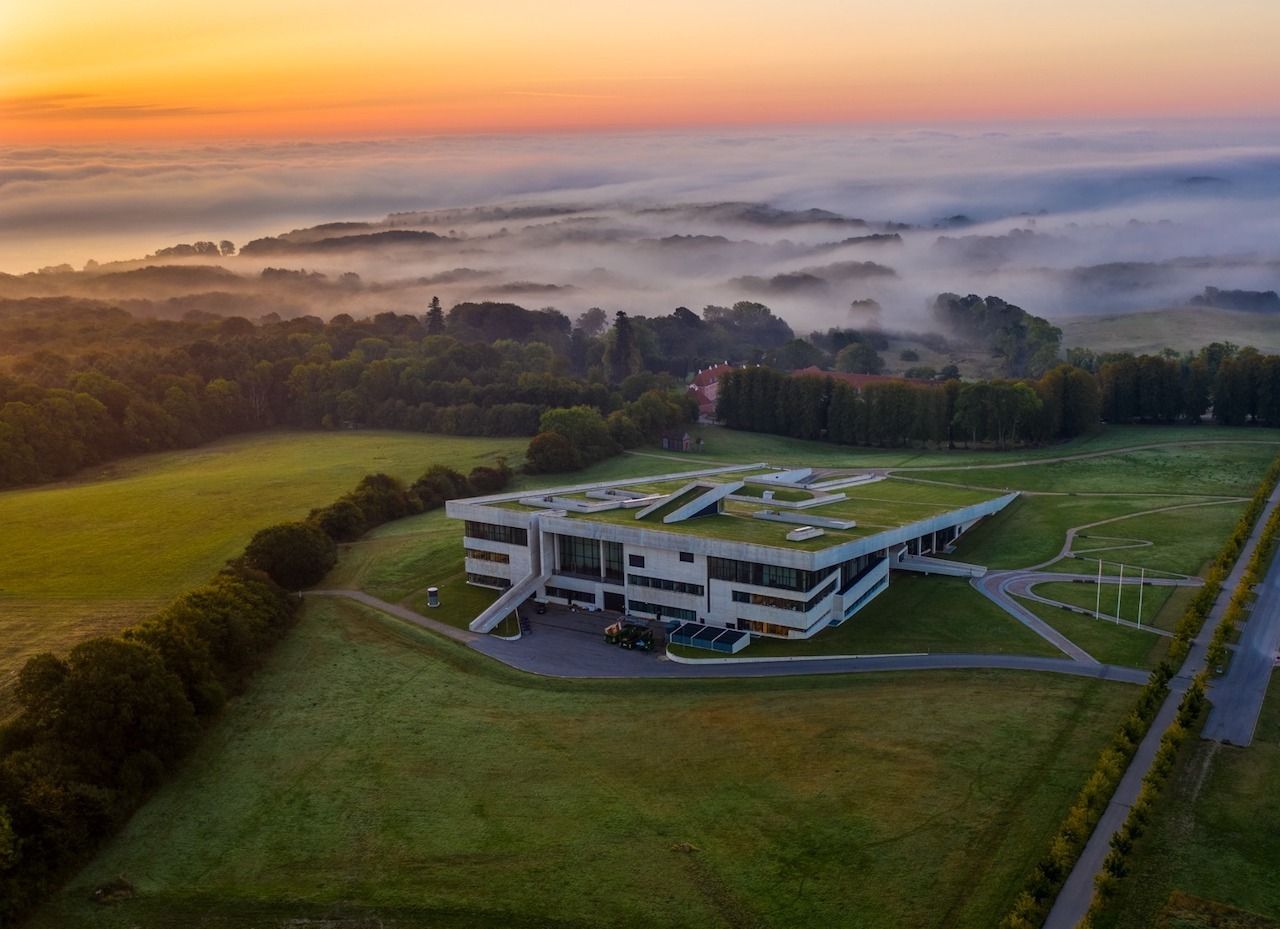 A cultural history museum of archaeology and ethnography, the Moesgaard Museum in Aarhus stands out for its open-air design. Set amid a stunning landscape of woodlands and forests, overlooking the Bay of Aarhus, this almost Brutalist structure that’s softened by a grass, moss, and wildflower-covered rooftop was designed by Henning Larsen Architects.

Originally located in the historic Moesgaard Manor and still a part of the site, the new museum, which opened in 2014, forgoes the archaic narrative of box-like museums and instead places the building as part of the surrounding landscape where the gently sloping green roof is open to visitors all year round. The exhibition halls, bookshop, cafe, conference halls and auditorium are all arranged in split level forms, spread out over underground levels, mimicking for visitors a trip to an archaeological dig. 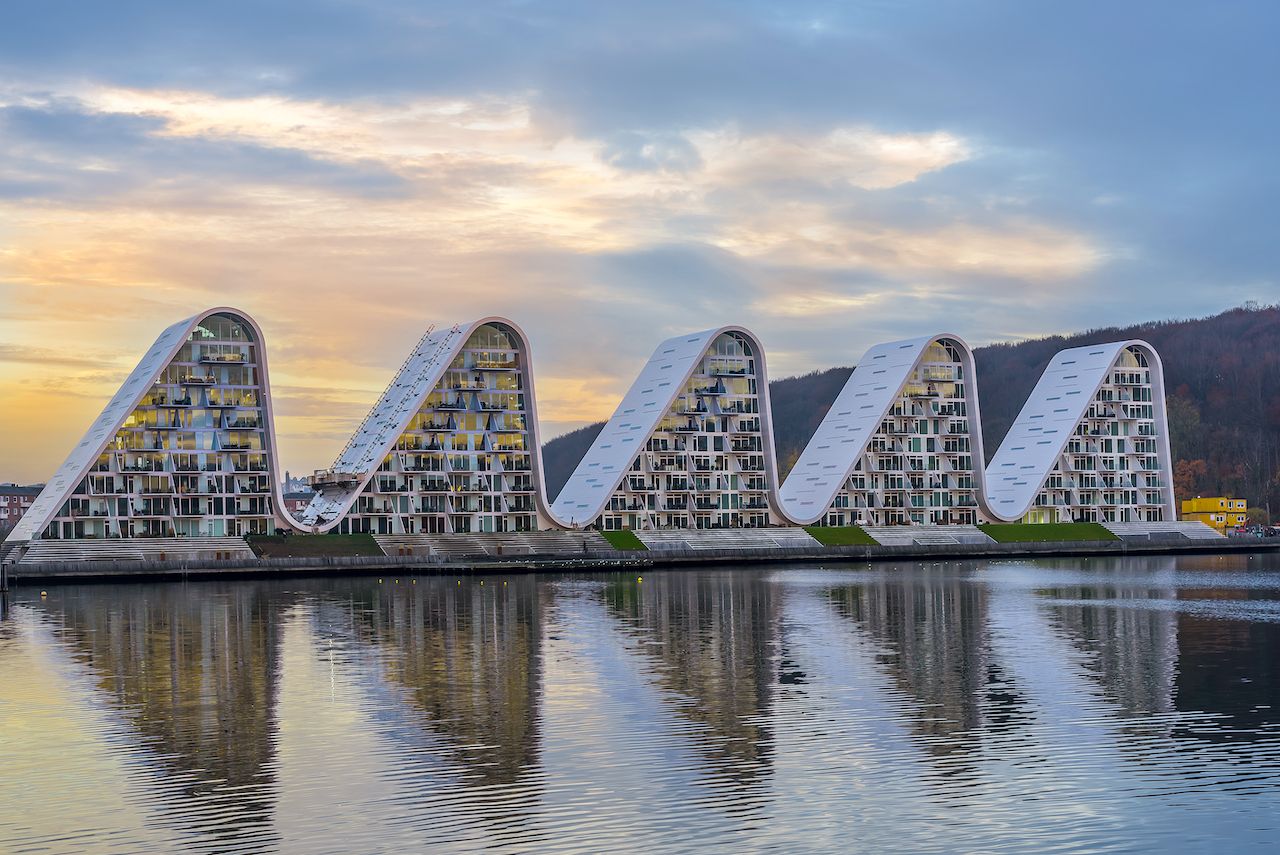 Vejle, a town located in the Jutland Peninsula at the head of the Vejle Fjord, is particularly scenic thanks to its rolling hills and magnificent waterfront by the Bay of Skyttehusbugten. In 2006, Henning Larsen Architects began constructing a 100-apartment and 151,000 square-foot residential complex on the waterfront along Vejle Inlet. Their architectural vision of five consecutive wave-shaped towers was interrupted by the global recession of 2008, and construction came to a halt after the completion of two towers in 2009. The remaining three towers were completed in 2018 by the firm, after the passing of Larsen in 2013. Today the five towers of The Wave stand as an architectural tribute to the Vejle landscape.

Each wave reaches nine stories and has 20 apartments, with the largest ones on the top floor. The sculpture-like complex incorporates its residential zone with the public pier on the waterfront, making it an instant icon of Danish style. 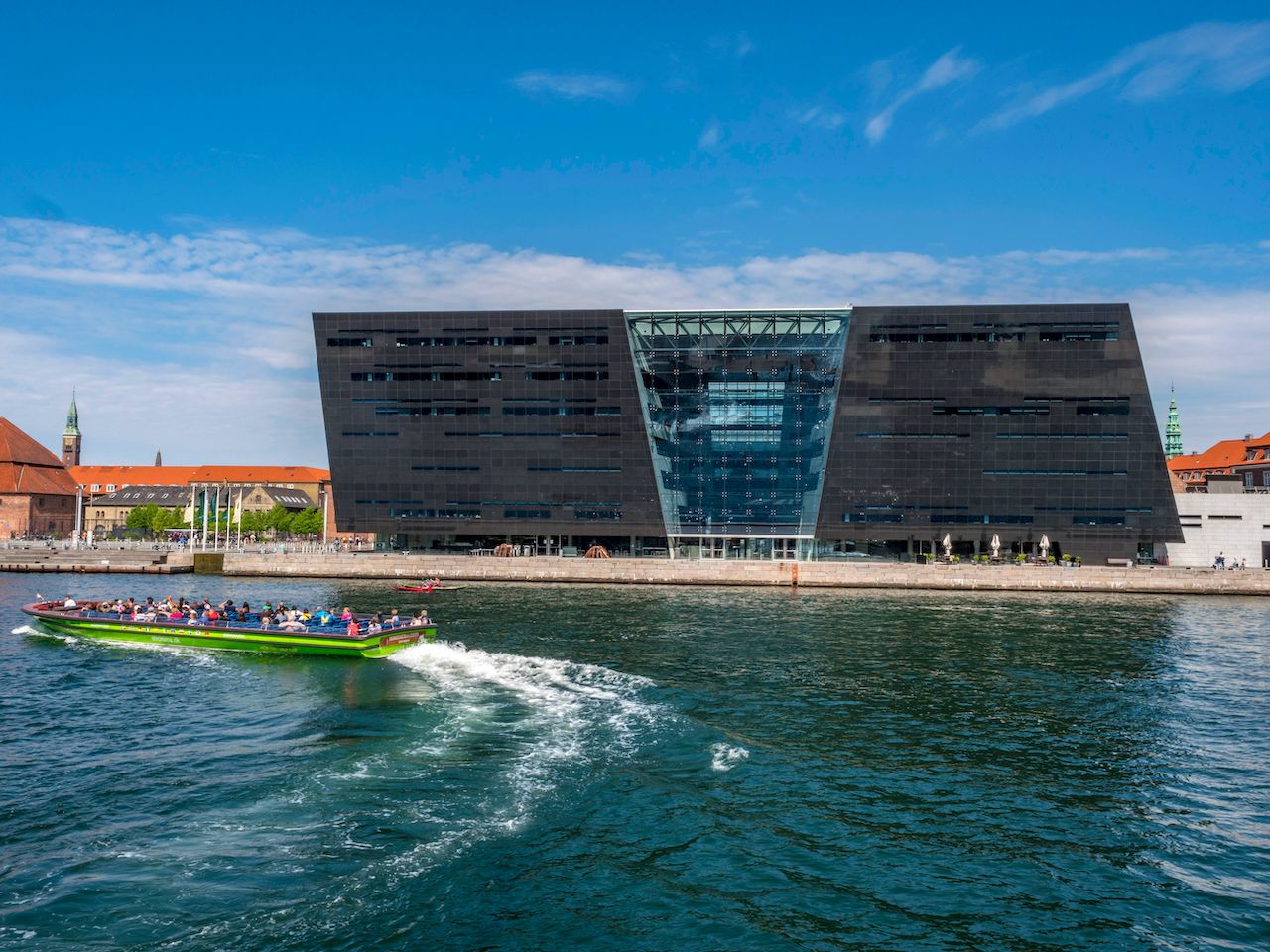 The Royal Library, which is the national library of Denmark, was founded in 1648 by Frederick III, the king of Denmark and Norway. Situated in Slotsholmen, an island in Copenhagen harbor, the library is set among the notable National Archives and the glorious Christiansborg Palace, the seat of the Danish Parliament, the Prime Minister’s Office, and the Supreme Court.

In 1999, a modern extension created by Schmidt Hammer Lassen Architects was added to the old building of the Library, which resulted in a striking architectural landmark on the Copenhagen waterfront.
The Black Diamond, called as such because of its polished black granite exterior and irregular angles, is an expansive cube cleaved into two slightly tilted parts by a soaring, glazed atrium offering stunning views of the sea and sky beyond. Along with serving library purposes, it is home to the National Museum of Photography, exhibition halls, a bookshop, a roof terrace, a cafe and restaurant, and a concert hall and theater that seats 600. Visitors can traverse between the old and new buildings using one of the three glass-enclosed bridges that connect the Black Diamond with the Royal Library to experience the impactful blend of historic and modern architecture.

A mere 45-minute train ride from Copenhagen lies the coastal town of Helsingor on the island of Zealand. The town is known for its 15th-century Kronborg Castle, immortalized as Elsinore Castle in William Shakespeare’s “Hamlet.” As it was housed since 1915 in the castle, a relocation was planned for the maritime museum. Bjarke Ingels of BiG architects had the unique task of creating a building that would not impinge on the views of Kronborg Castle, designated a UNESCO World Heritage Site in 2000.

The design by the Bjarke Ingels Group placed the M/S Maritime Museum of Denmark below ground and within the walls of an old, ship-shaped dry dock. A stone’s throw distance away from the imposing castle ramparts, and next to The Culture Yard, Helsingor’s other architectural marvel, the museum which welcomed the public in 2013, is invisible as one approaches it. Visitors navigate sloping bridges to descend 23 feet into the depths of the building to view exhibitions and events about Denmark’s 600-year maritime past. Although entirely underground, it is Denmark’s tallest museum. 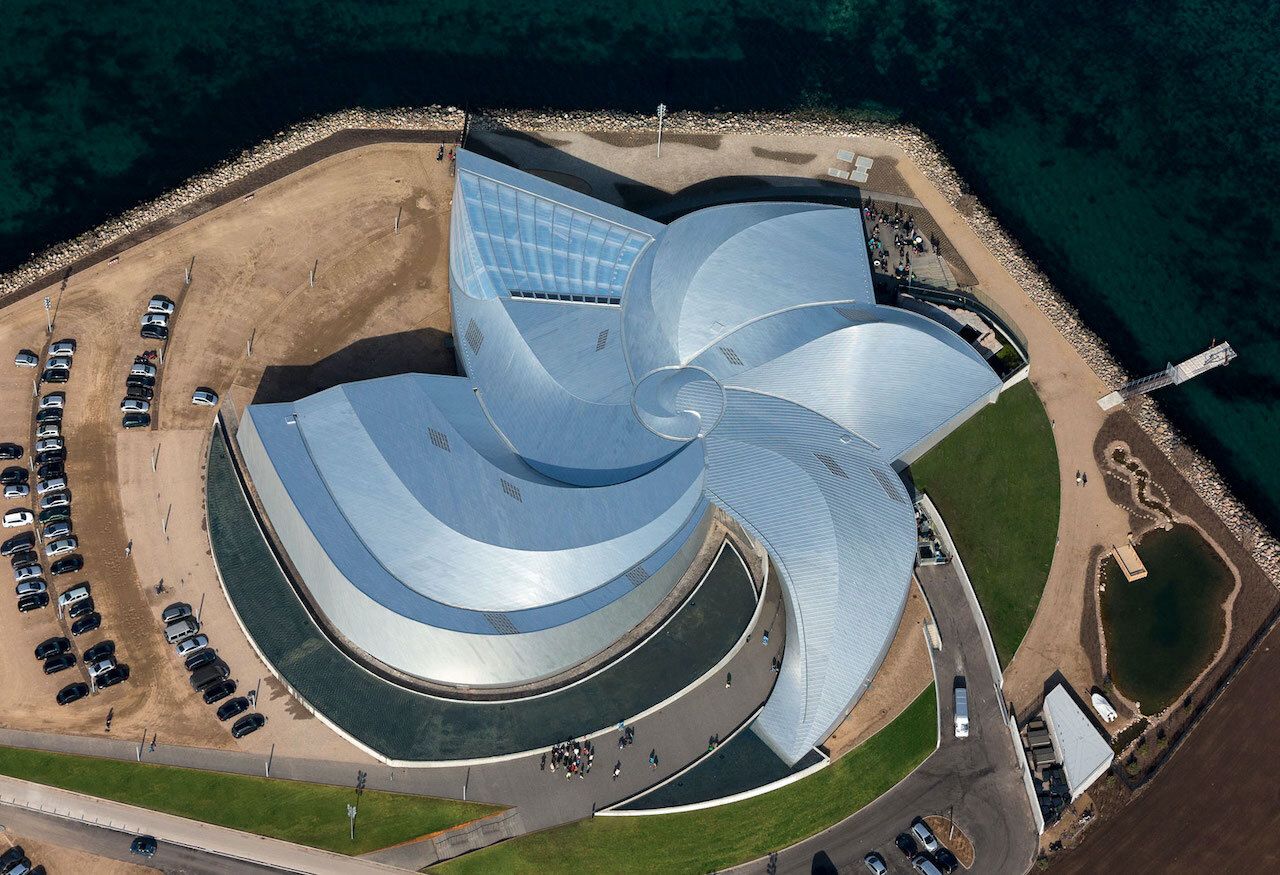 While the creatures that inhabit aquariums are usually spectacular, the buildings themselves mostly fall short of the mark. But that is certainly not true of the National Aquarium Denmark. It was first established as Denmark’s Aquarium in 1939 and delighted visitors for more than 73 years. By the mid-1990s it became clear that despite many extensions, Denmark needed a new venue for the aquarium.

After winning an international competition, architectural firm 3XN designed the present premises of Den Blå Planet on the shores of the Øresund in Kastrup. The aquarium opened its doors to the public in 2013. Inside there are sea creatures that live in 53 aquariums that contain a total of 1.85 million gallons of water. The architecture takes its cue from a whirlpool and is shaped like a spiraling star with five arms. The center of the structure is the entrance hall from where visitors can fan out into each of the arms. Clad in aluminum, with a fish-scale pattern on its facade and surrounded by a reflecting pool, the building creates the theme of an aquarium through its concept and form. 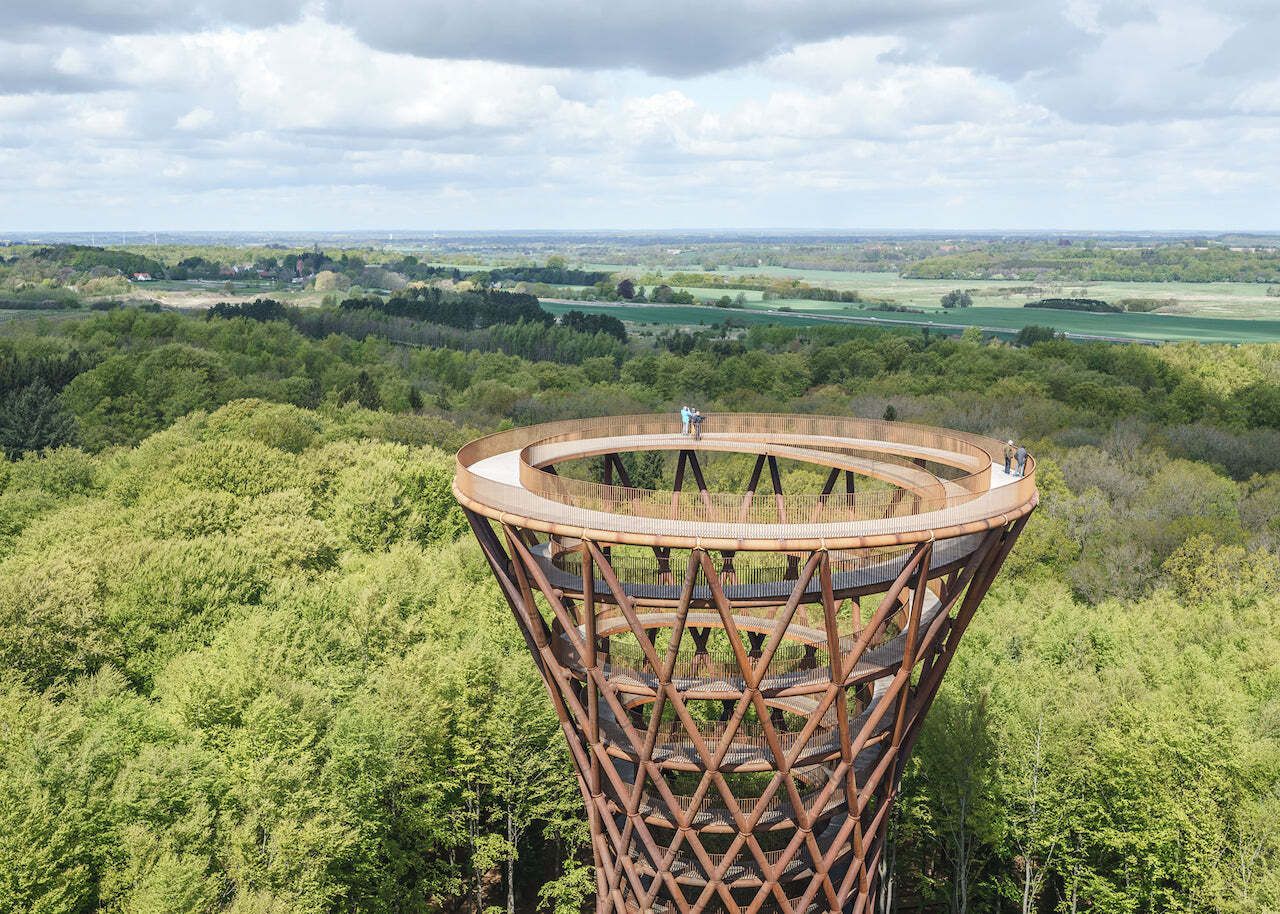 The Gisselfeld Klosters Skove, a preserved forest, lies about an hour south of Copenhagen. Situated in the middle of this lush forest is Camp Adventure Park, a go-to destination for nature and camping enthusiasts. There are picnic spots, climbing parks, the longest zip line in Northern Europe, a sauna, luxurious Mongolian yurts for glamping in the park, and even a Renaissance-era castle in the vicinity. But the supreme attraction is a tower.

The Camp Adventure Observation Tower opened in 2019 and is the brainchild of the architectural firm EFFEKT. The structure is accessible to all and offers the unparalleled experience of observing nature from above the tree canopies. The 147-foot tall tower is reached by walking on a two-mile-long boardwalk. Visitors have options to stop and observe the scenery from a number of viewing platforms and an open-air stepped amphitheater before arriving at the entry ramp to the tower. The seamless climb to the top of the helical-shaped weathered steel and oak tower offers panoramic views from every point. 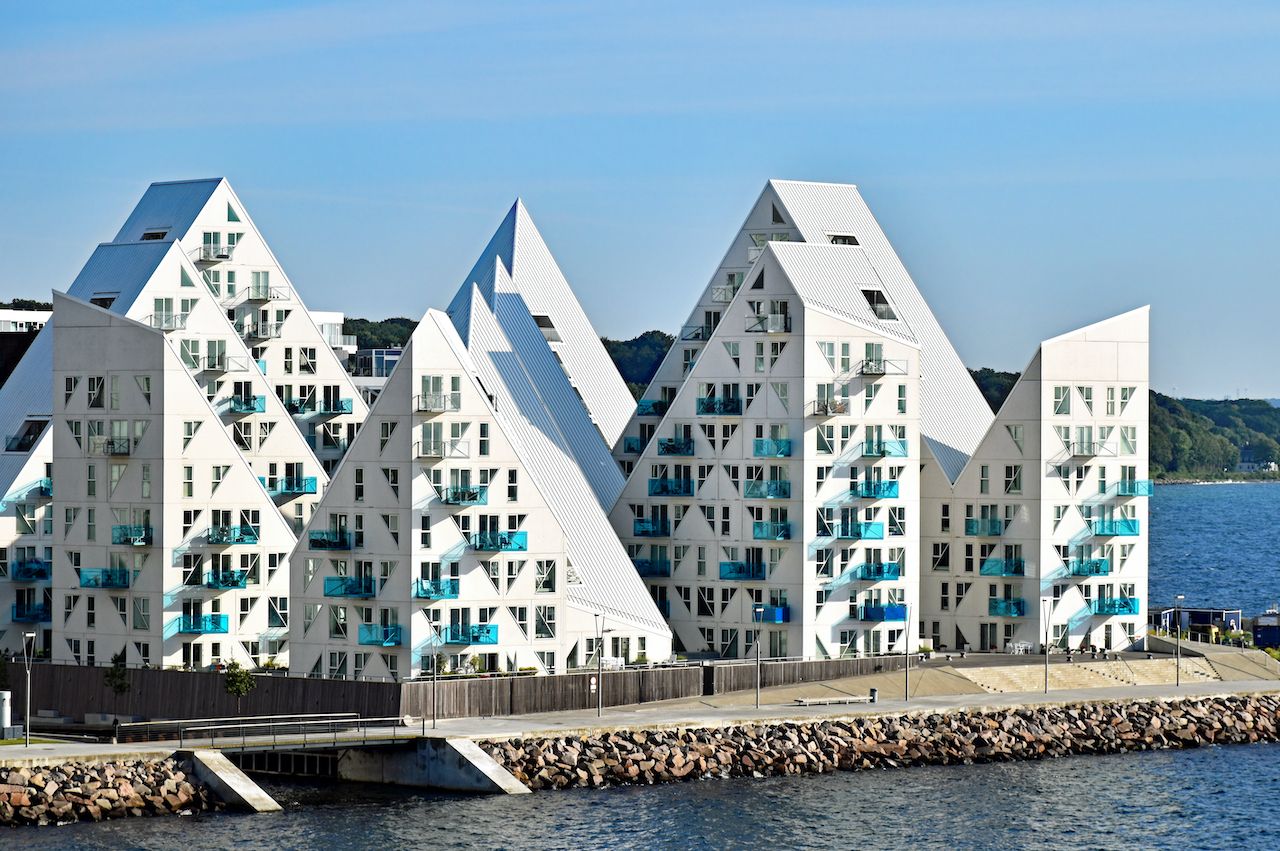 Rising futuristically on the waterfront overlooking the Bay of Aarhus is a building complex that gives new meaning to unconventional architectural design. Aarhus Ø, once an industrial harbor area and a container port, was regenerating as a vibrant neighborhood in 2010. The first project to be completed in 2013 was a residential block consisting of 208 apartments, called Isbjerget or The Iceberg.

Resembling a cluster of floating icebergs, the complex designed by CEBRA and JDS Architects of Denmark, Louis Paillard of France and SeARCH of the Netherlands is a sight to behold. There are four L-shaped buildings composed of single-story apartments, two-story town-houses, and penthouses with the shortest buildings in front and the tallest to the back, which enables all residences to be bathed in sunlight and enjoy views of the bay. 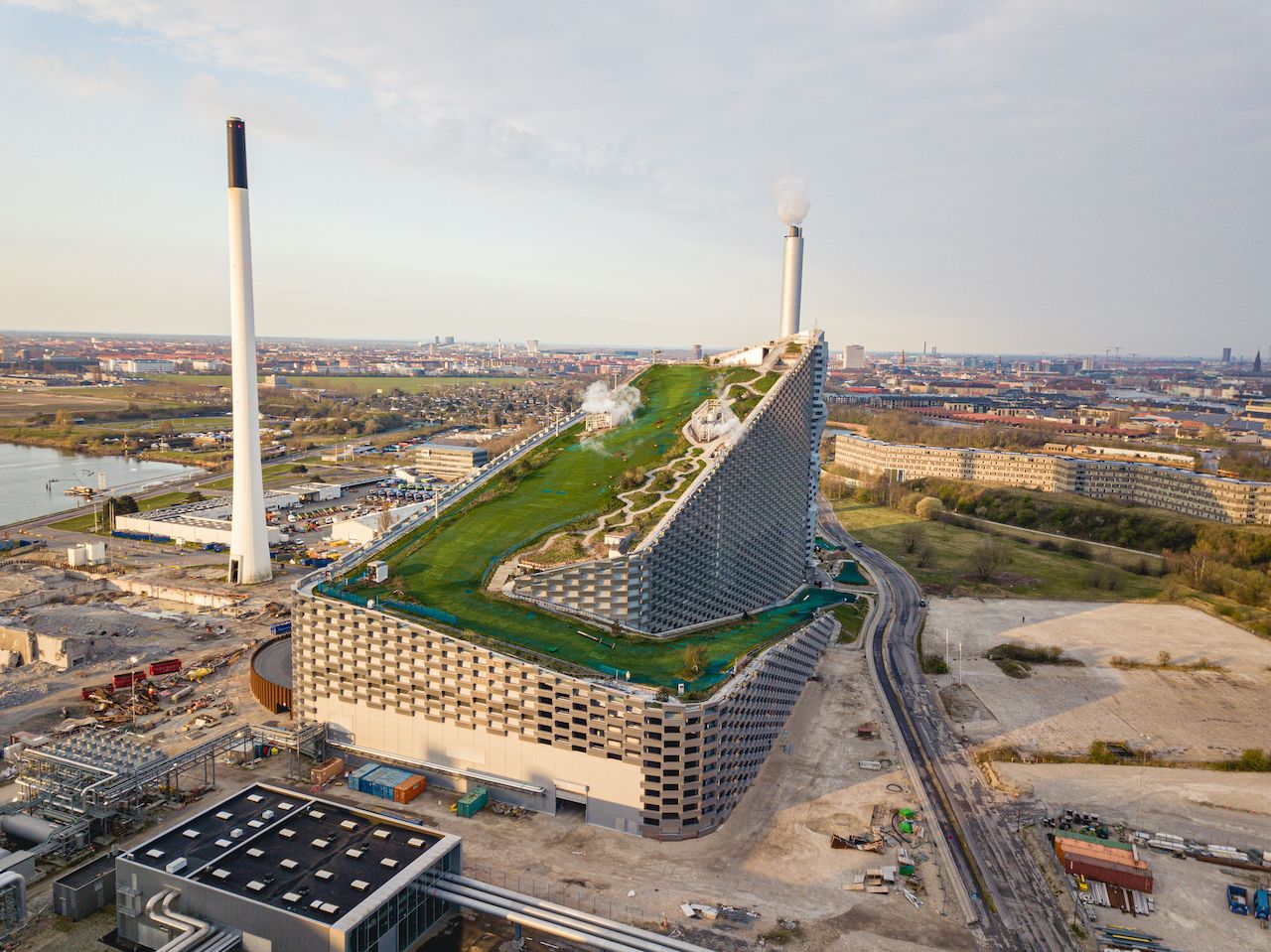 Can a power station belching smoke and gas be a tourist attraction? Architect Bjarke Ingels believed it could be and showed us how it’s done. The Amager Bakke Power Station, located in a former industrial zone of Amager island in Copenhagen, combines public utility and unique fun. Designed by Bjarke Ingels Group and built in 2017, the waste-to-energy plant burns trash in two huge incinerators to produce heat for about 140,000 households. Also, its roof is an artificial ski slope.

SLA has landscaped the 279-foot high, sloping roof of Amager Bakke into a year-round open artificial ski slope covered not with snow, but natural grass that grows through synthetic bristles. Known as Copenhill, it includes a hiking slope, a slalom course, a freestyle park and the world’s tallest climbing wall. At the highest point of Copenhill is a bar that offers spectacular views of Copenhagen, the Øresund bridge, and Sweden. At the base are a restaurant and cafe, a ski school and a ski shop. 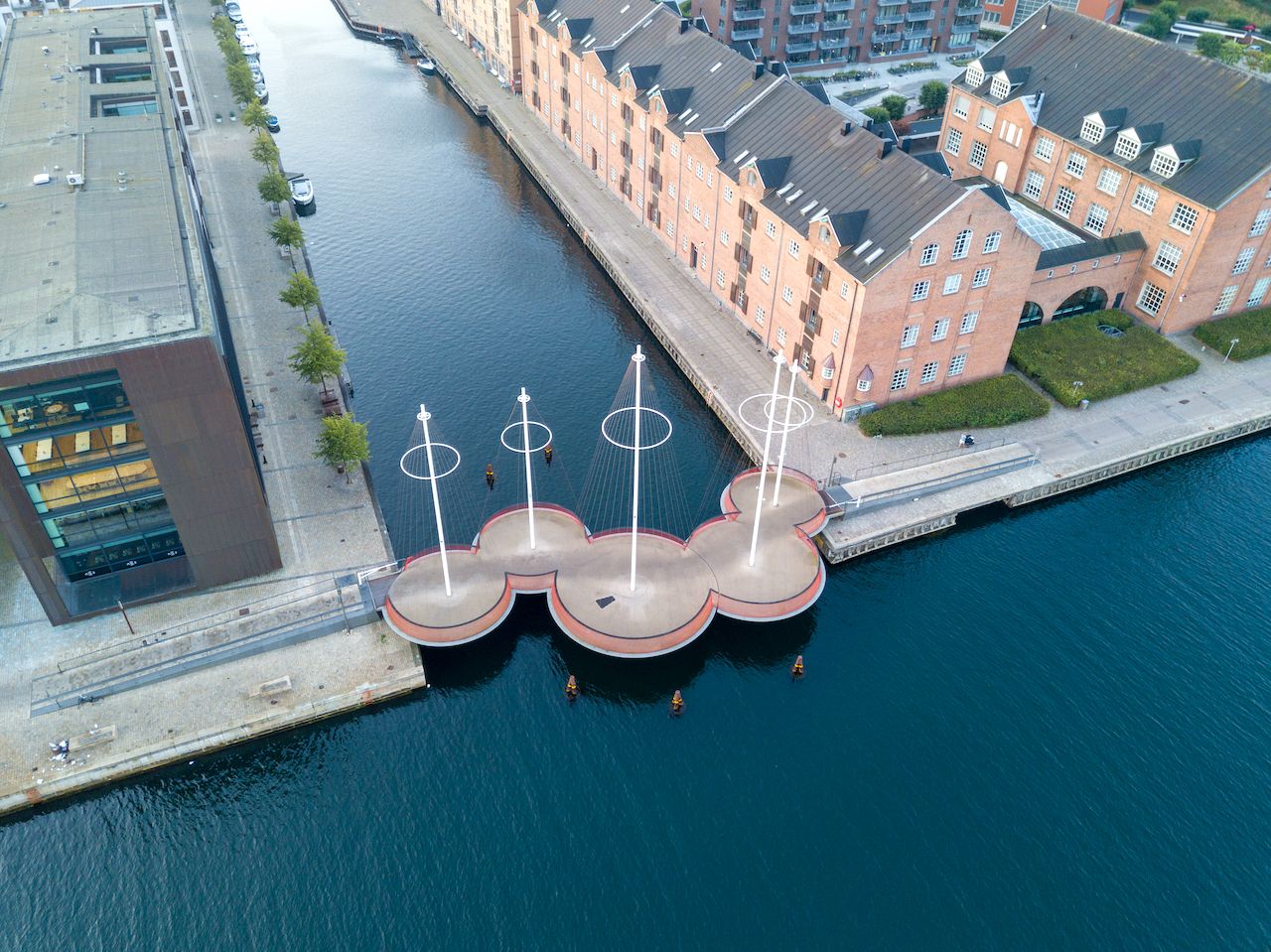 There are 17 biking bridges in Copenhagen, 15 of which were built in the last four years. Many have architectural brilliance — the Belvederbrøen (2016) built by SLA is bright red; the Inderhavnsbro (2016) provides stunning city views; the Cykelslangen (2014) artfully curves over the wharf, separating cyclists above from pedestrians below; while Lille Langbro (2019) is an elegantly curving bridge across the Inner Harbor that opens to let marine traffic through. But the Cirkelbroen or the Circle Bridge deserves special mention.

Designed by Studio Olafur Eliasson, the firm of Danish-Icelandic artist Olafur Eliasson, the Circle Bridge was an instant hit when it opened in 2015. The cable-stayed bridge is comprised of five connected circular platforms of varying sizes with a “mast” on each, paying homage to Copenhagen’s nautical history. Pedestrians and cyclists crossing the bridge over the Christianshavn canal can pause and relax and use the bridge as a “public square,” according to Eliasson. The timber handrail, the inwardly tilted glowing red railings, and the lighting at night all enhance the bridge’s beauty. Part of the bridge glides and pivots open to let larger boats go by.