Bordered by Georgia, Armenia, Russia, Iran, and the Caspian Sea is Azerbaijan, a country most people can’t find on a map, nevermind know anything about its architectural styles. And because it is located in South Caucasus, a region of the world that incorrectly conjures little more than drab Soviet cities, nobody expects Baku, Azerbaijan’s capital city, to have an exciting skyline that could rival the likes of Beijing, Ryad, and London’s.

Baku’s electric urban landscape started with its first oil boom at the end of the 19th century, which brought a large population of immigrants to the nation. Before then, the city was contained within 12th-century fortress walls — a part of the Azerbaijani capital that is still standing today. After the Bolsheviks took over in the early 1920s, the lavish residences of oil barons were replaced by structures that were better aligned with the socialist ideology. But when the country gained independence in 1991, a second oil boom transformed the city again, and Baku modernized and expanded towards the sky.

As a result of its tumultuous history, the capital of the former Soviet Republic combines pastel-colored neoclassical facades with shiny skyscrapers and remnants of its long-gone Zoroastrian tradition. If, on the one hand, the UNESCO-listed Maidan tower reflects the city’s pre-islamic past, on the other the glistening Flame Towers leave no doubt about the demise of the socialist utopia. Sure, the nostalgic can always take a train ride to see the magnificent metro stations built in the late ‘60s, but make sure you don’t spend too much time underground — there’s plenty of head-turning constructions above the surface. Here are six of the most intriguing modern pieces of architecture in Azerbaijan’s capital city. 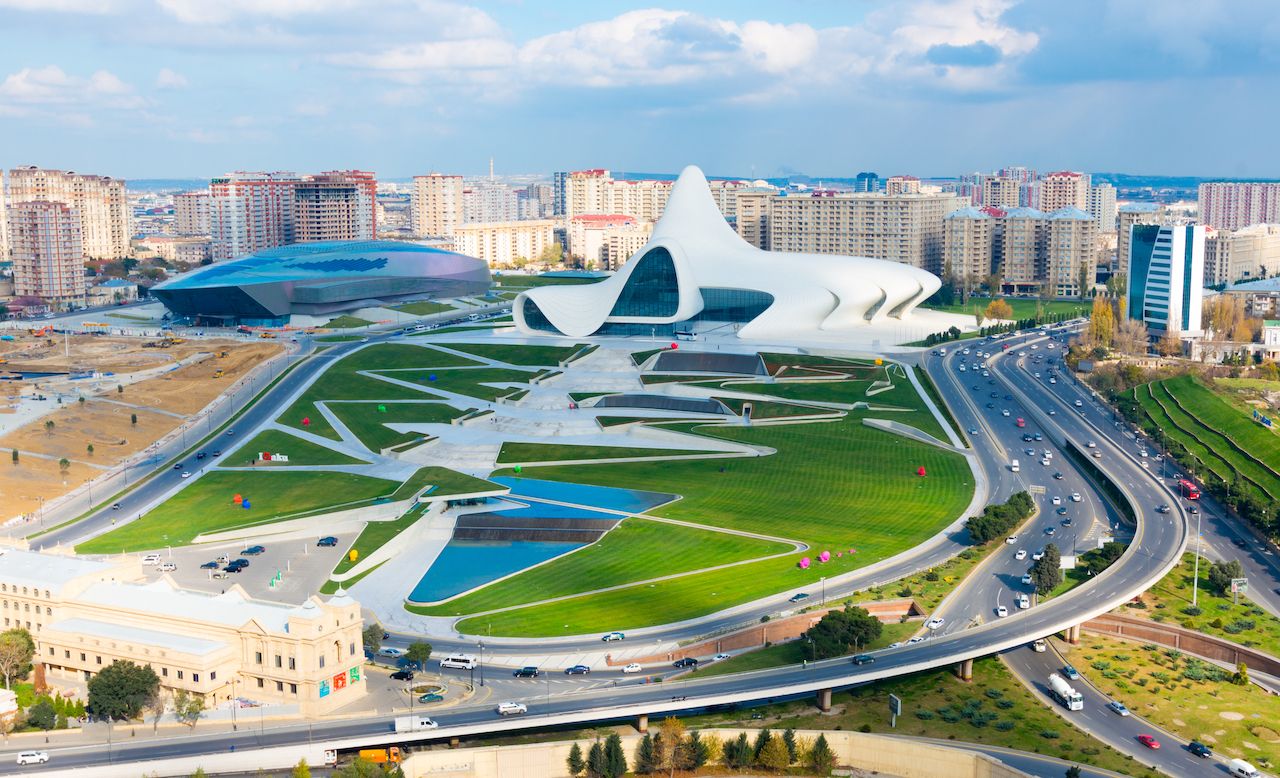 Baku’s enormous cultural center is not just an unusual construction in an unexpected part of the world, it is an incredible architectural achievement that has been recognized internationally as a masterpiece of design. The Heydar Aliyev Center won the Design of the Year award in 2014, turning the building into one of Baku’s most photographed landmarks

Created by world-famous architect Zaha Hadid and completed in 2012, this structure, located on the Heydar Aliyev Boulevard on the way from the international airport to the historic city, is as modern and eye-catching as can be. From a distance, the unique structure’s walls appear like the undulating folds of soft fabric. The fluid shapes, glimmering glass walls, and bright white tiles stand out against a backdrop of stately Soviet-era housing blocks. The complex was built on an ample plaza featuring gardens and fountains.

Named after Azerbaijan’s former Soviet-era leader and president (1969-2013), the Heydar Aliyev Center is home to a museum, exhibition halls, offices, a cafetaria, conferences halls, meeting rooms, and a media center. 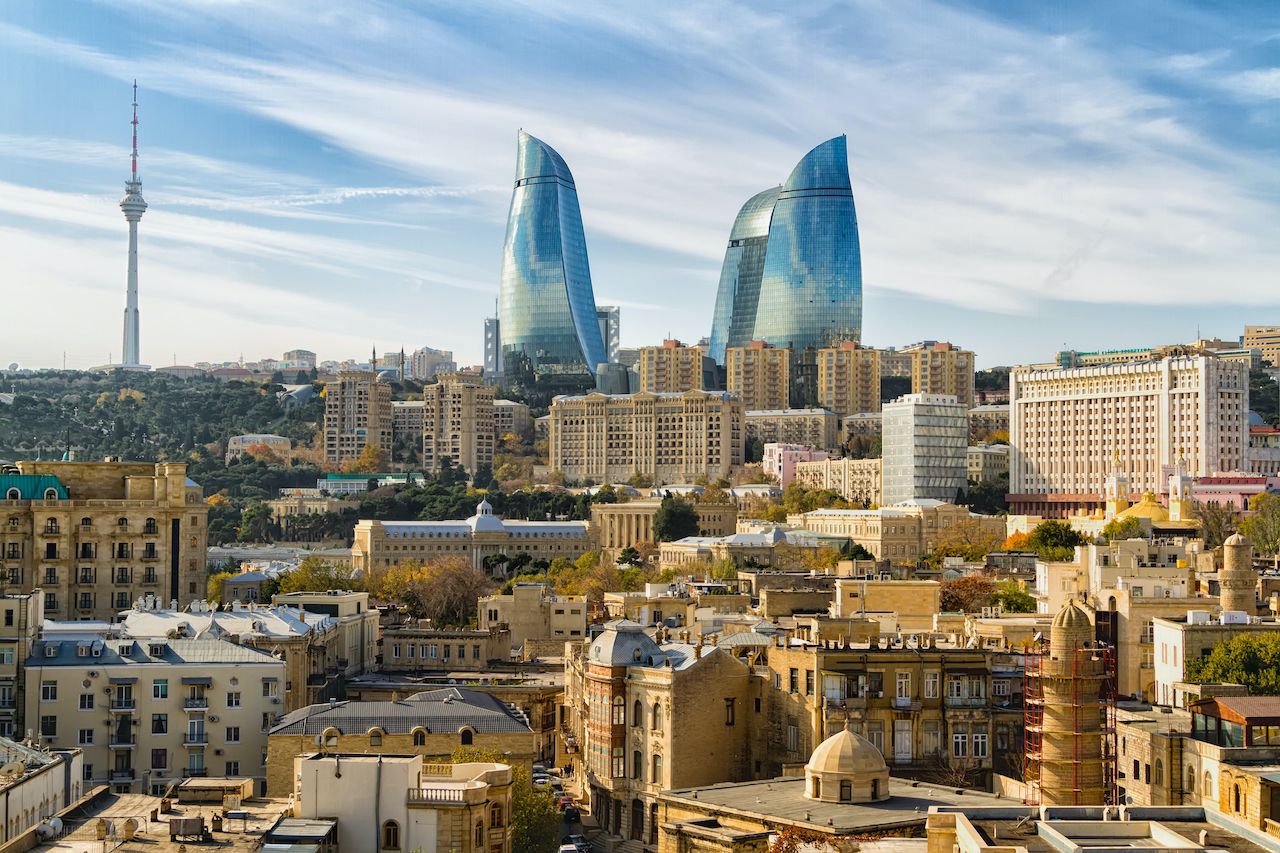 Positioned on a hill overlooking the Caspian Sea, Baku’s Flame Towers can be seen from pretty much anywhere in the city. Ranging between 36 and 39 stories high, the trio of iconic glass high rises was built to honor Azerbaijan’s ancient devotion to fire. Zoroastrianism, one of the oldest monotheistic religions in the world also known as “the cult of the fire,” was practiced in Azerbaijan before the advent of Islam, and many remnants of this ancient tradition — such as the Ateshgah Fire Temple or the Yanardag State Historical Cultural and Natural Reserve — can still be visited in the surroundings of the capital.

Erected by architectural firm HOK in 2013, the three Flame Towers stand strong against the winds of the Caspian Sea. Each of the three buildings serves a different function: The tallest tower houses 130 luxury apartments while the other two contain the five-star Fairmont hotel and office space. 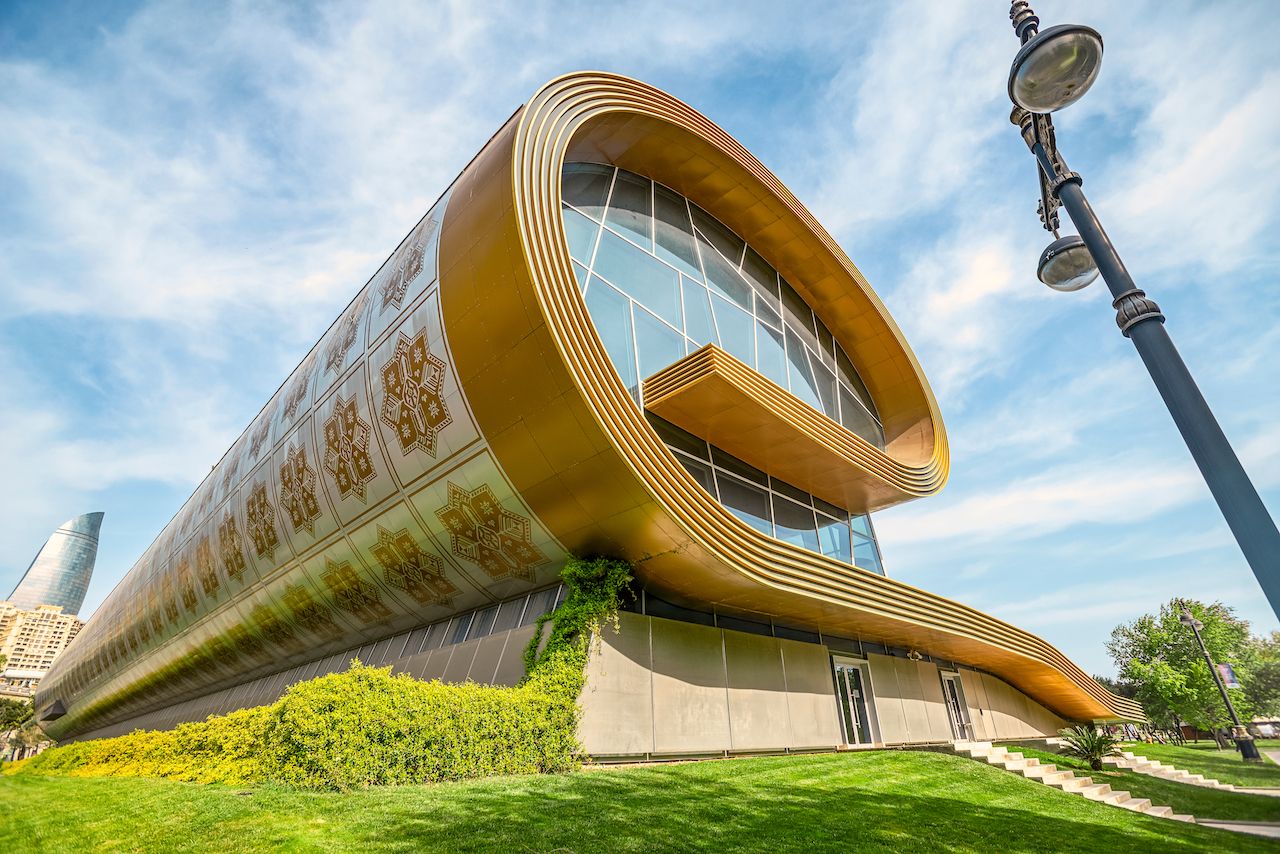 While contemporary architecture may at times seem too conceptual for the untrained eye, this structure moves away from abstraction by providing a design that explicitly addresses the meaning behind the building. You really can’t get it wrong — Azerbaijan National Carpet Museum is built like a giant rolled-up rug.

The traditional art of carpet weaving is a significant part of Azerbaijani culture, and the Azerbaijan National Carpet Museum honors this tradition by displaying thousands of unique and precious examples of the carpet-weaving art from all over the country, from flat-woven carpets to pile carpets. The museum also covers other forms of Azerbaijani applied arts, such as metalwork, ceramics, and jewelery.

Designed by Austrian architects Franz Janz and Walter Mari with the support of UNESCO and completed in 2014, the Azerbaijan National Carpet Museum works has become a research, training, cultural, and educational center, as well as a tourist attraction. 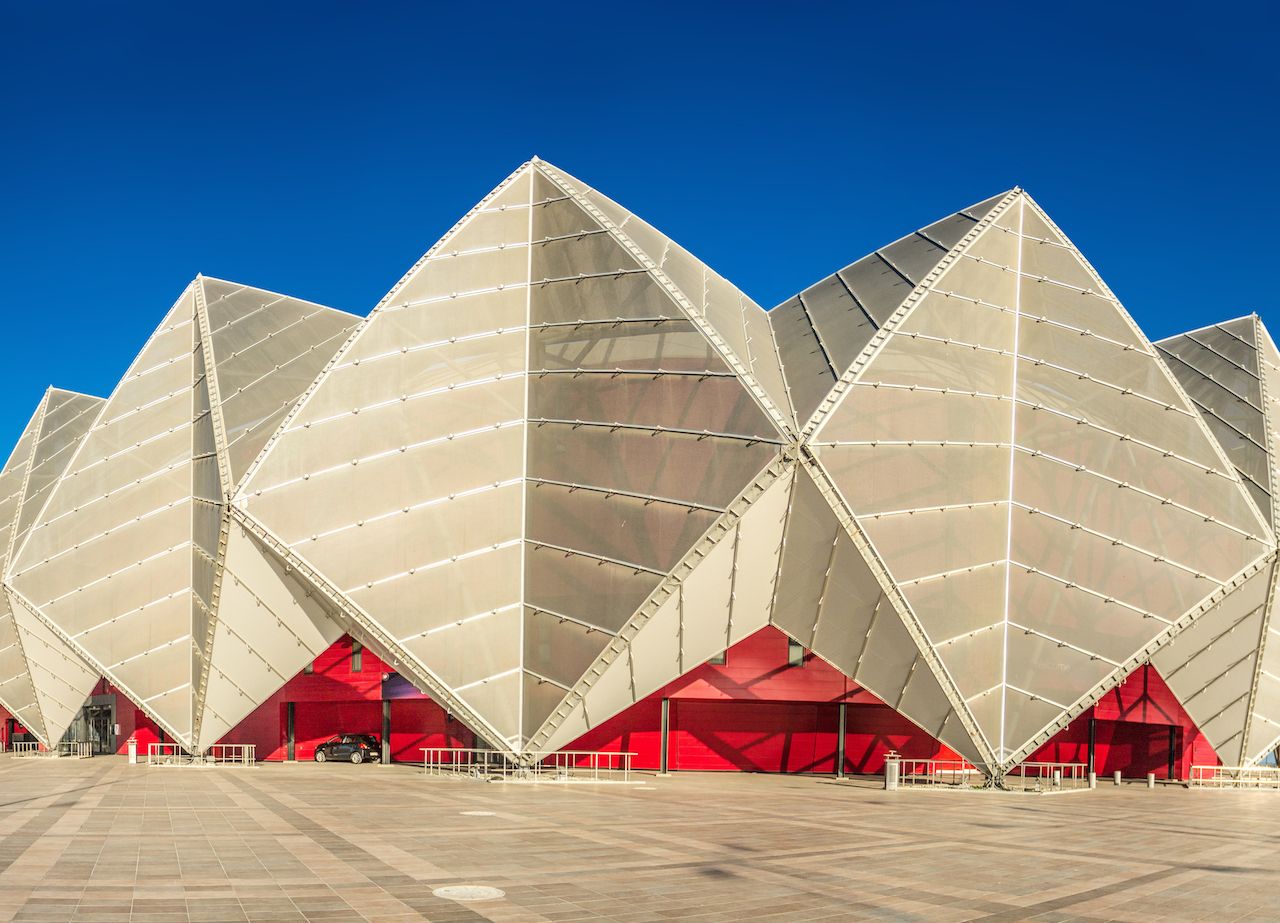 After Baku was nominated to host the Eurovision Song Contest in 2012, it became necessary to build a venue that could hold thousands of arriving spectators. The Crystal Hall, located on a peninsula outside of the city center, was designed by the German firm GMP and the Swiss company Nussli, and it was erected in a record time of only eight months (just a month before the singing contest). Able to hold up to 25,000 people, the Crystal Hall functions as both a sports and concert arena.

The Crystal Hall is like no other building out there. Circular in shape, its exterior is entirely faceted like a crystal, and each of the flat faces is covered in LED lights, creating a futuristic light spectacle at night. During the Eurovision contest, the lights were used to show the colors of the flag of each contestant. 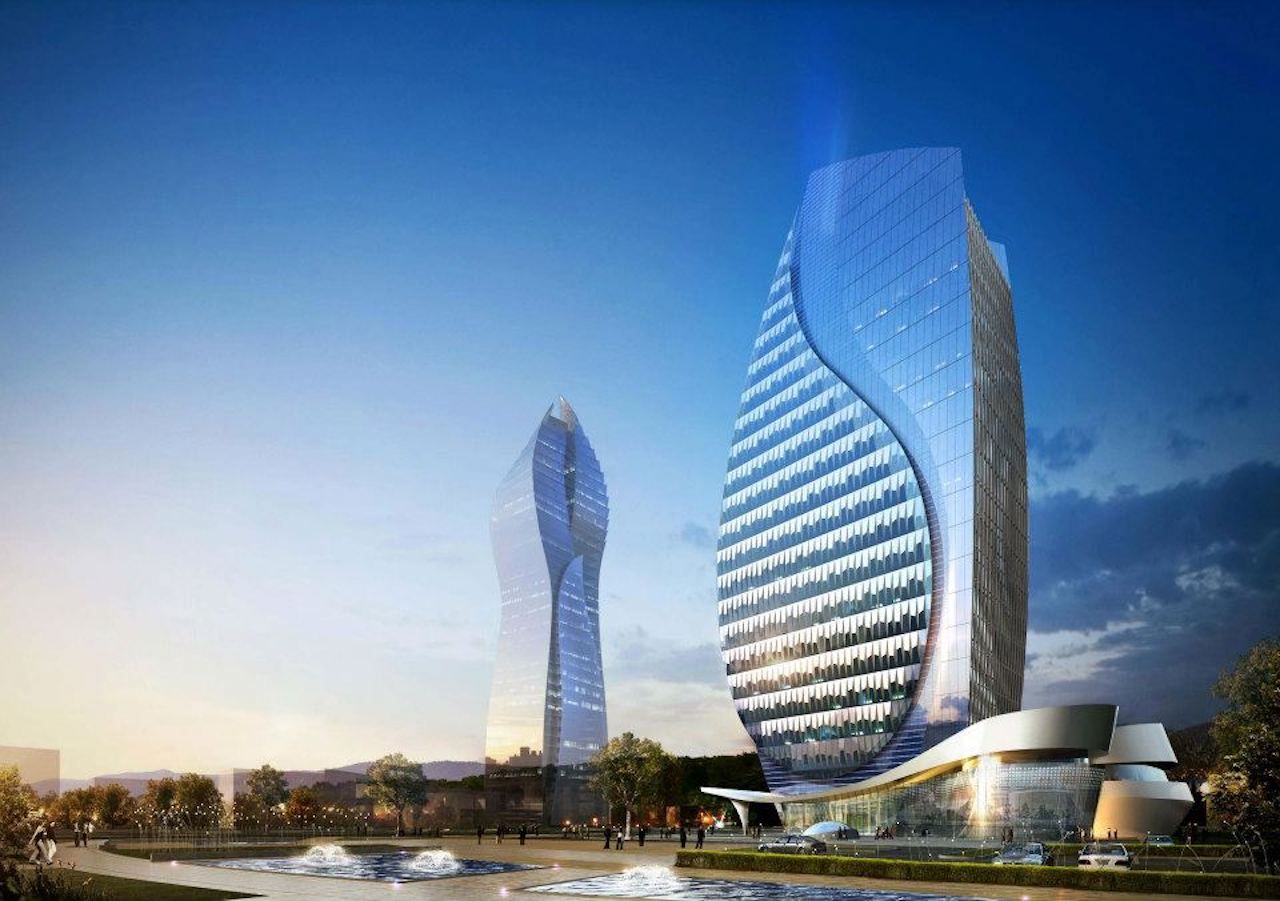 The $230 million headquarters of the State Oil Company of the Azerbaijan Republic was completed in 2016 after a six-year-long process of construction by Heerim Architects, a Korea-based company. The twisted, high-tech glass building housing the SOCAR offices has come to dominate Baku’s skyline with its 685 feet in height. It is the tallest skyscraper in the whole of the Caucasus and probably the clearest expression of the immense focus on the oil and gas industry in the region. 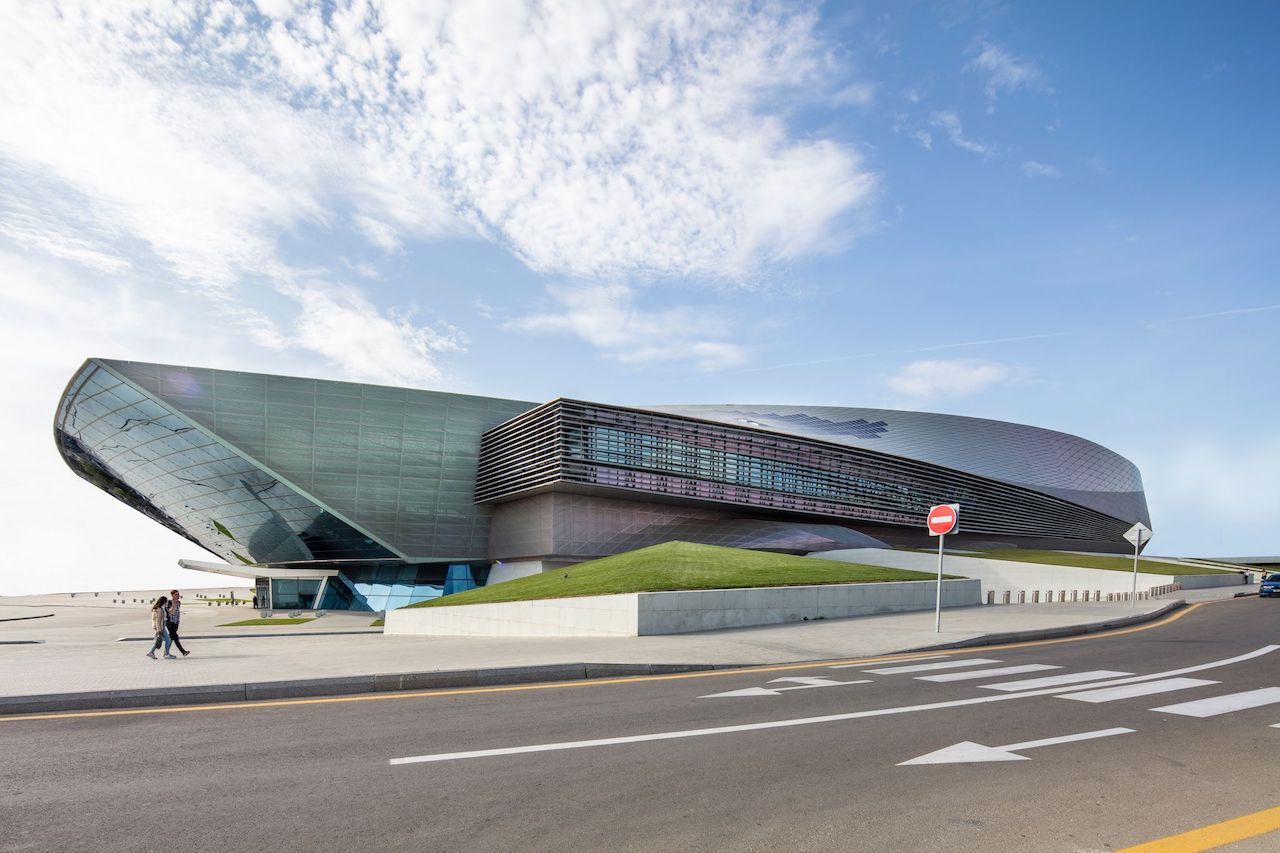 A lesser-known example of Baku’s hyper-modern architecture is the Conference Center built in 2015. Again, this is the largest structure of this kind in the Caucasus, with 17 conference halls and a large auditorium capable of hosting 3,500 people. Located next door to the Heydar Aliyev Center, this futuristic and innovative complex contrasts the rounded forms of its neighbor with sharp angles and metallic colors. Designed by Austrian architecture firm Coop Himmelblau, the Baku Conference Center was created with more than just aesthetics in mind; it was built with building-integrated solar power and other low-energy consumption technology to reduce its environmental impact.

Beauty beyond the ultra-modern structures 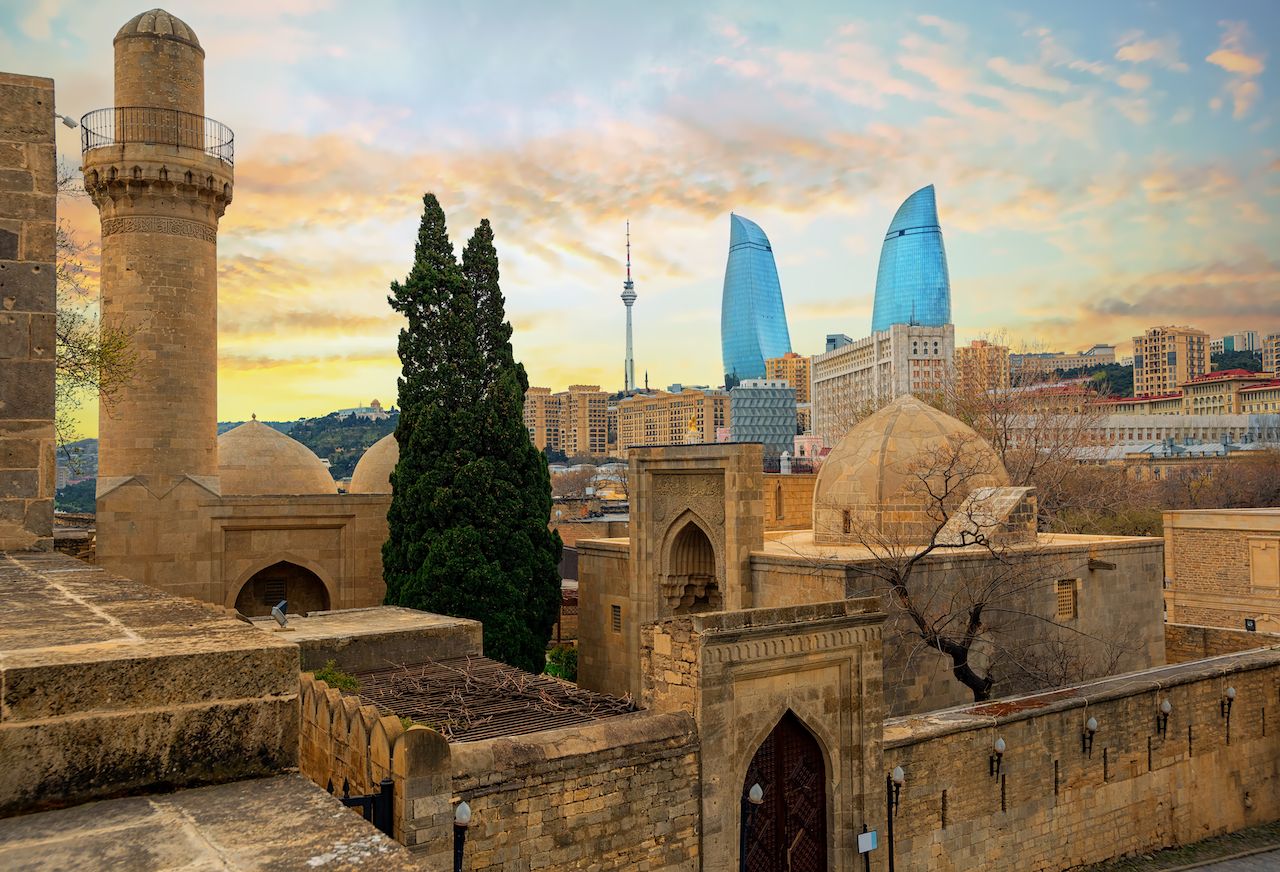 Among the glass towers and eccentric structures are dozens of historic buildings that are worth checking out if you want a well-rounded perspective of the capital. Inside the UNESCO-protected Old City is the Shirvanshahs’ Palace Ensemble, built between the 12th and 15th centuries to house nine buildings, including the Dervish’s Mausoleum and the Palace mosque. Minutes away is the 97-foot tall Maidan tower, peeking out above the city walls. The origins of this structure are still uncertain, but some evidence suggests that it may have been built between the sixth and seventh centuries and originally served as a Zoroastrian temple, turning into an observatory and defensive watch tower over the course of its history. 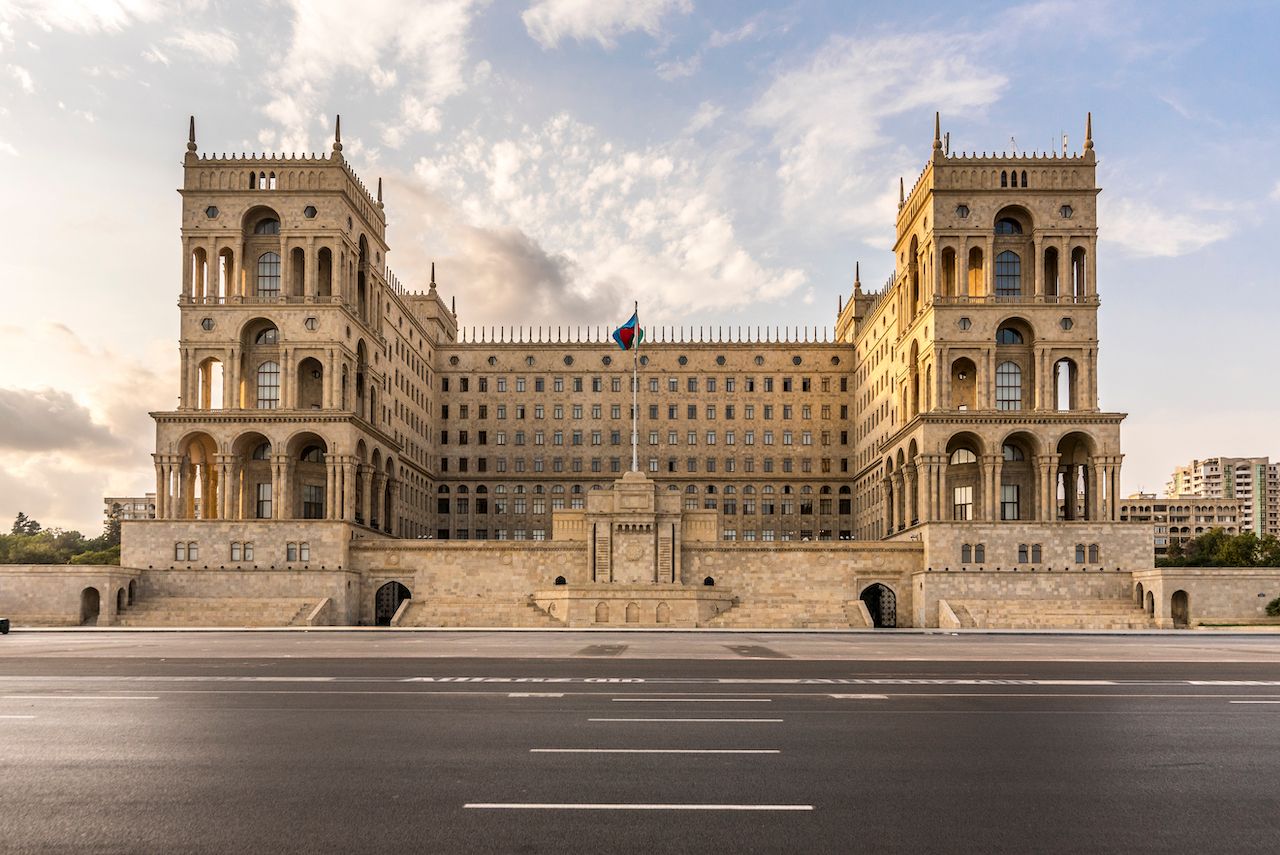 If imposing Soviet architecture is what you are looking for, head to the Government House (84 Uzeyir Hajibeyov) where the national flag has substituted a 36-foot-tall bronze statue of Lenin after independence. The 1972 Heydar Aliyev Palace, formerly known as Lenin Palace and not to be confused with Zaha Hadid’s recent Center, is a theater also worth checking out.