Everything about the Soviet Union was enormous: the land mass, the historical feats, the ambitions, and the mistakes. The USSR has fallen, but the obscure creativity that developed in Communist Europe (even beyond the USSR) at the time still stands in the shape of massive concrete buildings. Here are nine examples of big, stark, extravagant Soviet-era constructions that look like science-fiction creations. 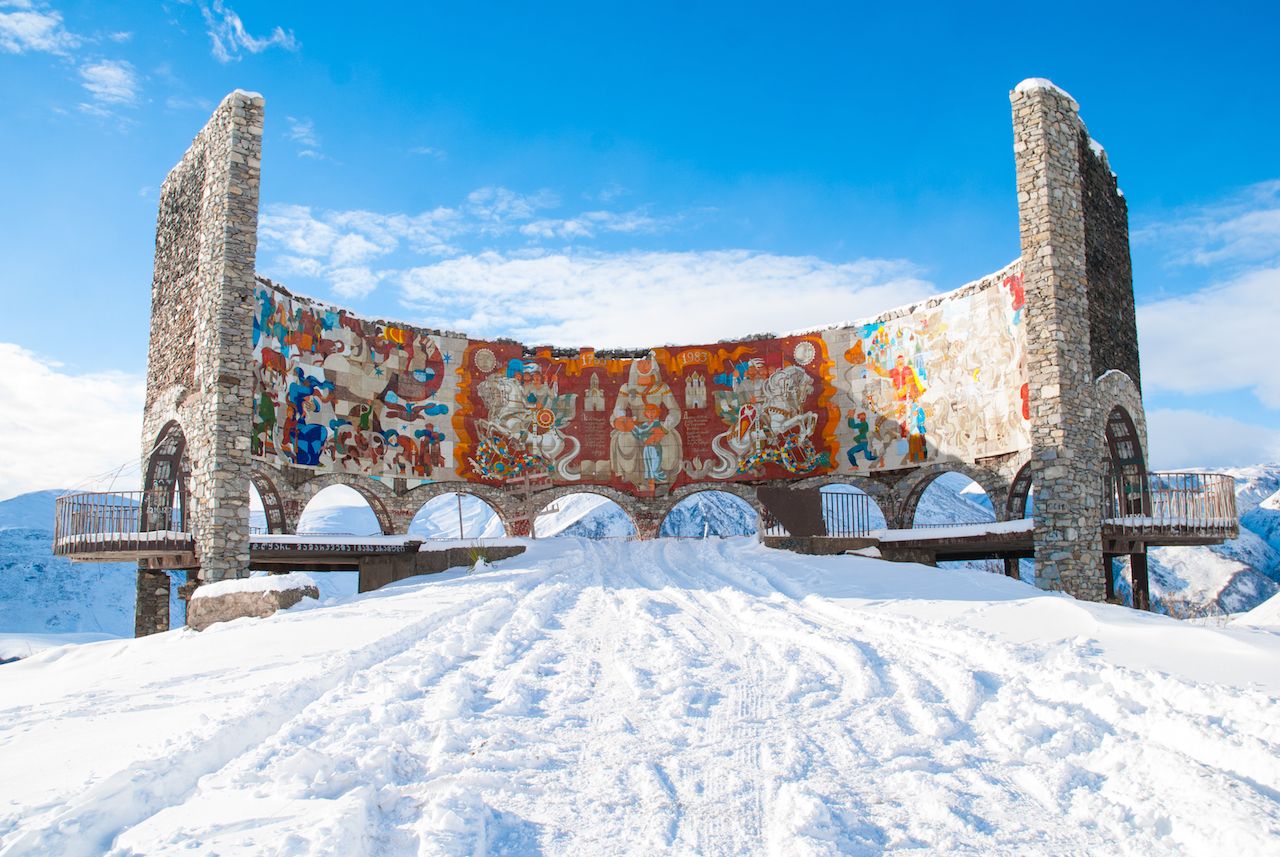 Created in 1983 to commemorate the 200th anniversary of the Treaty of Georgievsk, which established eastern Georgia as a protectorate of the Russian Empire, the Russia-Georgia Friendship Monument (also called the Peace Monument) is located smack dab on the only road from Russia to Tbilisi. The arch stands on a viewpoint overlooking the deep ravines and immense mountains of the Caucasus range. Inside the stone-clad semicircle designed by architect Giorgi Chakhava (also the creator of the iconic Soviet-era “Ministry of Roads” building in Tbilisi) is a huge, colorful Soviet-style mosaic depicting scenes of Georgian and Russian history. 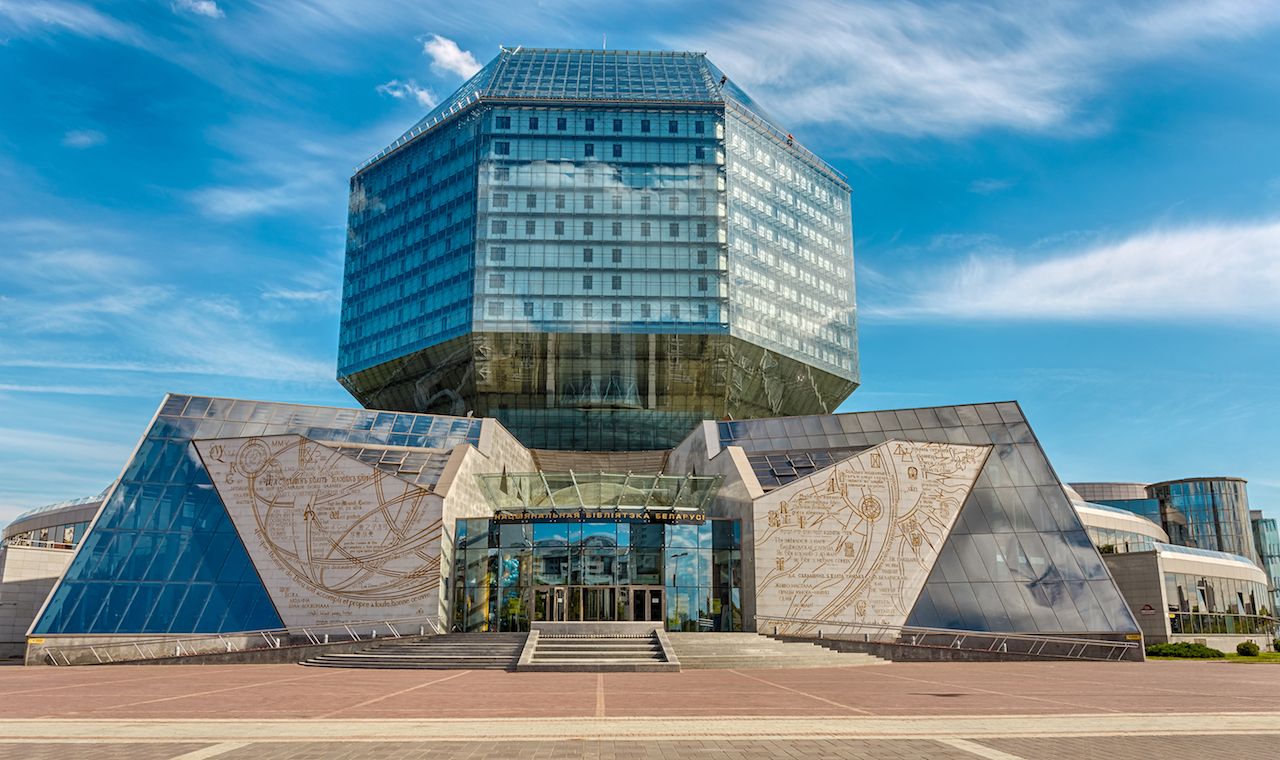 Soviet architects Viktor Kramarenko and Mikhail Vinogradov designed the daring new Minsk Library in 1989, but it took 13 years to actually build the giant polyhedron that towers over Belarus’ capital today. The unusual geometry of the building is meant to symbolize the vastness of the world and the supreme importance of knowledge for those who live in it. Its surface consists of 18 squares and eight triangles covered by heat-reflecting mirror glass, which colorfully light up at night.

3. The Memorial House of the Bulgarian Communist Party — Bulgaria 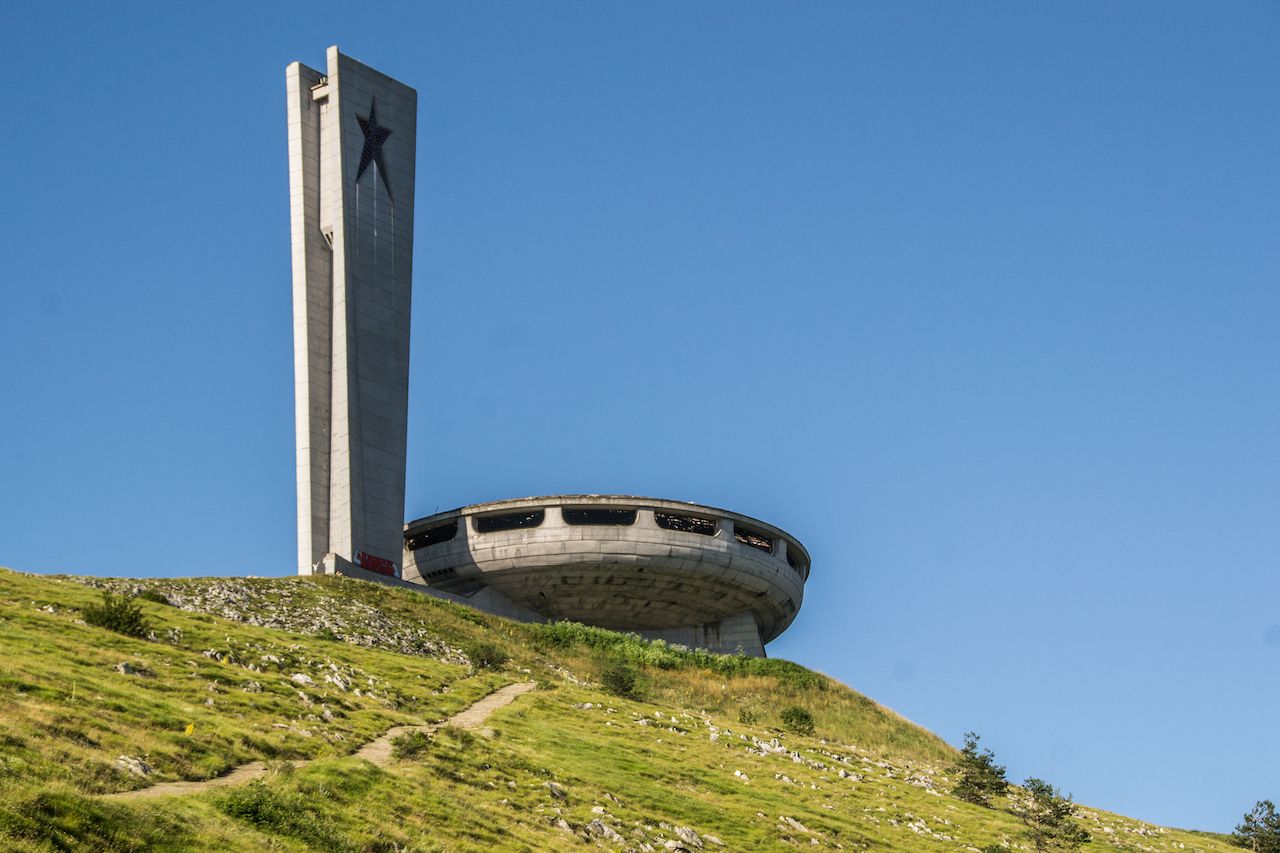 In the mountains of central Bulgaria, on Buzludzha Peak, stands an abandoned monument that was built in 1981 as a tribute to the Bulgarian Socialist Party. The Buzludzha Monument is a saucer-shaped building with a tower bearing a star. Inside of the saucer, three immense mosaic panels cover 510 square meters and depict an allegorical history of the Bulgarian Communist Party.

After the fall of the Soviet Union and regime change in Bulgaria, the memorial was abandoned and left vulnerable to looters and vandals. Nowadays it lies in ruins, but still people come from far and wide to visit this vestige of the USSR’s past. 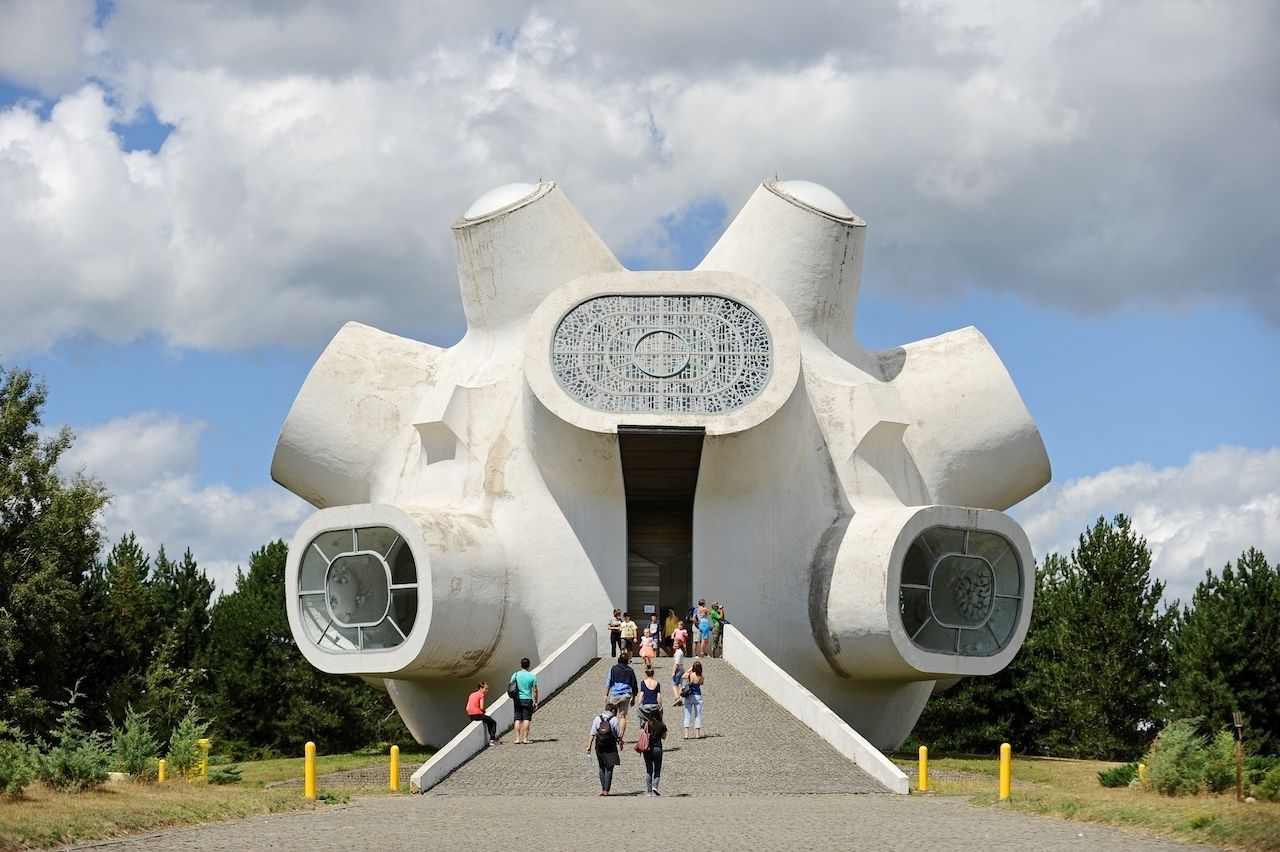 The Makedonium, also known as the Ilinden Memorial, is a complex of several sculptural and memorial elements dedicated to the fighters and revolutionaries of the Ilinden uprising of 1903, as well as the WWII soldiers who fought for the liberation of the country. The complex is located in Kruševo and was built in 1974. The most significant element is the dome, which looks like a naval mine. The white, 25-meter-tall concrete monument is round with multiple protruding windows, four of which are covered in beautiful stained-glass panels. If you make it to the Kruševo Makedonium, go inside the dome. It’s the most beautiful part of the whole complex. 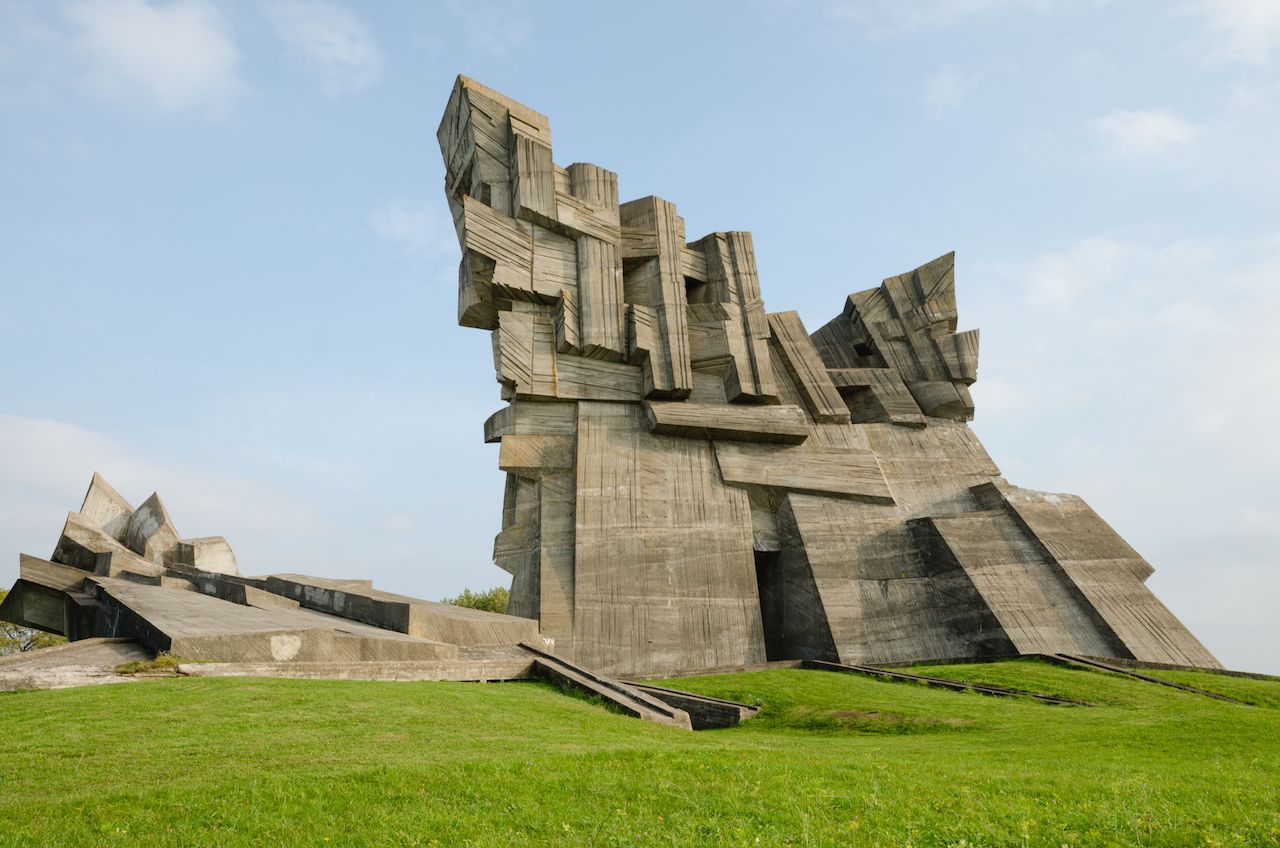 The Ninth Fort was the imprisonment and murder site of 50,000 people, most of which were Jews, during the German occupation of Lithuania between 1941 and 1944. After WWII ended in 1958, the fortress was transformed into a museum and memorial. In 1984, a 32-meter-tall sculpture created by A. Ambraziunas was erected in honor of the victims of fascism and symbolizes “pain, sorrow, tortures, and eternal remembrance.” 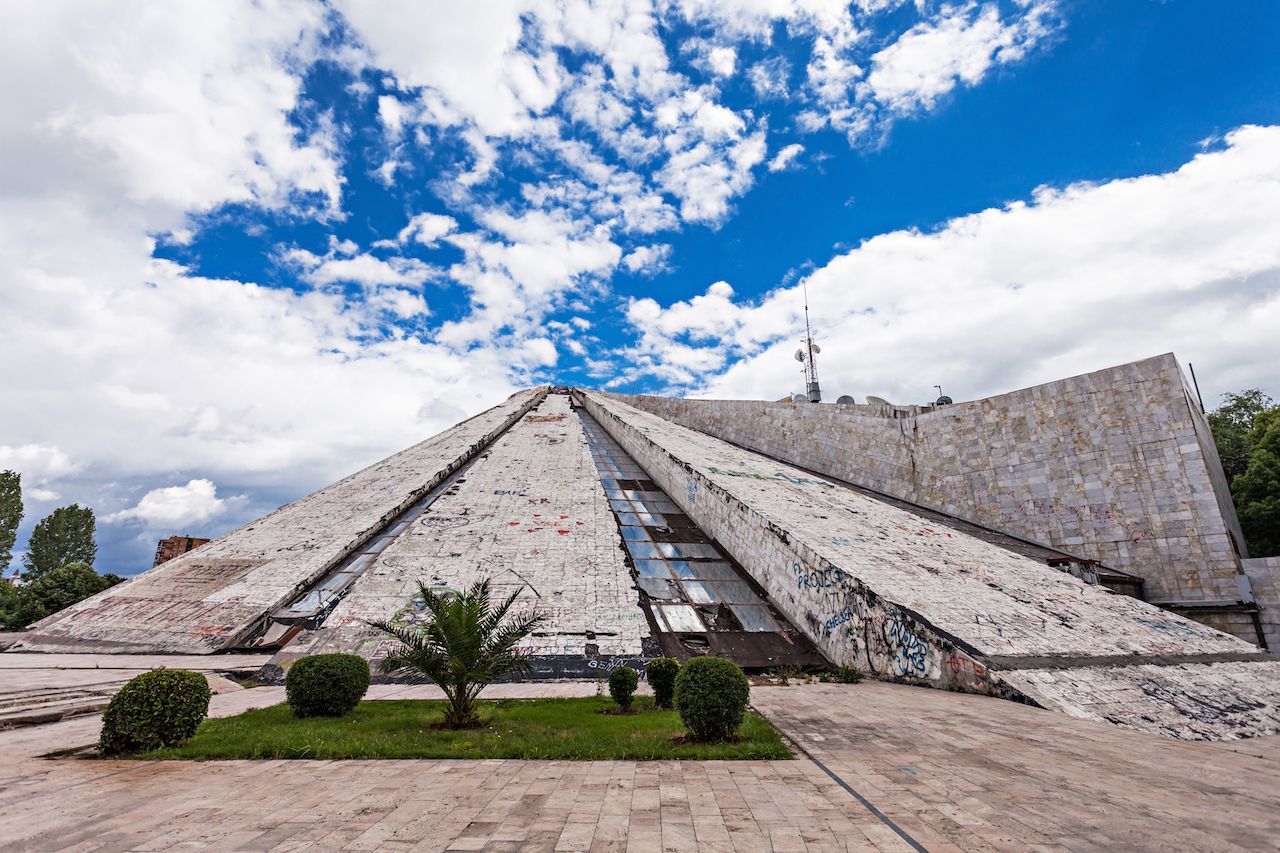 The Pyramid of Tirana, dedicated to former Albanian and Communist dictator Enver Hoxha, was built in 1988 by Hoxha’s daughter and son-in-law. In 1991, after the collapse of Communism, the structure was used as a conference and fair center before falling into disrepair. The site is currently neglected and covered in graffiti, but there are plans for a Dutch architecture firm to revitalize the abandoned Communist building and turn it into a technology and culture center. 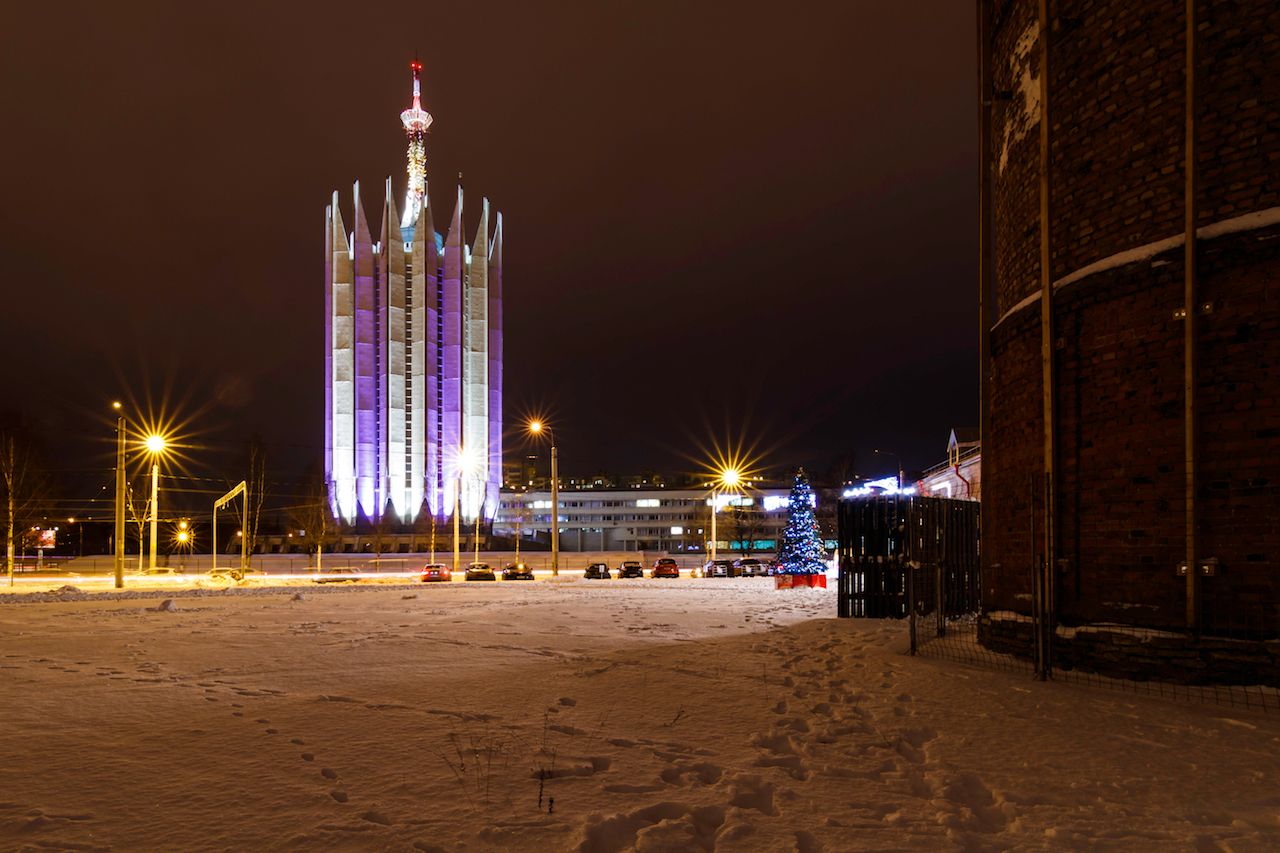 The futuristic design of the Institute of Robotics and Technical Cybernetics, one of the largest scientific centers in Russia, matches its purpose. The RTC participated in the development of Soyuz spaceships, the robotic probe Luna 16, and the robots used in the reconnaissance and liquidation of the radioactive contamination at the site of the Chernobyl disaster. The 77-meter tower has a sharp-angled facade and looks like a rocket about to take off, but locals have nicknamed it the “White Tulip.” 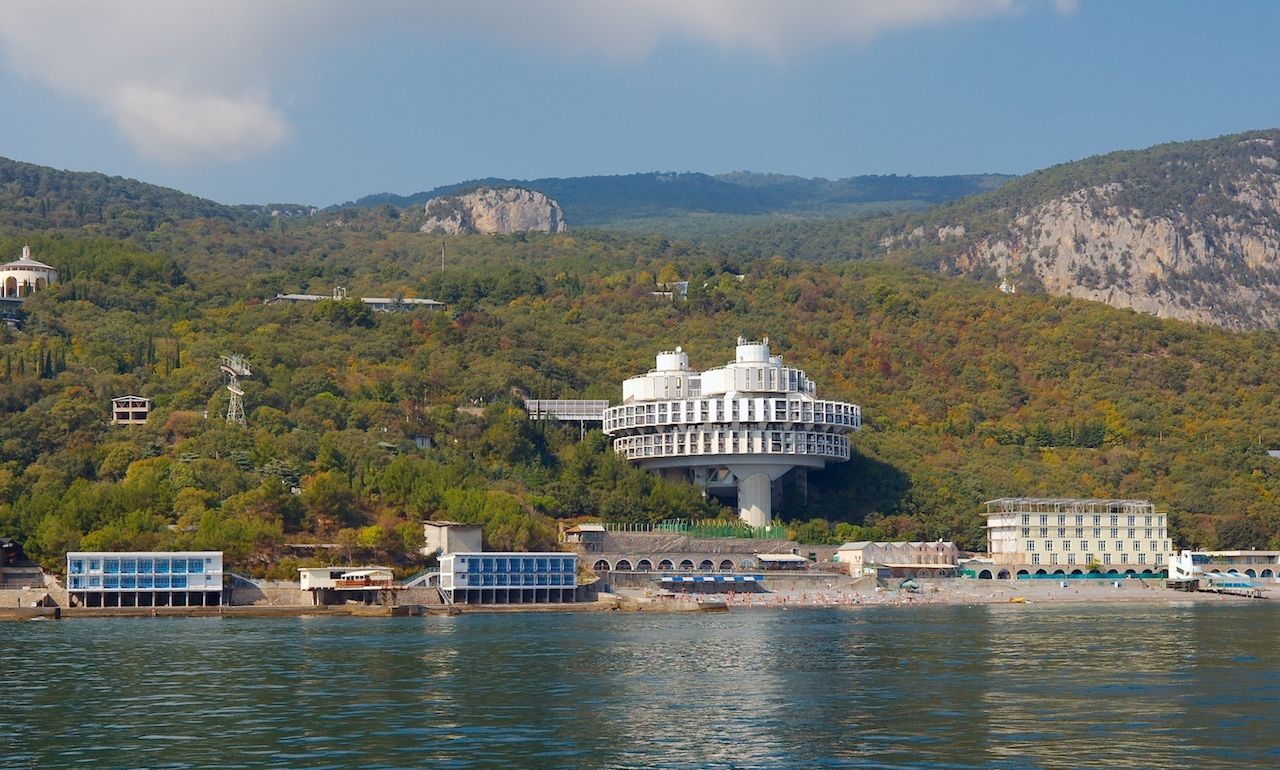 The Druzhba Sanatorium stands on a hill above the shore of the Black Sea in Crimea. This icon of Soviet-era architecture was designed by architect Igor Vasilevsky and built in 1986. According to the Los Angeles Times, the strange-looking building was mistaken for a launch pad by the Pentagon. The circular building with a saw-tooth facade is “lifted off the ground” by three pillars, allowing nature to grow below and around it. The design also provides each room with sunlight and views of the sea. According to The New York Times, “To enter, visitors cross a bridge encased in a glass tube and then descend into the complex, which is supported on massive legs housing the elevators and stairs.” If you’d like to check out this unusual building, you can book a room in it here; the inside design and views are allegedly just as cool as the outside. 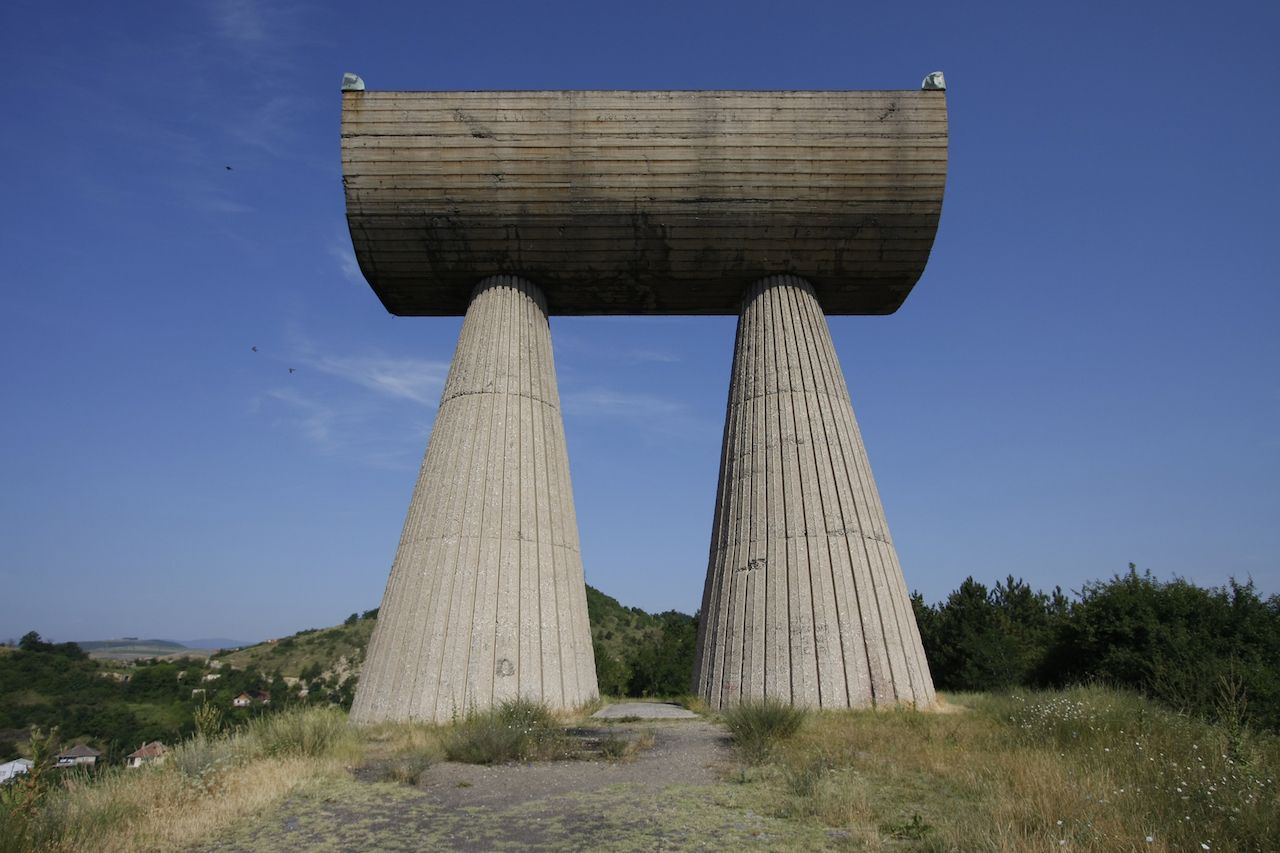 In the city of Mitrovica, on Miner’s Hill, stands a huge concrete statue of a mining cart in tribute to the Miners Troop, a group of Serbians and Albanians who united to resist Nazi occupation during WWII. The monument was meant to symbolize the friendship between the Serbian and Albanian people and is still considered to be the most significant monument in the city.

Yugoslavian monuments such as the Kruševo Makedonium and Miners Monument are often referred to as spomeniks, or “memorial structures built from the 1950s-1990s during Tito’s Socialist Federal Republic of Yugoslavia, whose primary intent was to honor its people’s resistance struggle during the National Liberation War (1941-1945),” according to the Spomenik Database.