Thankfully, the rest of the world has caught on to the cheesy wonder that is Detroit-style pizza, but when I was growing up in Michigan, that was the only kind of pizza I knew. I didn’t realize how special the crispy crusts were, with cheese caramelized right out to the edges. And as far as the shape went, which most people tend to fixate on, I grew up assuming square was the classic pizza shape. I caught on to the triangle style the rest of the country knows and loves after a while, but it was too late at that point. New York thin crust, Chicago deep dish, and, yes, even those wood-fired, hand-made pizzas in Rome were forever ruined for me. Sorry, but Detroit’s pizza stole my heart first.

The best place to grab a Detroit-style pizza 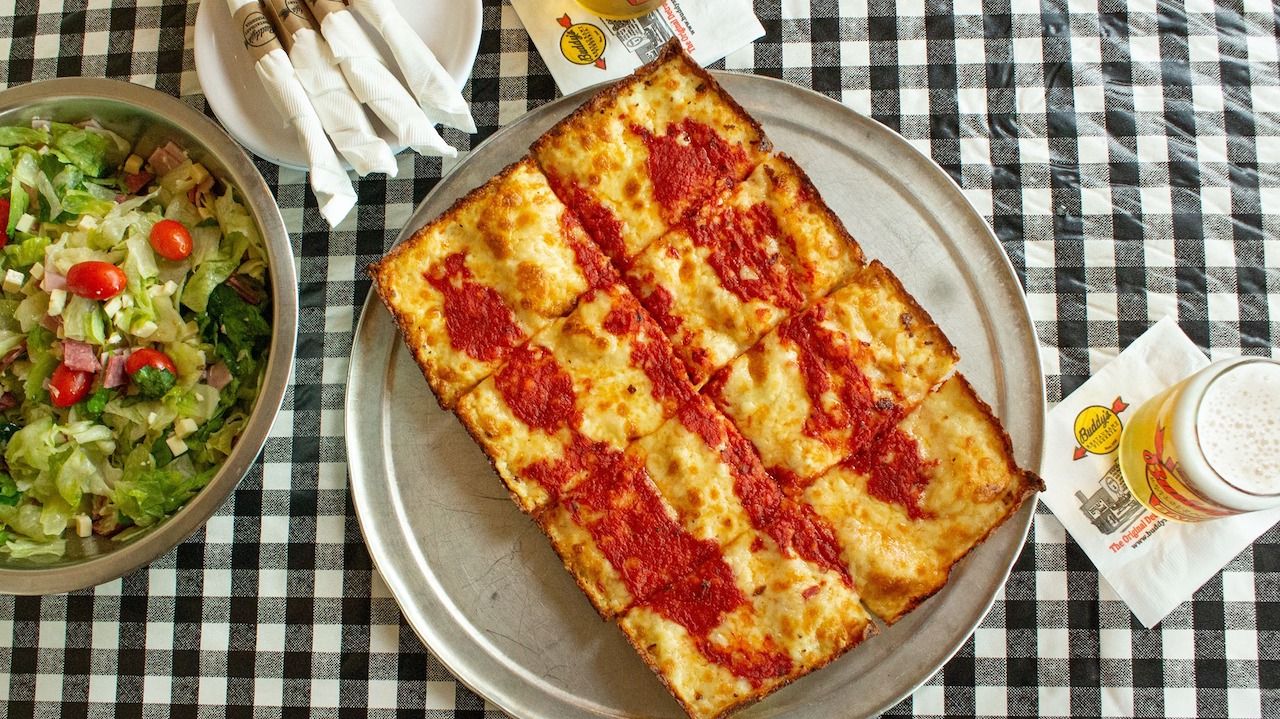 Here in Michigan, we tend to have strong opinions, but one thing we can agree on is that Buddy’s Pizza is the place to go for the best Detroit pizza. Detroit-style pizza was invented at Buddy’s, all the way back in 1946.

“The original recipe was a family secret of a cook at our Six Mile and Conant location,” Katy Dean, Buddy’s Vice President of Marketing, tells me. “The recipe was passed down to her by her Sicilian immigrant parents, and then carefully crafted and adjusted.”

While Detroit-style pizza was originally based on a Sicilian recipe, it has its own flavor profile and characteristics that make it totally distinctive from the original Italian iteration — and from every other style of pizza in America. 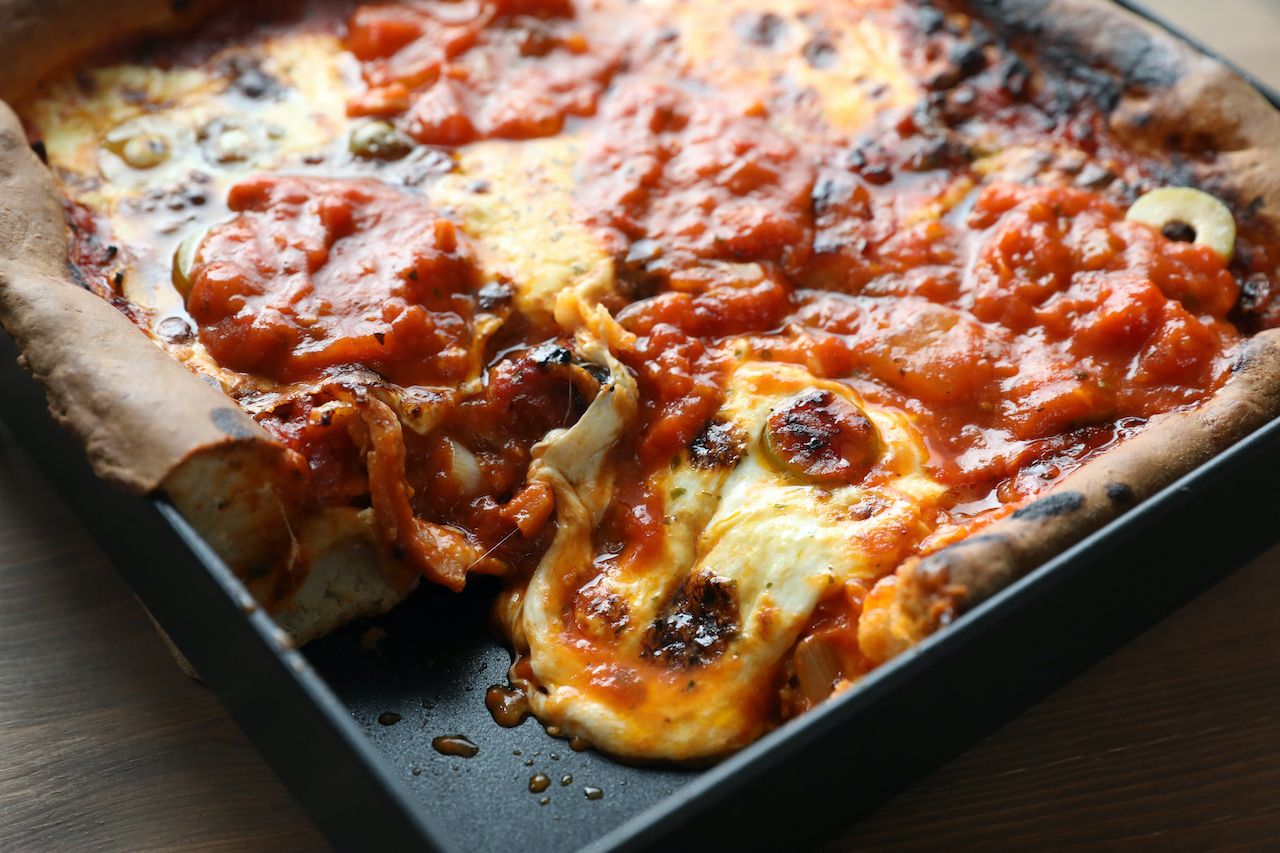 Many roundups of the world’s best pizzas – which have recently started to feature Detroit’s well-deserving masterpiece – define Detroit style by its signature square shape. This is where they go wrong. The secret to Detroit pizza isn’t its shape but what gives it that shape: the pizza pan.

Back in 1946, when Gus and Connie Piccinato were busy making the first pizza that would come to be known as quintessential Detroit style, they had a conundrum. They didn’t have any pizza pans. They were, however, able to borrow some blue steel pans from a local automotive plant. These pans “originally functioned as car parts pans — it doesn’t get any more Detroit than that,” Dean tells me.

Detroit, or Motor City, has long been the heart of the automotive industry, and it makes sense that the same heart, soul, and steel that go into our cars go into our pizza as well. According to Dean, Buddy’s still uses a version of the blue steel pans to create its iconic pizzas.

“The way these pans are seasoned over time adds to the unique flavor of the dough,” she says.

There’s another characteristic that defines Detroit pizza, besides the years of steel pan seasoning. In real Detroit pizzas, the toppings are layered backward. This means the pepperoni is laid down directly on the dough, so the twice-proofed dough soaks up the meaty, spicy flavors. The cheese (preferably Wisconsin brick) is next, spread all the way to the edges of the pan where it caramelizes to create the signature, crispy, cheesy crust. This also seals the pepperoni down into the dough, for enhanced flavor. Finally, two stripes of tomato sauce are ladled on top of the cheese.

“The sequence of the toppings impacts the flavor of the pizza significantly,” Dean says. “The consistency and taste created by this sequence is what makes Detroit-style pizza so special.”
I have to agree. In my opinion, Buddy’s does it best, but if you’re attempting to make Detroit pizza at home, this inverse layering is a step you can’t miss — without it, it doesn’t count as Detroit style.

For the love of Detroit pizza 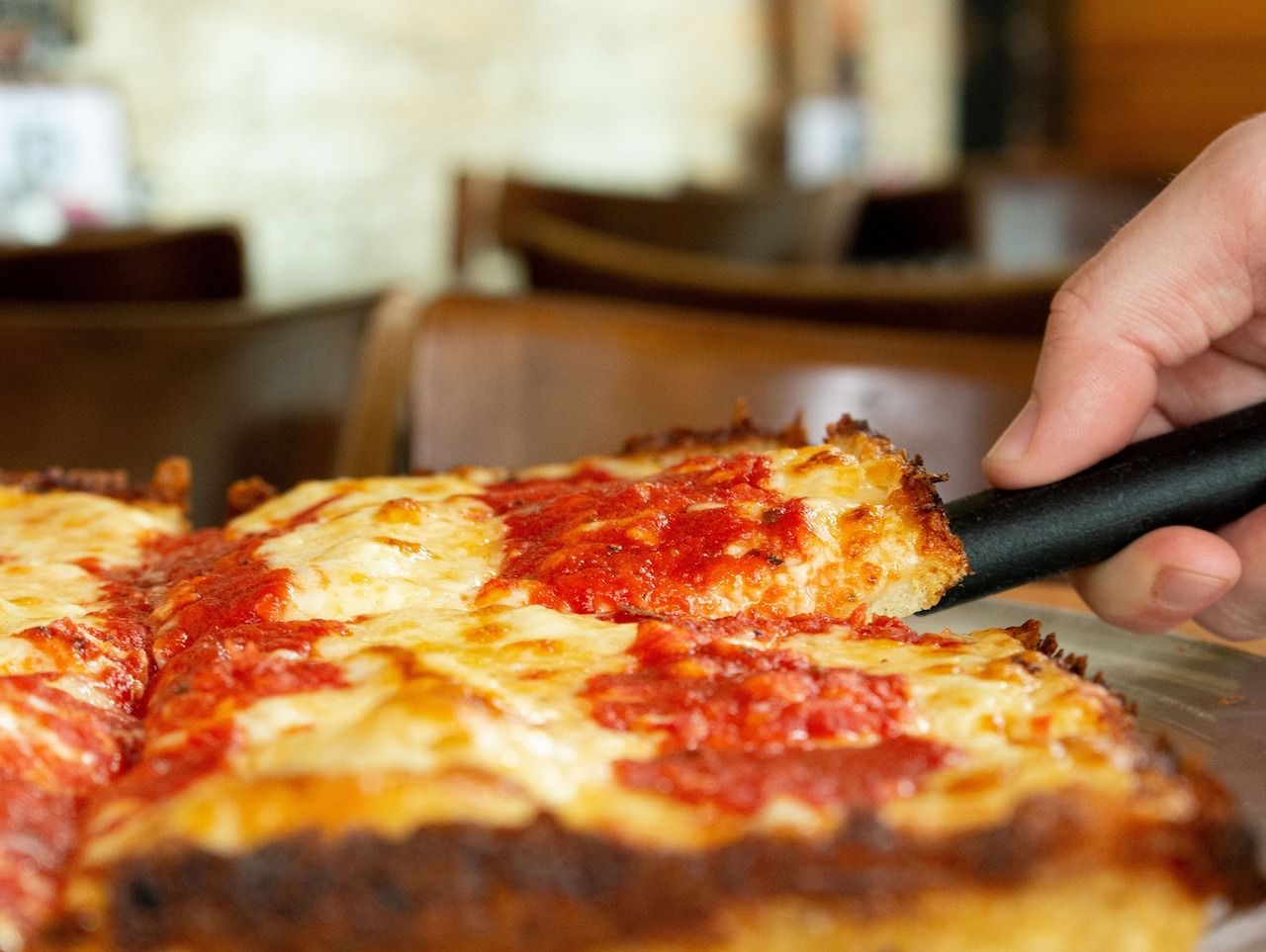 As Detroit pizza’s reputation has grown over the years, so has the business that started it all. Buddy’s has grown to the point that there are now 16 locations across lower Michigan. You can find the same quality at any of the Buddy’s locations, but my personal favorite, after the original Conant street location in Detroit, is the one in the town of Novi. It’s my tradition to stop here on my way home from Detroit airport — I order a massive antipasto salad and a classic pepperoni pizza, and it feels exactly like what it is: coming home.

Of course, I won’t be making runs to or from the airport any time soon. And while I’m staying at home in Michigan, I’ll be sure to continue enjoying this pizza I love so well. Dean describes Detroit pizza as a “unifier.” I’ve lingered over the cheesy goodness of Detroit pizza for years, and I have to agree. For those further afield, you can still try to make your own Detroit-style pizza. Just remember to layer your toppings backward, and use the oldest steel pizza pan you can find.

Food + Drink7 Pizza Styles You Need To Try To Understand True Italian Pizza
Tagged
Food + Drink
What did you think of this story?
Meh
Good
Awesome