Pizza is loved around the world. There are many American styles with fierce defenders, like New York style and New Haven’s apizza (no, that’s not a typo), which vary from the pies made at the cherished pizza shops of Paris, which are different from the pizza in Buenos Aires. But hands down, the most famous pizza in the world comes from Italy.

Pizza, along with an overwhelming number of pastas, is often the first food people think of when they imagine Italian cuisine. Yet there’s no one Italian pizza. Pizza is a regional food in Italy just like it is in the US, the styles of which range from thin-crust squares to what appears more like fluffy bread with some toppings.

These are the seven classic Italian pizza styles you need to know to fully understand all that pizza can be. 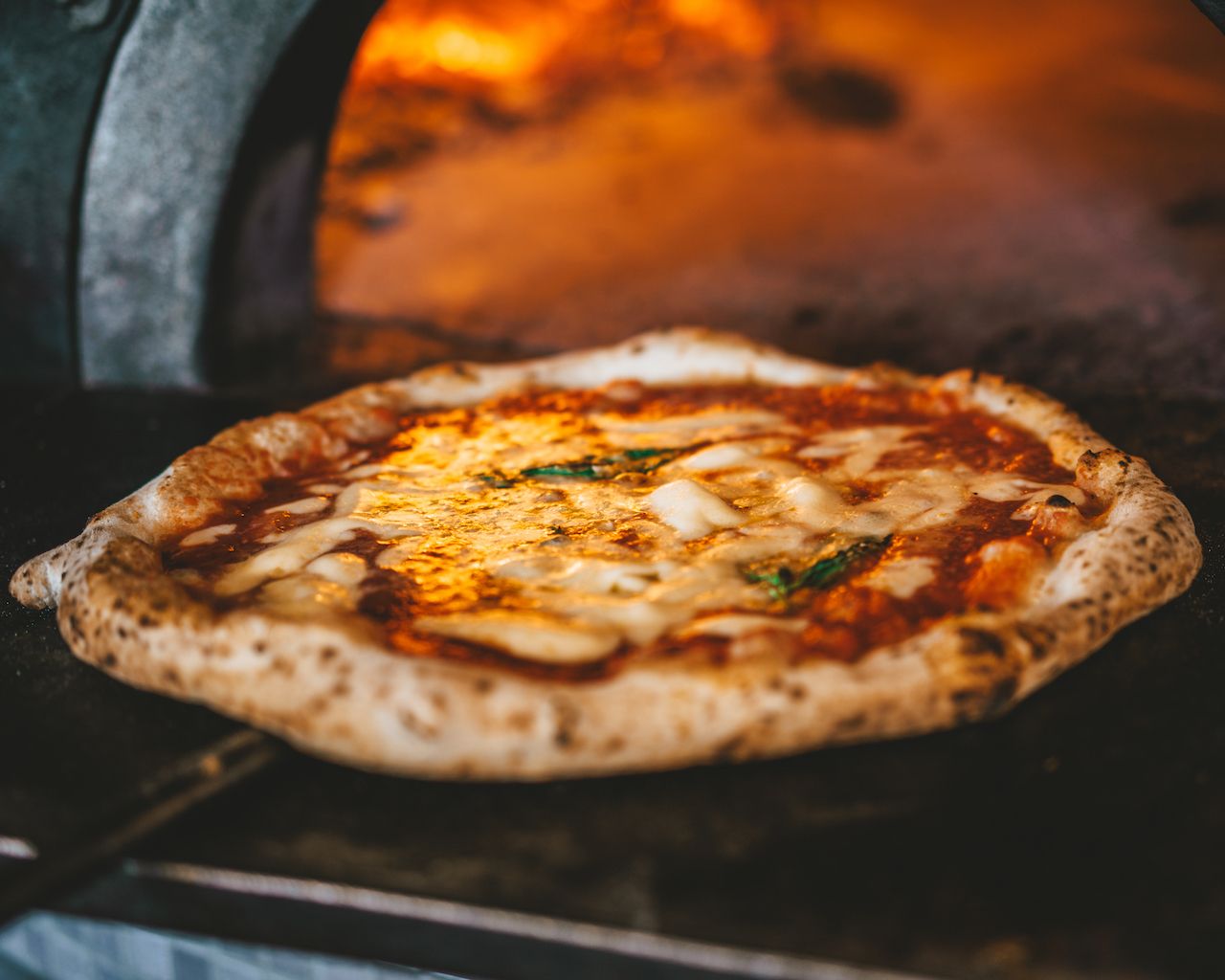 There’s a good chance that this is the pizza most people consider true Italian pizza. Napoletana pizza comes from Naples and has a strict set of production rules: Only wheat flour, yeast, salt, and water can be used for the dough, which is flattened to around three millimeters thick. It’s topped with a sauce of Roma or San Marzano tomatoes, and the cheese has to be actual buffalo milk mozzarella from Italy’s Campania and Lazio regions. The pie is quickly cooked in a hot wood-burning oven to create a fluffy crust that’s just as tasty as the thin, ingredient-laden middle.

This method of production is protected by UNESCO, as well as the Associazione Vera Pizza Napoletana, which works to “promote and protect, in Italy and worldwide, the ‘true Neapolitan pizza.’” You can find some true Neapolitan pizza in the US — just know it’s only legit if it’s certified. 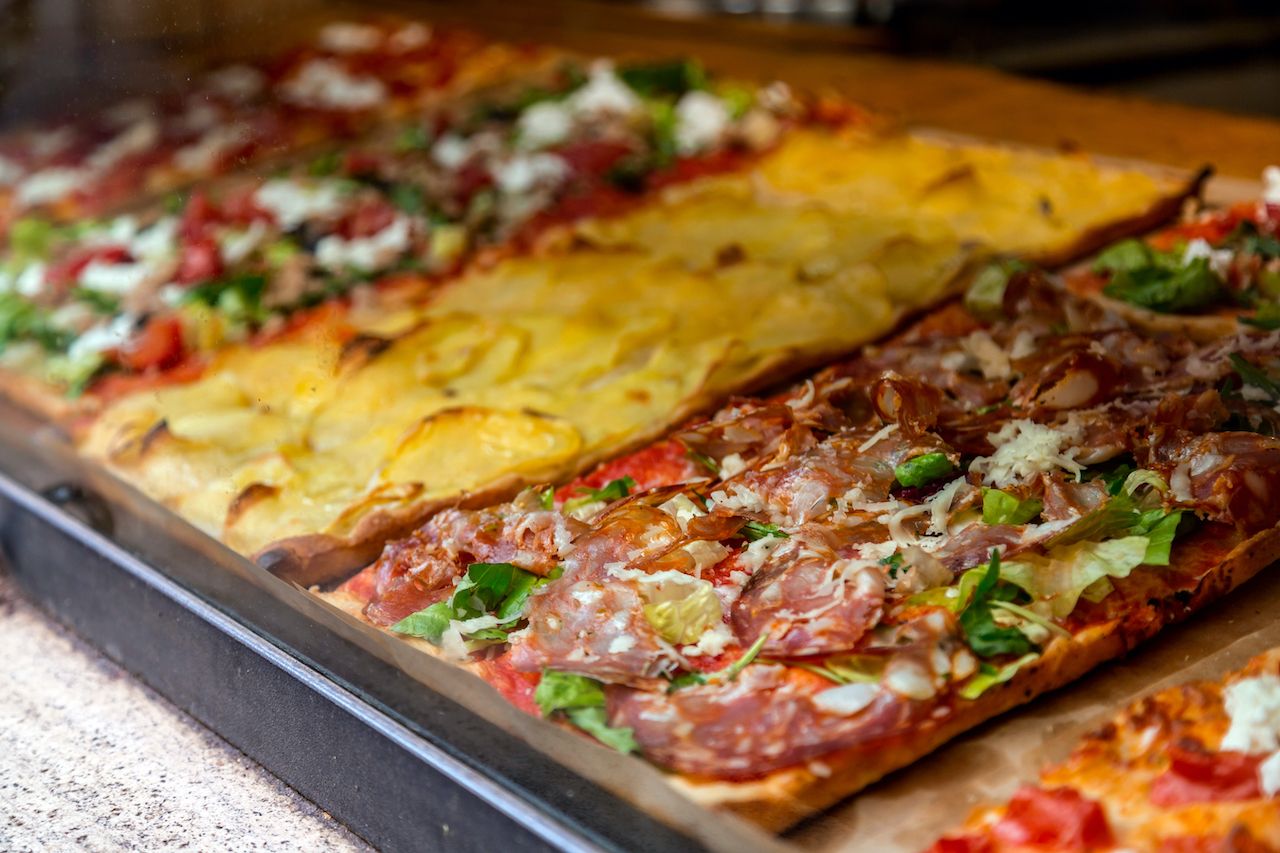 A classic style of pizza found in Rome, pizza al taglio means “by the cut. The name references the fact that the rectangular sheet pan pizza is sliced into squares and sold by the weight of the piece. Keep that in mind when ordering a square loaded with toppings, which range from classic rossa (tomato sauce) to potato and cheese to parmesan and fig. Pretty much anything you’re craving can top >al taglio.

These quick, on-the-go snacks are sometimes called by other straightforward names like pizza in teglia (“in the pan”) and pizza al trancio (“by the slice”). 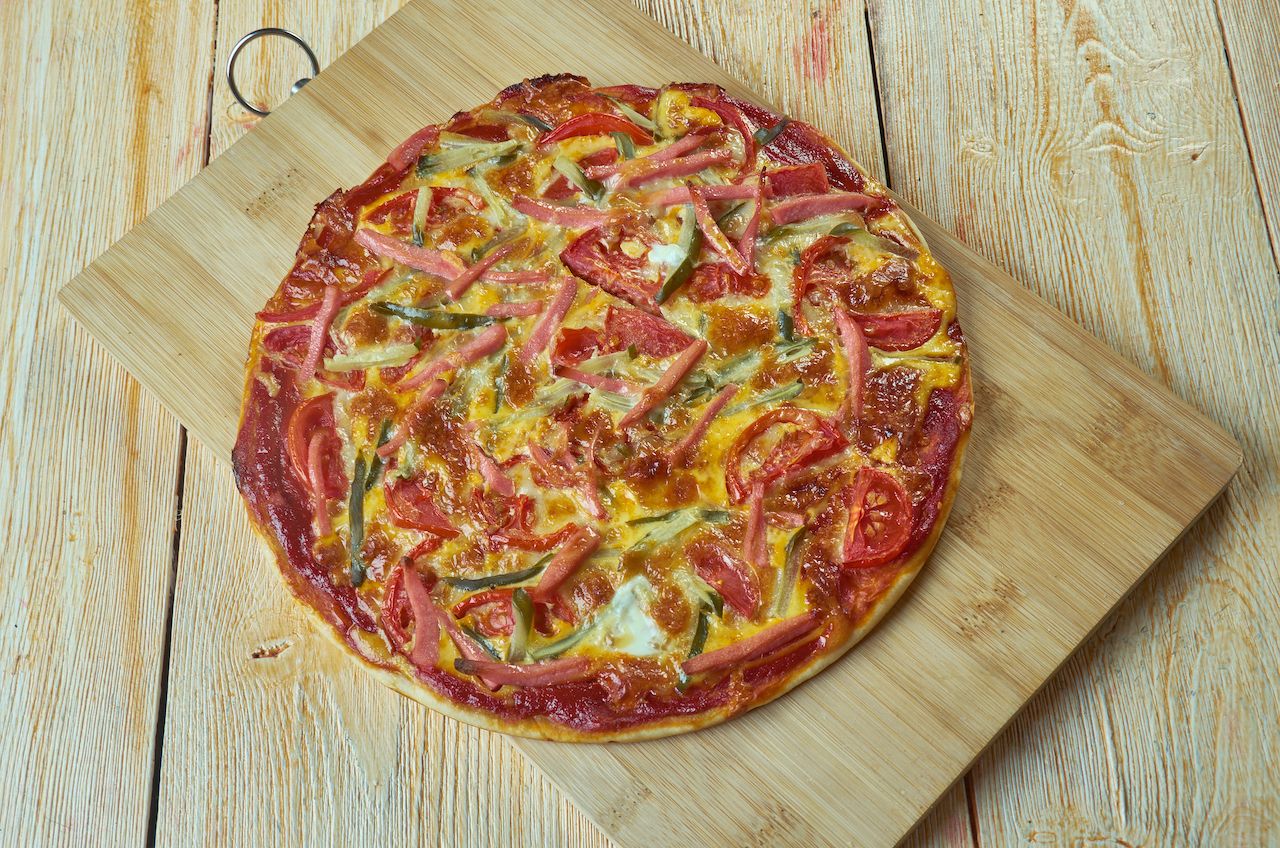 Another pizza style common in Rome, this round pizza has a crust that’s rolled as thin as the center of the pie. Pizza Romana is cooked in an electric oven, making the dough extremely crispy to the point of breaking, not bending, when you try to fold it. 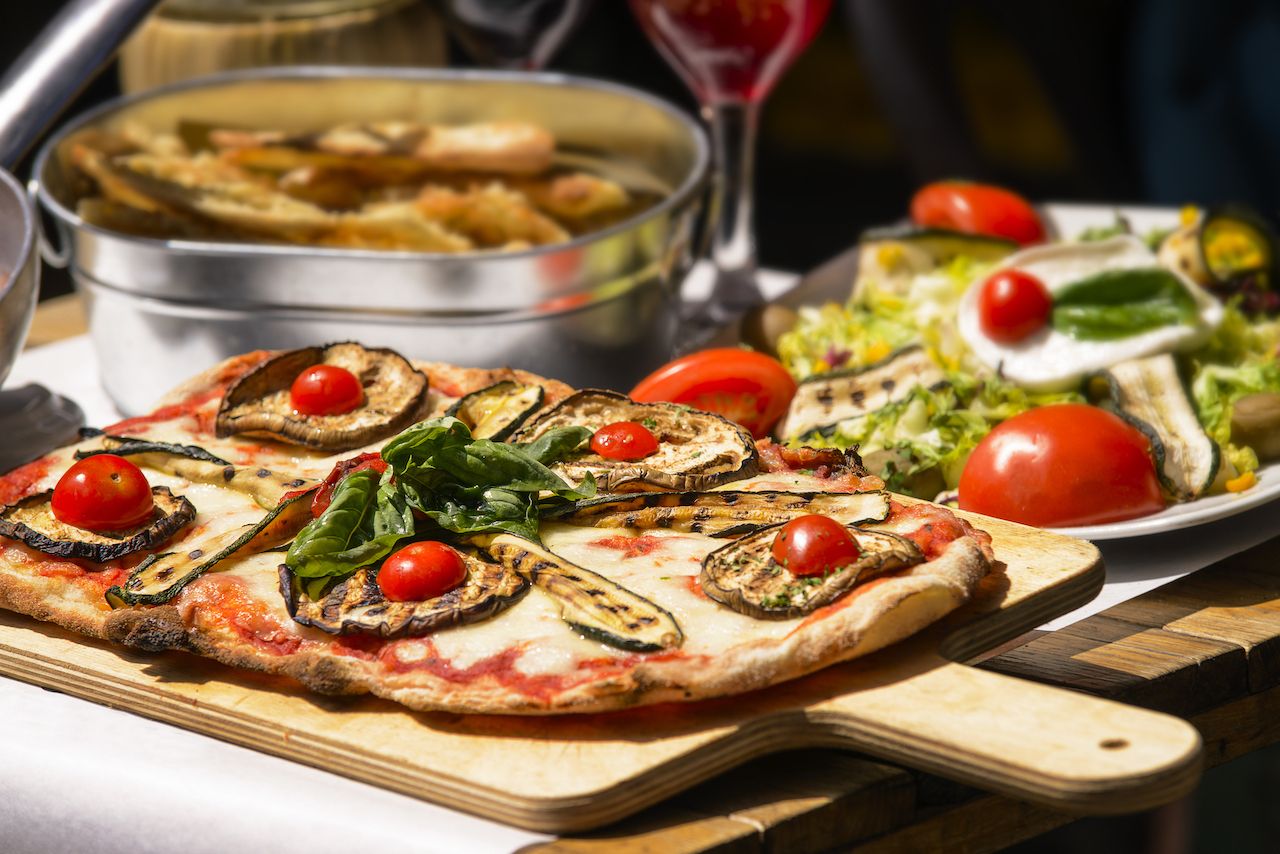 This pizza is named after the wooden paddle that’s used both for getting it out of the oven and for serving. Pizza alla pala is another style found around Rome. Like pizza Romana, it’s cooked in an electric oven and the crust and the middle are around the same size, but pizza alla pala has a hydrated dough that’s fluffy on the inside rather than rolled thin. 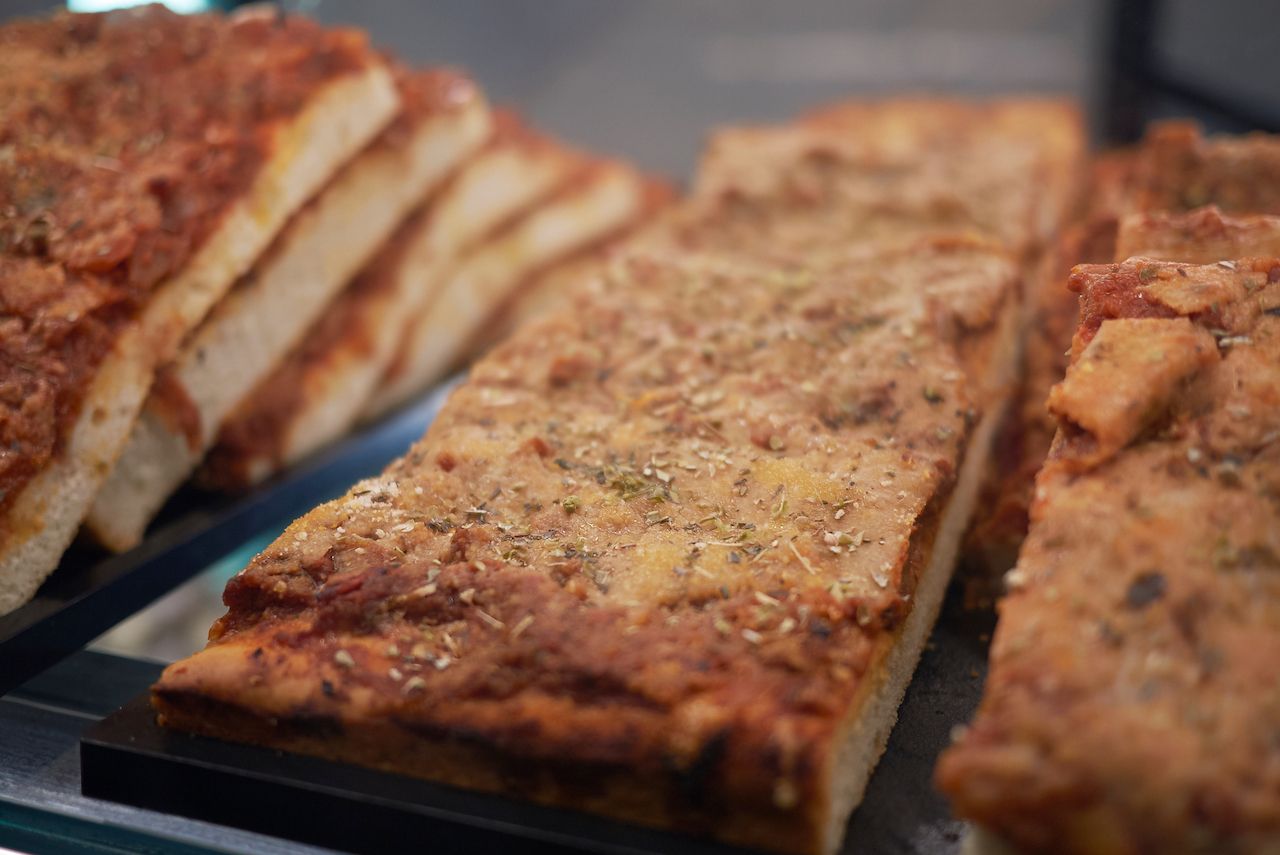 Sfincione is to pizza Napoletana what New York-style pizza is to Chicago’s deep dish. Pizza Siciliana comes from Sicily, as the name implies. It’s characterized by the bread, which is thick and fluffy like focaccia and comes in a round or rectangular shape depending on where it’s purchased. Toppings typically include goat and cow milk cheeses as opposed to Neapolitana’s buffalo mozzarella, as well as a tomato-based sauce and anchovies. 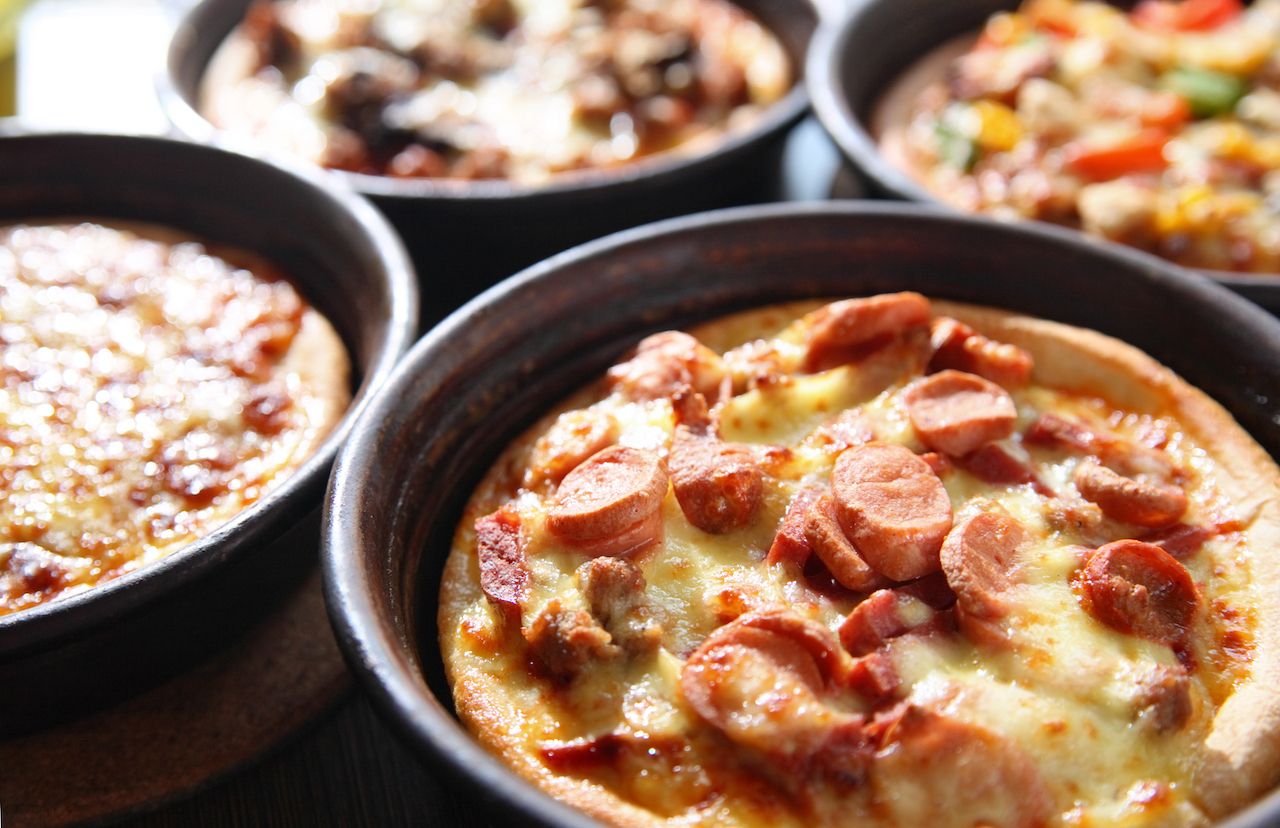 This pan pizza (padellino means pan) is baked and served in a small pan similar to deep dish pizza in the US. It’s most associated with Turin, though it can be found throughout Italy. The soft bread is topped with many of the same ingredients as the thinner styles, but pan pizza is thicker than the pizzas cooked on a flat surface in a wood-fired or electric oven. 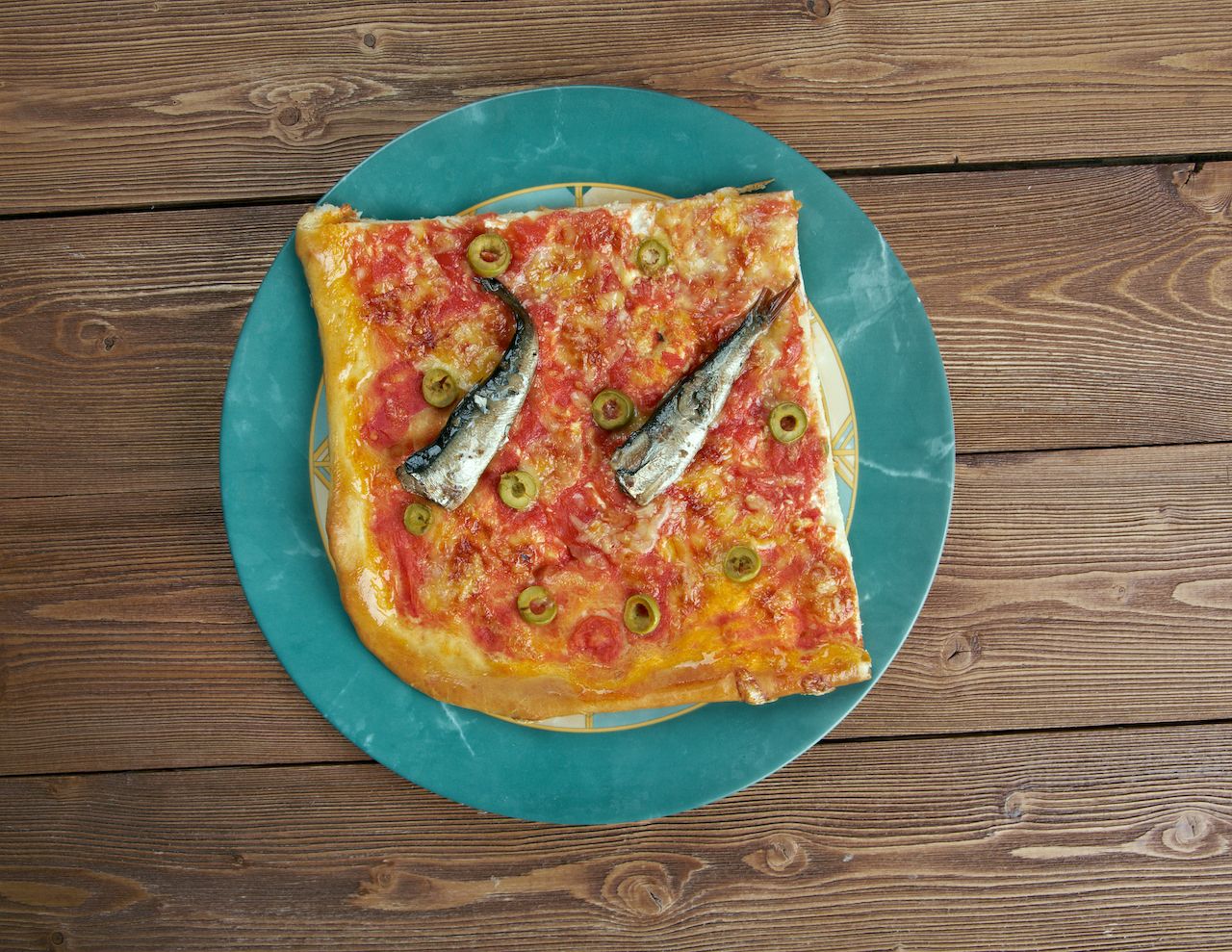 An old, traditional style of pizza that’s closer to focaccia loaded with toppings, rather than the tomato sauce covered pizzas we’re familiar with today. The style comes from Liguria and is topped with ingredients local to the region like olives, sardines, and anchovies. The name for the style comes from the Genovese Admiral Andrea Doria, who lived from the mid-1400s to the mid-1500s and, according to legend, invented this style of pizza himself. Though the original recipe doesn’t call for tomato sauce, tomato-covered versions are common today.