Italians take their pizza quite seriously, and nowhere in Italy takes it more seriously than the city of Naples. This is a major surprise to absolutely no one, but what you might not know — unless you’re fortunate enough to spend your working hours stirring sauce and pounding out dough — is that there’s an organization whose sole mission is to make sure that Neapolitan pizza remains free of false bravado. The group is called the Associazione Vera Pizza Napoletana, and its mission is to“promote and protect, in Italy and worldwide, the ‘true Neapolitan pizza,’“ according to its website. As an official office of the Italian government, the AVPN certifies Neapolitan pizzerias around the globe and keeps this UNESCO-protected culinary delicacy true to its original form. Plenty of places claim to have the best Neapolitan-style pizza, but few are certified straight from the style’s home city.

Neapolitan pizza is, at its core, a very simple pie. It is more popularly known as the pizza margherita, but before you start claiming your long-time love affair with this style, it’s important to understand that a real pizza margherita is built from a very specific list of ingredients. That frozen piece of cardboard from your neighborhood grocery store isn’t going to cut it.

The authentic pie begins with the sauce. The base spread must be built from one of two varieties of Italian tomatoes: Roma or San Marzano. No substitutions are allowed. If, for whatever reason, disaster struck and tanked the production of these tomatoes for a short time, then the availability of true Neapolitan pizza would shrink. The cheese on an AVPN-certified pizza must be Mozzarella di Bufala Campana, a mozzarella sourced from semi-wild water buffalo in Italy’s Campania and Lazio regions. The dough should be made from high-protein wheat flour and preferably kneaded by hand though a slow-speed mixer is allowed.

The only other ingredients should be basil and olive oil — and, in some cases, a light dusting of parmesan. Statista lists that there are nearly 80,000 pizzerias in the United States. Of those, a mere 98 are certified by the AVPN as authentic Neapolitan. Only 29 states across the country have a certified Neapolitan pizzeria.

It’s no small task to be certified, and those that are will likely let you know it. But beyond certification, a pizzeria’s menu is another sign of authenticity. The best of the best focus on Neapolitan pizza and not much else. If your local joint has a buffalo chicken or Canadian bacon on the menu, odds are the chef has strayed from the passion of the OG pie that the AVPN works so hard to uphold.

If you want to make sure you’re getting the real thing, start with the best. 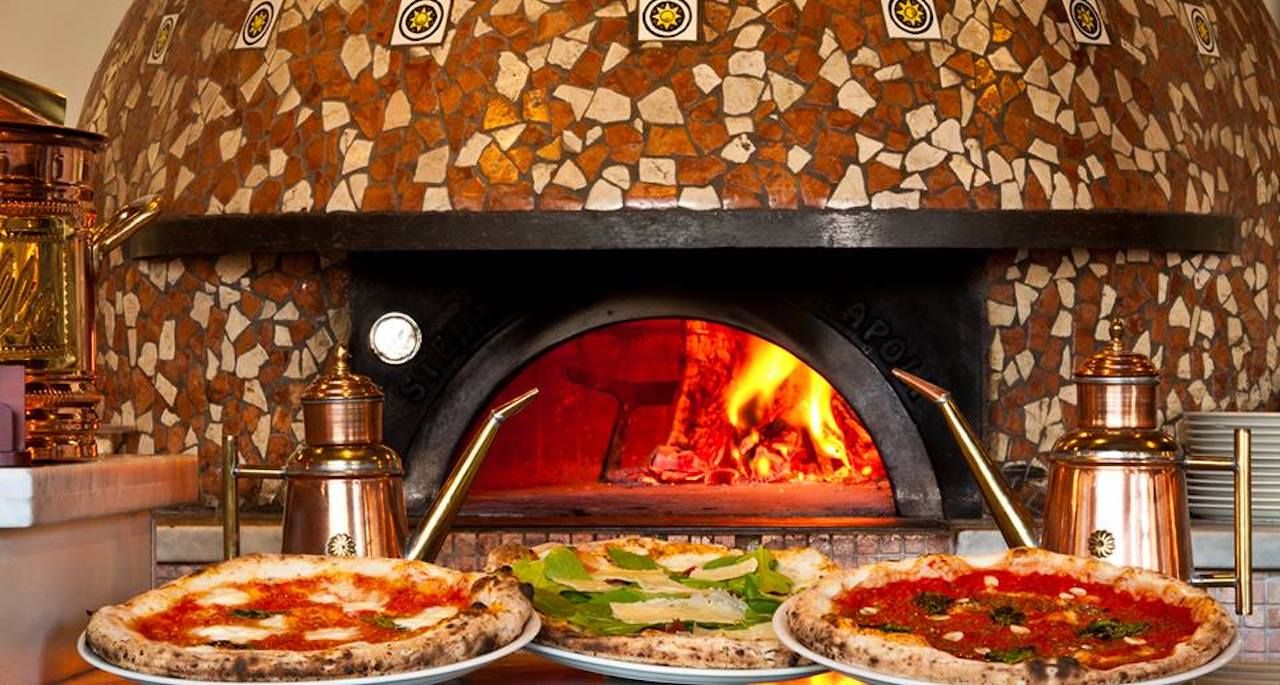 One of the fastest ways to gauge the Neapolitan-worthiness of a pizza restaurant is to look at what they’re serving to drink. If the place is pushing Coors Light and shots of Jager, not a good sign. Fine Italian wine presented by a server who can actually explain the grape? Now you’re talking. California is home to 18 of the 98 AVPN-certified joints in the country. Among stiff competition, Settebello has risen to the top by focusing on the basics: pizza margherita and very slight variations of it along with a selection of red wines to bring out the flavors. The brand’s simple formula saw success, and locations can now be found across the western US in California, Salt Lake City, and greater Las Vegas.

Live entertainment isn’t the only thing Nashville does well. Music City is also home to a stellar dining scene, and the true pizza hound should head straight from the airport to Porta Via Ristorante e Bar. Tennessee’s lone AVPN-certified pizzeria serves a small, carefully curated menu of Italian dishes, but your attention should be on the section called “Certificato.” Here is where the prize lives, the Margherita DOC, or Denominzione D’Origine Controllata. Order one for yourself along with a cup of zuppa, and don’t share any of it. Once you’ve finished, have a look at the restaurant’s damn fine cordials menu to help the awesomeness settle in before you head out to Music Row. 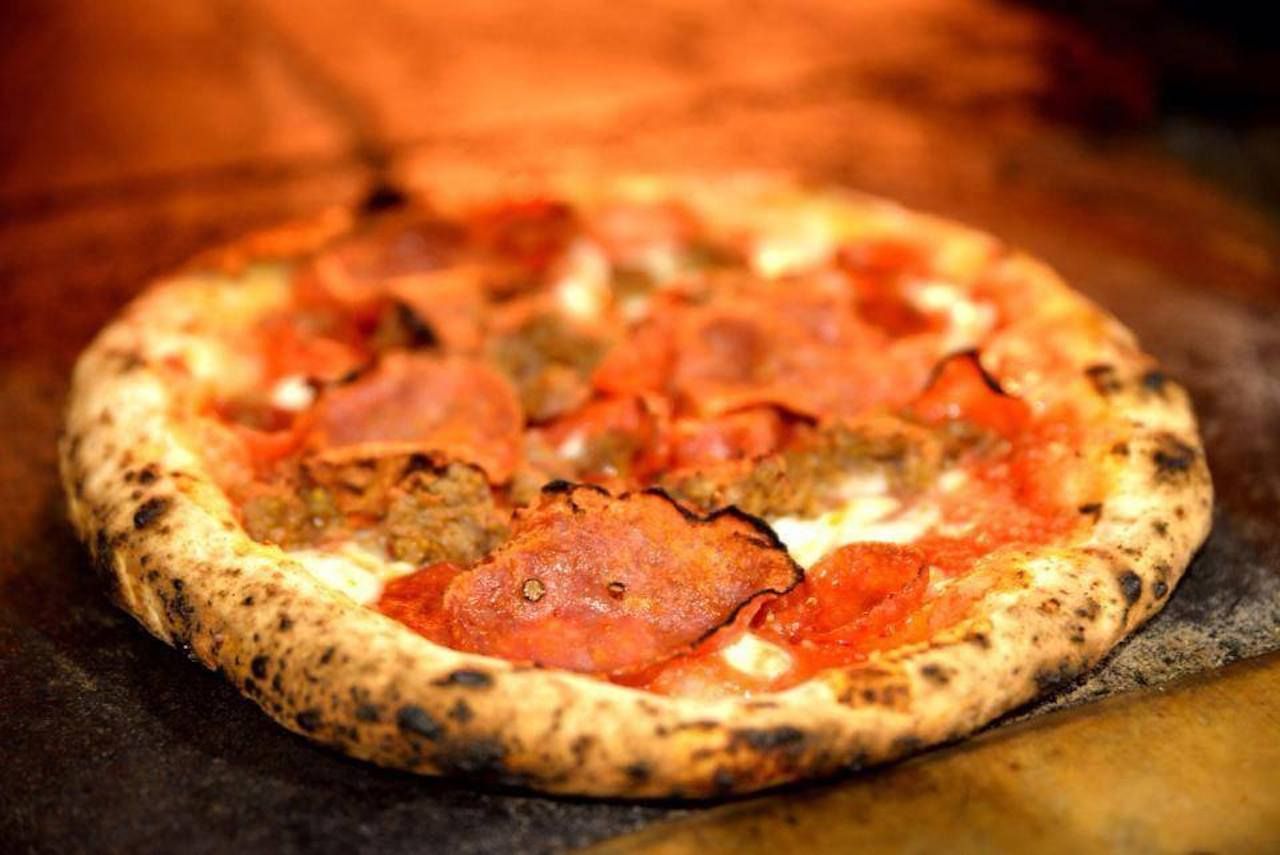 Pieous is a humble joint, the type of spot where 100 percent of the owners’ time and effort goes into making pizza, and everything is essentially an afterthought. The restaurant is casual, and despite an appearance on Diners, Drive-Ins, and Dives, it remains a place for college kids and the local blue collar crowd. Don’t worry about the lack of a website; just consider that more time the restaurant spent on perfecting its recipe. This is Austin, after all, the kind of place that beats to its own drum. Pieous’s phenomenally pounded dough is the standout of its AVPN-certified pie. You’ll get more crust per capita here than anywhere else on the list. That doesn’t mean they’ve skimped on what’s in the middle, however. The sauce, basil, and mozzarella di bufala charge forward with a vengeance to complete the pizza margherita experience.

There are few places in the world where one can eat as good as people in Maine do on the daily. Portland is among the country’s top restaurant cities, though for the best pizza in the state, head north on Highway 1 to the town of Belfast. Here, at Meanwhile in Belfast, you’ll settle into a small dining room just steps from the harbor and be instantly transported across the Atlantic. The guy tossing your pie is as Italian as the tomatoes and cheese on top of it, and you’re going to need that serrated knife on your table to dig in because they don’t slice their pizza around here. The crust is built from sourdough and cooked in a wood-fired oven. Despite being a casual kind of place — this is Maine, so don’t forget your flannel — reservations are encouraged because the experience has developed cult status among East Coast pizza aficionados.

Where: 2 Cross Street, Belfast, ME 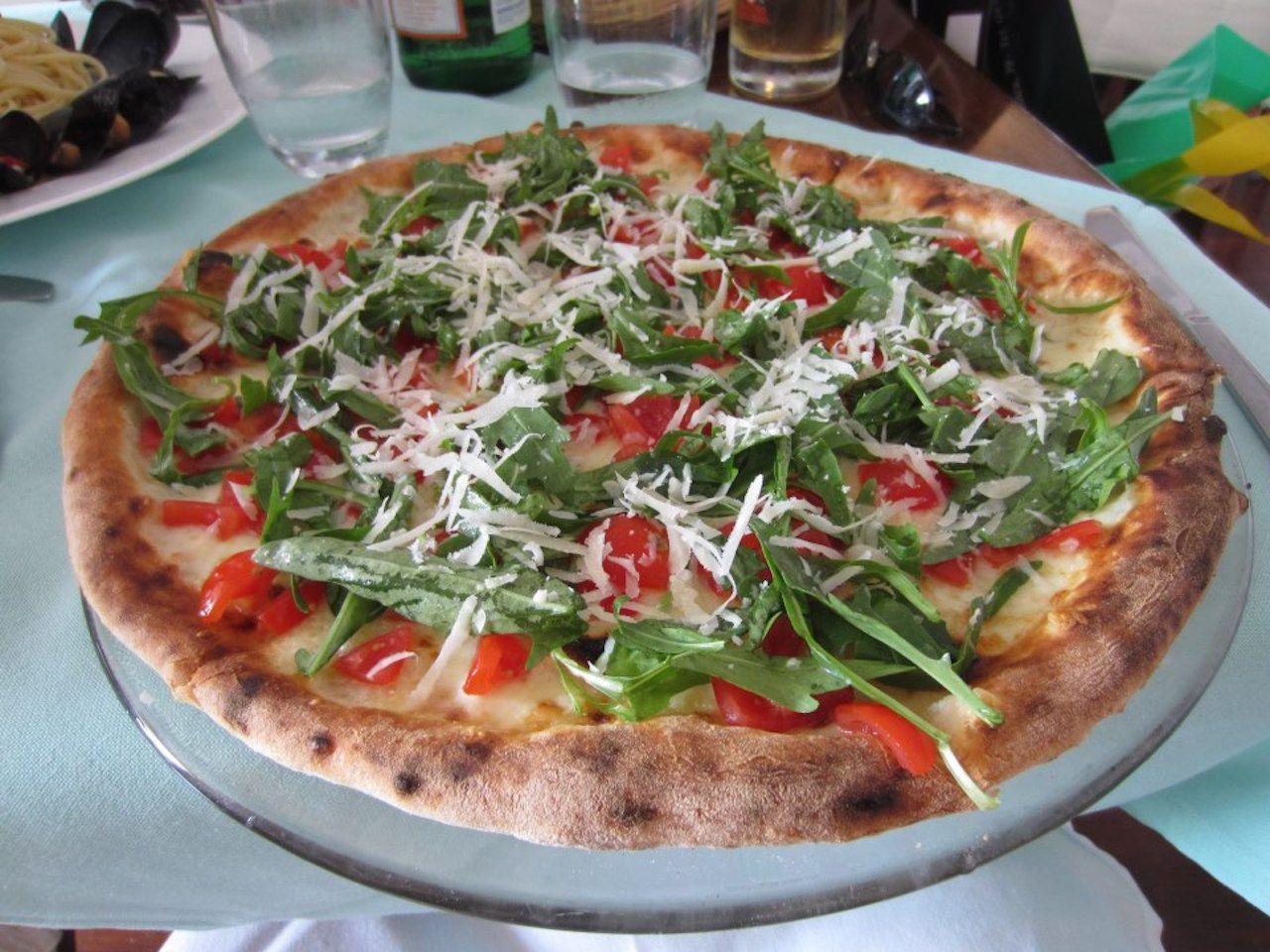 Anyone who doubts the pizza chops of the Midwest beyond Chicago has never been to Sheboygan. This town of 50,000 people just north of Milwaukee has two AVPN-certified pizzerias. Il Ritrovo, in the heart of town off Pennsylvania Avenue, is a Wisconsin experience as memorable as a dog and brew at Miller Park. Substitute the dog for pizza and the brew for a bottle of wine, of course. The pies are as classy as the setting, and the specialità della casa is known as the Margherita Maxi e Bufala. The restaurant has an on-site deli and market, so you can take a bit of the goodness with you when you leave.

Recall again the discussion about ambiance from above. Despite its simplicity, Neapolitan pizza maintains a level of sophistication — even in Chicago, where thick pizza and cold beer are a time-honored tradition. Case-in-point: Coda di Volpi in Lakeview. Chef Chris Thompson’s menu doesn’t brag about its AVPN certification, and it doesn’t need to. The wood-fired Margherita Di Bufala pizza shuts up any naysayers, right down to the fact that he serves the pies with authentic pizza shears so you can have the fun of cutting into it yourself. The pie is Italian, but the dining room is standard Chicago. So, lively, fun, and the perfect place to build a Saturday evening around. It’s an experience that’s almost as good as that time the Cubs won the World Series but without nearly as long of a wait.

7. Via Tribunali in Seattle 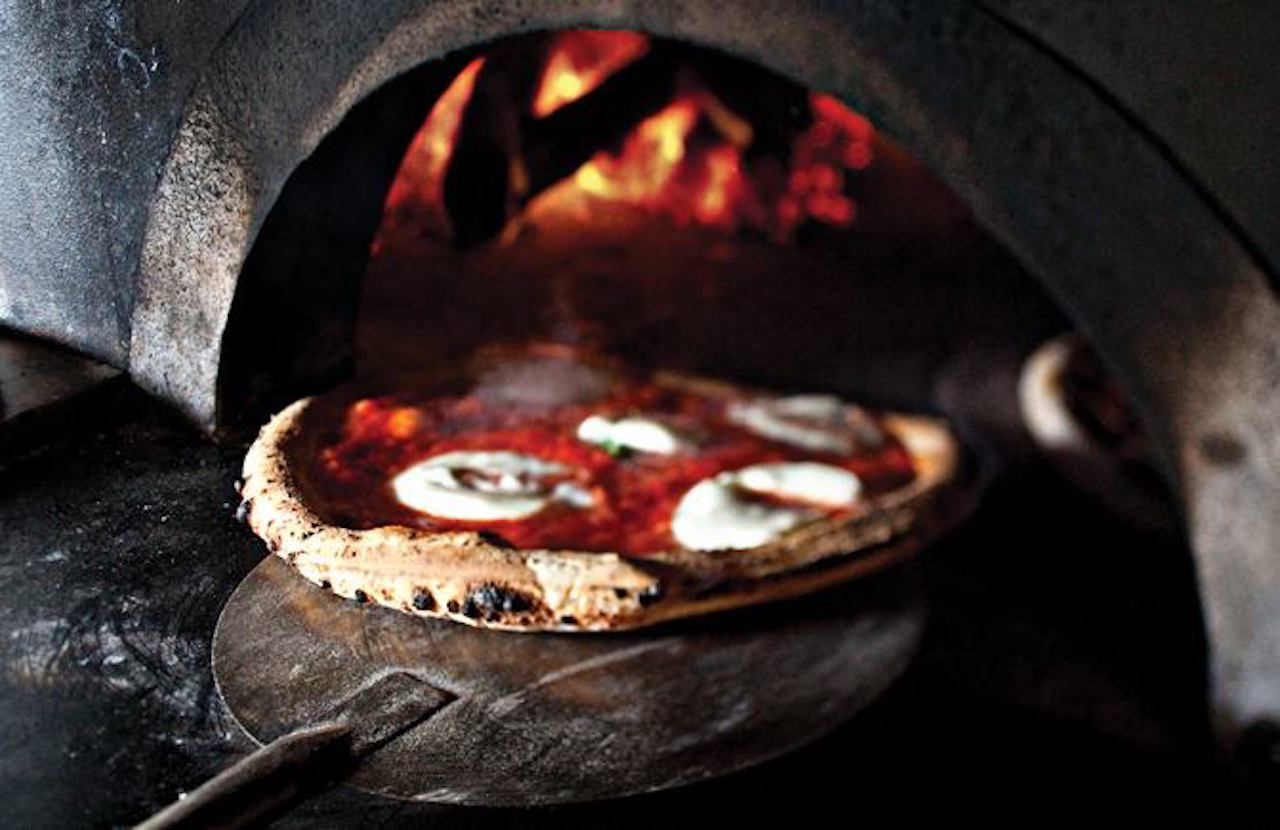 Via Tribunali’s four Seattle locations — in Capitol Hill, Fremont, Georgetown, and Queen Anne — are cozy and warm. You can almost feel the heat of the pizza oven each time the staff exits the kitchen. They like their mozzarella di bufala in big, thick chunks on the pie here, melted in gooey puddles atop a thick layer of sauce. This is the kind of place you go on a first date when you can’t decide between formal and semi-formal, but know that the meal itself needs to stand as the focal point. Start with an insalata di parma, and order a margherita pie for both of you. Your date is sure to be impressed. The wine list is as authentically Italian as the pizza, which should help you loosen up the tongue and really turn on the charm.