Naples is usually thought of as a gateway to the beautiful Italian islands that lie a short sail away from its busy port. It’s rarely a destination in its own right. Many cruise tourists come home bemoaning the short time they spent in Naples before getting shuttled to the Amalfi Coast, knocking the city for its crowded streets, dilapidated buildings, and perceived danger — thanks to uptight, outdated guidebooks that would have you believe every person in Naples is out to rob you.

Despite the bad press, though, bustling and noisy Naples is a vibrant, culturally rich city that’s long overdue for an embrace from visitors. It’s the birthplace of pizza (that alone merits your respect), and it’s packed with internationally important archeological finds. It has a spirit of generosity and offers a view into Italian life not obscured by tour group flag poles. Of course, you should watch your valuables and avoid unknown areas after dark, but that’s true in a lot of big cities. Here’s why we love Naples — and why you will too.

It has diet-destroying street food. 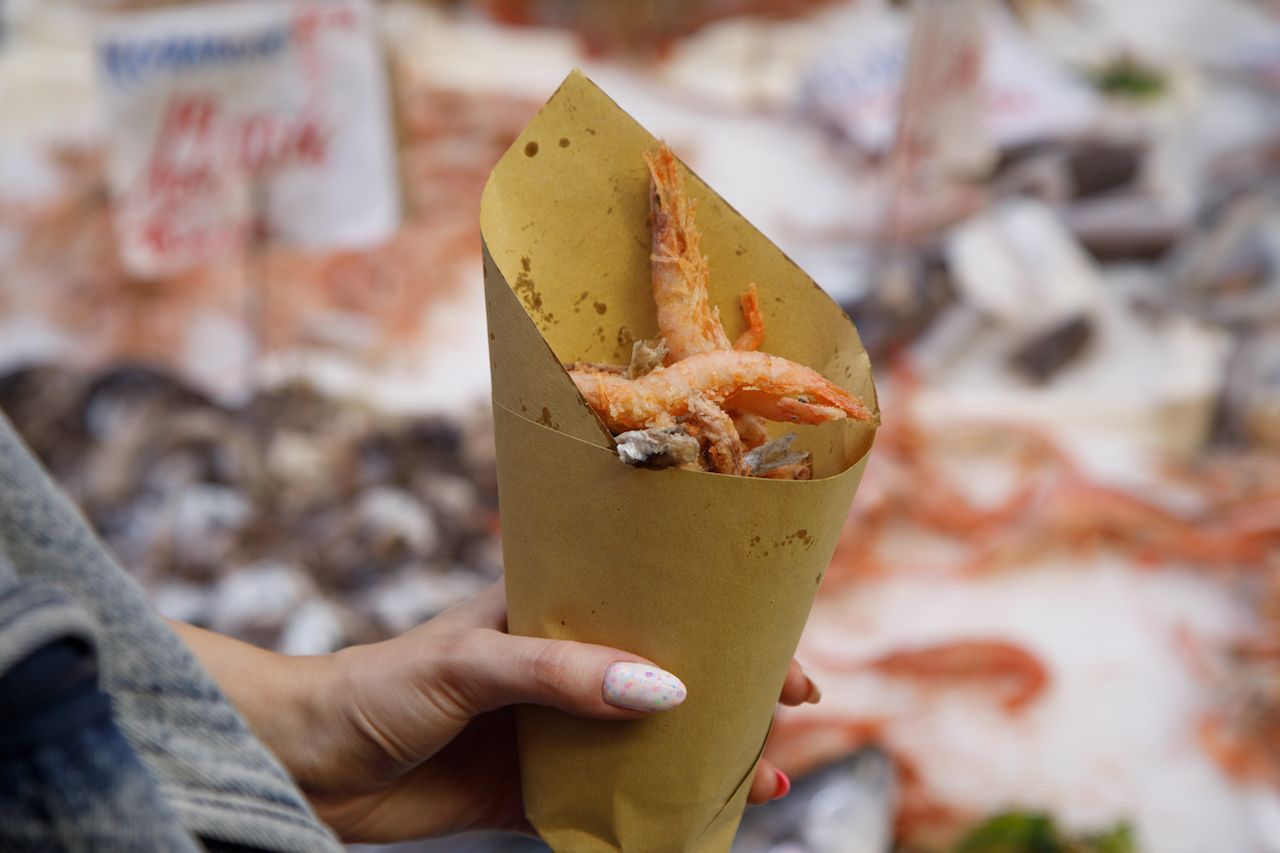 Plenty of Italy’s most famous dishes were once the food of the poor, and Naples’ street food is no exception. From small shops and stalls around the center, you can order these calorific, often deep-fried snacks to go. Among the most prevalent are fried pizza, which can be tried at the historic La Figlia del Presidente, and the cuoppo, a paper cone filled with various deep-fried morsels like fish, mozzarella, or potato croquettes, which you can order to go from Fiorenzano. You can also find pizza a portafoglio, a folded slice to make street side eating convenient, or a frittatina di pasta, deep-fried pasta with mozzarella and tomatoes. 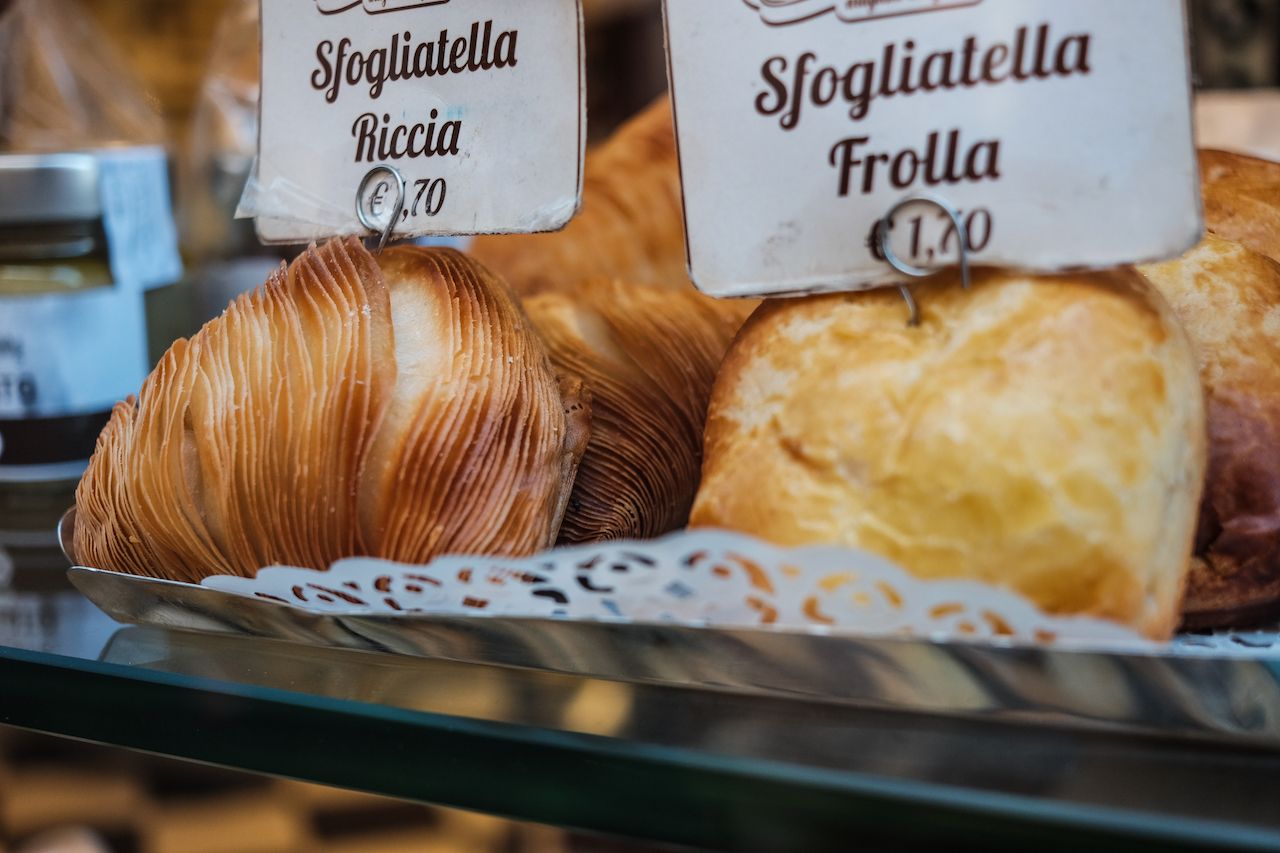 Mornings in Naples are no less indulgent. You’ve got to celebrate a city that condones having a rum-soaked pastry with your morning cappuccino. Naples’ street-food stalls are complemented by pastry shops selling yet more calorie-rich food. (The “Mediterranean diet” is a myth.) Two pastries you should try are sfogliatelle, shell-shaped flaky pastry filled with ricotta and candied citrus peel, and babà al rum, which has a doughnut-like consistency and is soaked in plenty of rum. Try Pasticceria Capparelli in the historic center for a babà of generous proportions.

Charity is performed with coffee. 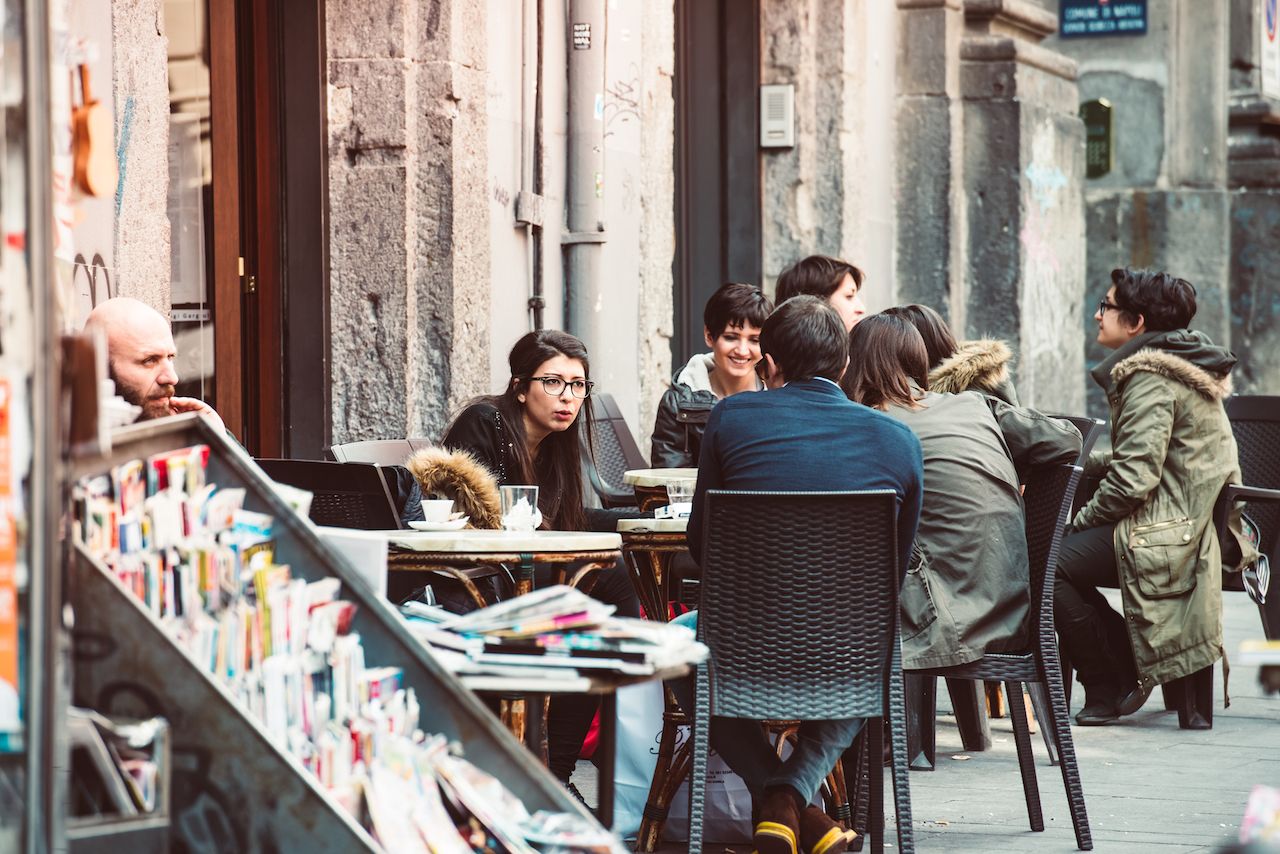 The phenomenon of paying for two coffees so that the second can be given free of charge t in Italian and ‘o cafè suspiso in the Neapolitan dialect). This is a local custom you should definitely adopt — and then bring back to your home country.

Locals take to the streets. 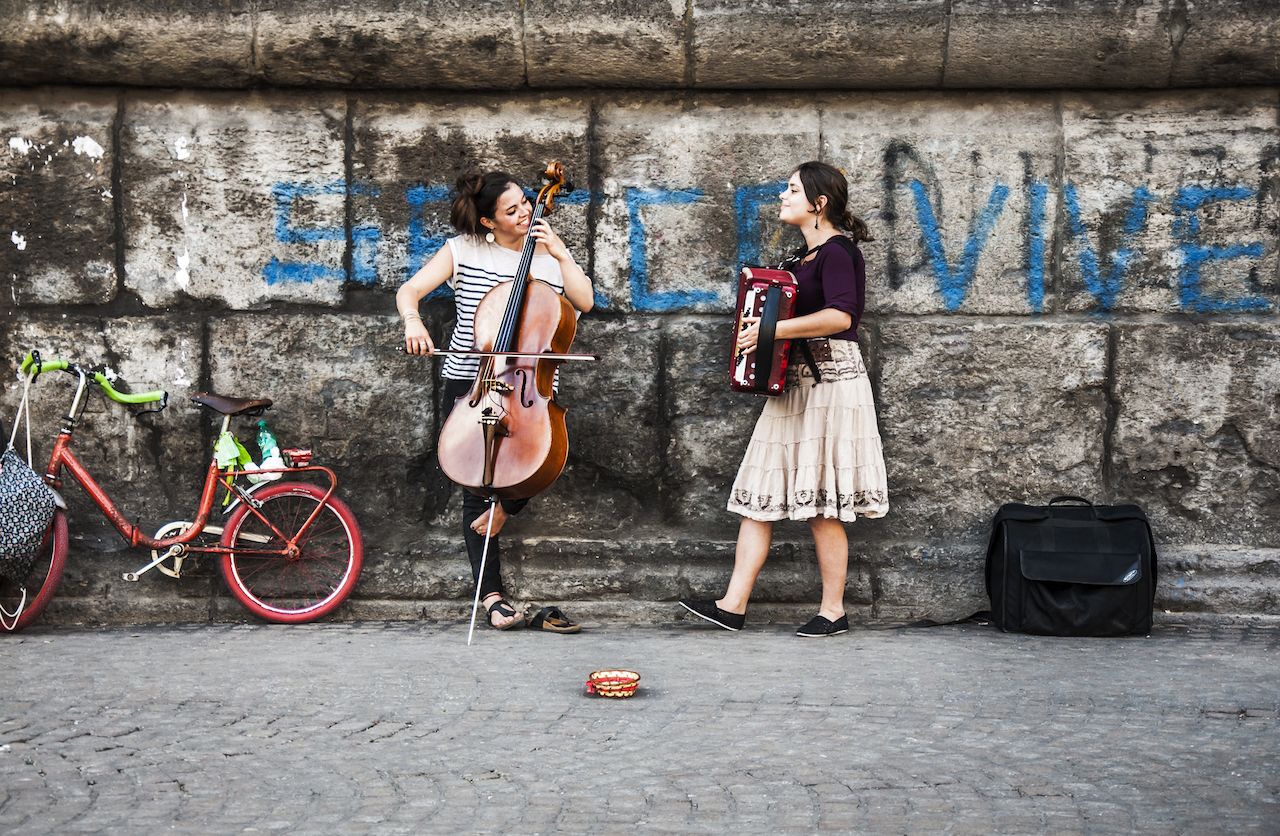 Naples is known in general for its sense of community and communal living. You’ll see people sitting outside their front door on a kitchen chair watching life go by, laundry drying out on the street, and impromptu outdoor concerts in the evenings hosted in piazzas. All you need to do is walk around and adopt the attitude of the flanêur, or lounger, who, as poet Charles Baudelaire put it, finds “immense joy” in both observing and being part of his surroundings.

It’s a center for archeological study. 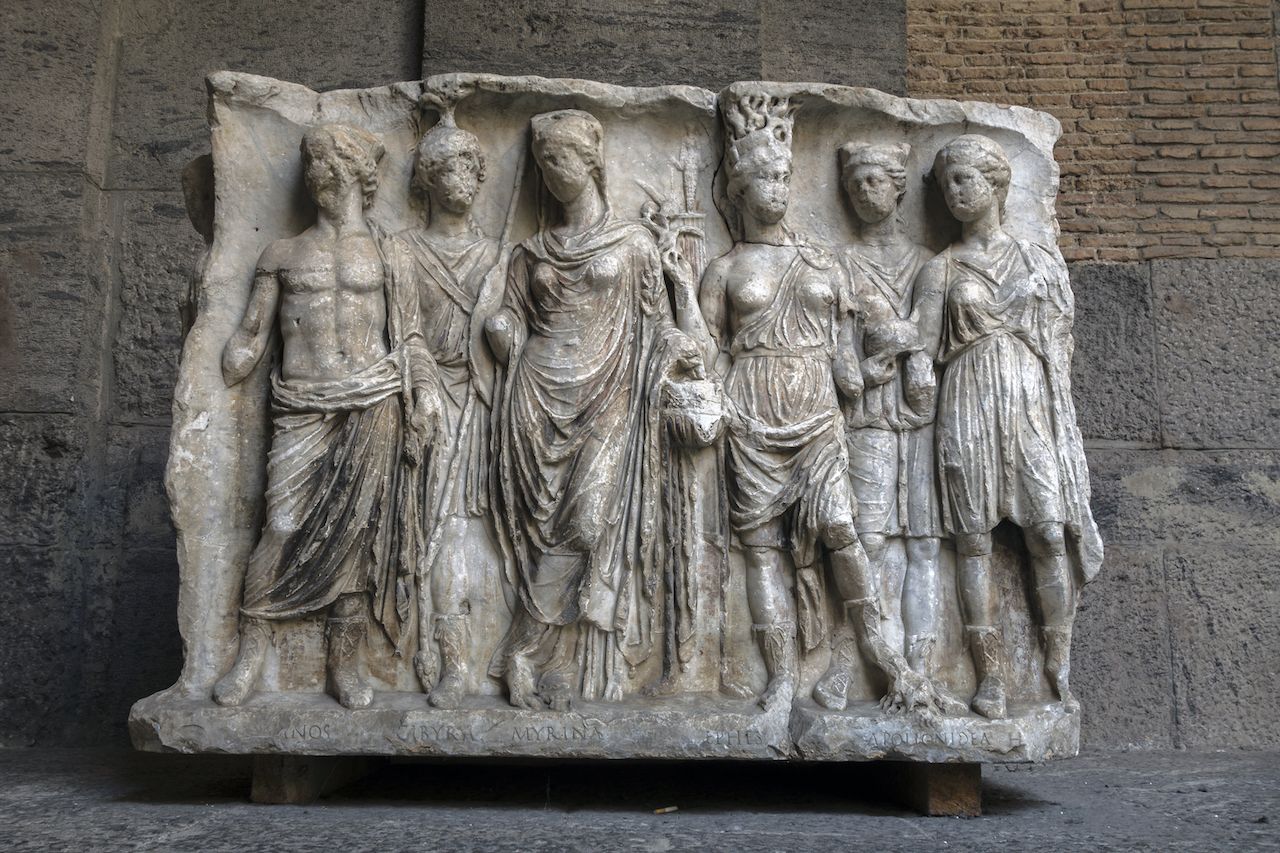 There’s beauty — if you know where to find it. 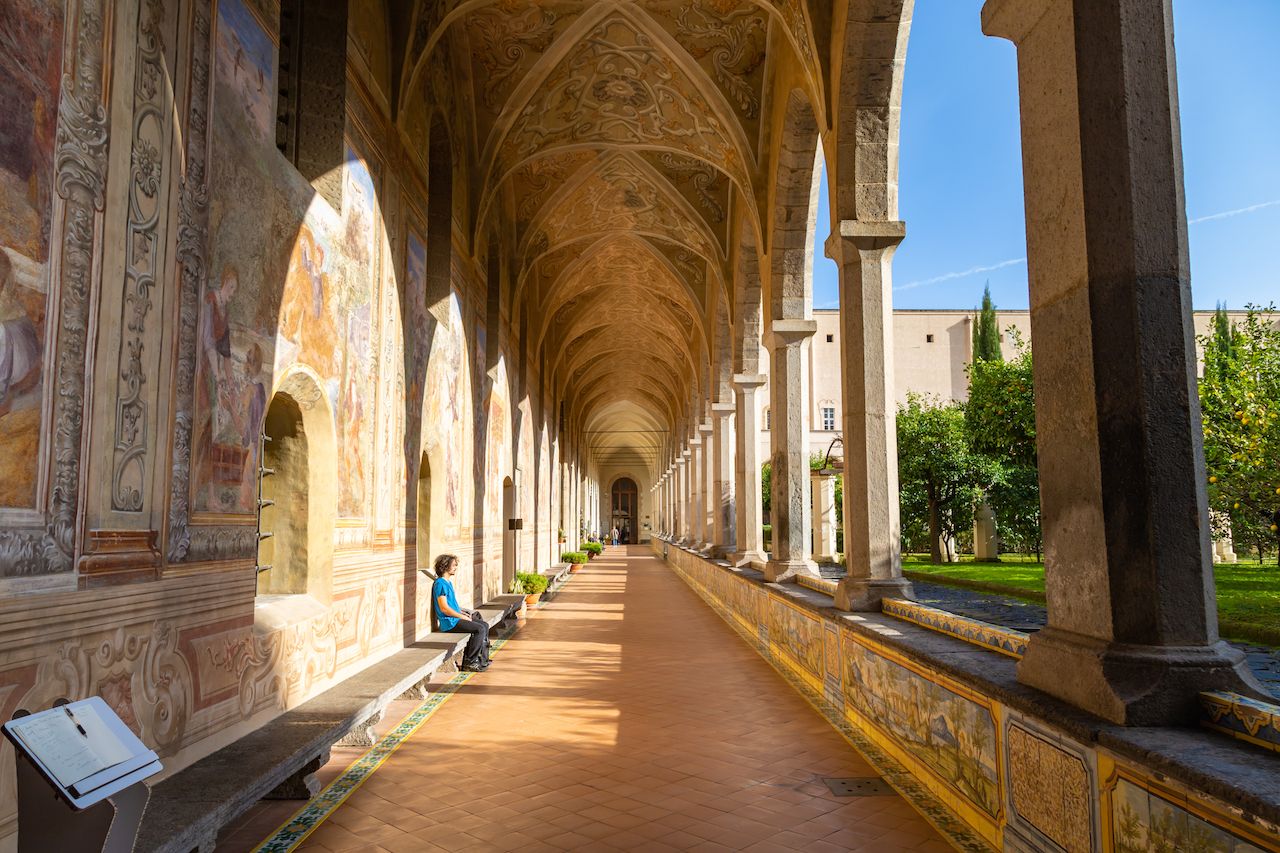 Naples is sometimes seen as a sprawling metropolis with trash-filled streets due to frequent strikes; disorderly traffic; and dark, narrow alleys. But there are also extremely beautiful pockets of the city. One self-professed “oasis of peace and tranquility” is the Santa Chiara monastery. The cloister is covered in sunny colored tiles decorated with flowers and leaves, and you might see a gardener unhurriedly tending to the lemon trees. Another way to escape the chaotic streets is to climb Via Petrarca in the Posillio area, where you will get a panoramic view of the bay of Naples with ethereal Mount Vesuvius beyond. 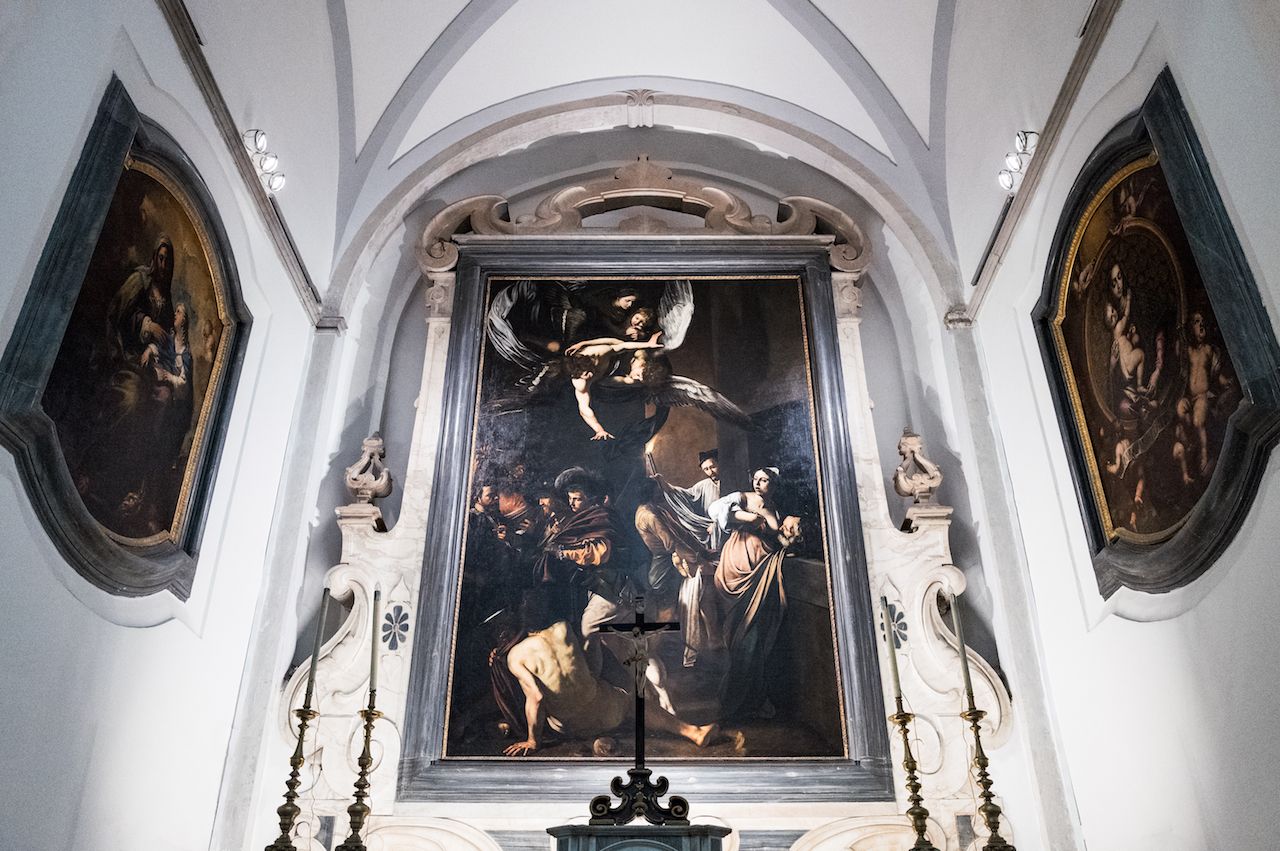 The Veiled Christ in the Sansevero Chapel is one of the most arresting, and possibly most beautiful, representations of the dead Christ. The way the gossamer thin fabric drapes over the body makes it hard to believe it’s been sculpted from marble. Naples was also the home of the great Baroque master Caravaggio, once when he was facing a death sentence for murder. His dark, brooding scenes and dirty peasant representations of religious figures meant many of his works were considered shocking and blasphemous at the time. You can see his Seven Works of Mercy in the Pio Monte della Misericordia gallery, his Flagellation of Christ in the Capodimonte Museum, and his Martyrdom of Saint Ursula at Palazzo Zevallos. 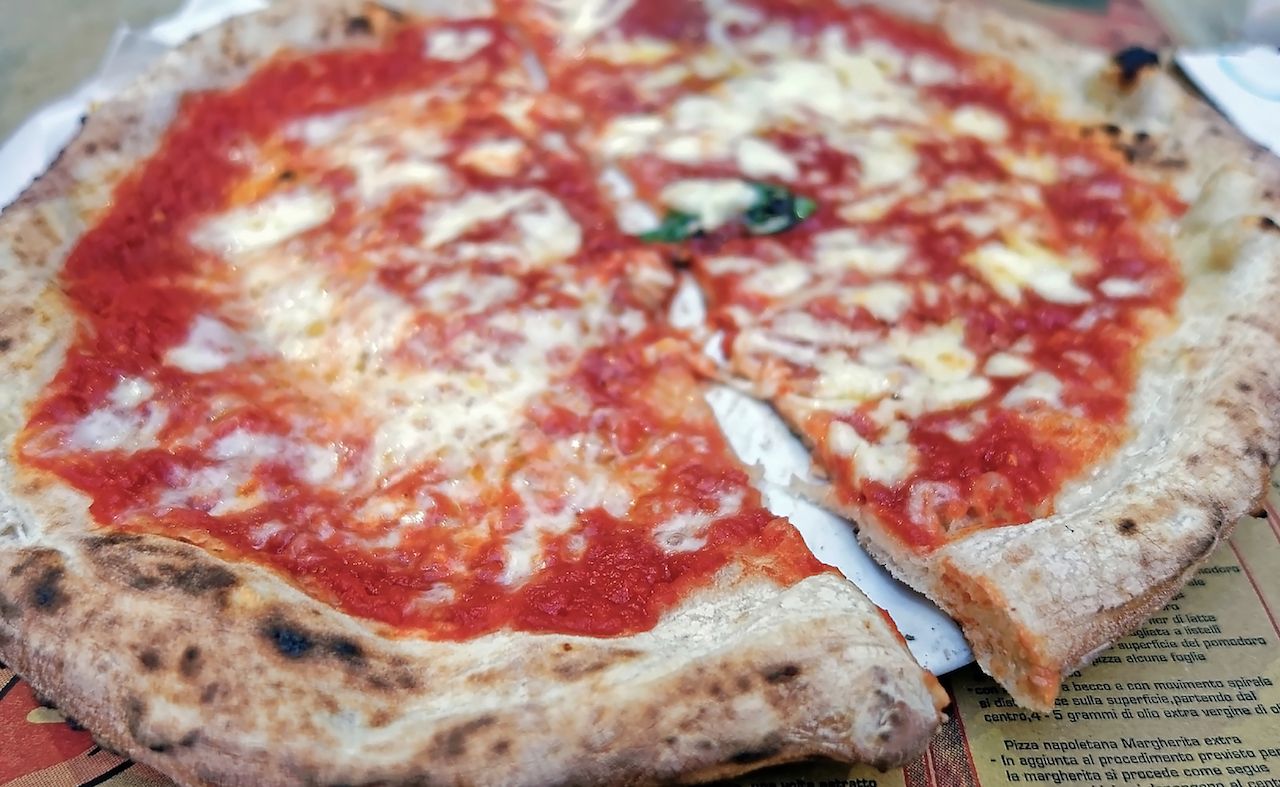 Finally, Neapolitan pizza has been given the recognition it deserves. The art of pizza-making in Naples was designated by UNESCO as intangible cultural heritage in 2017. The work of the pizzaiolo, or pizza maker, involves four key stages of preparation, including the famous rotating of the dough. Beyond turning out really, really good grub, pizza-making in Naples is an art that brings together several generations, as young apprentices learn from their veteran masters. To choose where to eat a real Neapolitan pizza, look out for the Associazione Verace Pizza Napoletana (AVPN) signs above restaurant doors, meaning it boasts a certificate from this regulatory body, or opt for places with a long line. Pizzeria Sorbillo is considered by the AVPN as one of the best places to try traditional Neapolitan pizza, and it’s run by one of the oldest pizzaiolo families in Italy.

CulturePadua Is the Answer To an Overcrowded Venice
Tagged
Culture Naples, Italy
What did you think of this story?
Meh
Good
Awesome

The Perfect Five-Day Itinerary for the Bay of Naples, Italy’s Most Fascinating Region

8 Signs You're Still a Tourist in Naples, Italy