Both Padua and Venice lie in Italy’s Veneto region in the country’s northeast, but while Venice has recently had to introduce tourist taxes for day-trippers to deal with its over-tourism issue, Padua is crowd-free and tranquil. With one of the most ancient universities in Italy along with daily food markets, stunning buildings, and the claim of being the inventor of Aperol (the essential ingredient for a Spritz), Padua is the perfect alternative to Venice. Here are some ways you can enjoy a stay in Padua.

Check out the amazing frescoes. 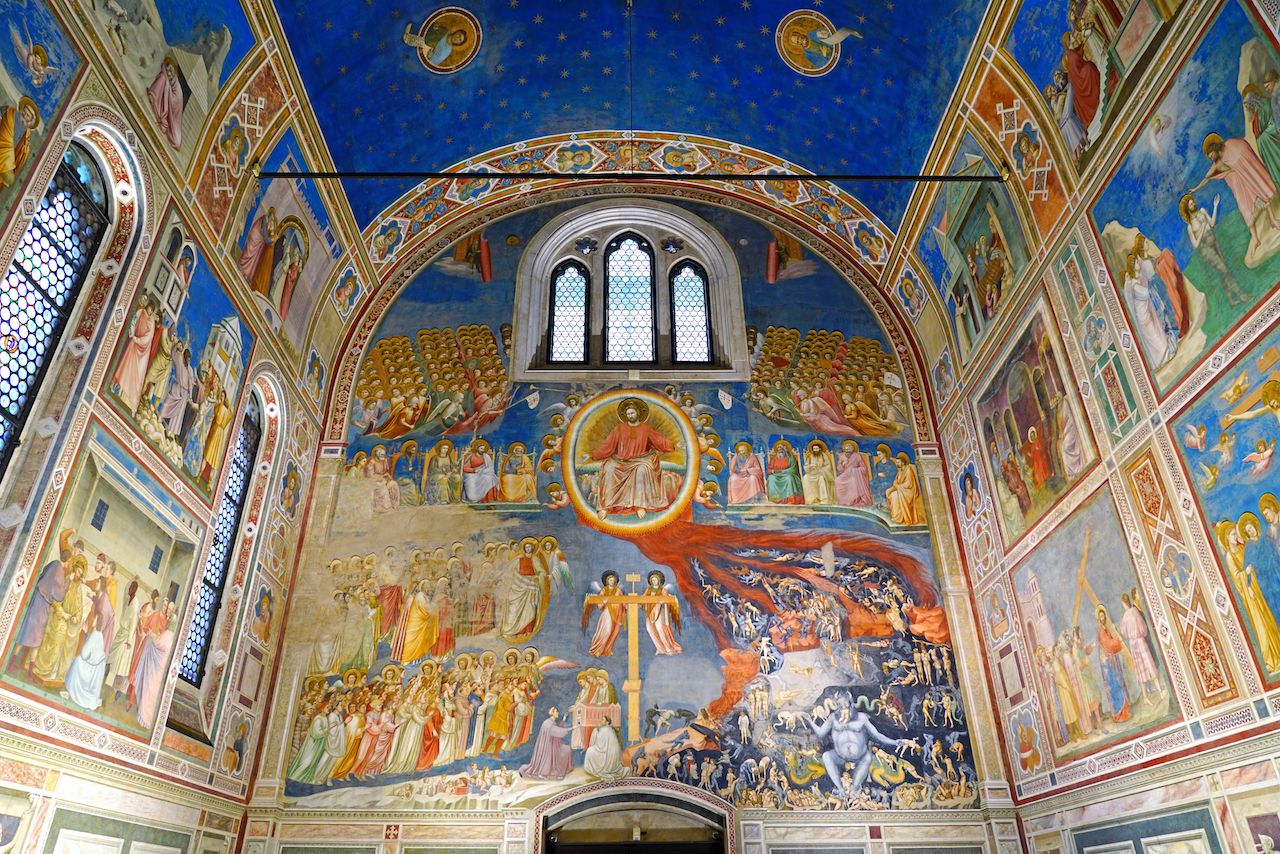 In Padua, there are three monumental fresco cycles that visitors should check out.

The most famous is the Scrovegni Chapel, frescoed by the 14th-century master Giotto. You’ll want much longer than the 15 minutes they allow for visits (a restriction in place to prevent damage to the frescoes) as you follow the biblical scenes peppered with mysterious, humorous, and innovative artistic details.

The second cycle can be found in the Baptistery beside the Cathedral of Padua. It has a separate entrance to the right of the Cathedral and charges a small fee. Its domed interior is entirely covered in 14th-century frescoes by the artist Giusto de’ Menabuoi, and the cycle is considered one of the most important of that century after Giotto’s work. Look up at the hypnotic concentric circles of saints and angels in the dome, and try to spot the various many-headed beasts of the apocalypse around the walls.

Finally, visit the ornate hall of the Palazzo della Ragione for a fresco cycle of even bigger proportions. This Palazzo reputedly has the largest unsupported roof in Europe, as well as many feet of frescoes all around the walls depicting biblical scenes, astrological signs, and allegorical puzzles.

Wander around a pedestrian-friendly center. 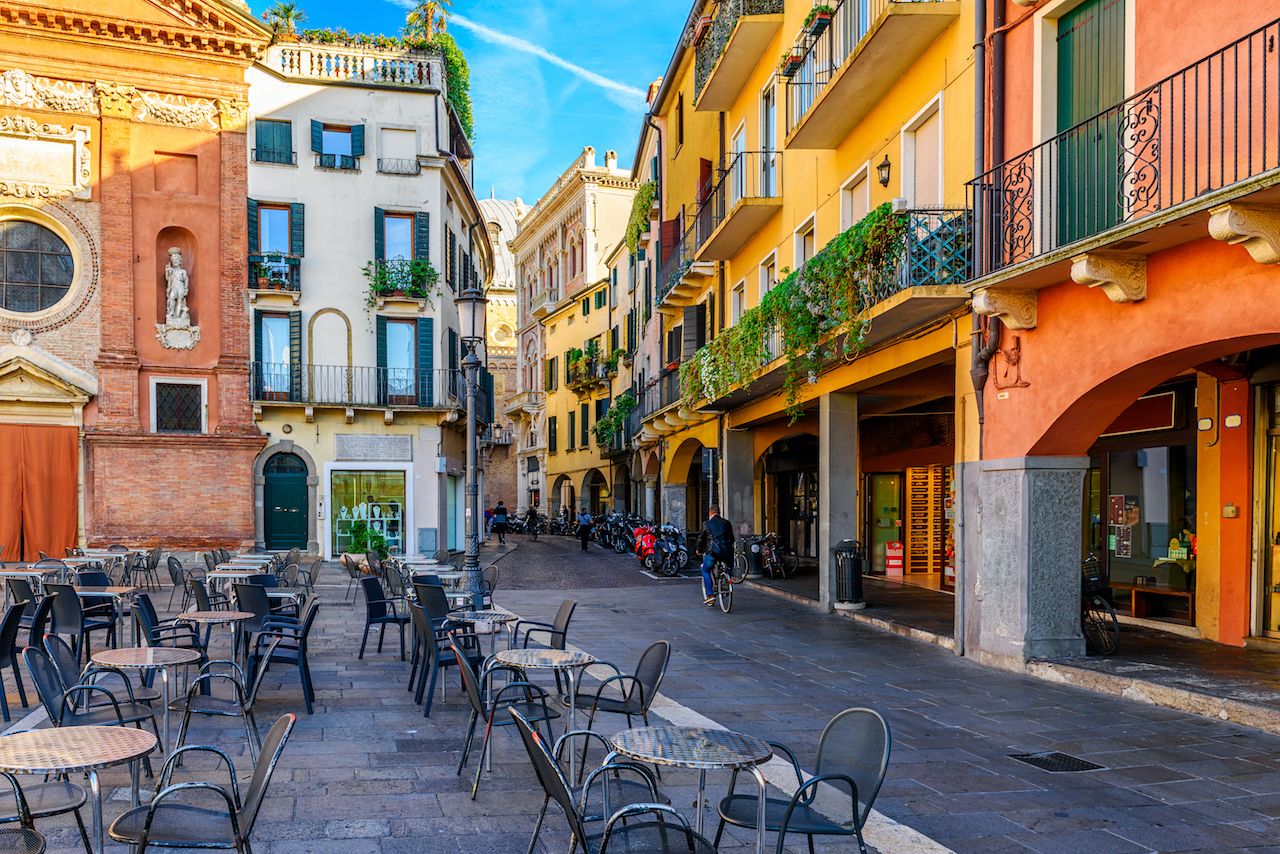 One of the appeals of Venice is the lack of cars. But Padua, too, is a walking and cycling city. Almost all of the old town has restricted access to vehicles, and there are several big pedestrianized squares in the center. These squares are given over to daily markets and plenty of outdoor seating for Italy’s café culture scene. The narrow streets in the center are flanked with amazing architecture, making it a real pleasure to wander around.

Explore the old center and pop into the shops along the way. Via S. Martino e Solferino, in the old Ghetto, is full of quirky little stores, such as tea shop Dolciaria with a surprisingly extensive range for a country with such a coffee-driven culture, fabric shops that will make you immediately want to redecorate your home, and antique shops with everything from bibles once belonging to nobility to gilded religious sculptures.

Try the local food at the daily markets. 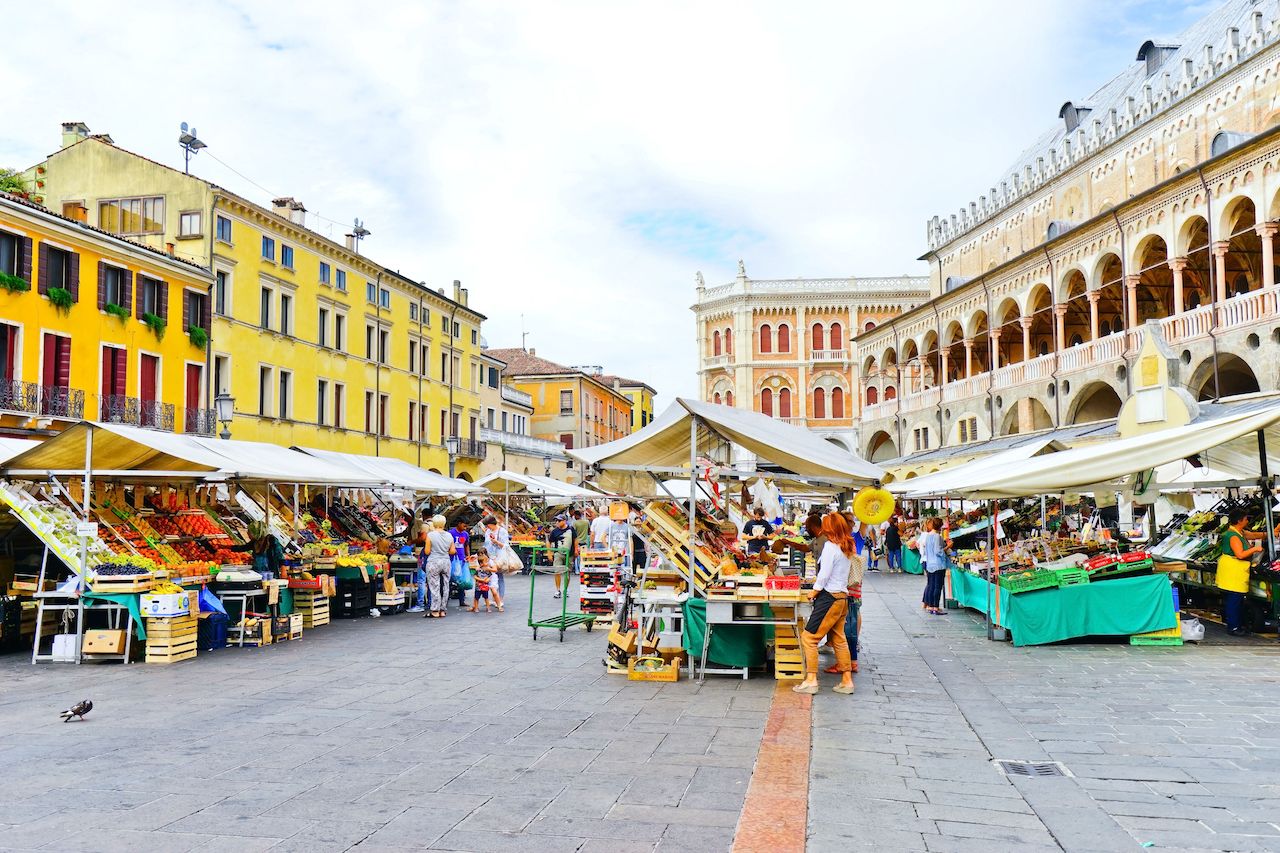 There’s no need to step inside an anonymous supermarket if you stay in Padua. The daily markets, both outdoor and indoor, have every food item you could desire. Before you get down to the business of buying, take some time to wander around and take in the atmosphere; you’ll find sellers greeting their customers by name and asking if they want their usual order, shoppers stopping for a pre-lunch glass of wine at one of the bars in the covered market, and a good deal of noise as vendors try to get customers’ attention.

Head to the outdoor market in Piazza delle Erbe for vegetables and fruit, all beautifully arranged. Produce here is seasonal and fresh so ask the seller what they recommend and they’ll surely give you some cooking tips passed through their family for generations along with the vegetables.

Inside the covered Sotto il Salone market, you’ll find delicatessen stalls, butchers, fishmongers, and bakers. Stop by I Trulli for fresh cheese from Puglia, like burrata and stracciatella, Da Giacomin for giant rounds of parmesan, and Salumeria al Desco for regional cold meats like prosciutto and salami. This is also the perfect place to try some of Padua’s street food cuisine. You can sample light, fluffy focaccia from Violante’s Deli or takeaway tartar from Tartare 18. 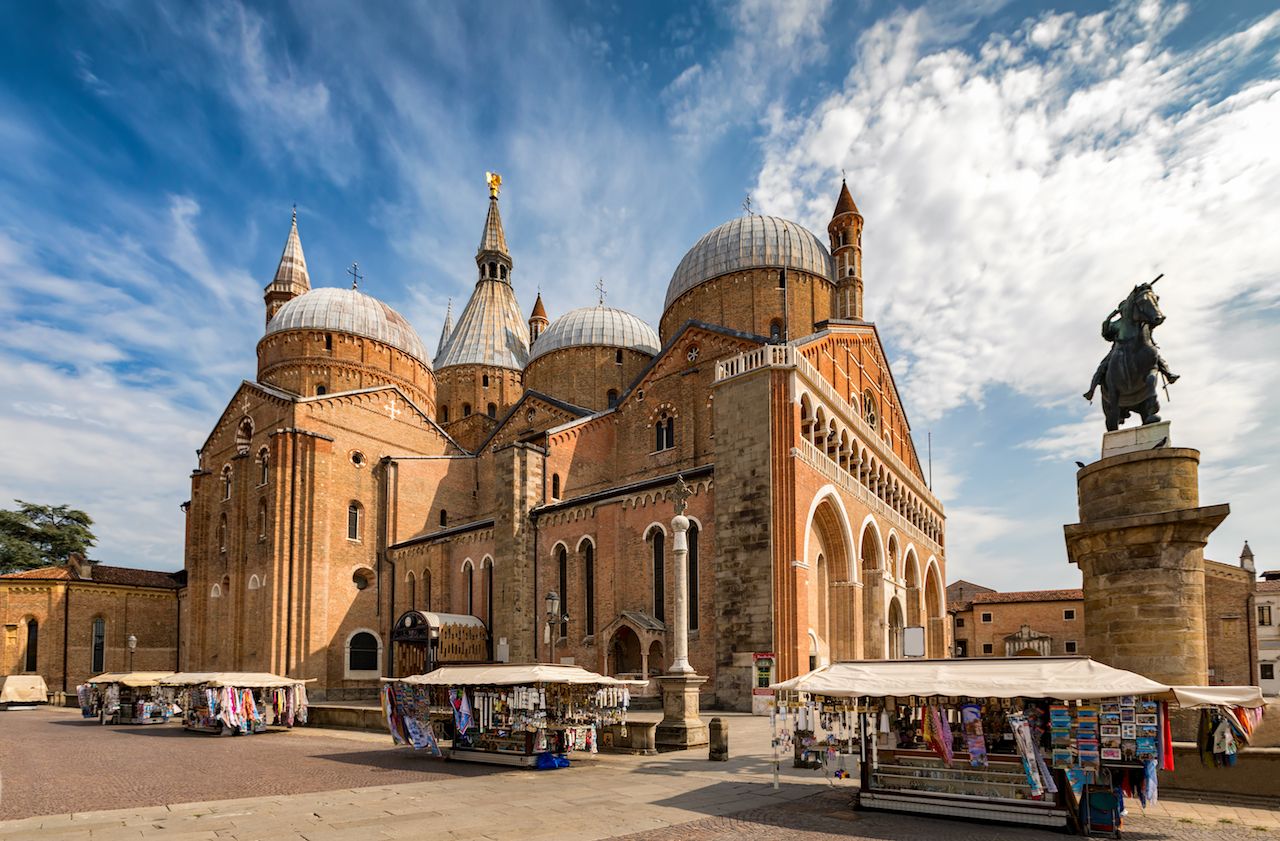 As well as its frescoes and churches, Padua is famous for its tre senza, or the three “withouts.” This curious claim to fame refers to three of Padua’s most important monuments. The first is the Caffé Pedrocchi, known as the café without doors. Once a meeting place for students, academics, and intellectuals, it supposedly used to be open 24 hours, hence having no need for doors. The elegant bar is now a sophisticated, if a little costly, aperitivo spot and definitely somewhere that should be on your pre-dinner drinks route.

The second is the Prato della Valle, the second-largest square in Europe. It’s known as the “lawn without grass,” as its name prato translates as lawn, but there is only a small section of grass in the vast square (a recent addition). The attractive oval space is decorated with statues and obelisks and hosts fruit and vegetable markets, flower markets, and a monthly antique market, which is well worth a rummage if it coincides with your trip.

Finally, Padua has a mysterious saint without a name. This refers to its patron saint, Saint Anthony of Padua, who is known in the city simply as Il Santo. The Basilica di Sant’Antonio di Padova is also referred to as the Basilica del Santo. That being said, you may hear the occasional exclamation “Sant’Antonio da Padova!” in the streets as it is a kind of tame blasphemy used here.

Be inspired by historic places of learning. 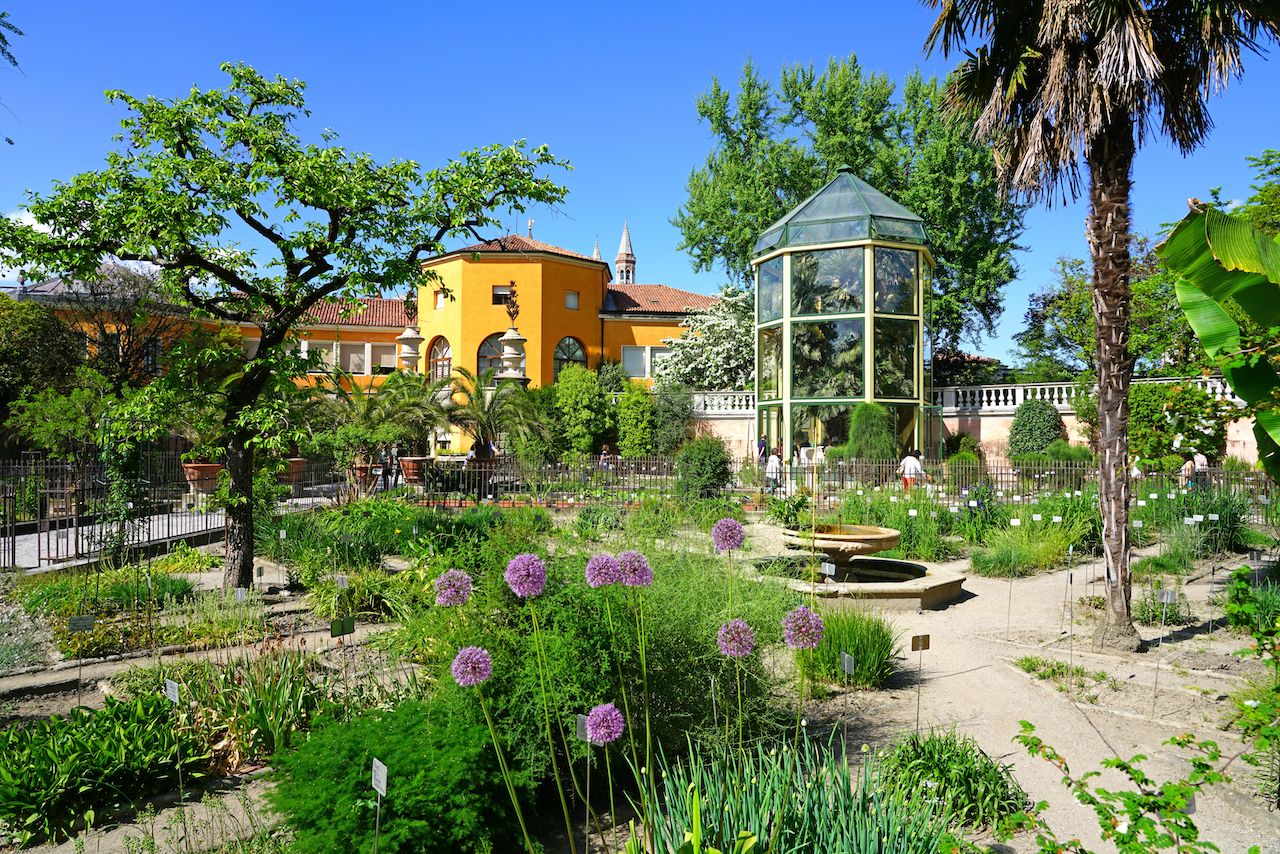 Padua’s university is one of the city’s top cultural attractions. Founded in 1222, it quickly became a pioneering place of scientific learning under its motto Universa Universis Patavina Libertas, or “complete liberty for all at the University of Padua.” It has seen students, researchers, and professors from all over the world under its roof, astronomers Copernicus and Galileo among them.

Some of the most important developments in anatomy and medicine came out of Padua, from groundbreaking human dissections by anatomist and physician Andreas Vesalius in the 16th century to the first human heart transplant in 1985. You can experience some of this firsthand by visiting the 16th-century Anatomical Theatre, a wooden-paneled room formed like an inverted cone with a series of concentric tiers for spectators. One warning — be prepared for a few grizzly stories on the tour.

Following another branch of science, you can also visit the Botanical Gardens, the oldest university botanical garden in the world and a UNESCO heritage site. It was integral to the studies of medicinal plants for medical students and also to the Italian culinary scene as these gardens introduced new species to Italy, such as sunflowers, potatoes, and jasmine. It’s the perfect oasis on a hot summer’s day, and it offers guided tours and educational workshops for all ages.

Try a world-famous drink where it was invented. 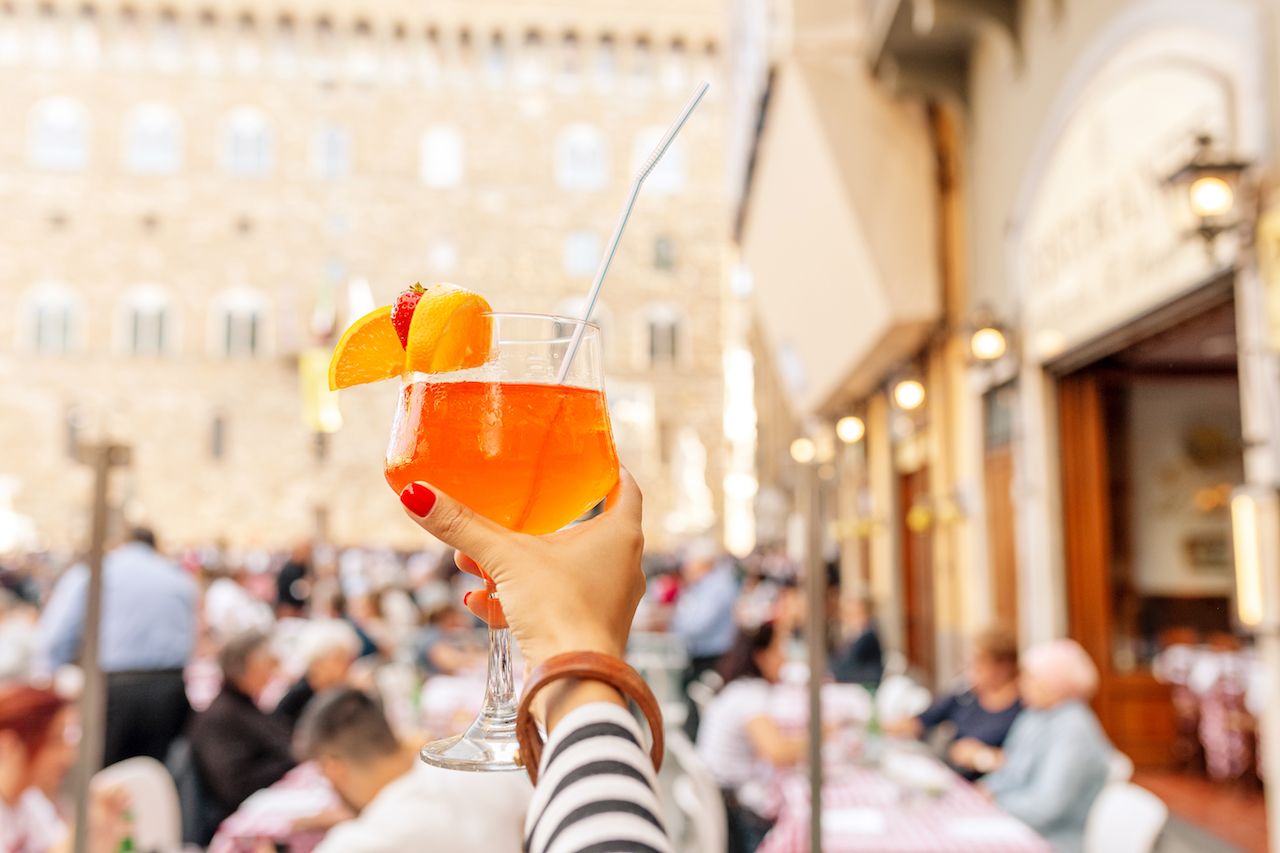 Padua is, in fact, hallowed ground aperitivo-wise as it was here that the essential ingredient for Spritz was created. Aperol was originally produced by the Padua-based Barbieri company, although now it is made by the Campari company. Sit outside in the sunshine at one of the bars in the main squares (Piazza delle Erbe, Piazza della Frutta, or Piazza dei Signori) to sample a Spritz while indulging in some people watching. Alternatively, take a tour of some of Padua’s more atmospheric drinking dens, such as the rustic Corte Sconta or Jamaican-style bar La Yarda, which may play reggae music but does very Veneto-style food and drink.

CultureAnzio Is the Most Relaxing Day Trip From the Chaos of Rome
Tagged
Culture Insider Guides
What did you think of this story?
Meh
Good
Awesome