If you’re able to visit Mariposa Grove in Yosemite, the Kathmandu Valley in Nepal, or Pompeii in Italy today, it’s because the sites were protected and saved by conservation efforts. The United Nations Educational, Scientific, and Cultural Organization (better known as UNESCO) is the international governing body that declares endangered sites worthy of the world’s highest legal protection. UNESCO strives to ensure that sites of cultural and natural significance attract sustainable tourism and protection in the hopes that the sites and the people who live nearby will thrive. As with many other endangered sites, the following 11 places are on UNESCO’s “World Heritage Sites in Danger” list because of already ascertained or potential dangers like war, urbanization, human behaviors, or natural disasters. They’re each incredibly fascinating and still under threat, as the fragile balance between humans and heritage is in constant negotiation. 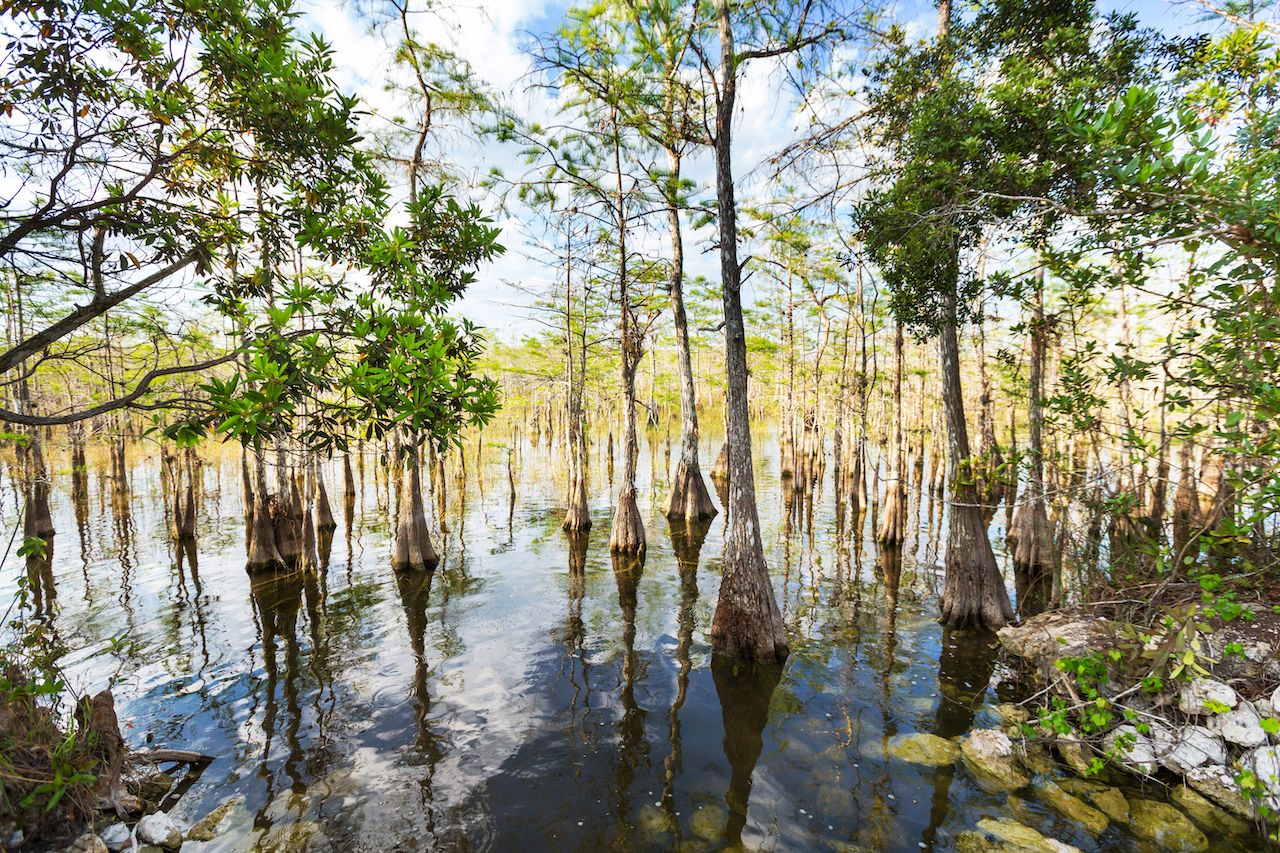 The subtropical Everglades, located in Florida, is North America’s largest designated wilderness area where a slew of aquatic and terrestrial ecosystems meet up to house more than 20 rare, endangered, and threatened species. Florida panthers, leatherback turtles, and manatees are a few of the better-known animals the ‘Glades protect, and it’s the only place in the world where American crocodiles and American alligators coexist. The 1.5-million-acre national park also contains both the largest mangrove community and sawgrass prairie, rendering it vital to wading birds’ breeding and migration. Threats to this fascinating preserve include urban development, hunting, and mercury poisoning to name a few. It’s not difficult to visit the park, and there’s plenty to do — like canoeing, cycling, and learning about the indigenous Miccosukee tribe’s practices. 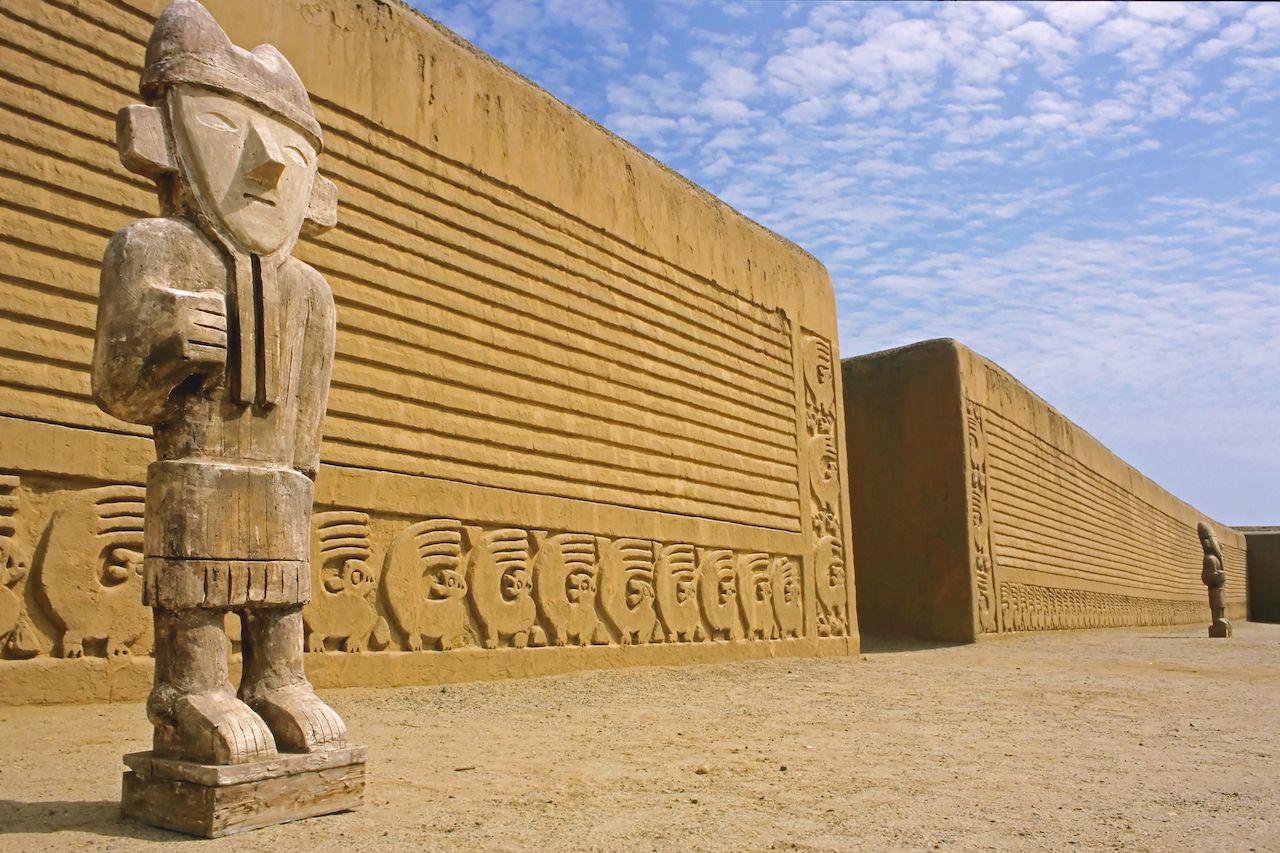 Situated on Peru’s north Pacific coast, Chan Chan was the capital of the pre-Inca Chimú people, who from the sand built the largest city in pre-Columbian America. The city was divided into nine autonomous citadels. About 2.3 square miles remain of what was once a much larger site. Roads, temples, agricultural fields, and some huge friezes are still there, but threats include climate, especially the increasingly volatile effects of El Niño on the earthen structures. Illegal farming practices in the nearby river valley also compromise the site’s protection. However, with the collaboration of Peru’s Ministry of Culture and many experts, UNESCO has helped restore and conserve much of the city. Chan Chan is easy to visit. It takes several hours to wander through the giant site. Hiring one of the Peruvian tour guides helps sustain the regional economy and discourage vandalism.

3. Rainforests of the Atsinanana — Madagascar 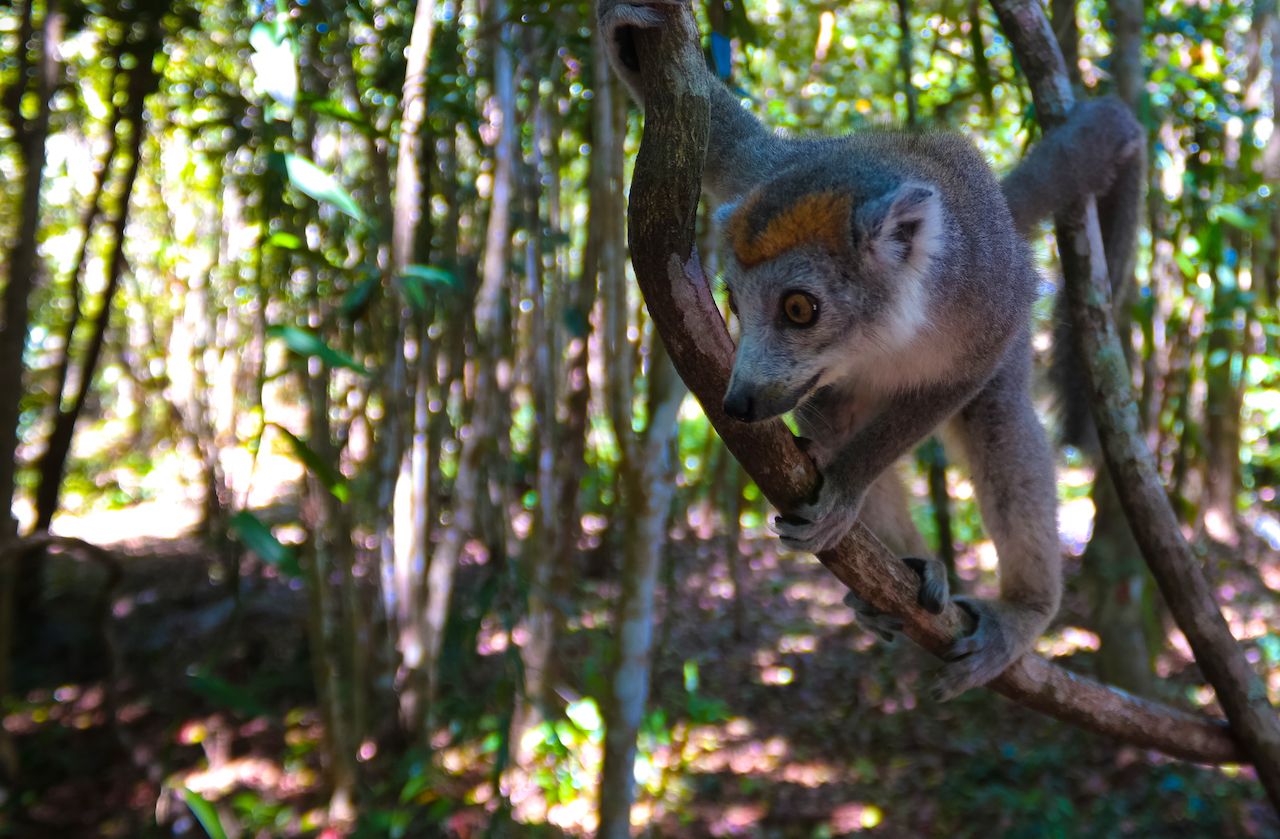 Six national parks combine to form this endangered site along the eastern side of the island of Madagascar. For the past 80 million years, when Madagascar broke off from Africa, plants and animals have evolved in isolation, and now, some 85 percent of the fauna and flora on Madagascar lives nowhere else. Primates are particularly threatened, especially lemurs. Management policies mitigate threats to biodiversity, like agriculture, gem mining, hunting, bushmeat poaching, and logging of rare hardwoods. UNESCO and Madagascar regulatory bodies seek to expand the parks while maintaining wildlife corridors between them. Infrastructure and transport on the island are iffy; most roads from the capital city Antananarivo are rutted-out dirt paths, and most rental car companies won’t rent to you without a professional driver. Boat rides are expensive. Many visitors base out of Masoala National Park and hire a local guide — especially if they, like most, want to see an elusive aye-aye. 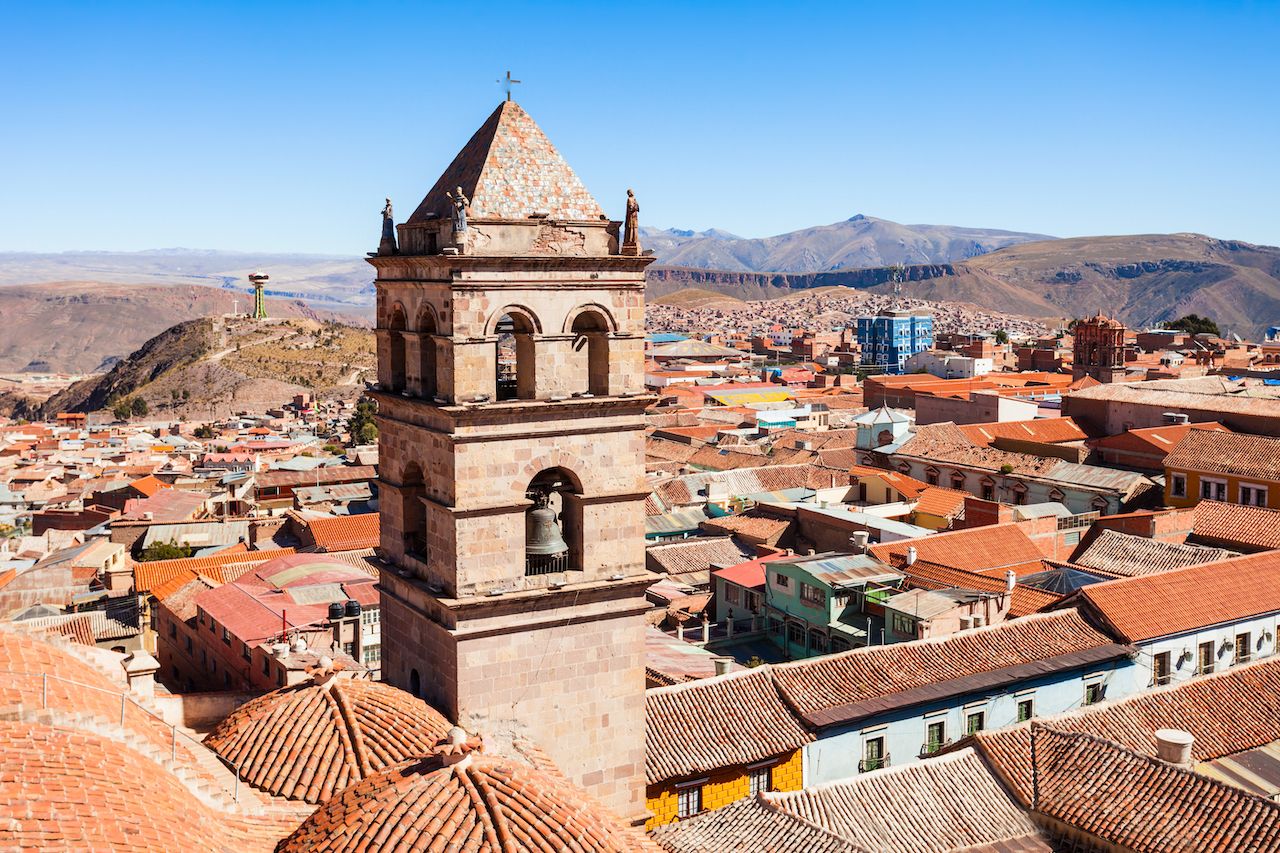 A more recent site of cultural value, the Bolivian City of Potosí was, in the late 1500s, perhaps the world’s largest industrial complex. At 13,000 feet elevation, Potosí was first a tiny Andean village, until Pizarro came along in 1572 and discovered the largest silver lodes in the Americas. Potosí became the main exporter of precious metals to Spain, and then Spain started building baroque architecture and arts in the area. Today, mines, mining-related infrastructure, Spanish-style churches, and the stunning mountain scenery remain. However, the mining technology of the time has left the mountains geologically unstable, and therefore the city, human lives, and the ecology are threatened. UNESCO calls for urgent action to reinforce against deterioration. Potosí is tourist-friendly with infrastructure and year-round temperate weather. The altitude takes some getting used to, though, so acclimate slowly to visit this endangered World Heritage site. 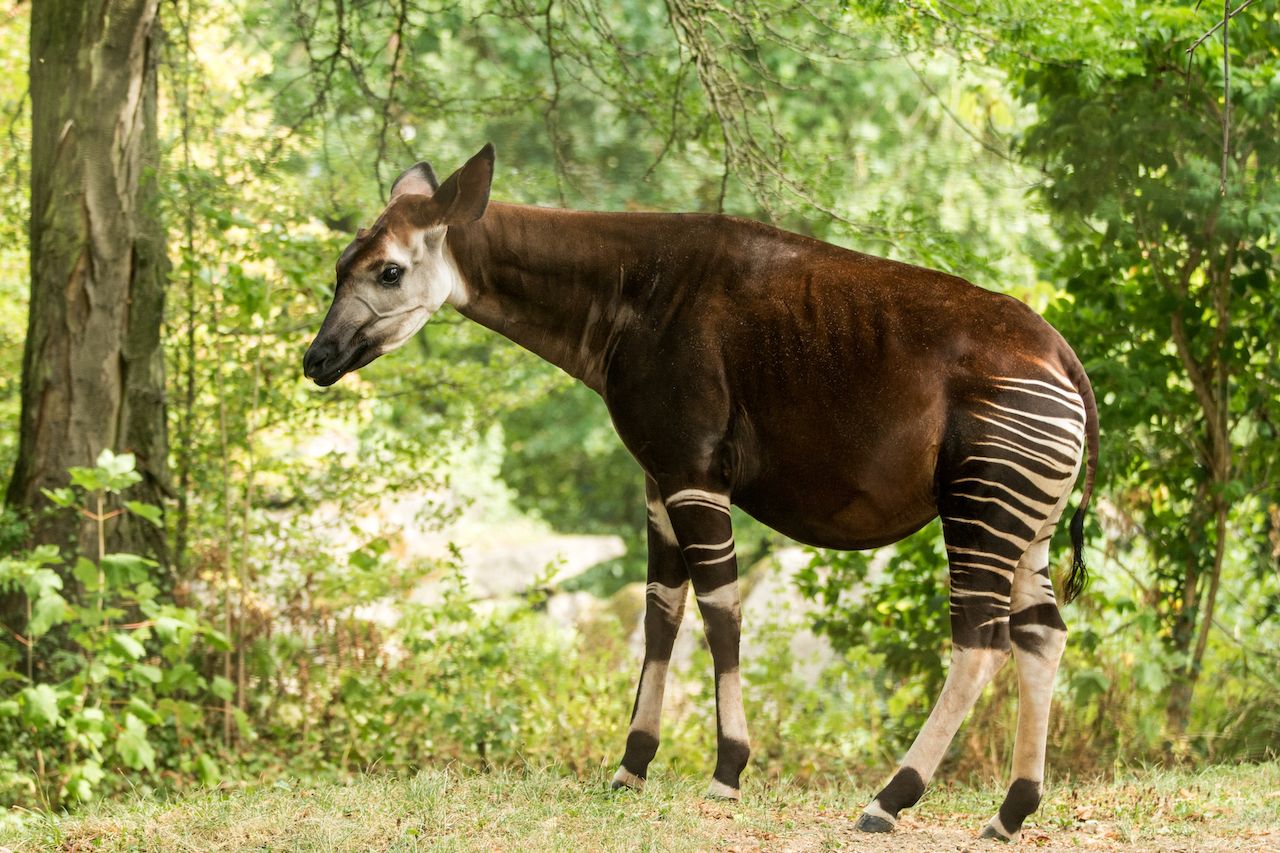 Okapis look like “zeers,” a fusion of zebras and deers, but they’re actually a forest giraffe — and one of the planet’s earliest mammals. They’re endemic to this eastern sector of the Democratic Republic of the Congo (DRC), and they peacefully graze among 7,000 chimpanzees, forest elephants, and the rare bongo and water chevrotain. The Okapi Wildlife Preserve makes up about 20 percent of the Ituri Forest. Protecting this forest is imperative for the wellbeing of the Efe and Mbuti pygmy people who rely on it for their subsistence. These cultures are involved with the protection and security of the preserve. All outsider hunting is prohibited (indigenous hunting is ok) but remains a threat to the ecosystem. Carefully planned roads traverse the forest, leaving wide corridors so wildlife is safe. The preserve is under fire from militias, which have twice blown up the park headquarters and nearby indigenous villages. As such, it’s not possible at this time to visit the park. 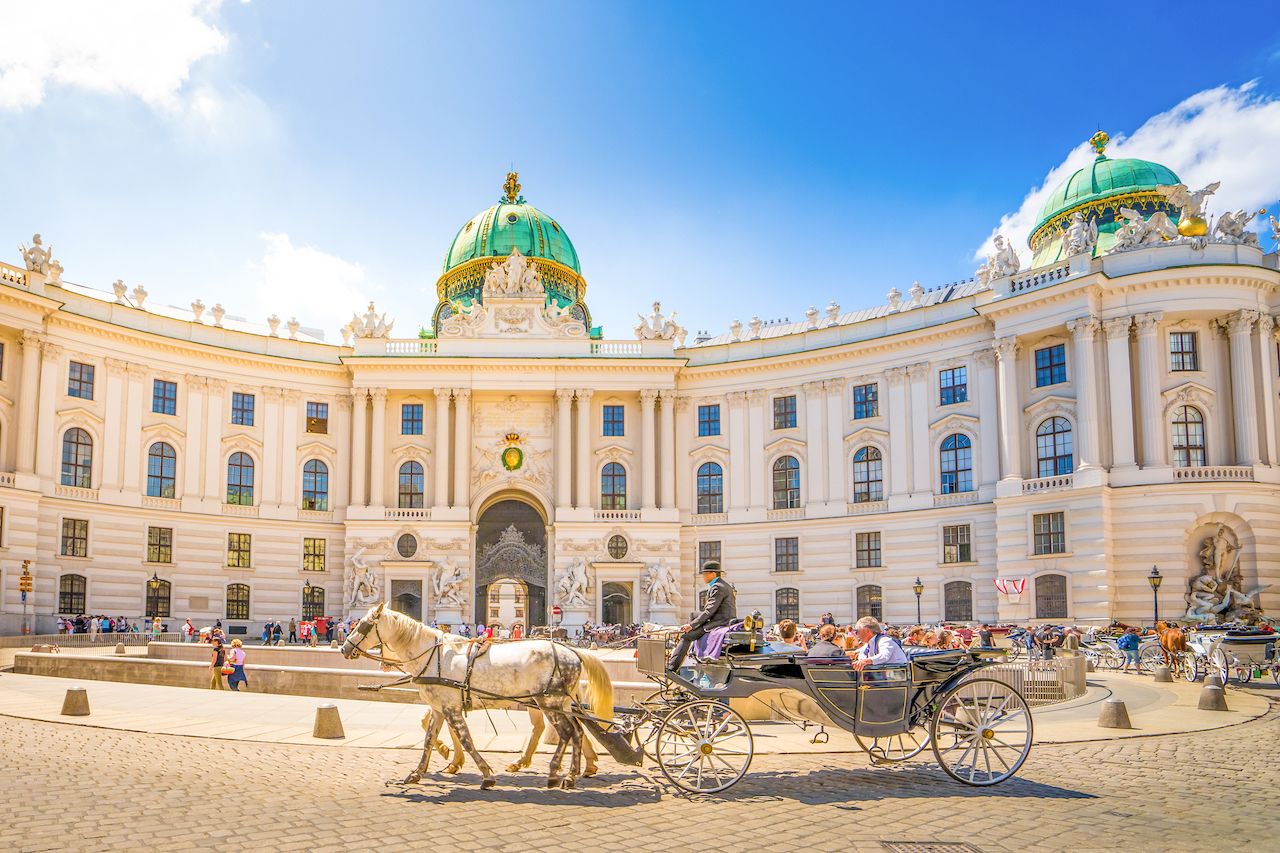 One might not think that a city like Vienna — known for its musical culture, architecture, and amazing coffee houses — would be on UNESCO’s list of endangered World Heritage sites. However, urbanization threatens its cultural heritage, including but not limited to its diverse historical architecture, which extends from the time of the Roman Empire. Urban development plans are in high gear to create a buffer to protect the city from traffic. UNESCO and many other protective bodies also seek to improve environmental conditions. The wealthy city of Vienna has every tourist amenity, from an airport to trains to a range of hotels. But tourists generally don’t know that they’re exploring a highly endangered cultural heritage. 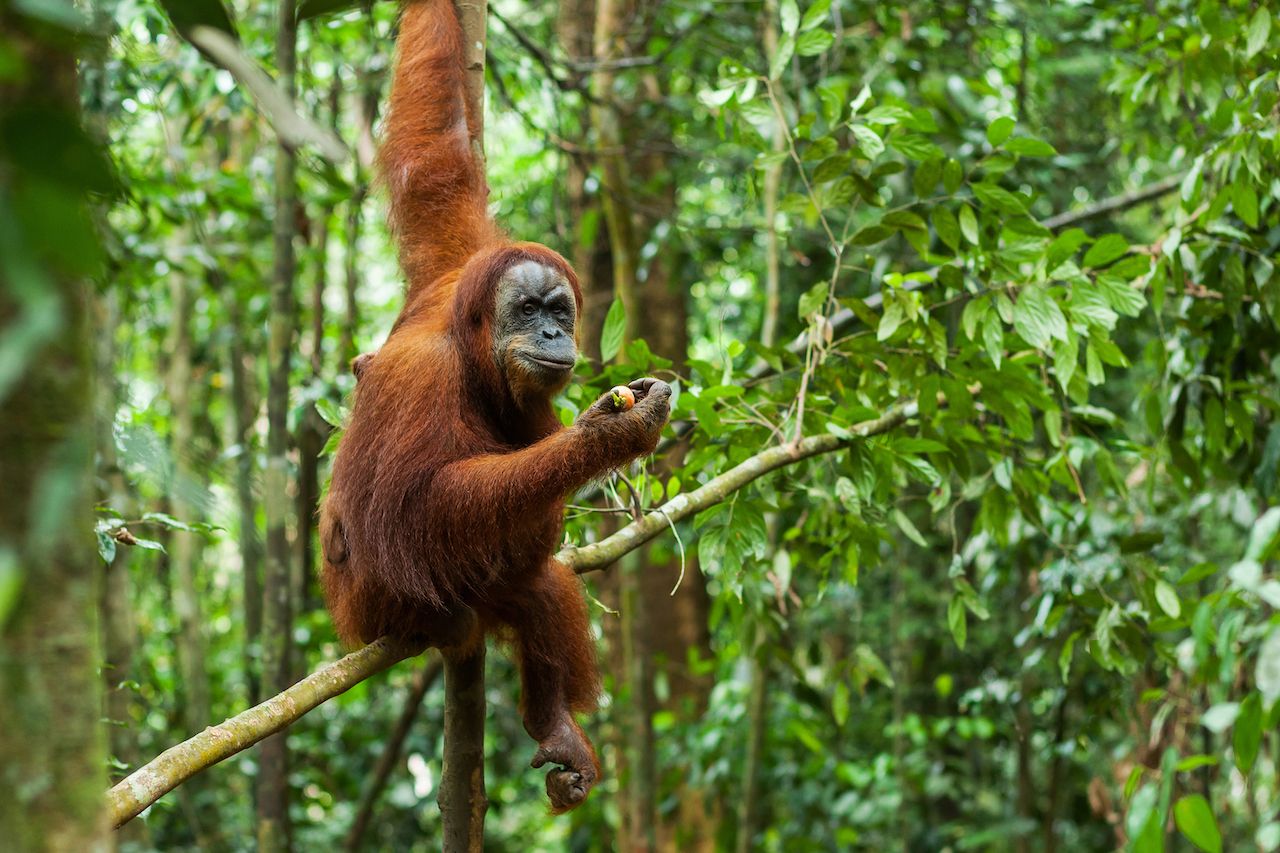 The three national parks within the almost 9,600 square miles that comprise the Tropical Rainforest of Sumatra are home to more than 10,700 species of plants and animals. Many of those critters live nowhere else in the world. The gentle, critically endangered orangutan is probably the best known endemic species. The site receives the highest protection under Indonesian law, as well as UNESCO support. However, logging, mining, and human encroachment continue to threaten the parks’ biodiversity and landscapes. The UN recommends more policing against poaching and other illegal practices, as well as invasive species management. The whole Sumatran rainforest is stunning, but the best staging ground to see orangutans is Bukit Lawang, one of the three parks. Local guides can take you trekking and conservation-minded hotels abound. 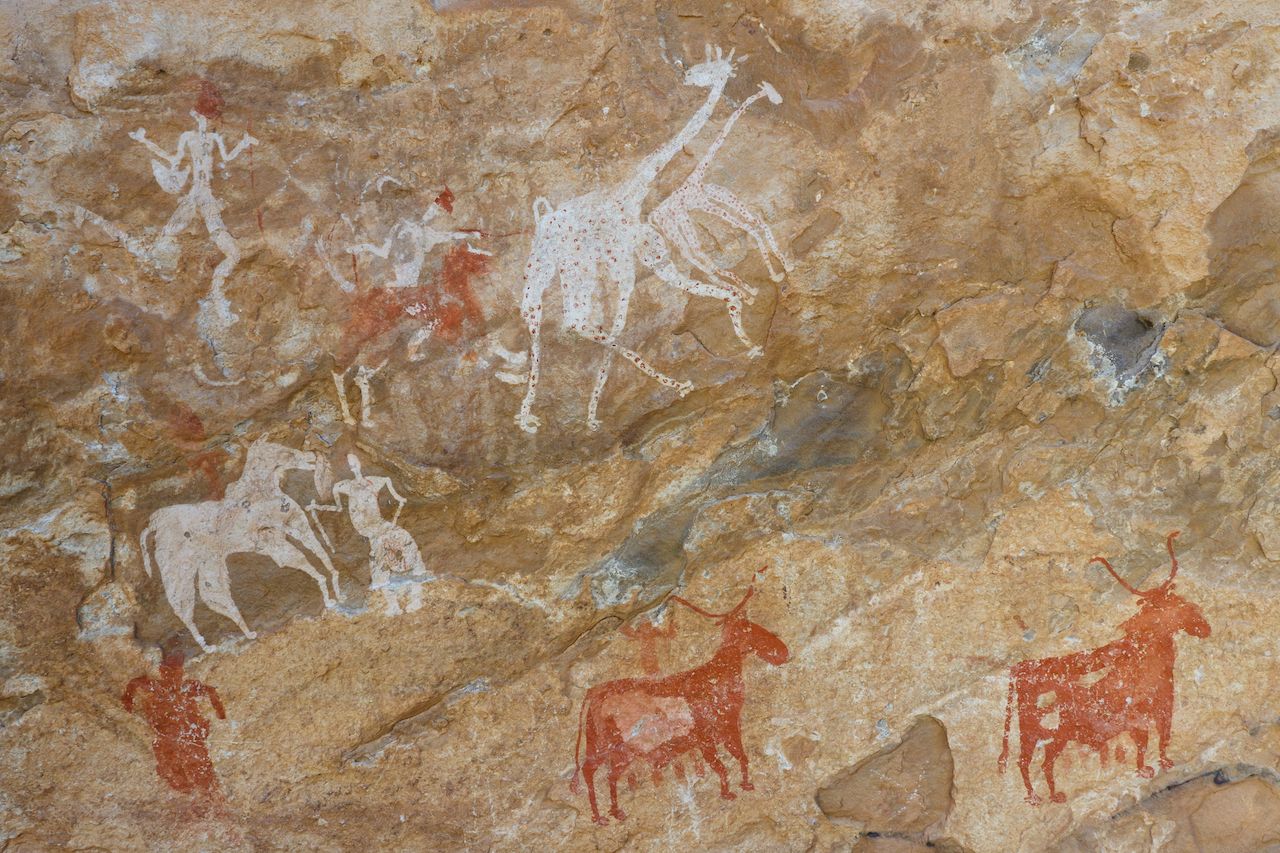 This site was a veritable prehistoric art gallery with artists making thousands of pictographs starting as far back as 14,000 years ago and continuing for 12,000 years. The designs reveal the changing lifestyles of the people of the Sahara, as well as the plants and animals with which they shared the land. Colorful designs show everything from the antics of prehistoric musicians to ostriches and giraffes. Tadrart Acacus is also the site of the earliest evidence of milk on ceramics. Looting, vandalism, and development are major threats the site faces. The nearest town is the rather remote Ghat, Libya. From there one must take a four-wheel-drive vehicle (and ideally a local guide) to the stunning Acacus Mountains, which demark part of the nation’s border with Algeria. 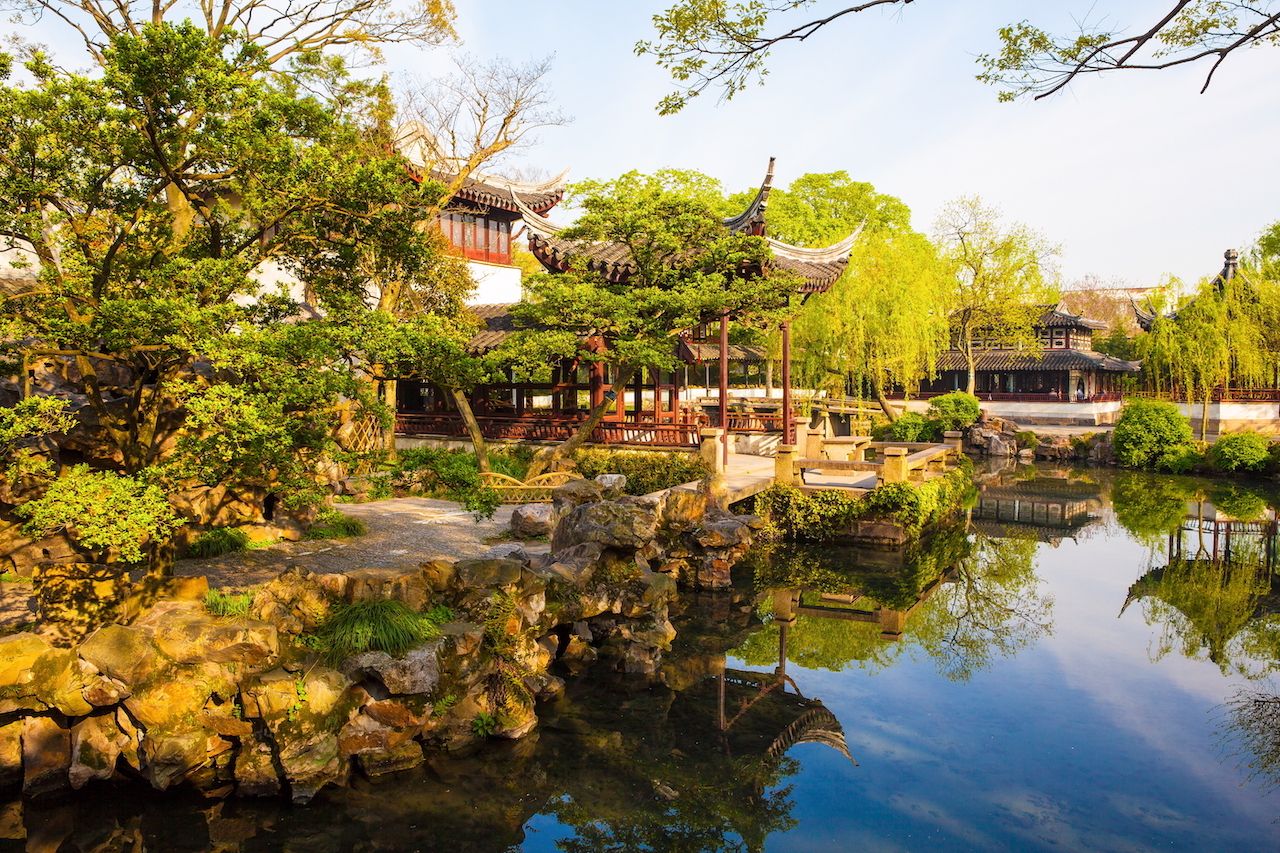 Historic Chinese gardens are known for their beautiful integration of natural elements like water, rocks, and paths to reflect dynastic cultural and intellectual values. Generations of Jiangsu Province gardeners have maintained the botanical artform for the last 8,000 years. Sixty or so of the oldest gardens still exist. Thanks to international, national, and local efforts, the gardens remain well preserved and a part of the region’s identity. Long-term preservation goals include reducing urbanization near the city of Suzhou where the protected gardens are concentrated.

Another aspiration is to improve the living conditions of the residents of the area. Sustainable tourism can encourage the local perception of cultural heritage as valuable and provide a steady economic incentive. It is not difficult to visit the amazing city of Suzhou and its many gardens. It is situated on the delta of the Yangtze River between Shanghai and Nanjing. High-speed trains go by daily, hotels are plentiful, and guided walking tours are readily available. China’s 144-hour visa-free tourism transit program applies to Jiangsu, allowing six days to explore the gardens.

10. Cultural Landscape and Archaeological Remains of the Bamiyan Valley — Afghanistan 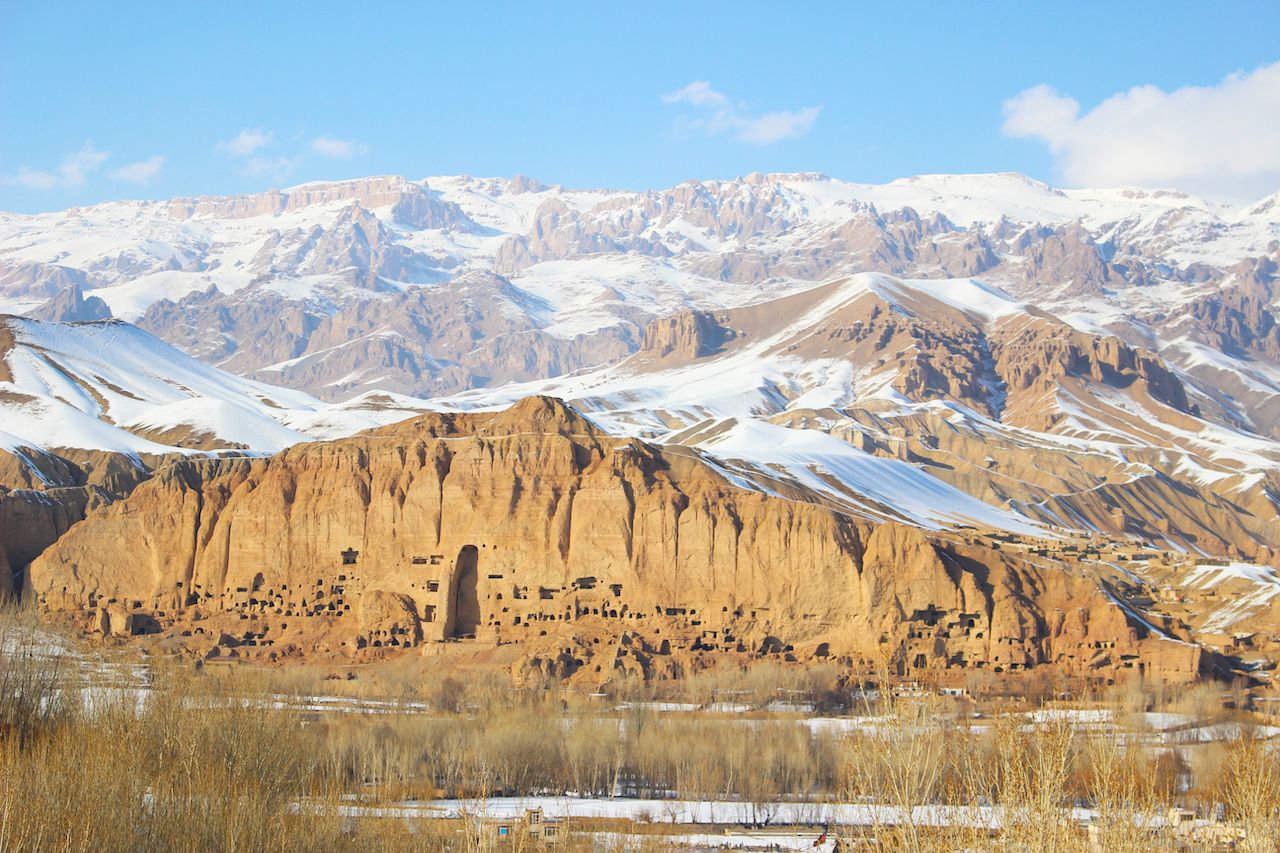 Bamiyan sadly became famous in 2001 when the Taliban destroyed the two colossal Buddha statues that graced its cliffs. The gaping holes where the statues were remind visitors of the evilness of such acts, but the Taliban didn’t win. The eight designated sites throughout the Valley still have much to offer. Monumental Buddhist sanctuaries, monasteries, and art from the first to the 13th century abound. Partially due to UNESCO protections and community-level collaborations, the Bamiyan Valley is comparatively politically stable and might soon be removed from the endangered list. Visiting the valley is tough but doable with the right visas and permits. Four-wheel-drive minivans leave Kabul, Afghanistan, early in the morning for the eight-hour, dusty voyage, passing checkpoint after checkpoint. A local guide is necessary. 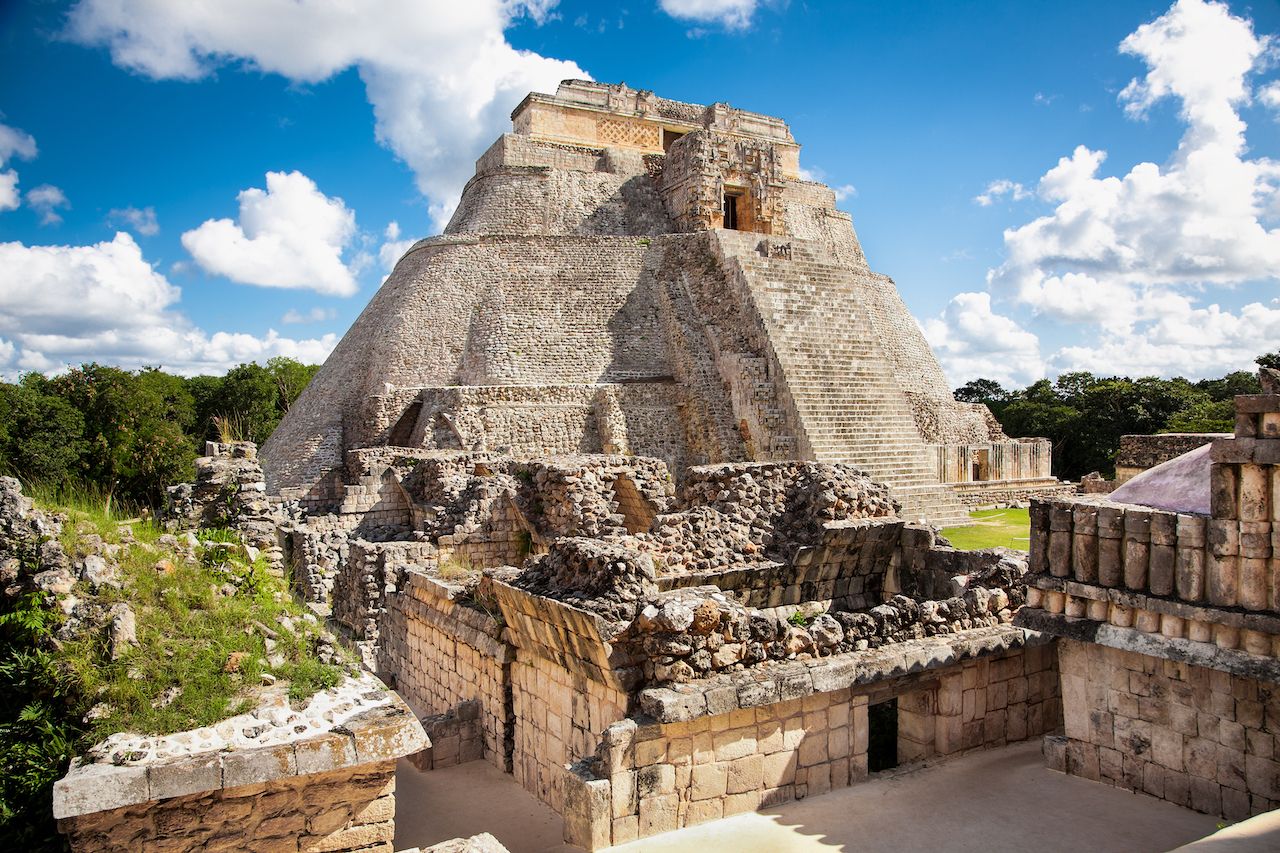 At its height, in 1400 or so, the vast city of Uxmal in Yucatan, Mexico, was home to roughly 25,000 Maya people. They built temples like the Pyramid of the Magician rising up to 12 stories tall, using three separate Mesoamerican architectural styles. The Governor’s Palace temple features the longest mosaic in the entire Maya homeland — 320 feet long. UNESCO indicates that it protects this particular Maya site because it “represents the pinnacle of late Maya art and architecture” and reveals much about the economy, iconography, and Maya understanding of astronomy.

For a long time, Uxmal was difficult to get to and protected from human encroachment and activity; now, there’s a paved toll road from Playa Carmen straight to the site. There are hotels and restaurants adjacent to Uxmal, as well as light shows and guided tours — all of which could help sustain the regional economy. There are concerns, though, that under-regulated tourism could deplete environmental resources and lead to vandalism and site degradation.

Culture13 of the Most Underrated UNESCO Sites You Need To Visit
Tagged
Archaeology Culture National Parks Insider Guides
What did you think of this story?
Meh
Good
Awesome