If there’s one meal to eat in Hong Kong, it has to be dim sum. Often mistaken to just mean dumplings, dim sum is actually a selection of small dishes commonly eaten at breakfast or lunch and is best shared among a large group of family and friends. A general rule is that two and a half dishes is the perfect number to order per person, so we say the more the merrier. Found in streetside local eateries and high-end restaurants alike, you won’t have any issues finding options.

These are the must-order dishes for the perfect dim sum experience, as well as a few of the best places to try them in Hong Kong. 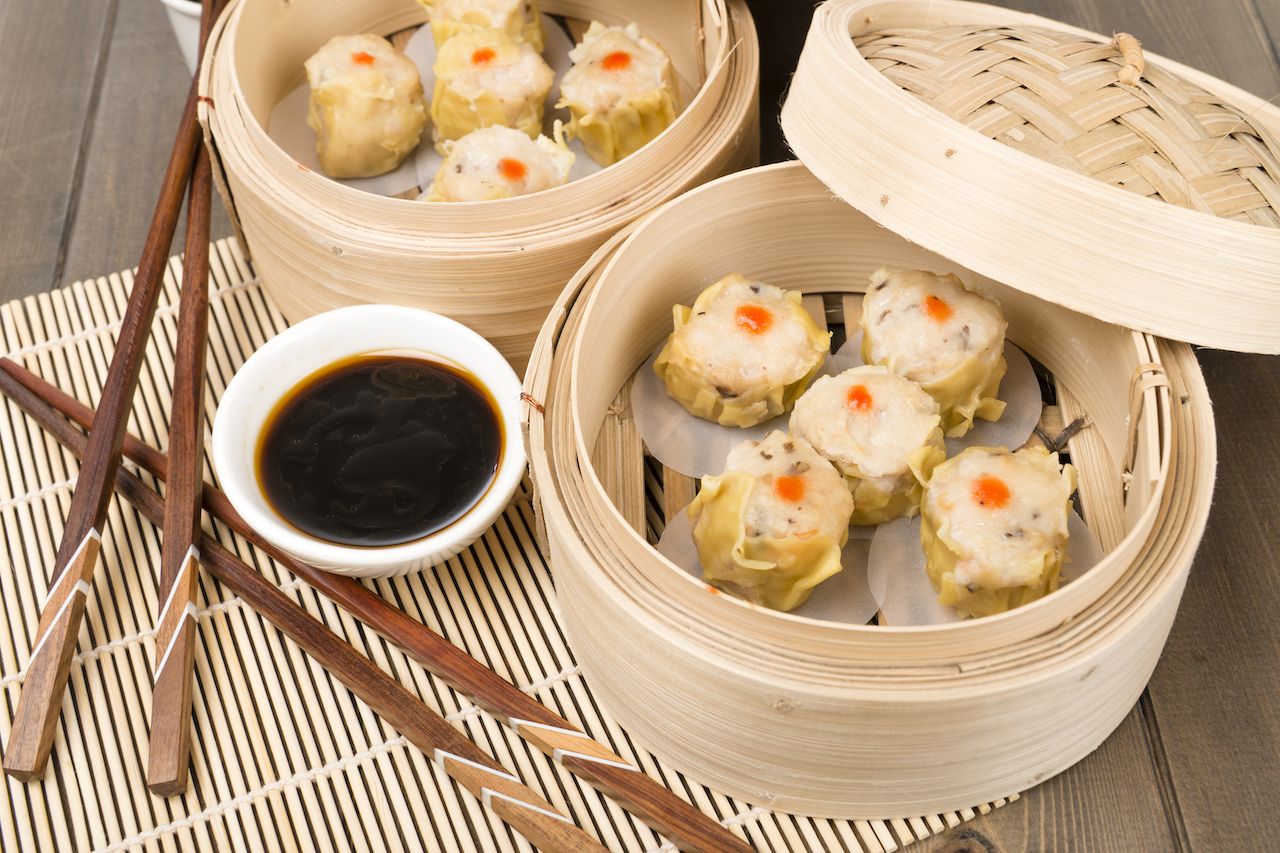 This quintessential dim sum dish has found its way into food stalls around the city, but sui mai is one style where you can tell the big jump between the street-food snack version and the quality dim-sum house version. These open-face steamed dumplings contain shrimp and pork and are garnished with bright orange crab roe. Other variations of siu mai contain mushroom instead of shrimp and chicken instead of pork. Dim Sum Library offers diners a contemporary twist on this classic with black garlic pork and shrimp siu mai. 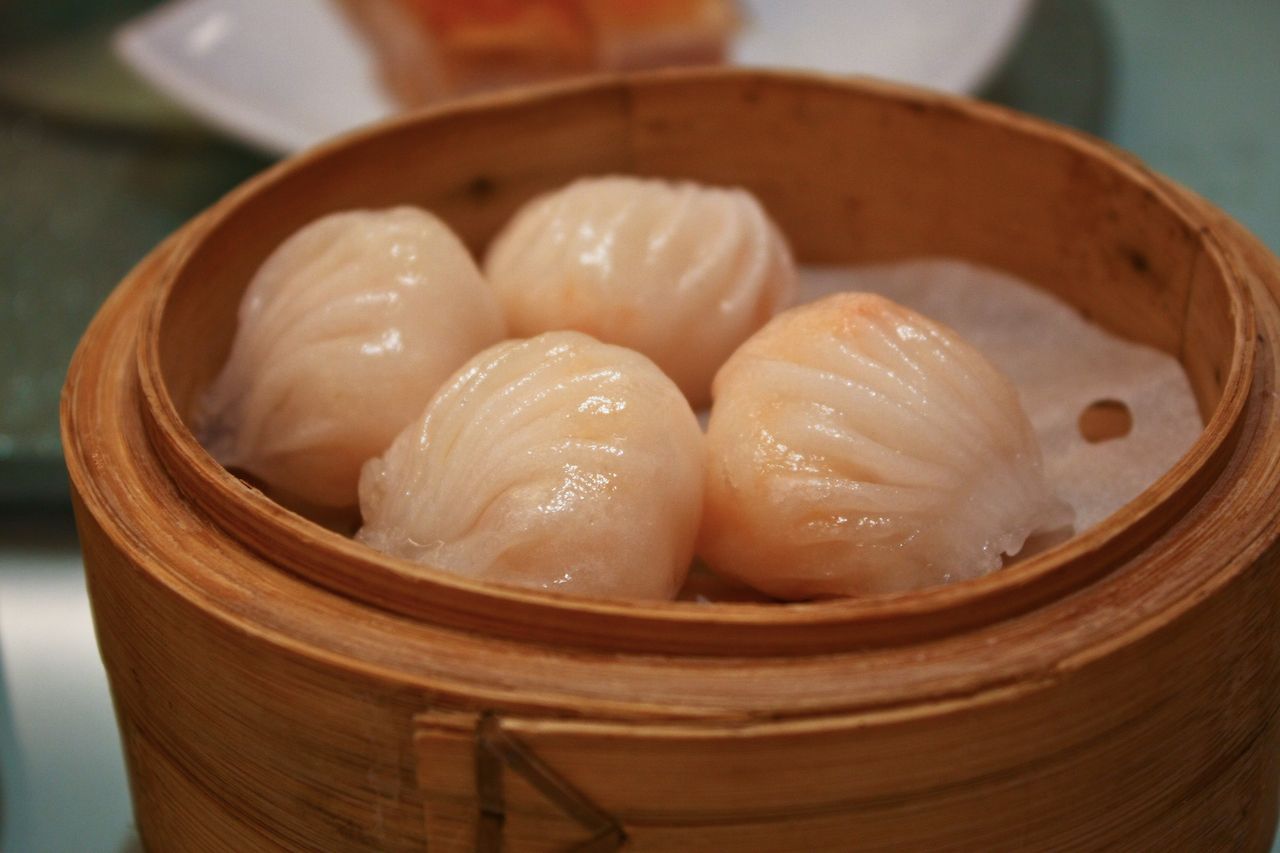 Har gow dumplings live and die by the quality of the shrimp and the translucence of the dough wrapper. These little shrimp dumplings are deceptively simple looking, but the quality of the ingredients — in particular shrimp and bamboo, which creates the creamy texture inside — and the precision required to pleat the dumplings is an art form. Luk Yu Teahouse in Central is one of Hong Kong’s oldest dim sum restaurants, which is the perfect setting to sample such a classic dish. 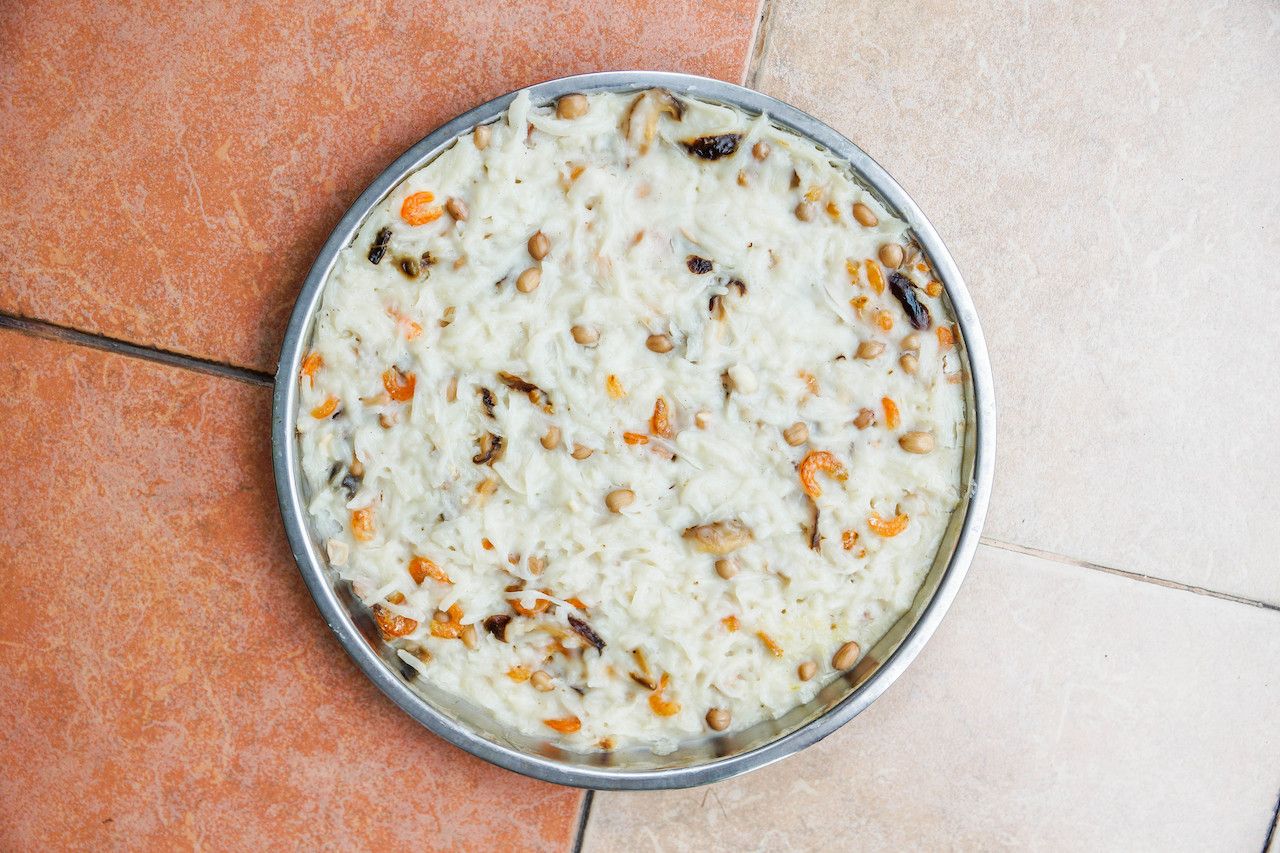 Not a cake in the Western sense, this dim sum staple is the ultimate comfort food. A traditional dish at Chinese New Year celebrations, radish cake is considered lucky, as its name sounds similar to the Chinese word for “good fortune.” It’s traditionally made with a mix of Chinese sausage or Jinhua ham, dried shrimp, shredded radish, and rice flour. The mixture is steamed and then cut into slices to be pan-fried, which gives it a crispy exterior with soft and spongy insides. It’s usually served with chili XO sauce for dipping to give it some extra bite. One Dim Sum is regularly touted as one of Hong Kong’s top dim sum restaurants, and it certainly doesn’t disappoint when it comes to turnip cake. 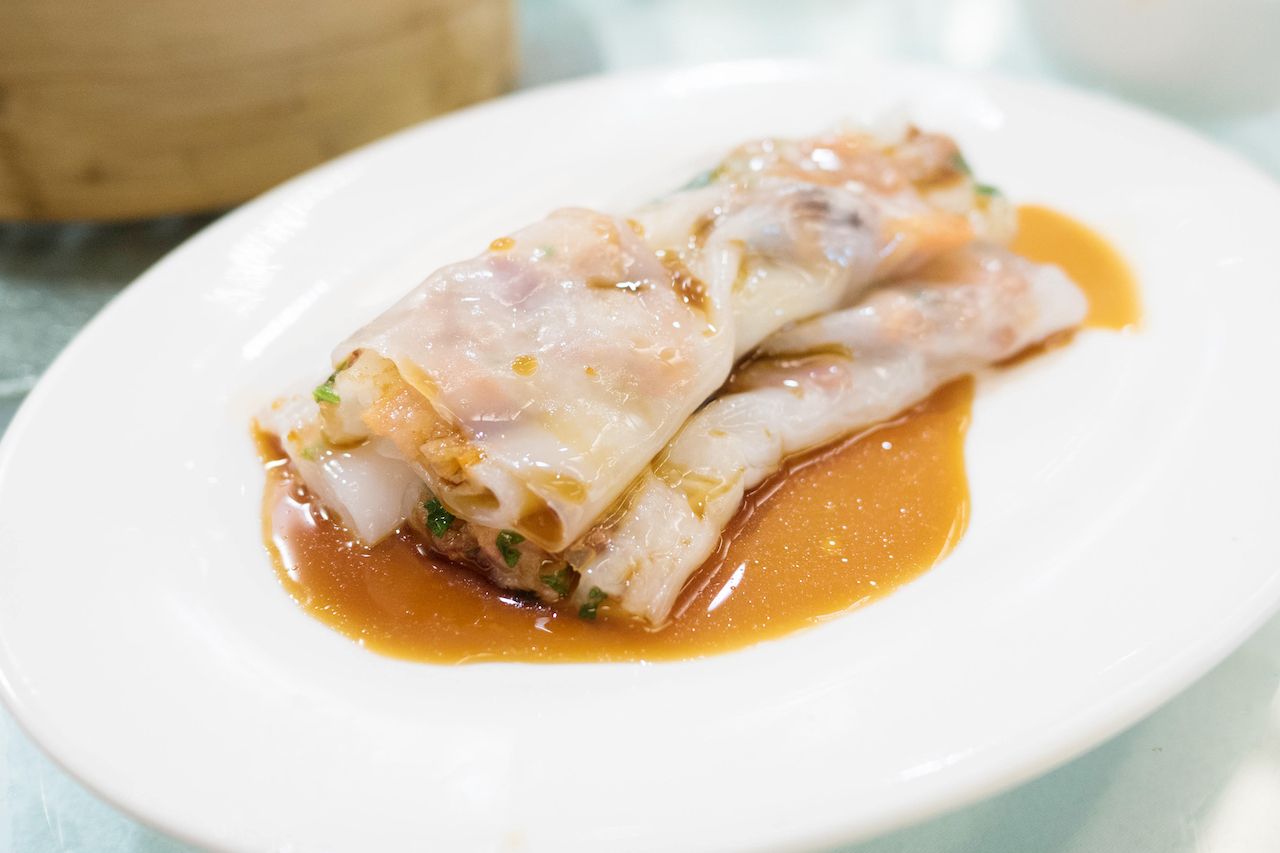 These aren’t spring rolls if that’s what you’re thinking. Using glutinous rice flour, these soft thin sheets are rolled around a filling (usually shrimp, pork, or tripe) and served with soy sauce. One of the best variants of this involves a crispy inner casing around the shrimp, which gives an extra crunch to the usually soft texture. Try them at Dim Dim Sum. 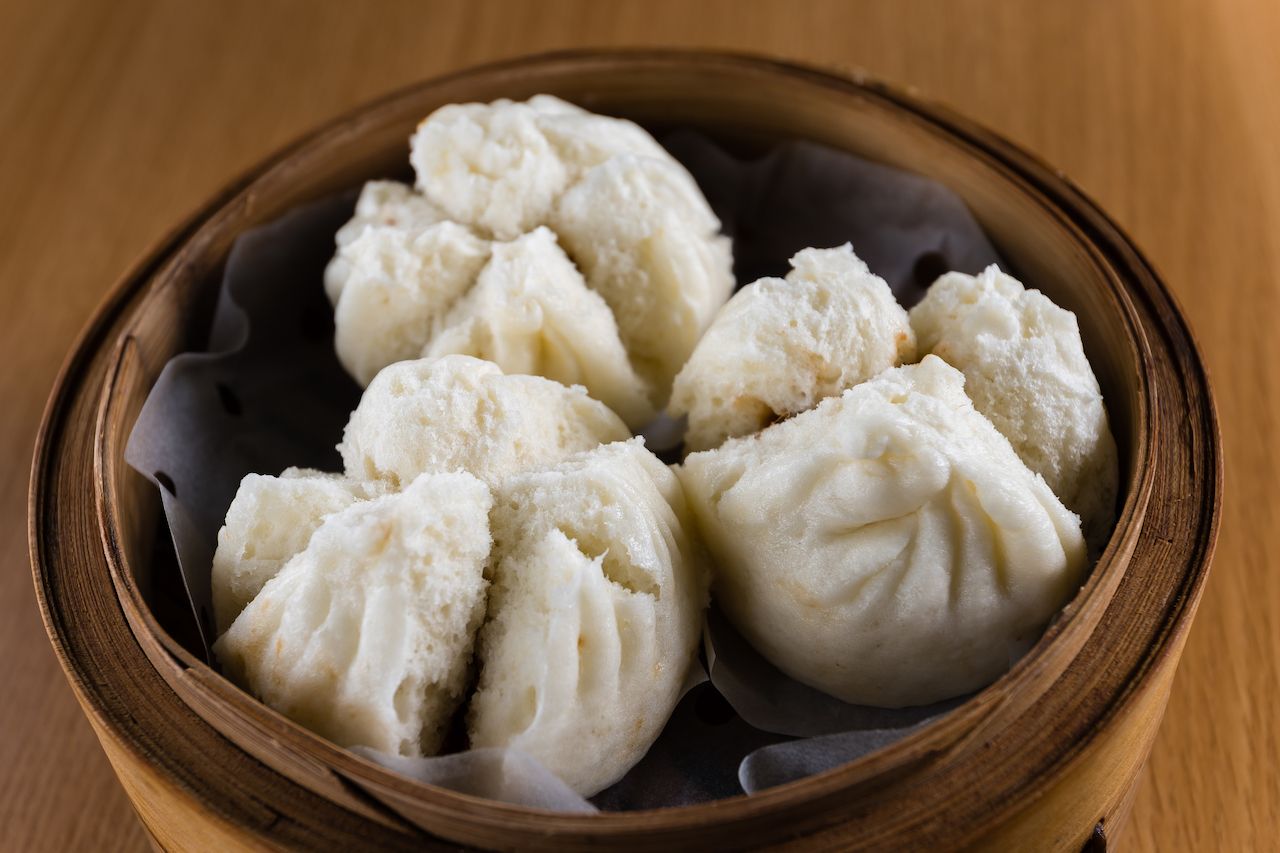 Even if you’ve never heard of dim sum, there’s a good chance you know of char siu bao, one of Hong Kong’s most famous culinary exports. Char siu is barbecued pork, and the sweet filling perfectly complements the plain, steamed soft white bao encasing it. Hong Kong’s most famous char siu bao can be found at the Michelin-starred Tim Ho Wan, which produces an alternative baked version to this standard street snack, and the bao’s exterior is crispy with a melt-in-the-mouth sweet sugar crust. 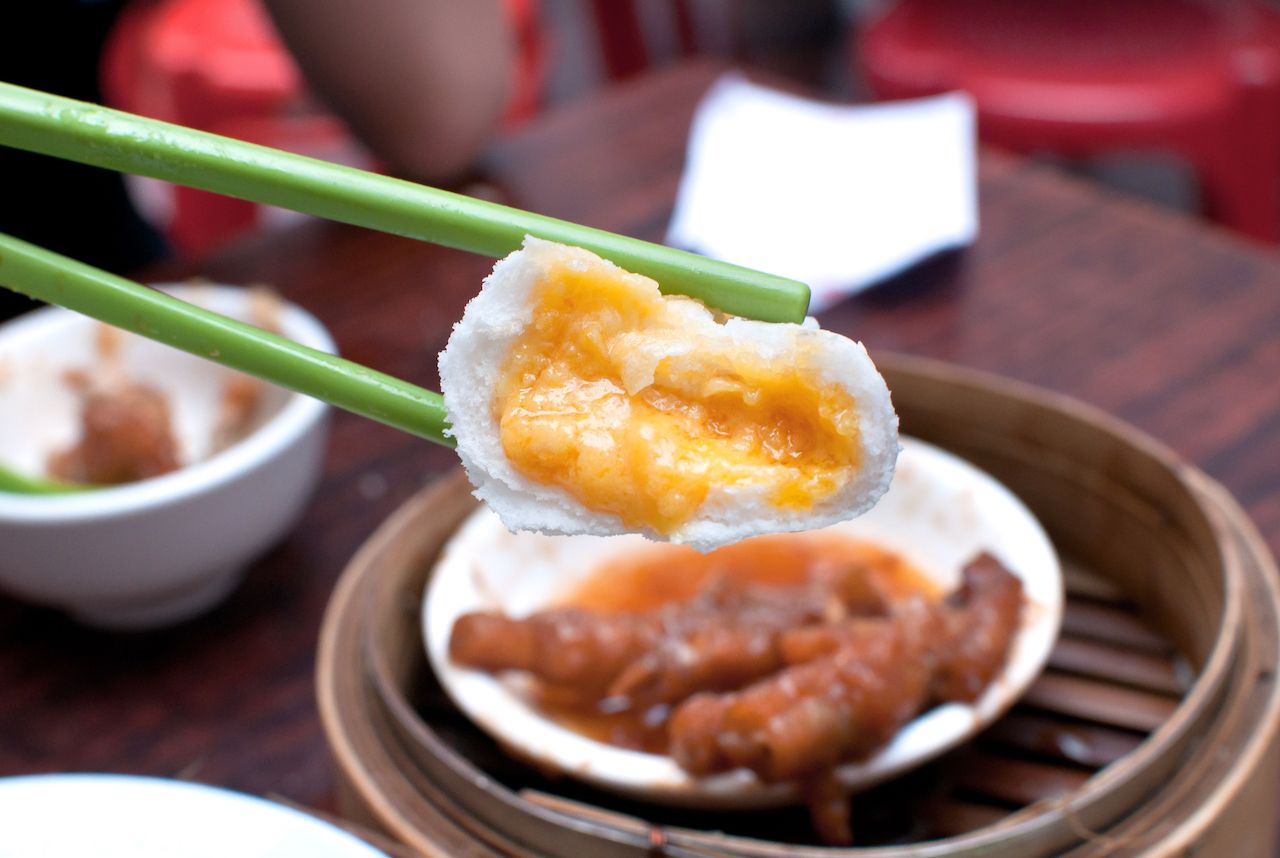 Drop any notions of lumpy English custard you have because things are a little different in Hong Kong. The orange molten inside of these fluffy white buns is a rich and sweet egg custard, different from its western counterpart as it often uses condensed milk. The novelty molten custard buns at Yum Cha offer a fun, interactive dining experience, but you can find these buns at any dim sum restaurant. 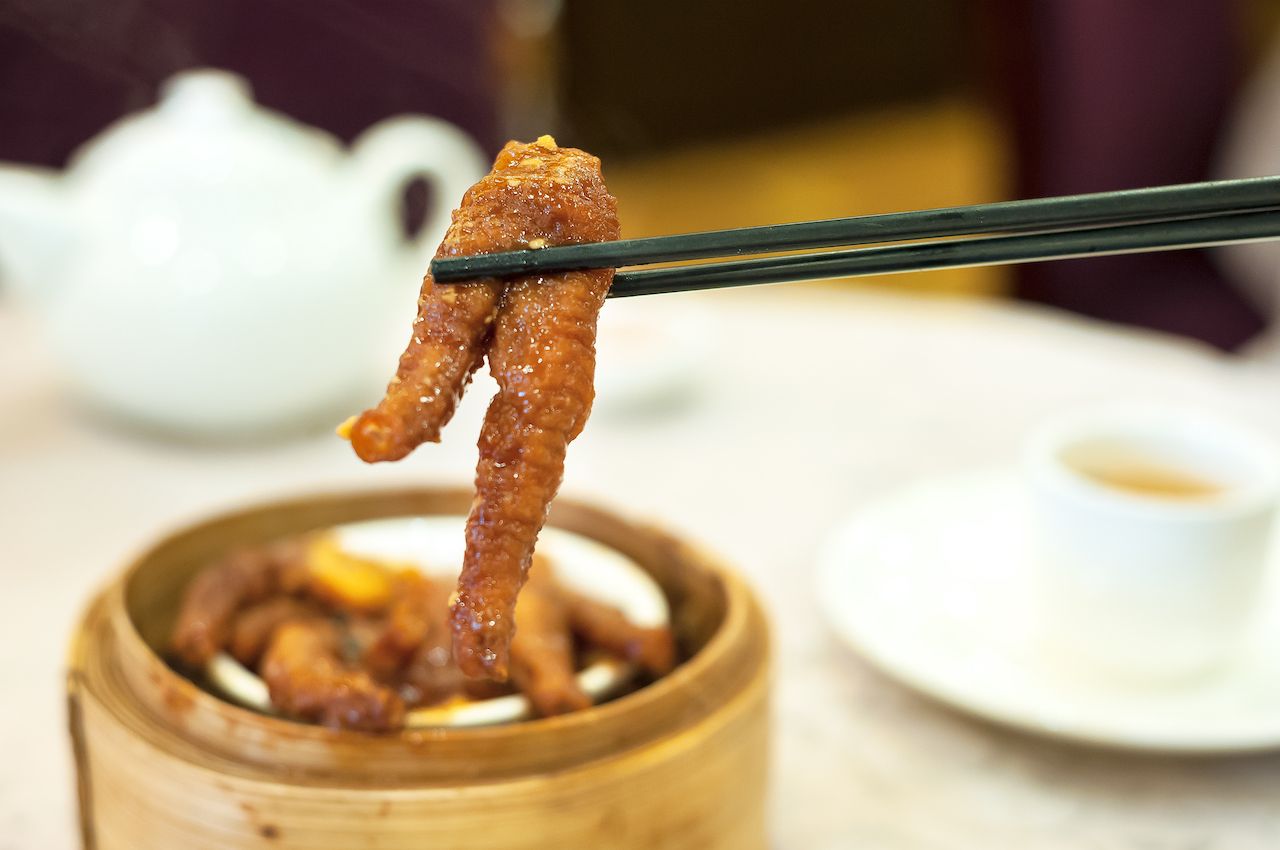 While not the most appetizing dish to many Westerners, chicken feet is a dim sum classic that, if you’ve never tried before, should be on your list. It’s traditionally braised with black bean sauce, and the meat is predominantly fatty and skin-like. When cooked well it’s tender, tasty, and can be sucked right off the bone. Often they go by the name phoenix talons, including in Ding Dim 1968 where you can sample this unique Hong Kong dish. 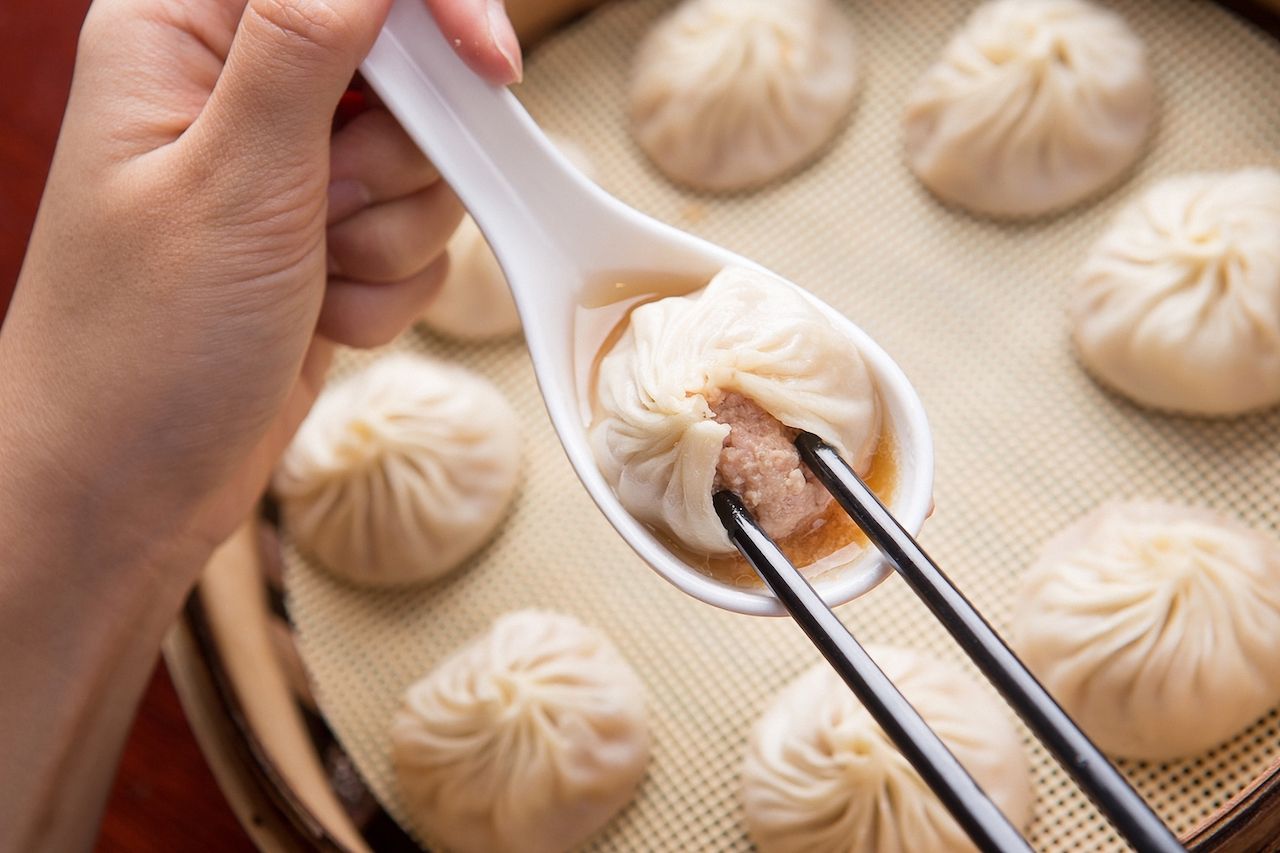 This Shanghainese dumpling isn’t a traditional dim sum dish, but you’ll frequently find it on the menu. These steamed dumplings are filled with soup and usually pork, and they’re eaten with ginger and vinegar. Be careful when you take your first bite as the soup inside is usually piping hot — it’s not unusual to see diners poke a small hole in the top to let it cool down first. Din tai fung has reached international fame with its pork xiaolongbao, and these juicy dumplings are certainly worth the hype (and Michelin star).