Craft distillers may well prove to be the Henry Fords of the COVID-era.

Much like Ford famously repurposed his auto plants to make thousands of airplanes needed during World War II, craft distilleries are repurposing their stills to help fight the spread of the coronavirus.

When people bought the country out of hand sanitizer — an alcohol-based product — last week, distilleries from Oregon to Alabama to Canada realized this was an opportunity to use their facilities for the greater good. That is, if you didn’t already consider gin production “the greater good.”

“It sounded like the general public were having a hard time finding hand sanitizer, so were first responders and essential services,” says Peter Hunt, the president and master distiller at Victoria Distillers in British Columbia. “It wasn’t something I’d thought about prior to last week, but with store shelves becoming empty of sanitizers I thought maybe there was something we could do.”

Distillers weren’t alone in thinking they might be able to use their facilities to make sanitizer. The Food and Drug Administration released guidelines on Monday for distilleries to make the stuff, prompting many of them into action.

“I did the hardest thing I’ve done in 32 years on this planet and put 96 people out of work,” says Jason Barrett, president and master distiller of Black Button Distilling in Rochester, New York. “I felt obligated to get them back to work as soon as possible, and by Monday morning, I found the FDA guidance to the industry on how to make sanitizer. So I immediately started sourcing and talking to staff about our equipment’s compatibility.”

In just a few days, Barrett and his team had figured out how to take a supply of vodka they’d made around Christmas time for summer release and turn it into hand sanitizer. While it took 15 months for Black Button to develop its initial supply chain, Barrett was able to develop this one in just four days. He will release his first bottles to hospitals and nursing homes this week.

Turning grain spirits into hand sanitizer isn’t as simple as taking that bottle of charcoal-filtered vodka on the bottom of your bar and adding some glycerin. It’s actually a fairly complicated chemical process that you need the appropriate equipment to do, and craft distillers are especially up to the task. 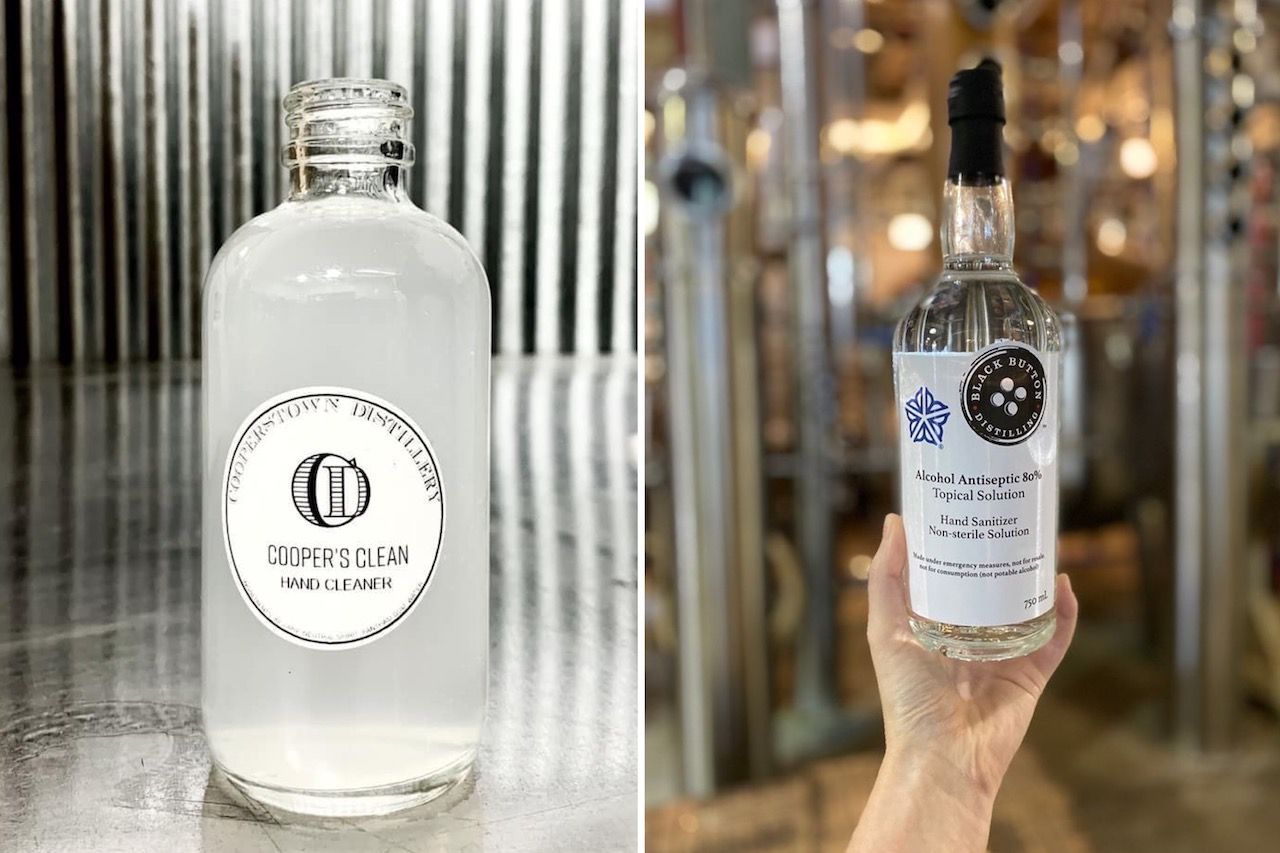 For those who weren’t listening during their last distillery tour, alcohol distillation is the process of separating alcohol from water by heating it, collecting the evaporation, and cooling it to condense it back into a liquid.

Different types of alcohol evaporate at different temperatures. The first alcohols to come off — methanols — generally taste like nail polish remover and are discarded by distillers. These are known as “heads.” The stuff that evaporates in the middle — ethanol — is known as the “hearts,” and is what you find in commercial spirits. The last stuff to boil — fusel alcohols — are also not particularly tasty, and are known as “tails.” You’ll find occasional whiskeys that use these to add complex flavors, but generally, the tails are discarded too.

Even though heads and tails are typically tossed as waste, some distilleries have found them useful in the production of hand sanitizer.

“In production of our gin we have a relatively high amount of alcohol waste we just dispose of, because we’re so selective about what we use,” Hunt says. “I figured with all this alcohol going around we could fill a gap, fill a need.”

He says Victoria Distillers was usually discarding about 50 liters of alcohol a day, all at about 90-percent alcohol — well over the 60 percent guideline for hand sanitizer. So they mixed it with distilled water and vegetable glycerin, to make sure the alcohol doesn’t evaporate before it has a chance to sanitize. Add in some orange botanicals, and you have one of the nicer-smelling hand sanitizers on the market. 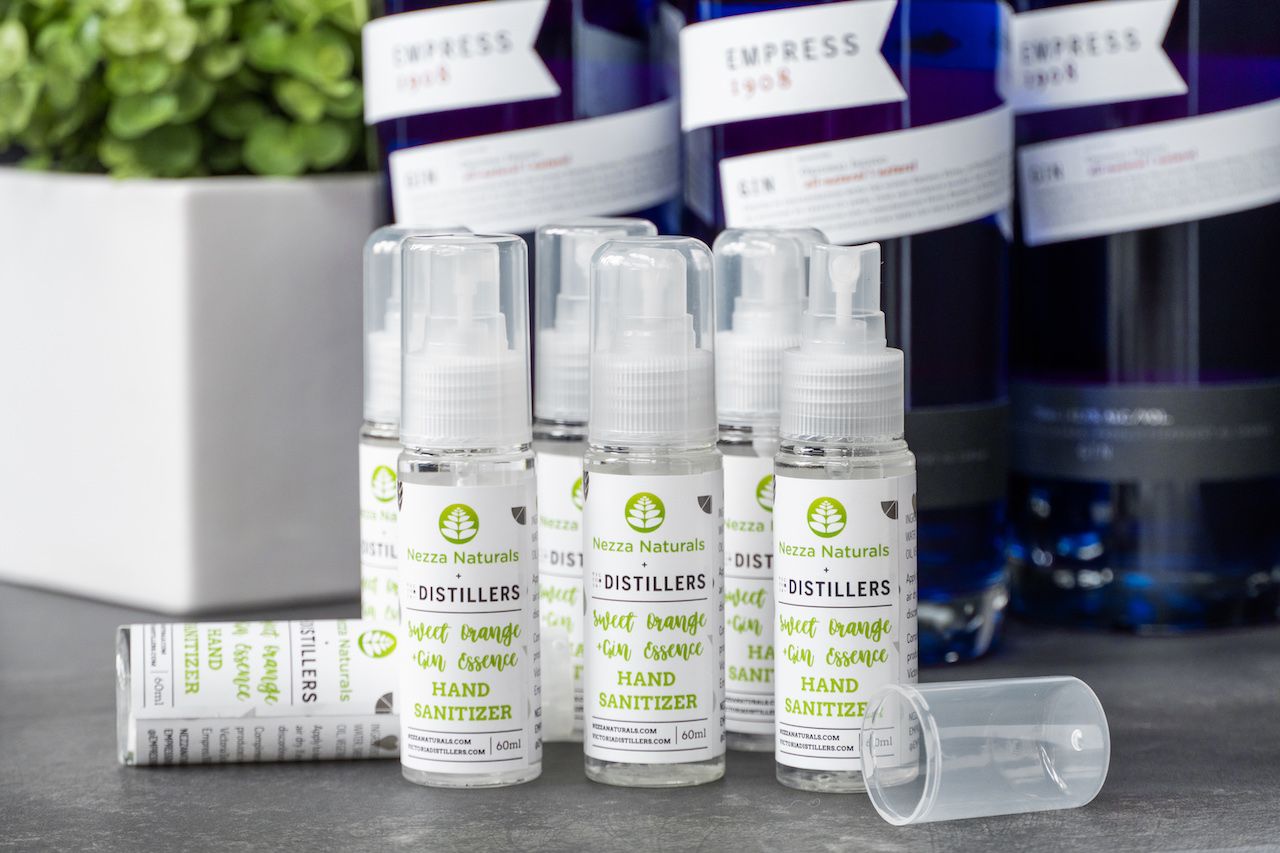 Other distilleries shy away from using heads and tails, like Black Button. At Cooperstown Distillery, owner Eugene Mara used an experimental batch of corn vodka to create his distillery’s sanitizer.

“We really didn’t have enough heads to make enough (sanitizer),” Mara says. “So we’re using some of that and our neutral spirits that we make vodka from. We did some experiments with corn vodka a while ago and we had about 30 gallons we were wondering what to do with. So this is the perfect opportunity to utilize it.”

The small distillers’ spirit of experimentation is why craft distilleries, even more than the big brands, are so well-equipped to answer the call for hand sanitizer. Though LVMH recently announced it would be making hand sanitizer, small distilleries are used to creating things they never have before, and can adapt faster than larger operations.

These three are far from the only local distilleries making hand sanitizer. Mara said he got the idea after reading a story about Shine Distillery and Grill in Portland, Oregon, making sanitizer. John Emerald Distillery in Alabama began production this week. Dozens of other distilleries in New York state and nationwide have gotten in on it too.

Thus far, the largest problem distillers have found is sourcing the bottles. Black Button is distributing its sanitizer in 750-milliliter liquor bottles to hospitals, nursing homes, and first responders until it can source enough plastic bottles. Victoria partnered with a local natural products maker, which had extra bottles after it moved away from using plastic containers.

Currently, most distilleries are focusing their distribution on those who need it most: medical facilities, first responders, nursing homes, and others on the front lines of the fight against COVID-19, as well as the immunocompromised (i.e., not hand-sanitizer hoarders). Though Mara said Cooperstown would be handing out sanitizer to the general public, it has received calls about it from as far away as Connecticut and Vermont.

“We never realized the desperation in people’s lives right now,” Mara says. “But the reception makes it all worthwhile.”

Distillers have no timeline on how long they’ll be in the sanitizer business, just as nobody has any clear timeline how long our lives will be drastically changed. But for now, these small businesses are doing a huge part to make life a little easier for all of us. They may not be making airplanes, but they are making a difference.

NewsFrench Luxury Brand LVMH Is Using Its Factories To Make Hand Sanitizer
Tagged
COVID-19 Wellness
What did you think of this story?
Meh
Good
Awesome