Sharknado, sadly, is only the stuff of Ian Ziering, straight-to-TV fiction.

Swimming through a wall of sharks seems equally as far-fetched but is actually possible once a year in Fakarava atoll in French Polynesia. The 35-mile rectangular stretch of coral in the South Pacific is home to a small, 100-yard-wide channel called the South Pass, which for the weeks surrounding the summer solstice is filled with a venerable wall of sharks.

Okay, so it’s not an actual barrier fence made out of sharks. Though that would be cool. It’s a massively high concentration of gray reef and other sharks, who come to the South Pass to feast on spawning groupers. And if you’re cool with swimming through hungry sharks and fish reproductive fluids, it’s one of the coolest dives in the world.

Here’s how it works: Camouflage groupers flock to the South Pass each year for spawning. They do this because the torrential currents that flow through it each day efficiently carry fertilized eggs out to sea. Male groupers spend about four weeks here, fighting off other males for the right to be the first to fertilize a female’s eggs. Not the only one, mind you, just first. Seems like a lot of work to be Baby Daddy #1. 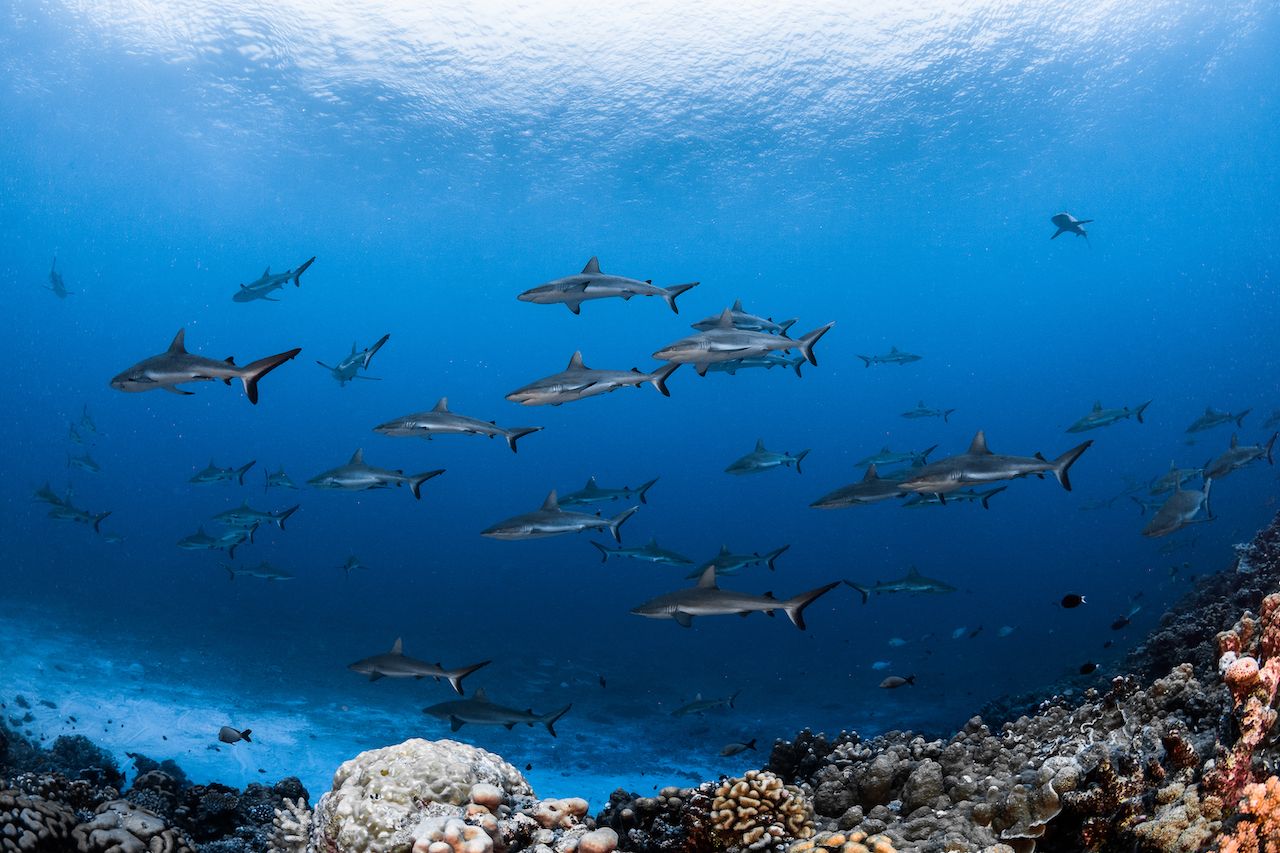 About 17,000 groupers spend the month in the 115-foot-deep channel. While they wait for their chance to spawn, they also try and avoid the 700 or so sharks who also come to the South Pass looking to make them late-night snacks.

Fortunately for the groupers, they’re mostly too fast for the sharks to catch. The sharks know this, so instead of wasting energy trying to hunt in daylight, they just swim around the pass and enjoy the warm water. If you want to dive with sharks in a calm environment, daytime is the time to go.

However, if you’re the kind of person who replays lion takedowns on Planet Earth, you’ll want to dive the South Pass at night. Because the sharks can’t catch the groupers during the day, they wait until nighttime to pounce, when packs of hungry predators can rouse sleeping groupers, surround them, and tear them to shreds.

Some of the groupers survive the attacks too, swimming through the channel with missing fins and mangled eyes, still hoping to get a shot when the females release their eggs. It seems as close to a Civil War hospital as any of us will get. 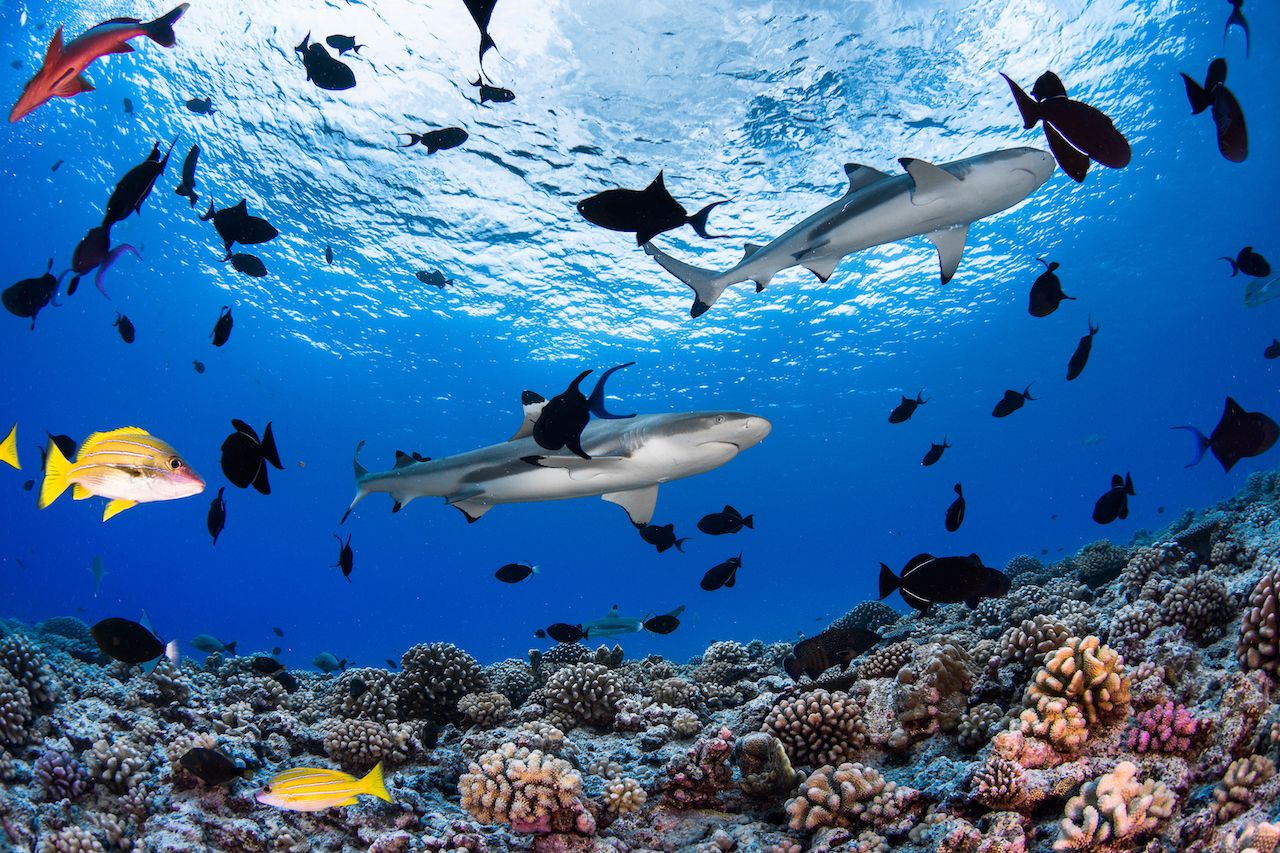 Finally, just around sunrise on the night of the full moon, females release their eggs into the water, and males furiously follow them shooting sperm they hope will fertilize the egg. If nothing else, it makes you thankful humans don’t breed this way.

Aside from the inherent grossness of navigating a sea of fish sperm, diving the wall of sharks is pretty safe. Or so says famed underwater photographer Laurent Ballesta who in 2014 spent an inhuman 24 consecutive hours at the bottom of the channel observing these sharks for National Geographic. In his account of the dive, he said humans are “obstacles, not targets,” and in a total of 21 weeks researching the phenomenon, the worst any of his team got was an errant cut from a surgeonfish. 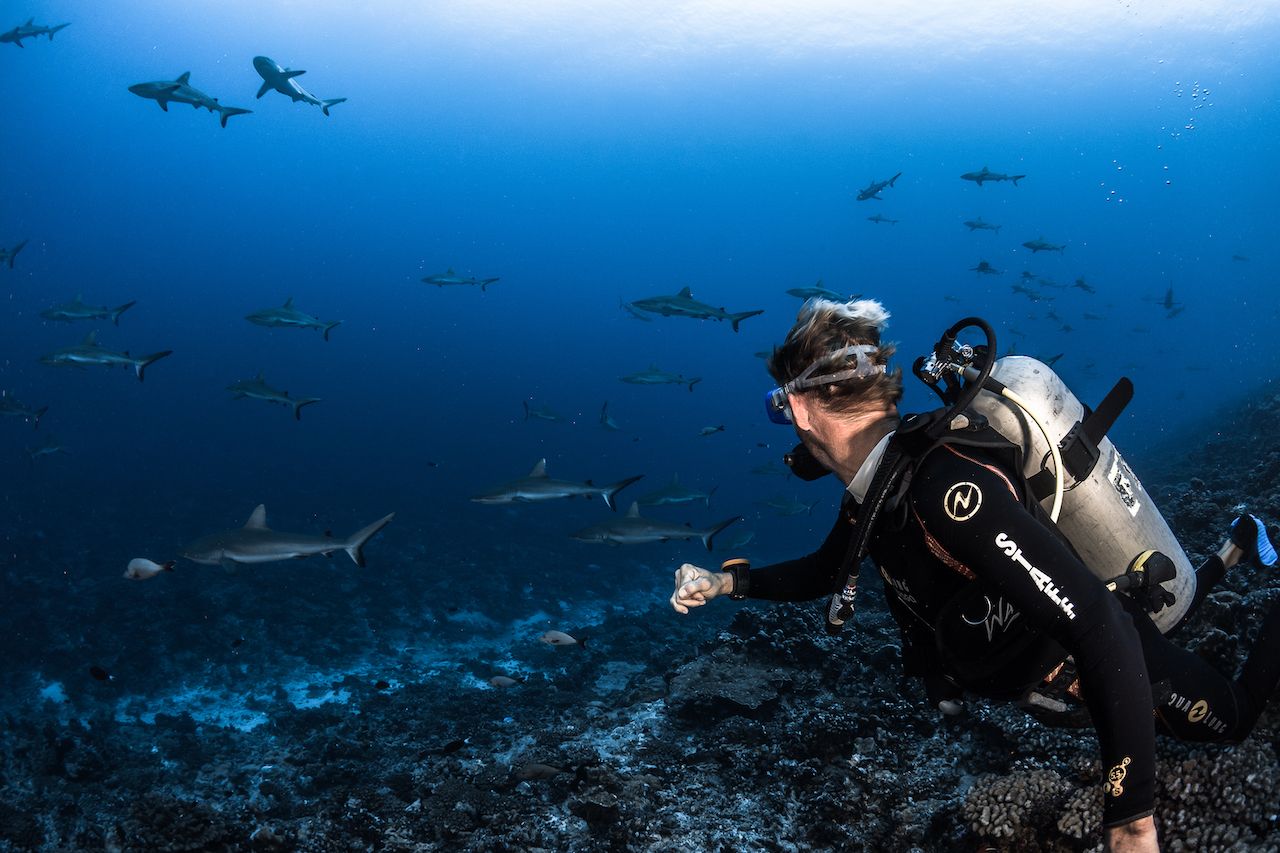 If swimming through 700 sharks by day and watching them pulverize thousands of groupers at night sounds like your idea of a dream vacation, you’ve got a year to plan. Companies who run these dives, like Top Dive, can help you with the logistics of getting there, then guide you as safely as they can through the wall of sharks. As with anything in life, there are no guarantees. But your odds of surviving are still a lot better than if you ever got stuck in a real sharknado.