Winter is one of those things best viewed from afar. Like, as long as you can just sit back with a hot cocoa and enjoy soft falling snow, it’s pretty darned charming. But once you have to go outside and shovel your car out from under a few feet of snow in a driving ice storm, it loses a little of that romantic luster.
So what better way to experience winter than a soothing train ride through alpine wonderlands? Where you can step into a heated dome car, take in all that snowy beauty, and never step out of flip flops. Across North America — and the world — you can find some absolutely dreamy winter train trips. Here are ten we particularly enjoy. 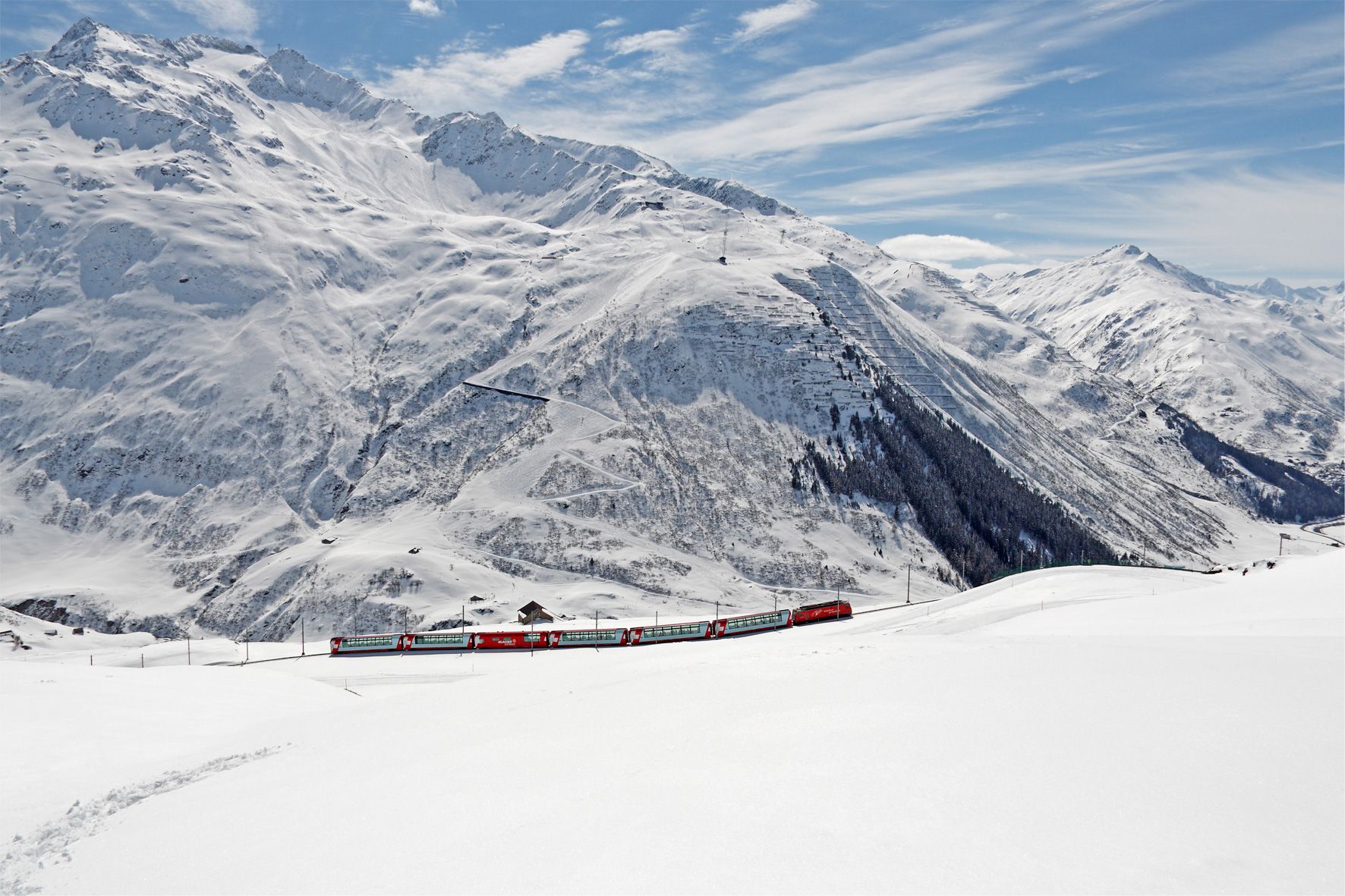 You’d be hard pressed to find any train trip through Switzerland that wasn’t jaw-droppingly scenic, but the king of them all is this eight-hour ride between the country’s two biggest resort cities. Each turn on this trip brings you a new, envy-inducing view, and when you’re not steaming across a pristine mountain lake you’re passing over a Swiss village that looks like it stepped off the cover of a chocolate box.

You’ll pass through the majestic Swiss Alps, gazing out your panoramic dome car at sites like the Rhine Gorge — aka the Grand Canyon of Switzerland — and the Solis and Landwasser viaducts. And for the ultimate indulgence, try Glacier Express’ Excellence Glass, which pairs your views with a multi-course meal, massive leather seats, and an open bar.

If you’re planning to visit Philadelphia, Baltimore, New York, or Washington, DC, this winter consider taking the scenic route on the Vermonter. Once out of the region’s major metropolitan areas, it winds along the Connecticut River into the Green Mountains, stopping in cities and towns filled with snow-covered colonial churches and faded red farmhouses.

You’ll also have the opportunity to drop in at Stowe, Killington, or any of the state’s other fabled ski resorts, and put yourself smack in the middle of all that beautiful white wilderness. Or visit Brattleboro and Montpellier, two of Vermont’s largest cities and surprisingly-enjoyable places to spend a weekend. 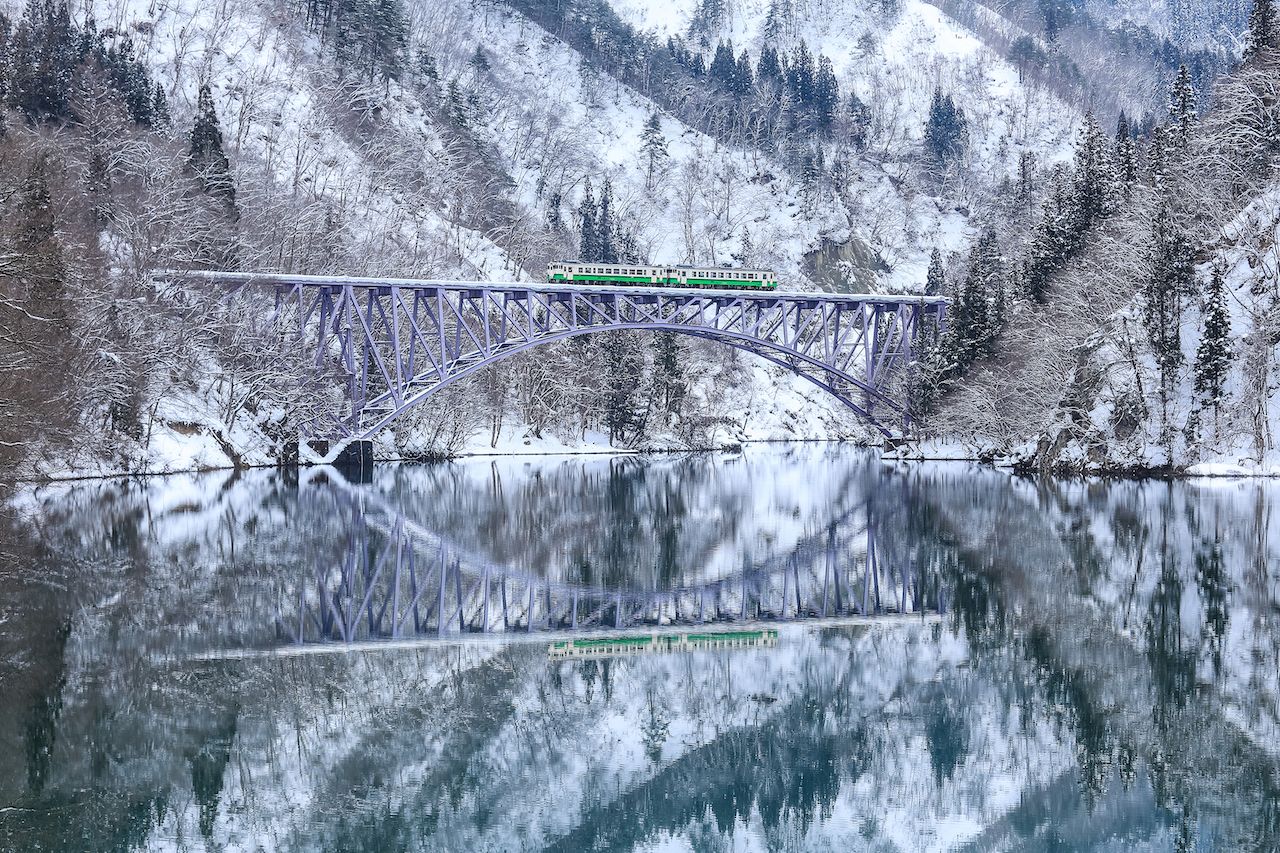 The 83-mile trip from Fukushima to Niigata is a little like taking a train through a Japanese snow globe, as the powerful engine chugs through remote Japanese villages whose red tin roofs are blanketed with white stuff. Along the way, you’ll also cross high, arching bridges over deep forest valleys, adding a dose of Asian engineering to the experience.

Though about 21 miles of the route has been closed due to landslide damage since 2011 — and won’t reopen until 2021 — that hasn’t stopped this ride from becoming a sensation on Chinese social media. Nor has it diminished the train’s reputation as one of the most romantic rides in the world. 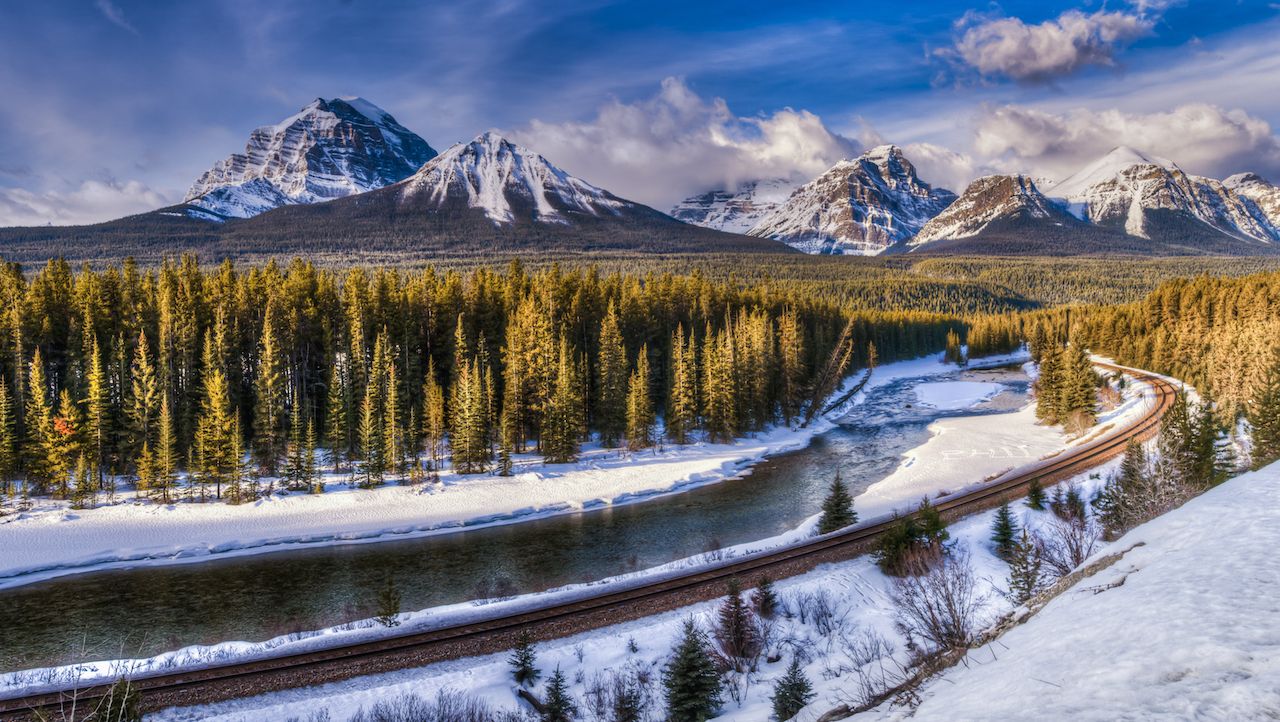 North America may have no more scenic train route than the one running through the Canadian Rockies. The luxe Rocky Mountaineer offers a few routes along this path, each with spectacular highlight you won’t find south of the border. The classic First Passage to the West trip runs two days, starting in Vancouver, stopping in Kamloops and covering thick evergreen forest and lakes, before continuing on to the towering, snow-capped mountains of Lake Louise.

For a higher trip, try the Journey Through the Clouds, which follows the same first leg into Kamloops, then carries on through the highest peaks in the Rockies. If you want to spend a little more time exploring western Canada, opt for the Rainforest to Gold Rush route, which traverses the coastal rainforest up to Whistler before traveling past Fraser Canyon and Mount Robson, and on into Jasper. And if you’ve really got some time, try Original Travel’s Canadian Rockies Rail Journey & Alaska itinerary, which extends for another week into the Last Frontier. 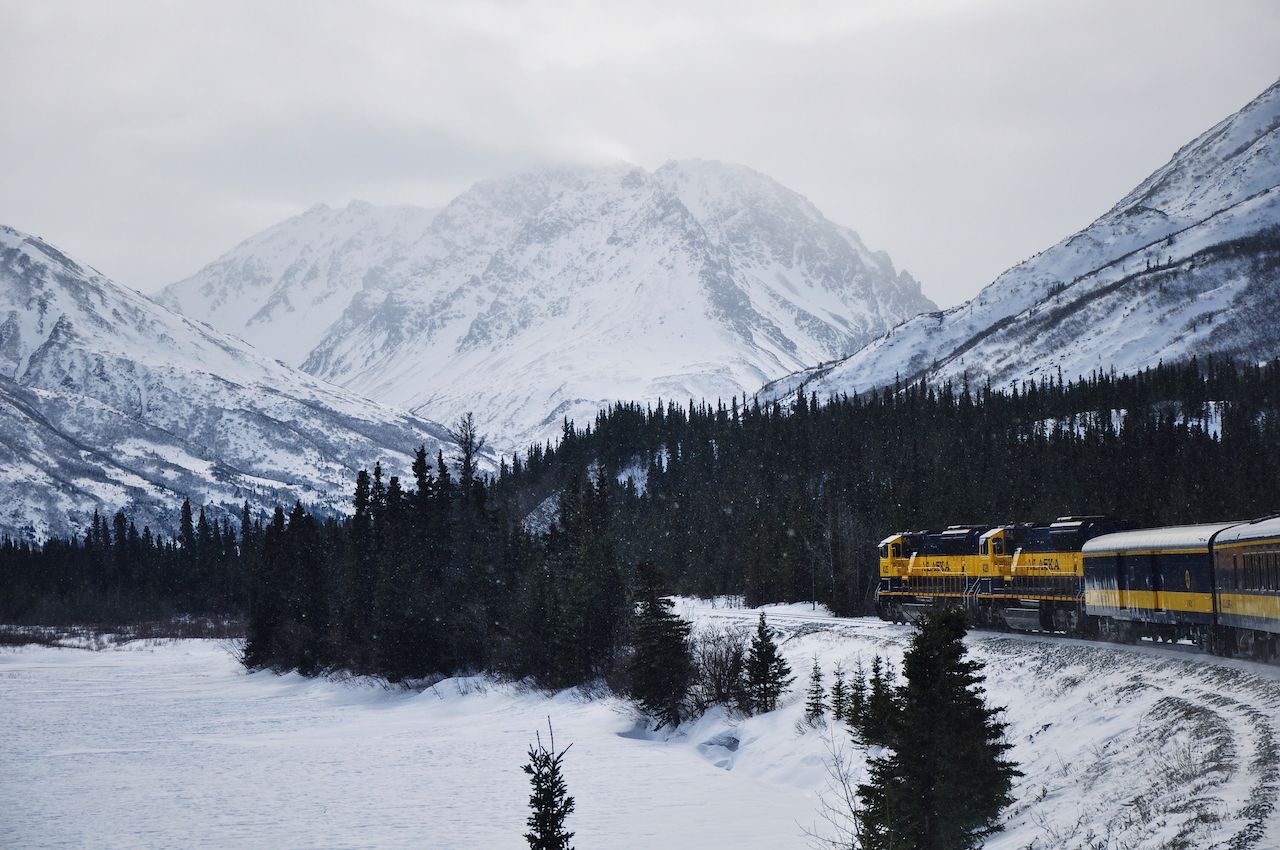 Alaska train trips are generally a summertime venture, but rolling through the deep winter wilderness can be a far more spectacular journey. This week-long journey begins in Anchorage and heads north, traveling past Denali and the Alaska Range. You’ll stop in the little village of Talkeetna and try your hand and mushing sled dogs, where you can also opt for a flightseeing tour over snow-capped mountains.

The nights, as you might have guessed, are long. But that just leaves more time for catching the Aurora Borealis when you get to Fairbanks, which are easiest to spot this time of year. Even if you don’t see the Northern Lights, you’ll get access to Alaskan backcountry seldom reached when it’s cold. Just make sure to pack a good jacket. 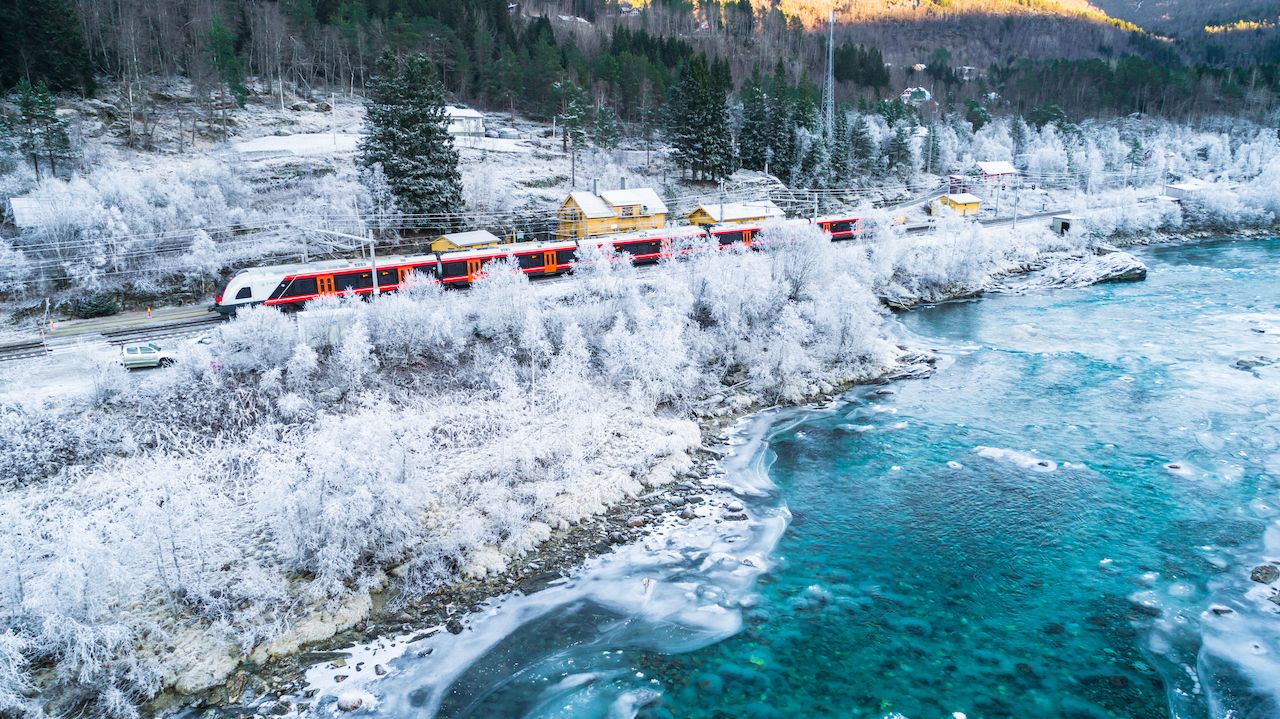 Perhaps the world’s most scenic train trip that starts as a commuter train, this six-and-a-half hour ride between Norway’s two largest cities is the best way to see all the country’s scenic highlights. From Oslo, you’ll start your slow climb into the mountains moving past snow-dusted valleys and winding rivers. Snow-packed peaks pop up in the distance as you move ever faster towards their imposing shadows, blasting through some 182 tunnels as you venture through the mountains.

After a long ascent to the highest station at Finse, you’ll ride over fjords, past waterfalls, and through storybook Norwegian villages. The ride ends with a slow, coastal descent into Bergen — which, while not the scenic highlight of the trip, is still a less-visited city that’s worth checking out for a night. 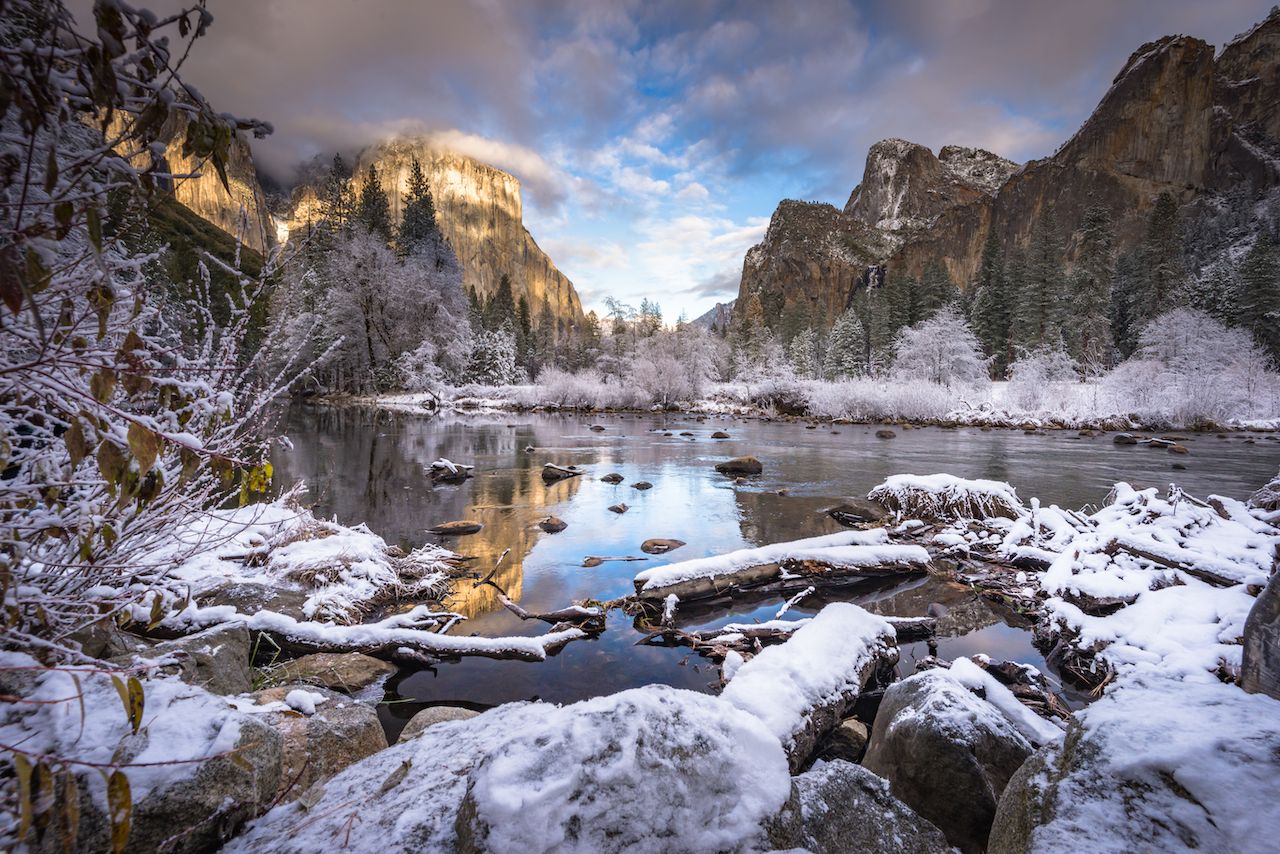 Combining the coastal beauty of Amtrak’s California Zephyr and the vast desert scapes of its Southwest Chief, this 13-day trip from Vacations By Rail lets you see two of America’s most popular national parks in all their winter glory. You’ll begin in Chicago then cross the plains into Colorado’s Rocky Mountains before stopping in Salt Lake City. From there you’ll take a bus into Yellowstone National Park in Wyoming, spending two nights there and another in Jackson.

Upon returning to Salt Lake City you’ll re-board the Zephyr and cross the Sierras into Sacramento where a bus to Yosemite awaits. After a night in the park you’ll continue down the San Joaquin Valley to Los Angeles, where you’ll hop on the Southwest Chief and see the red rocks of the Southwest in a blustery shade of white 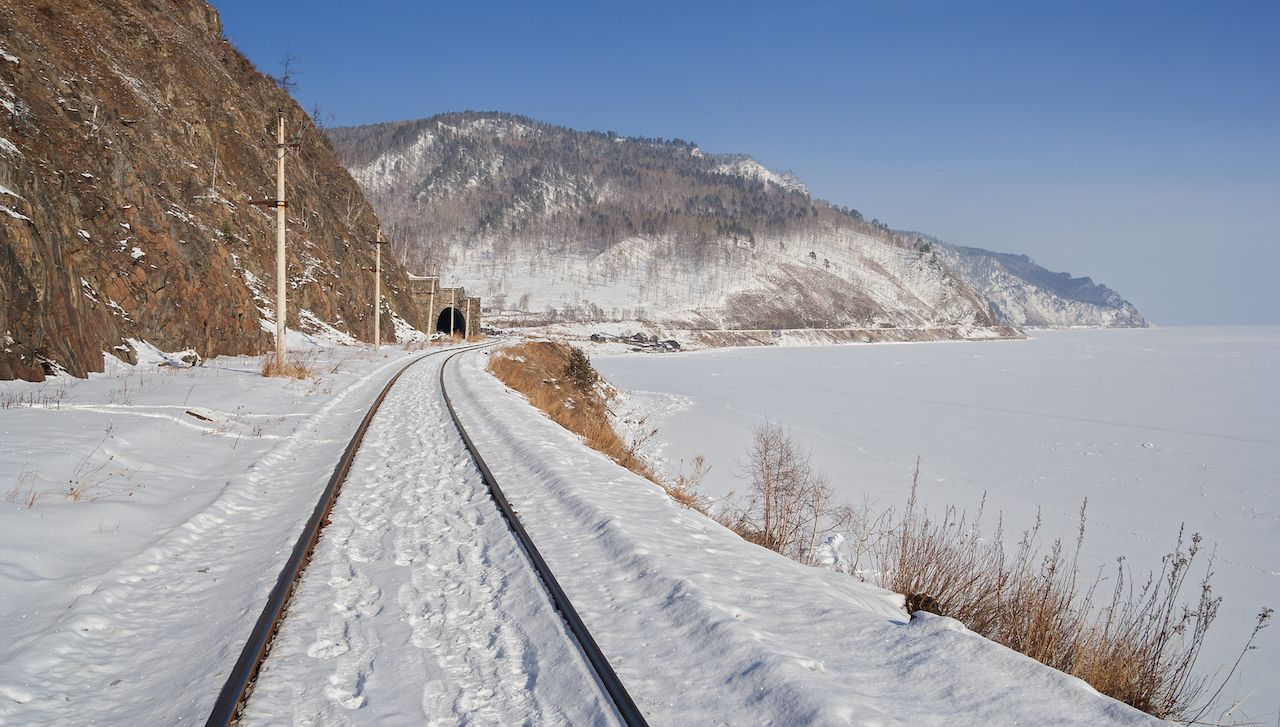 Although, sadly, the orchestra of the same name does not accompany you along the Trans-Siberian Railway, you will see some of the most remote, snow-swept nature scenes in the world. While living here might be punishment, a train trip through it is not — running from Moscow to Vladivostok with spurs out to Mongolia and Beijing.

In addition the winterscapes of steppes and mountains you’ll also see the Russian Orthodox churches in all their winter glory. And have time to appreciate the architecture of cities like Ulan-Ude and Irkutsk along the way. You’ll also pass by the deep blue waters of Lake Baikal and rumble through the steppes of Gorkhi-Terelj National Park. Just make sure you’ve banked some serious vacation time to do this: A trip down the longest railroad in the world can take upwards of three weeks if you go all the way to China. 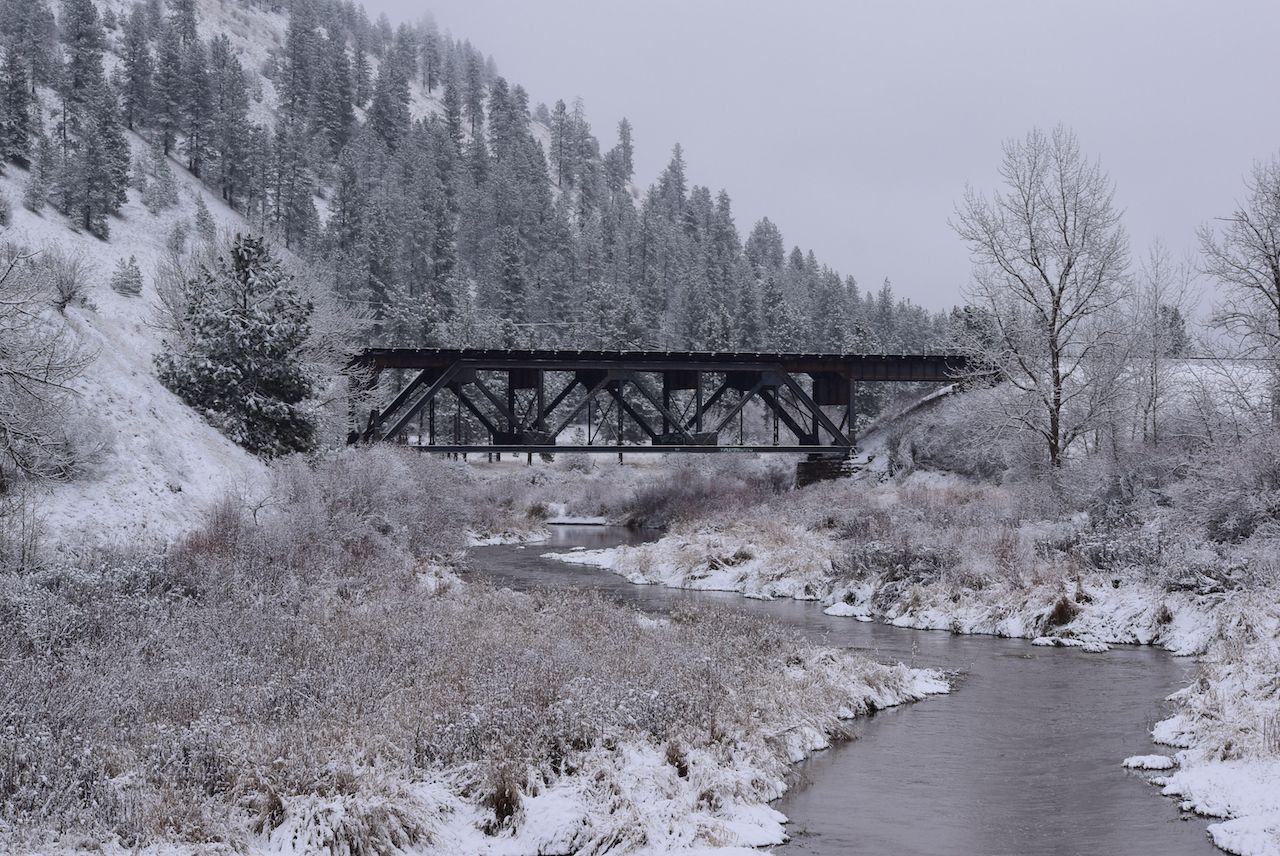 Amtrak’s famous Empire Builder might be the best way to see the American West during any season, but the 2,206 mile trip from Chicago to Seattle yields some especially spectacular views in the winter. If you can brave the cold weather in Chicago, board the train there for a magical journey through the snow-covered prairies, where bluffs look out over endless fields of sparkling plains.

From there it’s into the jagged, snow-capped mountains of Montana and northern Idaho, before crossing the colorful Cascades and descending into Seattle. If you want to check out both cities on either end, Vacations By Rail offers a five-day, four-night package with hotel stays the nights before and after the trip. 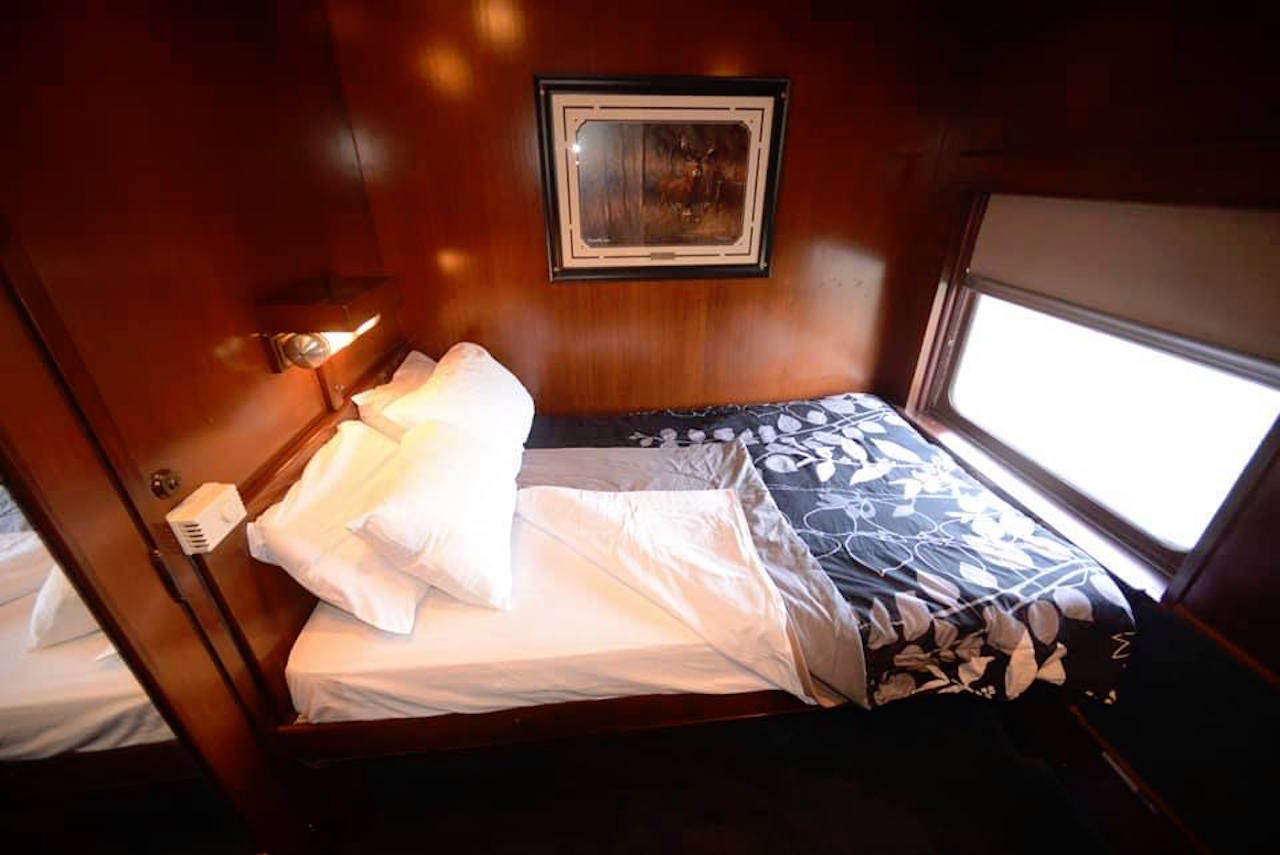 Anyone who’s ever watched a late-season Packers game might think winter in Wisconsin is nothing but frozen tundra and icicles forming on your nose. But in the cozy confines of the Wisconsin Northern Railroad, you can enjoy the snow-covered landscape of America’s Dairyland, minus the potential hypothermia. This short ride traverses the Namekagon River, part of the St. Croix National Scenic Railway, through rolling hills and meandering waters.

The train also doubles as the country’s only bed and breakfast on the rails. You’ll board the train at night for dinner, then take a brief tour through the woods while you eat before returning to the station. You’ll have the evening to converse with your fellow guests, then wake in the morning to steaming hot coffee in a romantic winter setting.

Train TravelThese Scenic Train Rides Take You To the Best Skiing in the World
Tagged
Train Travel Trip Planning
What did you think of this story?
Meh
Good
Awesome