“Taking a train trip through Switzerland” sounds like an overblown cliche of a dream vacation. Like “living in an above-water villa in Tahiti” or “eating your way through Tuscany.” Conjuring up images of sipping coffee as you gaze out big, panoramic windows at white mountains that shine so bright you have to squint. And there’s probably someone yodeling in the background.

And that’s pretty much exactly what it is. We had the opportunity to travel with Vacations By Rail through one of the most scenic countries in the world, using only trains to get from one city to another. And it is every bit the dream vacation people make it out to be. Though the company specializes in designing dream trips on romantic rails around the world, nowhere reaches the scenic perfection of Switzerland. And after a week traversing the Swiss railways, we promise there is no better way to see this spectacular country.

The alps cannot fully be appreciated by car. 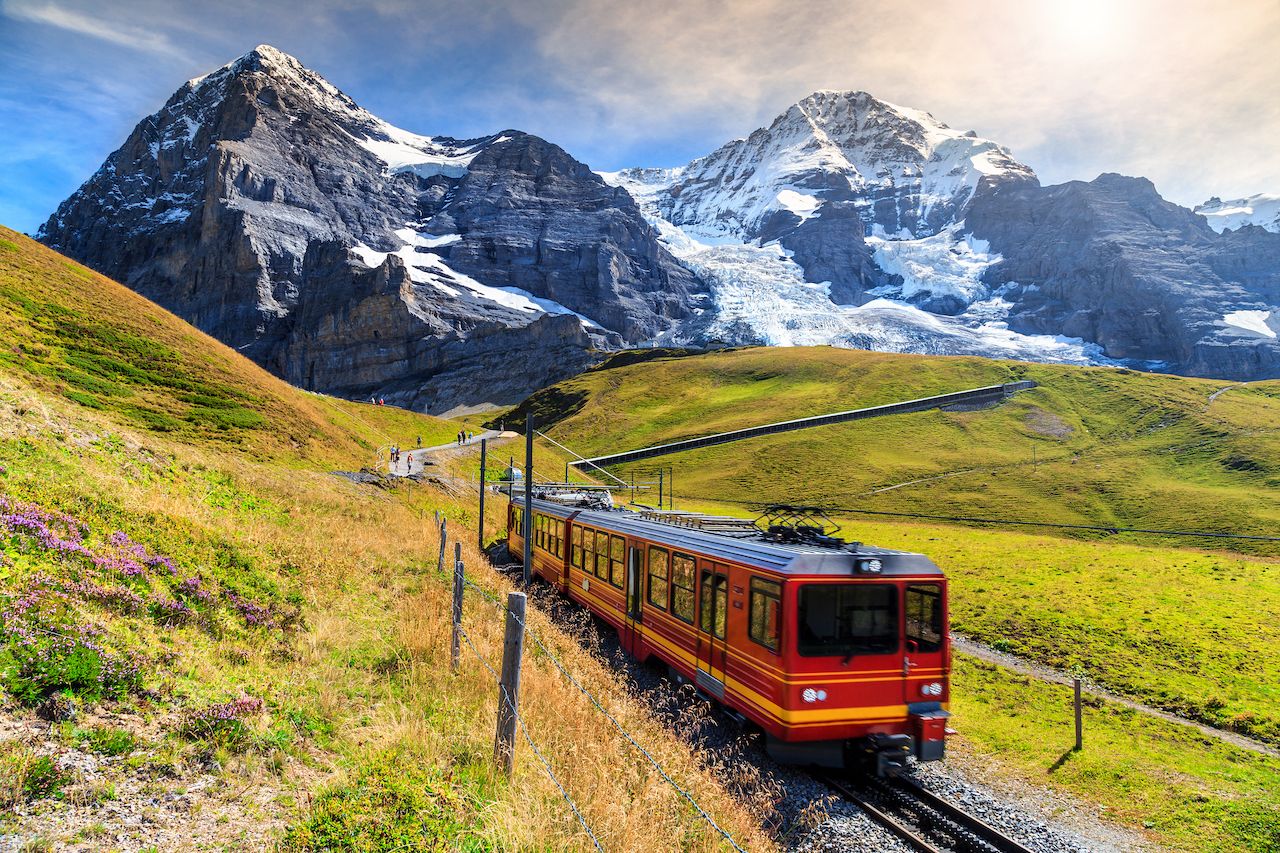 Perhaps before the age of “if it isn’t on Instagram, it didn’t happen,” taking a leisurely road trip through the Swiss Alps would have been feasible. But because rolling through Switzerland is like a daylong photo op, where every new turn brings a new mountain lake surrounded by snow-capped peaks, there’s no way to enjoy the scenery, make sure your feed is full of envy-inducing images, and drive safely.

In a car, you’d either find yourself pulling over every 500 yards to take another selfie, or possibly driving off the road as you try to snap everything while you’re driving. And that’s dangerous. On a train, you can press your phone right up against the window for as long as you like, capturing those lakes, valleys, and picturesque villages without endangering the lives of innocent motorists. Many trains have panoramic cars with glass roofs, which might make your laptop screen a little glary, but allow you to enjoy the views as if you were out in nature.

Nearly all of Switzerland is accessible by train. 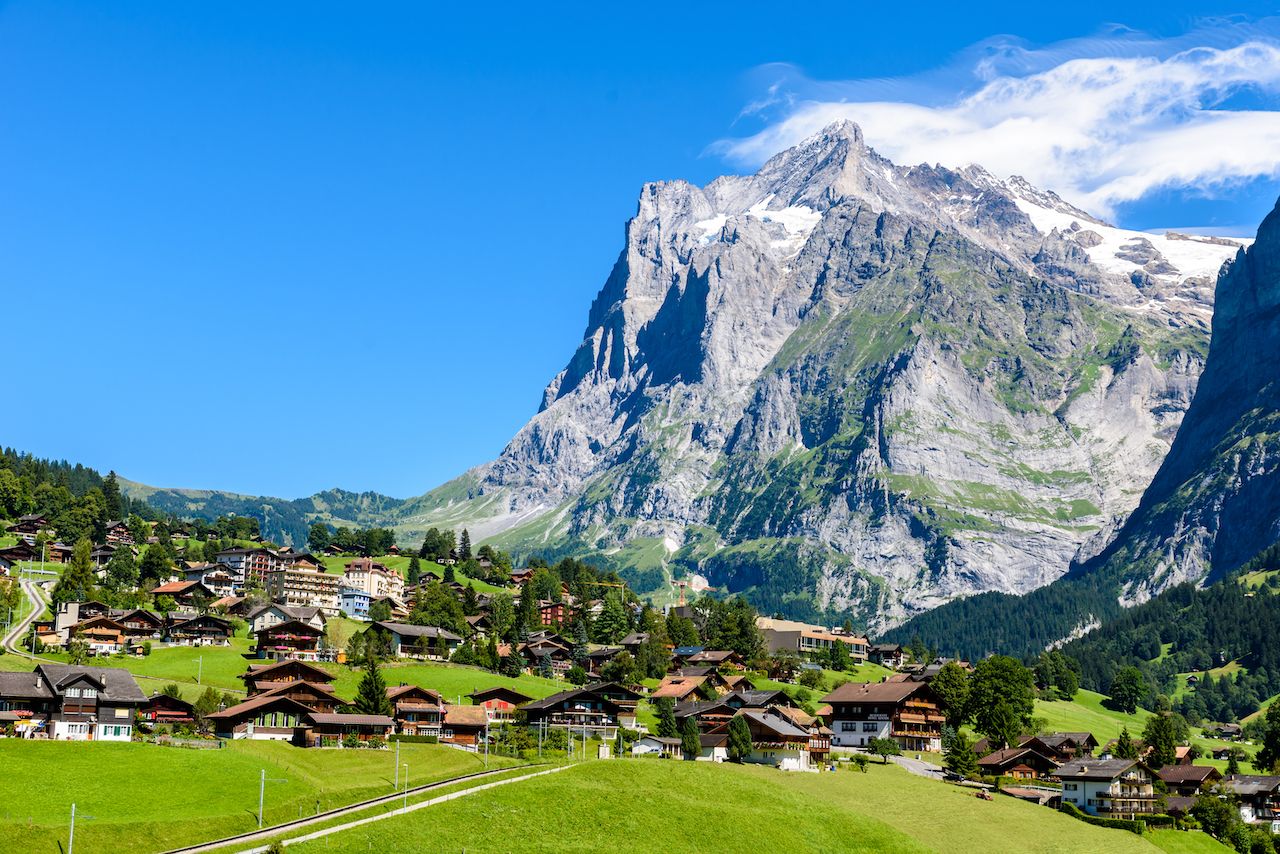 Switzerland has dozens of tiny little villages set up in the mountains that, centuries ago, were completely isolated from the rest of the world. Spots like Poschiavo, with its grand cathedral and sunswept plaza that feels like a little dollop of Italy stuck in the Swiss Alps; or Grindelwald, a village of dark wood chalets with red shutters at the base of the Eiger Mountain, one of the country’s most photographed peaks. The country has effectively connected all of these places by either train or, in some cases bus, meaning you can hop on and hop off in any little town that strikes your fancy.

The trains are easy to navigate.

Unlike the US, where we basically have one main train company, with a few, small regional trains to complement, Switzerland has several railway companies. But you don’t need to worry about any of that because the Swiss, as they tend to do, have made using their trains streamlined and efficient. The Schweizerische Bundesbahne, or SBB, has an app that will find your train times and stations, complete with platform information. And the handy travel pass gets you on all of them.

Buying tickets is also painfully simple, as SBB has a Swiss Travel Pass that links all of its train lines and bus lines, allowing you to take whichever route you want on any given day. A three-day, second-class pass will run you about $240. Eight days is about $425. Fifteen days will cost $525. Look, nothing in Switzerland is cheap, but for a dream vacation through some of the best scenery in the world, spending the cost of a nice car payment is relatively small.

If that’s too complicated for you, don’t sweat it. Vacations By Rail isn’t afraid of a little customization and will lay out an itinerary with all of those details included. It’ll completely minimize the amount of thinking you need to do while dumbfounded by the astounding scenery, which is probably a good thing. 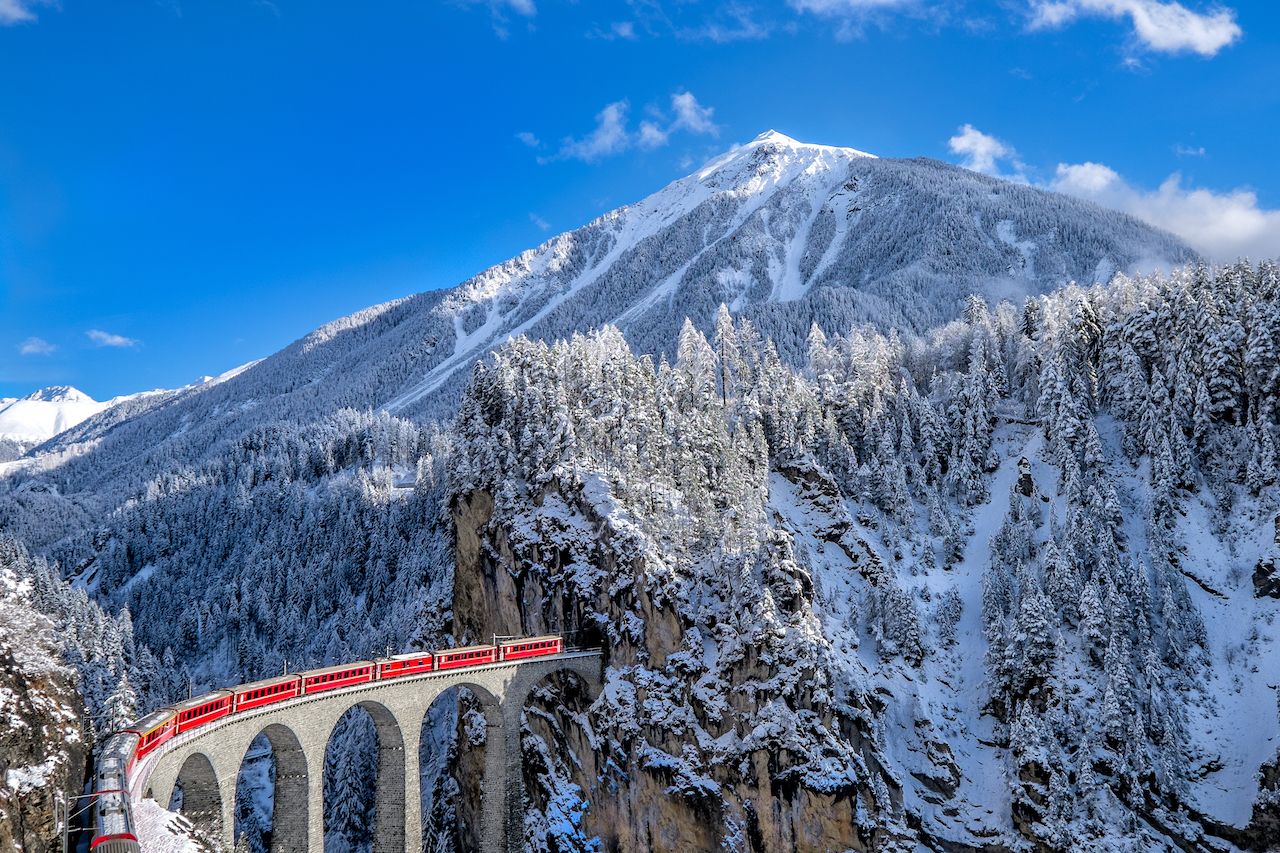 Naming a train “Glacier Express” sets the scenery bar pretty high, as the name implies a sleek, glass-topped train speeding through snowfields and alpine peaks. But this train from St. Moritz to Zermatt does not disappoint, taking an eight-hour journey through the grandest mountain scenery in the world, with glass cars and a full bar.

You’ll wind your way into mountain valleys where pitched-roof chalets sit beside a river, then find yourself rumbling between icy mountains into vast glacier fields. If your vacation goal is to make your friends jealous, few things will accomplish this as well as the Glacier Express.

Except maybe for Excellence Class. The Glacier Express’ top-tier car is a mix of the refined luxury of the golden age of train travel, and the comfort of the plush and modern technology of 21st-century premium cabins. Your eight-hour ride is broken up nicely by a seven-course meal with everything from beef tenderloin to sashimi to avocado soup, all paired with fine wines and capped off with rich dessert.

You can follow your journey and learn about the landscape via a tablet at your seat, or ignore the scenery altogether and stream Narcos on the high-speed Wi-Fi. The seats are like fancy office chairs, and the drinks are included. Though it’ll run you about $750 each way, it’s a vacation splurge that’s absolutely worth the price tag.

The waterside views are just as spectacular as the mountains. 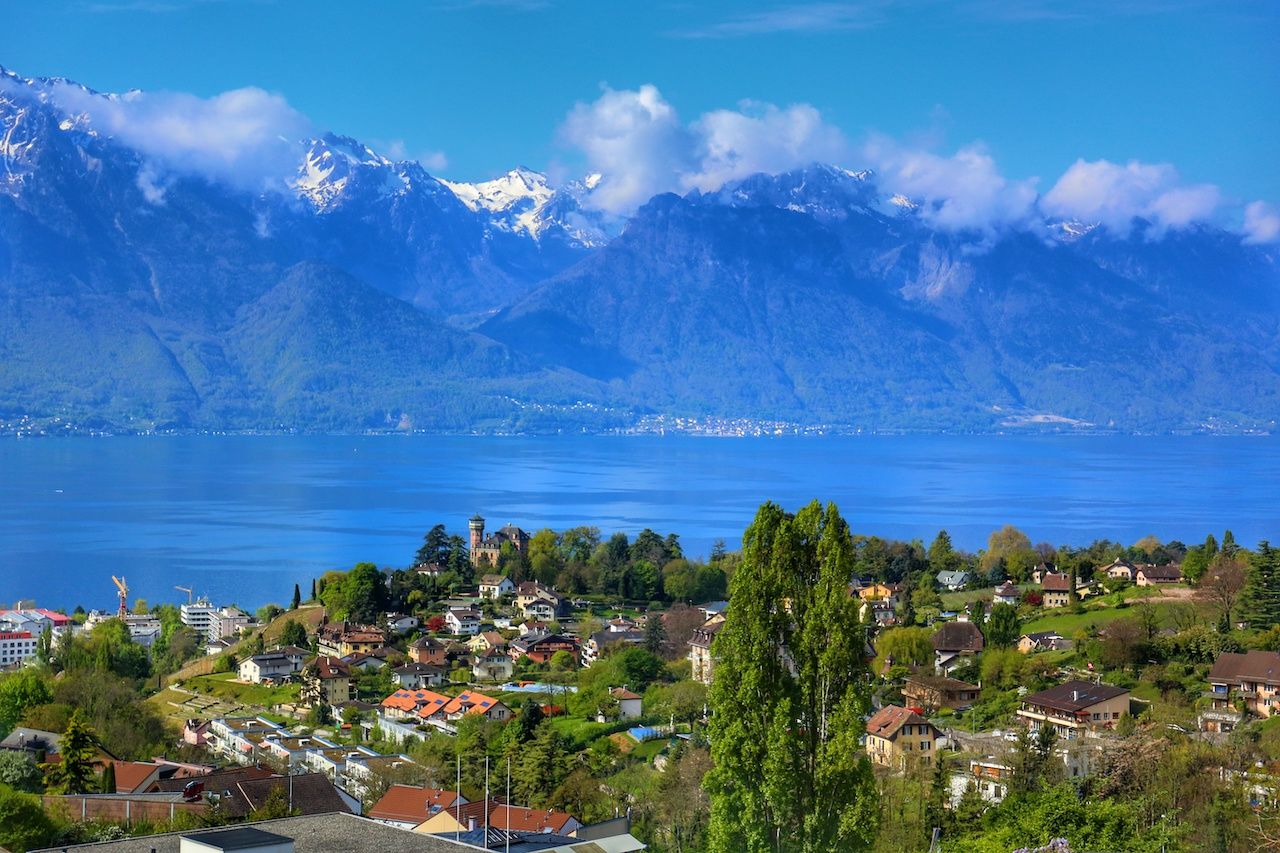 Careening into Montreux, the lakefront city just across Lake Geneva from France, our entire train stopped whatever we were doing to take in the serene views over the calm blue lake. For a solid 10 to 15 minutes, we felt like we were riding right on the water, gazing up at the French and Swiss Alps around us. Just before arriving in the city, we caught sight of Chillon Castle on our left, a storybook nobleman’s’ house — then prison — that’s become one of the enduring symbols of Switzerland. Yes, there are roads that lead into Montreux, but nothing welcomes you to its beauty quite like arriving on a train.

Montreux itself is like some kind of French vacation fantasy land, where hotels in classic French architecture sit on terraced streets from the top of a mountain down to the lake. The streets are immaculate, with a waterfront walking path lined with flowers in perfect bloom. They mix with scores of bakeries to fill the air with the smell of butter and flowers. And as you watch the sunset next to the Freddie Mercury statue on the water, you’ll wonder if he’s sitting in heaven missing Montreux. 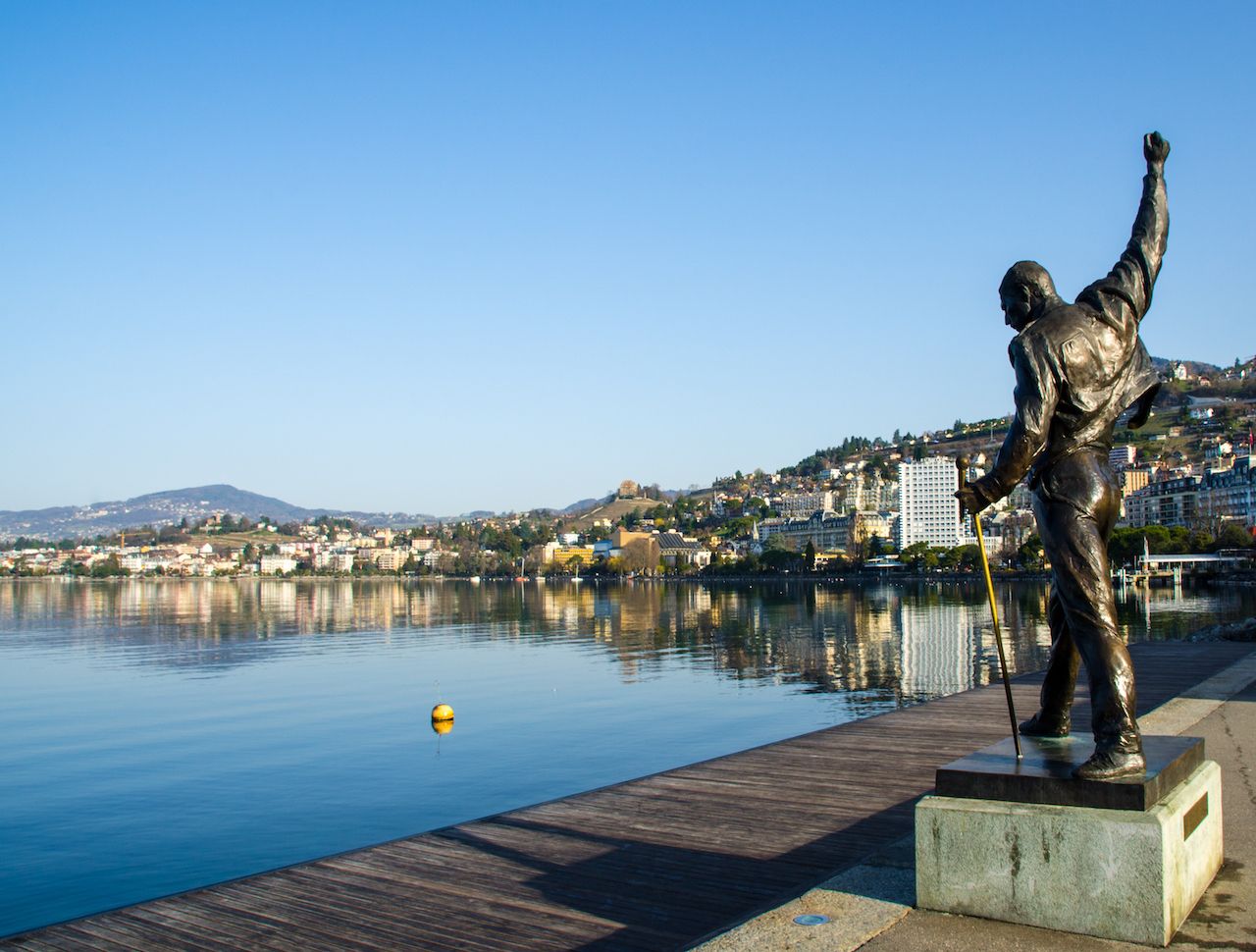 In addition to the iconic statue, Montreux also has an entire Queen museum housed in its famous casino (a fire there was the inspiration for Deep Purple’s “Smoke on the Water”), where you’ll learn more about the band in 30 minutes than you did in all of Bohemian Rhapsody, and sit in the band’s old recording studio to see how the magic was made. After a morning of that, board a train to the Jungfrau region for a full-on James Bond immersion.

The Schilthorn Cableway takes you to the mountain town of Murren, which you will discover within five seconds was the filming location for On Her Majesty’s Secret Service. Longtime employees at Murren’s Hotel Eiger will happily regale you with tales of the cast partying in the hotel bar, which looks today very much as it did in the 1960s. Another cable car takes you to the top of Plz Gloria, a ski lodge that served as the arch-villain Comte Balthazar de Bleuchamp’s hideout in the movie. 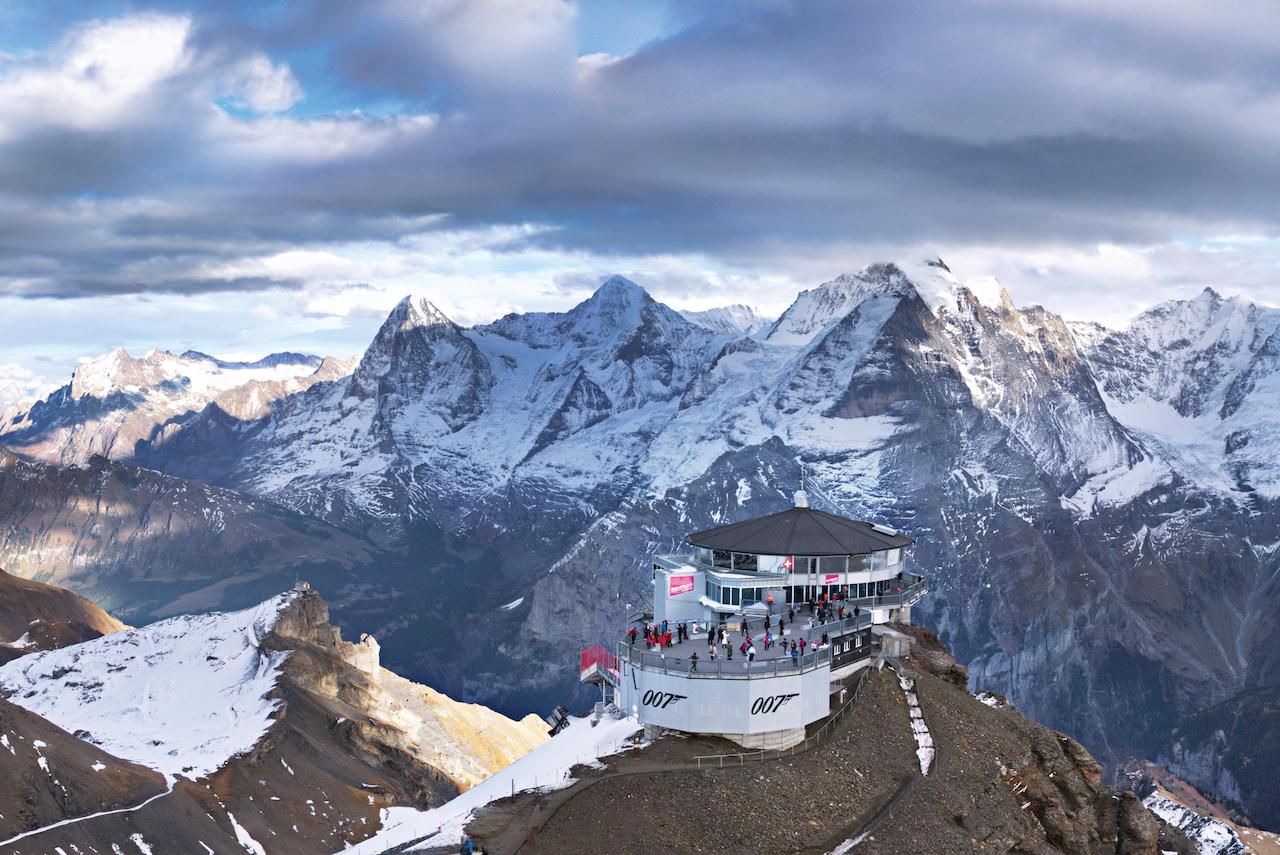 Plz Gloria leans hard into its cinematic past, including a 007 hamburger at the lodge’s revolving restaurant and plastic cutouts of characters on the observation deck. Skip the burger, and instead hit the Thrill Walk. You’ll traverse a cargo net over the Alps, then walk over a glass floor with nothing but air and glaciers below you.

Switzerland certainly has its own identity: Chocolates. Banks. Nine-dollar Starbucks lattes. But unlike some other European countries it doesn’t have a distinct language or cuisine that could, say, be duplicated in a “Little Zurich” neighborhood in America. That’s because Switzerland sits between so many countries that it has become a little bit of each of them, with four official languages and completely different atmospheres in different regions.

Near the Italian border in towns like Poschiavo, signs are in Italian and big, sunny plazas offer pizzerias and cafes with fresh gelato. In Montreux, you’ll feel like you’re on holiday in the French Riviera, complete with restaurant and bar staff who refuse to speak to you in anything other than French. Around the Alpine ski town of St. Moritz and neighboring Pontresina, you’ll find the only part of the country that speaks Romansh. And though Swiss German is the most common language in Switzerland, you’ll feel the influence of the Fatherland most in the adventurous Jungfrau and Bavarian-feeling Zermatt. 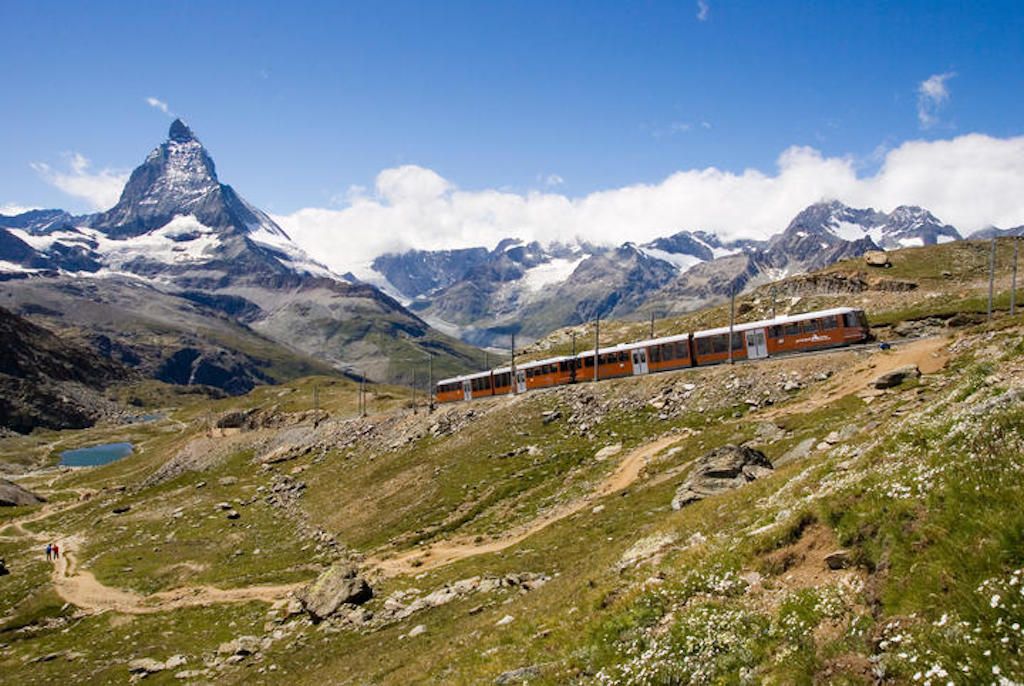 The train ride to the real Matterhorn is better than the three-minute version at Disneyland. Yeah, that big, white, artificial rock mountain that sticks up from the Disneyland skyline is actually a real mountain. It’s just outside the town of Zermatt, and to get up close and personal with the Matterhorn you’ll need to take a 30-minute train trip through trees and views of the town below. The wait is never more than 15 minutes, and the ride itself is spectacular — though no yeti pops up out of nowhere.

You can enjoy lunch at the top, which, while not the best meal you’ll ever have. is probably the most scenic. Skip the restaurant and grab a pizza and a hot chocolate from the snack bar, then enjoy it out on the Matterhorn’s sprawling back patio.

Your costs are minimized.

Ask anyone who just visited how Switzerland was, and their first response will be “expensive.” Or, maybe, “beautiful…..but expensive.” That’s just the nature of the beast here, like the weather being miserable in London or hitting traffic in LA. And though rail passes here aren’t cheap per se, they are an affordable way of seeing everything without paying for gas. You can also eat on the trains, which allows you to have, say, a $15 turkey sandwich instead of a $25 one in a restaurant.

Vacations By Rail works with your budget too, so if you don’t need to stay in four-star hotels throughout the country it can find places that won’t cripple you financially. Food and drinks, you may have to hunt down yourself. But 10 years from now you probably won’t remember the money. But you’ll always be able to casually bust out that one time you took a train trip through Switzerland.

OutdoorThe 7 Most Epic Matterhorn Experiences
Tagged
Train Travel Switzerland
What did you think of this story?
Meh
Good
Awesome

The Ultimate Week in Switzerland, From Fondue To Cliff Walks and Spectacular Train Rides

Near Zurich, Switzerland, World-Class Skiing Is Just Another Saturday in Winter

In Switzerland, Turnips, Not Pumpkins Mark the Fall Season

From Fondue To Raclette, the Coziest Winter Foods Come From Switzerland

How To Spend a Weekend in Zurich Without Going Broke

Switzerland Is Reopening To Vaccinated US Travelers on June 28