Once upon a time, Dubai was comical. It was an overdone, gawdy collection of the world’s tallest this and the world’s only that. In a five-star rating system, Dubai had hotels with 167 stars. If Santa announced he was building an indoor North Pole to build toys all year, it would undoubtedly have been in Dubai. It wasn’t so much a city as a sprawling set of superlatives, built for the world’s one percent to make the rest of us jealous.

But like so many perceptions, its surface reputation was nothing near the truth. The over-the-top displays of wealth and technology might have seemed like a global pissing contest, but they were a crucial part of the long-term vision of then-ruler Sheikh Rashid bin Saeed Al Maktoum. He saw an opportunity to leverage Dubai’s short term oil wealth and turn the city into a global city of the future. He just had to get everyone’s attention first.

The oil money drew real estate money, which drew banks and financial institutions. That money built said 167-star hotels and islands shaped like palm trees, which brought tourists on an airline that can reach 95 percent of the world without having to stop. With special trade zones established in the city and one of the most modern airports in the world, Dubai exploded as an innovation, finance, and technology hub, drawing talent to the desert from all over the world. Once a global sideshow of superlatives, it’s now one of the most culturally diverse cities on the planet — and the perfect place to dip one’s toes into the often misunderstood, fascinating culture of the Arab world. 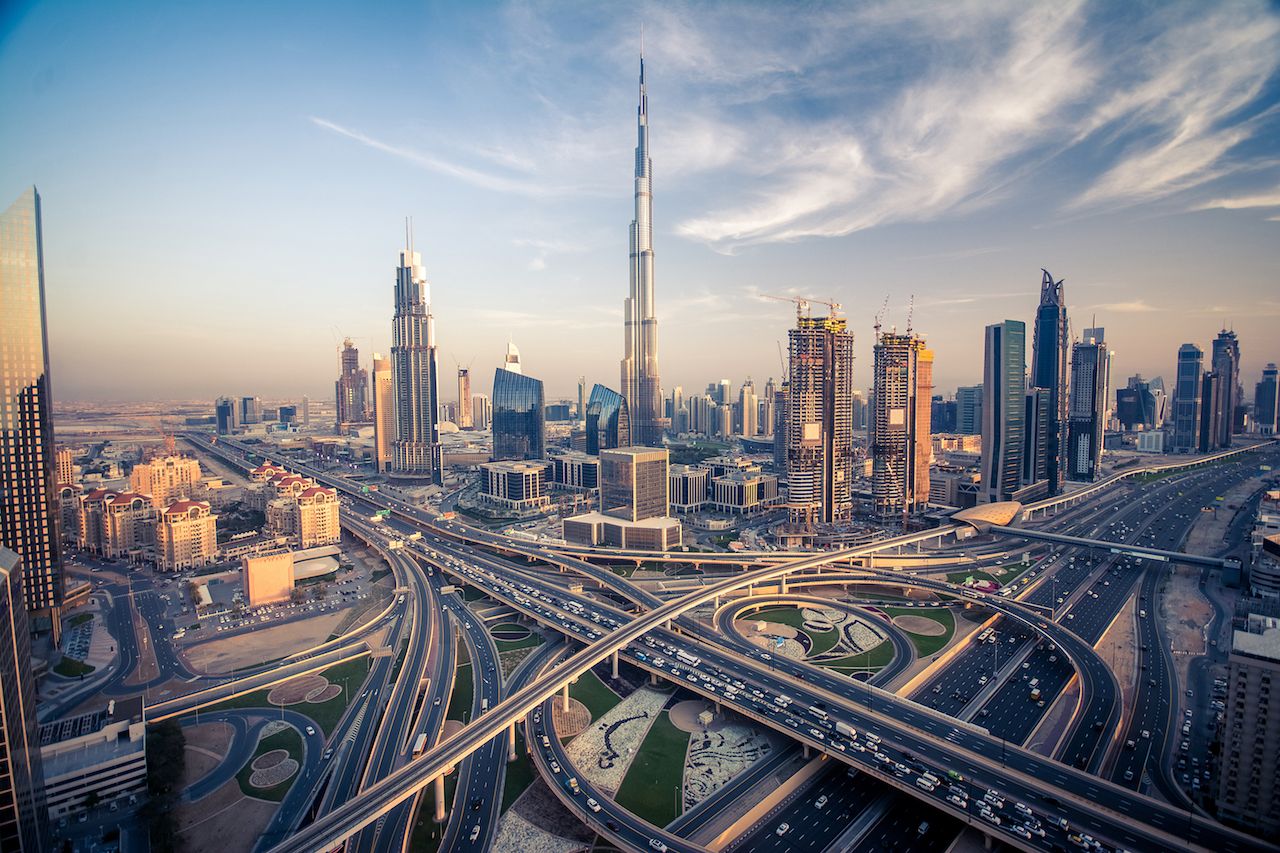 Dubai differs from much of the Middle East because it’s an Arab city populated mostly by foreigners. That’s not to say you won’t find robust local culture here, but there’s enough outside influence that novice travelers won’t experience culture shock. Wait on line at a Tim Horton’s near the Financial Center station and you’ll find men in western suits next to women in business skirts next to men donning traditional long white kandura complete with headscarves. It’s certainly a different experience than many travelers are used to, but it feels enough like home to be comfortable.

The most common question people – especially women – seem to ask about Dubai is if it’s safe for Americans. It seems silly for anyone who’s ridden the fully automated metro trains or spent an afternoon tanning on Jumeirah Beach. Public hand-holding in Dubai is ok. Women can wear swimsuits on the sand (if not on the Metro) and drinking is allowed for visitors in hotels and bars across the city.

It’s not exactly the Sweden of Arabia – homosexuality is still illegal, but polygamy is not. But as far as this part of the world goes, Dubai is a model of progressiveness. It feels global in the way London or Toronto or Miami does, a place where the dominant culture might be of the native country, but it’s reflective of other parts of the world as well. And those more intense rules are rarely imposed on outsiders, making it an ideal destination for a Middle-East-leary traveler to learn to embrace Arab culture.

Much of the tension between ours and the Arab world really stems from a lack of understanding. Whatever one’s feelings on the Middle East might be, learning about the culture is imperative to being a well-informed global citizen. This was the aim when Dubai opened the Sheikh Mohammed Centre for Cultural Understanding (SMCCU) in the old city. It’s a place where getting a deeper understanding of at least one Muslim country is entertaining and, better yet, delicious.

The SMCCU sits in the old city, near the mouth of Dubai Creek. This is where the city began as a ragtag conglomeration of fishing camps and pearl divers. Here a scattering of old buildings alternate with the modern high rises, a remembrance of when this place looked a lot more Indiana Jones than Blade Runner.

Inside the center, a host begins the experience with the one common denominator across all cultures: Food. Guests are seated on a carpeted floor around a large table, upon which hosts place an extravagant spread of curries, salads, grilled meats, breads, and dates, warning the crowd that nobody will leave until the meal is finished. Anything less would be considered impolite.

As guests awkwardly spill food on themselves eating from a seated position with no table, the hosts begin to explain the intricacies of Emirati culture.

“We will answer for you any question you may have,” he says. “If we don’t know the answer, we will make it up.” Honesty, always a good start to cultural education.

“You are allowed to have up to four wives,” he says to a stone-faced crowd. “But nobody does that. You have one wife? Now imagine FOUR.” The attempt at Catskills humor fell a little flat, but the point was well taken. Polygamy might be legal here, but it’s hardly ever practical, and therefore incredibly rare.

“Women here make up almost half our electors,” he continues, explaining the UAE’s electoral process where pre-selected voters pick the Federal National Council and other elected positions. “We have nine women in our cabinet, and two-thirds of government workers are women. And they get to keep everything they make. Because in our culture, the man pays for everything. What she makes is hers to spend on whatever.”

Perhaps he was complaining, perhaps he was just trying to infuse a little comedy into his explanation. But while stuffing us with dates and chicken he also showed us that the country is not so backwards as we might think when it comes to gender relations. And hope exists for the rest of the region to follow. 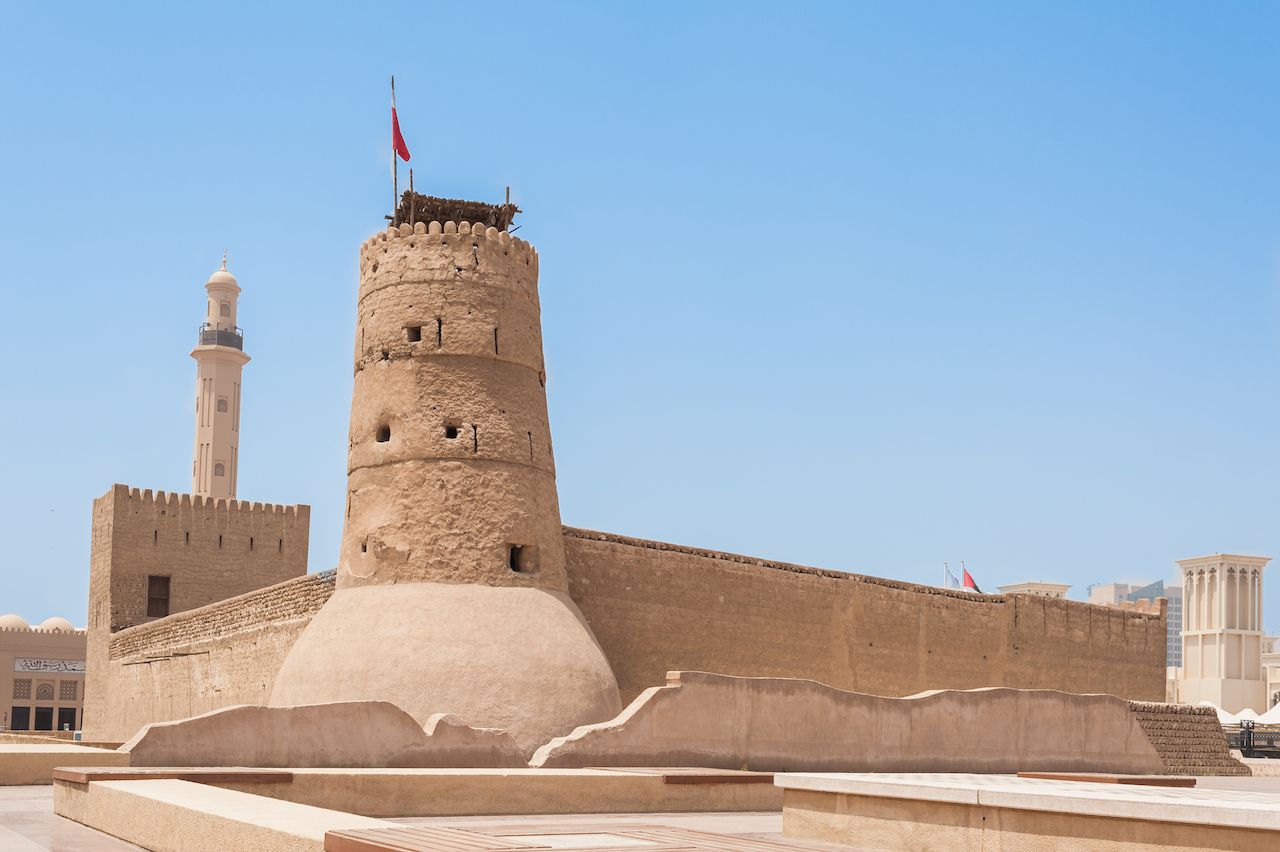 Across Dubai Creek from the old city you’ll find the gold, spice, and textile souks, throwback markets that, though adorned with jewelry only NBA Lottery picks can afford, still feel distinctly Arabian. In the spice souk the smell of saffron envelops the entire market, as hawkers stand in front of their stands trying to lure tourists in for indistinguishable souvenirs. Visitors and expats make up the bulk of the traffic, but that’s the case anywhere here. The bazaar culture still lives on in Dubai, embraced by newcomers as they’ve been embraced by locals.

Also in the old city you’ll find Al Fahidi Fort, the oldest building in Dubai dating to 1787 and home to the Dubai Museum. The museum is an underground labyrinth of live-action mock-ups of the city from decades past. A little like Pirates of the Caribbean minus the boat ride, where animatronic figures speak in pre-recorded voices, set in full-scale recreations of the fishing camps, souks, and workshops that once lined the canal.

What’s fascinating about Dubai is it shows how a culture we know little – if anything – about is not as intimidating as many people perceive it to be. Our faiths and systems of governing may differ, but our ideas about technology, innovation, and human interaction are still largely the same. Dubai may well prove to be one of the most important cities of the 21st century, accomplishing this end by accepting the ideas and values of others. In turn, a city where over 80 percent of the population comes from another country makes teaching their culture a priority to outsiders. For those who yearn to travel deeper into the Middle East but want to ease into the lifestyle, the city’s doors are wide open to open-minded, curious travelers. So if you’ve ever wanted to learn about Arab culture — and check out one exactly how one creates an indoor ski slope while you’re at it — Dubai might be the most educational trip you ever take.

Insider Guides10+ Things You Must Experience in Dubai
Tagged
Culture Dubai, United Arab Emirates
What did you think of this story?
Meh
Good
Awesome

The Ultimate Week in Dubai, From Desert Ziplining To Heart-Shaped Lakes

Dubai Has the Deepest Pool in the World, With a ‘Lost City’ To Explore