“I think food, culture, people, and landscape are all absolutely inseparable,” said the late Anthony Bourdain. In Japan, those three inseparable qualities can be found in ekiben, the iconic packed lunch that has served as a trusted travel companion for almost two centuries.

Ekiben is a popular quick meal that’s neatly packed in a beautiful box. While the food in an ekiben varies, generally each has a balanced combination of meat or fish, vegetables, and rice, and also comes with chopsticks. It’s fast food, but the notion of “fast food” is a lot different in Japan than what you might expect in a place like the United States.

The only aspect that puts ekiben in the same category as “fast food” is the fact that the meal caters to those who are short on time. Travelers pay and go, avoiding long restaurant lines. Eating ekiben while you make your way across the country on a bullet train is the ideal way to both see the country’s diverse terrain and taste iconic Japanese cuisine without leaving your seat. It might take a lifetime to explore all of Japan’s intricate culture, landscape, and history, but you can get started with its cuisine, one ekiben at a time.

The tradition is over 135 years old 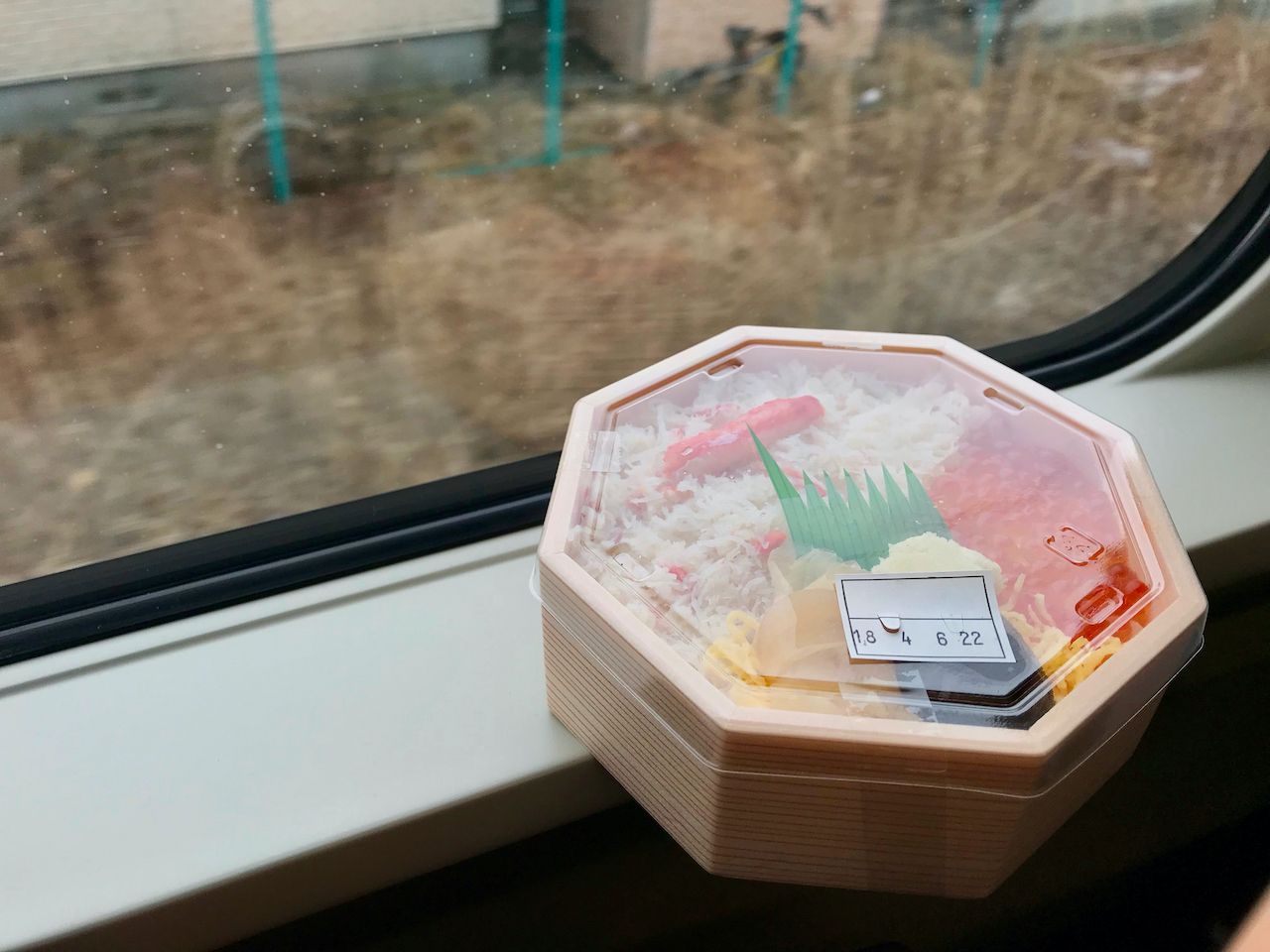 The term ekiben (駅弁) is a combination of eki (station) and bento (lunchbox). Its origin is interwoven with that of the shinkansen (bullet train), as the quick meal was created for the purpose of eating on the train. This union of travel and curated boxed meals began in 1885, 13 years after the first railroad opened in Japan, at Utsunomiya Station. Today, there are over 2,000 types of ekiben, and the bento box has become a sought-out feast for culinary enthusiasts across Japan.

Part of the reason for its popularity is that locals and travelers often choose to take the train over flying in Japan. The bullet train is a novel way to see the mountaintops of Hokkaido, Kyoto’s crystal lakes, and Osaka’s gorgeous foliage. Speed isn’t much of an issue as the train travels at a whopping 200 mph, allowing for complete relaxation onboard the cozy passenger car as stunning landscapes flash by. And as anyone who has eaten in a picturesque location before knows, the sights can be just as important as the tastes.

Eating ekiben on the bullet train has become a destination activity in itself. The iconic train has even garnered a large following. There are over 20 subcategories of railway fans, known as tetsu, Keiko Matsuura, from the Japan National Tourism Organization, tells Matador Network. There are those who like to board the trains (nori-tetsu) and those who like to photograph, video, and record its sounds (tori-tetsu). Fans who appreciate the mechanics and architecture are called sharyo-tetsu, while those who collect the tickets and other items are called shushu-tetsu.

And then, of course, there’s the ekiben-tetsu, “the foodies who board a train to eat a unique boxed meal,” Matsuura says.

Ekiben is a crash course in Japan’s regional flavors 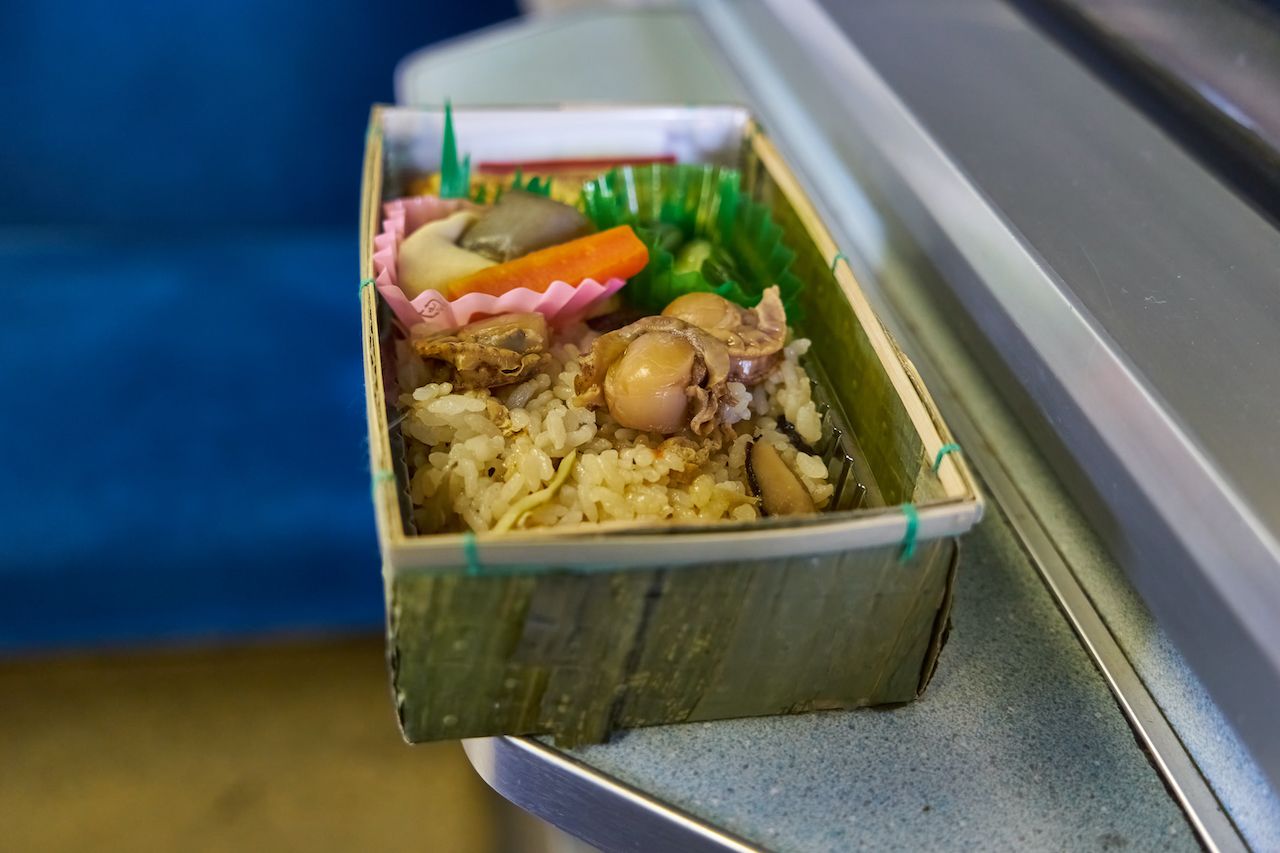 There are common types of ekiben found all over Japan, but each region takes pride in its own variety, which is particular to that area.

While you will find gyutan (grilled beef tongue) in Sendai, you’ll discover something entirely different in Hokkaido, like kani-meshi (crab rice), which is different from the anago-meshi (conger eel served with rice) in Hiroshima. Some of the most sought-after ekiben include pittari tako-meshi — octopus rice with seasonal vegetables available at the Kobe and Osaka stations.

Ekiben isn’t just food, it’s an experience. The boxes are a way to taste expensive dishes on the cheap, such as the Matsusaka motaro bento, which has Matsusaka beef — regional beef valued as highly in Japan as Kobe beef is abroad. This ekiben is one of the most widely collected, too, because of its quirky design. The box is shaped like a bull’s head and you hear a soft melody as you open it.

It takes dedication to try all of the ekiben out there. To help narrow it down, we turned to Takafumi Mochizuki , a writer and ekiben expert, to name the top three to try.

If you like sushi, get yourself the kinka sababou ekiben. Prepared according to a recipe older than today’s widespread nigiri and maki, this mackerel roll is firmly pressed against white rice with the fish skin on the outside. There’s also the sanjyuu-hinmoku baransu bento, which is mostly plant-based and features assorted vegetables and rice, which can be found at multiple stations.

Each ekiben has a unique design 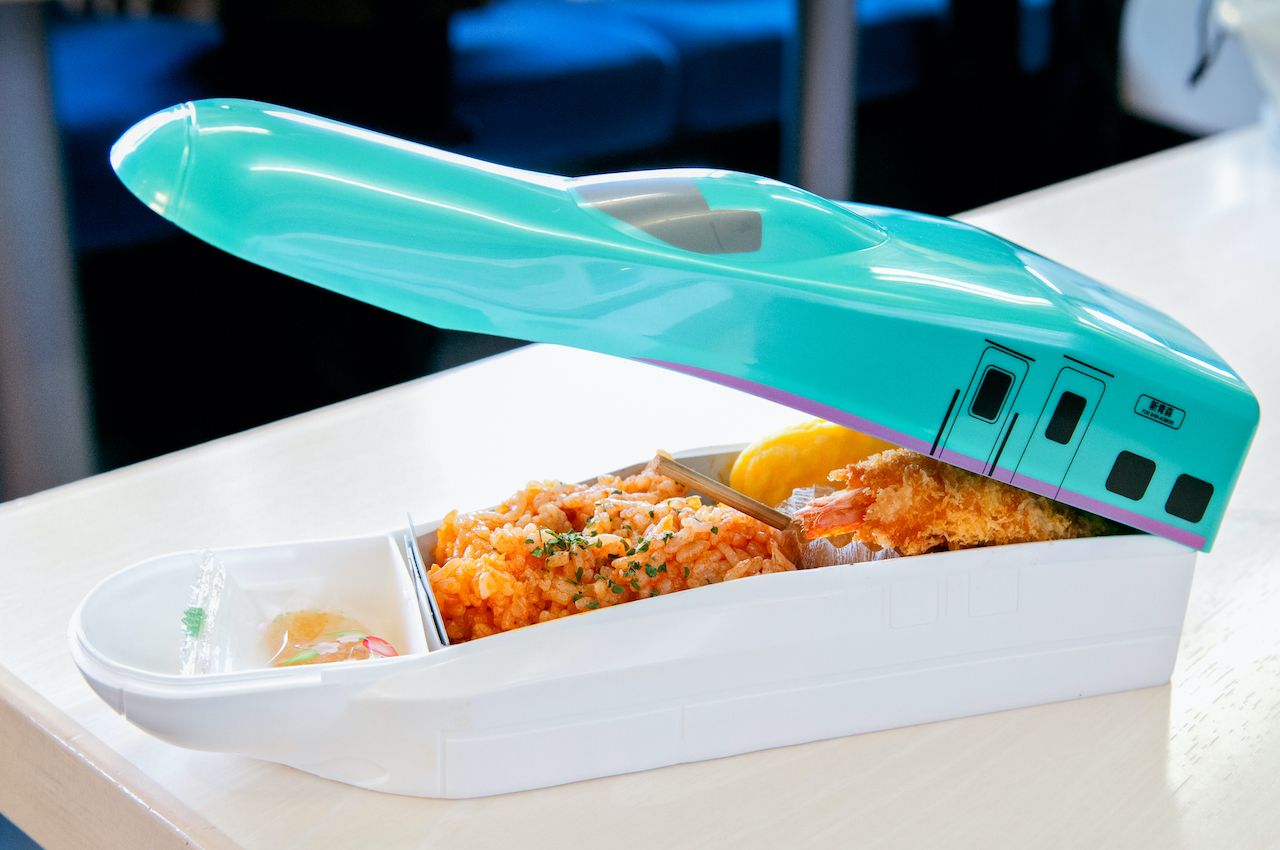 It’s not only the tasty meal that attracts food enthusiasts. The design of the wrapping paper and box make for a great collectible item.

An example of this is the daruma ekiben, which is designed after a traditional Japanese doll that’s used for good luck. After eating from this ekiben, which can be filled with foods like jellyfish, eggplant, cha mushrooms, and bamboo shoots, it can be repurposed as a coin bank due to the opening at the mouth.

There’s even a bullet-train-shaped box — the Shinkansen E7 Kei Bento — that pays homage to the very vehicle that transports it nationwide.

Then there are the wrappers.

Each ekiben comes wrapped in paper with an intricate design, and some feature symbols from their area of origin. Tomakomai’s ekiben comes with a design of an elderly Japanese fisherman catching a massive salmon. There’s also the gold-colored Hello Kitty ekiben, a “premium” rectangular ekiben that can double as a jewelry box.

The ekiben experience is a fun way to learn more about Japan’s regional history and food, and the designs and memories stay with you long after.

Food + DrinkSee the Best of Japanese Cuisine in These Official Food-Themed Taxis
Tagged
Food + Drink Train Travel Japan
What did you think of this story?
Meh
Good
Awesome