When Ellen DeGeneres was a kid, the only magazine she had in her house was National Geographic.

“I was reading it and saw this woman working with gorillas in Africa,” the comedian and talk show host said. “And I had never been out of New Orleans, so when I was a kid it was my dream coming (to Africa), Dian Fossey was my hero.”

Ellen never did become a gorilla researcher like Dian Fossey. But fast forward to 2018, and Ellen’s wife Portia de Rossi gave her a gift that got her close. During an episode of The Ellen DeGeneres Show, de Rossi announced the Ellen Fund would be building a new campus for the Dian Fossey Gorilla Fund in Rwanda, creating a research and education center to continue Fossey’s work for generations.

Four years later, the center opened at the base of Volcanoes National Park this spring. The 45,000-square-foot campus is an awe-inspiring new nature center, and is a must-visit jumping off point for anyone planning a gorilla trek.

A stunning research center for the world 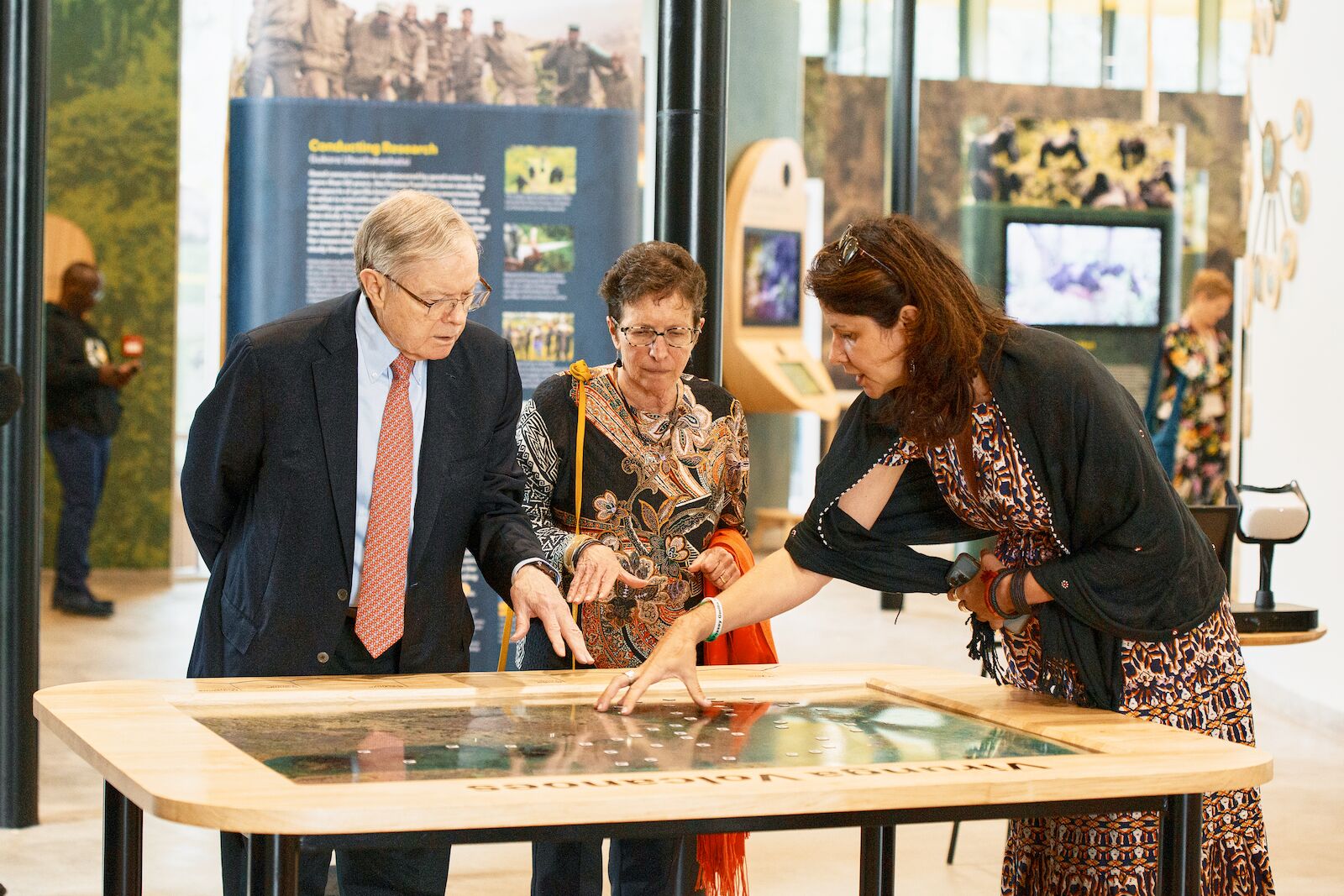 The new Ellen Degeneres Campus of the Dian Fossey Gorilla Fund sits on an old potato farm just outside Volcanoes National Park in northwest Rwanda. The sprawling space spans a dozen acres, with three buildings connected by meandering pathways lined with jungle vegetation. The intent, according to MASS Design CEO Michael Murphy, is to give guests the feeling of being a gorilla wandering through the mountains.

The buildings are equal parts education and research, beginning with a conservation center for visitors, then expanding back into working labs for Fossey Fund scientists. The labs provide much-needed, state-of-the-art space for researchers to continue their conservation efforts.

“We were working out of a rented facility 25 miles away, with one classroom for 400 university students,” Fossey Fund CEO Dr. Tara Stoinski said on a recent trip I took to the center. “We had one lab, it was a previous kitchen, you could fit about two people in it – one trainer and one student. Now we have six labs, and they’re absolutely gorgeous.”

In addition to giving researchers more room, the labs also allow scientists to perform analysis that previously had to be outsourced to the United States. Now, local teams can examine things like stress hormones in the gorillas’ stools to learn what might be stressing them out.

“This campus really serves as a training ground, not just for Rwanda, but for the region and internationally,” Stoinski added. “We can bring career scientists together to think about what solutions we may need for climate change.” 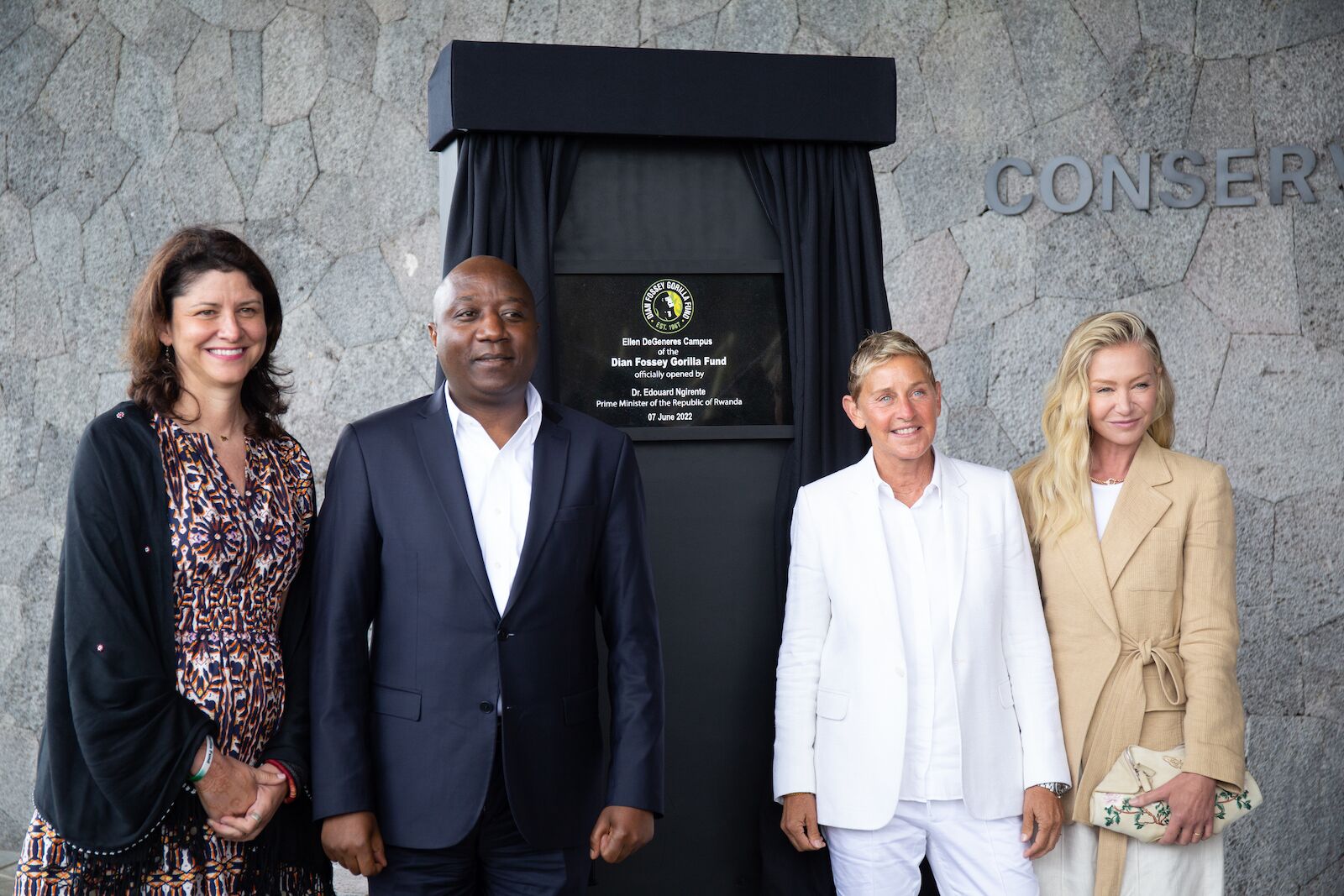 The campus also includes the Rob and Melani Watson Education Center, where school groups and other students can learn all about the Fossey Fund and the importance of gorilla conservation. Since the center soft opened in February, it’s already hosted over 2,000 students and teachers from nearby primary and secondary schools. 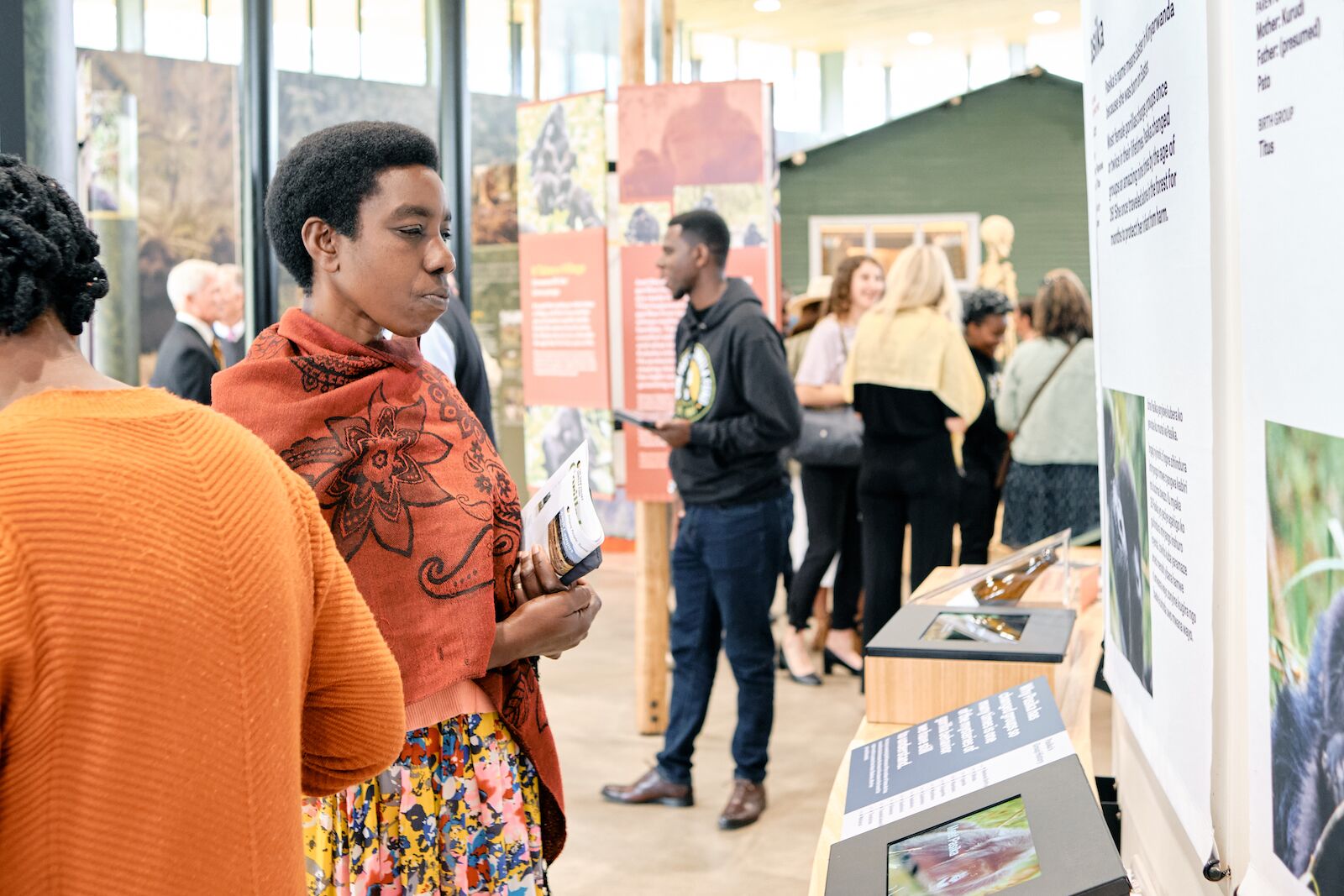 The star of the show, however, is the Cindy Broder Conservation Gallery, which is effectively the museum and visitors center. It’s a stunning, user-friendly walk-through interactive space that tells the story of both Dian Fossey and the gorillas she loved.

The gallery begins with a welcome video from Ellen Degeneres explaining the importance of Dian Fossey and gorilla conservation. It then moves into a timeline of Fossey’s life, through her work with gorillas and her untimely death in 1985. Along the way, guests step into a mocked-up version of her cabin in the jungle, complete with Fossey artifacts like her original desk, research maps, and letters to family that became the basis for Gorillas in the Mist.

From there, guests walk through the Gorilla Hall of Fame, where they read the stories of famous apes like Digit, Maggie, and Titus. The hall offers an interactive “Which Gorilla Are You?” quiz, a little like Buzzfeed with a conservation bent. 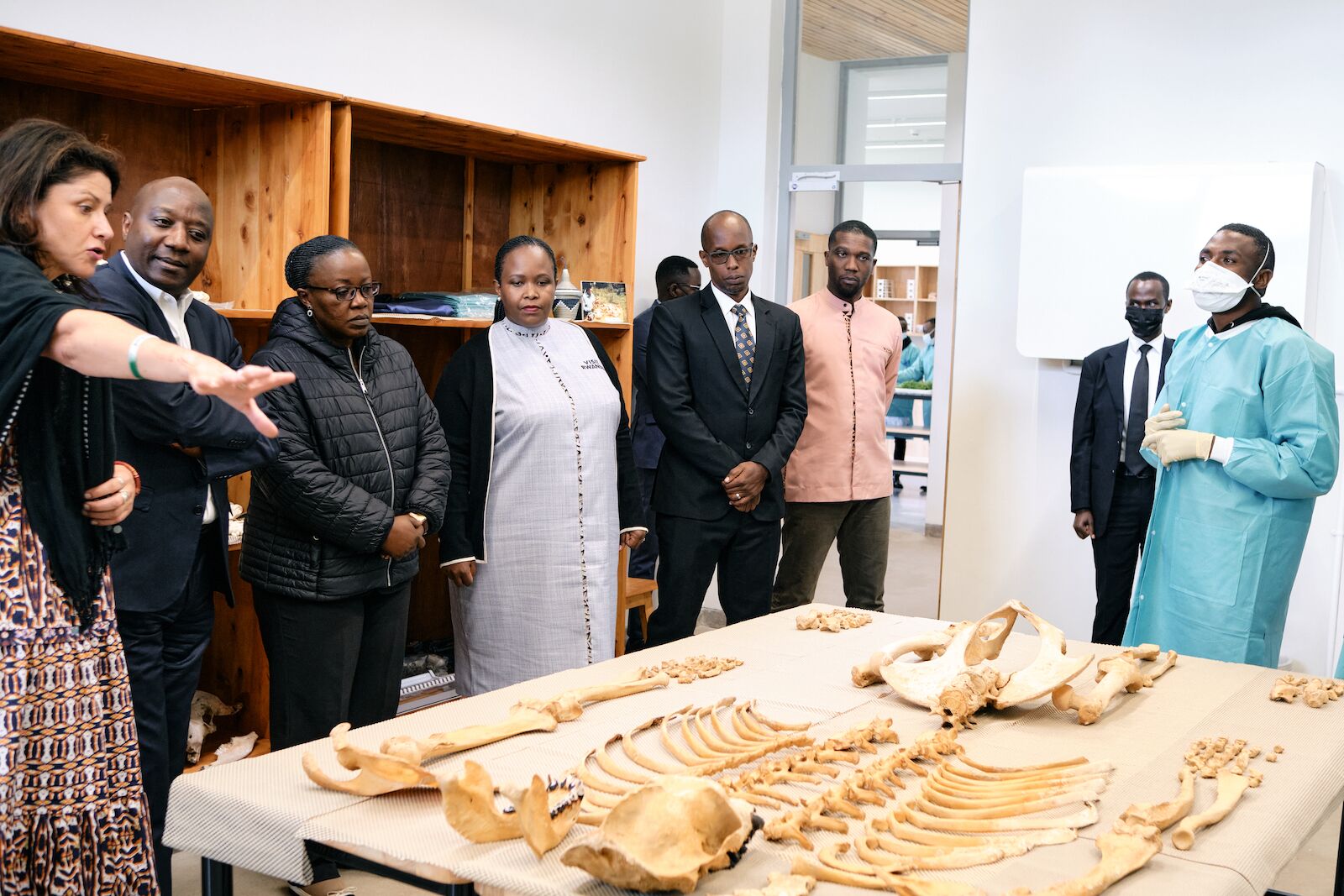 Guests can also learn how to speak like a gorilla (do your best Cookie Monster imitation and you’ve got a good start) and see a real silverback skeleton standing next to a human one. The center also offers a section on gorilla conservation and what visitors can do to help. There’s also a 360-degree movie theater courtesy of Leonardo DiCaprio, where a juvenile gorilla from one of the local gorilla families leads guests through an immersive day in the life of a primate.

It ends in a gift shop that has far more than typical museum kitsch. The Azizi Life store features gifts crafted by local artisans, where each purchase goes directly to support Rwandan communities. Everything from hand carved kitchen utensils to masks and peace baskets are on display, all reasonably priced with tags explaining the people who made them.

Green space that helps the community 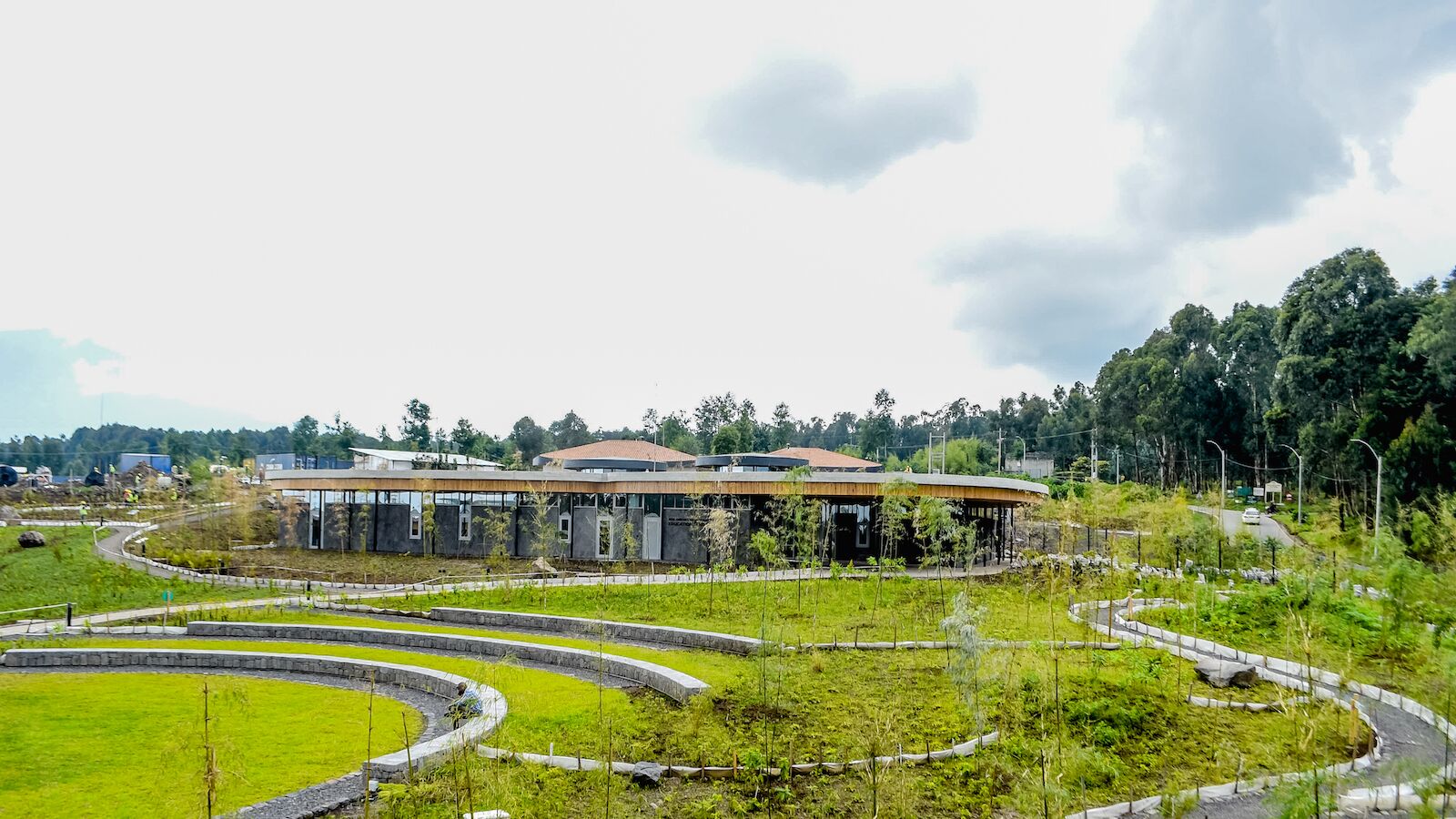 The campus’ landscape and design is almost as impressive and important as the work going on inside. The three-year construction project employed 2,400 local workers, nearly a quarter of whom were women.

The stones that bolster the center’s walls and pathways are all volcanic rock from the surrounding landscape, hand cut by masons during the construction process. Each building is also topped with a Green Roof, where native plants attract birds, bees, and other species with additional elevated vegetation.

“It was incredibly important that we try to be intentional about every design decision, having a maximum impact on the people and the places in which it serves,” Murphy said. “It’s our responsibility to make something that has meaning and endures.”

Beyond its aesthetics, the new Ellen Campus gives aspiring gorilla trekkers a natural jumping off point, and a place to educate themselves on the animals and environment they’re about to explore. It serves the dual purpose of providing an educational resource for visitors, and a space for scientists to further their research, accomplishing a dream Dian Fossey would no doubt admire.

“There are so many stories that will come out of this one place, the one idea,” de Rossi said. “And I think that’s what I’m most proud of.”

TravelIt’s Time To Visit Kigali, Rwanda, One of Africa’s Most Influential Cities
Tagged
Sustainability Wildlife Rwanda
What did you think of this story?
Meh
Good
Awesome