If you were alive in eighth-century England, you might have heard the local nobleman proclaim “waes hael” — be in good health — at the banquet celebrating the new year. Then you, along with the assembled crowd, would shout “drink hael” in reply, taking a sip of cider from a communal bowl. This tradition, which developed well before the spread of Christianity, became known as wassailing. Yet as the centuries passed, wassailing evolved from a toast to the health of your neighbors to a ritual that scared evil spirits out of apple orchards. Today, a friendly modern version of drinking is being revived in England and the apple-growing regions of the Northeastern United States.

Historian Robert Doares writes that, from the beginning, wassailing has been connected to drinking, celebrating, debauchery, and cider. Before battles, 11th-century Saxon warriors sometimes recited a toast that included the lines, “Rejoice and wassail / Pass the bottle and drink healthy.” Another legend from around the same time recounts that a goblet filled with spice wine would be offered as a tribute to a king, along with the blessing “was hail!” The tradition of wassailing — offering a blessing of good fortune and health — was so ingrained in English culture that it even appears in the epic poem Beowulf, which laments that “no harp resounds, in the courts no wassail, as once was heard.” 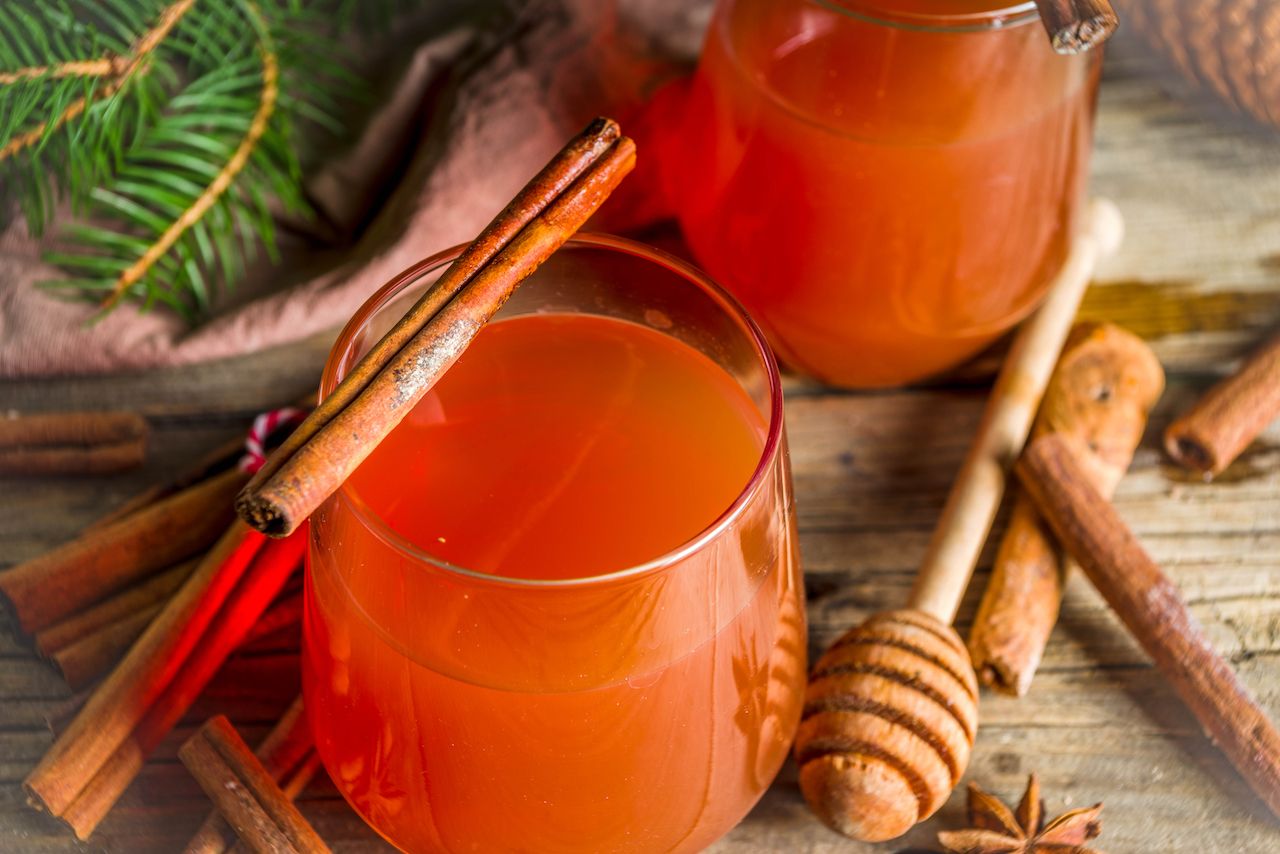 A typical wassail drink consisted of “warmed ale, wine or cider, blended with spices, honey and perhaps an egg or two,” according to historian Ellen Castelow. The mixture was served in the wassail bowl (essentially a large drinking vessel) with pieces of toasted bread floating on top (hence the origins of the word “toast” as a term for speech accompanied by a drink).

Banquets where wassailing happened often occurred around wintertime when locals would gather to pay tribute to noblemen. Each party guest would call out “Wassail!,” give their neighbor a kiss, and then take a sip from the wooden wassail bowl. The custom survived all the way into the Renaissance.

In medieval Britain, however, wassailing inspired another tradition. On the Twelfth Night — January 5, the last day of the 12 days of Christmas — farmers took to their apple orchards, singing songs, banging pots and pans, splashing the trees with cider, and drinking to the health of their oxen. The ritual scared away evil spirits from the orchards and blessed the trees so that the following Autumn would yield a plentiful harvest. Revelers often placed bread soak in the wassail drink on the branches of the trees as an offering to appease the tree spirits and prove that last year’s crop had been fruitful. 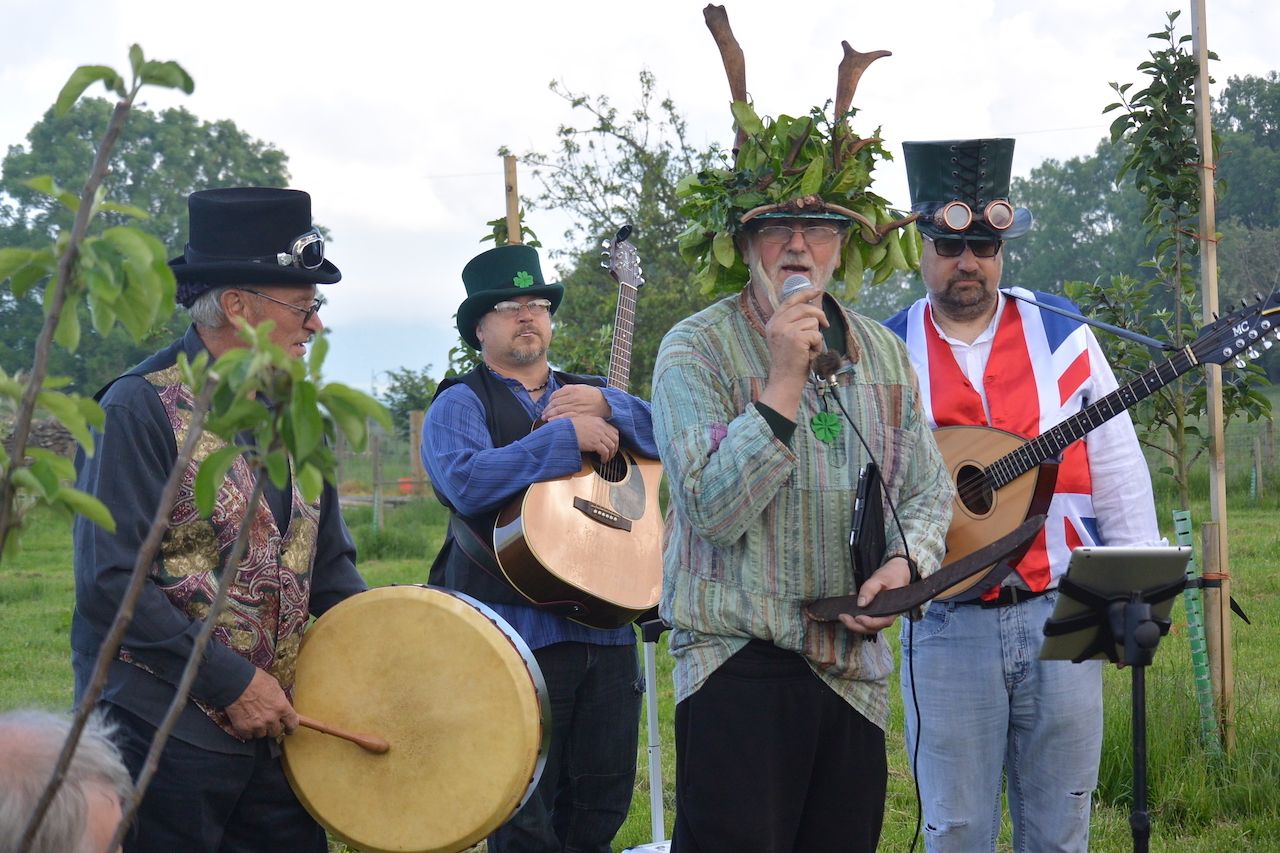 From here, the history of wassailing turns dark in England and New England. Alexandra Coghlan’s book Carols From King’s recounts how, throughout the 1600s and 1700s, groups of young men went door to door demanding entry to the living room as well as a hot drink, sometimes forcing their way in and growing violent if they were refused. Around the same time, troupes of wassailing young women sang carols to their neighbors and offered them a hot drink of cider or spiced wine — demanding money in return. In 1712, one fed up Bostonian wrote that Christmas time is marked by “Mad Mirth, by long eating, by hard Drinking, by lewd Gaming, by rude Reveling.”

Despite rowdy locals taking advantage of their neighbors’ hospitality and any opportunity to get drunk for free, wassailing the orchards remained a widespread tradition up until the 18th century. For hundreds of years, the custom almost entirely vanished. However, in the mid-2000s, a wassailing revival began in England, and the tradition is once again flourishing throughout the country. 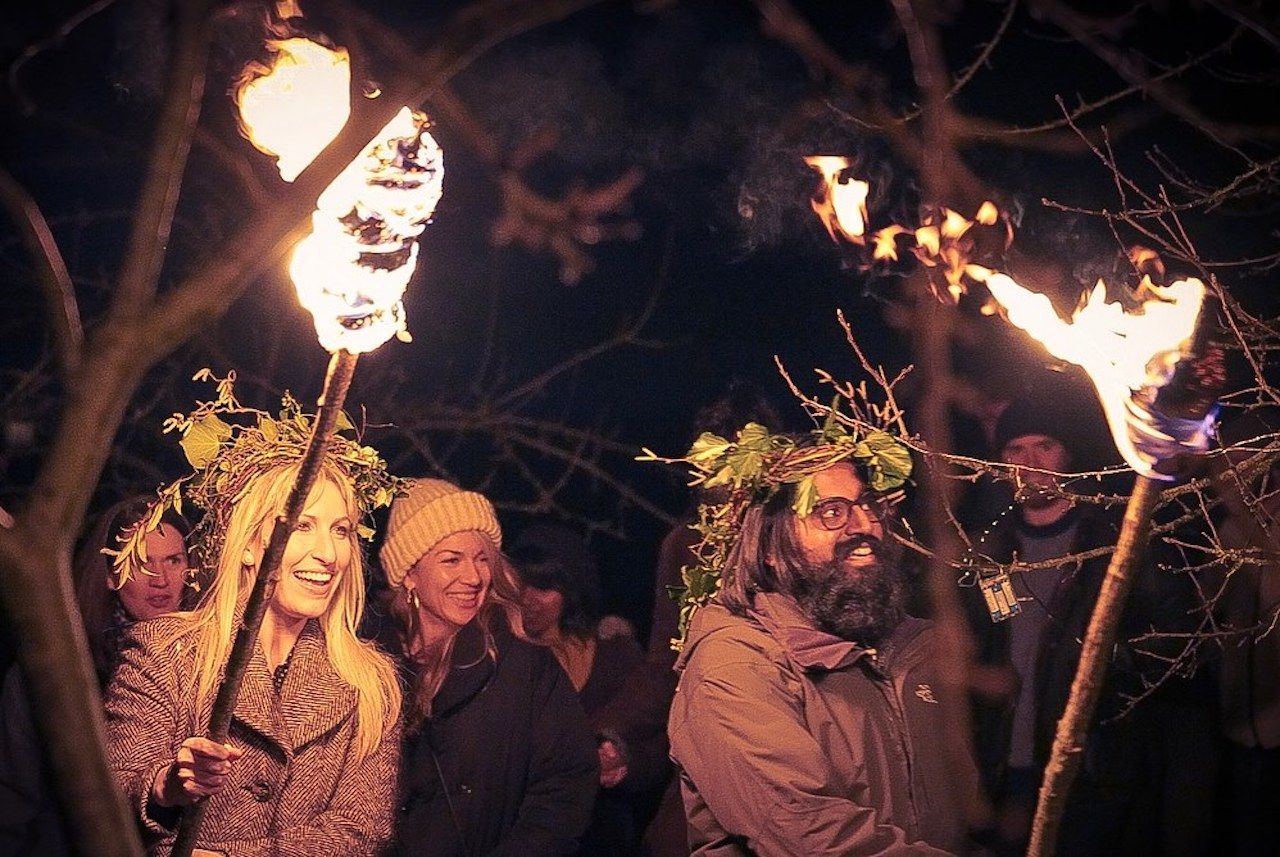 Most modern wassailing celebrations revive ancient customs: At The Fleece Inn, in Worcestershire, the annual orchard wassail takes place on January 11 and involves Morris dancing, elaborate costumes, a procession to the orchards, and lots of live music and yelling of “was hail!” to wake up the trees and scare away spirits. The Ethicurean restaurant in Bristol serves a four-course meal for its wassail celebration, followed up by a torchlight parade to the orchards led by the wassail king and queen, a Mummers play (an English folk play usually involving a sword fight), the banging of pots and pans among the sleeping trees, and a large fire ring. Other orchard wassails, in places like Cumbria, Devon, and Somerset, still hang toast soaked in wassail on the tree branches as an offering, and almost all of them involve cacophonous noise-making.

There are also some farmers who have kept the wassailing tradition alive in the US, especially in the orchards of upstate New York.

Fly Creek Cider in Otsego, New York, holds Wassailing Weekends throughout November as an opportunity for visitors to learn how to make traditional wassail. The cidery’s current owner, Bill Michaels, who inherited the family business from his parents, says his current wassail recipe was passed down to him by his mother. Visitors can grab a jug of Fly Creek cider and a sachet packet filled with a mixture that includes cloves, anise, nutmeg, and allspice to make their own batches of wassail at home for holiday parties and family gatherings. 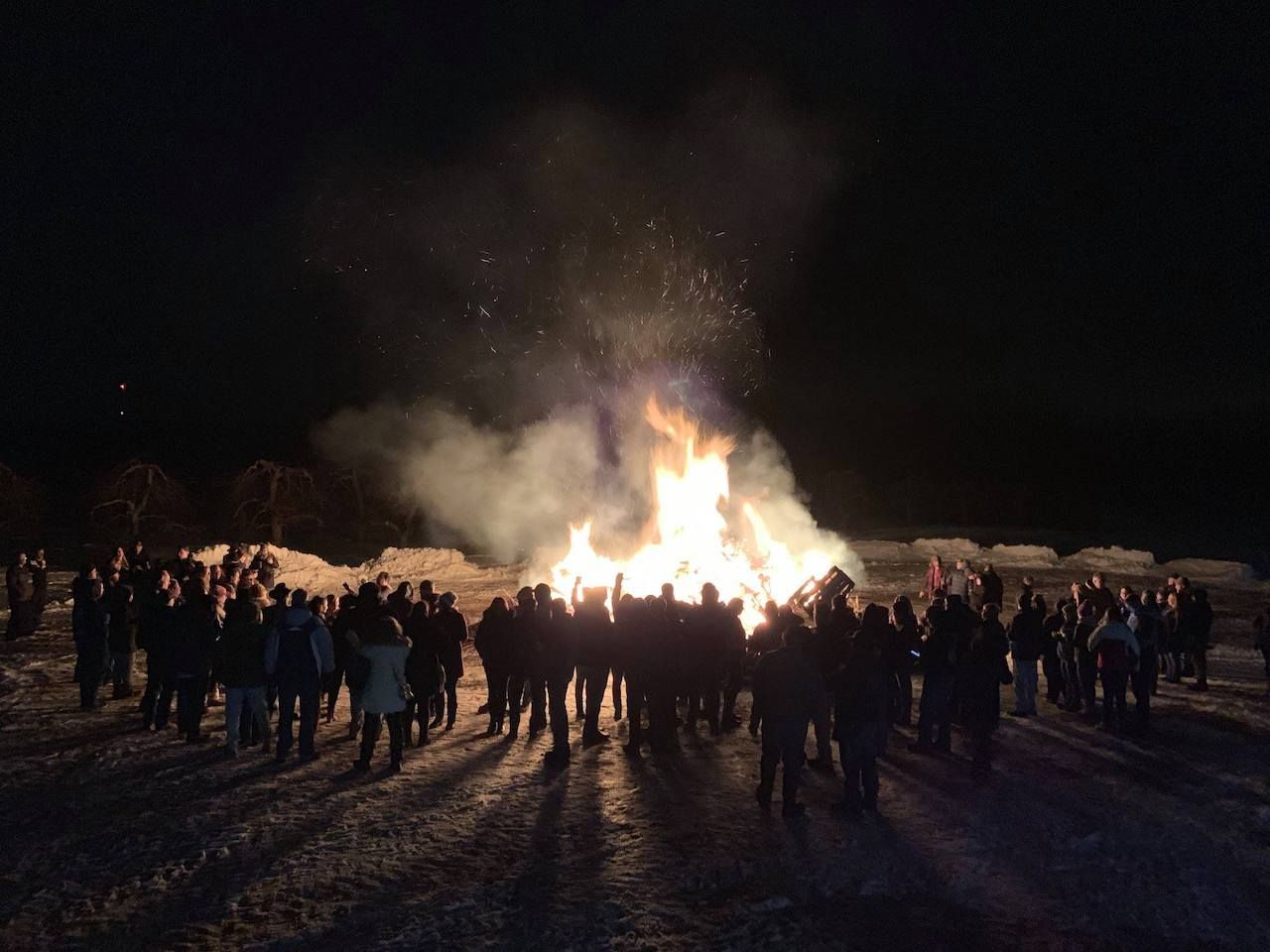 The custom of celebrating the harvest and scaring evil spirits out of the apple trees hasn’t gone entirely extinct, either. Since 2015, DeFisher Fruit Farms (and its accompanying cidery, Rootstock Ciderworks) in Williamson, New York, has held an annual wassailing celebration at its orchard. The event invites guests to enjoy an evening singing to trees to them make happy, as well as banging pots and pans near the trees to evict any negative energy from the orchard. Revelers can then enjoy a bonfire, more singing and live music, and a buffet (burgers and pierogies have been offered in the past) that includes hot wassail to drink, of course.

Luke deFisher, a fifth generation farmer who operates the orchard with his father and grandfather, calls the annual wassail a raucous “winter party.” The family holds the celebration when the weather is coldest (usually in January), and some people even arrive on their snowmobiles.

The wassail won’t be held in 2020 as the family is focusing on growing their business, but Luke nevertheless thinks wassailing is a tradition worth saving — even if it has moved on from the days of waes hael and drink hael.

A major US outdoor film festival is going virtual. Here’s what to watch.

May 4, 2021 Eben Diskin
✖
travelstoke
Download the mobile app
stoked by