Coastal countries are made for scenic drives. When the coastline in question belongs to Croatia, whose seaside towns hug the Adriatic for 3,600 striking miles, any inclination toward a road trip becomes nearly irresistible. So why fight it, we say.

To make the siren call of the Croatian coast that much harder to refuse, we’ve even done half the legwork for you, mapping the ultimate route from Istria to Dubrovnik. All you have to do is secure some wheels and delight in one of the Mediterranean’s most enchanting drives. 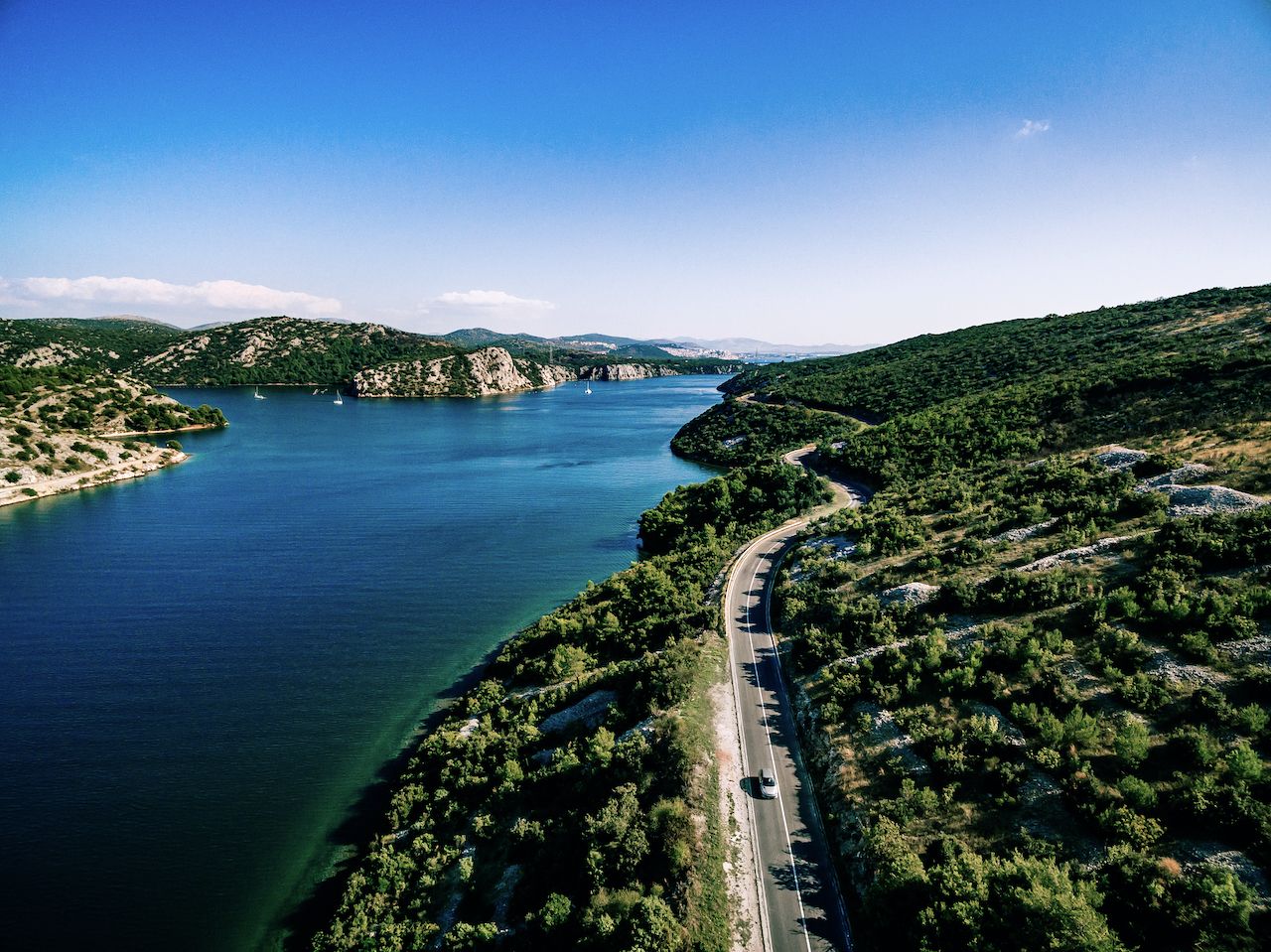 Panoramic as it is, the Croatian coast is also practically suited to road trips. The southern half follows the A1 highway, which conveniently connects the inland capital of Zagreb in the northeast to Dubrovik in the far south. Both cities have international airports and car-rental agencies like Hertz, Enterprise, and Sixt. The majority of the rentals in Croatia will be manual, however, so you’ll want to book well in advance if you need an automatic car.

North of Zadar, you’ll want to deviate from the A1 to experience the Istrian Peninsula. Fortunately, no matter where you’re driving in Croatia, you can expect well-maintained roads and minor to moderate traffic, depending on the time of year. Do note that the highway upkeep is largely explained by tolls, so it’s helpful to have cash on hand.

As for when to visit, the shoulder months of May and September are ideal, with the latter taking the slight edge for island-hoppers due to the seasonal ferry schedule. The weather is slightly less predictable outside of the peak summer months of June through August, averaging in the 70s rather than the 80s, though a later or earlier trip will also avoid any scorching summer heatwaves. Crowds are also thinner, prices lower, and traffic lighter outside of peak season.

The following route starts in Zagreb and ends in Dubrovnik but can also be driven in reverse. As much as we love Zagreb, this itinerary is all about the coast, so it only makes the list as a transit hub, though you could easily spend a few days exploring the capital on either end of your road trip. How long you spend in Croatia total depends on how much time you have. For the trip outlined below, we’d recommend 10-14 days to spend a few nights at each stop.

Zagreb to the Istrian Peninsula 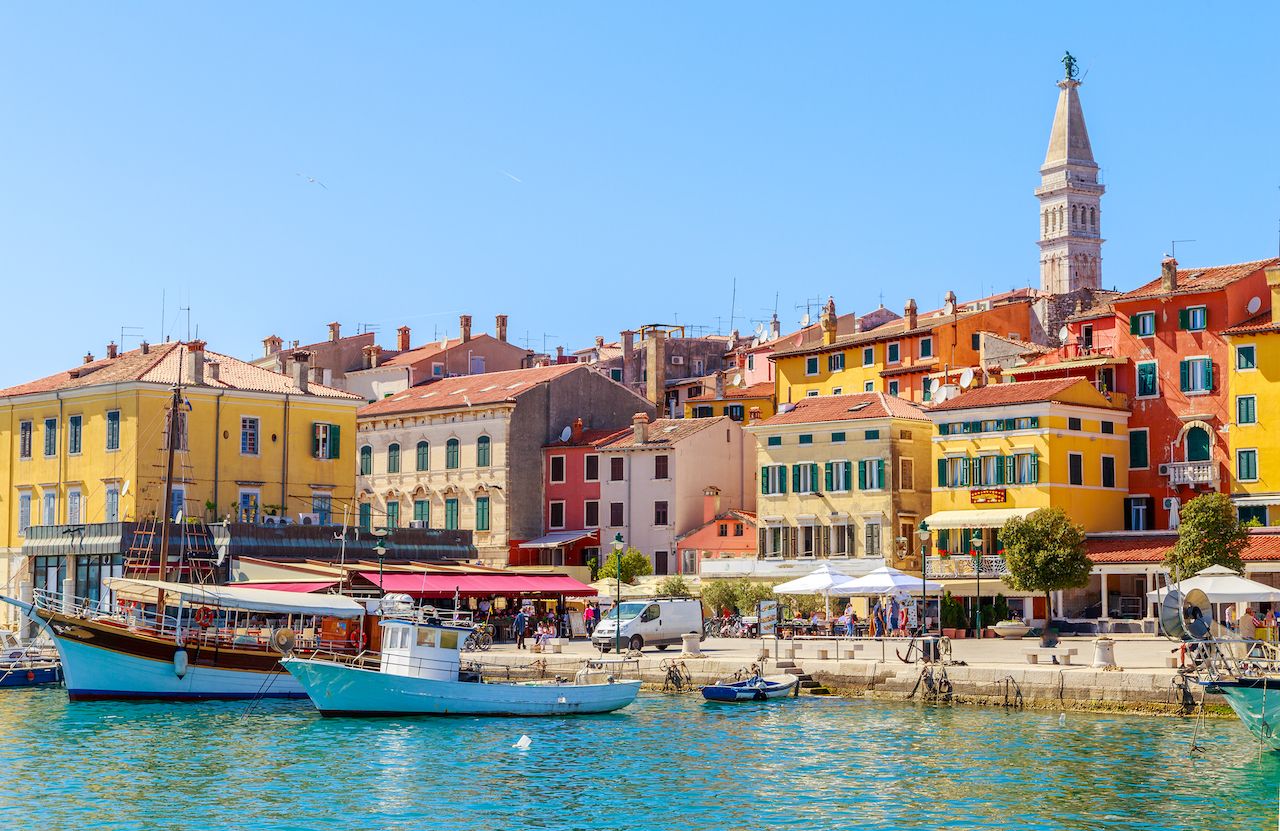 West of Zagreb on the northern end of Croatia’s coast is the Istrian Peninsula. Italy and Slovenia technically share custody of Istria, but roughly 90 percent of the peninsula falls within Croatia. And while the larger of its seaside towns are no stranger to tourism, none see quite the international crush that descends on the Dalmatian Coast during summer.

Centrally located Rovinj is the obvious base, whether you take comfort in cities that have earned their place on the beaten path or want a crash pad with easy access to the peninsula’s less touristy towns. Its 20-plus-islet archipelago helps sell Rovinj, too. Also worth considering as your Istrian home base are Poreč, a popular and party-friendly resort, and Pula, which is known for its grand Roman amphitheater and is a gateway to the remote Brijuni Islands. Smaller cities like Vrsar, Umag, and Novigrad are must-do day trips.

Wherever you end up on the peninsula, expect beautiful if rocky beaches and a sumptuous cuisine that rests not only on seafood but also the finest olives and truffles. Head inland one afternoon, to enjoy hilltop villages with rich winemaking heritages to match.

Drive time: one to two hours 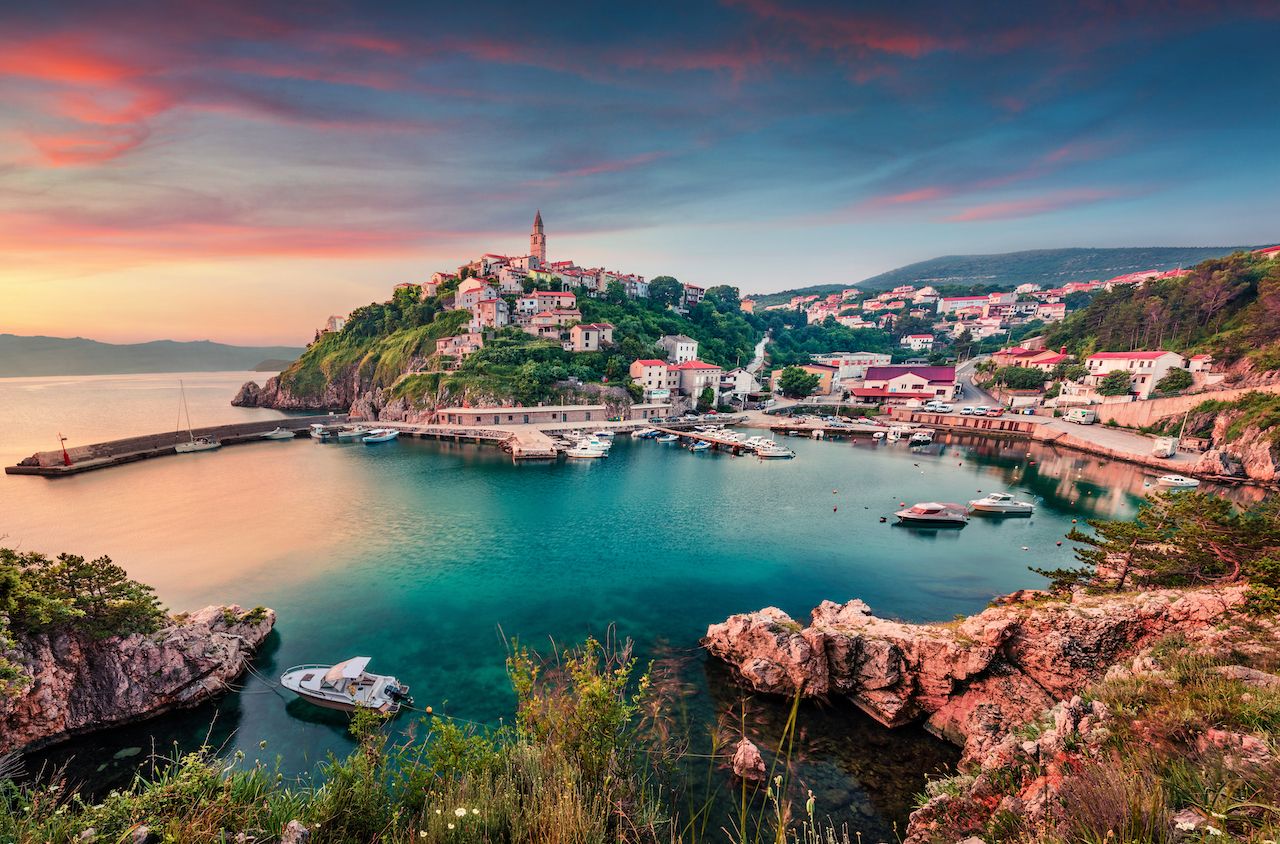 More commercial port than beach resort, Rijeka earns its spot on this itinerary for two simple reasons: It was named a European Capital of Culture in 2020, and it’s a gateway to the Kvarner Islands. After touring Rijeka’s main promenade and Habsburg-era architecture, including the 13th-century Trast Castle and 17th-century Cathedral of St. Vitus, road-trippers can use the city as a place to ditch their cars and hop on a Jadrolinija ferry to Rab Island. It’s a quick trip, under two hours, with a red-roofed old town and calm, swimmable bays on the other side.

Other highlights of the island cluster include lush, botanical Lošinj and forested Cres, not to mention Krk, the largest Adriatic island, which travelers can also fly into from the Rijeka airport. There, alongside yet another postcard-perfect old town, you’ll also find opportunities to wakeboard or water ski. Take your time exploring the Kvarner Gulf before returning to the mainland. Due for a major tourism boom, many of the islands here are still quiet and untrafficked, unlike the hot spots off the Dalmatian Coast. 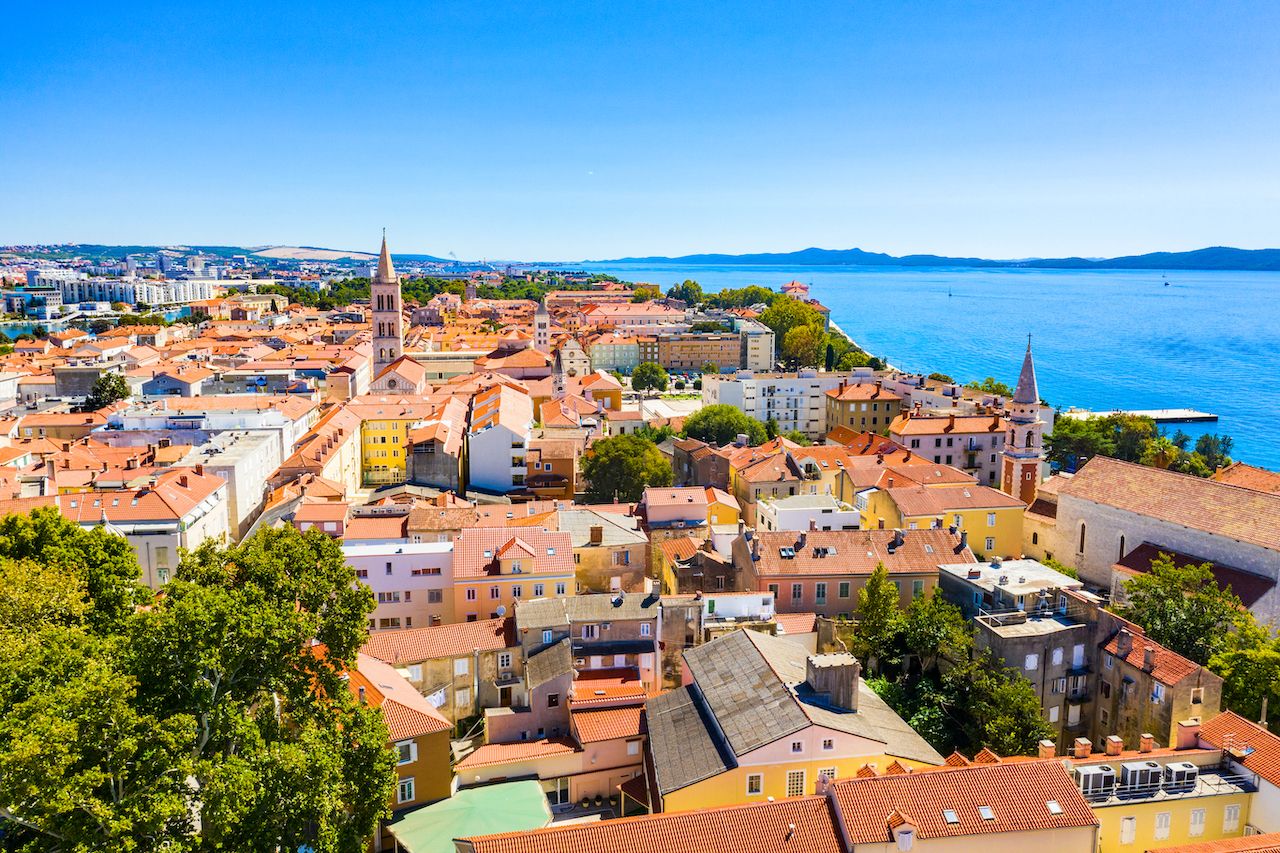 Increasingly popular among digital nomads and resourceful travelers, Zadar is quickly joining cities like Dubrovnik and Split as a must-see destination on the Croatian coast. Not so quickly that it’s inundated during peak season, however. Complete with the historic architecture, cafe-lined waterfront, and sea views that make many of Croatia’s coastal cities worth a visit, Zadar also has a few charms unto itself, notably the ocean-powered Sea Organ and solar-powered Sun Salutation, whose glass panels not only make an artwork out of pavement but also create electricity that helps power the waterfront.

Many visitors to Zadar tack on day trips to Plitvice Lakes National Park, located roughly an hour and a half northeast. To keep your visit coastal, however, schedule stops in stone-built Šibenik an hour south and Krka National Park’s waterfalls just east of there on your way out of the city. It’s a perfect side trip en route to Split. 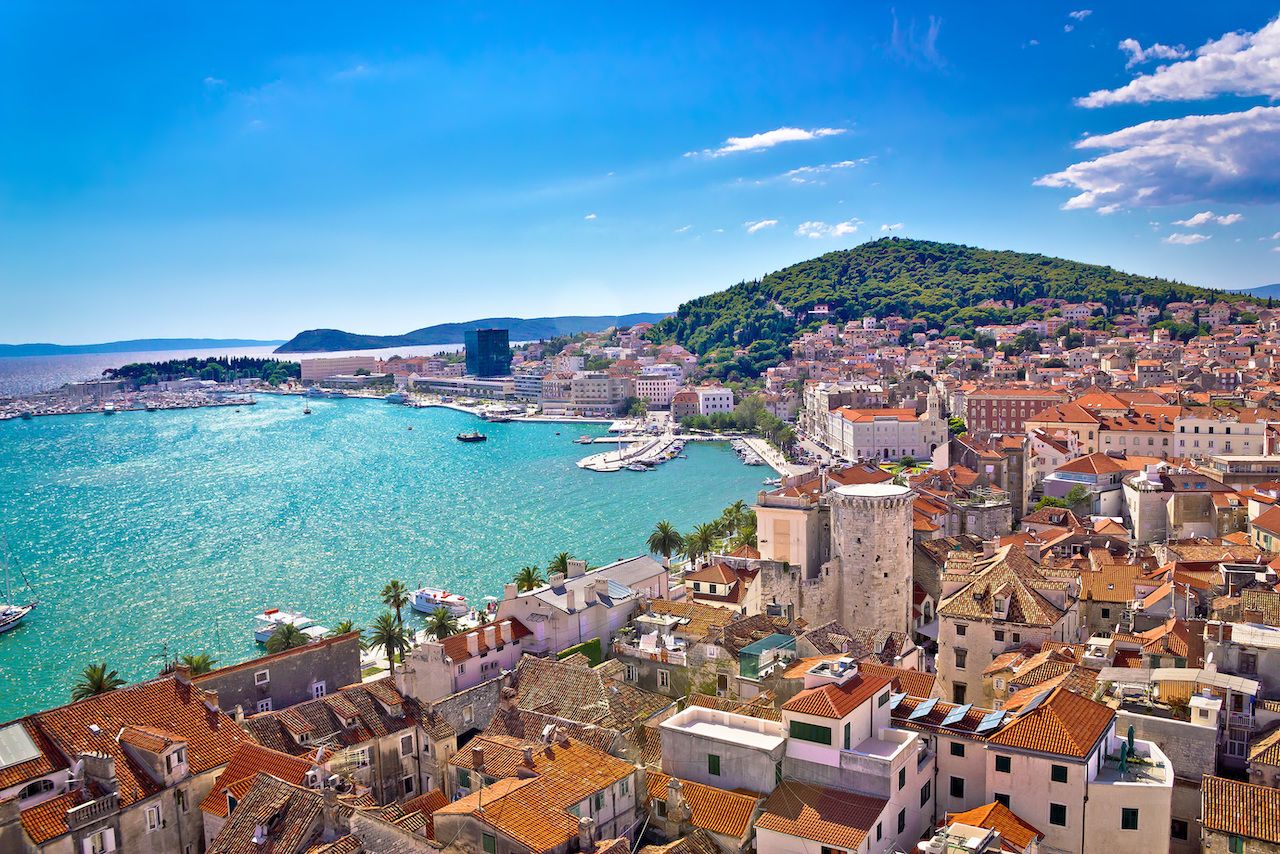 The second largest city in Croatia, Split feels like a few cities rolled into one, all folded on top of each other. At its core is the UNESCO-listed Diocletian’s Palace, whose ancient Roman walls now house bars and restaurants that spill out onto the main drag. It’s a grittier city than Dubrovnik, with modern developments surrounding the center that look older than the palace itself, yet is also coddled by both mountains and sea.

When the sun is out, locals and tourists crowd Bacvice Beach, while the outskirts of Marjan Forest Park offer mostly secluded swimming nooks if you know to go there. Island-hopping is a draw here, too, with big names like Hvar a quick ferry ride away. For something less boisterous, try Brač instead. There, you’ll find Zlatni Rat beach, whose distinct wishbone shape makes it one of the most beguiling beaches in the world. 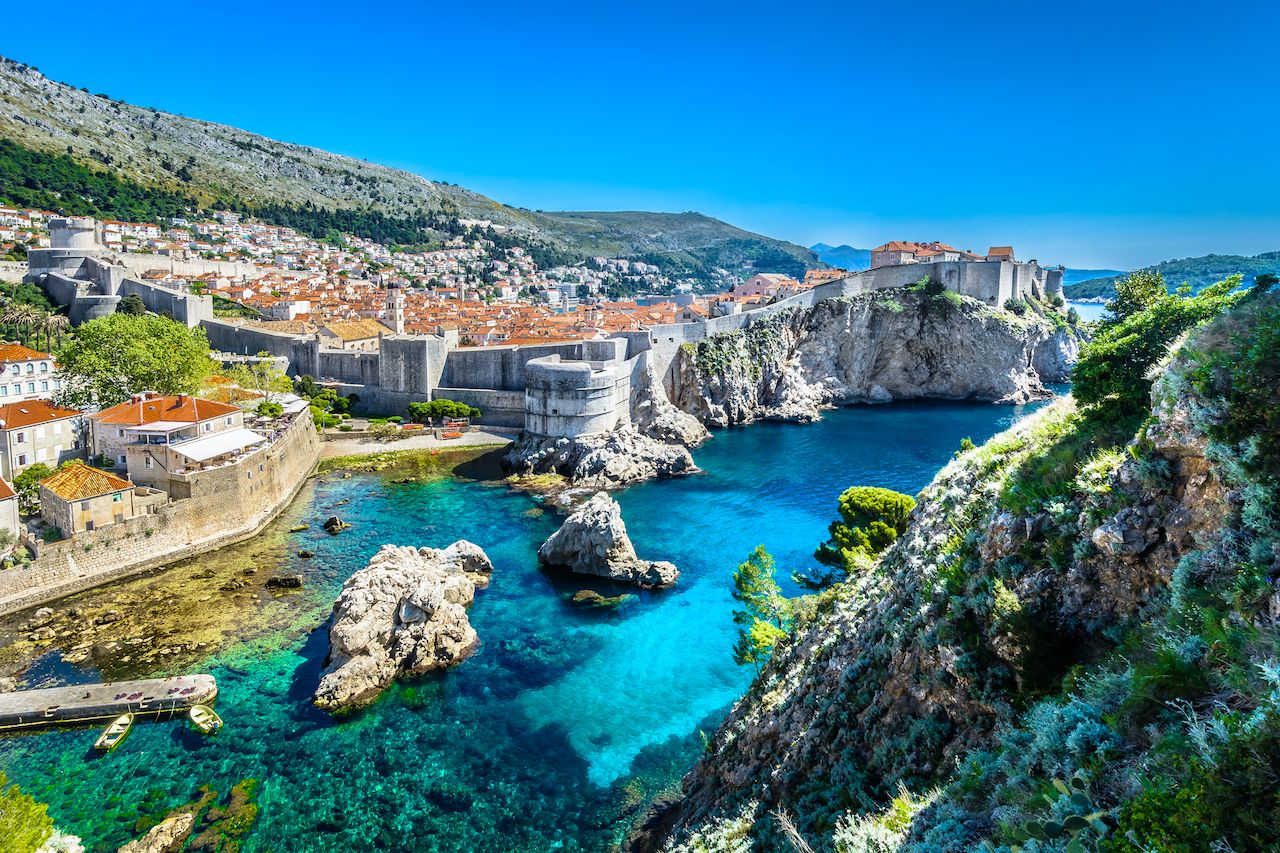 For some, a road trip down Croatia’s coast will be a means to ending up in Dubrovnik. Those travelers probably recognize city as the backdrop to some of the most striking scenes in Game of Thrones. Accordingly, Dubrovnik’s downside is the same as its appeal: Its walled inner city and cobbled limestone esplanade are so stunning that everyone wants to go.

While you’d be hard-pressed not to be awed, the tourist density can get draining, so be sure to budget time outside the historic center. On the drive from Split, stop in towns like Brela and Makarska for a cursory breath of fresh air. Once in Dubrovnik, islands like Lokum and Lopud are something of a respite despite their popularity, as is the city’s overlooking Mount Srđ. Further northwest, Mljet island and its accompanying national park are an even better escape.

Beaches and IslandsThe 4 Croatian Islands You Have To Visit This Summer
Tagged
Road Trips Croatia
What did you think of this story?
Meh
Good
Awesome