If Croatia’s coast was a little less perfect, Zagreb might be a pretty cool city.

Scratch that. Zagreb is a cool city, with that familiar European charm travelers are always after but a candid, sometimes cheeky, attitude that’s entirely its own. And were it not for Croatia’s flawless Adriatic islands, more travelers might actually know that.

Zagreb is the rare European capital that’s not the first place visitors think to go. It’s not even in the top five. But what island-hoppers working their way down the Dalmation Coast miss when they skip Zagreb is a laid-back city of loveable quirks, where travelers are welcome but never treated like tourists.

You may not leave with a dewy tan. Instead, you might come back with a taste for štrukli, the city’s favorite cottage-cheese-filled pastry, or become a walking encyclopedia on Nikola Tesla, who you’ll often be reminded was born in modern-day Croatia. One thing is certain: You’ll leave the city charmed by its idiosyncrasies.

If you’re considering a trip to Croatia, avoid the mistake of relegating Zagreb to an afterthought. These are all the weird, wonderful, and delicious things you’ll miss if you do.

1. Coffee and the cafe culture 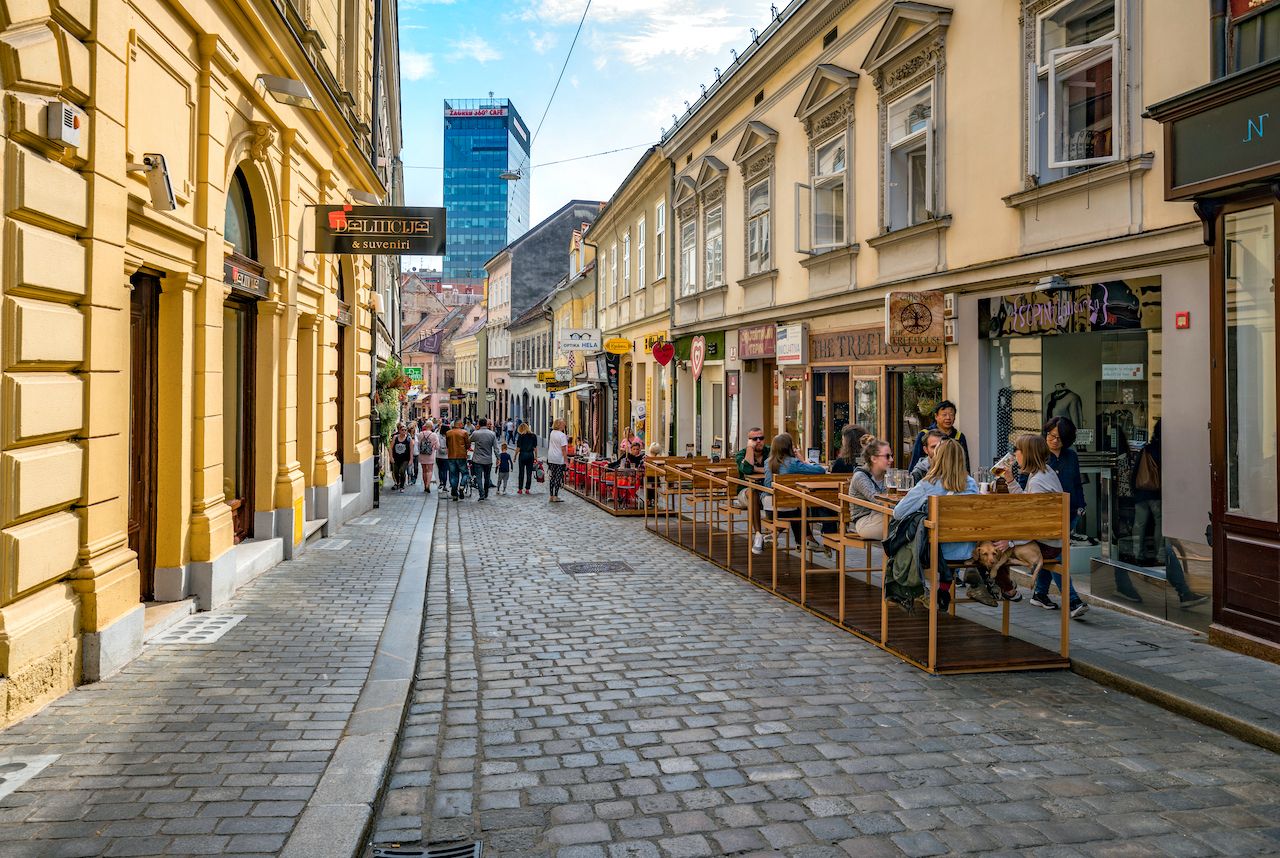 Croatia’s fondness for coffee is not actually about the coffee. In truth, the quality is hit or miss in Zagreb, where cafe-goers order Italian espressos but likely brew Turkish coffee at home. (Viennese coffee houses also influenced the city’s cafe scene.)

Rather than the drink itself, it’s the ritual of having coffee — slowly and with loved ones — that sustains Croatia’s cafe culture. Coffee dates rarely last less than a few hours. Getting coffee is the default social interaction, an excuse to gossip, talk politics, handle business, or share good news. One coffee might turn into several, happy hour, or a meal. Others might skip the coffee — but never the cafe.

Zagreb itself is practically an open-air cafe. On sunny days, coffee-drinkers congregate beneath umbrellas on the pedestrianized Bogovićeva and Tkalčićeva Streets. Saturday morning is a sacred day for cafe visits: A weekly ritual called špica brings everyone outside to sip espresso, people-watch, and maybe squeeze in some errands, often while dressed in their Sunday best.

While patrons create the atmosphere at Zagreb’s more generic cafes, others have cultivated ambiances on par with Europe’s cutest coffee shops. The opulent Velvet Café has been called an artist haunt, with a garden patio, digital library for readers, and excellent pastries. When in doubt, look for a Leggiero Bar, which has multiple locations and a spotless reputation.

2. A lesson in architecture 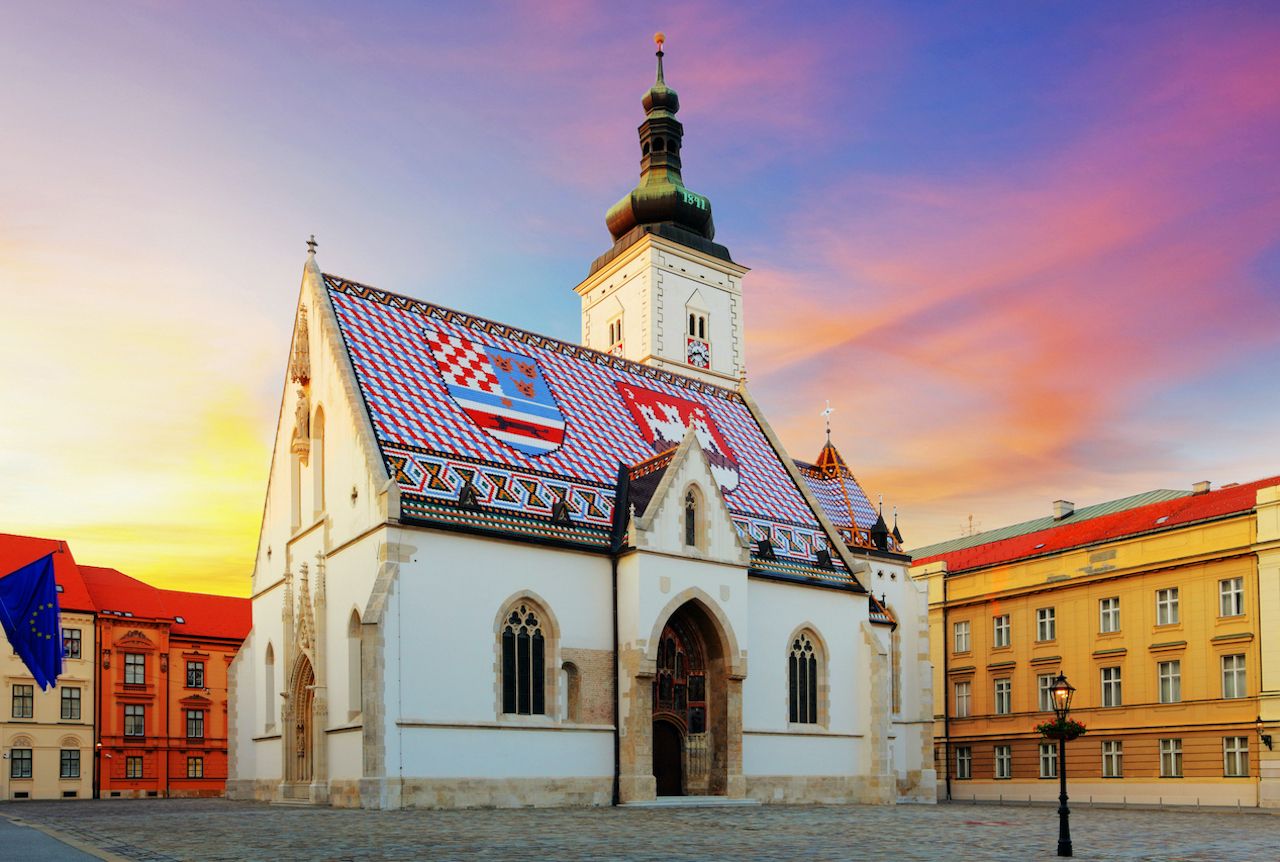 A walking tour of Zagreb is a crash course in European architecture. Educated eyes will recognize a textbook worth of styles: Gothic, Neo-Gothic, Romanesque, Baroque, Neo-Baroque, and Vienna Secessionist to name a few.

Upper Town is Zagreb’s historic center, where shops and restaurants fill in the gaps between landmarks, and every few buildings there is one painted a bold orange, yellow, pink, or green. The 13th-century St. Mark’s Church is one of the city’s oldest and most intriguing landmarks. Its red, blue, and white tile roof, added in the 19th century, proudly displays two coats of arms: one for Zagreb and one for Croatia, Dalmatia, and Slavonia.

Zagreb’s largest farmer’s and flea market, the open-air Dolac Market, sits between Upper and Lower Town. There, shoppers pick through produce in view of the Zagreb Cathedral’s towering Neo-Gothic spires. Dating to the 11th century, this is the city’s crowning architectural landmark.

Left to wander, travelers will easily find others, like Ban Josip Jelačić Square and the Croatian National Theatre. Just outside of town, the Mirogoj Cemetery is worth coordinating a ride to see. Designed by Hermann Bollé, the architect in charge of renovating the Zagreb Cathedral in the late 1800s, it’s been called the grandest cemetery in the world. 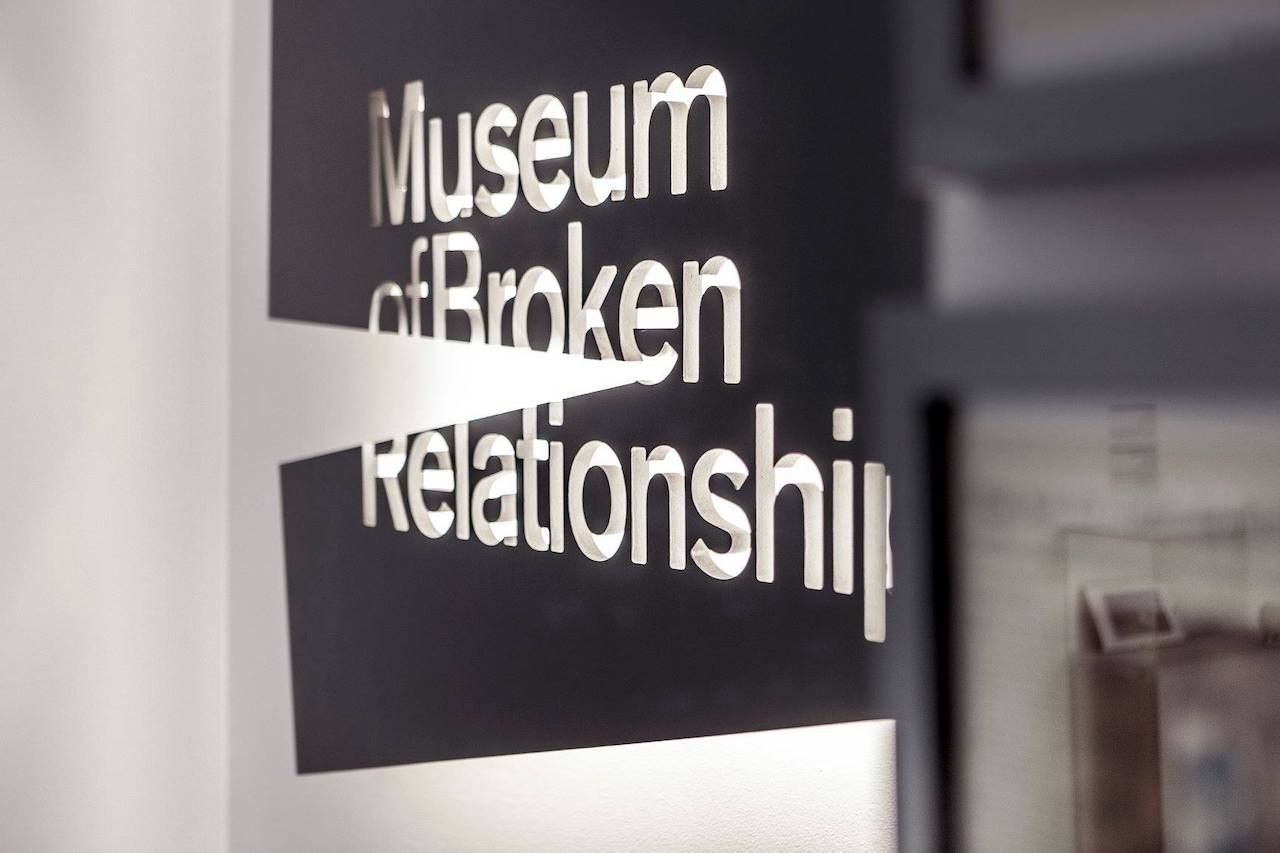 Nowhere is Zagreb’s quirkiness more evident than in its museums. One, in particular, has attracted a cult following: the Museum of Broken Relationships. Ex-lovers Olinka Vištica and Dražen Grubišić founded the museum, which began as a modest collection of everyday items that told stories of heartbreak. Now one of Upper Town’s most popular attractions, the museum has also staged exhibits from New York City to London to Tokyo. A second permanent outpost was established on Hollywood Boulevard in Los Angeles in 2016.

Joining the Museum of Broken Relationships are niche museums like the Zagreb 80s Museum, Museum of Illusions, Torture Museum, Chocolate Museum, and Museum of War Photography. Visitors would be remiss to skip the Technical Museum of Nikola Tesla, which displays an impressive collection of automobiles and aircraft, engines and motors, and even patents for Tesla’s many inventions. There’s also a planetarium that puts on a good show.

4. The most important meal of the day 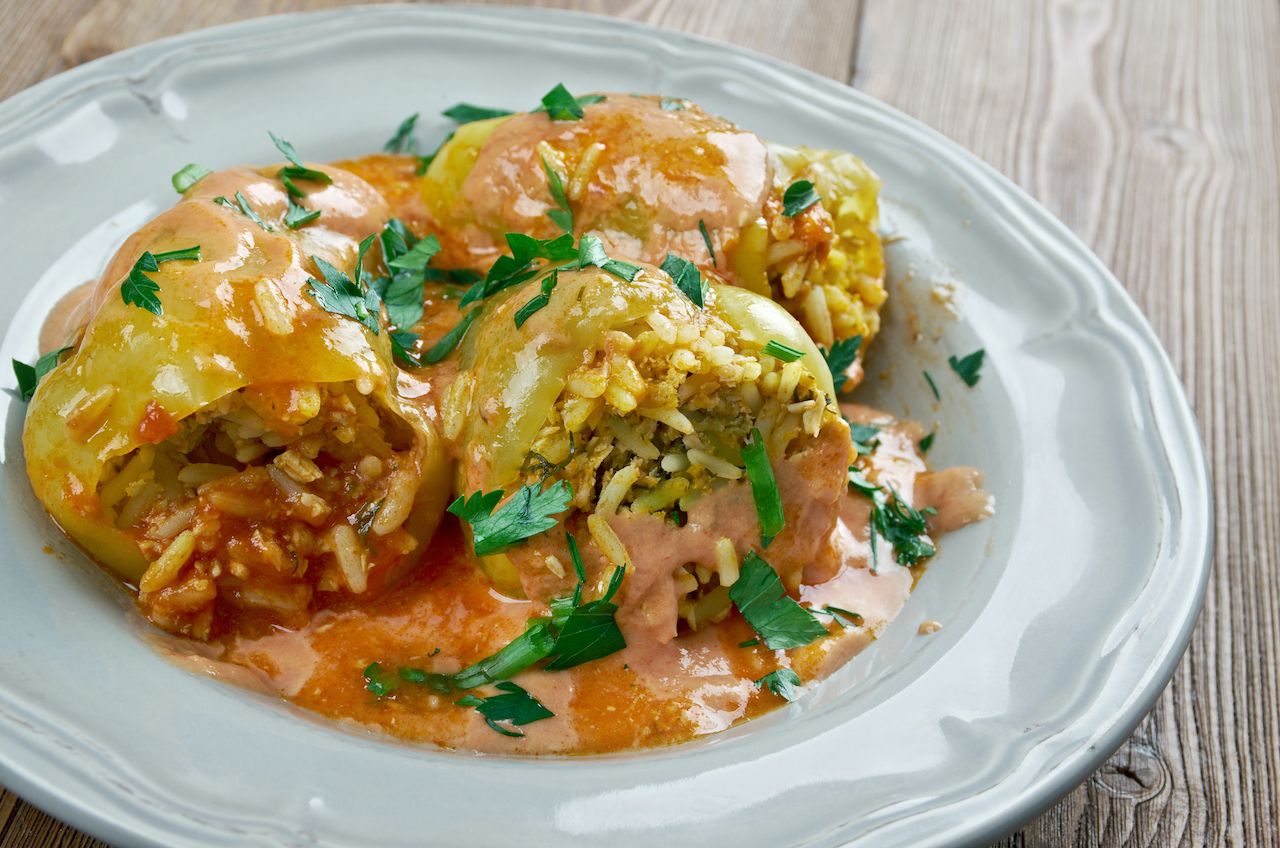 Despite the adage Americans grow up hearing, in Croatia, breakfast is not the most important meal of the day. That distinction goes to gablec, a late-morning meal that doubles as a sacred social ritual, sort of like brunch. Outside of Zagreb, along the coast, you’ll hear this meal referred to as marenda.

The tradition originated among workers, who would break for a snack around 11:00 AM. Though older generations may say that the art of the gablec is dying out, bistros throughout Zagreb still offer daily gablec specials. Vallis Aurea and Stari Fijaker are two legendary, central spots. Bicko, outside the center, also serves up gablec that’s as comforting as a homemade meal.

Expect meat-heavy dishes like goulash, tripe, cabbage rolls, veal steaks, faširanci patties, and punjene paprike, which are bell peppers stuffed with meat and rice then stewed in tomato sauce. Seafood is less of a staple in Zagreb than on the coast, though it’s commonly served on Fridays. You might see cod, calamari, or hake prepared like they do on the Dalmatian Coast.

On the coast, marenda is typically served with watered-down wine. It’s perfectly acceptable to pair wine with gablec in Zagreb though it’s not essential to the meal. Eaters might also sip a gemišt or špricer, which are similar to white wine spritzers.

5. Cheers to the beers 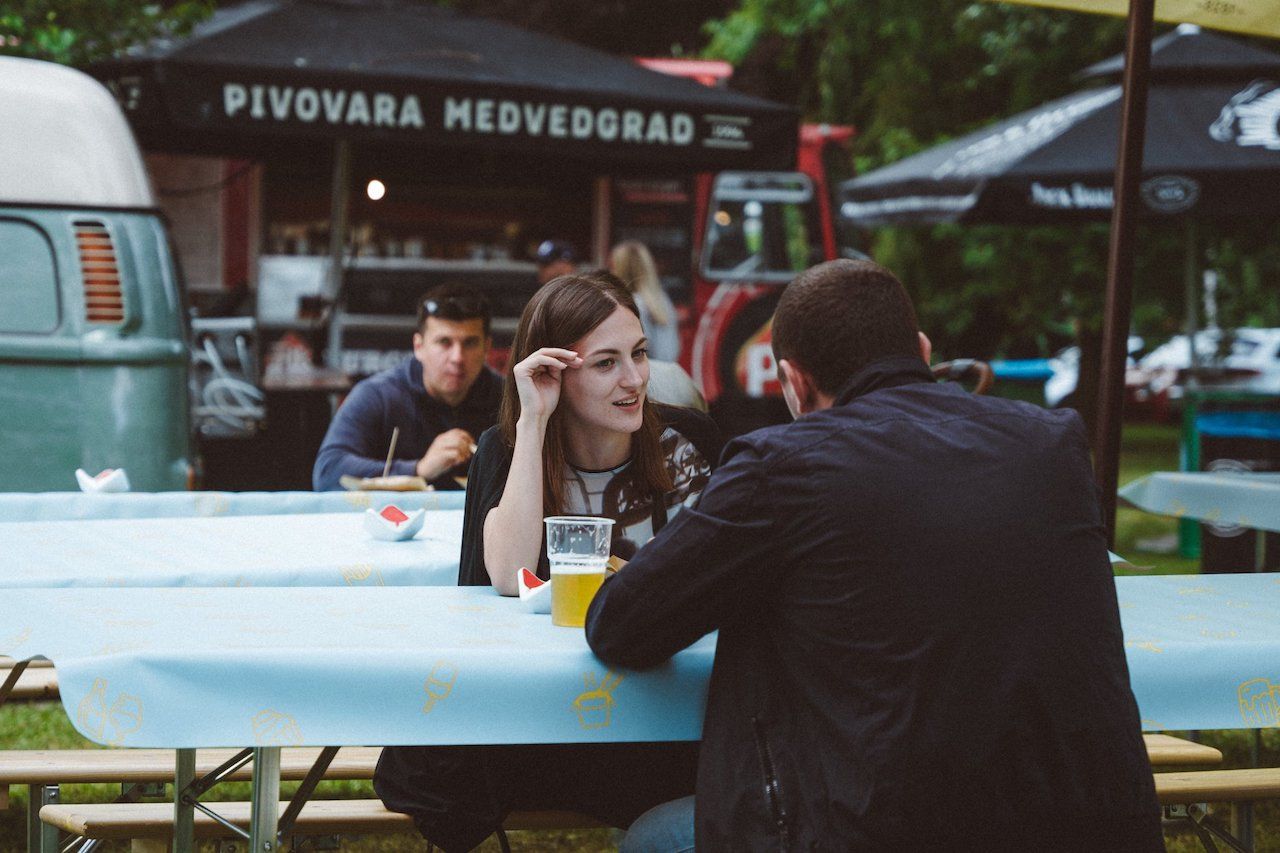 Croatia’s wine culture is well-established. Dozens of grape varieties grow throughout the country, most notably zinfandel. Less known is the thriving craft beer scene, which is growing fast in Zagreb. Microbrewers are cropping up around the country to brew IPAs, APAs, lagers, stouts, porters, sours, and other styles to round out local beer lists.

Medvedgrad is a pioneering craft brewery that’s been perfecting its beers for more than 20 years. Travelers can sample its creations at the Mali Medo pub on Tkalčićeva Street, which now has a beer garden that can accommodate more than 400 guests. Elsewhere, keep an eye out for bottles of Zmajska’s IPA, one of the first brews to bring bold hops onto the scene, and look out for Nova Runda’s signature cans. The Craft Room near Ribnjak, Zagreb’s art park, is a safe bet for tastings with roughly a dozen beers on tap.

Visit in May and you’ll overlap with the Zagreb Beer Fest. It’s more of an open-air music festival that monopolizes the streets of Zagreb for four days each year, but it does run on beer provided by both big-name breweries and up-and-coming microbreweries. And it’s free. 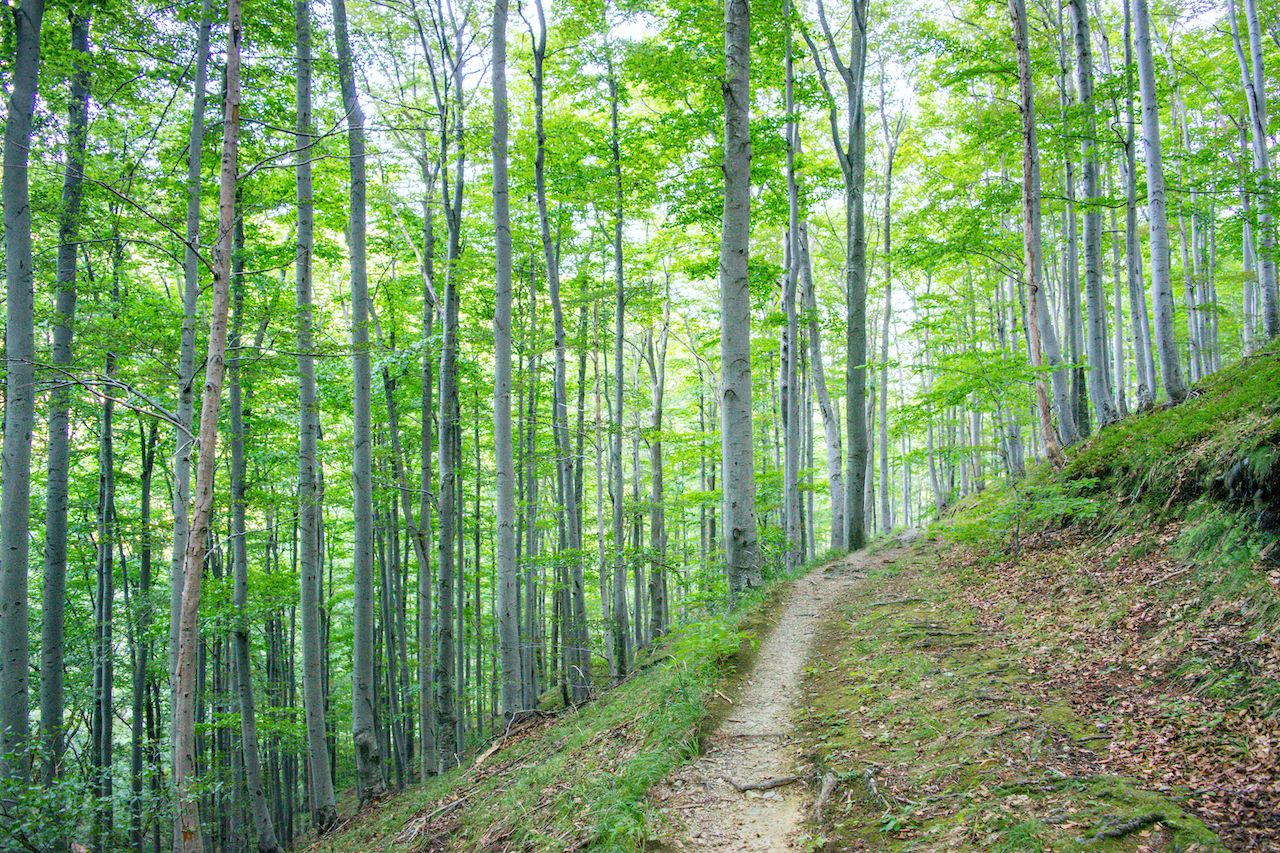 Travelers tend to overlook Zagreb because it’s inland, roughly two hours from the coast by car. In doing so, they also overlook Zagreb’s scenic draws, including nearby beachy areas.

The famous Mount Medvednica is located just north of the city. It’s a 45-minute drive but is also accessible by bus or tram. Sljeme, the tallest peak, rises roughly 3,400 feet and plays host to the most popular hiking trails. Take the 140 bus to get there, or ride tram eight or 14 all the way to the end, then switch to tram 15 to wind up in Dolje.

The hike to the top of Sljeme is moderately strenuous, but efforts are rewarded with great views and mountain lodges where you can refuel. For something gentler, try the woodsy, meandering Leustek trail. In total there are 70 hiking and cycling trails spread throughout Medvednica Nature Park, where you’ll also see caves, creeks, mines, and medieval historic sites.

If too long in the city starts making you wish you had hit the coast, Zagreb has an answer for that, too: Lake Jarun. It’s easy to reach via trams 17 and 5 during the day and tram 34 in the evening. Signs for the lake are clearly marked at the Jarun stop. There, you can swim, canoe, windsurf, stick to the beach areas, or set off on a nature walk.

Jarun is a popular day trip, but tram 34 does operate for a reason. After sundown, the lakefront is a magnet for nightlife with some of the city’s best-known bars and clubs, many of which blast EDM all night long. Lake Jarun also hosts a massive music festival, INmusic, every June, bringing out big names like The Lumineers, Arctic Monkeys, and Beck.

Beaches and IslandsThe 4 Croatian Islands You Have To Visit This Summer
Tagged
Travel Zagreb, Croatia
What did you think of this story?
Meh
Good
Awesome

A Day in the Life of A Writer in Zagreb, Croatia