Photographs of travelers posing with wildlife on a trip to Thailand are often looked at in awe by friends and family back home. After all, it’s not every day that you get the chance to be in such close proximity to an exotic elephant or tiger. Regrettably, though, things are not always as they seem — it would be a divine miracle if you lived to tell the tale should you ever encounter a tiger in the wild. A lot has been made of these excursions over the last few years, including activists citing animal cruelty and making public stands against inhumane wildlife excursions. Today more than ever, it is vital that tourists are not visiting — and therefore not funding — the more sinister side of wildlife tourism in Thailand. It is totally possible to see these animals up close and in a secure and healthy environment. Here’s how to do it. 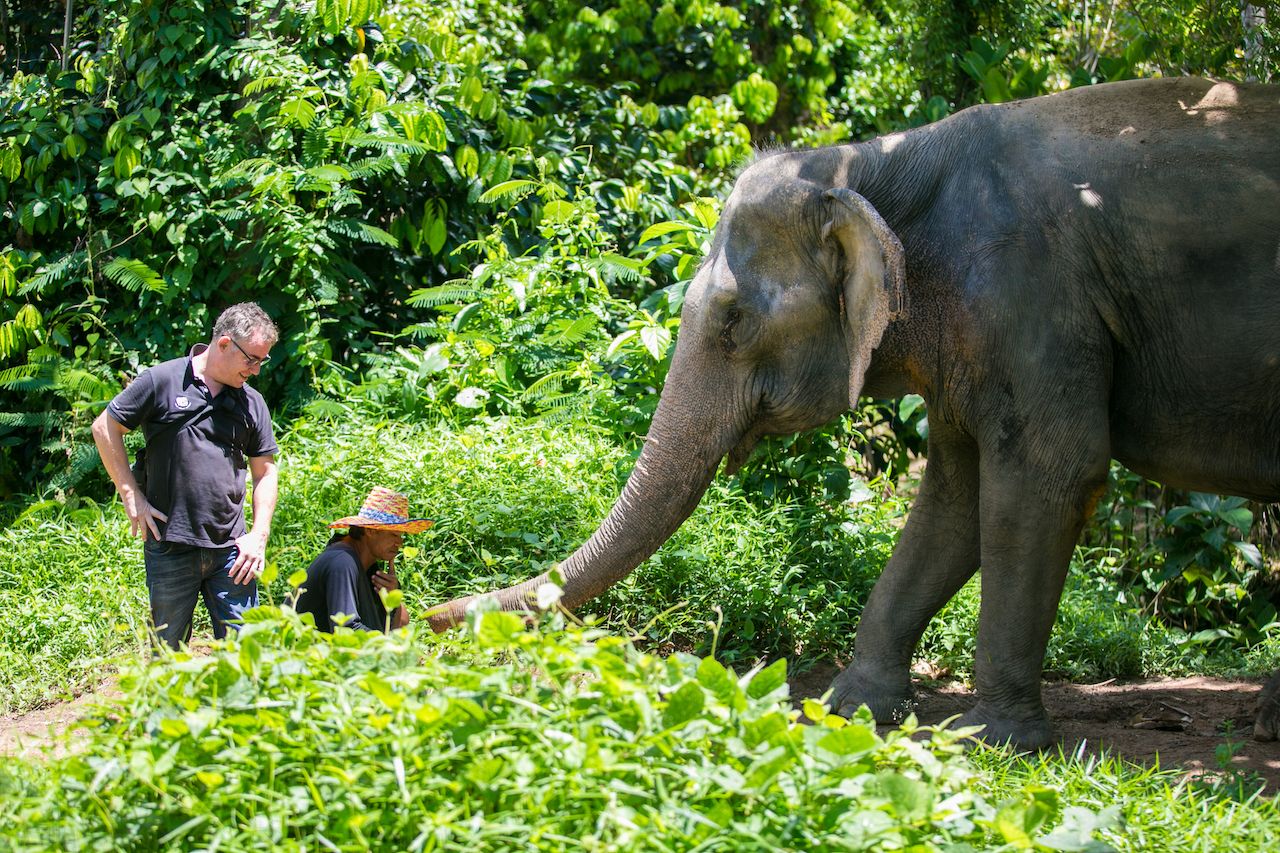 One needs only to look at how popular elephant riding excursions became to see how their owners are experts at marketing to tourists. What happened behind the scenes remained hidden, though in recent years — thanks in part to the efforts of conservationists and travel writers who took the time to look beyond the brochure — people have begun to realize how disgusting elephant riding is. Elephants do not naturally allow people to hop on their backs. The selling point was that elephant riding happens only if the animal allows, making the excursion sound exciting and somewhat humane and perhaps even an opportunity to form a friendship with a magnificent creature. In actuality, the elephants are forced into allowing visitors to ride them through tortured conditioning that begins early on in their life. This is called the phajaan (meaning “to crush”) process, seeking to crush the spirit of the animal.

Once this became common knowledge, many operations ceased and were replaced with Elephant sanctuaries marketed as a safe haven for formerly mistreated elephants. This is precisely why it is vital to do some research before taking part in any wildlife experience — visiting an elephant sanctuary is one thing. Sanctuaries where elephants can live and roam are your best option for viewing elephants in their natural habitat. Responsible Travel, a site that vets ethical travel experiences, cites several ethical elephant sanctuaries in Thailand, including Elephant Nature Park in Kuet Chang and Elephant Valley in Chang Rai. In Kanchanaburi, you can visit Elephants World and work with old and ill elephants who are allowed to roam freely in a protected environment. You’ll be able to provide genuine help and care, and while it is such a shame that their mistreatment has made this necessary, this is the harsh reality.

In general, beware of any that offer shows or activities specifically involving live elephants, and of course, don’t hop on top of one. When it comes to elephant riding, there is not an ethical option. 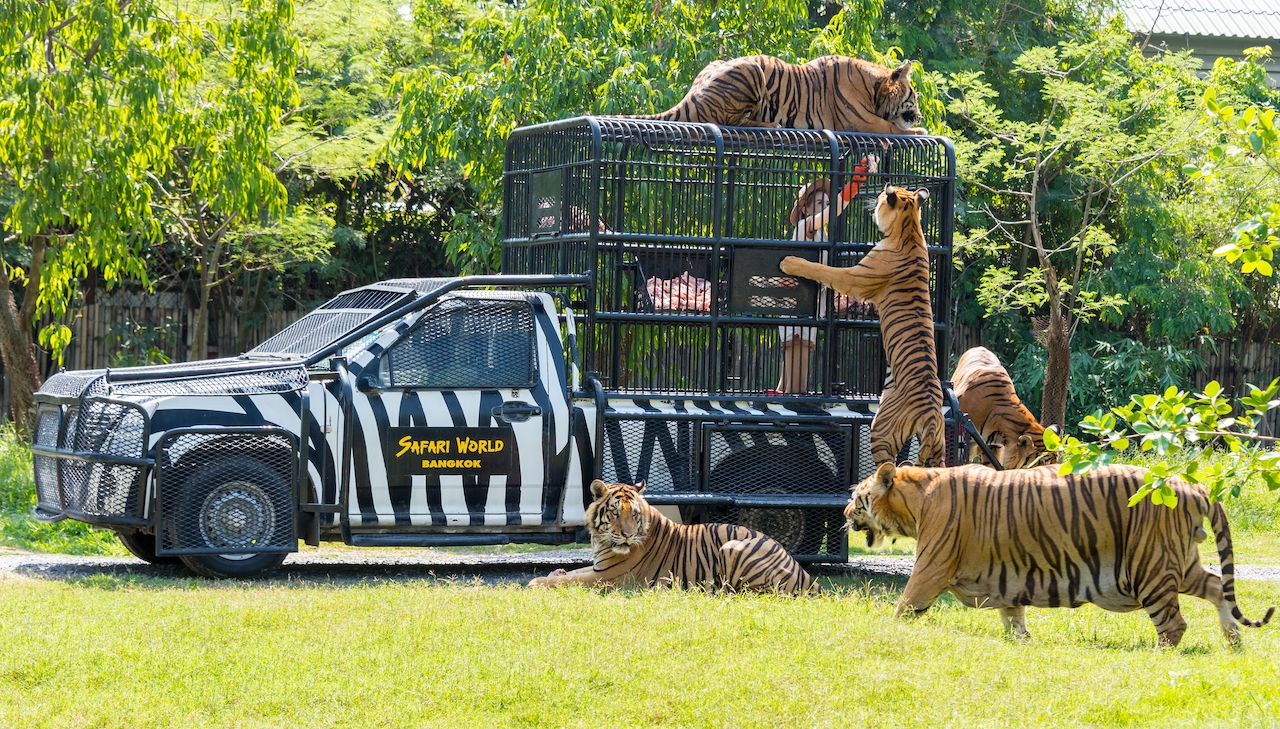 The case of Thailand’s tigers can be slightly more complex. Prior to being raided by the country’s Department of National Parks in 2016, the Tiger Temple in Kanchanaburi was marketed as the only place you could observe monks and tigers living side by side. For an extra fee, you could even feed the cubs and take the adults for walks. Speculation had circled surrounding how and why these wild animals knowingly allowed humans to touch and hug them, with suggestions that the tigers were under heavy sedation being a major concern. During a raid, 147 tigers were removed from the ‘temple,’ while the bodies of more than three dozen deceased tiger cubs were found in freezers across the property. Also discovered was jewelry made from tiger skins, which were given to tourists making an additional donation.

Tiger sedation has not been proven, and I struggle to believe that it was the case. Several years ago, I visited the Tiger Kingdom in the northern Thai city of Chiang Mai, keen to see what actually happened at these centers. Naturally, tigers are a sleepy animal. They sleep for up to 20 hours a day and do the majority of their hunting at night. Therefore, it is not unusual for them to be sleeping or lying about in the midday heat. What really convinced me that sedation was not in play, though, was how the tigers moved. They swept across the enclosure quickly and as powerfully as one might ordinarily expect a tiger to.

Whether or not the tigers were sedated, I still struggle to believe that these attractions are as ethical as they claim to be. There are a lot of questions still unanswered surrounding experiences with tigers in Thailand, none of which have been proven entirely ethical. Again, if the facility or sanctuary allows anything other than simply observing the animal in a natural habitat, you should stay away. 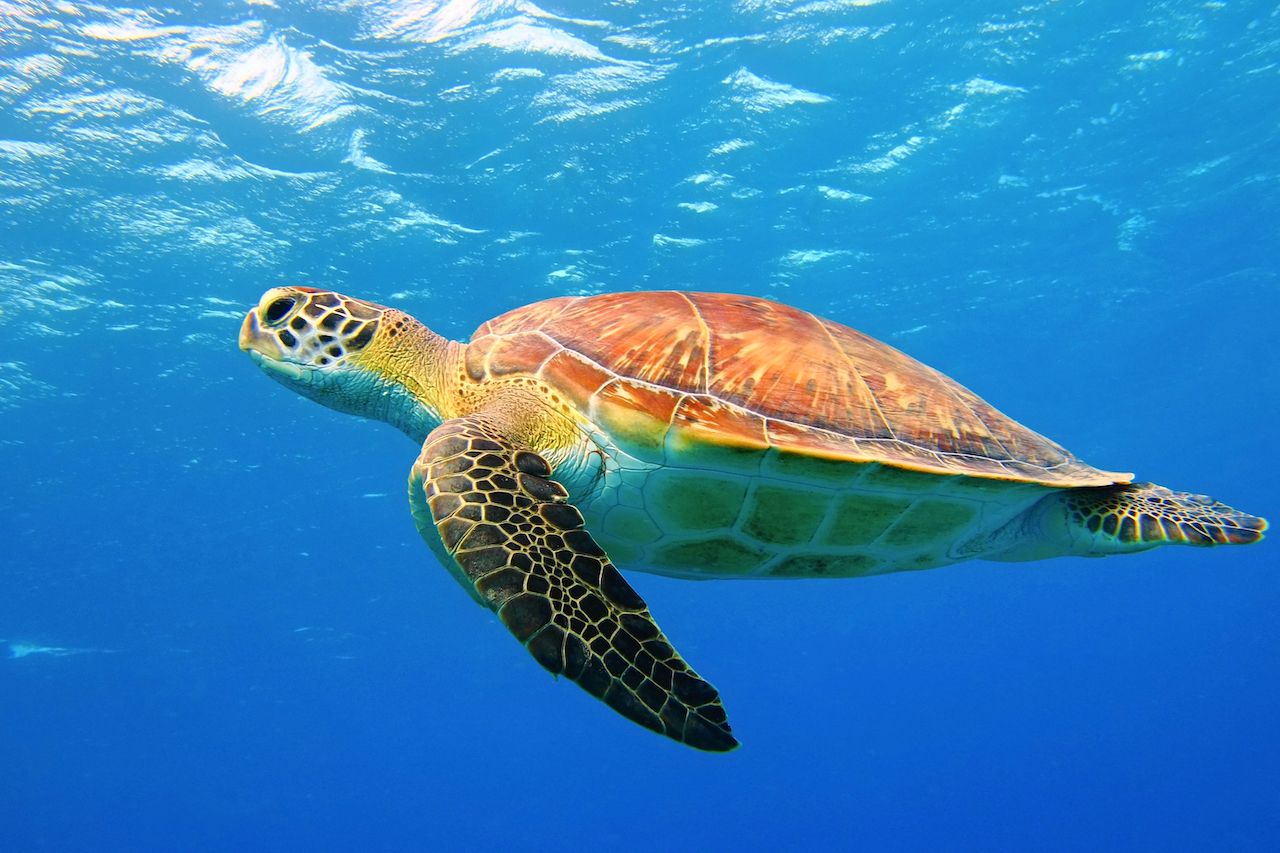 Despite the issues with elephant and tiger attractions, Thailand does offer wildlife experiences that haven’t lost their moral compass. A standout in ethical wildlife conservation is the Sea Turtle Project on the island of Koh Phra Thong. The organization works to protect natural habitats through beach cleaning efforts, like its 100 Turtles Marine Waste Project, and to improve nesting grounds for the turtles. It expands its effort to the community by involving local children and resident volunteers, and you can actually volunteer with them if you have some time to spend away from the more tourist-heavy parts of the country. 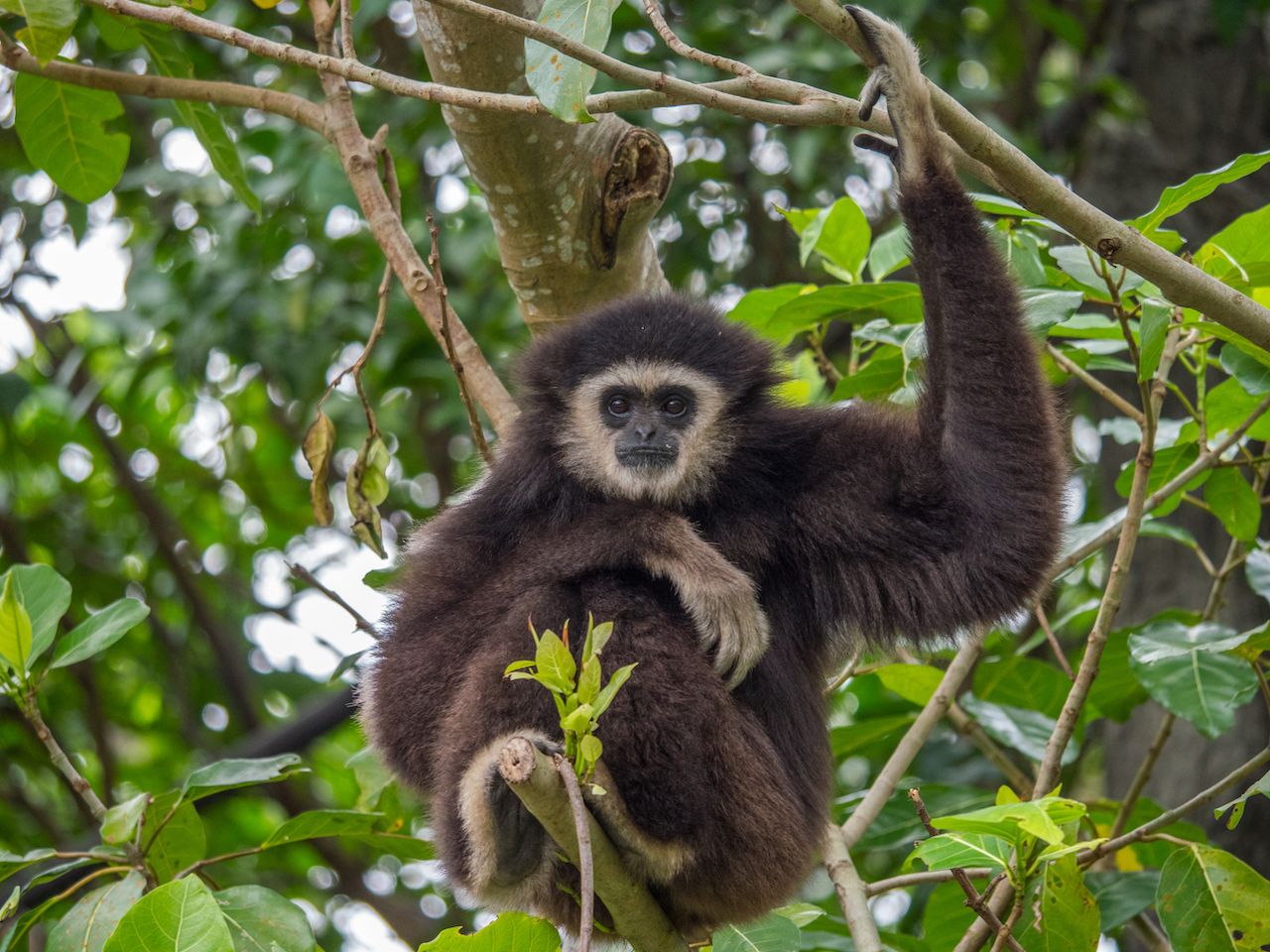 Gibbons — small apes common throughout much of Southeast Asia — have long been used and mistreated in the entertainment industry in Thailand. They are, in addition, at an increased risk from poachers and habitat loss. The Gibbon Rehabilitation Project rescues them, rehabilitates them, and releases them back into their natural habitat on Phuket, now a protected area where hunting is banned. The group relies on donations and dedicated volunteers who generously offer their time to work on the rehabilitation process. If you don’t have time to volunteer, the center will open for visitors on a daily basis to come and see the animals play. Like the Sea Turtle Project, working with the gibbons offers tourists the chance to do something really amazing and make an enormous difference in the process.

Your responsibility as a tourist 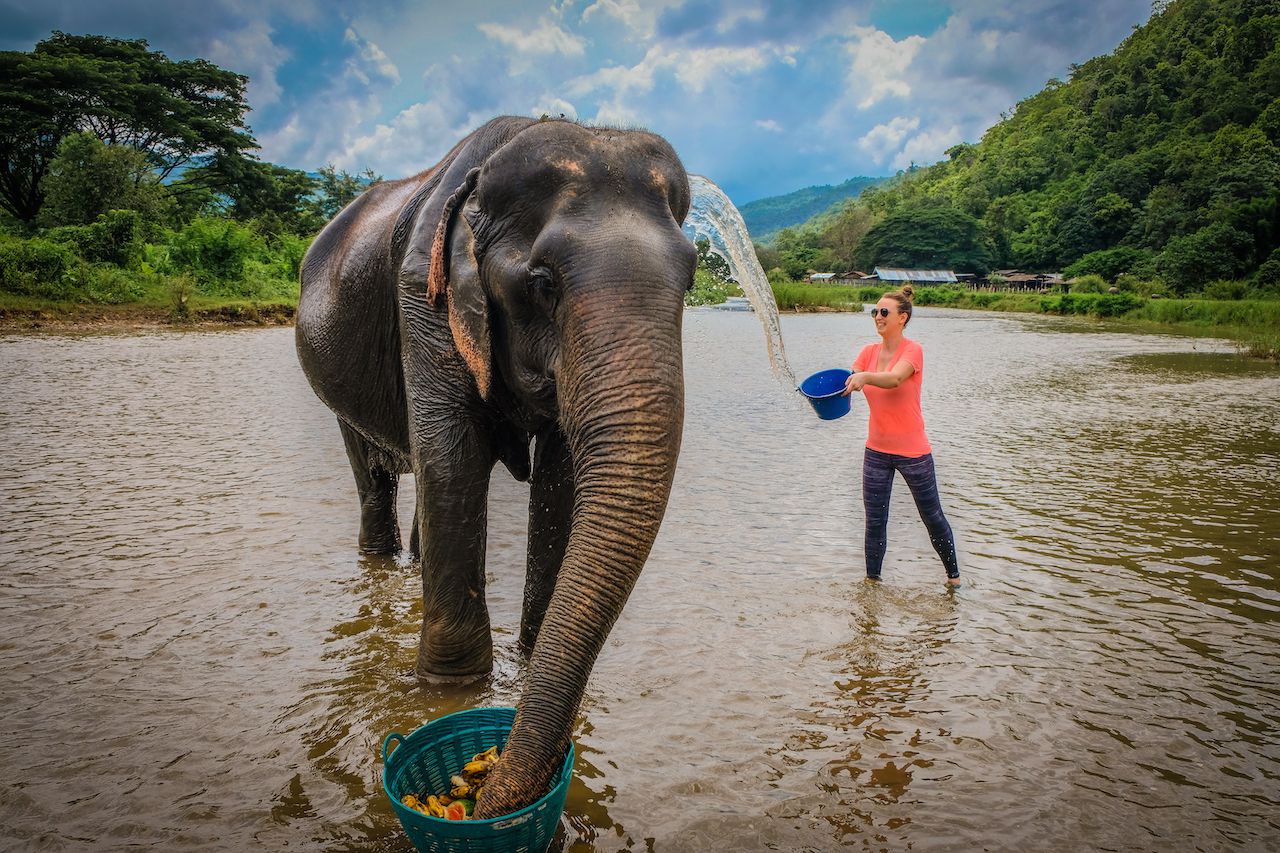 It comes as no surprise that in a region where wildlife is so prevalent, it is the animals who suffer as tourism increases. As tourists, we must take responsibility for our actions in the countries that we visit. What we might consider an amazing bucket list moment can have far deeper consequences for the chained up tigers and elephants wailing in pain as they undertake their fiftieth walk of the day. But there is hope. Given the growth in sanctuaries and higher percentage of visitor awareness, where we are now is far better than 10 years ago.

There will always be a gray area. These animals need caring for and need the tourist’s money to do so. Even though you might be funding a company that was once unethical, the animal’s welfare in this present day is what is important. Certain animals, like elephants and tigers, can never be returned to the wild. Go, see them and enjoy yourself. If at any time you feel they are being mistreated, document it, report it, and do whatever you can to improve their lives. In many cases, leaving an online review is a great start.