I stopped the van next to the road to stretch my legs when I saw it. There was a brown bear, sitting roughly 60 feet from me. I couldn’t believe my eyes at first, but after a few seconds, I realized the moment was real. The animal had fluffy round ears and looked cute enough to hug, but the sight of the huge claws and teeth when it yawned got me back in my car. I continued on my way and left it in peace.

I was driving the Transfăgărășan, which is, according to Top Gear, “the best road in the world.” It truly is spectacular, containing numerous hairpin bends and magnificent views of the road below that make you feel like you’re on a racetrack. It runs through the yellow mountains, though they looked almost golden in the October sun. 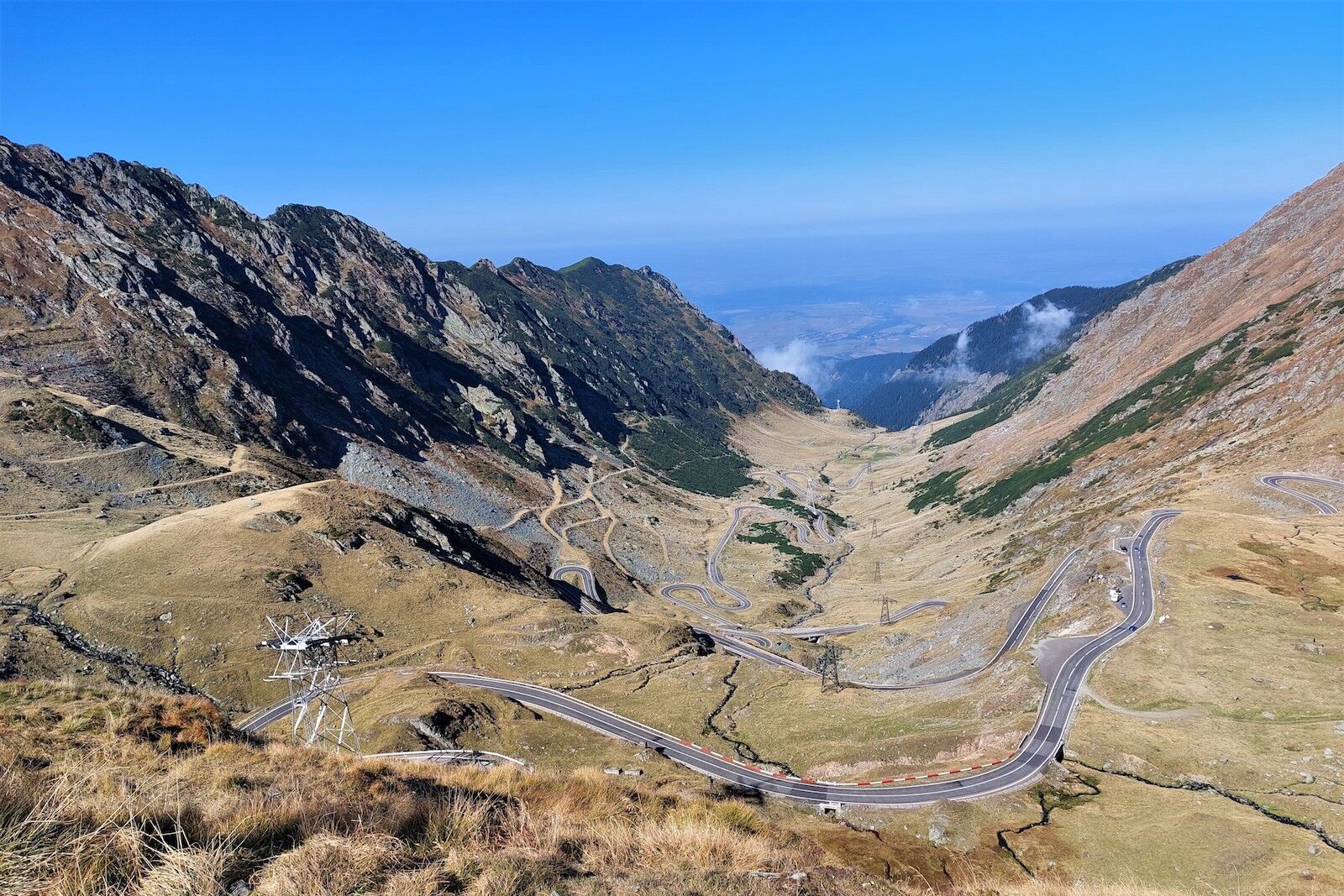 In the summer of 2021, I started traveling Europe with my boyfriend. We’re planning to spend the next year or so living in our van we converted — Ruby — and have been traveling around Europe already for several months. We started in the Netherlands, but last fall brought us to Romania, where we spent for all of October. Our primary goal for visiting was to drive the famous Transfăgărășan, though wildlife was also a major draw.

Romania is somewhat famous for its brown bears, which are the same species as grizzly bears. In fact, bears in Romania have made headlines, most recently for chasing a skier down a ski slope and a few recent bear attacks. However, bears don’t naturally see humans as a food source, and any association they have between food and humans is almost always a result of poor behavior from people (like leaving food out or encroaching too closely to dens).

Bears along the Transfăgărășan and near Piatra Craiului National Park 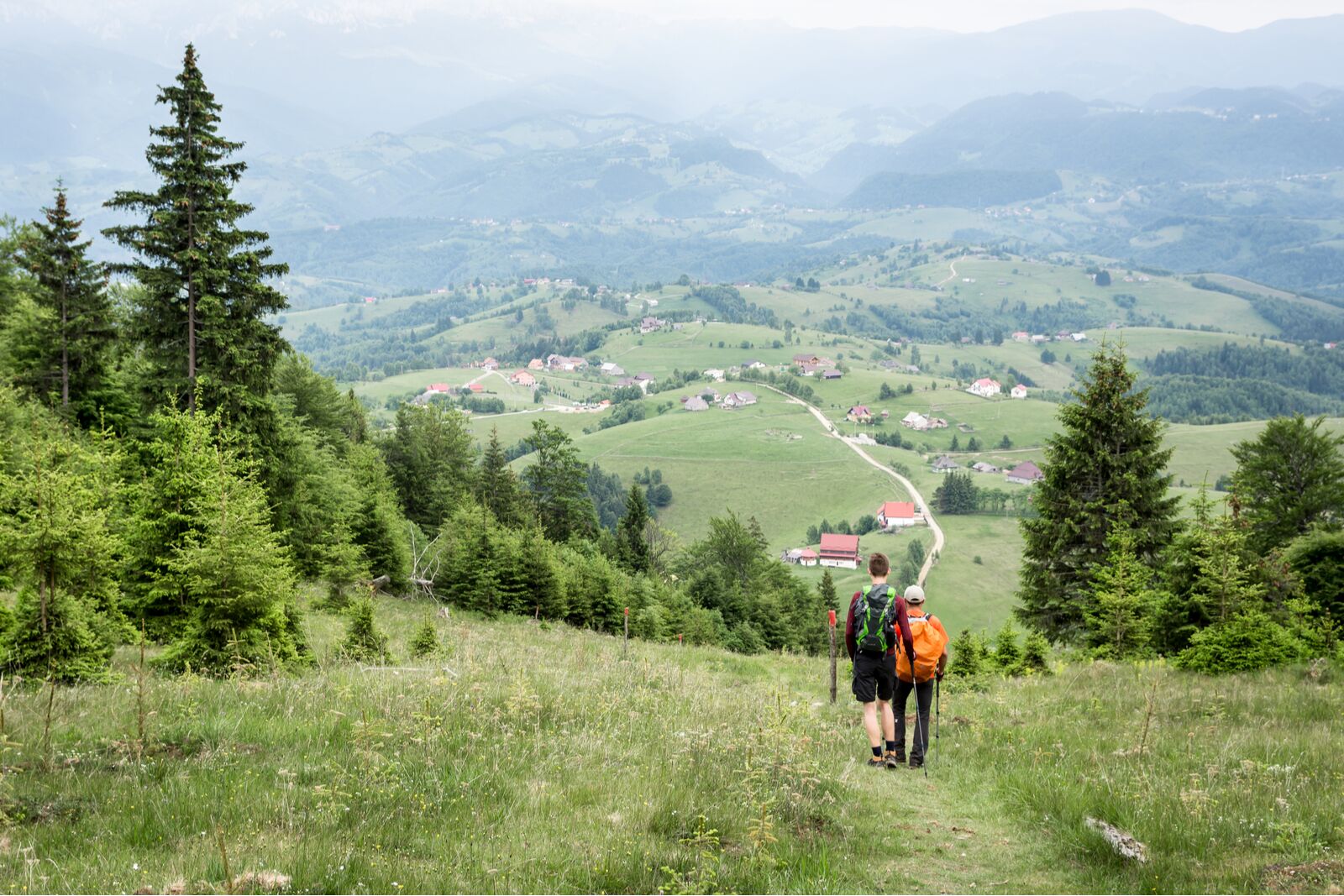 >The country has 14 national parks, but the most well-known for spotting bears in Romania (and perhaps the most well-known overall) is Piatra Craiului National Park, a 90,000-acre park in the Carpathian Mountains. It has dozens of hiking trails and plenty of cabins, hotels, and backcountry shelters in the surrounding towns and woods. It’s popular for both day hiking and overnight trips and connects to the parts of the Carpathian mountain range that spread into other countries like the Czech Republic, Serbia, and Ukraine.  It’s one of Europe’s most well-known parks for wildlife and outdoor getaways.

The park is a short drive from the town of Brașov, a medieval town surrounded by forested mountains. The small city is lively and frequently welcomes tourists, but it hasn’t lost its traditional atmosphere. It’s partially surrounded by ancient walls and the city center is a huge town square framed by terraces and restaurants. The town has cute shops and small restaurants, making it a great place to stay for a few days. Many tours through the park leave from Brașov, and it’s only 2.5 hours by train from Bucharest, Romania’s capital. 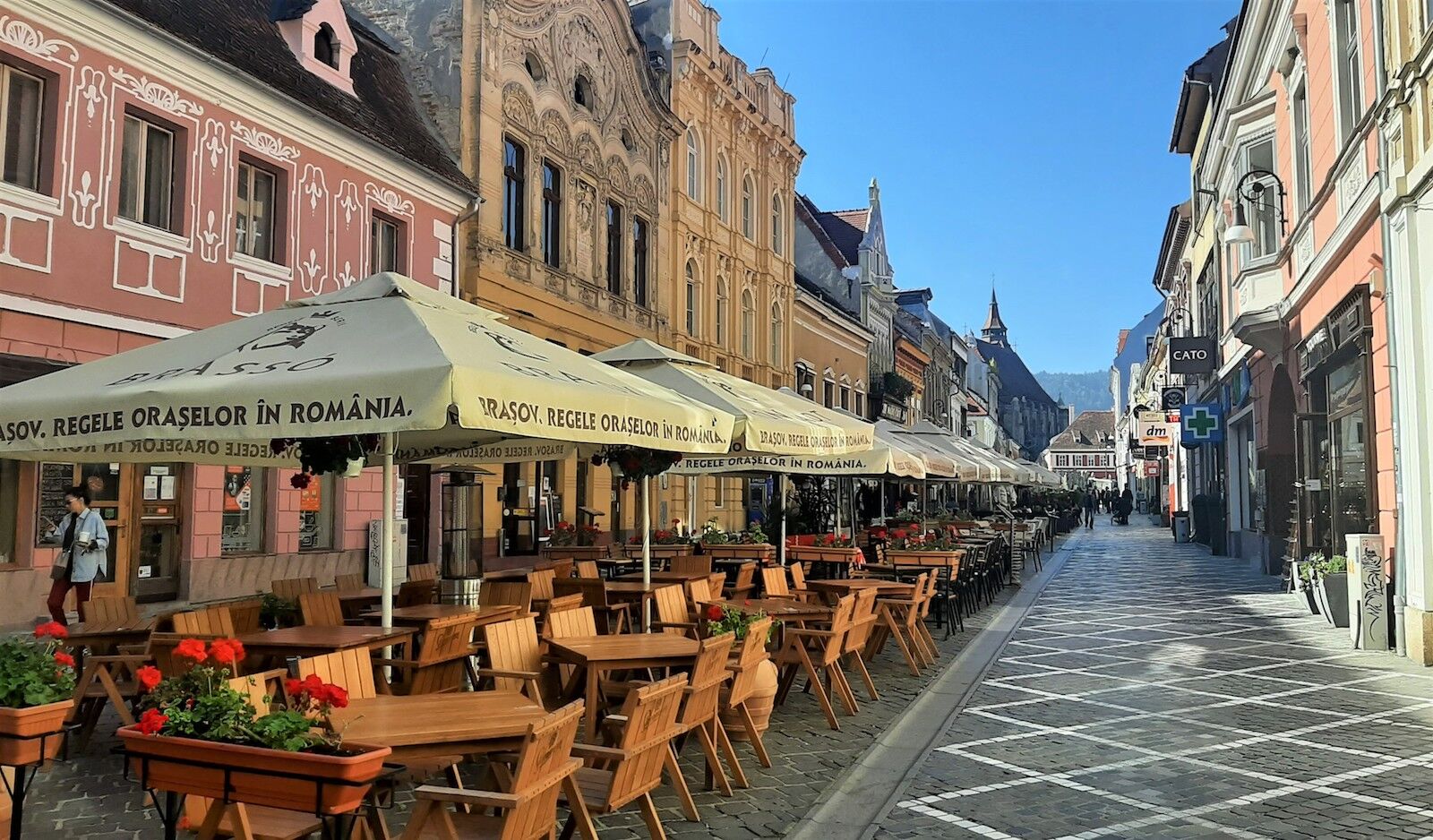 There are many brown bears in the mountains of the park, but as far as roads go, the Transfăgărășan is especially known for bear sightings. After my first encounter with the cute bear, I even saw two more, lurking with curious eyes from the side of the road. 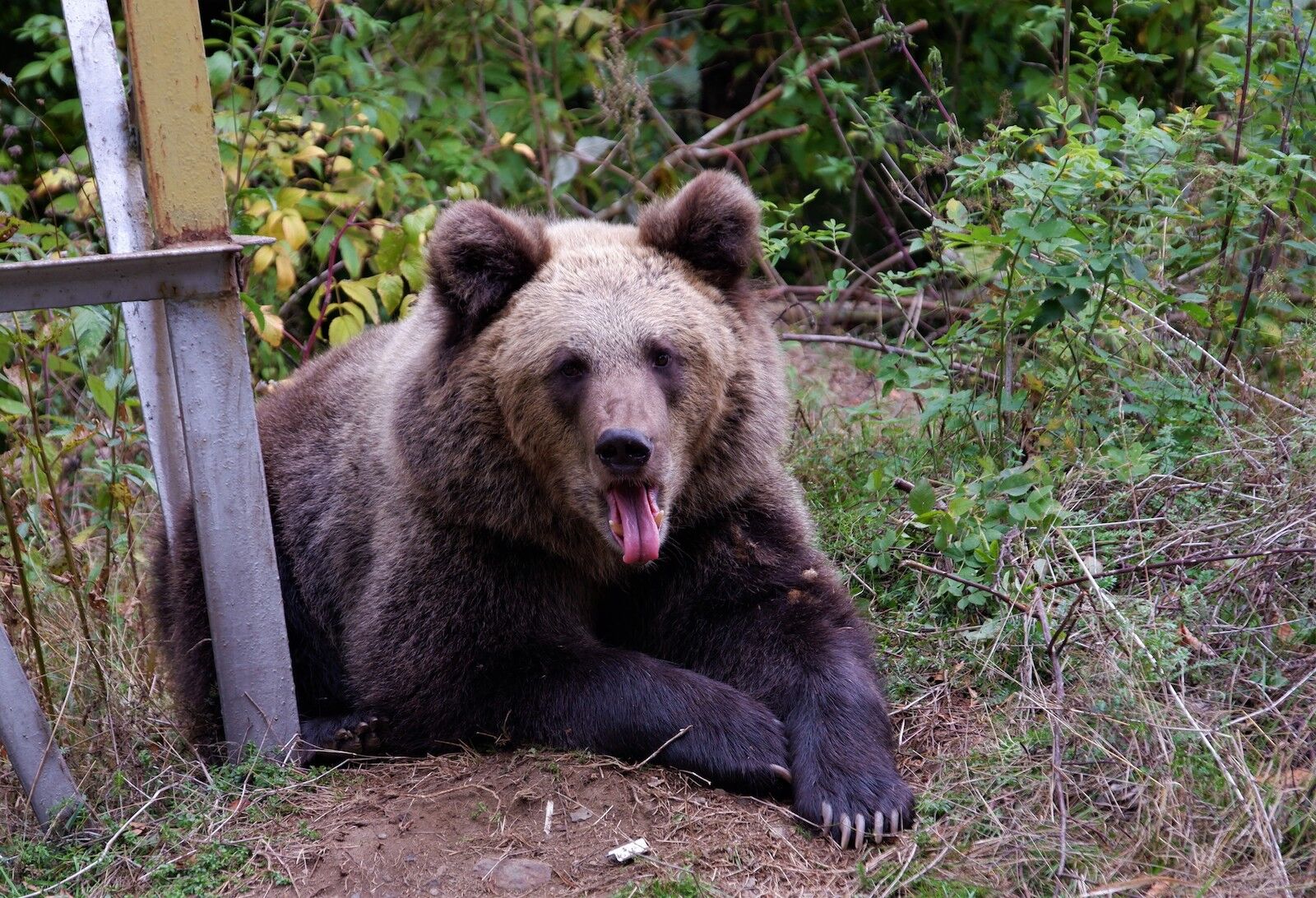 Romania is known for bears, and these weren’t the first I had seen. But my first bear sightings were in the Libearty Bear Sanctuary — the biggest brown bear sanctuary in the world — near Brașov, a small city in central Romania. The animals were once tourist attractions, living in small cages at restaurants, monasteries, gas stations, and circuses throughout the country. But they’ve since been rescued, and all 111 bears can roam freely across the sanctuary’s 170 acres.

The bears that didn’t come from tourist stops came from the wild, where aggressive behavior toward humans meant they had to be moved to a sanctuary, or killed. But when humans leave food out, bears will start to approach humans, which leads to dangerous encounters. This ultimately results in an unfavorable outcome: the bear has to be killed or sent to a closed-in area. It’s likely the bears I saw on the side of the road were also looking for a handout from humans.

This is a great place to see bears in Romania. Visits are heavy on wildlife education, and it’s definitely not a zoo. Visiting hours are limited and tours — which run only four days a week during an hour in the morning — are mandatory. The odds of seeing the bears are high as they’re usually fed soon after the tour, so they congregate near the feeding areas. The sanctuary limits the number of guests allowed each week and tries to find the balance between limiting human interaction and bringing in enough income from ticket sales to keep the animals healthy and cared for.

Camping in the wild in Romania 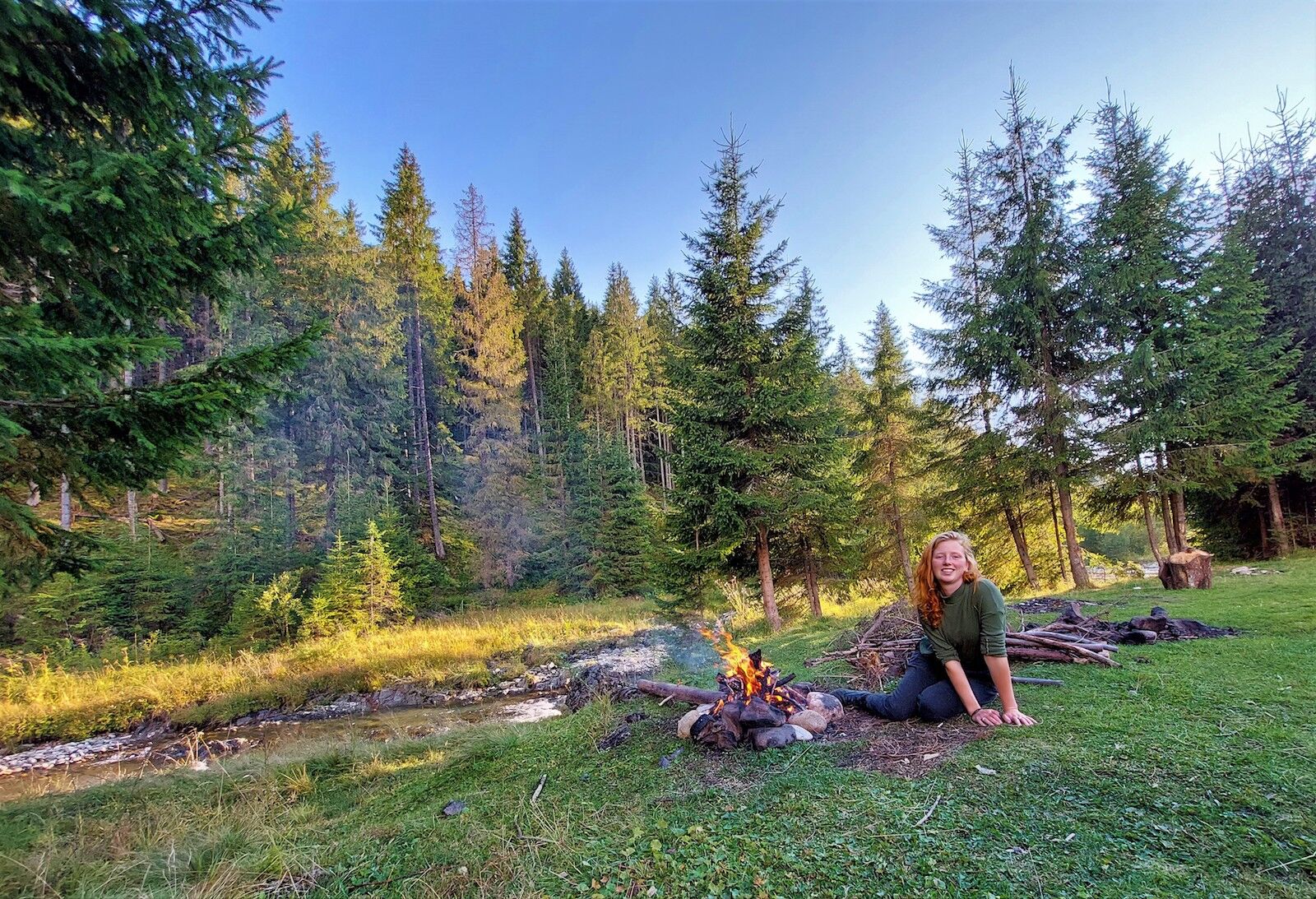 Romania is a wild place with mostly undeveloped forest, and estimates suggest that grizzly bears in Romania number around 5,000 to 6,000 — that’s more than any other country in Europe. (Russia, Canada, and the United States have the largest populations.) So while that certainly give you a chance of seeing them near roadways, as I did, the most likely bear sightings will be deeper into the woods and mountains.

Fortunately, in Romania, you can camp almost anywhere outdoors freely without permits or reservations, except for in national parks, nature reserves, private land, towns, and beaches. Vans and campers are popular, as sleeping in a tent may ever-so-slightly increase your odds of an unwanted animal encounter.  And it’s not just bears in Romania’s forests — you could also see wolves, lynx, and wild boars.

Romania is gorgeous, with fairytale-like camping spots in the wood. You can camp surrounded by huge firs, near the riverbanks of a rippling stream, or on a summit with magnificent views of misty mountains. Head to the Fagaras Mountains (the section of the Carpathian mountains in Romania) for endless camping and hiking trails, or visit Bucegi Natural Park. While you technically aren’t supposed to backpack in the park, many people do, though the proper way to do it would be to rent a campsite at the nearby Camping Zănoaga (which also rents tents and camp gear).

If you’re an international traveler, you’ll likely fly into Bucharest and need to rent a car. Since camping is so popular in Romania, plenty of campervan rentals are available around Bucharest, and renting vans is generally the most popular way for foreign visitors to camp. Renting one will allow you to safely park and camp just about anywhere you want without needing much gear. 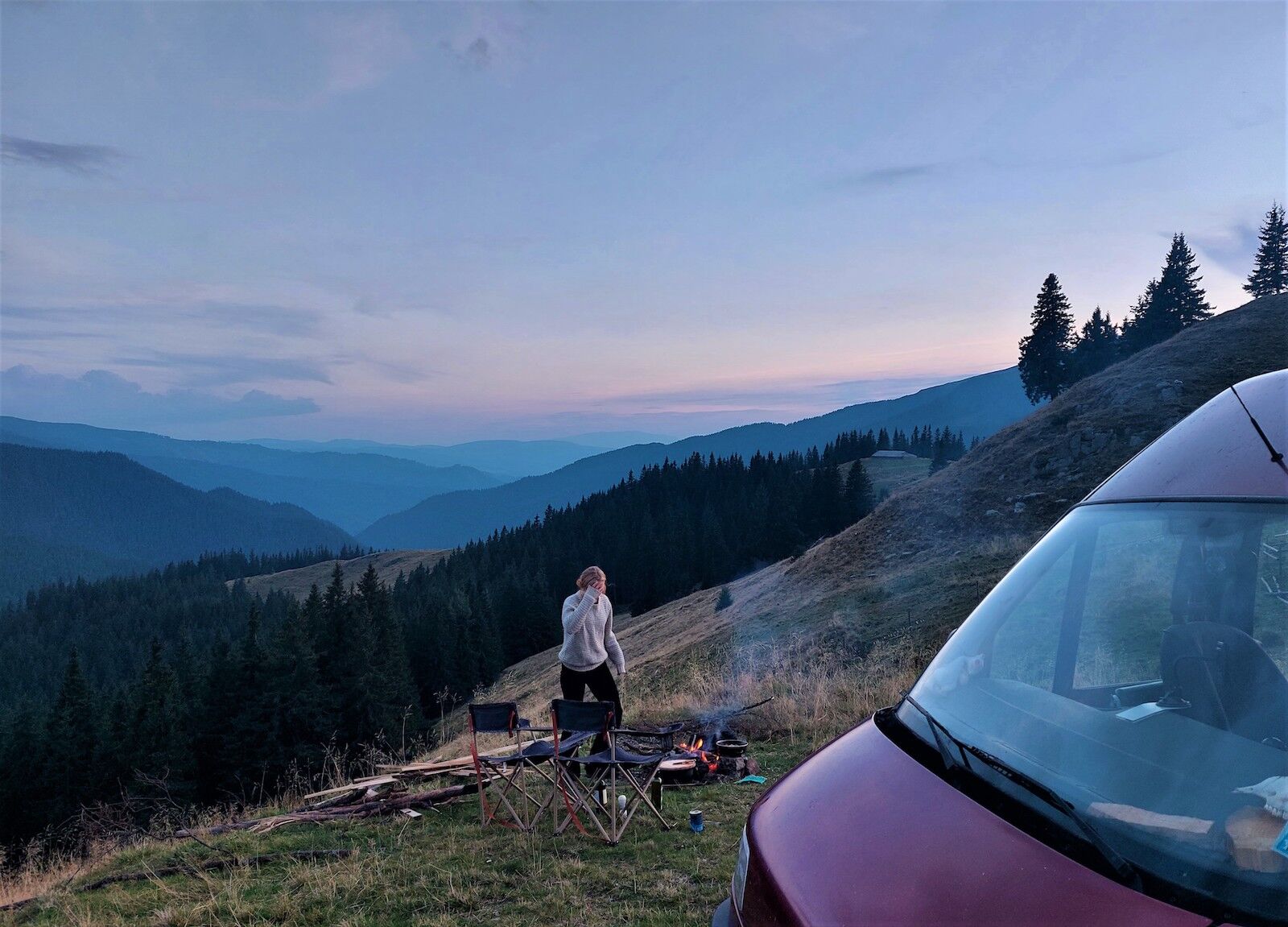 If you do choose to wild camp, be aware that poverty is a major issue in Romania. During my visit, I had multiple strangers press themselves against my van, asking for items and money as I passed through. It never gets particularly easy, especially when driving through small villages of lean-tos and handmade homes.

Tips for traveling in Romania’s wilderness: 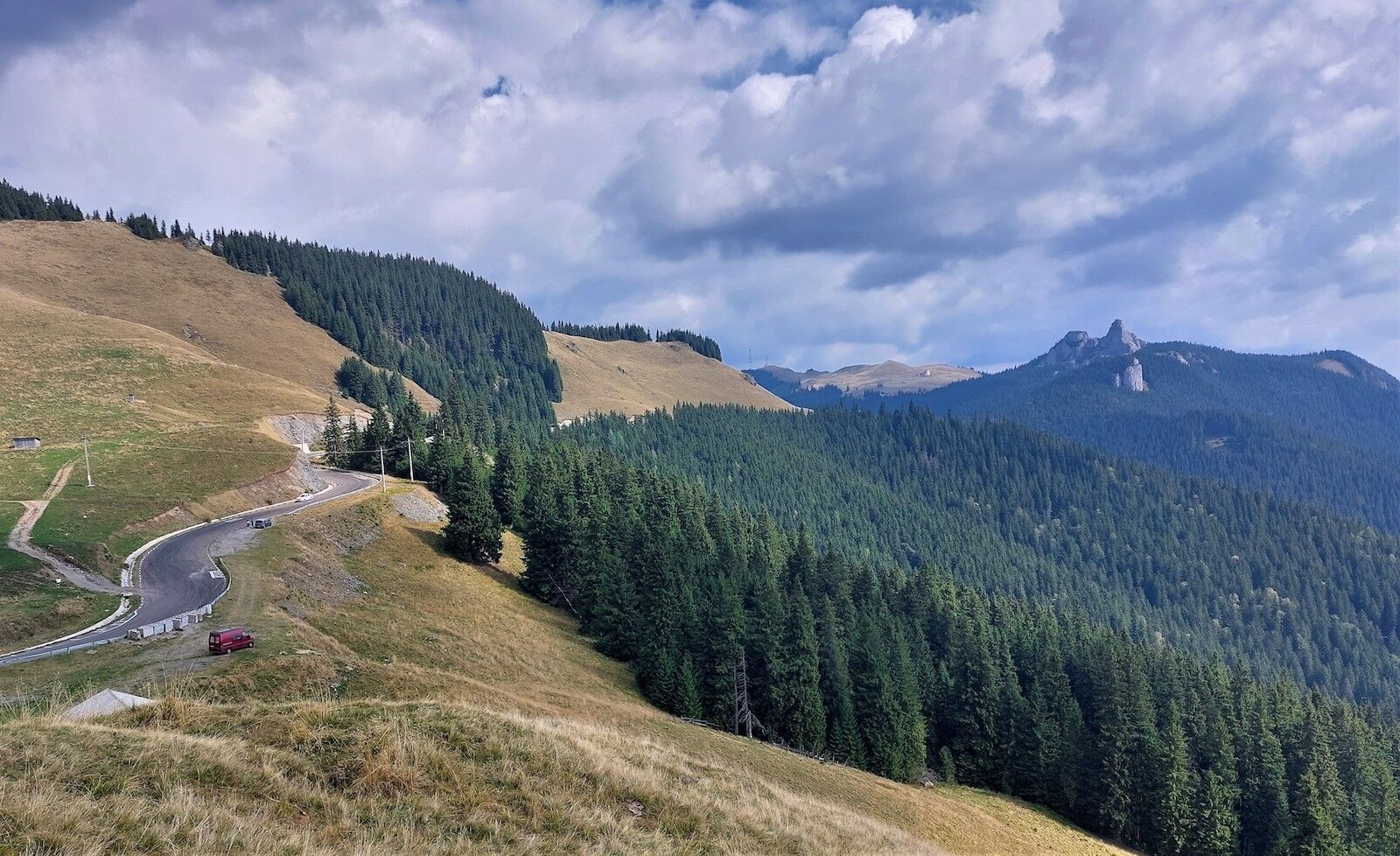 Roads: The roads in mountain areas are steep and sharp. The meandering routes mean traffic limited to something around 30 miles per hour. Only the biggest cities have double-lane highways. If you’re not in too much of a hurry, these slow drives are fantastic and lead you through magnificent landscapes. It’s not uncommon to see horses with wagons on the roads, transporting everything from people and animals to logs. Along the roads, you’ll also see lots of stray dogs running and barking at cars, so be sure not to speed. And on Sunday mornings, expect roads near towns to be full of locals coming and going from Orthodox church services, dressed in their best clothes and walking in large groups.

Roadside eats: Occasionally, you’ll see small stalls selling inexpensive home-grown fruits and vegetables near the road. Larger ones will also sell homemade products like jam, honey, cheese, and alcoholic drinks. They’ll usually let you try the beverages, displayed in used plastic bottles. Most common are red wines and several kinds of Palinka, a liquor made with pears, apples, plums, or any other kind of fruit.

Another treat worth buying, if you find it, is my now-favorite dessert: Papanași, similar to a cheese donut. The Romanian sweet treat consists of fried dough with cheese, topped with sour cream cheese and blueberry sauce —  just delicious. 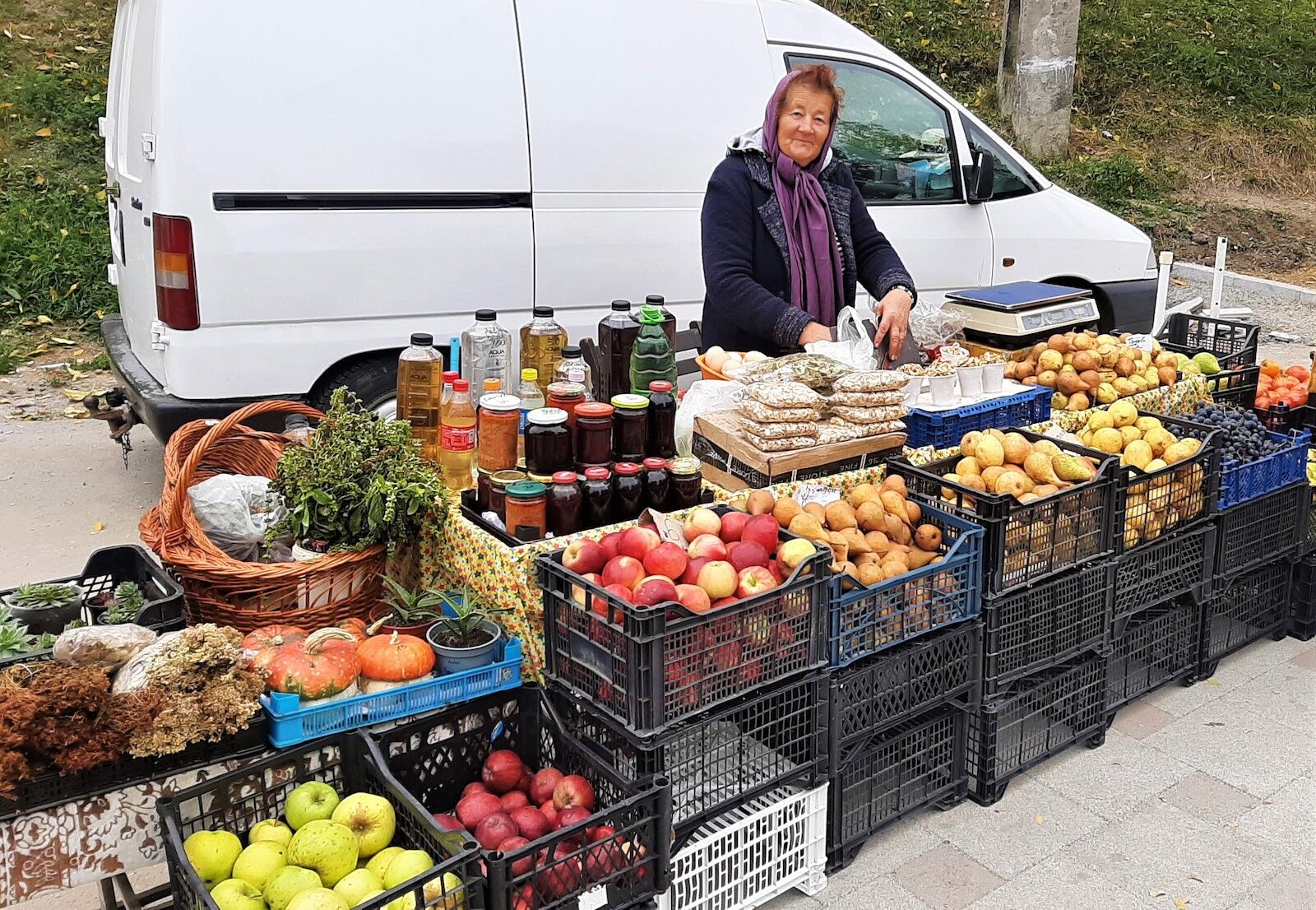 Haystacks: Common in Romania are pyramid-shaped haystacks. Farmers use them to stack their hay in a special way that prevents rotting and keeps the hay safe to eat for cattle through the winter. When you see them, look for the small space beneath the stacks, where its said secret lovers and AWOL soldiers used to hide. In the case of the lovers, suspicious fathers would supposedly put a pitchfork through the haystack, leaving a mark on the young gentleman inside that would later give him away. 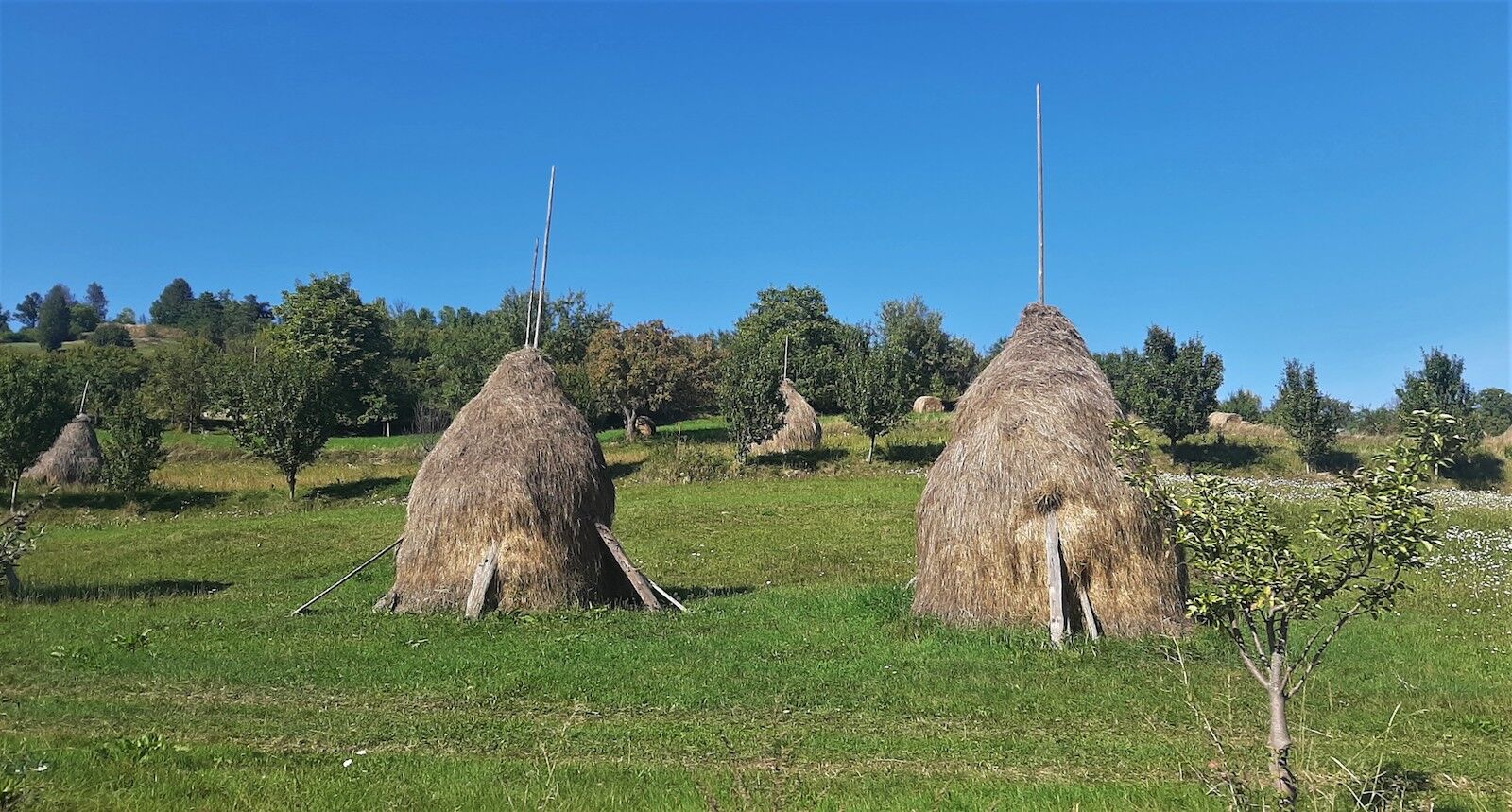 The weather: I visited in October, which I would recommend if you like brisk colors and foliage. It’s mostly dry with pleasant temperatures around 50 degrees Fahrenheit during the day. Romania has a continental climate, so summers are quite hot — July can be in the upper 80 degrees Fahrenheit — and winter is snowy, especially in the mountains. Regardless of when you camp, you’ll want long pants and an insulated jacket for the evenings if you’re in the mountains. If you’re tent camping, be sure your rainfly is waterproof.

Tagged
Camping Outdoor Wildlife Romania
What did you think of this story?
Meh
Good
Awesome

9 Natural Wonders You Won’t Believe Are in Pennsylvania
Here’s How To Visit Niihau, Hawaii’s ‘Forbidden’ Island
How To Do Your Very Own ‘Night on Earth’ Nighttime Safari Experience
Biscayne National Park Is the Perfect Day Trip From Miami
How To Find Remote Green Spaces Near You To Get Out of the House