Endless miles of scenic highways that wind coast to coast and meander around breathtaking natural wonders and ever-changing landscapes make hitting the open road second nature in the US. When it comes to the Midwest there’s often a misconception that it’s all about flyover states and repetitive countryside. But away from the big cities, industrial centers, and sprawling farmland, you can stumble upon some of the most European cities in America.

This road trip through the Midwest presents an itinerary for getting acquainted with what enticed the European settlers across the Atlantic and witnessing how their legacies are celebrated by ancestors. The journey starts in Holland, on the eastern shores of Lake Michigan, before taking in the Swiss-styled New Glarus and Cornish mining town of Mineral Point. There’s time to uncover a little bit of Germany in Minnesota and visit Iowa’s rural Danish villages of Elk Horn and Kimballton, too. It all presents a veritable smorgasbord of cultures from the Old Continent without having to depart from North American shores.

Visit Michigan for tulips and windmills 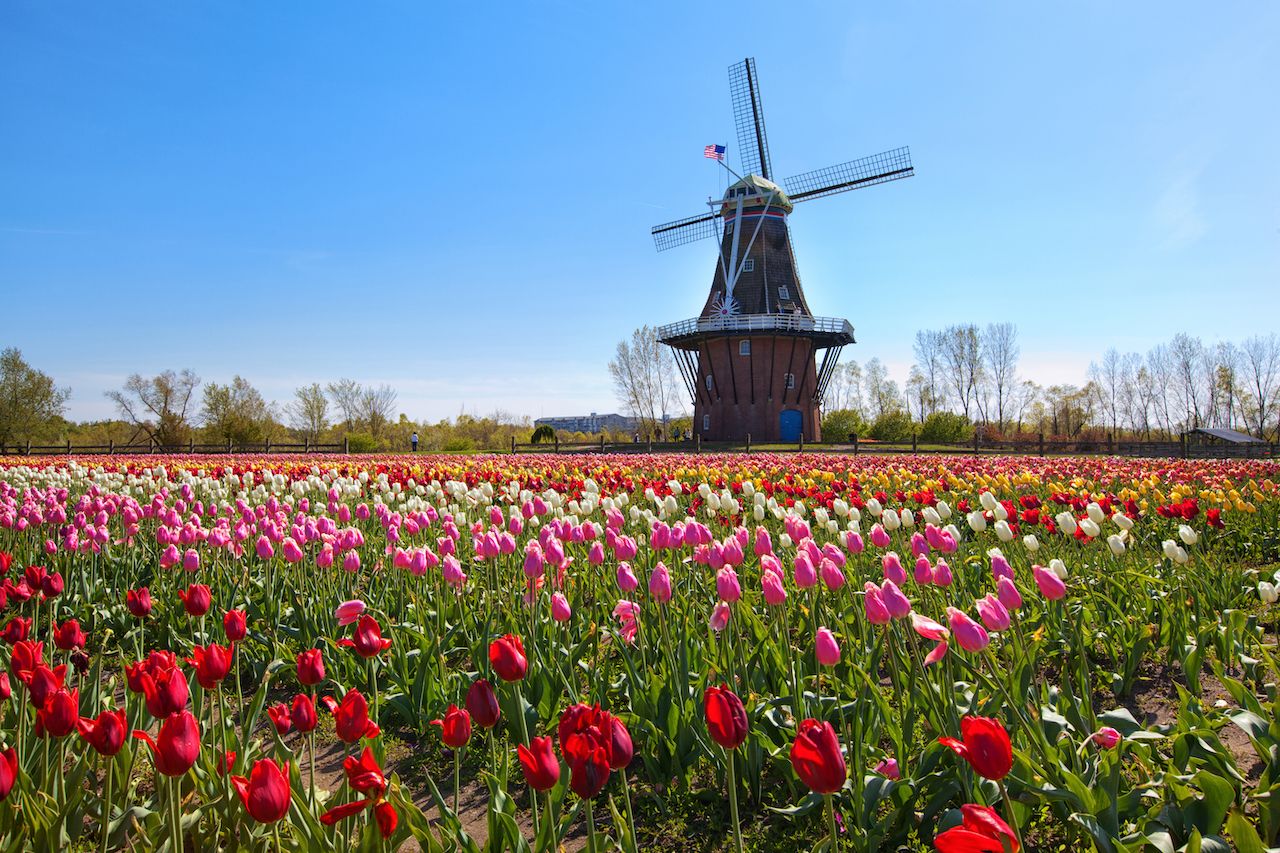 The banks of Lake Macatawa, which flows into Lake Michigan, mightn’t be the first place you’d imagine one of the most European cities in America. However, that’s where Albertus van Raalte and a group of Dutch Calvinist separatists made their home, called Holland, in 1847. Many immigrants arrived with the idea of finding a promised land, but it wasn’t always easy. Before things got good, the Dutch faced challenges from swamps, disease, and food shortages. Rumor has it that they also upset the native Ottawa people by stealing their sugar and meat — the Ottawas eventually moved north to protect their culture.

Make the Holland Museum your first stop for a glimpse into the town’s curious past and to peruse a collection of Dutch art. It stands on the northern side of Centenary Park, a social gathering point where tulip displays wrap around pathways. On the subject of the quintessentially Dutch tulip, you’ll see hundreds flourish in a kaleidoscope of colors from late-April to mid-May. The 12-mile-long Tulip Lanes, Veldheer Tulip Gardens, and Windmill Island Gardens are the best spots for this. The latter also houses De Zwaan, the only working Dutch windmill in the US. Head over to Nelis’ Dutch Village to experience a snapshot of daily life in the Netherlands. There’s cheese-making and tasting, clog carving workshops, and clog dancing performances alongside fairground fun for all ages.

Tip: Keep an eye on the Tulip Tracker for when and where to spot the emblematic flower during the annual Tulip Time Festival. 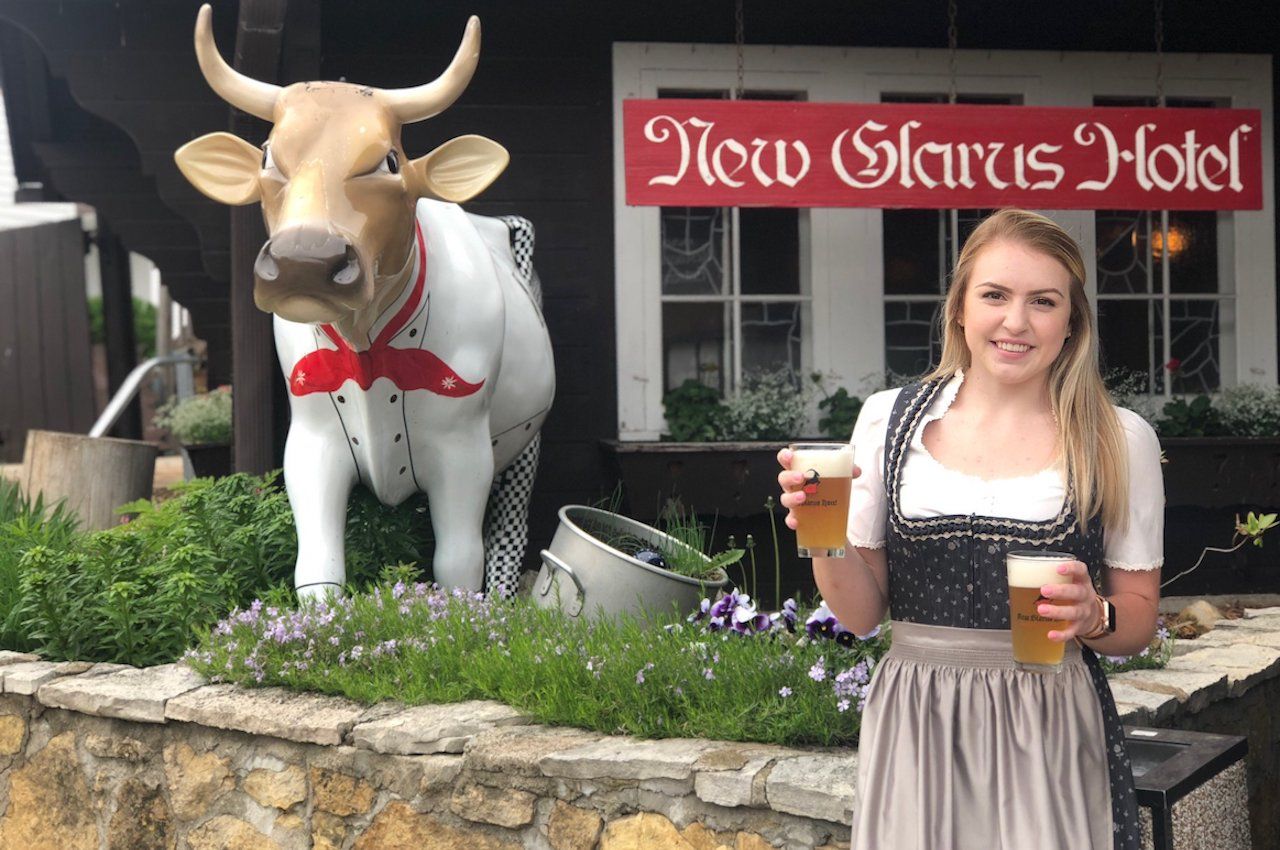 From Holland, it’s a good five-hour drive around the southern shores of Lake Michigan and through Chicago’s western suburbs before hitting the undulating emerald pastures of Wisconsin. About 90 minutes in you’ll hit Indiana Dunes National Park, a worthy pitstop for a lakeside picnic, Dutch cheese bought in Holland included.

Once you reach Green County, Wisconsin, it’s easy to understand why the 100 or so Swiss immigrants swapped Switzerland’s Canton of Glarus for this fertile region in 1845. Over 150 years later, New Glarus maintains its cute Little Switzerland moniker and is one of the most European cities in America.

Wander around downtown New Glarus and you’ll notice the Swiss flag flying alongside the Star and Stripes outside alpine-style chalets. Many of the chalets double-up as artisan shops, cafés, and restaurants. For food, there’s typical pastries on offer at the New Glarus Bakery and raclette, rosti (potato fritter), and schnitzel to try at the New Glarus Hotel Restaurant. The Swiss Historical Village Museum does a great job of retelling the town’s history while the Chalet of the Golden Fleece Museum is an authentic recreation of a Swiss Alps chalet home.

Back in the car, it’s a quick 30-mile cruise through rolling countryside along Interstate 39 to Mineral Point. In the early-to-mid-1800s Cornish miners came to seek their fortune after hearing of a wealth of mineral deposits located in the Driftless hills of Southwest Wisconsin. You can see how they lived at a collection of cottages, mine shafts and a pub preserved as the Pendarvis Historic Site. Then eat as the miners did by chowing down on a hearty Cornish pasty at the Red Rooster Café.

Tip: An alternative route to Wisconsin is to take the Lake Express car ferry from Muskegon (40 miles north of Holland) across Lake Michigan to Milwaukee. 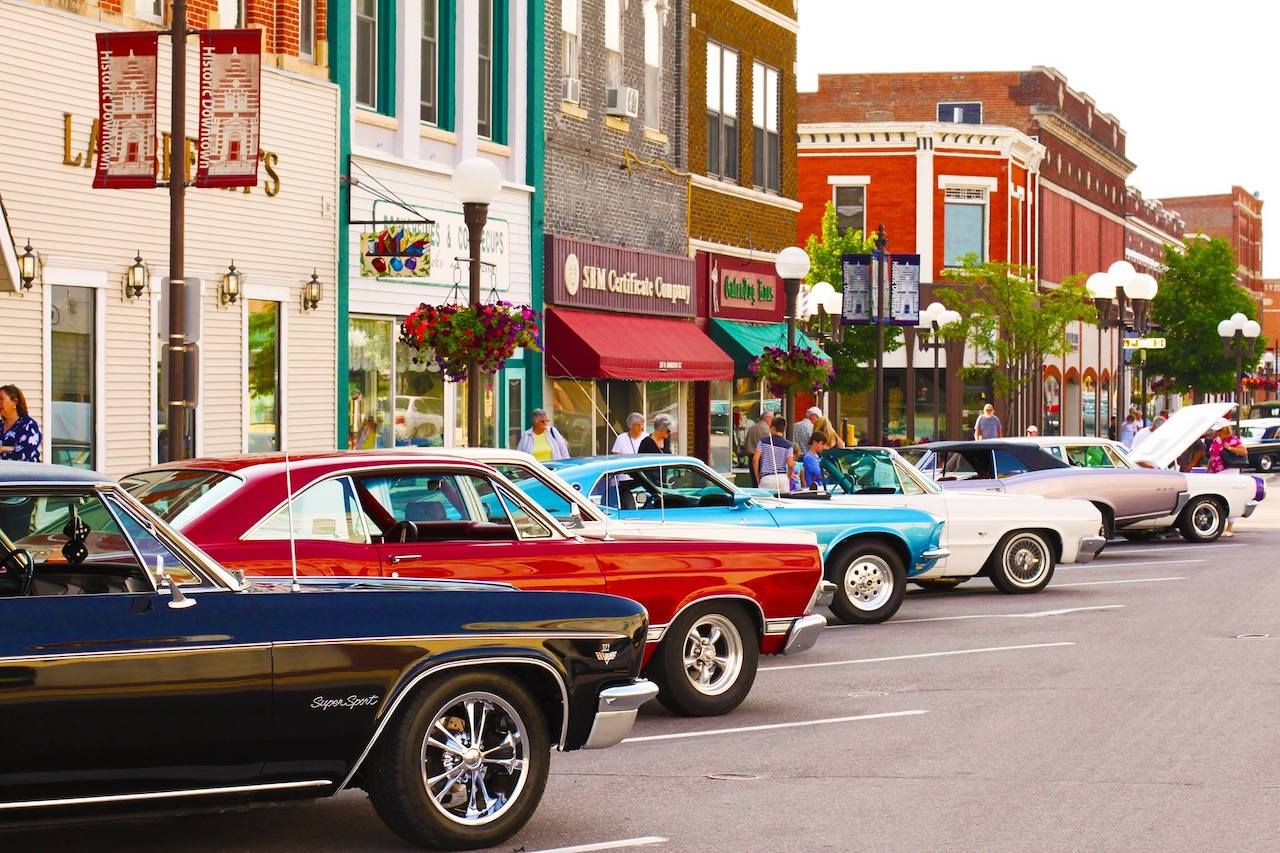 It’s another five-hour stint in the car from Mineral Point to our next stop, the beer-loving Bavarian city of New Ulm. German immigrants working for the Chicago Land Company established this city on the Minnesota River in 1854. When they named it after the medieval city of Ulm they probably had no idea that it would later become among the most European cities in America. This is in part thanks to the brewing traditions they brought with them. If you fancy a brew then there’s tours, tastings, and a taproom at August Schell Brewing Company. It’s one of the country’s oldest family owned breweries. In keeping with the hoppy heritage, the brewery and city host two all-singing, all dancing Oktoberfest festivals in October.

It’s not only about the beer in Minnesota’s Little Germany, though. The Rathskeller Restaurant and Bar, inside the Turner Hall, serves bratwurst sausages, pretzels, schnitzels, and other German staples. Art lovers will enjoy the restaurant’s murals that depict scenes from Germany. Around the city are some interesting landmarks such as the Glockenspiel at Schonlau Park. At timed intervals throughout the day the carillon’s 12 figurines perform to the chimes of 37 bells. Polka music was introduced to the city by the Sudeten Germans in the 1870s and can be witnessed live at the Minnesota Music Hall. Should you have the desire to take a piece of Germany with you then Domeier’s German Store has everything from cuckoo clocks to Christmas decorations. 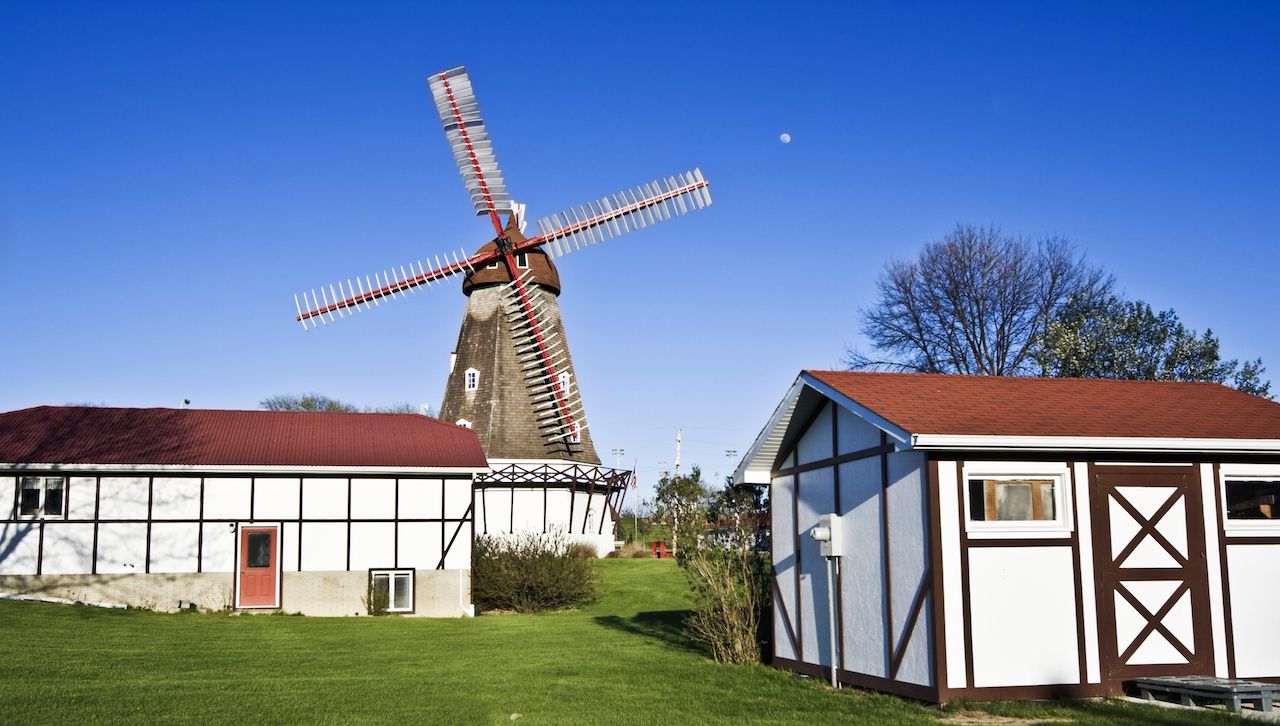 Leaving the sounds of glockenspiels and polka behind, our road trip moves south across the Wisconsin-Iowa state border to the self-styled The Danish Villages of Iowa. Kimballton and Elk Horn are the two largest Danish settlements in the country. Better still for roadtrippers, they’re located just three miles apart. Elk Horn is where most of the action is at, but Kimballton sets the scene on the way through with the Dannebrog Danish flag hoisted outside shops and homes.

Taking pride of place on Kimballton’s Main Street is the Little Mermaid Fountain, itself a wonderful recreation of the original Little Mermaid statue in Copenhagen. The fountain, of course, alludes to Hans Christian Andersen’s world-famous fairytale. Eight additional statues around the fountain celebrate more of Andersen’s revered works, including The Snow Queen and The Princess and the Pea.

In Elk Horn, The Museum of Danish America is an all-encompassing walk through Danish history. It’s set on a 35-acre property and home to an exhibition center and historical buildings. The 40,000-piece museum collection has everything from old photographs to a fishing boat and Lego models. Dominating the skyline at the southern end of Main Street is the Danish Windmill. The entire windmill complex features a replica Viking’s blacksmith and a model of the traditional Danish coastal town of Ebeltoft.

For food and drinks, Larsen’s Pub serves up one of Iowa’s finest breaded tenderloins and The Norse House Tavern has over a dozen beers on tap. If you happen to be around at the end of May then there’s folkloric music and Viking displays during Tivoli Fest. Meanwhile, Julefest celebrates the start of the Christmas season in late November and there’s usually plenty of frikadeller meatballs and glogg mulled wine to go around. This is perhaps when the villages best exude hygge, the Danish essence of creating a cozy atmosphere and enjoying the good things in life, with good people.

The drive back to the starting point of this European road trip is a fairly strenuous 8-hour journey. We suggest taking Highway 44 from Kimballton to drive through the eastern section of the Western Skies Scenic Byway. The byway is arguably the finest showcase of rural countryside and small town living in Iowa. Consider a stop at Starved Rock State Park, on the Illinois River, to break the rest of the long drive up. French explorers built a fort here in the winter of 1682-83 as a defense against English attacks. The fort has long since been destroyed but you can enjoy the park’s hiking trails, picnic areas, and watersports. There’s a campground if you want to feel like a real explorer, or the Starved Rock Lodge for a little more comfort.