Boba tea, once a niche import originally from Taiwan, started to rise in popularity in the United States a few decades ago. Nowadays, it’s not uncommon to see diverse groups of customers lining up in front of sleek boba tea shops in big cities and college towns. The rise of boba tea from a trendy, localized Taiwanese drink to a global phenomenon is a fascinating story many fans are likely unfamiliar with. And the story is still unfolding, fueled by recipe innovations and the exchange of ideas around the world.

Classic boba tea is made with lightly sweetened tea and chewy, pearl-sized tapioca balls that are shaken together like a cocktail. The name comes from the tapioca balls. It’s often called boba tea in the West and bubble tea in the East — the term “boba” is a cheeky name for the large tapioca balls, which in Taiwanese slang also means women with full bosoms.

Some of the most common variations involve the type of tea used and whether milk is added, but there’s no fixed formula. As long as there’s a drink and a jelly (tapioca balls or aloe vera, for example), imagination is the limit.

My college-aged cousin, who once worked part-time at a boba tea chain, once half-jokingly told me that her most unpleasant memory of the stint was memorizing recipes, of which there were no less than a hundred. (Oreo milkshake with “bubbles,” anyone?) Some boba tea shops have adopted an ordering system not unlike that of Chipotle’s by allowing customers to choose, among many things, their drink base, sugar level, and the type of jelly used.

How boba tea was invented 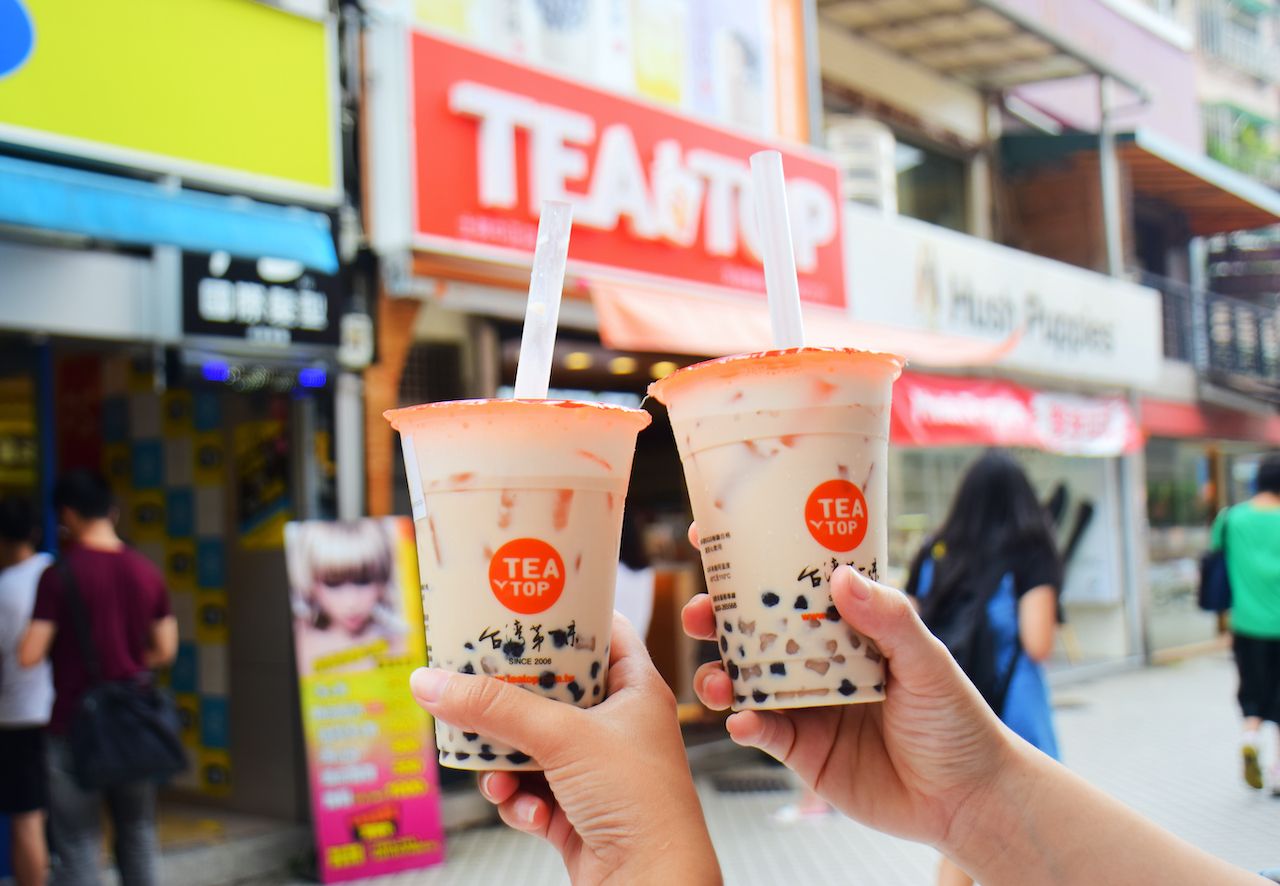 The rise of boba tea traces back to tea shops in Taiwan in the ’80s. These weren’t teahouses in the traditional sense, but instead were popular youth spaces selling foam tea, a then-trendy drink made of tea and syrup mixed in a cocktail shaker. At some point, a tea shop owner — it’s still disputed who exactly — had a spur-of-the-moment idea to put tapioca balls, a dessert ingredient, into foam tea. Young people were hooked. By the early ’90s, there seemed to be a bubble tea kiosk on every other block in Taiwan’s cities, many equipped with automatic tea shakers and cup sealing machines. Automation also codified the way bubble tea is served: in a tall, skinny plastic cup that’s sealed with a thin plastic foil to be poked open with a fat straw.

The factory town I grew up in China welcomed its first shop in 2000. For several weeks, it was the talk among kids at my school. A regular boba tea without milk cost 3.5 yuan (about $0.50) — not a fortune, but still pricey by the standard of that time. The tea is pleasantly malty, but the show is all about the tapioca balls. Made from cassava root starch, they were common in tropical provinces but had remained largely unheard of in most of mainland China until the late ’90s. The chewy, gelatinous balls themselves don’t taste like anything, but they provide structure and texture to an otherwise plain drink. For the uninitiated, the first sips can be experimental. You play with the flow in the straw to let in the right number of tapioca balls (preferably not a full mouthful) so that there’s enough room in your mouth to slide and squeeze them with your tongue and teeth.

This was around the same time when boba tea came to North America, first in predominantly Asian neighborhoods along the West Coast. Although Taiwanese chains played an important part in popularizing boba tea in the early days, the drink soon took on a pan-Asian identity. For Asian American youths who grew up in suburban California in the 2000s, hanging out in local boba shops was such a powerful collective memory that bubble tea has become nothing short of a symbol of Asian American youth culture.

By the time I came to New York, in 2011, boba tea was easy to find. Even the student center at Columbia University had a bubble tea stand. Its menu, at least in my time, was “old-school.” The options mainly consisted of green, black, or oolong tea with or without milk. But by then, recipe innovation was already going full steam in the boba tea world. Cafes and restaurants, many positioning themselves as premium brands, experimented with a wide variety of flavors, such as Thai ice tea, Indonesian es alpukat (an avocado and coffee milkshake), and even Chinese medicine cough syrup (very minty). Many recipes also incorporated classic American drinks, such as smoothies, slushies, and ice coffee. Mainstream brands have also taken notice. Trader Joe’s, for example, recently launched a cold brew coffee and boba ice cream.

Meanwhile, another bubble tea revolution is quietly brewing in mainland China, led by HeyTea, an uber-popular chain credited for inventing cheese tea — tea (with or without tapioca balls) topped with a foamy layer of whipped cream cheese. In the mid 2010s, anecdotes and memes began to mushroom on social media of people standing in line for hours to try the cappuccino-inspired tea drink. What felt like a one-time hype has grown into a booming industry with tens of billions of annual sales. To woo millennial and Gen Z consumers, venture-capital-backed boba tea chains are at war with each other to invent the most astounding flavors. Fruit cake tea? Sure. Brown sugar “landslide” tea? Bring it on.

It didn’t take long for this new genre of bubble tea to reach the US market. Many established boba tea chains now have cheese teas, fruit teas, and brown sugar teas on their menus. Independent cafes also appeal to their respective markets by using locally sourced ingredients, plant-based cheese, and batch-crafted foam tops.

This is a long way from the original formula conceived in Taiwanese tea shops. To some extent, the spread and iterations of boba tea around the world have been similar to that of many other foods once considered “ethnic” — first introduced by immigrants and entrepreneurs, then adapted and reinvented to fit local tastes. The race of recipe innovation and franchise expansion is red-hot as ever, fueled by capital, social media, and most importantly, the flow of people and ideas. Before the already frothy boba tea gets more elaborate, check the glossary below for a snapshot of the boba tea scene. 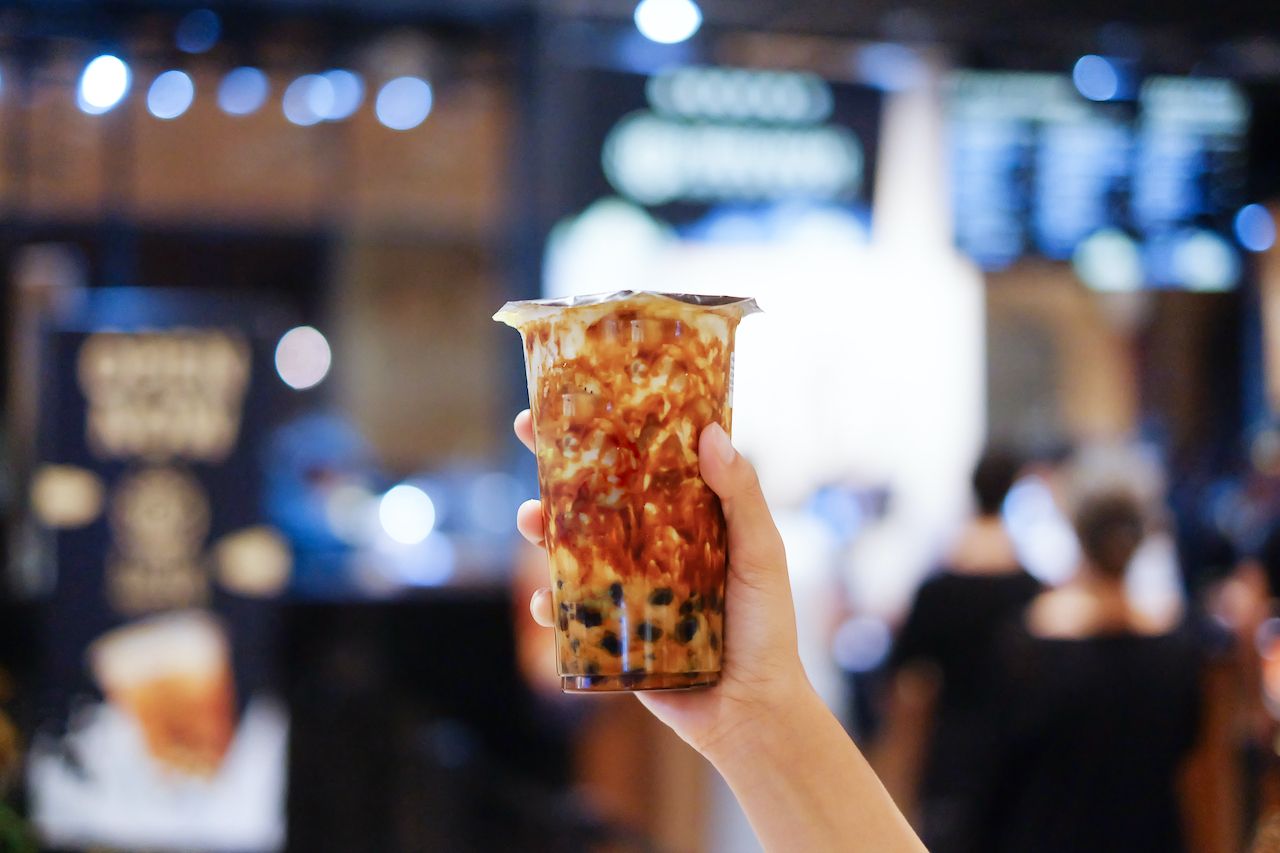 Boba (or bubble) cheese tea: This is a cold drink topped with a foamy layer of whipped cream cheese. The cheese top, often sprinkled with salt, adds a savory and tangy aftertaste. HeyTea, the chain which claims to have invented cheese tea, also ritualized the “proper” way to enjoy it — tilt the cup 45 degrees and sip from the cup rim to have a balanced mix of tea and cheese top.

Boba (or bubble) tea with fruit: As the name suggests, this drink is made by mixing tea with fruit juice and adding tapioca balls. It can also be made without tea, with cut fruit, and/or with a cheese top.

Taro boba (or bubble) tea: The purple-tinged taro root is a mildly sweet root vegetable often used in desserts across Asia. For boba teas, taro is pureed (or powered) and blended into the tea and milk mix to give the drink a sweet, nutty taste and slightly thick texture.

Brown sugar boba (or bubble) tea: Despite its name, this drink is usually tea-less. It has a layered color and texture. The basic construction consists of black tapioca balls at the bottom, thick, caramel-colored brown sugar syrup in the middle, and milk or cream at the top. When you stir the drink, the brown sugar syrup clings to the cup when mixed with the cream, giving the drink its iconic marbled look.

Boba (or bubble) tea with pudding: Instead of tapioca balls, some recipes use “pudding” for the jelly component. The pudding is often made with dairy, egg, and gelatin, and it has a custard-like flavor and texture that’s not unlike flan. Some boba tea shops also make “loaded” drinks with more than one jelly. Some popular options aside from tapioca balls and pudding include chia seed, adzuki beans, and grass jelly.

Snow boba (or bubble) tea: Think of a smoothie or milkshake with tapioca balls. The drink base is often made with blended ice, milk (or non-dairy creamer), and fruit.

Watch: How a small farm is defining the flavor of Hong Kong-grown coffee

How to find, and drink, the best coffees from around the world

The 5 best US cities for coffee lovers