Whether or not you celebrate Holi, if you live in an area where anyone does, you can spot the festivities from a mile away. Brightly dyed powders shower down on the giddy, tie-dyed revelers throwing them. Spurts of water turn the dusty mess into a muddy one. It’s no surprise that India’s Festival of Colors has caught the eye of the non-Hindu community, with new celebrations popping up around the world every year. Yet there’s more to Holi than engaging friends, family, and strangers in color wars. Below, we’ve outlined everything you need to know about India’s epic Holi festival before participating this year.

Holi is a Hindu festival held during the full moon of Phalunga, a month of the Hindu lunar calendar that falls in February or March. Though it’s known around the world as the Festival of Colors, Holi celebrates the start of spring when light triumphs over darkness, goodness over evil. It also has ties to Krishna, a central Hindu deity associated with love.

The legends behind Holi

Festivity at large is a tribute to Krishna, a puckish god known for playfully tossing flowers and dyed water at Radha, his beloved, and her accompanying gopis, or milkmaids. In one instance, troubled by Radha’s fair skin in contrast to his blue complexion, Krishna sought counsel from his mother, who advised him to smear Radha’s face with paint. These antics are believed to have inspired the tradition of throwing gulal, or colorful powder, on loved ones during Holi.

The theme of good vanquishing evil traces back to a different myth involving Hiranyakashipu, a demon king who fancied himself a supreme deity, and his son Prahlada, who worshipped the deity Vishnu. As the story goes, Hiranyakashipu enlisted his sister Holika’s help in killing his son for his disobedience. Holika, who possessed a fireproof cloak, was to trick Prahlada into following her onto a pyre where he alone would perish. Instead, protected by Vishnu, Prahlada was saved from the flames while Holika burned, thus beginning the tradition of lighting a bonfire the night before Holi, or Holika Dahan.

Among the earliest written records of Holi celebrations comes from the seventh-century Sanskrit text Ratnavali, penned by Indian emperor Harsha. He describes the festivities in detail, calling Holi the “great cupid festival” and illustrating a scene not unlike what you might see today. Beyond a generally jubilant atmosphere filled with singing, dancing, and drums, Harsha references squirt guns filled with colored water and perfumey red-yellow powder everywhere. 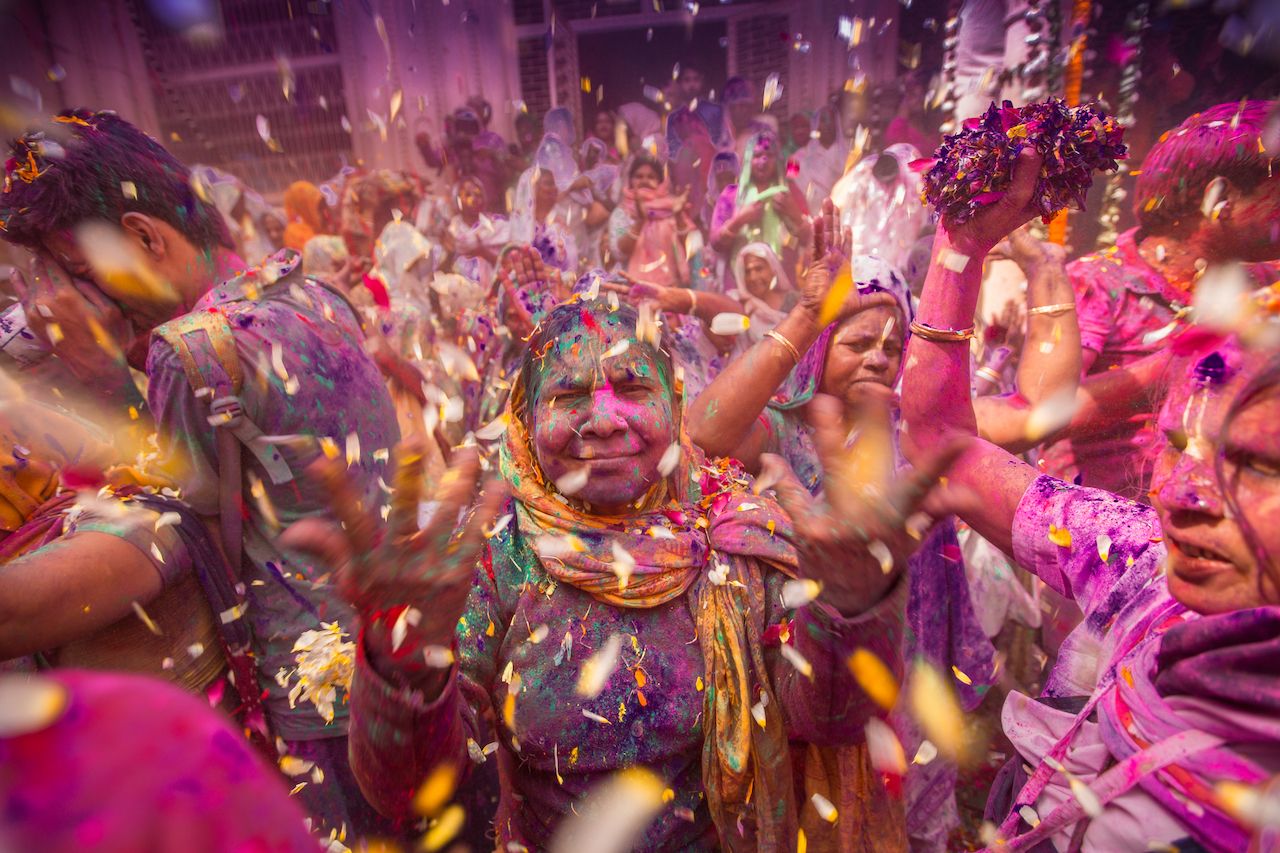 Anyone even peripherally aware of Holi knows that celebrants shower one another in bright powder. Many may not realize that it’s a two-day festival that traditionally kicks off with fire. In India, Holika Dahan pyres are lit after sunset when participants sing, dance, pray, and perform rituals like burning a Holika effigy. The main event takes place the following day, a day on which rites and ceremonies yield to unbridled play. Kids spray one another with water guns called pichkari. Adults join them, equipped with their own arsenals of gulal.

A time to celebrate loved ones, Holi is also a day for visiting friends and relatives. It’s typical to bring sweet treats like gujiya (a stuffed pastry made with khoya, or evaporated milk solids, and dried fruit) or bhang lassi, a cannabis-infused yogurt drink.

Is the powder thrown during Holi safe?

Early gulal was made with plant-based coloring agents like turmeric, a bright orange spice used heavily in Indian cooking. With time, chemical dyes became the standard, favored for their artificially bright hues and ability to be mass produced. Many have questioned the harmful effects of these modern powders, which may be toxic, on both health and the environment.

The Indian Journal of Dermatology has outlined common symptoms presenting in celebrants after the festivities, which include itching and burning sensations, lesions and abrasions, peeling skin, and an uptick in skin conditions like eczema and acne. Eye irritation has also been reported, and concerns have been raised over the consequences of breathing in the powder.

Environmental groups have similarly questioned the holiday’s impact on the planet’s health. In response, a number of gulal manufacturers have started advertising non-toxic, eco-friendly, and even organic powders. As with most labeling, these phrasings can be misleading, but there are legitimately safe products on the market. If you celebrate this year, remember to check labels for natural dyes and go for duller powders or pricier products when in doubt.

Where to get in on the Holi festivities 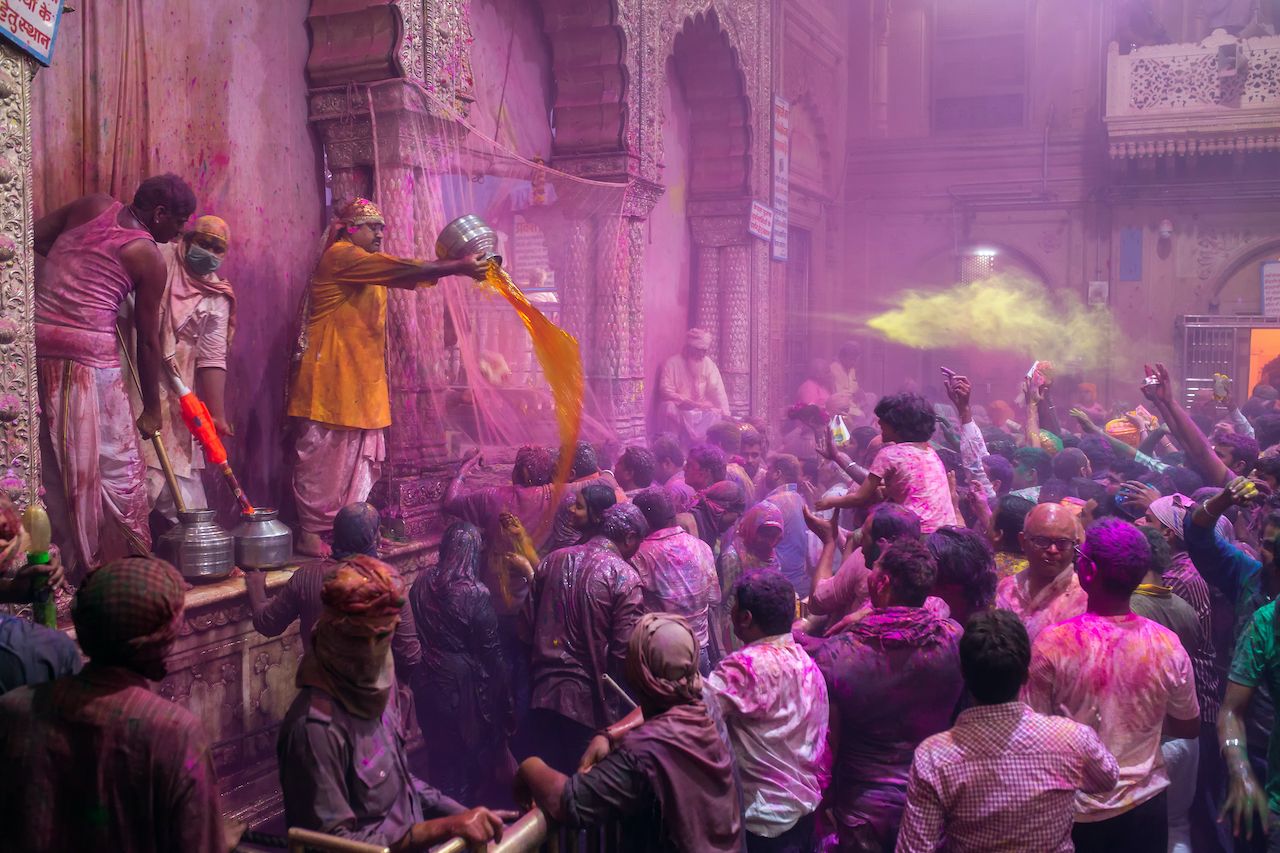 Northern India does the Festival of Colors like nowhere else on Earth. Major cities like New Delhi and Jaipur, and Udaipur farther south, go all out for Holi. In Uttar Pradesh, Mathura also takes the festivities seriously as the alleged birthplace of Krishna, Vishnu’s eighth avatar. Holi is far less ubiquitous and scaled-down in southern India. It’s unlikely you’d end up in a color war should you find yourself traveling through the area, but you may see fuller-than-usual temples.

These days, there’s no shortage of revelry outside of India, either. Annual events are hosted everywhere from New York and Berlin to Guyana and Mauritius. Spanish Fork, Utah, puts on one of the biggest and brightest events in the United States, even the world, with tens of thousands of attendees. Countless smaller celebrations are hosted throughout the country, as well, so be sure to look into Holi gatherings near you.

FestivalsThe 7 Best Places To Celebrate Holi Outside of India
Tagged
Festivals Religion India
What did you think of this story?
Meh
Good
Awesome