Many of us know the Holi festival as that event where you gather in huge crowds to throw powdered dye at each other, but it’s much more than that. Holi or Spring Festival is an important Hindu festival that marks the arrival of spring, and is celebrated all over the world. The festival’s roots lie in one Hindu legend that features the demon king Hiranyakashyap, who believed he was superior to all the gods. His son, Prahlad, rebelled and worshiped the god Vishnu, so Hiranyakashyap conspired to burn his son alive with the help of his sister Holika, supposedly immune to the flames. Prahlad was saved by Vishnu, while Holika burned to death. Holi, whose name comes from Holika, commemorates this legend by celebrating the triumph of good over evil. Although Holi originated in India, the festival has exploded in popularity and spread throughout the world. If you can’t make it to India for this colorful festival on March 9 and 10, here are some of the best places to celebrate Holi in 2020. 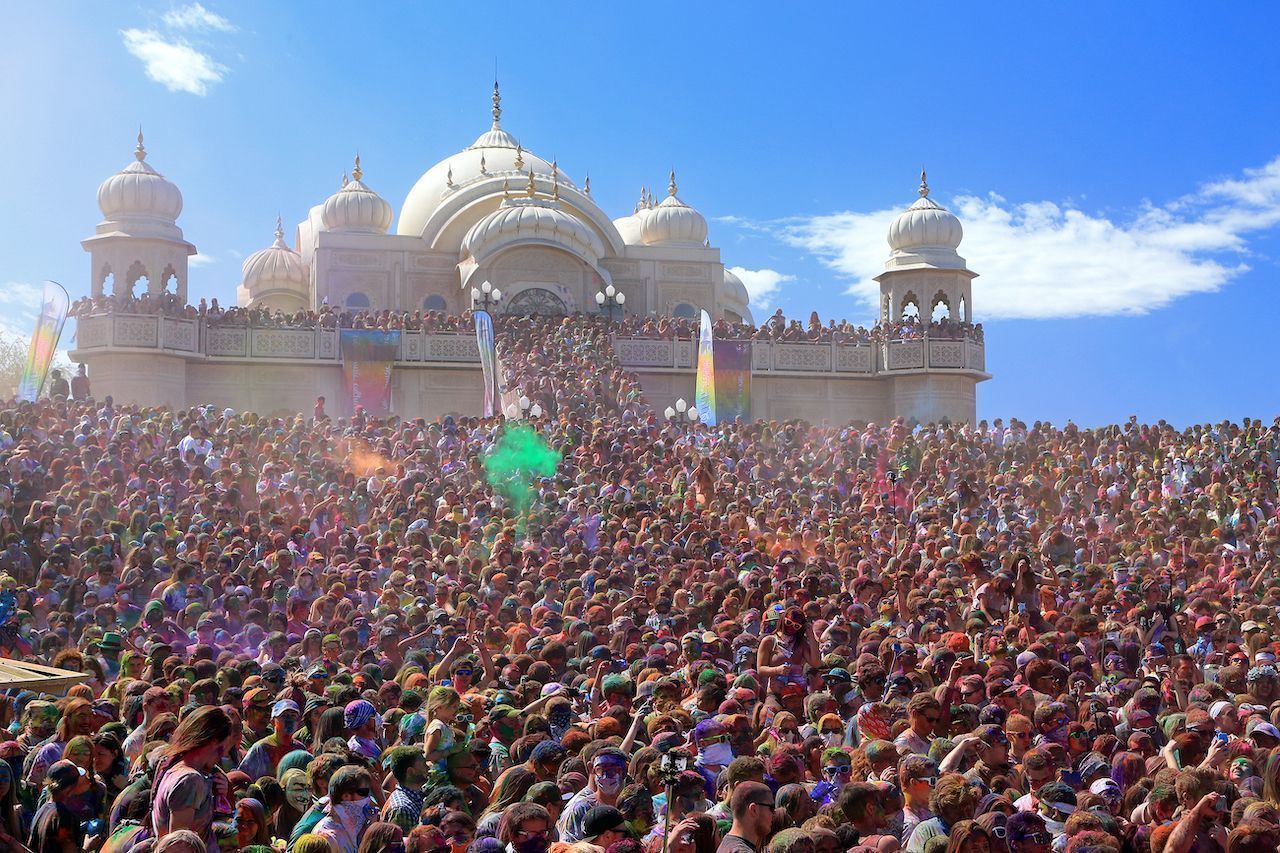 The world’s biggest Holi celebration isn’t even in India. Just outside the city of Spanish Fork, Utah, around 70,000 people regularly attend the Festival of Colors, which began back in 1989. The event was started by the local Hare Krishna temple, it still runs it to this day. The official website promises two days of lively, color-filled activities, including interactive dance, bands, DJs, yoga classes, vegan and vegetarian food, and good cheer. Live performances range from hip hop and soul to traditional Bhakti fusion dance and BollyPop. Environmentally friendly colors will be available for $3 per bag, and dust masks and bandanas will also be sold. The event takes place at the Sri Sri Radha Krishna Temple on Saturday March 28 from 10:00 AM to 5:00 PM, and March 29th from 11:00 AM to 4:00 PM. A multi-entry wristband costs $6.50, but there are various registration options available on the event’s website. 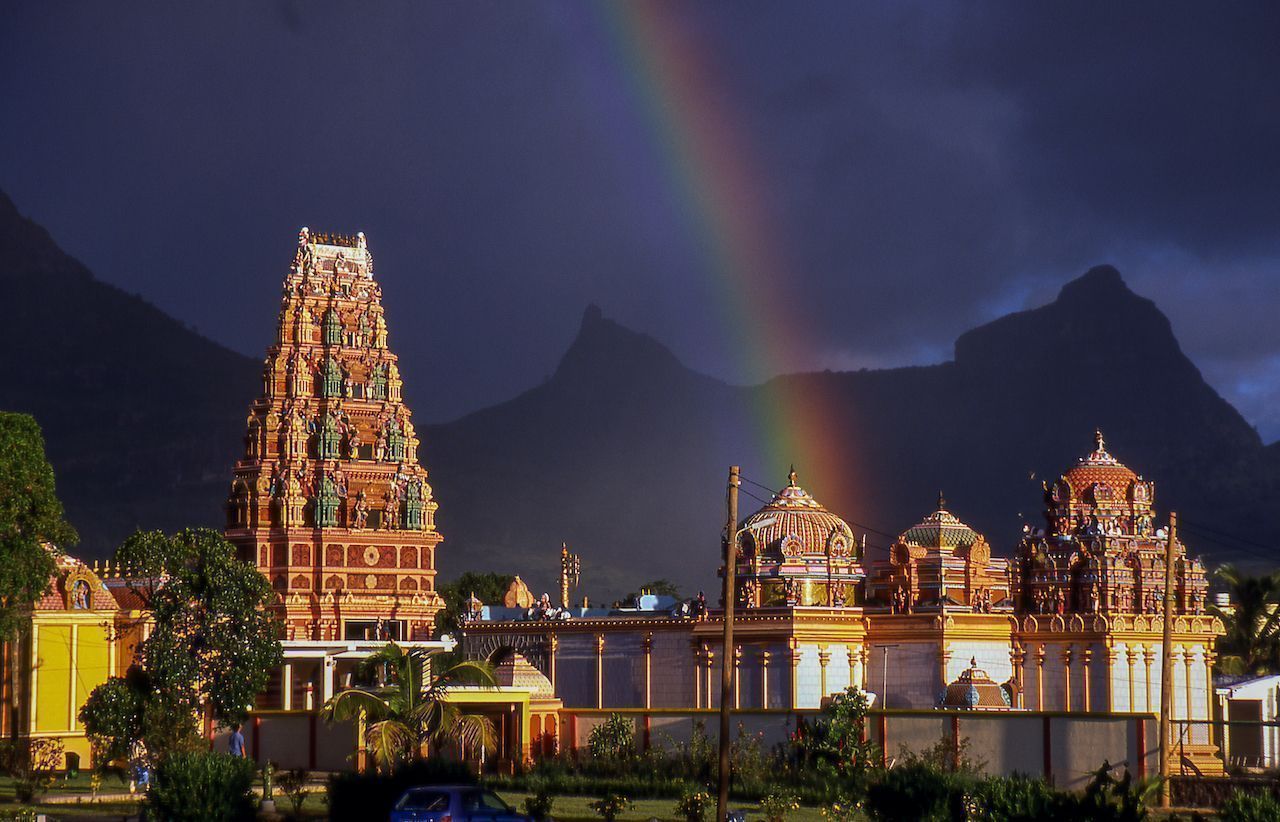 Mauritius is a small island nation east of Madagascar in the Indian Ocean, and it is home to a large Hindu presence. Most of the population of Mauritius, of which two-thirds are of Indian ancestry, considers itself Hindu — so Holi is widely celebrated on the island. In commemoration of Prahlad’s triumph over Hiranyakashipu and Holika, people build beach bonfires to kick off the celebration that includes folk singing and dancing. The next day, massive crowds descend upon the streets to throw handfuls of colored powder and water on each other. Beyond paint-slinging, participants exchange gifts with their loved ones and give gifts of sweets. This year, Mauritius is celebrating Holi from March 10.

In Guyana the celebration goes by the name of Phagwah, because it was originally celebrated during the month of Phagun, the twelfth month of the Hindu calendar. On Basant Panchmi, 40 days before the start of the Hindu Festival of Colors, the Guyanese, many of them from Indian ancestry, plant a castor oil tree to honor Saraswati Devi, the goddess of knowledge. On Phagwah, a pyre is built and lit around the tree, and fire consumes it like it consumed the evil Holika. Guyanese also celebrate by throwing dye in the form of water and powder, as well as with processions, traditional songs called chowtals, and the exchange of foods like gulab jamun, gulgula, and pholourie. 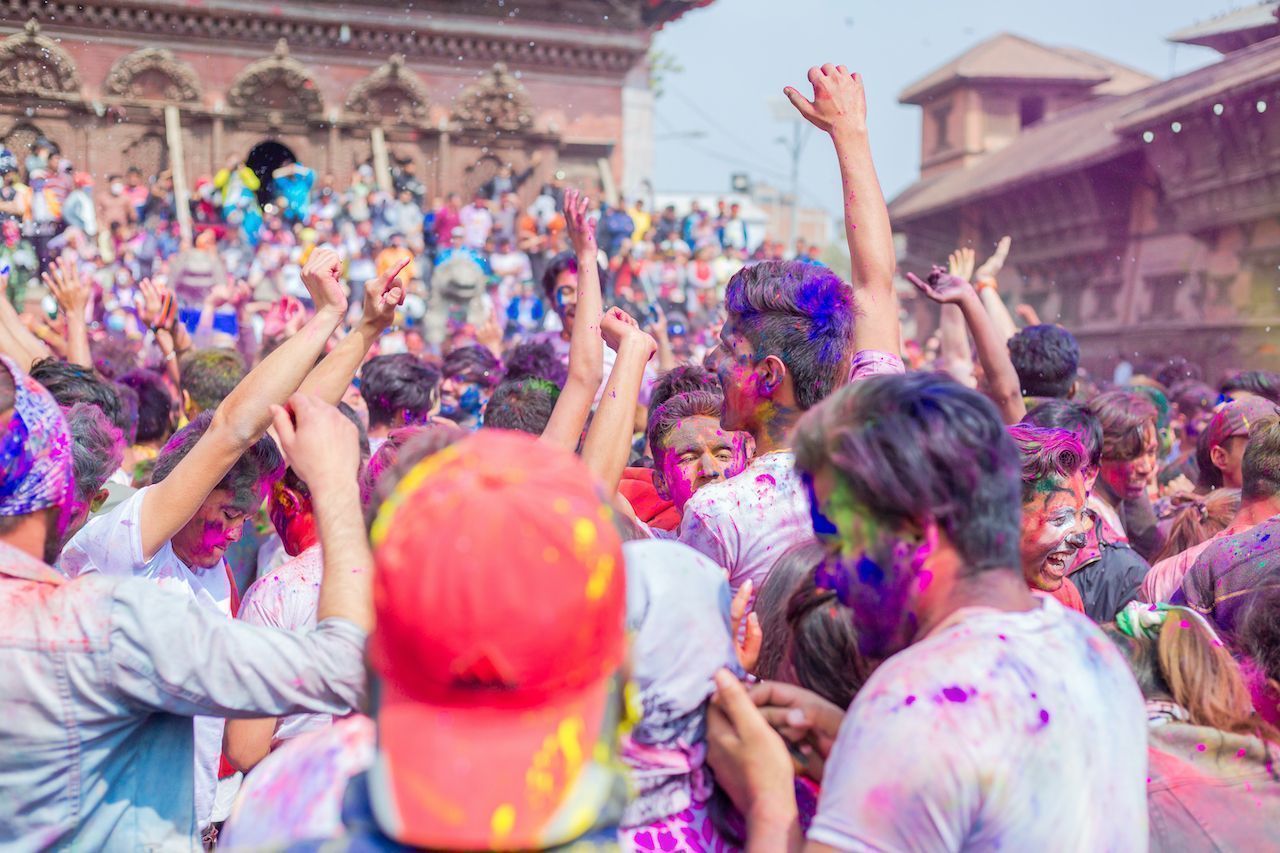 In Nepal, Holi is known as Phagu Purnima. Although a predominantly Hindu nation, Nepal celebrates Holi somewhat differently than India, with the erection of the chir, a wooden pole decorated with colorful strings of cloth, in a public space one week prior to the start of the festival. In Kathmandu, the pole is set in Durbar Square, the center of the entire festival in the capital city. Throughout the course of the festival, participants throw powdered dyes and water balloons at each other, dance, pray, and exchange food. On the festival’s final day, the chir is burnt to ashes. This year, in most of Nepal, Holi will be celebrated on March 9 in the Hilly Regions — including Kathmandu and Pokhara — and March 10 in the Terai Regions.

This Caribbean island has a large Indian diaspora, making Holi, or, Phagwah one of the country’s most important celebrations. Hindus are said to have brought the holiday to Trinidad and Tobago around 1845, after migrating there from Bihar, India. Since then the holiday has been observed every year, though now it’s celebrated by citizens of all faiths. Like everywhere else, Hindus in Trinidad ring in spring with a festival of colors, folk songs, and dance, though their celebrations feature music played on dholaks (two-headed hand drums) and manjeeras (hand cymbals). Trinidad is celebrating Holi on March 10 this year. 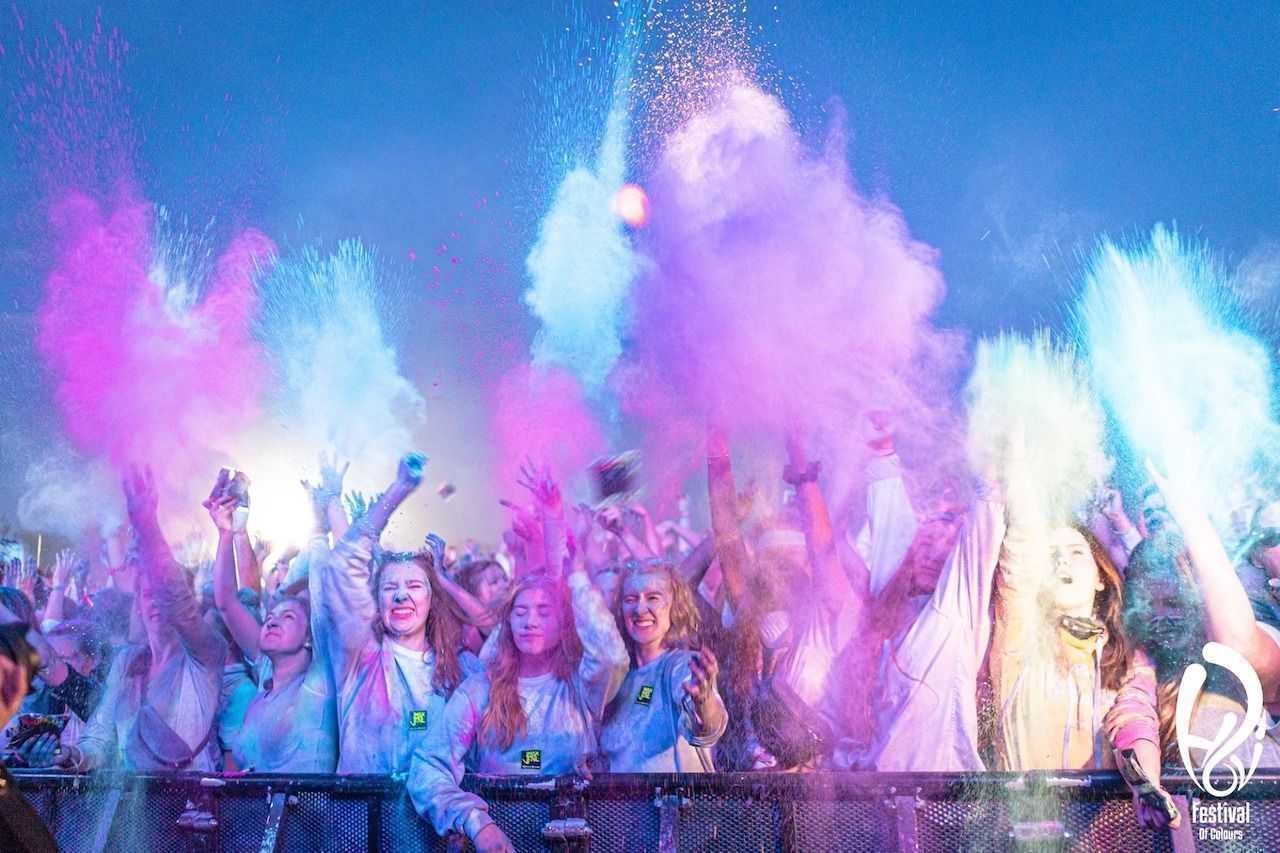 Although Holi is traditionally celebrated in March, that’s not stopping some countries from waiting until the weather warms up to commence the festivities. Berlin waits until the end of August to celebrate Holi. On August 29, huge crowds descend upon the Zentraler Festplatz in Berlin for the Holi Festival of Colors. Tickets cost approximately $22 though you can spend more for color packages and VIP experiences. If you can’t make it to Berlin, similar celebrations will be taking place all over Germany from early July to late August, so chances are you can always attend the one most convenient for you. 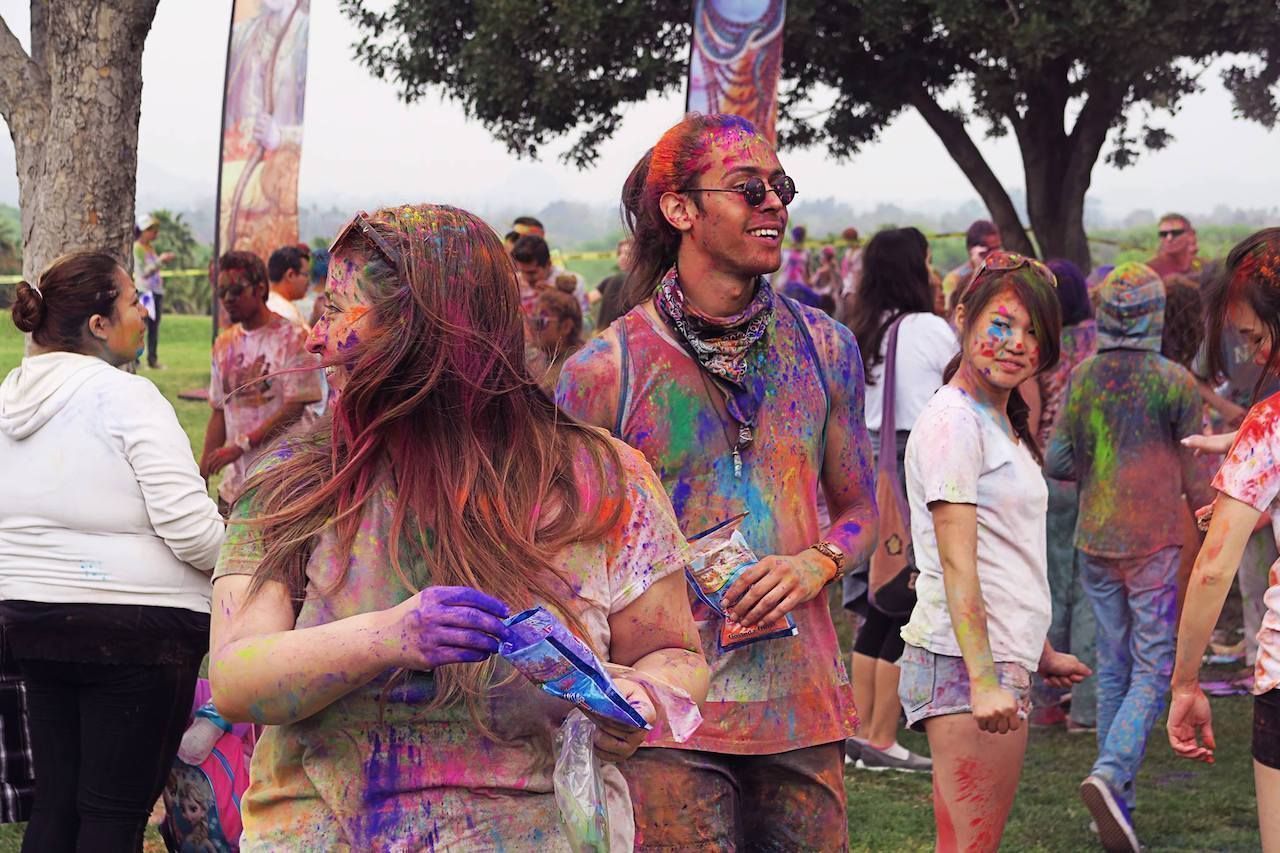 This Californian take on Holi combines the festival’s traditional, spiritual elements with more modern features that make you feel like you’re at one big party. Taking place at Riverside’s Martha McLean Park, the Holi Festival of Colors has live music, yoga, traditional dancing, Indian cuisine, and, of course, the throwing of colors. Yoga teachers will be present to get beginners on the right track. The festival will take place on Saturday, March 14 from 11:00 AM to 4:00 PM. A basic wristband costs $6.50 with other VIP options available, as well as those that include color packets.

A version of this article was previously published on March 6, 2019, and was updated on February 26, 2020, with more information.

Epic Stays7 Spectacular Heritage Hotels in Rajasthan for a Luxury Trip in Northern India
Tagged
Festivals Holidays
What did you think of this story?
Meh
Good
Awesome