No place in India exemplifies the spirit of monarchy and the splendor of royalty better than the state of Rajasthan. The very name contains royalty: Raja translates to “king” and sthan refers to “place” in Hindi and other Indian languages. When the British left India, there were about two dozen princely states in the region, which merged into the new Union of India, along with other princedoms around the country.

The erstwhile royalty was allowed to retain their properties and was granted an allowance; however, after the privy purses were abolished, many families were not able to maintain their vast estates. But the magnificent structures were not abandoned so easily. They became a potent magnet for tourism and were therefore converted into heritage hotels. They could offer guests an authentic experience of royal privilege and give them front-row seats to the artistic and architectural greatness of the days gone by.

Today, many heritage hotels are managed by luxury hotel chains. Guests spend their nights in the same suites that were once bedrooms of kings and queens and have their meals on dining tables reminiscent of royal banquets. But the regal life does not stop there; many heritage hotels also provide horse-riding facilities, polo races, rides in vintage cars, and more.

Though the days of emperors and kings have long gone in India, you can still experience the magnificent edifices they built, and the artistic luxury that embellished them by staying in these nine luxurious heritage hotels in the Indian state of Rajasthan. 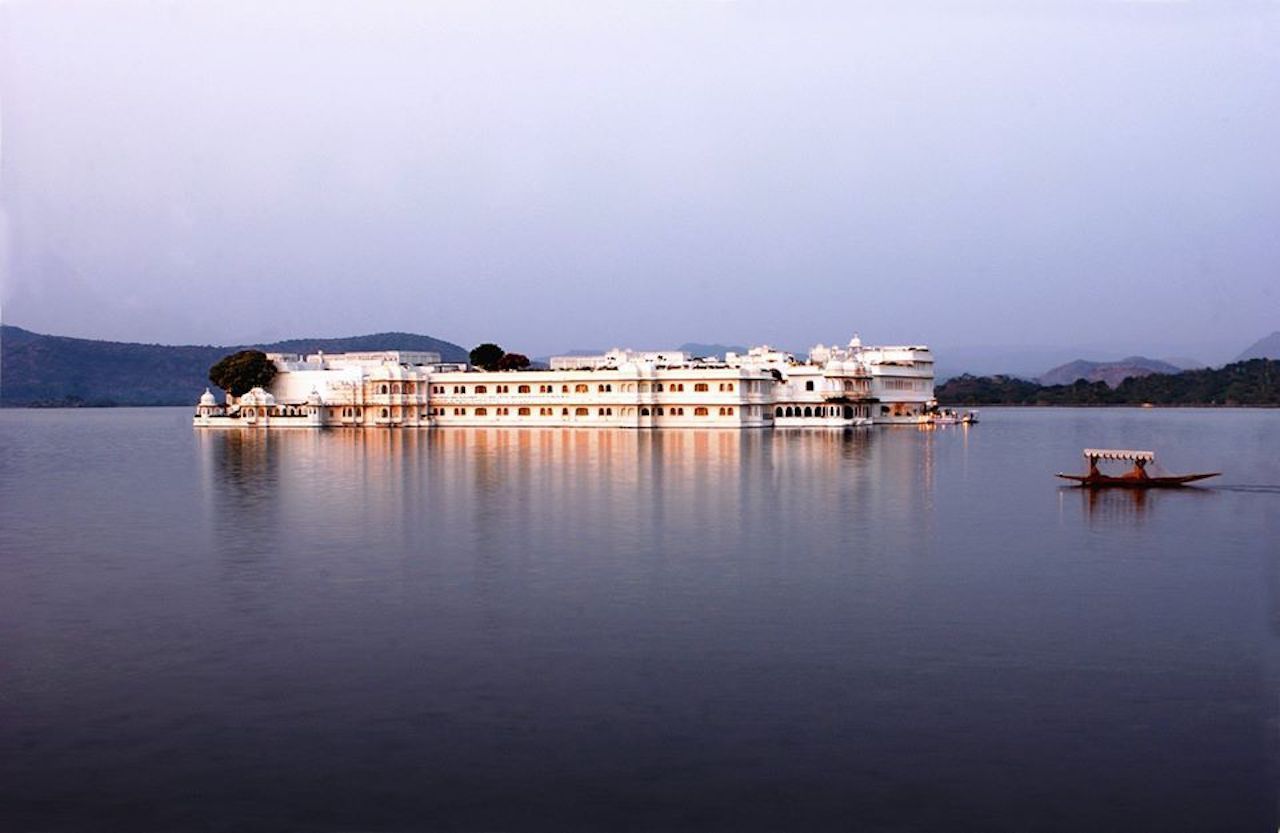 In the mid-18th century, the young prince of Mewar requested his father to let him reside in Jag Mandir, an island palace, with his ladies. Maharana Sangram Singh II not only rejected the request but challenged his son to make his own pleasure palace. The young prince did not take the taunt lightly and what resulted was a magnificent marble palace in the middle of Lake Pichola.

The palace has 18 grand suites and 65 luxury suites whose opulent interiors are only matched by the architectural grandeur of the hotel. Set against the picturesque Aravalli Hills and floating on placid waters, all the rooms offer spectacular views of the lake. 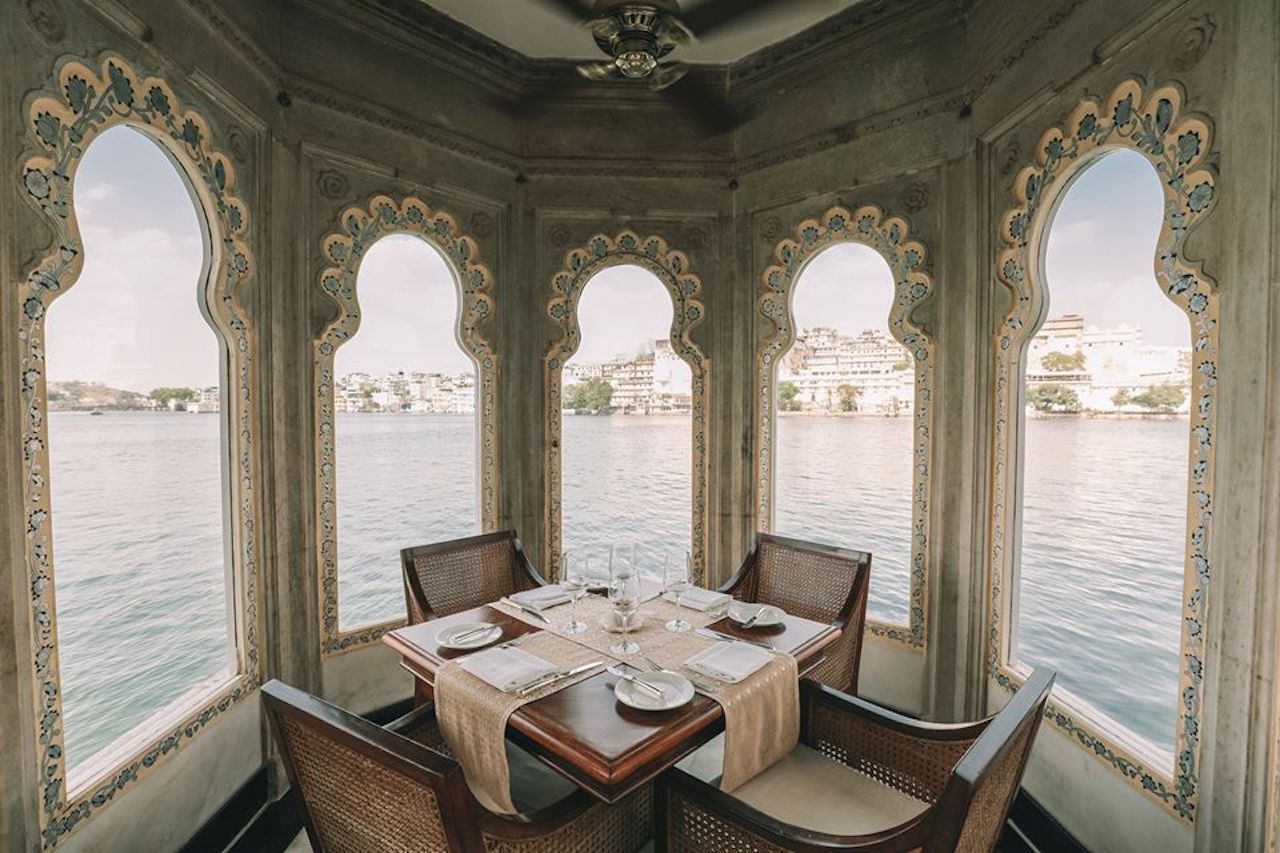 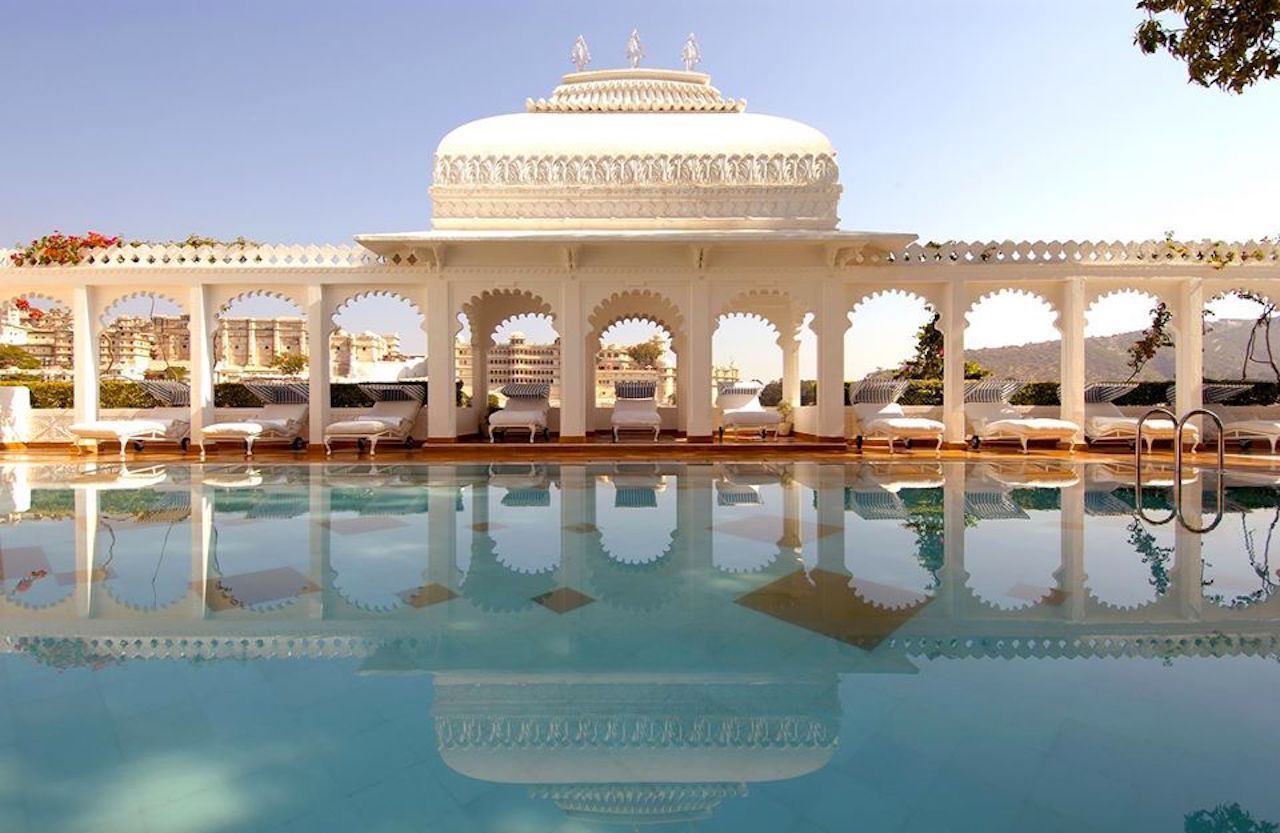 Taj Palace offers a range of facilities and services to provide entertaining experiences to its high-profile guests. The spa has a special boat experience with treatments that draw on the ancient and royal traditions of wellness in India. Guests can participate in the grand old soirees, which are recreated by the present royal family of Udaipur. The hotel offers airport transfers and sightseeing trips and shopping in vintage cars. Fireworks displays and private puppet shows can be arranged on request. There are daily performances of local dance and music. 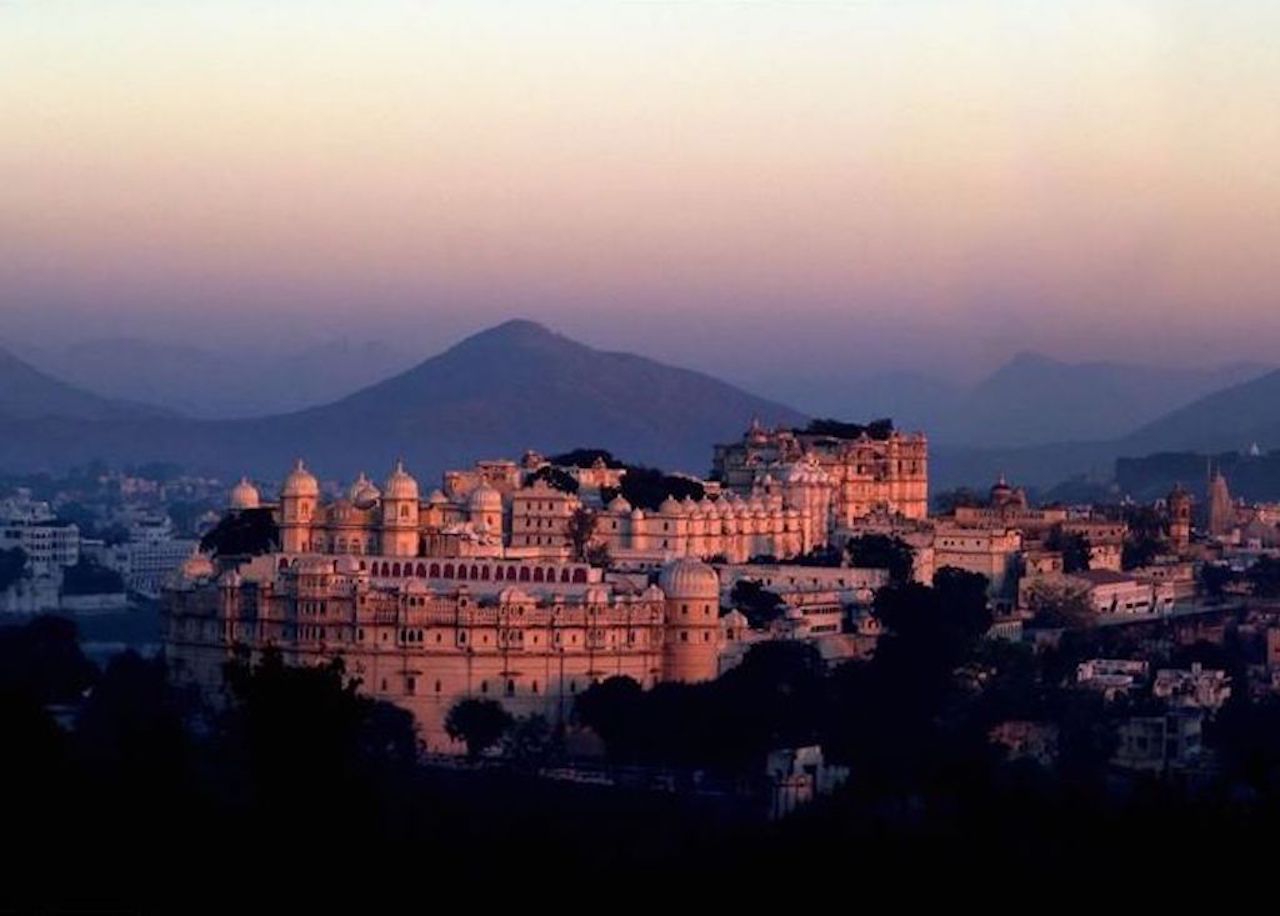 The Shiv Niwas Palace is a relatively recent construction by Maharana Fateh Singh of Mewar in the early 20th century. It was commissioned to house royal guests and other dignitaries. The royal guest house was transformed into a luxury hotel by the sons of the Maharana. 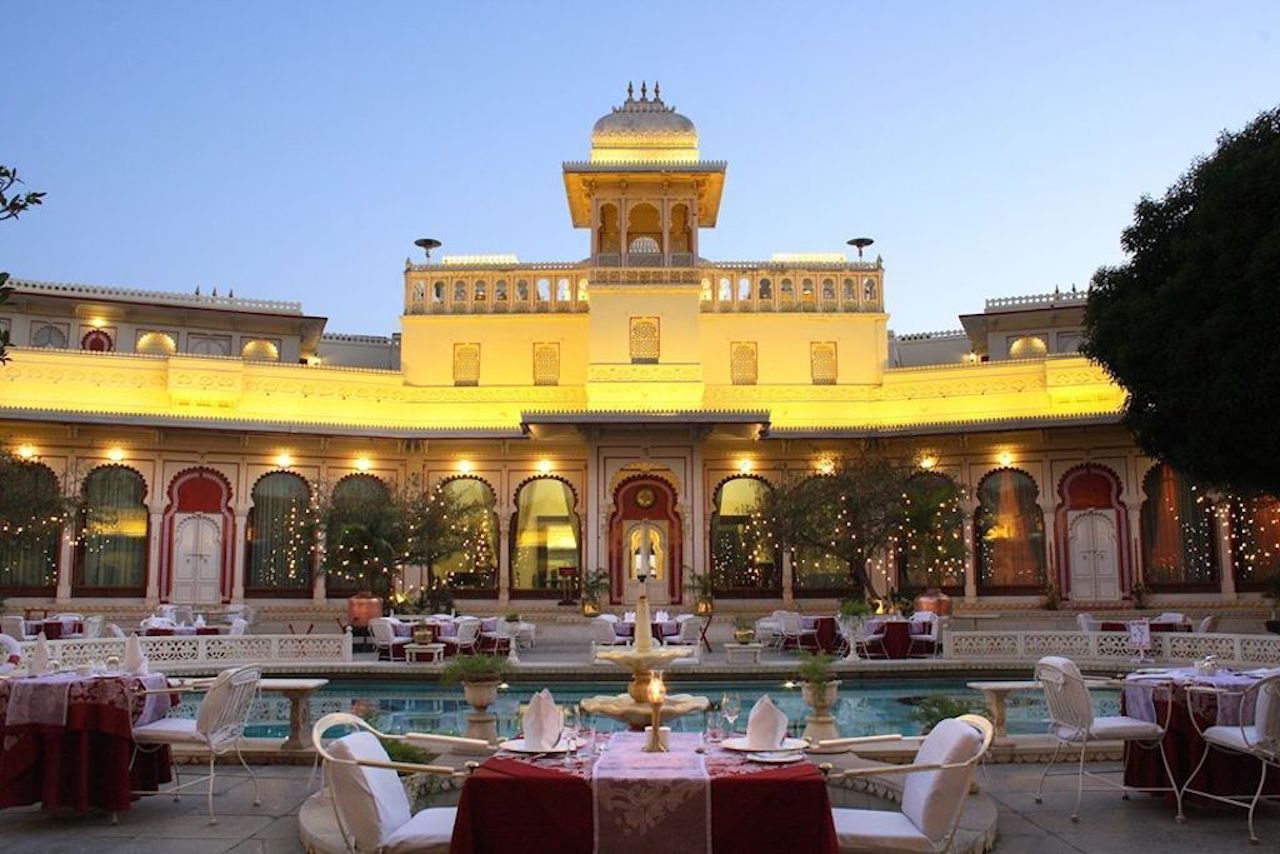 Shiv Niwas Palace has four restaurants. Paantya is a multi-cuisine restaurant, where guests feast on Mughal, Continental, Indian and authentic Rajasthani meals. Paantya has antique chandeliers, old latticework and original paintings from the school of Mewar. Panera is the bar of the hotel. Guests unwind under large chandeliers and among ornate mirrors.

The Pool Deck is an outdoor restaurant at the poolside. Here, guests can have light snacks in daytime and candlelight dinners in the evenings to the sound of light instrumental music. The poolside at night offers beautiful views of the lighted palace.

Shiv Niwas Palace offers many entertainment, recreation, and sporting options apart from arranging sightseeing tours. There are western bands and Indian classical music every evening. The hotel has a billiard room, squash courts, and horse riding grounds. Guests can also sail on motorboats on the nearby Lake Pichola. 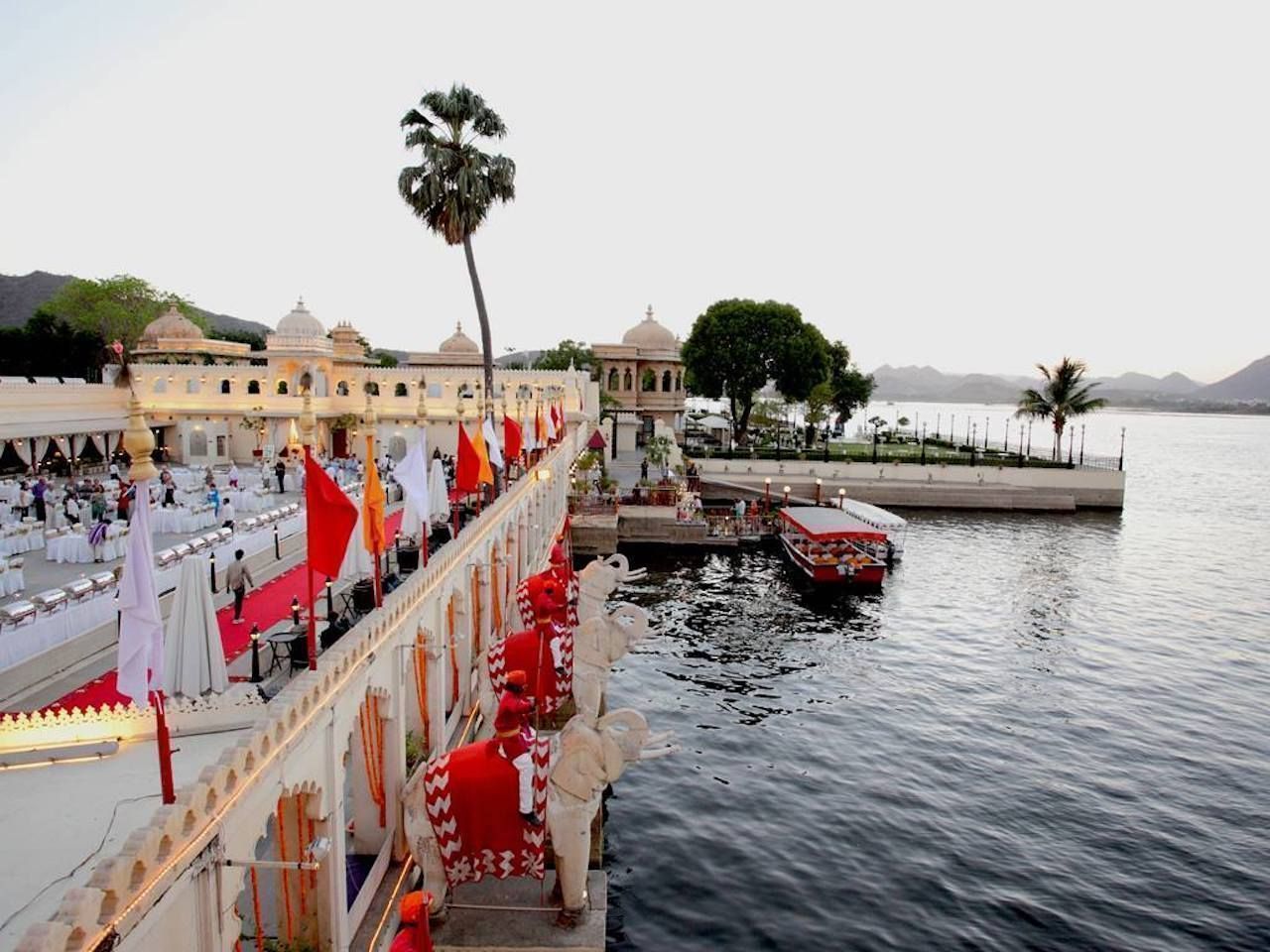 This is the palace that was coveted by prince Jagat Singh for his ladies, before he built Taj Lake Palace. But Jagmandir Island Palace has a historical significance that extends beyond Rajputana to the Mughal throne.

In 1623, Prince Khurram tried to rebel against his father, Emperor Jehangir, for succession to the throne but soon found himself on the run, along with his wife and his two sons. The then-ruler of Mewar, Maharana Karan Singh, gave him and his family refuge in a domed pavilion called Gul Mahal on one of two islands on Lake Pichola. After all was forgiven by Emperor Jehangir and prince Khurram became Shahjahan, Karan Singh’s son, Jagat Singh, expanded on Gul Mahal and gave the Jagmandir Island Palace its present appearance.

The Gul Mahal has an imposing dome that resembles a crown, and its interiors have marble walls inlaid with various precious stones. Jag Mandir, the main palace, was built around Gul Mahal and contains majestic halls, living suites, and interior courts in Mughal and Rajasthani architectural designs. 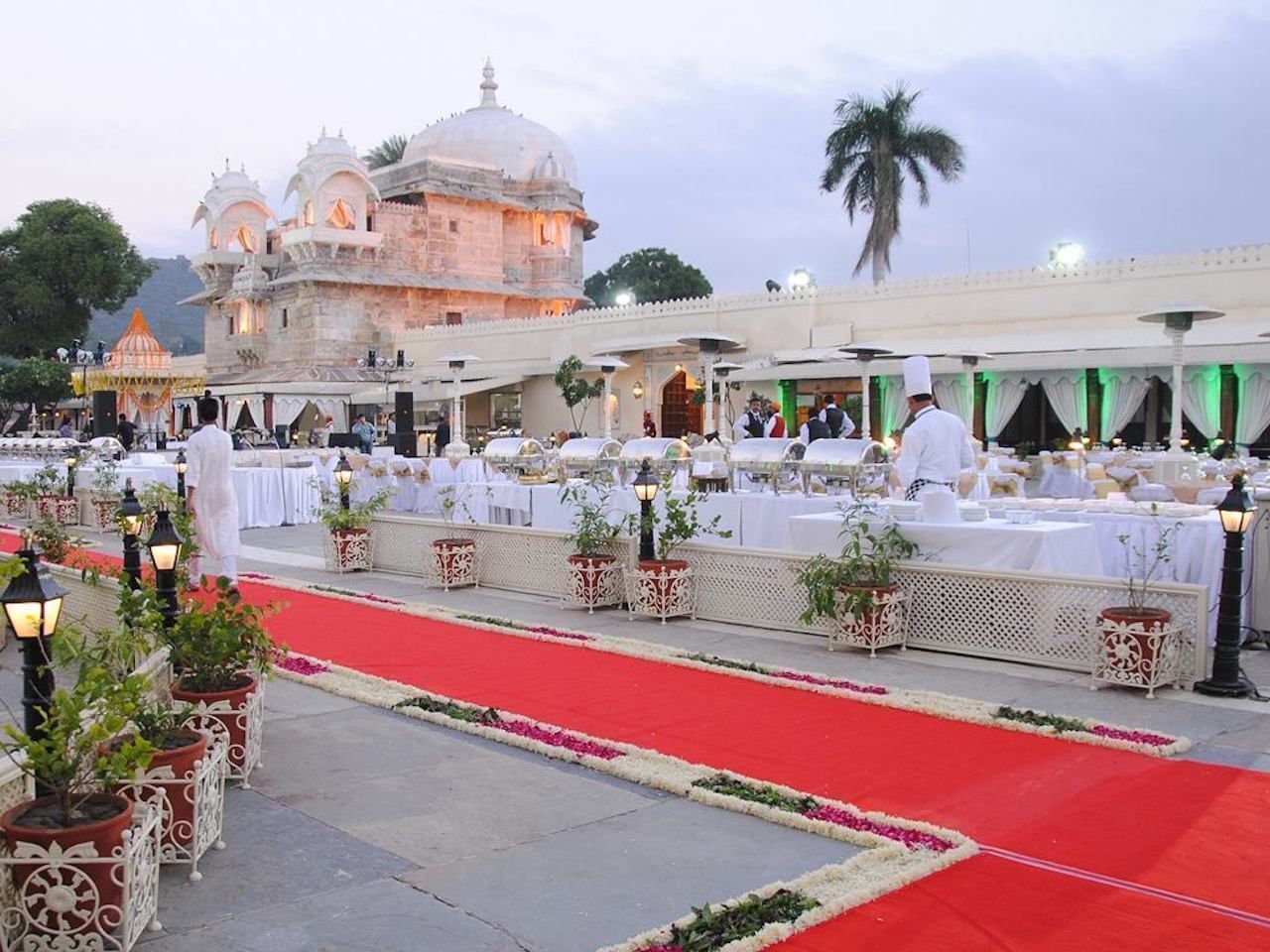 Jagmandir Palace has 10 magnificent, spacious suites. All the suites are furnished with royal upholstery, period furniture, grand chandeliers, and plush bathrooms. The colonnaded darikhana, or “place with many doors,” serves Indian and international cuisine with a signature four-course dinner. Picholi Bar, named after the nearby village of Picholi, is a well-stocked watering hole where guests enjoy premium spirits, cigars, and delicious snacks. There are daily folk dances and musical performances. 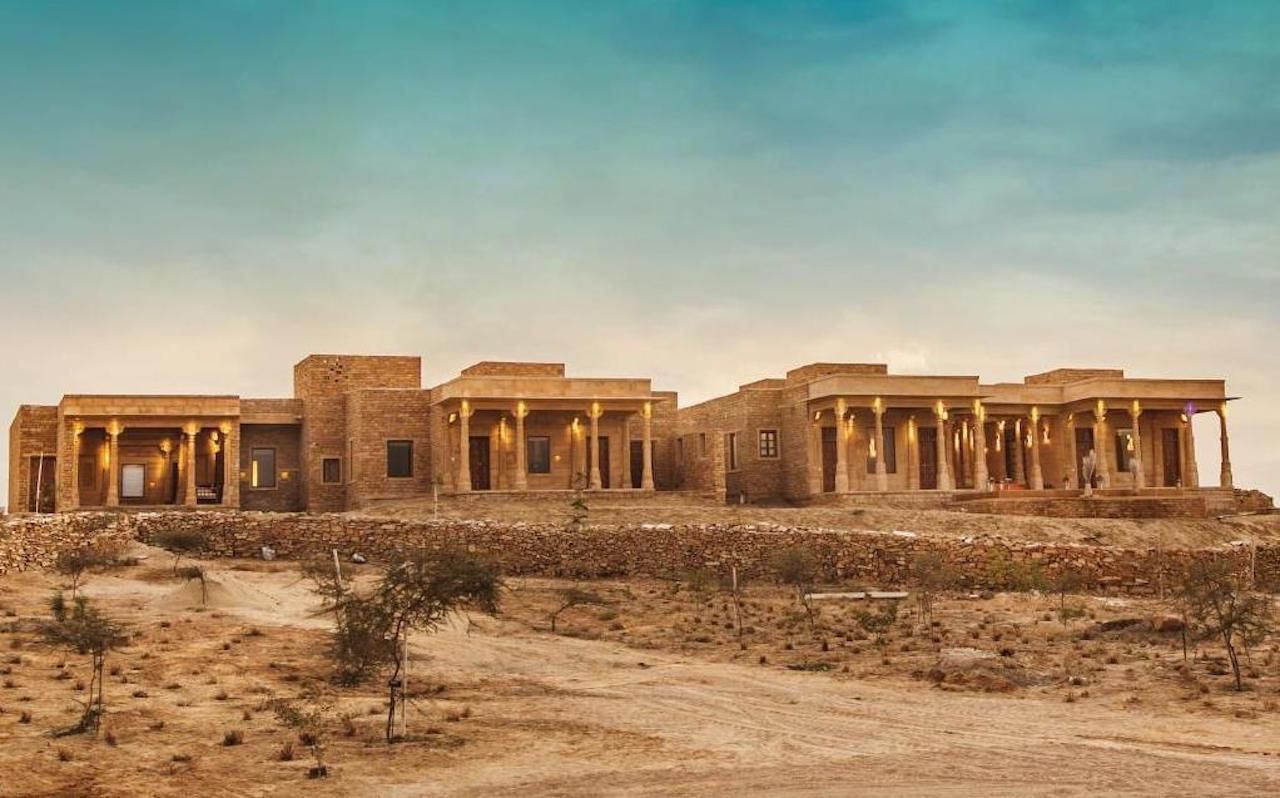 Suryagarh Haveli is an imposing palace fortification, which stands in the middle of the Thar desert. The fortress hotel is a beautiful blend of contemporary luxury and historic rusticity. It is built in the Rajasthani architectural style, with turrets, ramparts, arches, and pillared halls surrounding the grand courtyard. The royal experience starts with a traditional welcome at the hotel, which includes a small dance performance.

Accommodations include 62 suites and rooms, including standalone havelis within the compound walls. All the apartments are designed with luxury in mind with ornate chandeliers, marble flooring, and exquisite upholstery. 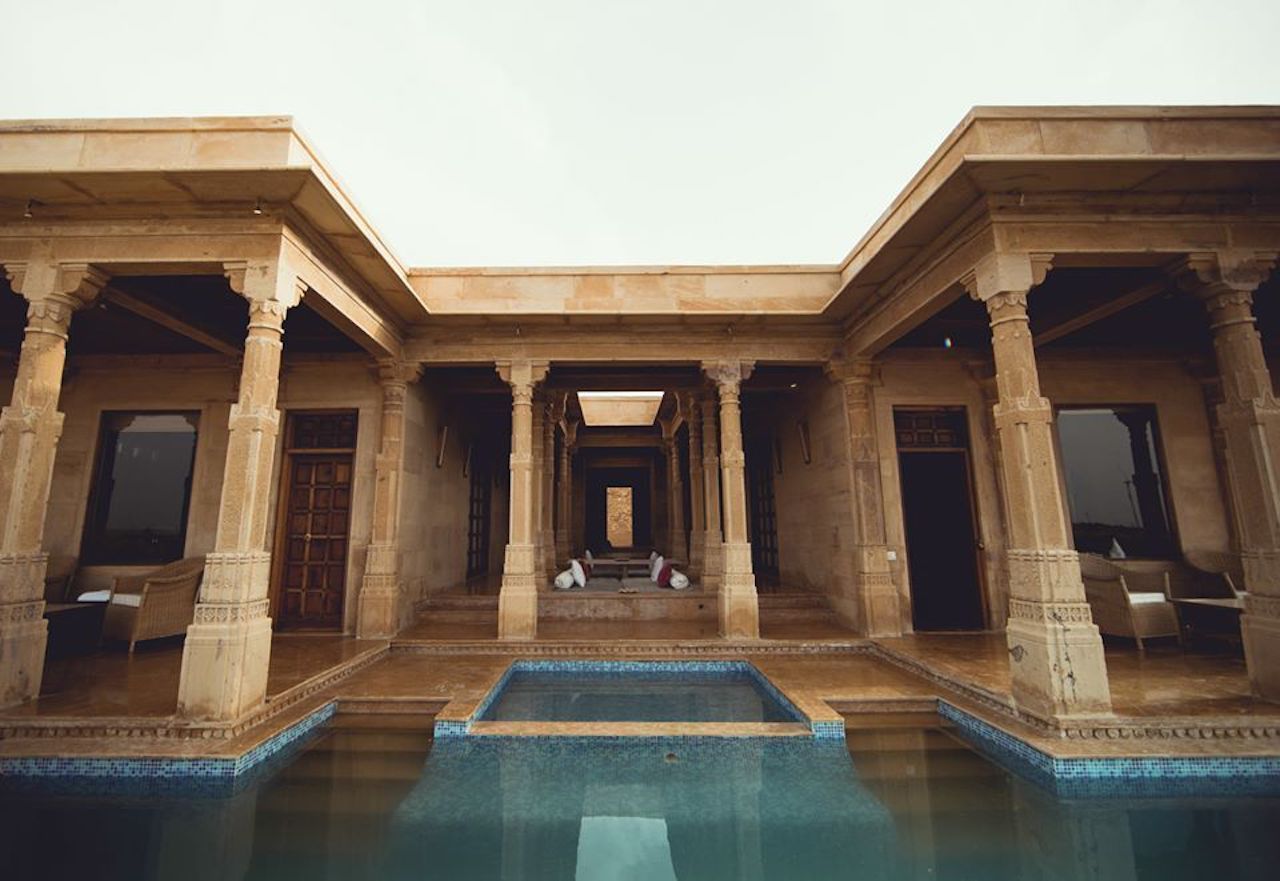 While the haveli itself has three restaurants, the hotel has several outdoor dining options. The signature restaurant Legends of Marwar is devoted to the culinary heritage of the region. Draksh is the royal watering hole, serving premium international spirits under amber lights and within gold-speckled white walls.

Suryagarh Haveli is celebrated for the experiences it provides to its guests, which include several tours. Jaisalmer was a trading center on the silk route from the 16th to 18th centuries, and the trail can still be visited. Thar Exploration takes you through a dramatic landscape of scrubland, traditional villages, ruined caravanserais and ancient cemeteries. The Great Indian Bustard Trail is within the Desert National Park and the sanctuary of a once-thriving magnificent bird, which is now on the cusp of extinction. The number of bustards has come down to around 250 due to hunting and loss of habitat. Bird-watchers can also spot sand grouse eagles, quails, drongos, falcons, and demoiselle cranes.

Other entertainment options include displays of traditional sword fights and music and dance performances. A unique activity at the hotel is the lessons it provides in textile art. 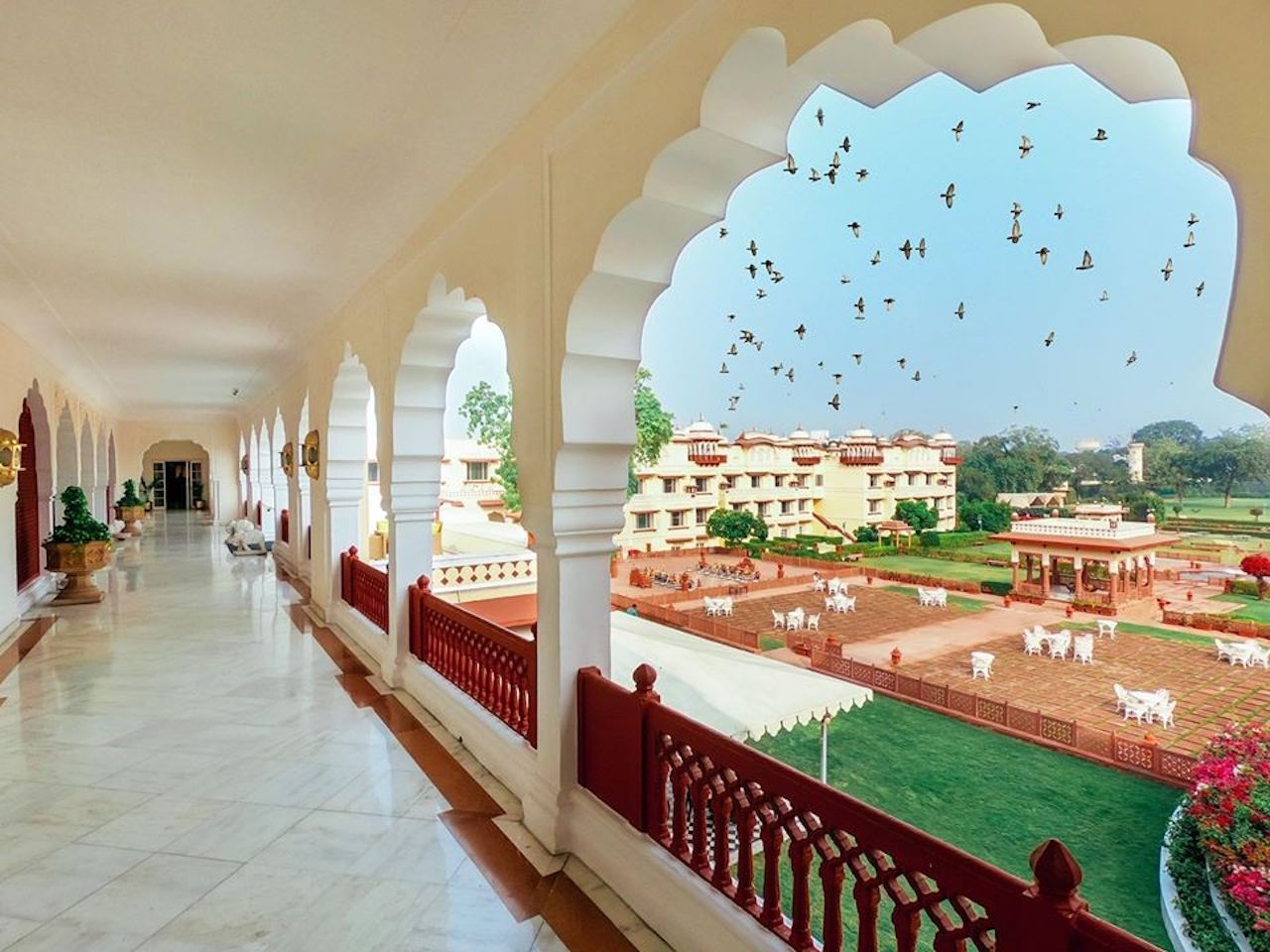 Commissioned in 1754, Jai Mahal Palace is a classic example of Indo-Saracenic architecture, an Indo-Gothic style used mainly by British architects in India. Located among 18 acres of landscaped Mughal-style gardens, this palace was originally the residence of Prime Ministers of the Jaipur state.

Jai Mahal Palace has 94 luxury rooms and six thematic suites. The opulent interior decor of the suites and rooms is complemented by historic furniture, Rajasthani design motifs, and miniature paintings. Deluxe rooms have luxurious interiors and offer views of the Mughal Gardens and the capital city. Rooms billed as Luxury Rooms do not disappoint and offer magnificent views of the gardens, swimming pool, and the city. Some luxury rooms have private sit-outs overlooking the lawns and the pool. 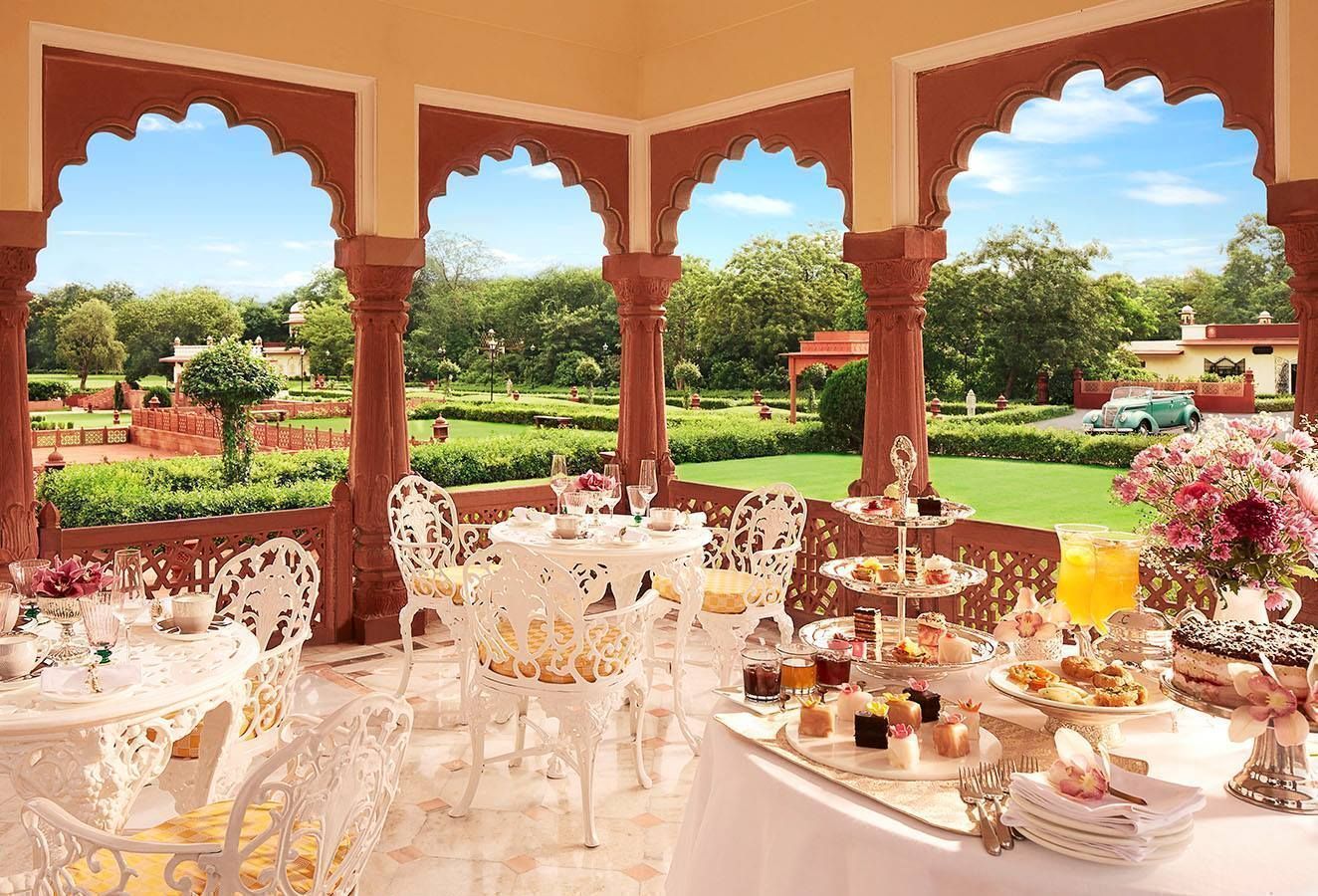 Jai Mahal Palace has an assortment of dining venues from formal dining to casual snacking. All eateries offer a range of cuisines, beverages, and drinks. The Cinnamon has Rajput architecture and interiors and was the official dining chamber of the prime ministers of Jaipur state. The restaurant specializes in traditional and modern Indian cuisine.

The Marigold Bar is stocked with a wide range of prized international and Indian liquors and wines. The bar also serves exclusive single malts and choice cigars. As the name suggests, La Patisserie is an elegant bakery that serves freshly baked pastries, cakes, breads, and cookies. La Patisserie also serves espresso and coffees from choice plantations in India along with a range of teas from all over the world. 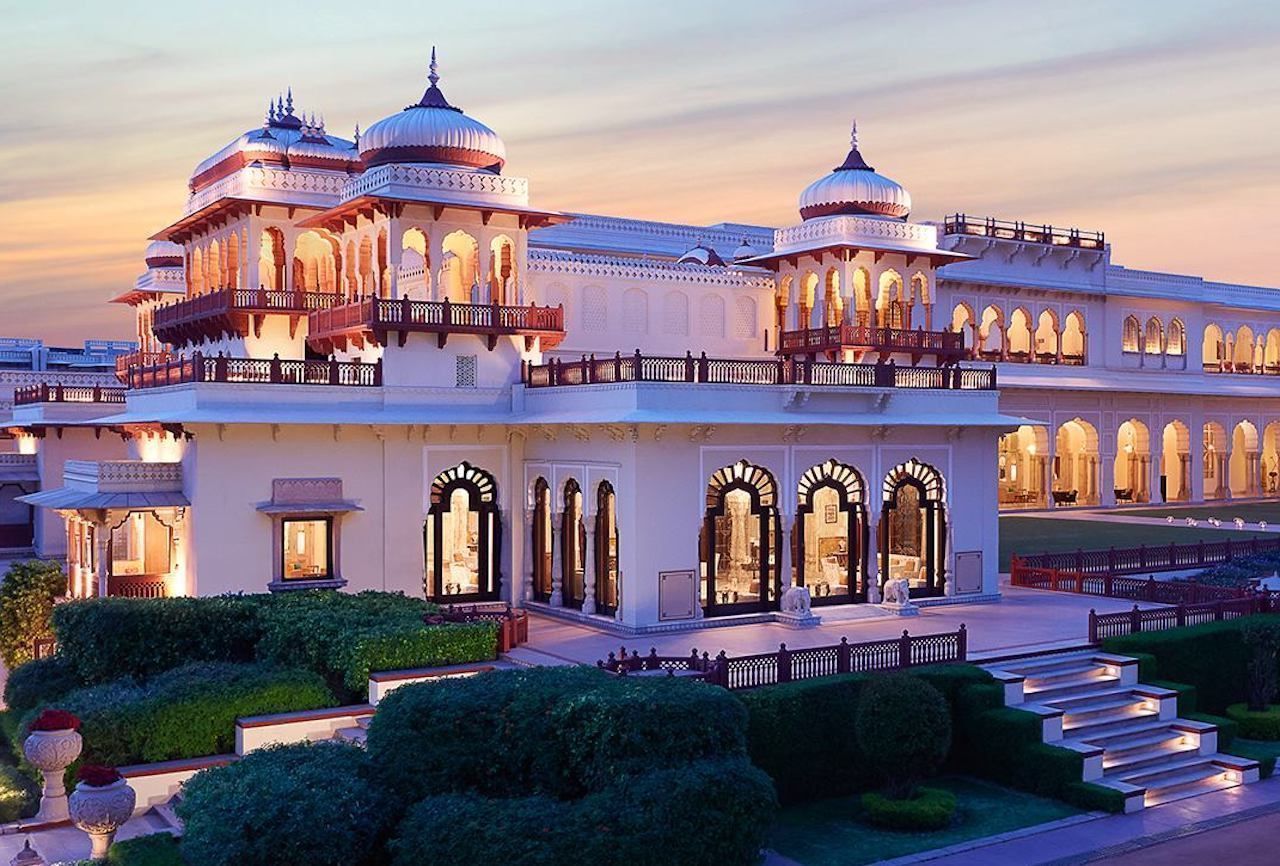 Built for the Jaipur Queen’s favorite handmaiden in 1835, Rambagh Palace was converted into a luxury hotel in 1957. Rambagh Palace has 78 opulent suites and rooms. Retaining its original splendor, the Rambagh Palace hotel is adorned with hand-carved marble latticework, sandstone balustrades, cenotaphs, and cupolas. The palace is surrounded by landscaped Mughal Gardens covering 47 acres. 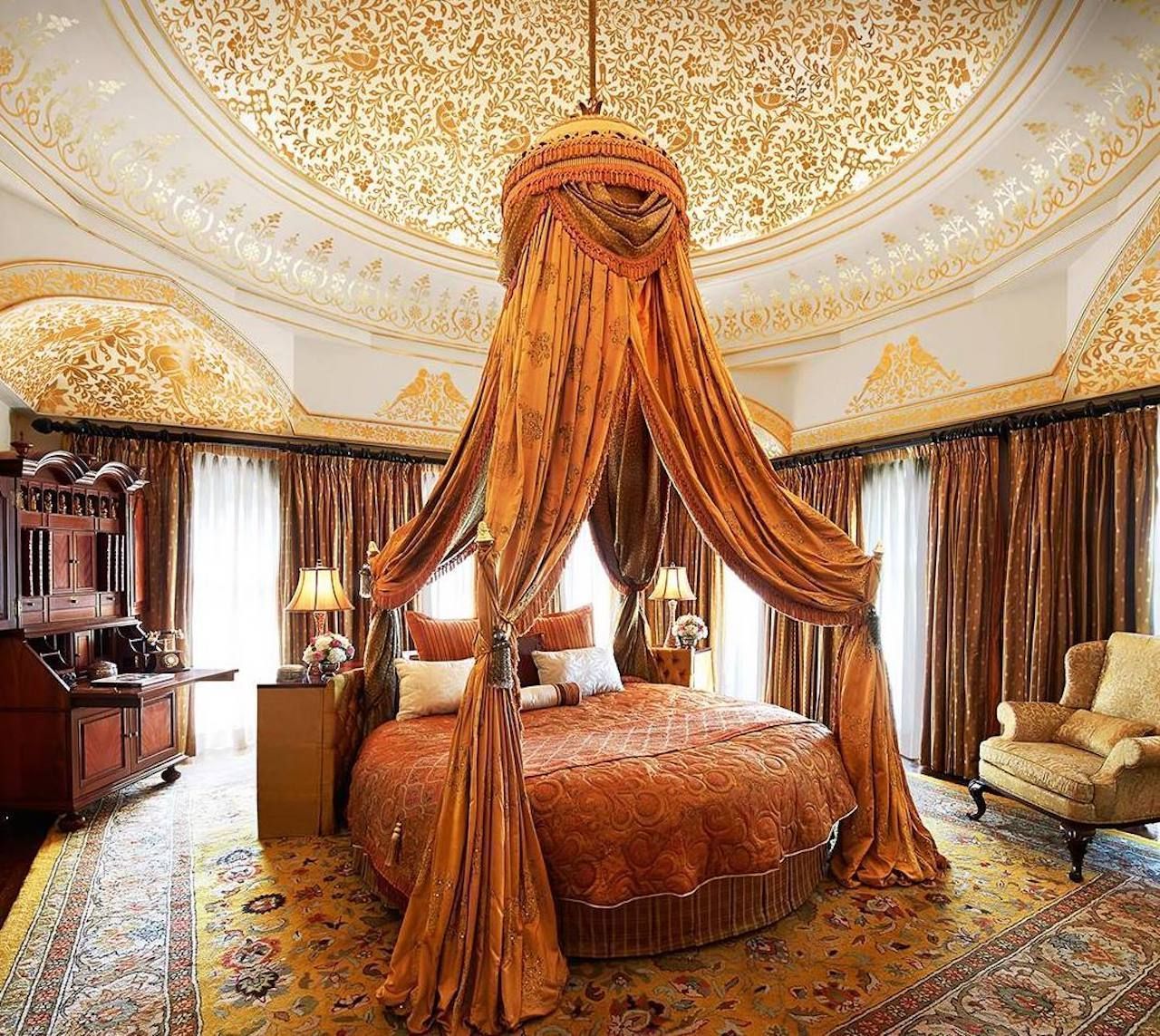 Rambagh Palace has five elegant and ornate dining rooms. The Rajput Room reflects Rajput interior design and offers a multi-cuisine menu. Suvarna Mahal, or Gold Palace, is located in th palace’s original banquet hall and specializes in Indian cuisine. Verandah Cafe specializes in al fresco dining and serves Indian and continental cuisine. At the Polo Bar, guests unwind with drinks and cigars. There is even a restored steam train that has been turned into a Victorian-era restaurant where guests can enjoy fine liqueurs, snacks, and wood-fired Italian pizza.

Guests of Rambagh Palace take airport transfers and city tours only in vintage cars. The hotel has a polo ground where guests can watch or play polo. There is also a golf course along with a walking trail, fitness center, and yoga pavilion. The Jiva Grande Spa exclusively provides Indian wellness remedies. There are indoor and outdoor swimming pools along with facilities for croquet and table tennis. 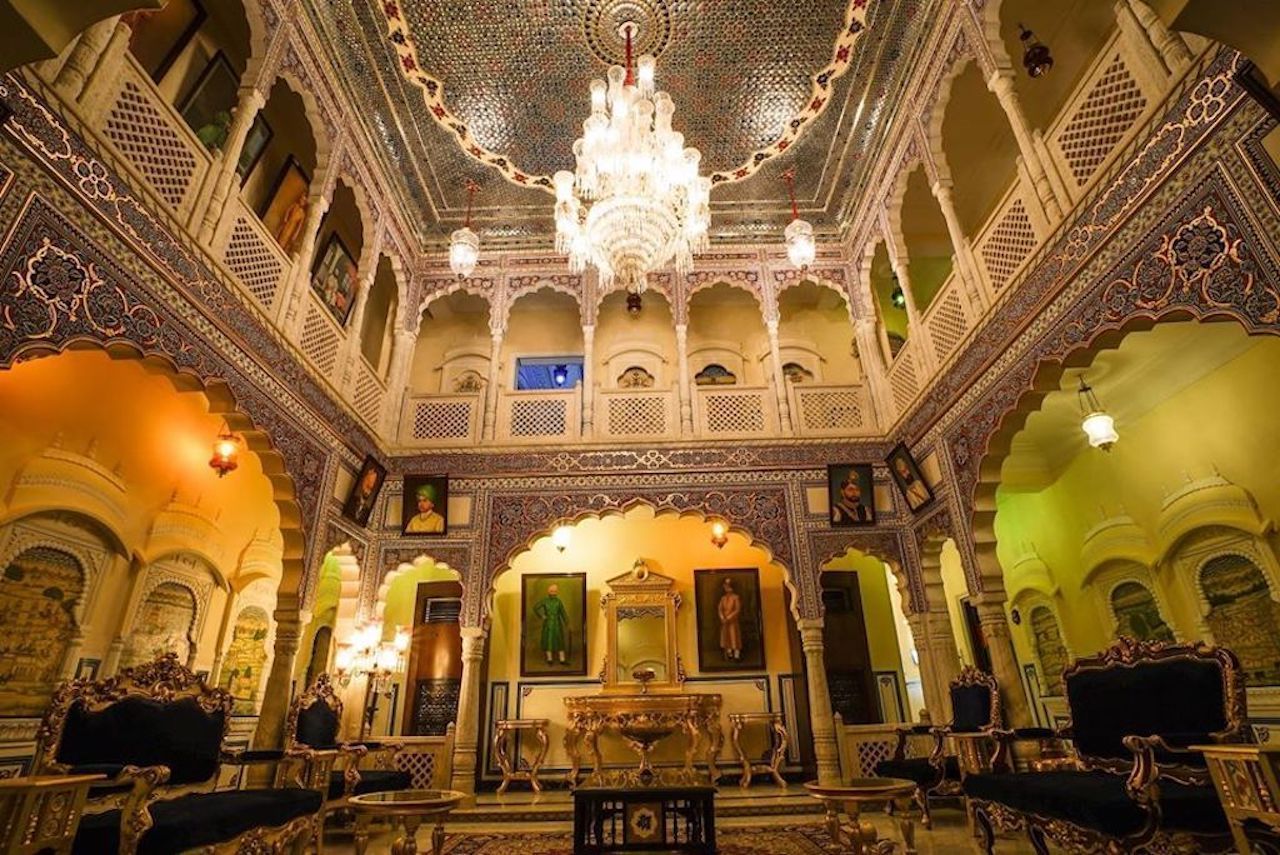 Shahpura House was built about 200 years ago in Jaipur by the Shekhawat clan of Rajputs. Over the years, it underwent major extensions, therefore the palace is an amalgamation of Rajasthani, Mughal, and other Indian architectural styles.

Shahpura House has 65 luxury suites and rooms with classic Rajput interiors. Shahpura Suite is the Presidential Suite of Shahpura House. It has antique furniture with rich upholstery and walls decorated with marble and semi-precious gems. The suite has its own terrace with exclusive views of the city, and a private elevator. The Royal Suites also have period furniture along with regal interior decor. The rooms have private balconies adorned with mirrors and goldwork. 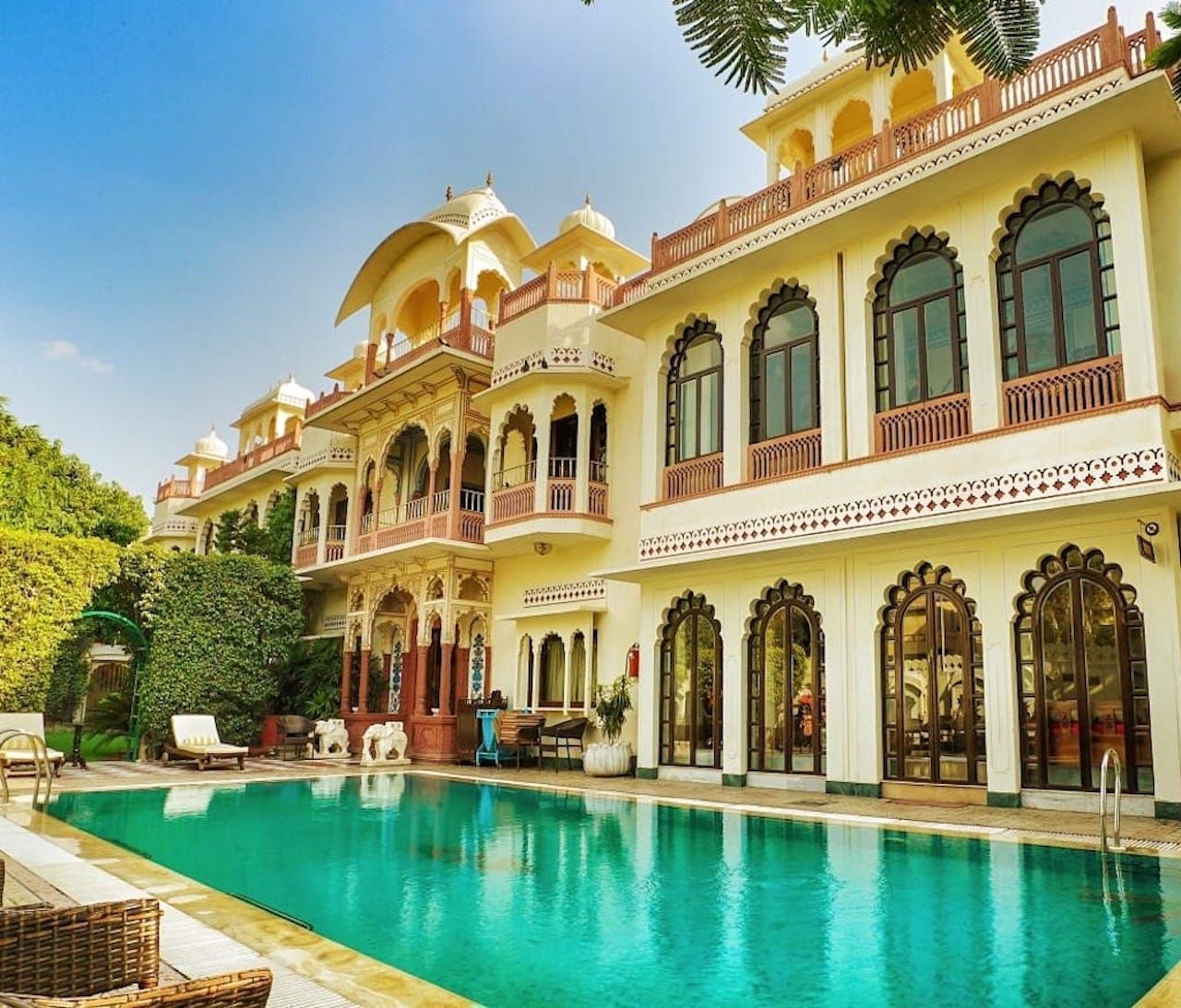 Guests are entertained with cultural programs, jeep and camel safaris, horse buggy rides, and puppet shows. The hotel has an outdoor swimming pool.

TravelThe Best Place To Go in India for Every Type of Traveler
Tagged
Art + Architecture Lux Travel Epic Stays
What did you think of this story?
Meh
Good
Awesome

Notes From the Jaipur Literature Festival

The People We Meet Along the Way: Rajasthan

These Are the Love Lessons You Learn in the Desert

Gurus, Gods & Camels: Notes From Inside the Images