When it comes to raising glasses, a majority of cultures lean toward an alcoholic drink. In France (and most of the Western world), it’s Champagne. In Chile, it’s terremoto. Closer home in Ethiopia, they drink a type of honey wine called tej to celebrate. In Kenya, however, the beverage table at parties looks quite different.

Traditionally, only elder men had access to alcoholic beverages, and even then, they usually never drank more than two horns — an amount equivalent to the size of a Champagne flute. Subsequently, non-alcoholic drinks are much more widespread and popular, even on special occasions. Although modern-day celebrations are awash with soft drinks, there are still a few Kenyan tribes that hold on to their traditions.

In communities from the Eastern and Central regions that neighbor Mountain Kenya, their drink of choice is gruel, a smooth fermented porridge of medium viscosity. Also known as ucuru, gruel has a sour taste and is ideally enjoyed cold with or without a sweetener additive, such as honey. The name might not sound appealing to many, but this drink was once at the center of celebratory occasions in Kenya. Here’s what you need to know about gruel.

How gruel is made

Traditional gruel recipes call for a mixture of maize, millet, or sorghum. Today, you will still find communities that incorporate all three ingredients. But the most common type of gruel is made from maize.

The preparation starts with soaking the grains in water. The wet grains are then ground using a metate, similar to a mortar and pestle. The difference is that mortar implement is the shape of a concave tabletop rather than a bowl. 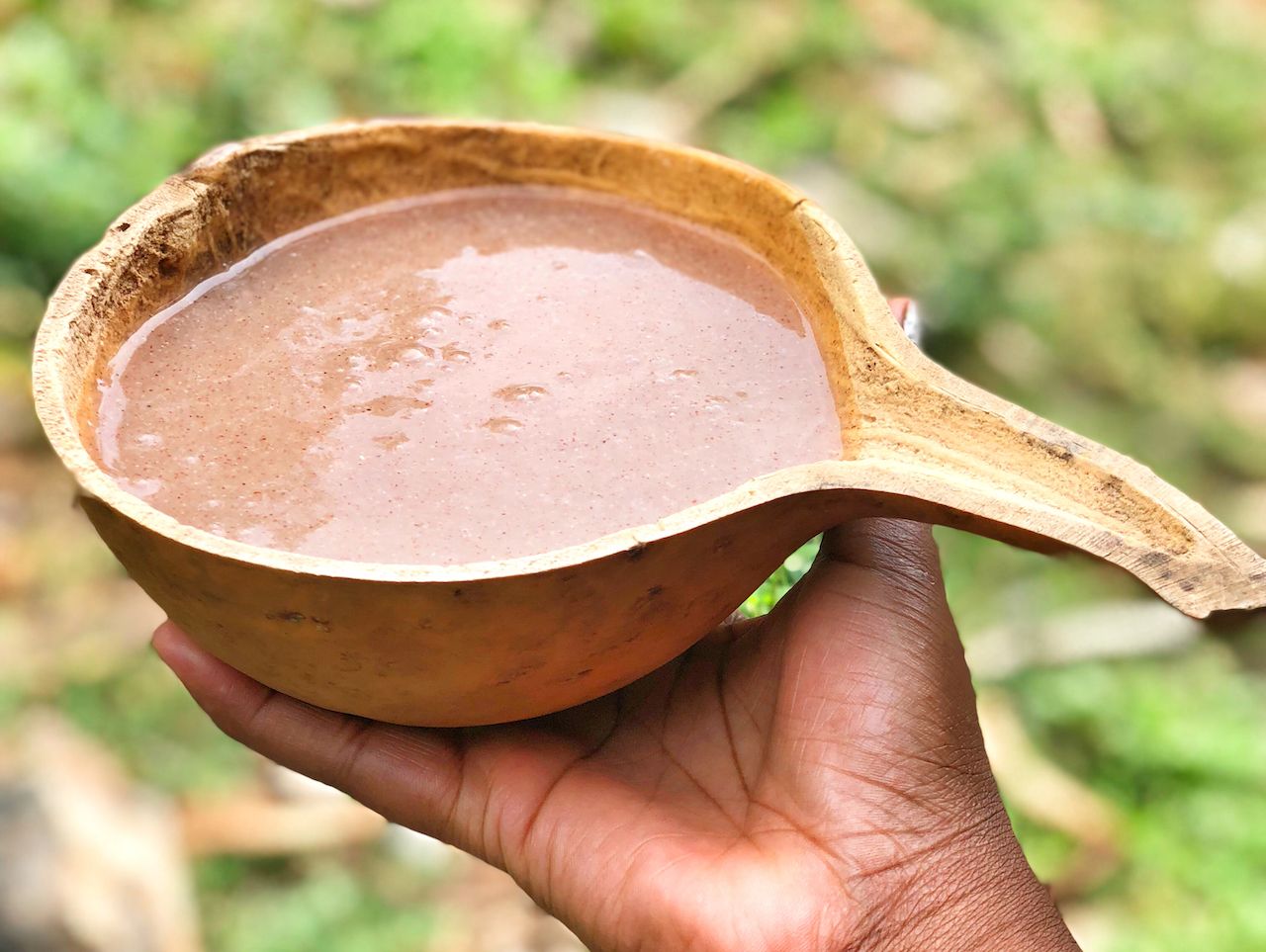 The process is easy enough but requires plenty of energy. First, the grain must be finely mashed on the surface of the metate. The mashed grains are then placed in a separate container. Once that process is finished, the porridge can be prepared over a fire.

Today, charcoal burners are a common substitute for traditional three-stone fireplaces. The mashed grains are placed in a pot of boiling water and left to cook for at least 10 minutes. The cooked porridge is then transferred to a gourd and left to ferment for a week. Once fermentation is complete, the gruel is served directly from the gourd, like a calabash, or bottle gourd. However, in many modern homes, gruel is enjoyed from regular dinnerware.

A celebratory and practical drink

Gruel is served during festive and somber events alike, including births, weddings and during the harvest season. Farmers packed lunches that usually included gruel, which is available all year-round. The cold drink quenched the thirst of laborers working outdoors in the sun for hours at a time, and travelers often carried a gourd of gruel to help them stay hydrated on long journeys.

During the harvest, families would enjoy a hot meal waiting and a calabash of cold gruel after a long day of work. If the harvest yielded healthy and abundant crops, some villages held thanksgiving celebrations, serving gruel to the party guests.

Naming ceremonies for newborn babies would attract guests from adjacent villages and relatives from far and wide. As peopled danced and songs filled the air, gruel would be served while elder men would enjoy a horn or two of local brew to bless the child. Gruel found its way to marriage ceremonies too, when the bride’s relatives were expected to prepare gruel to welcome the groom to their family. Women from both families would make the gruel for the wedding, and when it came time for the bride to walk to her husband’s village, she brought gruel along as nourishment for the journey.

Though these traditional ceremonies and practices are dwindling in popularity, gruel was once a pillar of tribal life in Kenya. Rarely mass-produced, gruel is a homemade drink that represents ties between local communities and families. A sip of fermented porridge straight from the gourd is a reminder of happy times — bountiful harvest and new babies — and will hopefully remain a cherished tradition in Kenya for generations to come.

Food + Drink8 Essential Dishes To Understand the History of Kenya’s Swahili Coast
Tagged
Food + Drink Kenya
What did you think of this story?
Meh
Good
Awesome