Beach cities, right? Toes in the sand, salt on your skin, eating nothing but fresh seafood — it’s a pretty awesome recipe…but it’s also pretty generic. You could find that experience in a thousand different places.

And then there’s Virginia Beach. Unlike most other coastal destinations, it’s also got history — so when the SPF runs out, the list of things to do definitely doesn’t. Soak up the sun and sand, definitely, but leave time to explore Virginia’s deeper story. Here’s how. 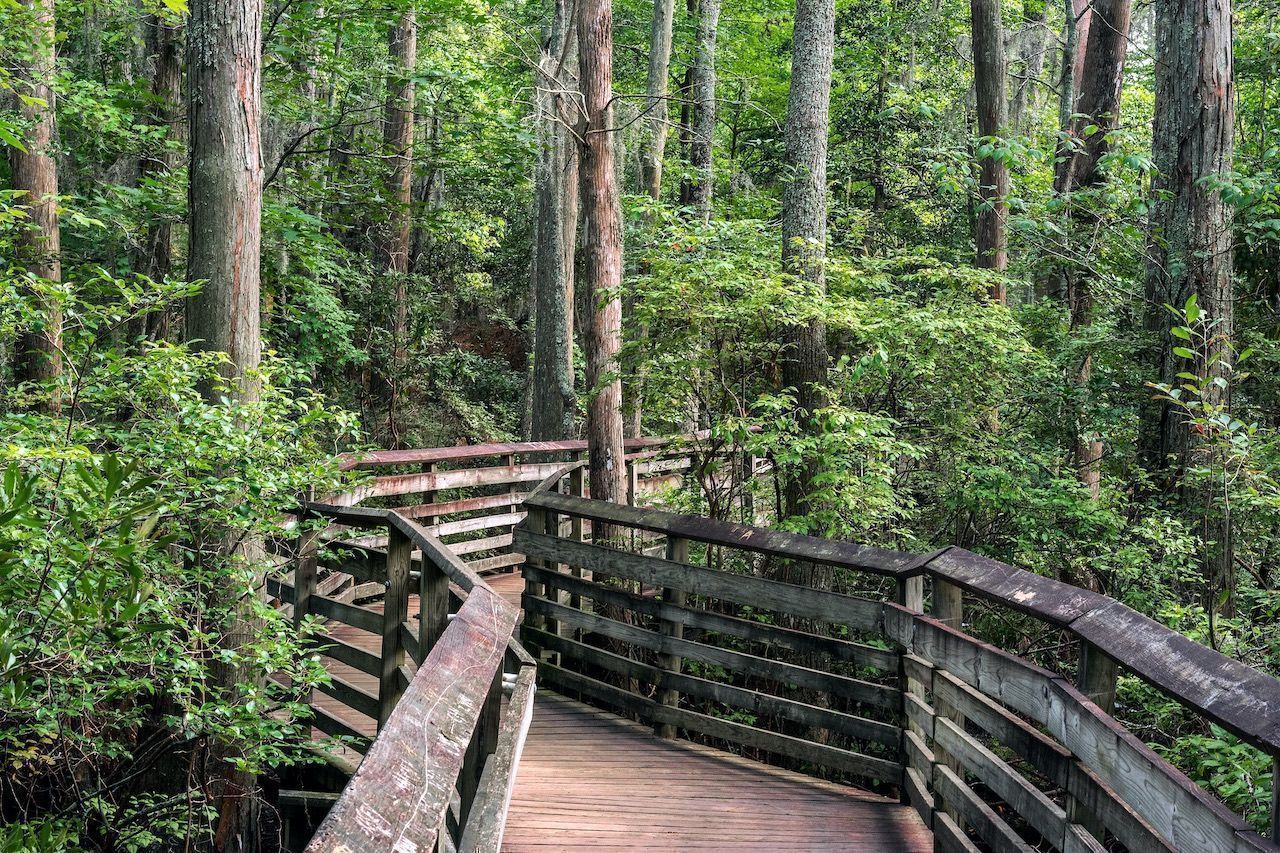 The landing spot of the first European settlers of America in the early 1600s? That’s right here. Where Christopher Newport and his men first beached their ships is near what today is the state’s most popular state park, with over a million visitors a year. First Landing was — appropriately — the first state park in Virginia, too.

Spanning over 2,800 acres adjacent to the Chesapeake Bay and taking up most of Cape Henry, First Landing is huge. There are 20 cabins, over 200 campsites, a mile-long beach for fishing and swimming, and 19 miles of nature trails for hiking and biking (you can rent bikes onsite so you don’t have to lug yours here).

If you’re looking to experience the most history-packed bits, check out the Cape Henry Trail — it includes several reproduced Native American structures spread along a one-mile section. (You’ll get more out of your trek if you grab a pamphlet from the visitor center.) And for awesome photo opps? Bald Cypress Trail, on the northern edge of the park.

Stop #2: The Legends Walk at the Virginia Beach Oceanfront 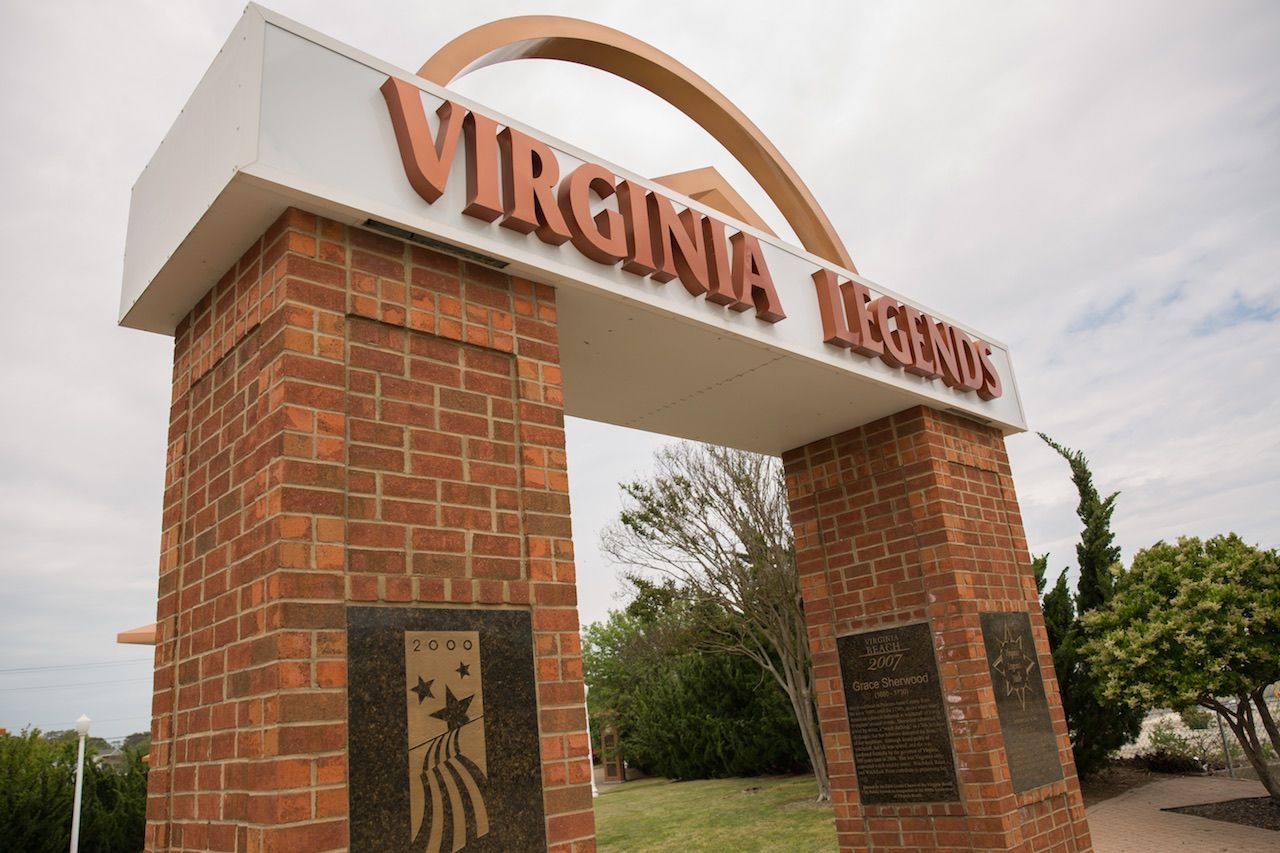 Head on down to Atlantic Avenue and take a stroll along the Virginia Legends Walk (when you’ve reached the large brick arch topped with bold “Virginia Legends” lettering, you’ll know you’re in the right place). You’re already going to be on the ocean anyway — might as well add “famous Virginians” to your arsenal of trivia-night knowledge.

As you make your way through the outdoor walk, good luck not comparing these legends to those of your home state. We’re talking claims to George Washington, Pocahontas, Edgar Allan Poe, Ella Fitzgerald, Arthur Ashe, and dozens of others. Despite the number of famous names, the walk doesn’t take too long — if you’ve got time to spare, meander down the boardwalk for the Navy SEAL monument, Norwegian Lady Statue, and the Naval Aviation Monument, too.

When it comes to famous lighthouses, Cape Henry is definitely on the podium. Erected way back in 1792, it was the country’s first federally funded lighthouse, overseen by Alexander Hamilton and authorized by George Washington. Today, its stunning brick exterior stands tall inside Joint Expeditionary Base Fort Story, which is just south of First Landing State Park.

The lighthouse experience — it’s definitely an experience — is had via a self-guided tour, so you can move at your own pace up the old-school spiral staircases and ladders. Once you make it to the “summit,” you’ll get 360° views of Virginia Beach, including beyond the coastline. And if you start singing, “God help and forgive me, I wanna build something that’s gonna outlive me”…that’s allowed. 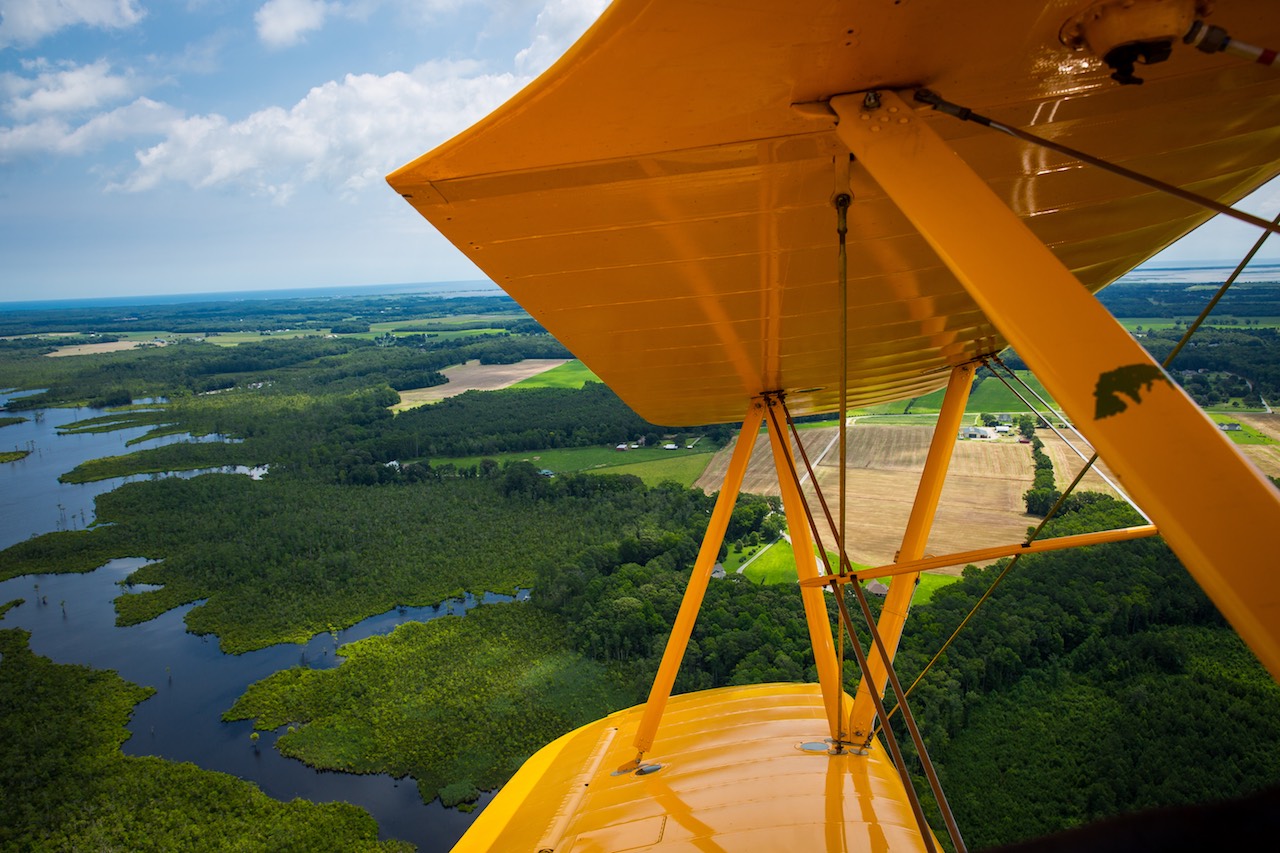 This may sound like a niche thing, but don’t write it off just yet. The Military Aviation Museum stores one of the world’s most remarkable collections of WWI- and WWII-era military aircraft and features a fully restored control tower from America’s first air base in England during WWII — the only one of its kind in the United States. As you’re guided through the indoor aviation exhibits (by super-passionate volunteers), you’ll gain some serious appreciation for the art of flight and the country’s aviation evolution.

And then comes the mic drop: The Military Aviation Museum understands that you won’t get the full experience by merely observing the plane collection, so you’re welcome to step out back and hop aboard a flight in one of the authentic, refurbished planes. An actual flight, in an actual vintage machine.

The open-cockpit experience is basically a trip back in time. You certainly don’t have to be an aviation enthusiast to enjoy the city from above — or a pro photographer to get some great shots. 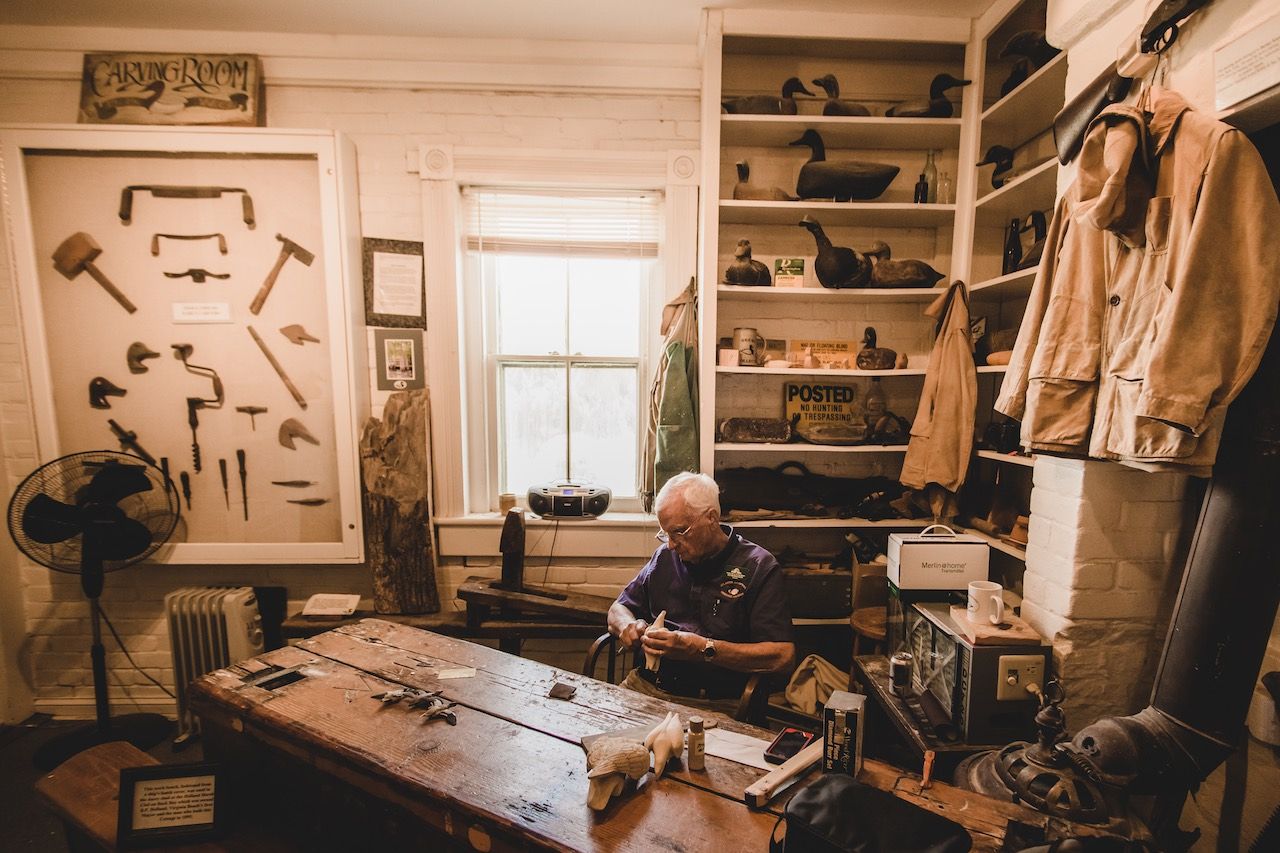 The 12th Street Boardwalk is where you’ll find the historic DeWitt Cottage, the oldest structure within the resort area (circa 1895), and now home to the Atlantic Wildfowl Heritage Museum. A good introduction to the flora and fauna of the area — and very budget-friendly — the museum is a giant grab-bag of wildfowl artifacts, hand-carved decoys, and local artwork. Many of the displays focus on the Atlantic Flyway (a huge migration route that passes over Virginia Beach) and its migratory wildfowl.

The volunteer staff is extremely knowledgeable — if you’re lucky, you’ll catch some hard at work hand-carving decoys during your visit — and can point you to the area’s best spots for wildlife once your museum tour is complete. With their tips in hand, hit up Back Bay National Wildlife Refuge, and put your newfound knowledge to the test.

Beaches themselves have history, too. Housed in an original Life-Saving Station built on the beach in 1903, the Virginia Beach Surf & Rescue Museum is an old-school homage to local coastal history. You’ll get the scoop behind the boardwalk, famous surfing icons and lifeguards, coast guard units, and the legendary storms that literally helped shape this coastline.

You can opt to experience the museum on your own or have one of the volunteers guide you through. But an insider tip? It’s always better to go the guided route. 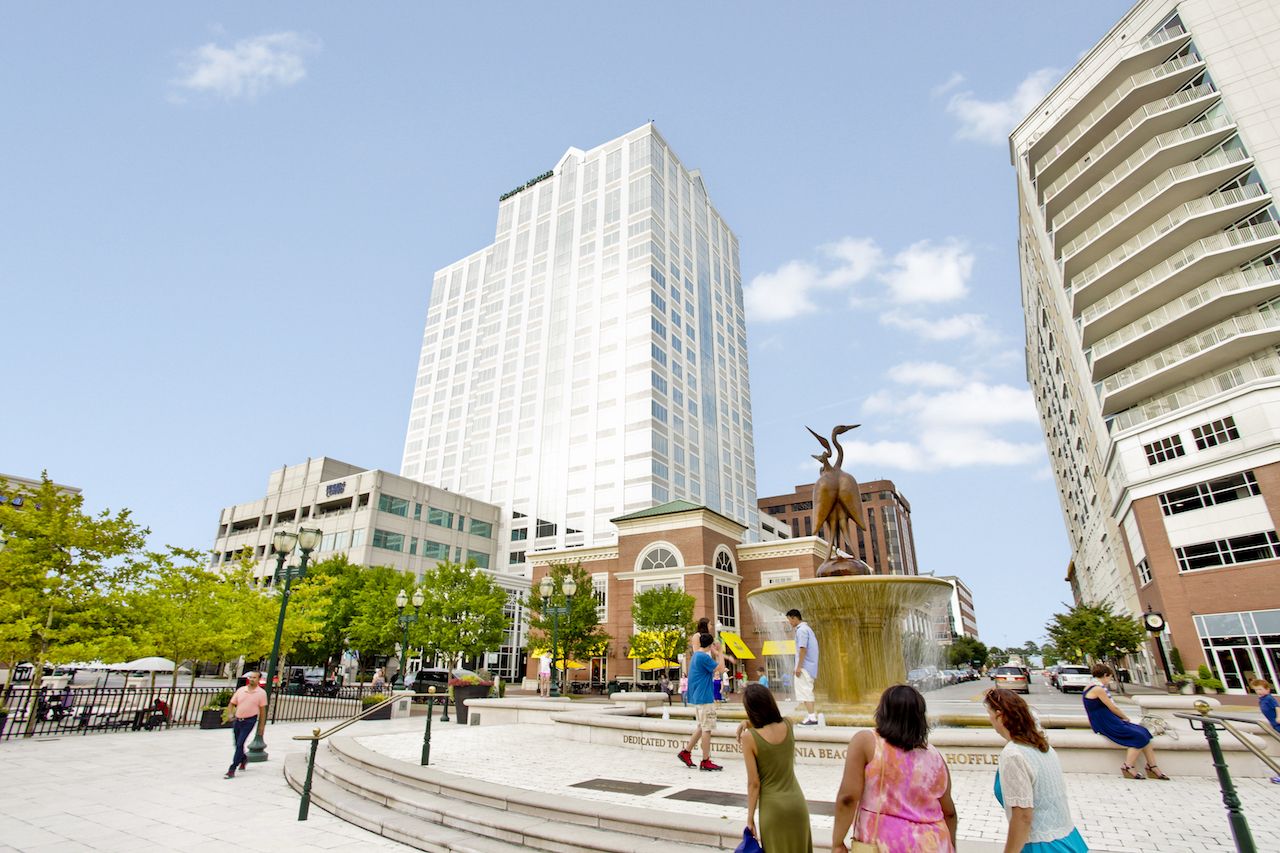 Once occupying a brick-and-mortar location in nearby Portsmouth, the Virginia Sports Hall of Fame has now turned its extraordinary assortment of Virginia’s sports memorabilia into a collection of displays all across Virginia Beach’s Town Center. (This is also where you’ll find downtown events and all the best shopping and restaurants.)

The free pedestrian tour is the ultimate rundown on Virginia’s most influential sports figures, including coaches, athletes, contributors, and media figures. The tour’s corresponding mobile app is a handy guide to help you test your knowledge. 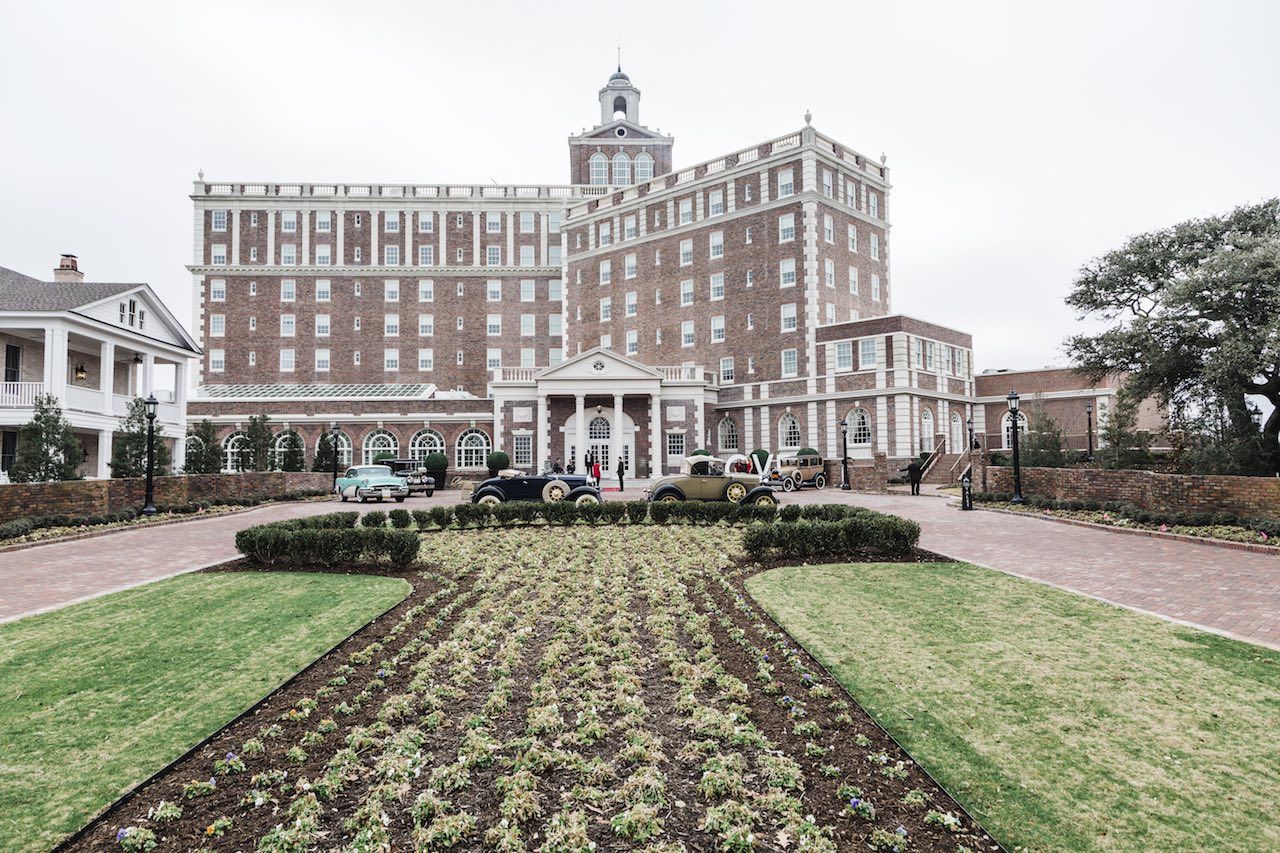 Known as the “Grand Dame of the Shore,” the Cavalier Hotel, built in 1927, is a straight-up icon. Sitting high on a grassy hill at the edge of the oceanfront resort area, you’ll immediately recognize it by its Jeffersonian-inspired architecture, mirroring the design of Monticello. It reopened in early 2018, after an $80 million renovation.

Back in the day, the Cavalier was considered a glam destination for the country’s biggest stars — noteworthy guests include F. Scott Fitzgerald, Frank Sinatra, Muhammad Ali, Bette Davis, Judy Garland, and Elizabeth Taylor. Ten US presidents have stayed here, too.

If you can swing a stay, do so. The hotel has exquisite rooms and suites, three restaurants, a world-class spa, and an infinity pool. But you can also just stop by for a tour, a taste at the onsite distillery (the only hotel distillery in the country), or a quick bite at the tavern — and if you can’t do it all, odds are the Cavalier will still be here on your next visit. Its history will only have gotten that much longer in the interim.