Dish by dish, one family is exploring the world without leaving their home. Brianna Deveraux-Allen has been cooking up connections, using her kitchen to transport her loved ones to countries and cultures around the globe. Her mission: create a well-researched meal from a new country every week. Then serve it with facts, fun, and finish it off with an artsy sketchbook entry. And keep doing it, 204 times.

What possesses someone to make an authentic meal from every country, in alphabetical order? Deveraux-Allen laughingly admits the project started with fanciful visions of time spent with her young son, and a blindness to the energy it would require. What has kept her going has a more complicated answer. The simple ideas that originally inspired her have transformed into a deeper drive of togetherness. First, her family bonded, then the world responded. Now, with thousands of ideas for dishes from friends and strangers, she presses on, halfway through the five-year adventure.

It started with a “whimsical idea”

Deveraux-Allen’s cooking confidence was at an all-time high when this project began. This California-based artist and dance instructor was having fun with a meal kit delivery service, playing with new ingredients and techniques. While cooking, she spotted the world map that she hung on the wall for her two-year-old son. Then the thought hit her. “My little whimsical idea. Oh, we’ll cook and learn together!” 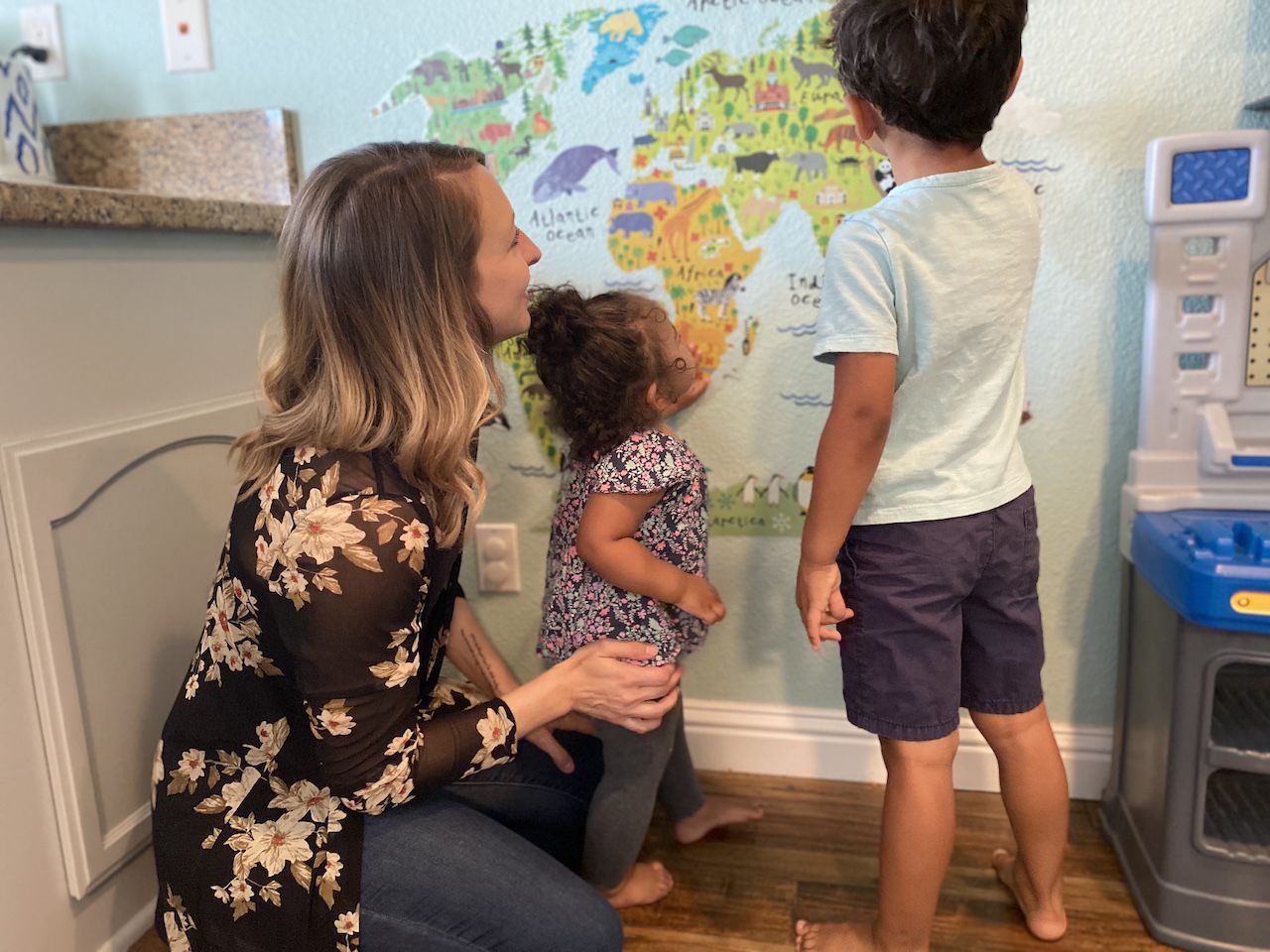 “I had this fantasy about how fun and educational it would be. Mostly I wanted to use some new ingredients, learn some new techniques, talk for a few minutes each week with my son about other countries, and maybe gain some cooking status. But it’s become so much more than that.”

She started out by making these adventurous meals for her husband and son. She got inspiration from social media hubs and fellow food bloggers. Some countries have an abundance of food coverage, while others, like Chad, required more digging. But she fell into a rhythm and found herself creating a meal and sketchbook entry every week. 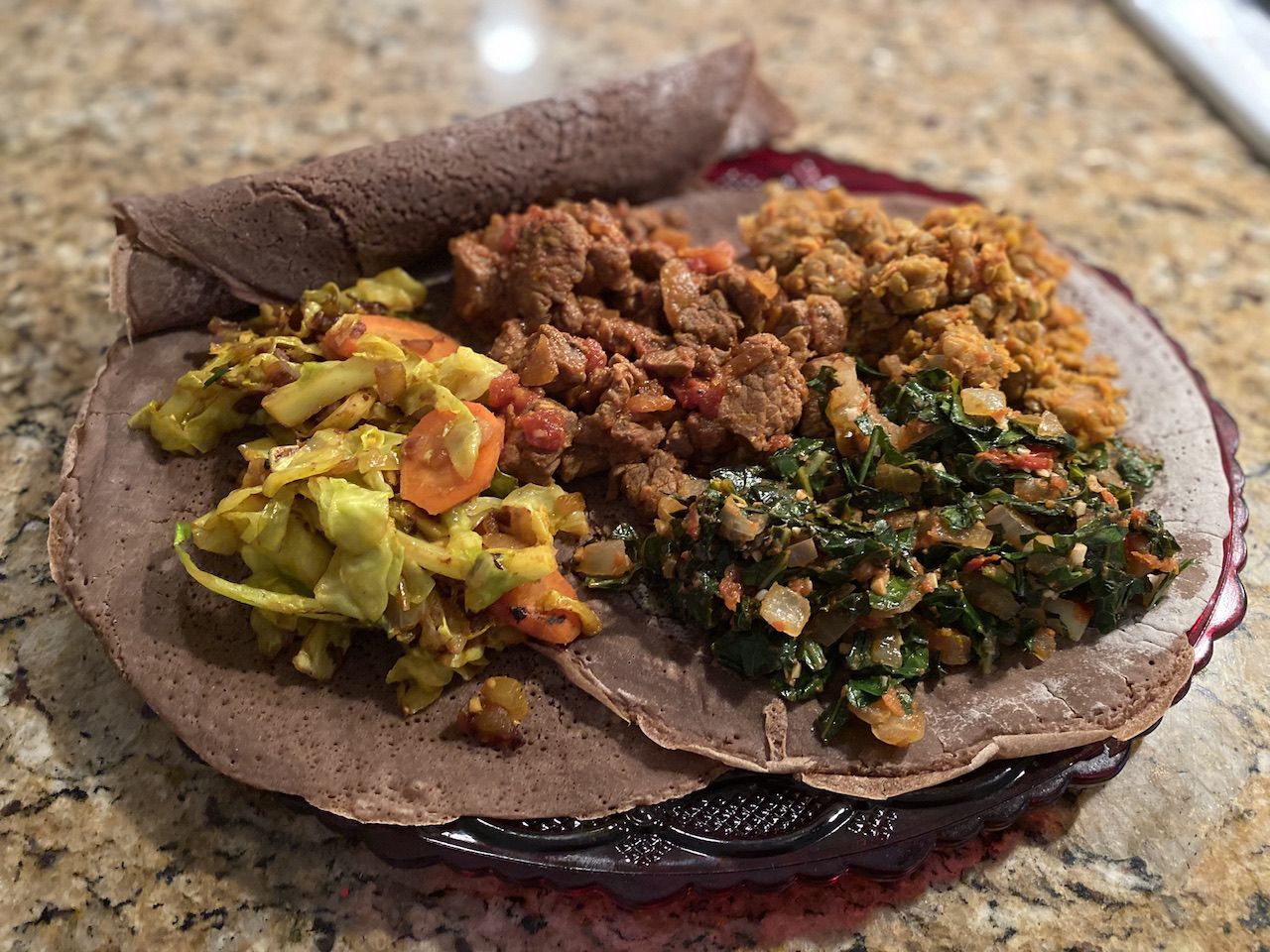 Life plays with the best-laid plans. Shortly after starting, Deveraux-Allen found out she was pregnant with their daughter. Apart from the obvious changes in energy and schedule, new ingredients also meant new smells. The aromas of the biryani and chingri malaikari from Bangladesh pushed her smell sensitivity to its limits. Her four-year project plan extended as she took a pause.

After spending time with her baby daughter, she returned to her cooking across the world project. But one issue still lingered: ingredient sourcing. Deveraux-Allen can order oils and spices, but uncommon produce has to be scouted and sometimes substituted. She tries her best to be authentic with the ingredients, but sometimes it is just not possible.

There was, for instance, the flying fish for the Barbados dish. Not exactly a staple in California markets. She passed on buying the only flying fish option, $200 for a wholesale bulk order. The far more affordable tilapia took center stage.

“Next up is Greenland. Can you imagine trying to source whale meat or Narwhal blubber here?”

Deveraux-Allen has learned to let the small things go and focus on the project’s real benefits: the change she sees in herself and her family. 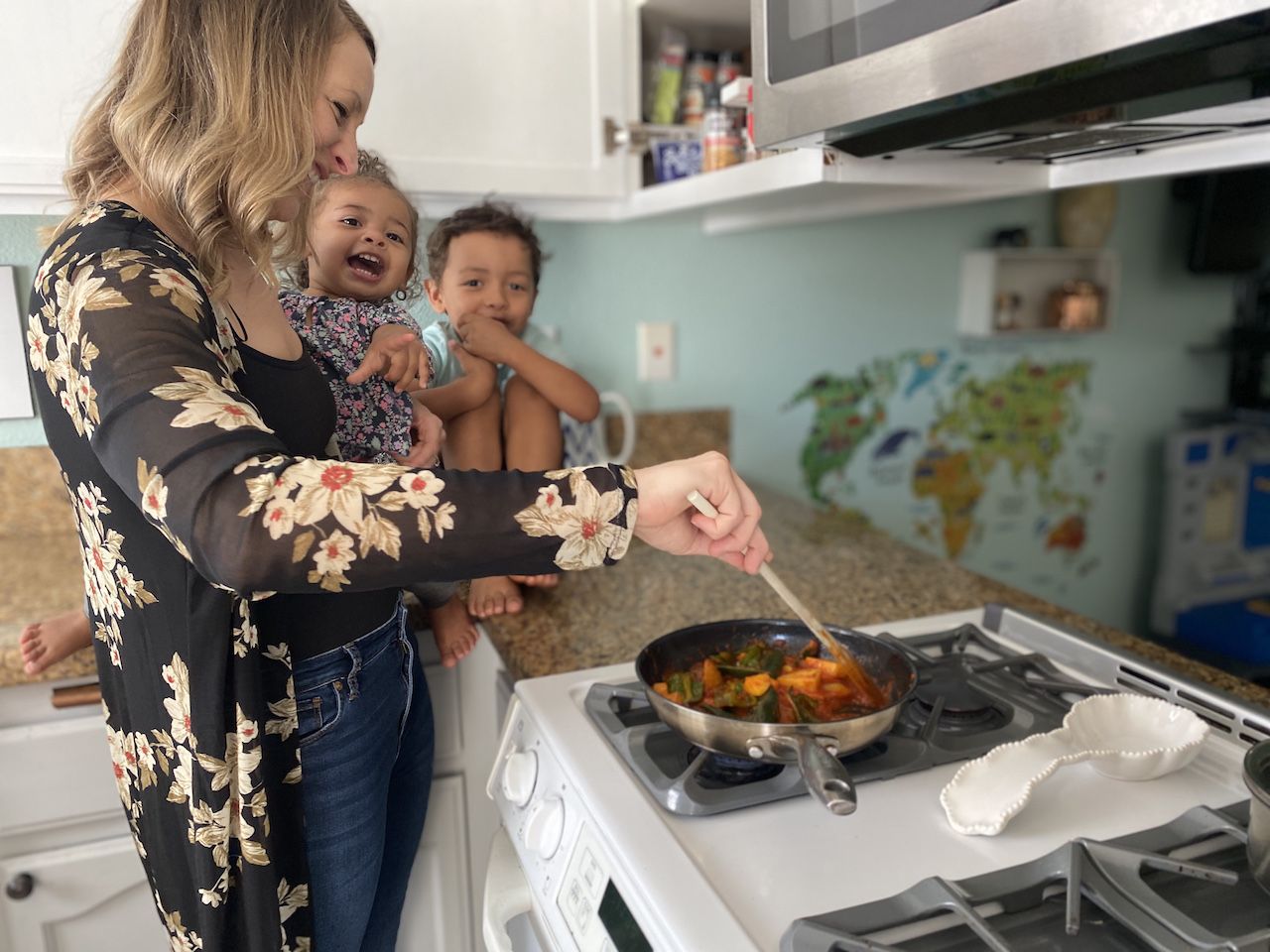 The project’s passion always comes back to family. It’s hard to create new habits, and the birth of a child is a perfect excuse to bow out of a demanding plan. But Deveraux-Allen persisted.

“Of course there have been weeks I haven’t wanted to bother, and there have been several times I’ve wondered if it’s worth the time, planning, money, and sanity it cost. But then there are the moments that my nieces excitedly ask me ‘which country are we having?’” 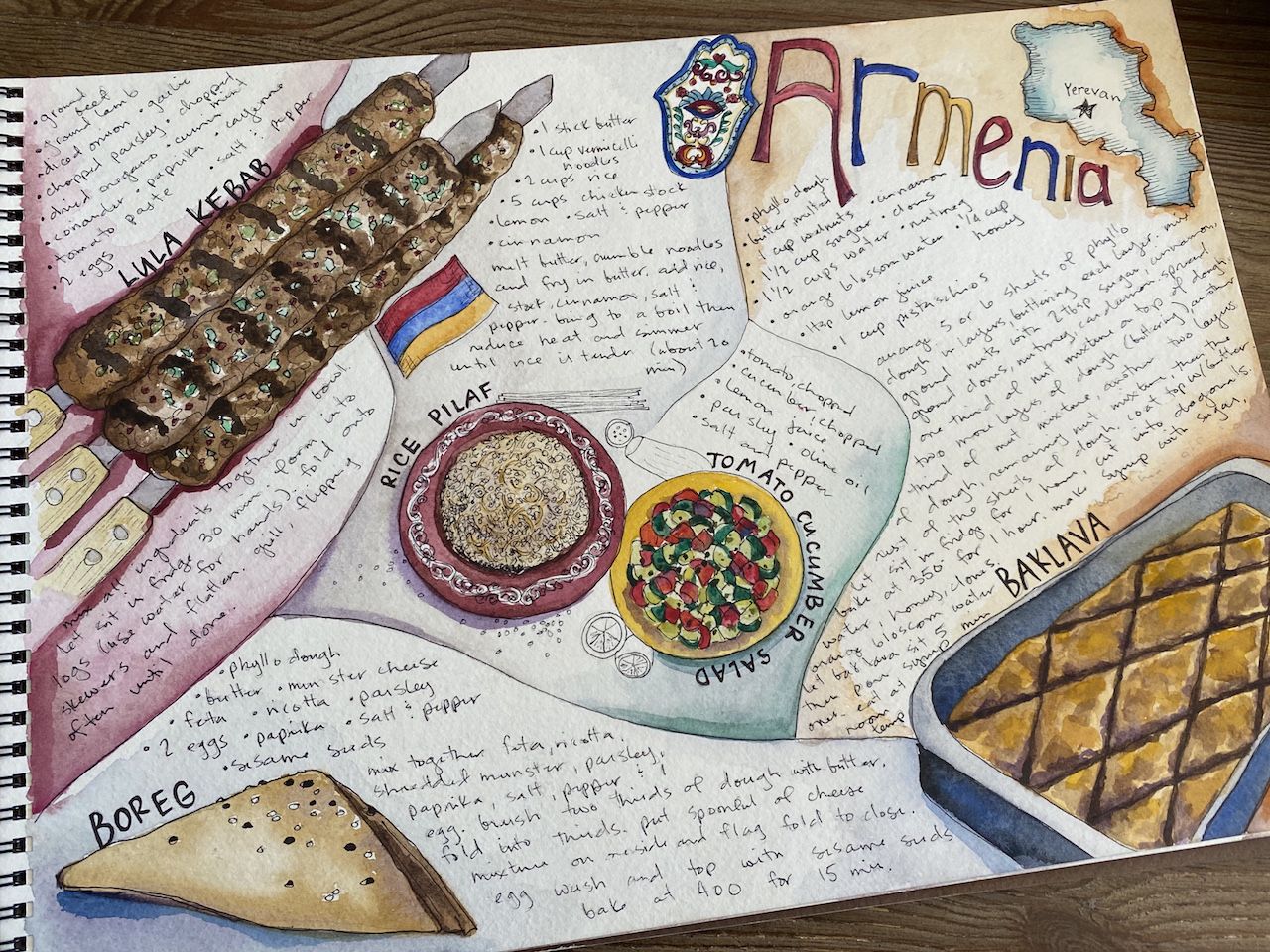 Armenia was the first answer to that question. Her brother’s birthday was the debut family event, featuring lule kabobs, borags, and baklava. It was a complete success.

“Oh man, that meal was good! I think I used three sticks of butter when it was all said and done.”

Now Deveraux-Allen’s nieces make flag tablecloths and find music for each country. The picky eaters, young and old, have become more adventurous. And she still laughs at the video of her and her brother sweating and frantically whisking fufu to keep it from clumping. The family’s new-found connection, both to each other and the globe, keeps Deveraux-Allen going. 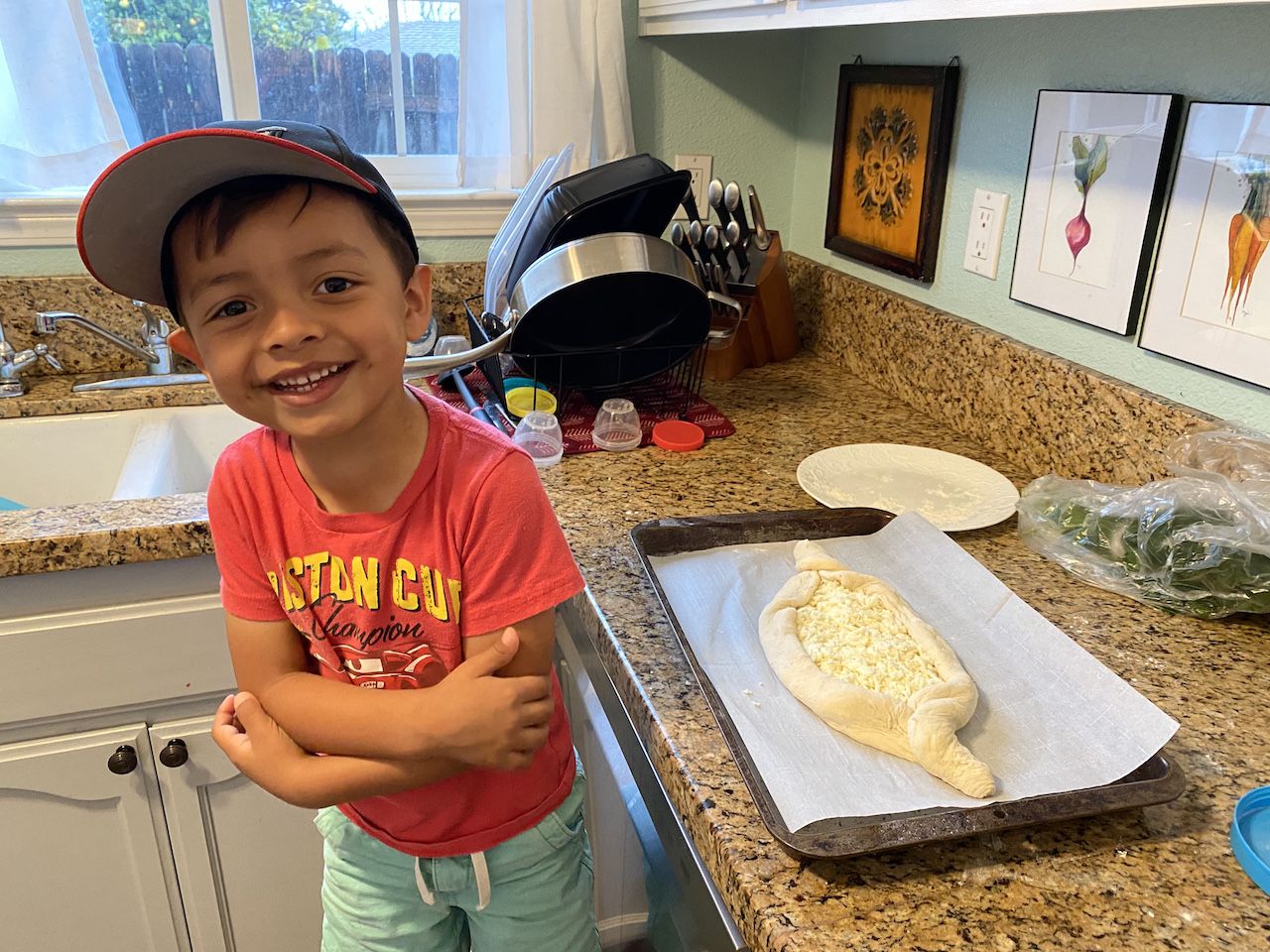 “My son is starting to get it, too. Now when I make a meal, he wants to know where it is on that map. He’s already starting to love and appreciate the world and all the many kinds of people it has. If I can give him that through food, I will.”

People around the world join in 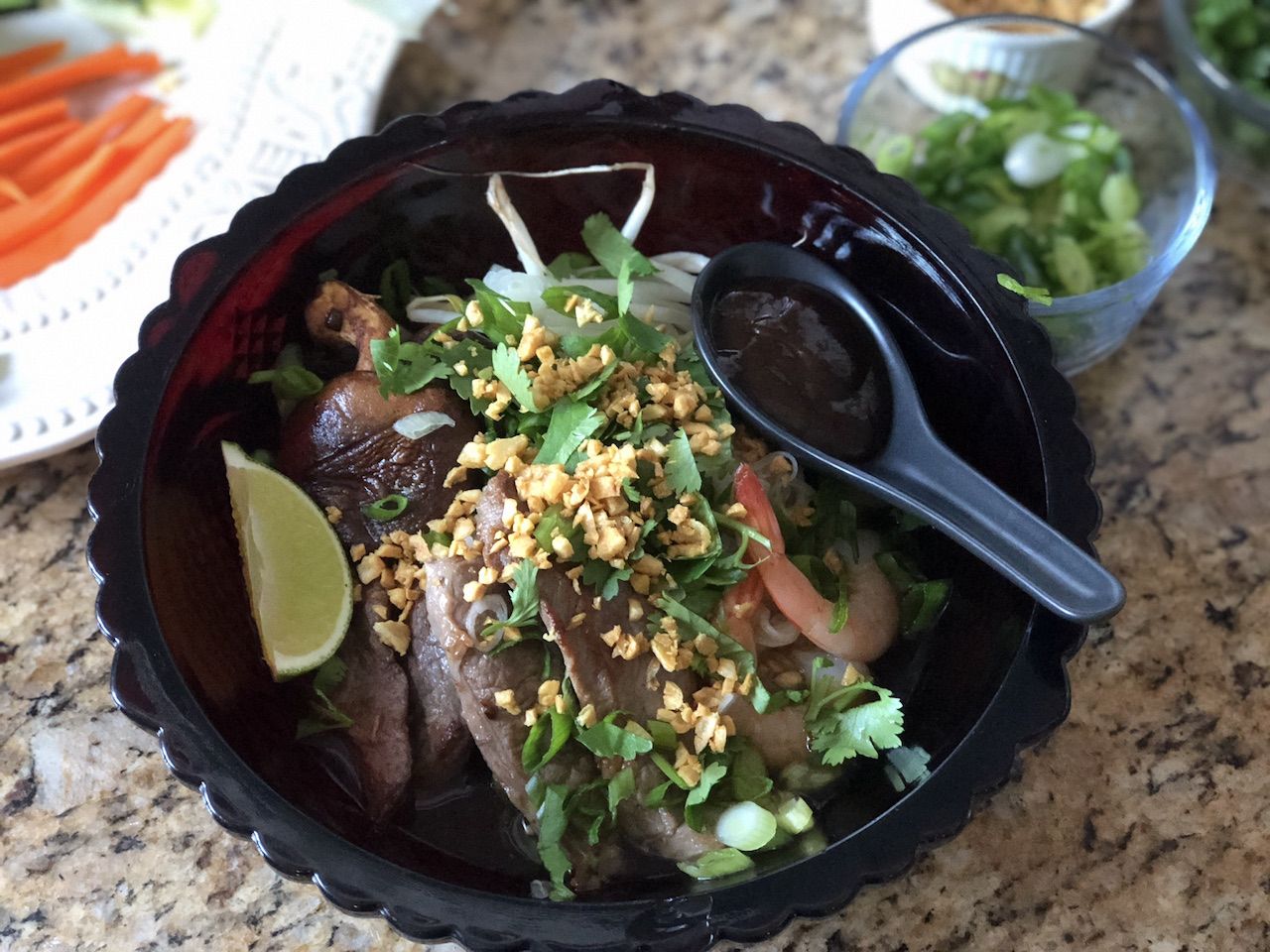 Deveraux-Allen took the celebrations beyond her family. Friends joined in, bringing recipes from German mothers, Lithuanian grandmothers, Ecuadorian travels, or requests for that one dish she just has to make when she gets to Poland. The exchanges were full of reminiscing about beloved relationships and reliving cherished moments from meaningful trips.

“It just warms my heart how excited people get about food and how much it brings people together. Everyone has a relative or someone they know, or a memory they want to share through recipes. Food is the universal language.”

When Deveraux-Allen posted in an international travel group about her experiences and called for F-Z recipes, 15,000 people responded. Many loved the story and begged her to create a cookbook with her sketches. Others joined in with more recipes, more personal stories, and more cultural connections. Her family’s global journey has literally gone global. 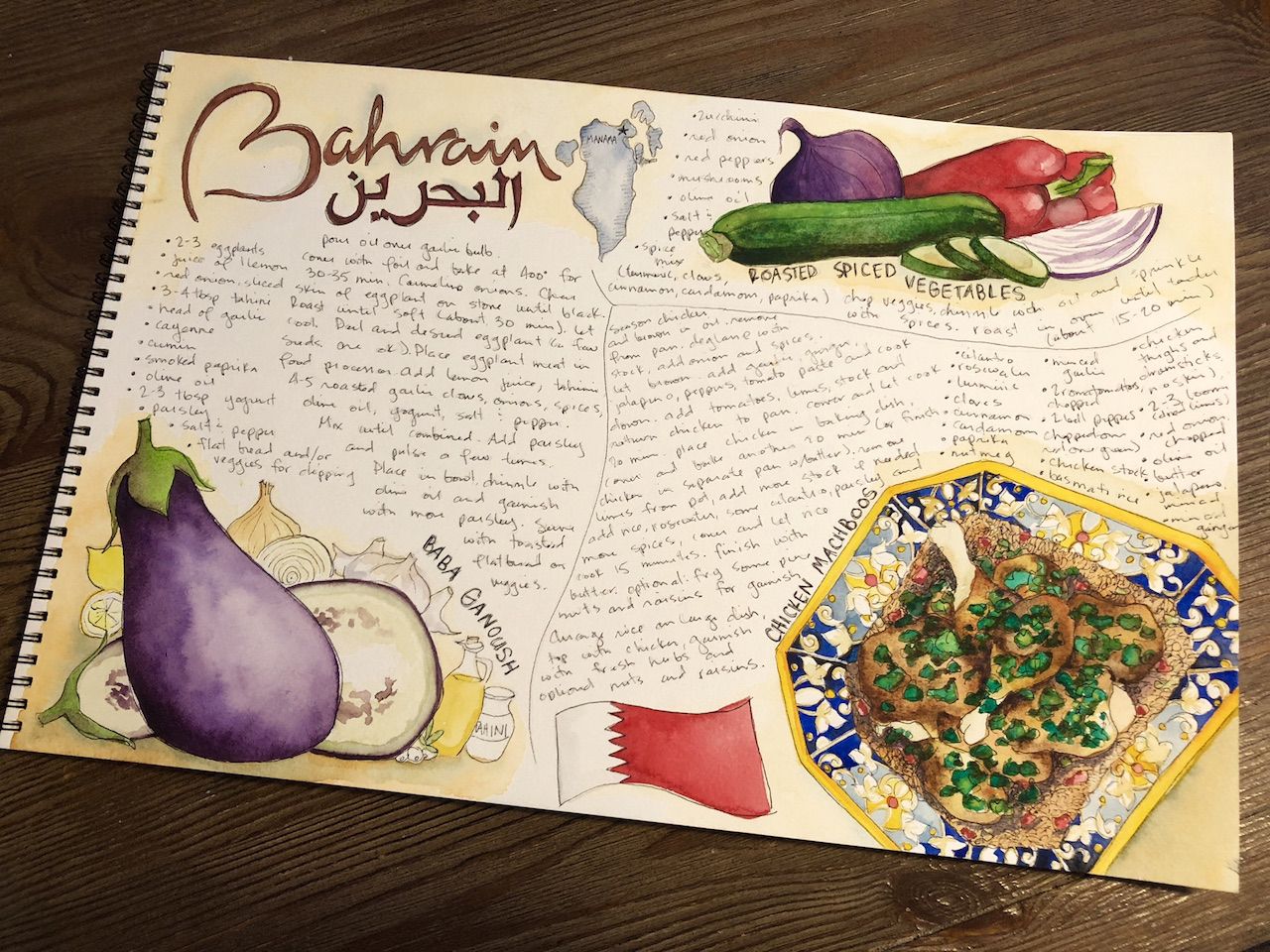 “Everybody gets excited. It doesn’t matter who you are or where you’re from. We all have this in common. And it shows that we really do have more in common than we [are] different. Every culture, everywhere, people come together over food.”

While Deveraux-Allen artfully dodges responding to requests for her sketchbook to be published, she makes no secrets about the plan to continue. In fact, that final country count isn’t so clear. She’s already added several regions and unrecognized countries and fully anticipates adding more as she finds delicious recipes. “I can’t even begin to explain the impact this has had on me personally but also on my family. I have learned so much and grown as a cook, an artist, and a person. I’m incredibly grateful for this experience.”

Food + DrinkThis Italian Grandma Is Holding Virtual Pasta-Making Classes To Keep Us Connected
Tagged
Food + Drink
What did you think of this story?
Meh
Good
Awesome