The Breakers in Palm Beach sounded more like a retirement home TV room in Boca.

Hacking coughs and wet sneezes interrupted the waves crashing against the iconic hotel’s shuttered, empty beach. Guests rubbed their eyes and made uncomfortable faces until the irritation got to be too much. A few sought relief in the swimming pool. Most just went inside to the HMF Bar.

“Red tide,” a towel attendant told me. “Nobody’s been out here all week. Sucks.”

While a closed beach at a luxury hotel is indeed a tragedy, it pales in comparison to the scene at other Florida beaches this summer. The red tide that’s been creeping through the west coast of Florida has left beaches littered with dead fish rotting in the summer heat. A smattering of eels, sea turtles, and other dead marine life taking up the beach space usually occupied by vacationing Europeans. Pictures of this ugliness were common along the Gulf Coast this summer, but in October, the red tide began creeping around to Florida’s east coast, causing beach closures from Miami up to Palm Beach and recently into the Indian River and Brevard Counties.

As inviting as respiratory irritation and the stench of dead fish might be, it doesn’t exactly scream “tropical vacation.”

So what, exactly, is this scourge of the water that’s closing the nation’s most popular beaches? And, more importantly, what does it mean for people planning a vacation to Florida? Here’s a quick primer on red tide and how it might affect your trip to Florida.

What is red tide anyway?

Red tide is a common term used to describe a harmful algae bloom (HAB). Currently, waters in and around Florida are experiencing an abundance of Karenia brevis algae, which omits a harmful neurotoxin that kills fish and other marine life. It also depletes the ocean of oxygen, making it uninhabitable for a lot of animals. This is why fish are washing up on Florida’s coastline (called a “fish kill”) and the birds eating those fish are dying, too.

This one started about a year ago off the southwest coast but got particularly nasty between Ft. Myers and Sarasota over the summer. Tropical Storm Gordon brought the algae up to the Panhandle in September, and currents have spread it to the east coast this month. Though the size of the bloom varies by day, it’s the largest red tide the state has seen since 2005.

How harmful is the red tide for people?

A state largely dependent on beach tourism isn’t closing its beaches for no reason. So, yeah, it’s harmful. Though the red tide won’t kill people like it does fish, getting it on your skin can cause severe irritation to the eyes and skin, plus nasty rashes.

Even being near the water can be harmful as the force of crashing waves breaks open the algae, releasing the neurotoxins into the air. Those toxins are why guests by The Breakers’ pool were coughing, sneezing, and rubbing their eyes. People with respiratory problems or severe asthma have been advised to stay away from the ocean altogether during red tides as they’re particularly susceptible to the toxins.

What caused this red tide?

Scientists haven’t pinned down a specific cause of this bloom, and since red tides have been documented all the way back to the days of Spanish exploration, it’s hard to say. This particular bloom started earlier in the year than usual and doesn’t seem to be going away. Environmental groups point to overdevelopment, agricultural runoff, redirection of water from Lake Okeechobee, and other man-made factors as the cause of the bloom.

Others call it a result of Governor Rick Scott’s closing water-quality testing centers, earning him the election-year-nickname Red Tide Rick. Others say it’s a result of climate change or a cyclical part of the unique Florida ecosystem. Whatever the cause, it’s an environmental catastrophe that the state is scrambling to clean up.

How long is it going to last?

Nobody knows. There were hopes that Hurricane Michael might break up the red tide, but that didn’t happen. Blooms can last anywhere from a few weeks to years, depending on water conditions. Everything from sunlight to wind and water currents affect how long the algae can thrive. Even scientists from the National Oceanic and Atmospheric Administration can’t put a guess on it. 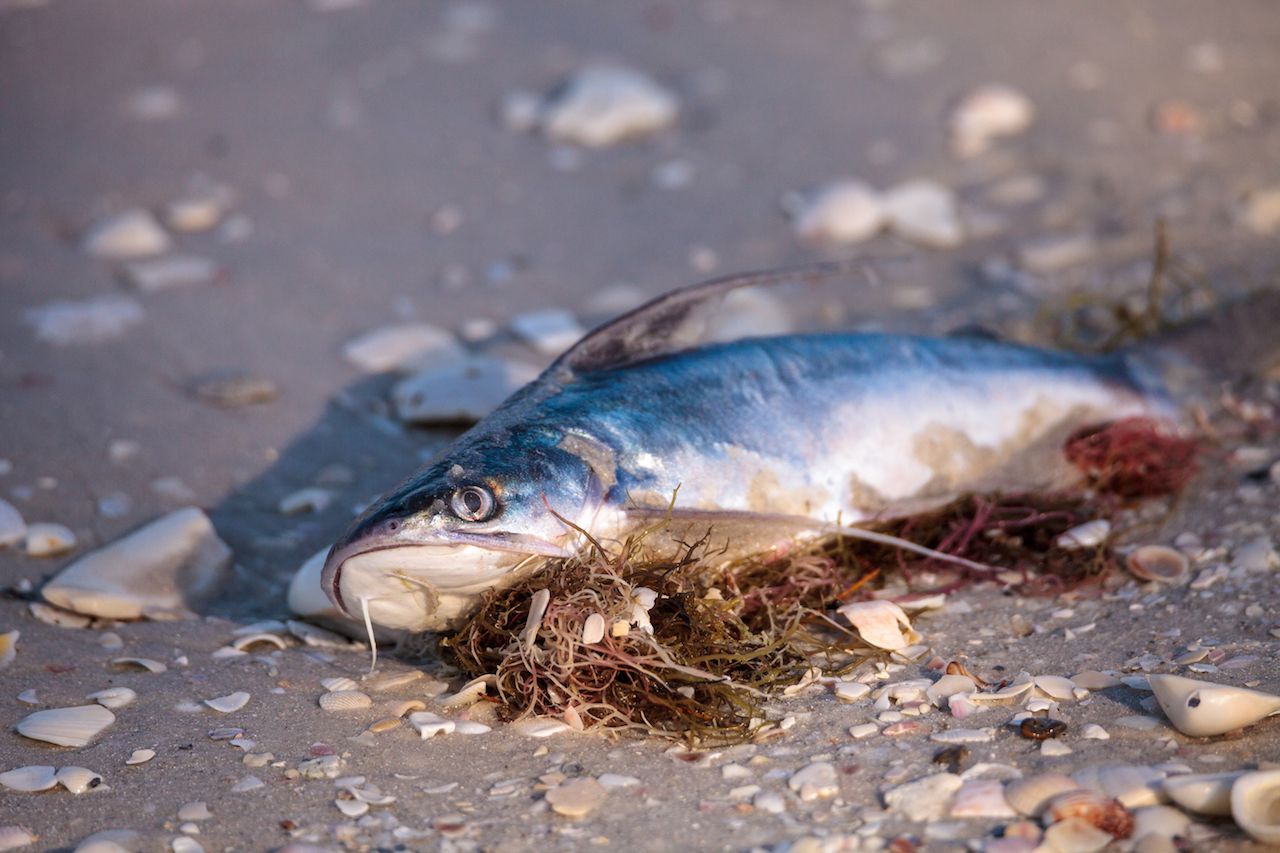 Will the beaches be closed when I go to Florida? And full of dead fish?

Maybe. The tide has been hanging around the Gulf Coast for a while, and your chances are worse there. The red tide creeping up the east coast has already left Southeast Florida, moving up near Titusville and Melbourne with a small strand now sneaking down into the Keys. So your destination may have red tide now but not when you get there. Or vice versa. Your best bet is to follow the NOAA’s conditions reports and red tide forecasts like you would a weather report. That way you’ll be prepared for what’s coming and can plan some fun trips to the outlet mall if the beaches are closed.

What about fishing and watersports? Can I still do those?

With sick fish in the water, fishing near the coast is going to be a bad idea. Best case scenario you spend the whole day sneezing and don’t catch any fish because there are none in the water. Some charters can take you outside the red tide, further out into the Gulf of Mexico or the Atlantic Ocean. Marine life out that far may still be affected by the red tide, so eating the fish you catch is a risk you’ll have to measure. Filter-feeding shellfish like oysters and clams can get red tide toxin buildup, which can give you Neurotoxic Shellfish Poisoning if you eat them. So while your mahi-mahi might be fine, avoid Florida filter feeders for a while.

Is Florida doing anything to clean it up?

Of course. Governor Scott recently allocated $13 million to local governments to help facilitate cleanup efforts, though not much has changed thus far.

So should I plan a Florida vacation this year or wait until the red tide is gone?

That, friend, is up to you. Florida is a big state with a lot to do other than lay on the beach. Look no further than any “Florida Man” news story for proof of that. There’s Disney World. There are the nightlife and restaurants of Miami. There’s the Everglades and the Florida National Scenic Trail. There’s whatever people do in Bradenton. Basically, there’s no reason the red tide should ruin your Florida vacation, necessarily. It just means you might have to change your itinerary around a little. Though the red tide might not be at your destination now, it could be then. Or not at all. Plan as normal and adapt if you need to. Just realize that if you start sneezing by the pool for no apparent reason, it’s probably time to go inside.