For nearly six straight weeks, I’d been sitting with my back against the wall in a rigid meeting chair borrowed from my office.  I was spending upward of 12 hours a day in the same place, slogging through Zoom meetings and online trainings.

I needed a break.

Fortunately, my job (firefighter) allows me to have a few months of the year free. And because firefighters tend to bond so closely with their colleagues, it’s usually not hard to find a friend to travel with. So when I called one up and asked if he wanted to plan a scuba diving trip to the Florida Keys, it didn’t take long for things to get moving.

Because the Keys are such a well-known dive destination, it wasn’t hard to make the plan of where to dive or to book spaces on dive boats throughout the islands. But from there, it got a bit more difficult — we found that hotels were pricey and business was booming as so many travelers opted for domestic destinations rather than Caribbean islands.

However, we eventually found a far more affordable option far more feasible than a $500-a-night hotel: a van. So we planned a Florida van life vacation, moving from Key Largo to Key West. Renting a van helped us avoid crowded hotels, save some money, and experience the (mostly) carefree nature of living the Florida van life at the beach. We planned our trip pretty late, but these tips for anyone who wants to live the van life in Florida should help take some of the stress off planning any time of year.

Being a vanlifer isn’t always the cheapest option, especially when you take into account the miles per gallon you’ll get in an average van. So look at the costs of your selected camper van rental company; putting it into a spreadsheet works well. Compare the cost of a night at a hotel against the rental fees, mileage and gas costs, and campground and parking fees. In most parts of the Florida Keys there’s an ordinance against parking overnight on roadsides or in parking lots, so if you think you’ll just poach a spot wherever you stop for the day, think again. When doing your calculations, keep in mind that hotels may also have additional taxes and resort fees not shown on the online rate.

In the end, the costs for a six-night trip were very close to the cost of six nights in a hotel, with a difference of about $300. But because renting a van eliminated the headache and cost of a rental car — and added an element of adventure — my travel buddy and I agreed it was the way to go.

After you’ve secured your van rental, get to work researching and calling accommodations, including campgrounds, campsites and RV parks. And yes, you may have to make phone calls. Many campgrounds in the Keys (especially the family-owned ones) don’t have a strong web presence, so just pick up the phone and ask what’s available. 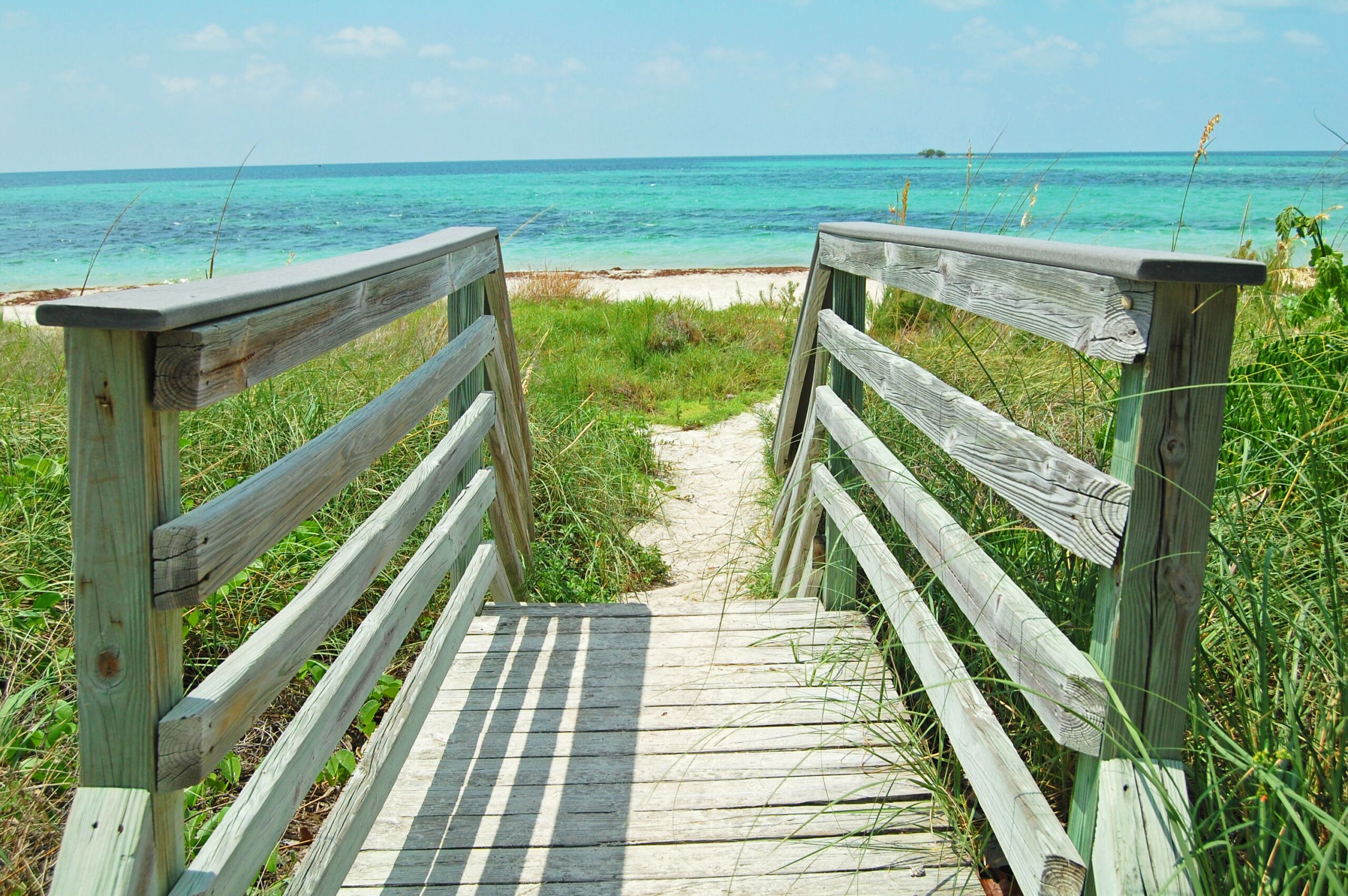 I separated my search into the Upper Keys (Key Largo and Islamorada) and the Lower Keys, which really had few options outside of Key West. Because most of the state parks and other campgrounds run by government agencies are typically booked at least several months in advance, there were no adorably beachy, palm-tree-covered campsites available on my short one-week notice. However, with enough notice, you can book many state park campsite reservations online. If you have time on your side, look into highly coveted sites at Bahia Honda and John Pennekamp Coral Reef state parks.

Because I was tight on time, I booked right away if a place looked good enough. That allowed me to move on to more detailed planning. The two I chose were Key Largo Kampground and Boyd’s Key West Campground. Both are developed RV and camping facilities with electrical and water hookups, pools, marinas, and other amenities. There are long-term residents in both locations. They aren’t primitive or dispersed backcountry sites in any way, but they both made great base camps and were around $100 per night.

3. Factor in your travel time

Because the van rental company was in Orlando, we flew there first. Miami would have been closer for road tripping in the Keys, but we found the cheapest rental vans in Orlando. If your budget is very tight but your time is a bit flexible, it’s worth shopping around different cities for van rental companies and flights. The drive from Orlando to Key Largo was a solid five hours. Since our first campground locked the gate at 10 PM, it left us with a very fixed window of when we needed to travel.

As an aside: many campgrounds have a similar policy and require you to have a key to enter past 9 or 10 PM. As we learned after walking out for sunset drinks and returning late into the evening, you probably don’t want to keep the key in your van’s glove box. 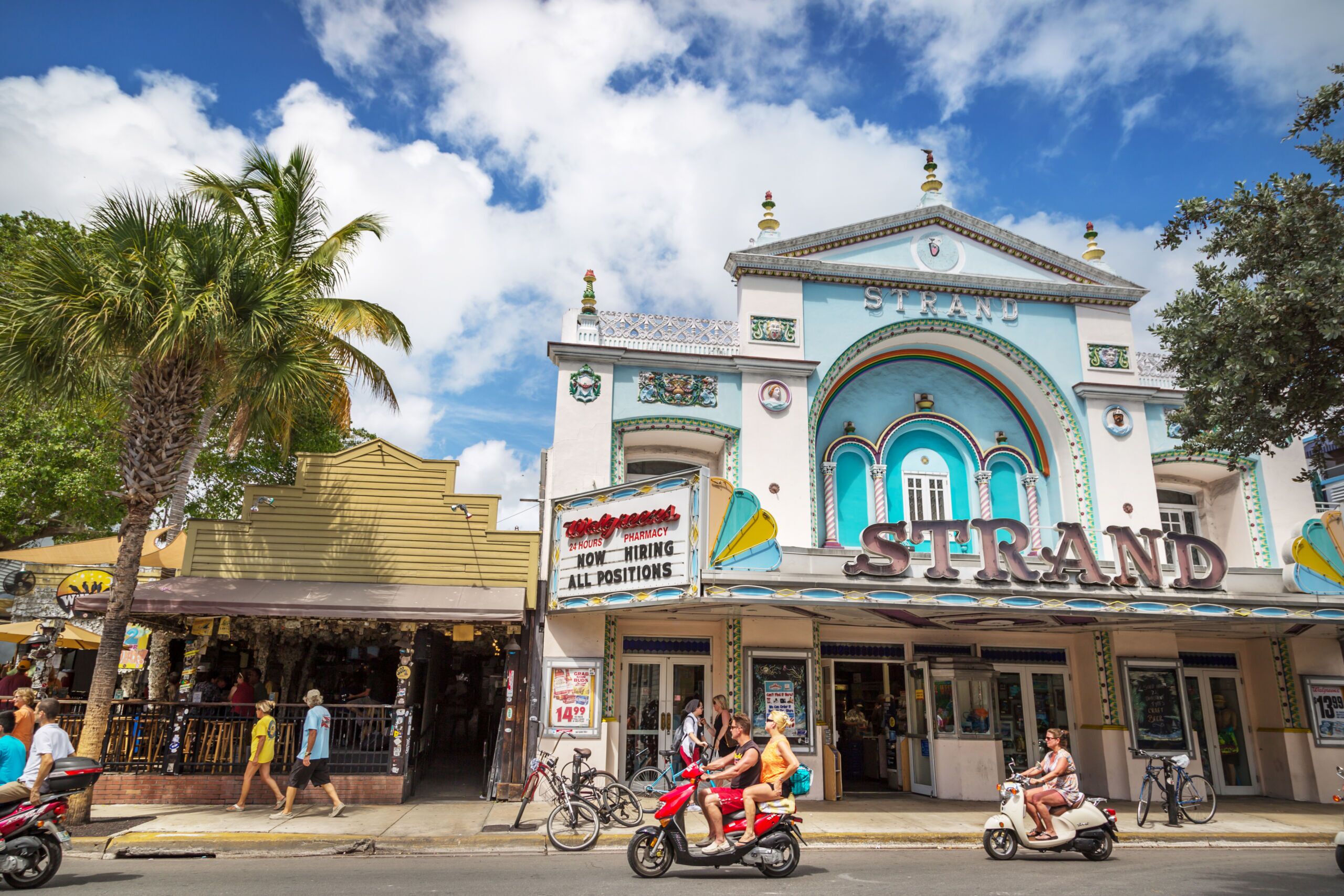 For local transportation, consider a scooter or bike. While the beauty of a van rental is that you can drive around town with all your possessions, it also can be a bit annoying to drive a van through crowded small streets. Rent your e-bike, cycle, or scooter as soon as you know your plans as rental fleets often sell out days in advance. There are plenty of drivers for Lyft and Uber around the Keys as well.

Hammocks are a must-have. There’s always something nearby to hitch to (especially palm trees), the lightweight material makes them an easy addition to a carry-on bag, and they pack up extremely small. 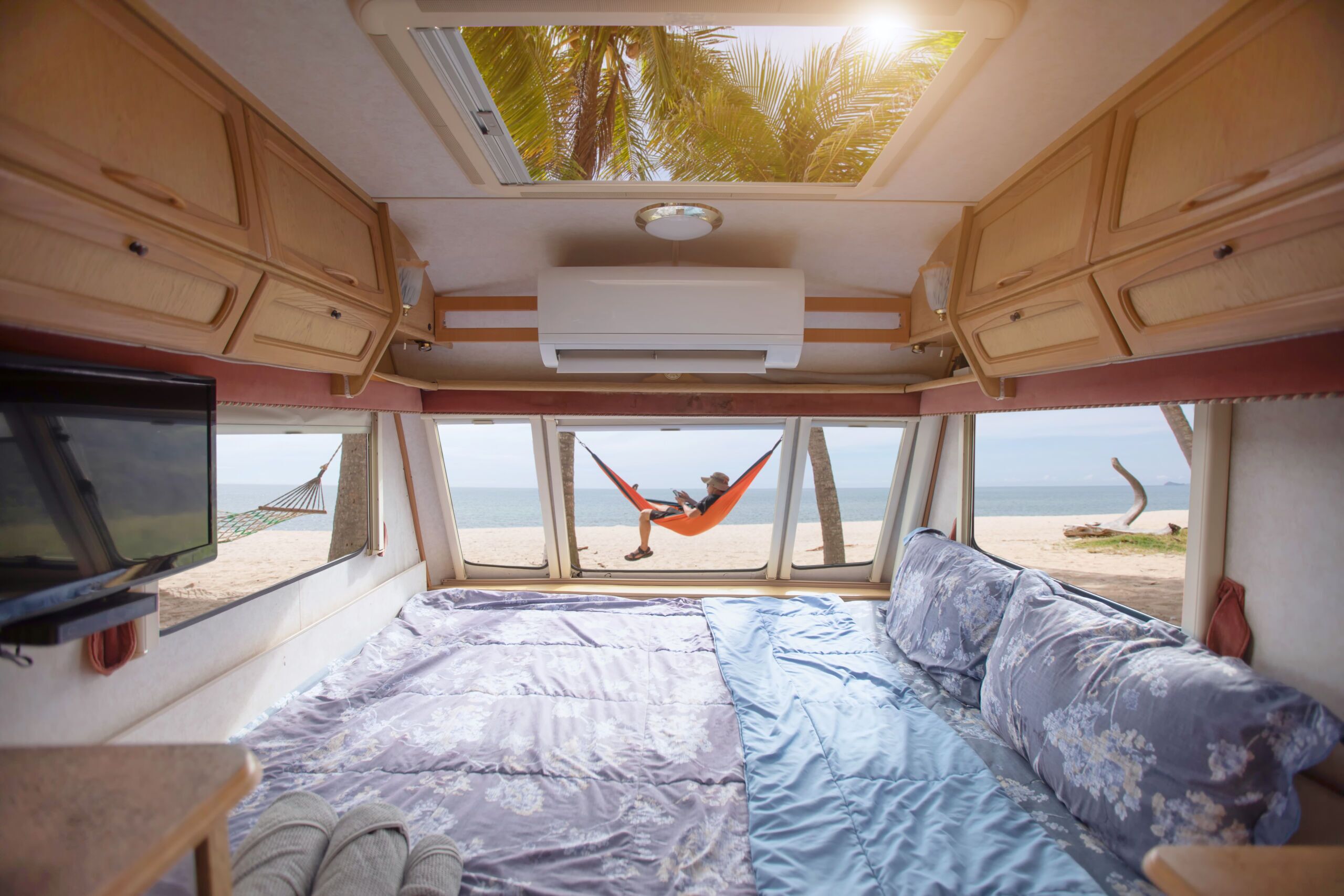 If you have the option, rent a small fan from your van company. If your site has electricity, a fan is going to feel great and keep air moving through the van at night. You can also buy one at a cheap box store when you arrive, though a small one in the van will be helpful (along with an extension cord) to keep things breezy on stagnant and humid post-storm nights.

Finally, unless you’ve rented a very posh van, you’ll be sharing bathrooms. Make sure you have a tote for your toiletries or shower items unless you want to be carrying everything back and forth from the bathrooms gathered up in your soggy towel. Robes or a post-shower cover-up can be useful, too.

5. Create a food and drink plan

Our van had a cooler drawer in the back to keep drinks cold that worked even while the van was off. It’s small, but we managed to fit a few blocks of cheese, two six-packs, and a few random bottles of water. It was enough to sustain our needs.

We did buy about $250 in groceries for our six-day Florida van life engagement, though we ended up not eating most of it  — hence the advice to make a food plan. We wanted to try a lot of seafood while in the Keys, which meant we opted for restaurants for most of our meals. And since we were always hungry after coming up from our dives for the day, we made quick stops at local restaurants. The Keys have a great local food scene, so don’t come in with the lofty goal of cooking at the campsite if that’s not your usual M.O.

If you do plan to cook, make sure your van is equipped for that. Some come with hot plates and cooking supplies, while others are more no-frills. We rented the optional kitchen kit (and bedding kit), but without it, we would have had to make a fire at the campsites or bring a camp stove with us. Most van rentals will at least have a sink, which usually holds around five gallons for basic cooking needs.

6. Learn from our lessons

We were primarily in the Florida Keys to go scuba diving, so this trip was all about getting in and on the water for us. We didn’t care about the true “camping” experience. And for a water-focused vacation, a van is perfect. We were able to string up wet towels, air out our scuba gear, and not carry our dripping wetsuits through a nice marble hotel lobby, dragging sand in the process. 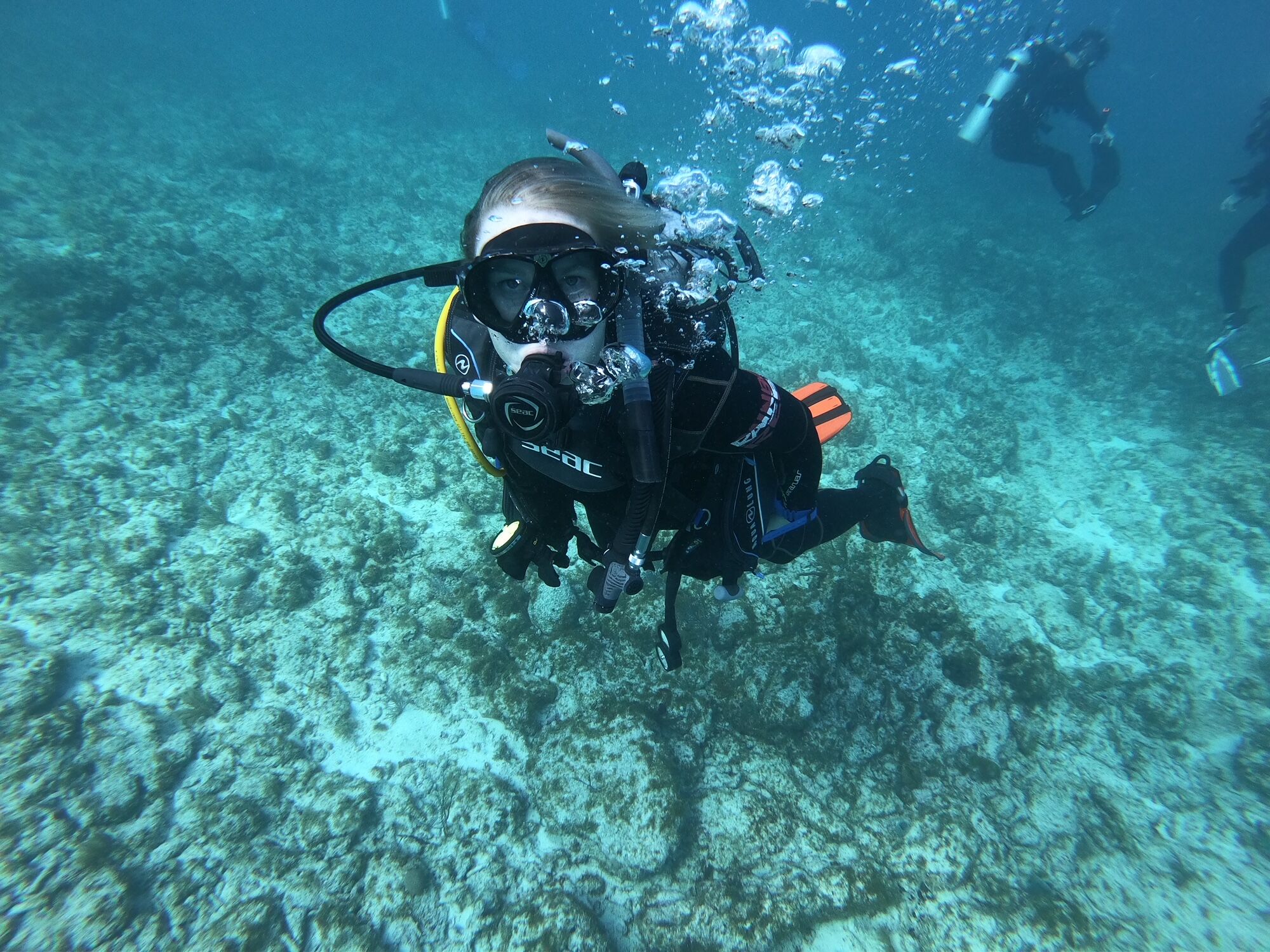 Having a campground facility with showers and bathrooms was also very useful, since we were always covered in (reef-safe) sunscreen and saltwater. It was nice to have running water rather than a gravity-fed solar shower. If you have sensitive skin and are wearing rental wetsuits, you’ll definitely want to be able to take a hot, soapy shower after your time at the beach.

In terms of crowds, well, it’s the Florida Keys — it’s popular. Expect all the islands to be busy unless you visit mid-August, when it’s extremely hot and humid. Visit any other time, and expect crowds. Even if you do score a campsite in a park or more remote campground, it’s not going to be like a backcountry experience in a national park. You  may want to bring earplugs if you’re a light sleeper.

The SunPass is a must-have for Florida van lifers. It’s the state’s prepaid toll road program, and you’ll definitely want one if you’re road tripping. But it’s hard to find and took us no less than three stops to find a store that had one. If you have a few weeks for shipping, you can buy one in advance online.

Honestly, even with the SunPass we still received a notice of a fine a handful of months later in the mail. But hey, we tried. It’s still valuable for avoiding most fines if you’re traveling much between Orlando or anywhere other than the actual Overseas Highway; there are a lot of toll roads. It’s also good in Georgia, if you’re headed north.

8. Hit a few of these must-see sights

On the lookout for great sights and stops? The list below covers some of our favorite stops on our trip, all of which are great if you’re last-minute planners like us.

How Key West is saving the US’s only coral barrier reef through sustainable tourism
Tagged
Budget Travel Road Trips RVing Florida, United States
What did you think of this story?
Meh
Good
Awesome

Why you should visit Buffalo, New York, in the winter. Really.
11 of the deadliest concert disasters in recent history
I traveled to South Africa during Omicron. This is what it was like.
The best Airbnbs in Nashville for a bachelorette getaway
The optimal itinerary for a US national park road trip, mapped

Scuba dive to submerged forests, shipwrecks, and caverns at these US lakes