On Fury’s Key West snorkel trips, the fish are generally a distant second on the list of colorful things passengers are excited about. The onboard rum punch, served with few mixers and fewer constraints, is the usual star of the show, provided once the snorkeling is over and the real fun begins.

But today’s dolphin watching debauchery is starting a little differently.

“Before we get going, everyone who wants to put on sunscreen needs to do it now,” the tanned crew member told the assorted crowd. “A lot of your sunscreens have chemicals that basically block sunlight from the reef, and if they’re not fully absorbed they get in the water, then on the reef, and then we got a bunch of dead reefs and nothing for you to look at.”

The folks who showed up were not expecting this impromptu lesson in coral reef conservation from a guy whose usual safety lecture begins with “beer before liquor….” But they were generally enthusiastic about doing a little bit of common good by using some of the boat’s reef safe sunscreen before commencing drinking.

Such is the state of sustainability in the seemingly unsustainable Florida Keys. Here, people’s livelihood is directly tied to the livelihood of the Great Florida Reef, which is the only coral barrier reef in the US. As that reef has eroded and died at astronomical speeds in recent decades, protecting it has become the top priority of almost everyone here.

Surveys show the Keys, and specifically Key West, at the top of 2021 travel lists. Those in eco-tourism find ways to show visitors how important taking care of this fragile ecosystem is — even if that means holding off on the rum punch for a little while.

A new kind of eco tour running on a hybrid boat 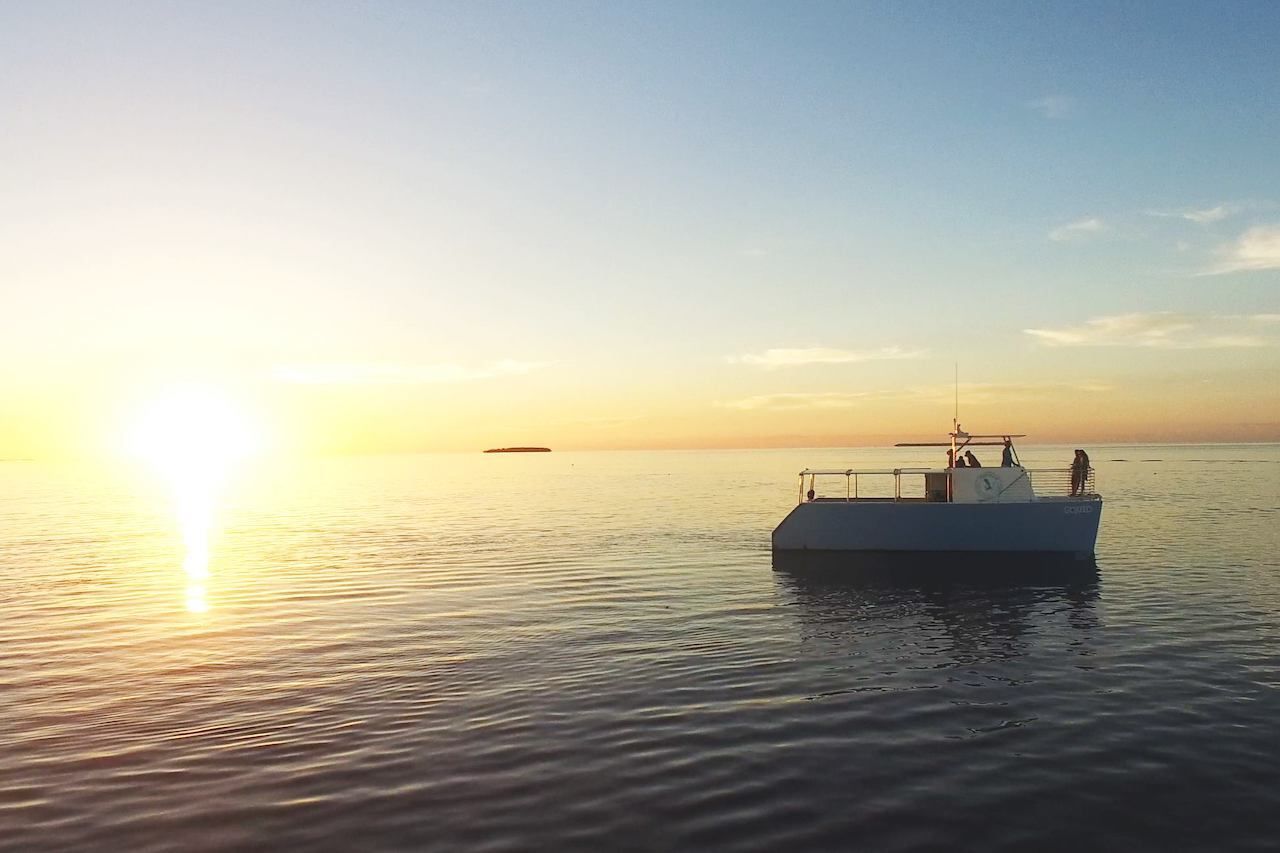 “If we keep pumping out all this CO2 and using all this plastic, it’s not like this reef is gonna be dead in 10,000 years,” Brady Stonesifer says as we cruise over the shallow turquoise waters just off Key West. “It’ll be more like a decade or two. This whole thing here’s going to be dead.”

Stonesifer is at the helm of the Squid, the first Coast Guard-certified, electrically propelled hybrid catamaran in the United States. He’s a head captain for Honest Eco, a Key West eco tour that’s trying to change the way people visit the reefs. His trip is equal parts dolphin watching, snorkeling, and environmental education. Onboard, guests learn how crucial reef preservation is while drinking from reusable water bottles and eating fresh organic fruit.

“It’s not like you’re going to go out on Duval Street and have a margarita without a plastic straw and say, ‘Hey, I saved the word tonight,’” he says. “But if you come on this trip today, and you learn about dolphins and turtles and this ecosystem, and you fall in love with it, you might think, ‘What can I do to protect the ocean?’ Maybe I won’t go buy that 24-pack of bottled water, or maybe I’ll get a reusable bottle. It’s not going to throw off the axis of the Earth, but it’s a big deal.”

On the long ride out to our snorkel spot, we also learn about the Squid, a strangely quiet catamaran propelled by two, 37-kilowatt motors that run on the same lithium ion batteries used in the BMW i3. When the batteries run low, Stonesifer can turn on a 20-kilowatt diesel generator to give the batteries some more juice.

Squid also has a full field of solar panels, though those are mostly used to charge the batteries. It’s the first boat of its kind, and the only one running tours in the Keys. But Honest Eco hopes it can inspire others.

“Squid’s the first electric boat, like there were first electric cars. And those are much more common now,” he says over the almost unnoticeable noise of the engines. “Hopefully, the same thing happens with electric boats in ten years. If we look out and 50 percent of the boats to our left and our right are electric, that would be a really exciting thing.”

Will genetically engineered coral be the future of the Keys? 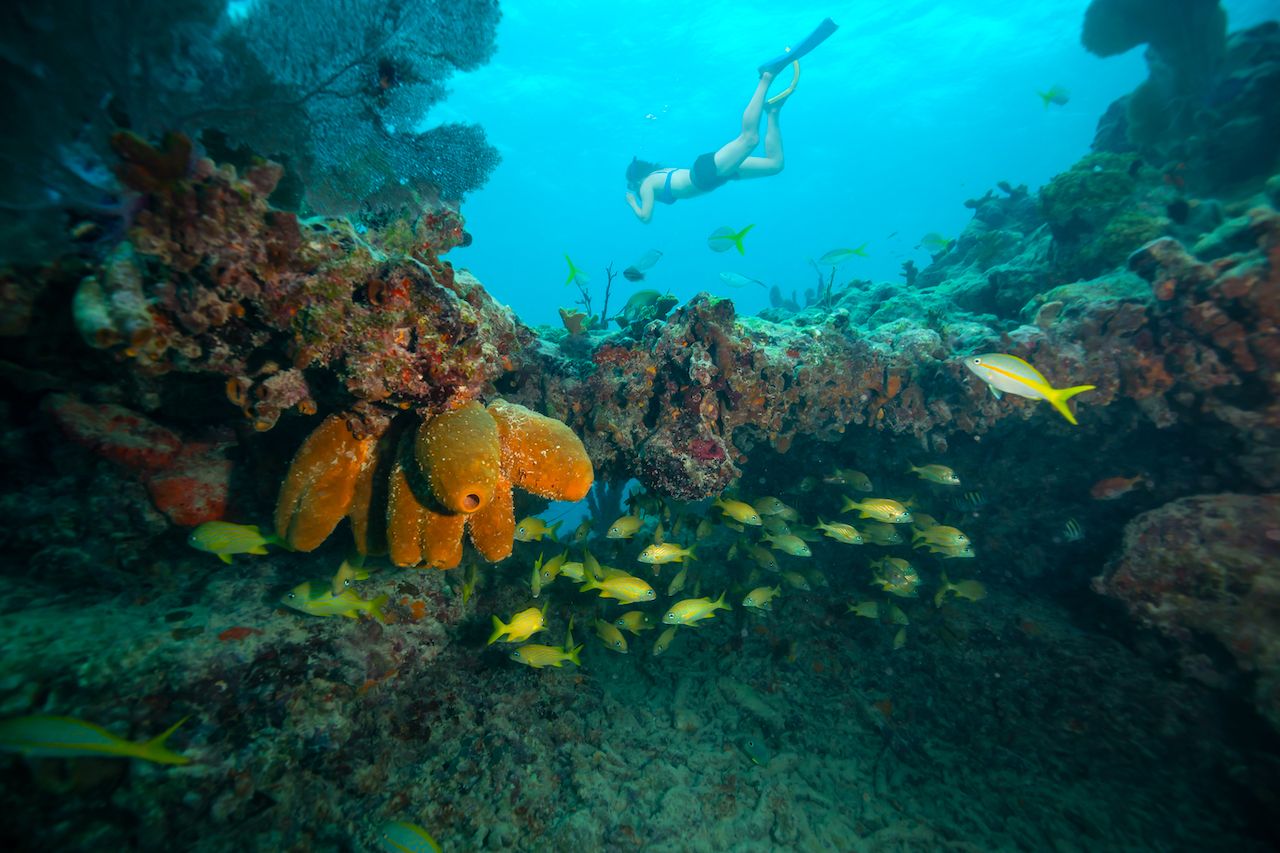 Businesses taking the initiative to help preserve the Keys is good news, but local governments and federal agencies are trying to do their part, too. In 2019, the city of Key West became the first city in the contiguous United States to ban sunscreens with octinoxate and oxybenzone, which have been shown to cause coral bleaching. The Florida legislature in Tallahassee later struck the local edict down, but the ban still served to educate the public on the sunscreens’ potential damage.

“You can still sell those sunscreens down here,” Stonesifer says. “But a lot of people, now by choice, won’t use the stuff.”

The Florida Keys National Marine Sanctuary is also doing its part. It recently released its Restoration Blueprint, a plan for restoring water quality, wildlife, and the Keys’ precious reef — a reef that the sanctuary’s community outreach manager Scott Atwell says is nearly at the point of no return.

“In the time since I left high school, 98 percent of the coral coverage is gone,” Atwell says. “So we’re in the middle of a 20-year, $100 million program to restore seven reefs by outplanting.”

Outplanting, as he refers to it, is a technique that includes planting genetically engineered new coral that’s more resistant to rising temperatures and acidity in the ocean. This spring, the program planted its first 60,000 pieces of coral on the Dry Rocks reef near Key West.

“We’re not trying to build a fence around [the reef] and say, ‘Don’t come here,’” Atwell says. “We want to create an environment where you can dive and see it. But we’re cognizant of the importance of managing the resource.”

It’s a positive step, but not everyone is sold on it as a long-term fix.

“We can plant genetically modified coral, but then 20 years from now we’re going to have to modify it again,” says Stonesifer. “That’s kind of like putting a paper towel down when your faucet is flooding the bathroom. We need to turn off the faucet.”

Of course, turning off the faucet of CO2 and excess plastic is a much tougher sell, especially in a state as politically diverse as Florida. But for now, the new coral is encouraging.

In the Keys, even big corporations know their bottom line depends on sustainability 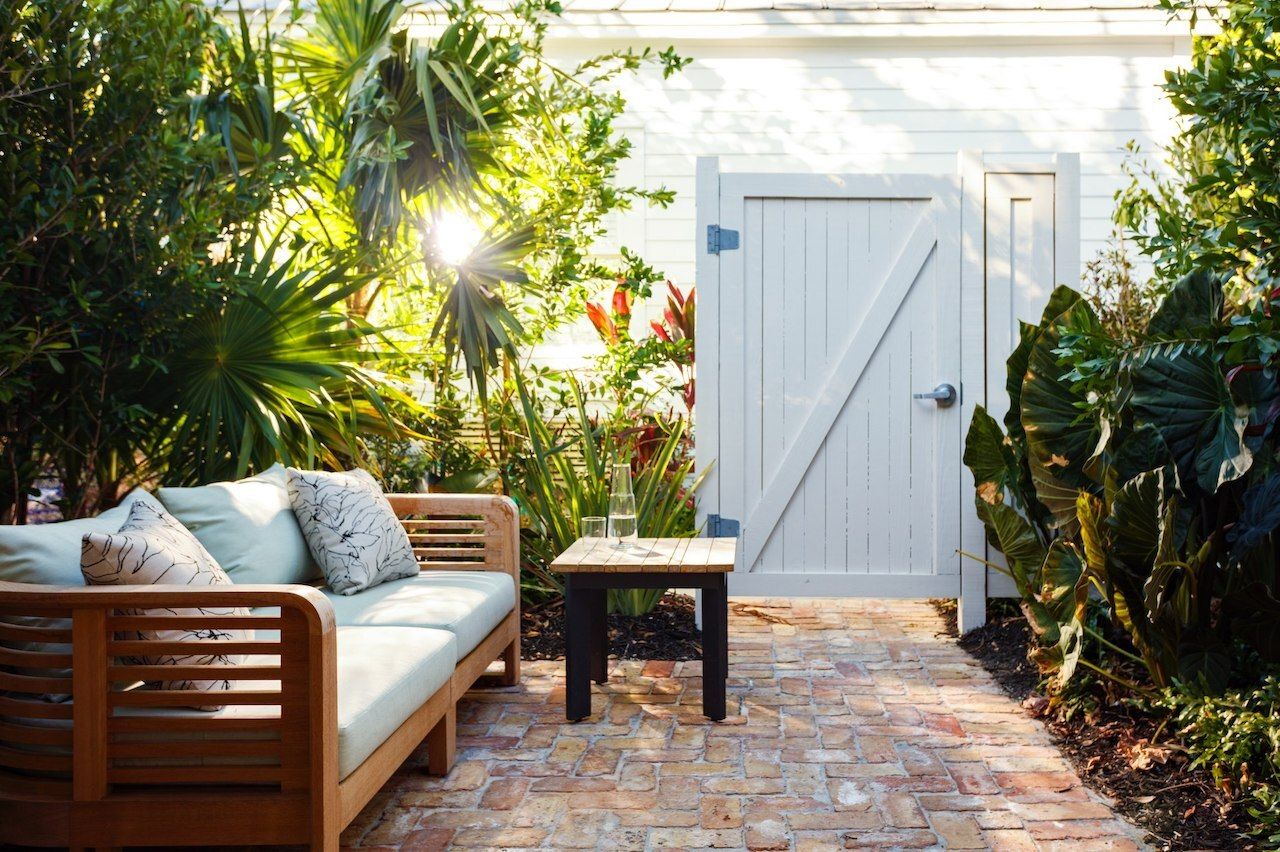 The Keys culture of sustainability isn’t exclusive to eco tours and environmental scientists. Even big corporate hotels understand that, in order for the Keys to stay in business, they need to be at the forefront of ecological preservation.

When Kimpton, owned by hospitality giant IHG, came into Key West and opened a whopping six new properties on this seven-square-mile island, it looked to do more for the environment than foregoing plastic straws.

Kimpton’s Winslow’s Bungalows, for instance, which was converted from a collection of historic Key West cottages, weren’t allowed to change much about the facades to maintain historic integrity. But it did import epic gardens of native plants to help keep rooms shady and cool, which cuts cooling costs in the high-ceiling cabanas.

It also installed shower pans made out of recycled plastic bottles, replaced old wood with eco-friendly ipe wood, an extremely hardy, long-lasting Brazilian variety. You won’t find plastic bottles or traditional plastic utensils at the Kimpton. And employees participated in beach and mangrove clean ups, as well as painting storm drains to warn people not to dump there.

“During COVID there were no boats or cruise ships running here, and we saw how clear the water got,” Kimpton sales director Megan Cassitto says. “We saw natural life come back. We saw how impactful pollution is and how it can hurt, but we need people coming back to survive. This is our livelihood, and if we don’t take care of the sea life, there goes the restaurants. There goes the tourism.”

Kimpton also partners with Honest Eco to send its guests on a more educational kind of day cruise, and Cassitto says the guest response has been overwhelmingly positive.

Florida, at least in the Keys, understands perhaps better than any state on the mainland how environmental integrity contributes to economic prosperity. And for every story about Florida phosphate plants unleashing tons of polluted water into the ocean, there are also people trying to keep the place close to the natural wonderland that drew them here. While the Keys will always have its raucous side, the scene on the Fury’s snorkel tour may be a look at the new Florida. One where an afternoon of rum punch comes with a lesson in sustainability.

SustainabilityThe Florida Keys Are Leading the Charge on Sustainable Wildlife Tourism in the US
Tagged
Beaches and Islands National Parks Sustainability
What did you think of this story?
Meh
Good
Awesome

Samantha Brown's Top 5 Valentine's Day Getaways in the US