Like a small, bright light in all the darkness, amid the planet’s climate-change-induced death throes, wildlife tourism is taking a turn for the better. Social media has made unethical animal entertainment practices visible to the point of causing mass public outcry, leading to tangible changes in the industry. Theme parks are ending their orca and dolphin shows, circuses are weaning animals out of their lineup, and even zoos are focusing more on rescue and rehabilitation. As awareness of the terrible atrocities that make traditional wildlife tourism possible grows, sustainable, ethical approaches are becoming more widespread among travel destinations.

Just look at the Florida Keys. An island chain built on ancient coral, the Keys were once home to the Indigenous Calusa people before becoming a major stop in the Caribbean during the pirate days. Colonization altered the relationship between land and people from a symbiotic one to a destructive one, but even as the Keys rose in prominence as a popular tourist destination, consideration of the state of the wild was forefront. 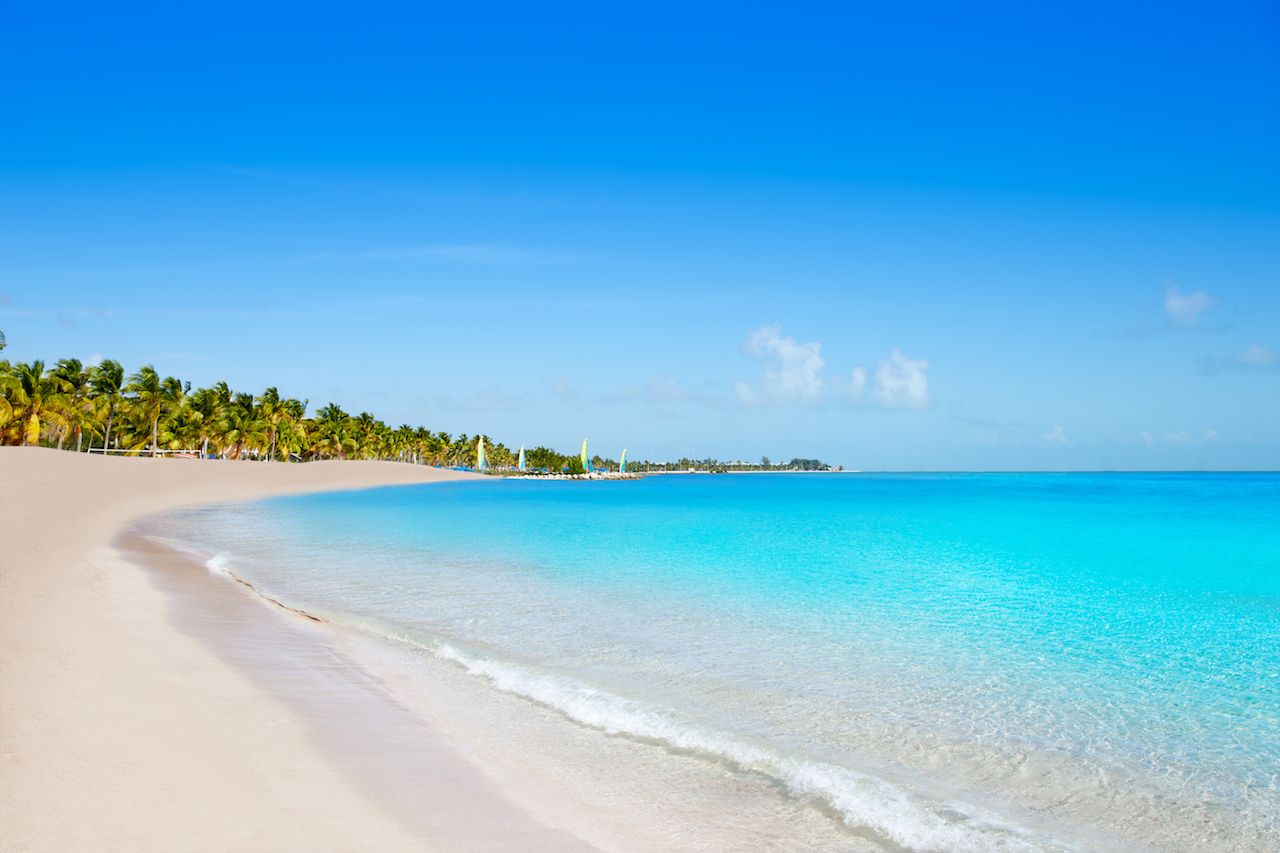 Even so, the Florida Keys are feeling the hurt of humanity’s impact on their environment, which is why communities are banding together to ensure their legacy. Although towns like Key Largo, Islamorada, and Key West are functionally independent of one another, each is addressing the ways in which sustainable wildlife tourism must be prioritized in a cohesive manner. After all, boundary lines don’t make a difference when it comes to the health of the offshore Florida Reef, considered the third largest barrier reef in the world.

It’s recent changes in the reef that have rung alarm bells for the Florida Keys. In fewer than 40 years, the Florida Reef has been reduced by a whopping 97 percent, according to the Coral Restoration Foundation in Key Largo. Not only have wildlife numbers been greatly reduced, but the loss of these coral ecosystems also increases the havoc wreaked by annual hurricanes, most recently Irma, which left much of the Keys flooded in several feet of water and without communication for many days.

Stakeholders in the area are taking these threats seriously, understanding that ecosystems don’t function without all members accounted for. If the Florida Keys want their protective reef back, then they must ensure that their 2.5 million annual visitors are leaving the wildlife of the Keys better than when they found it. And considering the role wildlife plays in the Florida Keys’ $2.7 billion tourism industry, there is significant incentive to protect these shared natural resources.

But wanting wildlife tourism to be sustainable isn’t the same thing as actually doing it, which is what makes the success of the Keys so remarkable. Baker’s Cay Resort in Key Largo has taken significant steps to not only reduce their footprint on the environment but also make it easier for their guests to do their part in not harming the surrounding waters. By offering free reef-safe sunscreen throughout the property, using harmful sunscreens is no longer the easiest option for sun protection. Down in Key West, the sale of sunscreens with the reef-poisoning chemicals oxybenzone and octinoxate will no longer be allowed for sale by 2021. This gives the reef and the animals that live there a fighting chance to recover from the damage done. 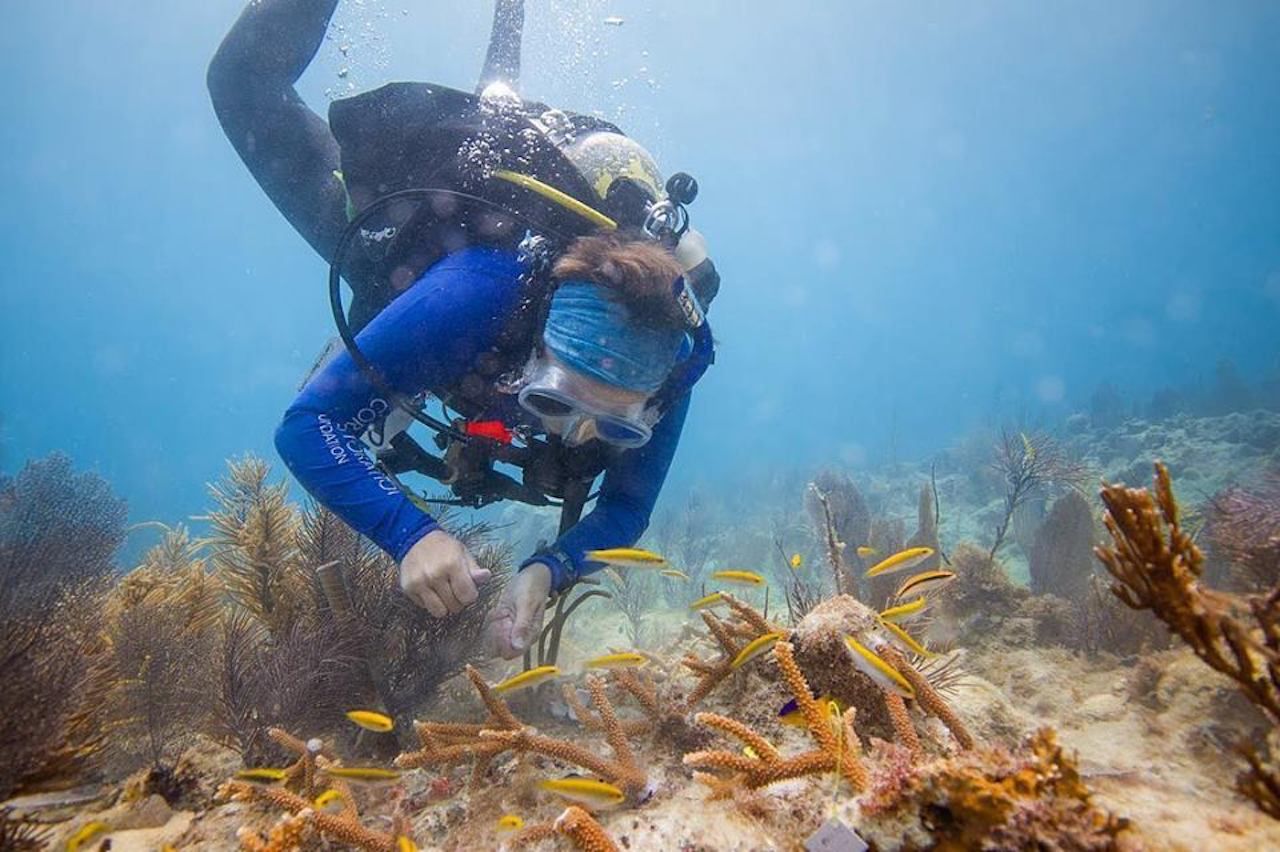 Similarly, Coral Restoration Foundation provides opportunities for visitors to the Florida Keys to have a direct impact on rebuilding the reef. Their research includes creating coral nurseries and planting coral back into the wild, and their dive programs allow volunteers to get in on the action. It’s sustainable wildlife tourism at its finest: Not only are divers witnessing the beauty of the Florida Reef system, but they’re also actively leaving it better than they found it. 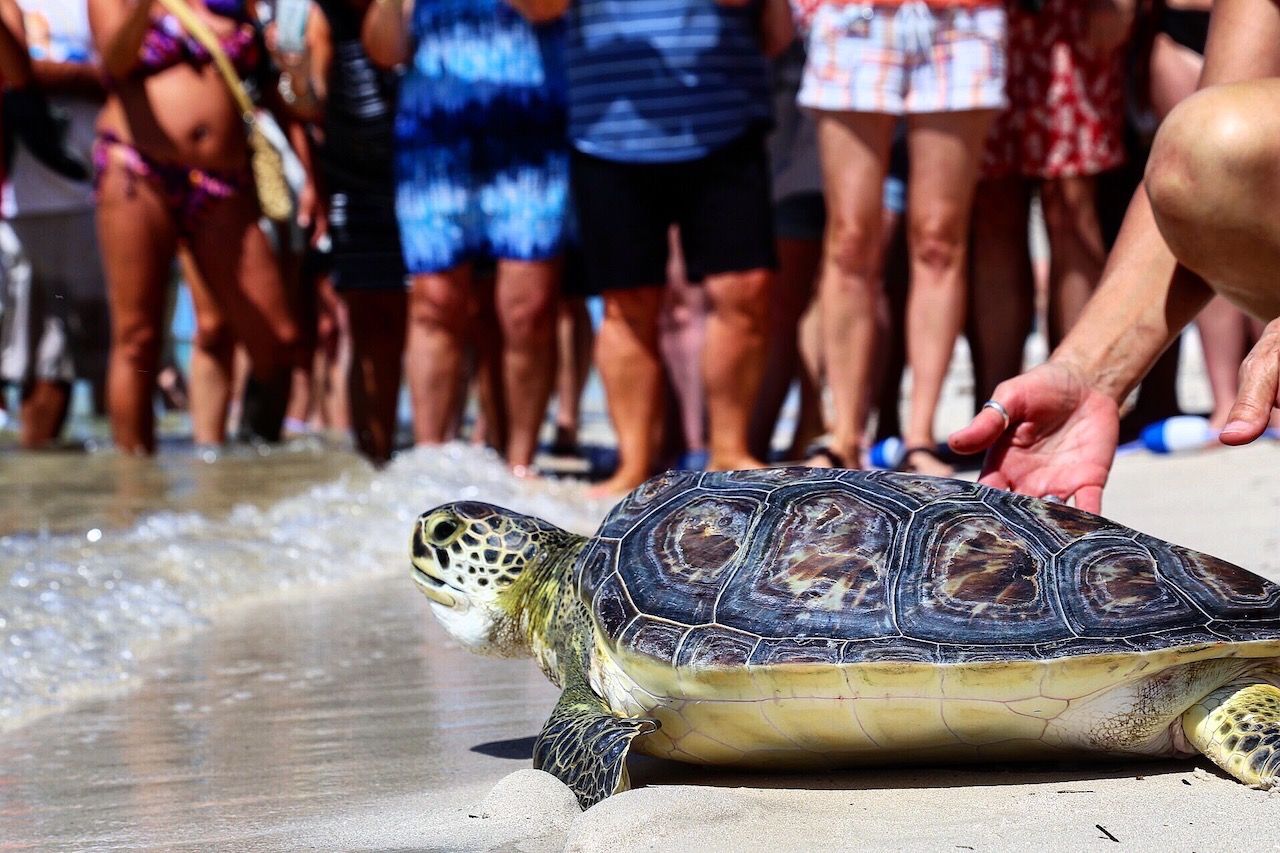 The Turtle Hospital in Marathon, which rescues and rehabilitates injured and sick sea turtles, is another Florida Keys organization that is changing the way tourists engage with wildlife. People can get up-close and personal with these incredible creatures by witnessing them in recovery at the hospital or during their releases at nearby beaches, which the hospital announces on their websites. Instead of caging these wild animals for entertainment, the Turtle Hospital has shifted the narrative of wildlife tourism to celebrate the wildness of turtles. 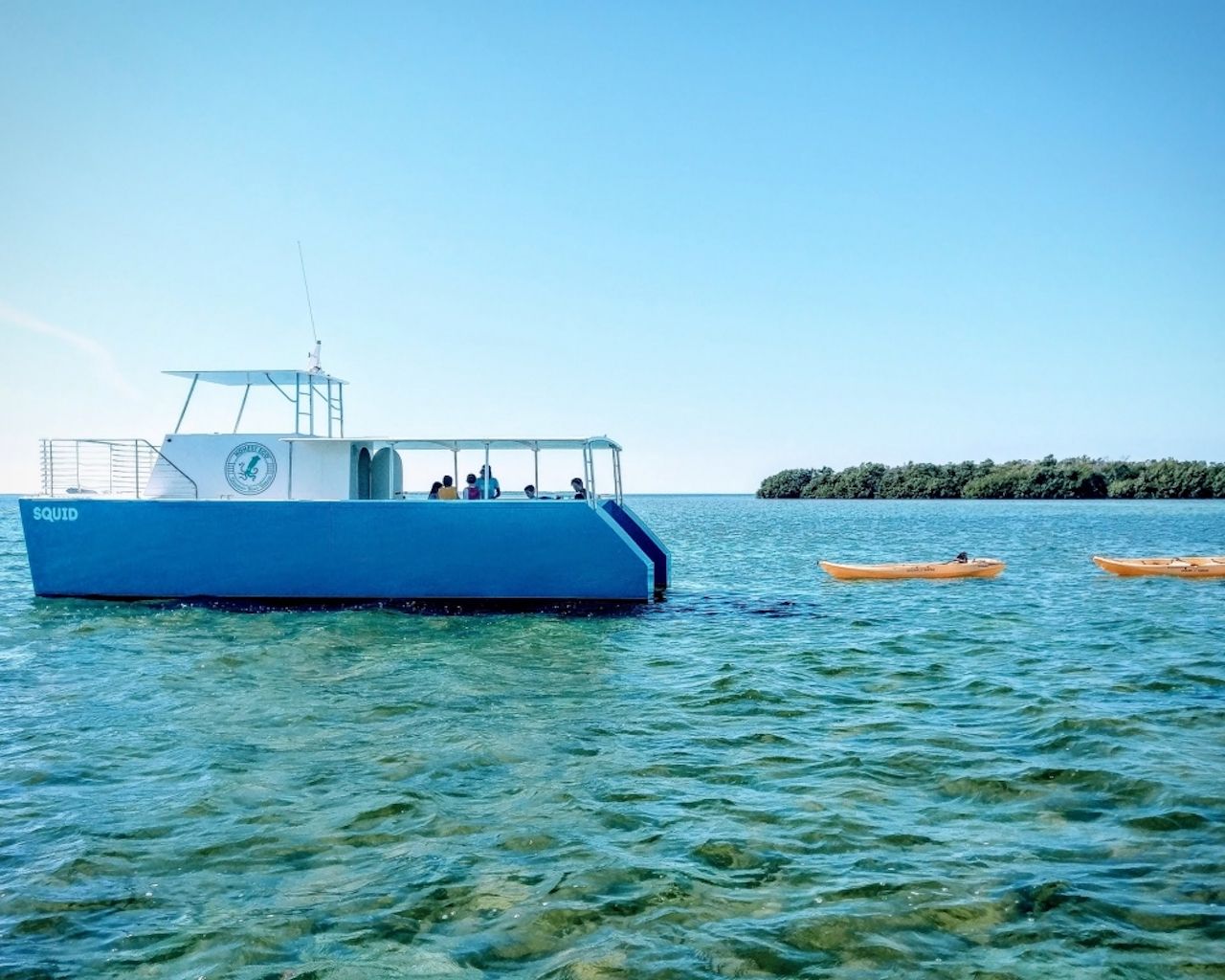 Out on the ocean, the dedication to sustainable wildlife tourism is growing as well. The folks at Honest Eco Tours were frustrated with the way typical dolphin-watching excursions prioritized people over animals and went on to engineer a watercraft designed to put dolphins first. Key West’s first electric tour boat, the SQUID makes little wake and little noise, avoiding large groups of boats so as not to overwhelm the sea life. If every tour operator were to follow suit, the dolphins would be much happier. 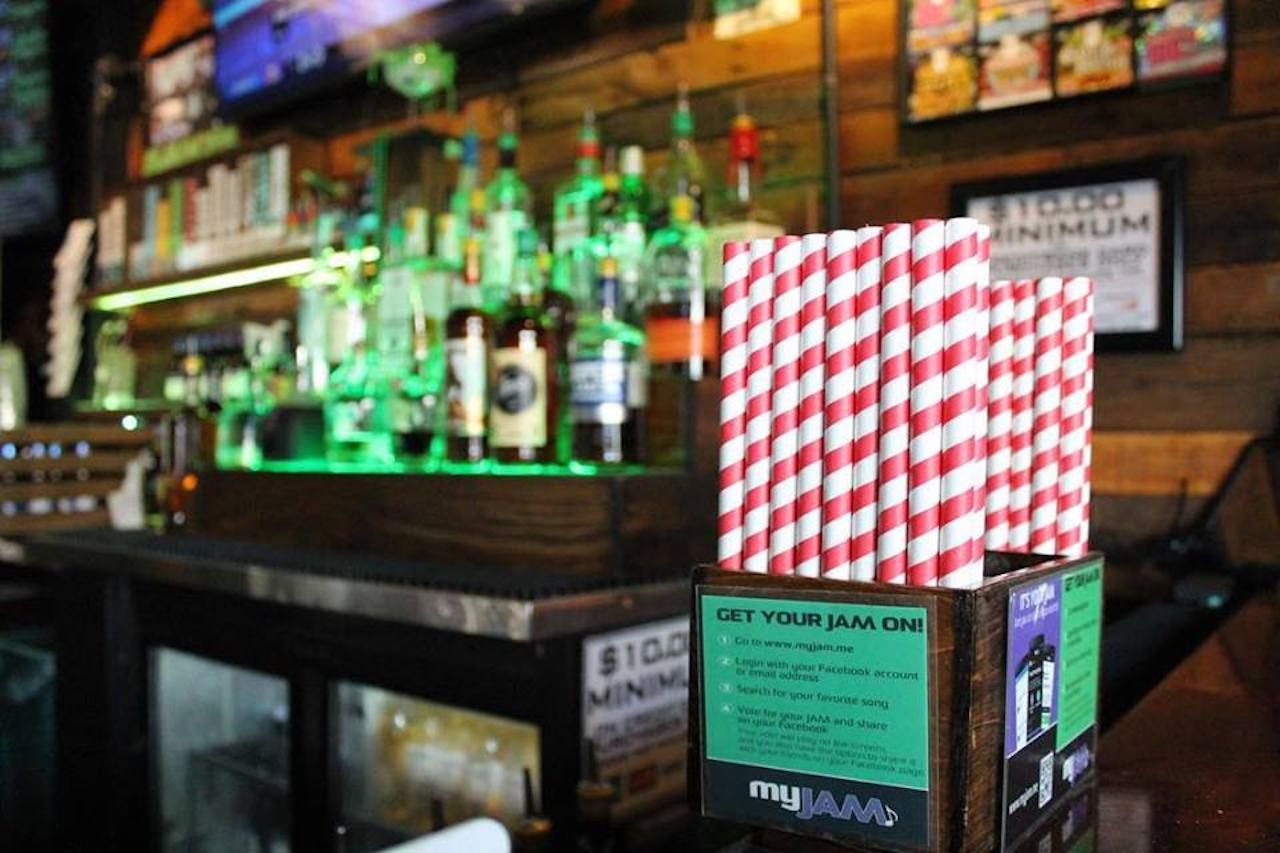 Onshore there is a surge of eco-innovation going on. The Green Room in Key West is a raucous bar in the heart of downtown that puts the environment first, with upcycled decor, biodegradable straws and recyclable cups, and cigarette butt disposal that will likely become a model for bars worldwide. Plus, it donates up to 10 percent of proceeds to local environmental initiatives. And there are restaurants like Castaway back on Marathon that serve up the invasive lionfish, keeping it from preying on young fish that the reef needs to thrive.

Sustainable wildlife tourism is more than just taking an ethical approach to engaging with the animals we most want to see, shifting towards only looking instead of touching, and never caging. It means investing in the entire ecosystem from bottom to top. The Florida Keys recognize that if they want to maintain their role as a wildlife destination, it starts with ditching plastic, enforcing non-toxic sunscreen use, and engaging visitors to participate in their eco-friendly vision for the future.

ActivismCan We Stop Visiting Animal Attractions? Here’s Why, and Here Are Better Alternatives
Tagged
Sustainability Wildlife Florida, United States
What did you think of this story?
Meh
Good
Awesome