When Matador staffer Elisabeth Sherman made plans to fly at six months pregnant, she took precautions. She booked an aisle seat to assuage the frequent urination that’s associated with pregnancy. She wore compression stockings on the plane to prevent blood clots. She even had her midwife sign a letter acknowledging that Sherman understood the risks of flying at that stage of pregnancy, although she was assured that there were none, and stating that she was medically cleared to fly should her airline require it.

In the age of ubiquitous air travel, Sherman is one of countless women to fly while pregnant — and have questions and concerns about doing so.

“Flying has become commonplace during pregnancy for many reasons, says Dr. Michele Hakakha, a board-certified OBGYN with over 20 years of experience in private practice in Los Angeles, an attending physician at Cedars Sinai Medical Center, and the author of Expecting 411: Clear Answers & Smart Advice for Your Pregnancy.

Traveling for work, going on a babymoon, and visiting loved ones are among these reasons. “All of this is possible because air travel during pregnancy is safe,” says Hakakha, “albeit for a few caveats.”

To address these caveats, answer the most commonly asked questions about flying while pregnant, dispel any myths, and source tips for making air travel as comfortable as possible for pregnant travelers, Matador reached out to Dr. Hakakha to get the inside scoop onboarding a plane with a baby on board. Here’s everything you need to know about flying while pregnant, according to an OBGYN.

Is it safe to fly when you’re pregnant? 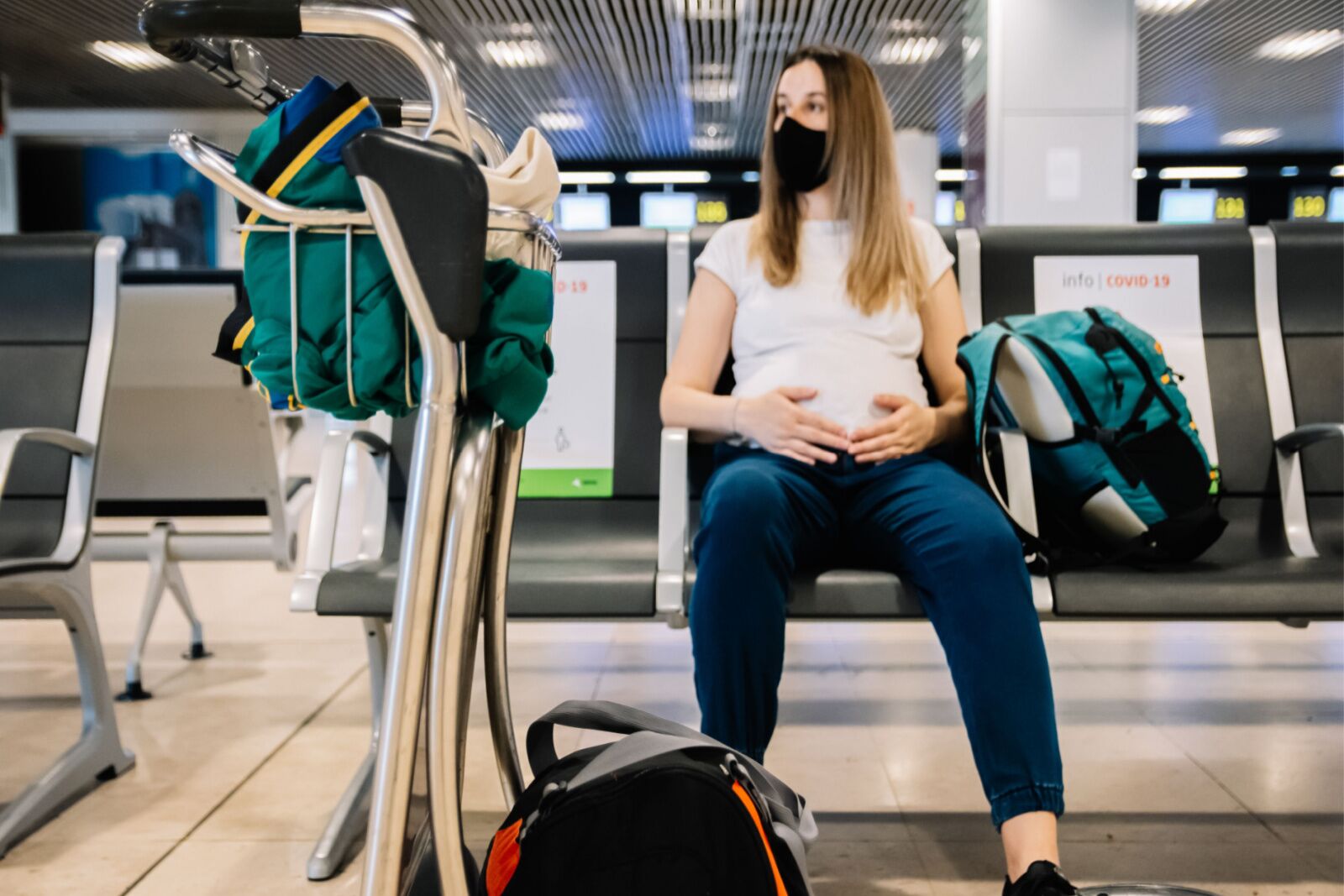 The number one question pregnant travelers have about air travel is whether or not it’s safe to fly. Some may have heard rumors about potential harm, such as exposing a fetus to a TSA machine. Others may be concerned about possible side effects.

“First, let’s dispel the myths,” says Hakakha. “Pressurization is not an issue because all cabins are pressurized. The radiation associated with travel, cosmic radiation, is negligible and not dangerous.” Hakakha also notes that there’s no reason to avoid TSA machines, although some pregnant travelers request to be patted down instead. “There’s no danger of walking through the machines in the TSA line because they are just metal detectors with no associated radiation.”

As legitimate concerns go, Hakahka identifies two main risks of flying during pregnancy. The first is experiencing unforeseen complications while you’re in the air, such as preterm labor, bleeding, and preterm rupture of membranes, which might necessitate an emergency landing. The second risk is developing a blood clot, most commonly a deep venous thrombosis, which could result in a life-threatening pulmonary embolism if the clot prevents blood flow to part of the lung.

“These are both very rare,” assures Hakakha, “but I suggest to patients that they wear thigh-high compression stockings while traveling to help prevent the latter complication.”

Is it safe to fly during a high-risk pregnancy?

“There are many reasons that a woman could be carrying a high-risk pregnancy,” says Hakakha, noting that only some of these reasons could impact air travel. “Having gestational diabetes, for example, is considered a high-risk pregnancy but would not be a contraindication to flying.” Other high-risk pregnancies might require stricter travel guidelines. Carrying triplets or having a placenta previa diagnosis, wherein the placenta partially or completely blocks the cervical opening where the baby will be born, are two such examples.

“It’s always best practice to check with your medical provider before booking a flight during pregnancy,” Hakakha says.

How late in pregnancy can you fly?

Most commercial airlines have cutoffs for when pregnant travelers are allowed to fly. Most airlines also have policies in place in the event that air travel is necessary when you’re nearing your due date.

United Airlines, for example, requires an obstetrician’s note certifying that you’re fit to fly after 36 weeks. American Airlines requires a doctor’s note if you plan to fly within four weeks of your due date, with additional specifications for domestic versus international travel. Delta Airlines, on the other hand, has no restrictions in place.

Anecdotal reports suggest that these policies are not strictly enforced, but you should always check to see what rules your airline outlines about flying while pregnant and be prepared to get medical clearance within 48 hours of your flight toward the end of your third trimester.

While 36 weeks is the magic number for most airlines, Hakakha cautions against flying earlier than that. “There’s no hard and fast rule about this,” she says, “but in my practice, I usually discourage air travel after 34 weeks for all flights because there’s a higher risk of some complication happening at that point in pregnancy, specifically labor.”

Regardless of when you’re flying, Hakakha also recommends having your bases covered when you land. “It’s not a bad idea to ask your doctor or midwife for a referral to have a medical practitioner and hospital lined up at your destination,” she says. “Just in case.”

Should you avoid airplane food or certain beverages while pregnant?

Airplane food is notoriously high in sodium. This is one reason why Hakakha recommends packing your own snacks if you’re pregnant, such as sliced fruit or low-sodium protein bars. But she also notes that eating well during air travel well starts before you board.

“Avoiding salty foods in the 48 hours before flying, as well as on the flight, will help prevent lower extremity edema,” says Hakakha. (Edema is the medical term for swelling.) The same goes for foods that might make you gassy, such as beans, broccoli, and carbonated drinks. “Entrapped gas expands at higher altitudes and can cause bloating and stomach pains,” Hakakha explains.

In addition to alcoholic beverages, this also means that you should avoid carbonated and caffeinated drinks during your flight as they can make you bloat and need to use the restroom more often.

“If you’re in the early part of pregnancy and are suffering from nausea and vomiting, air travel may make things worse,” says Hakakha, who recommends waiting to fly until you’re in your second trimester.

If you do decide to travel during your first trimester, her advice is to ask your medical practitioner for anti-nausea medication to keep on hand.

Tips for flying while pregnant 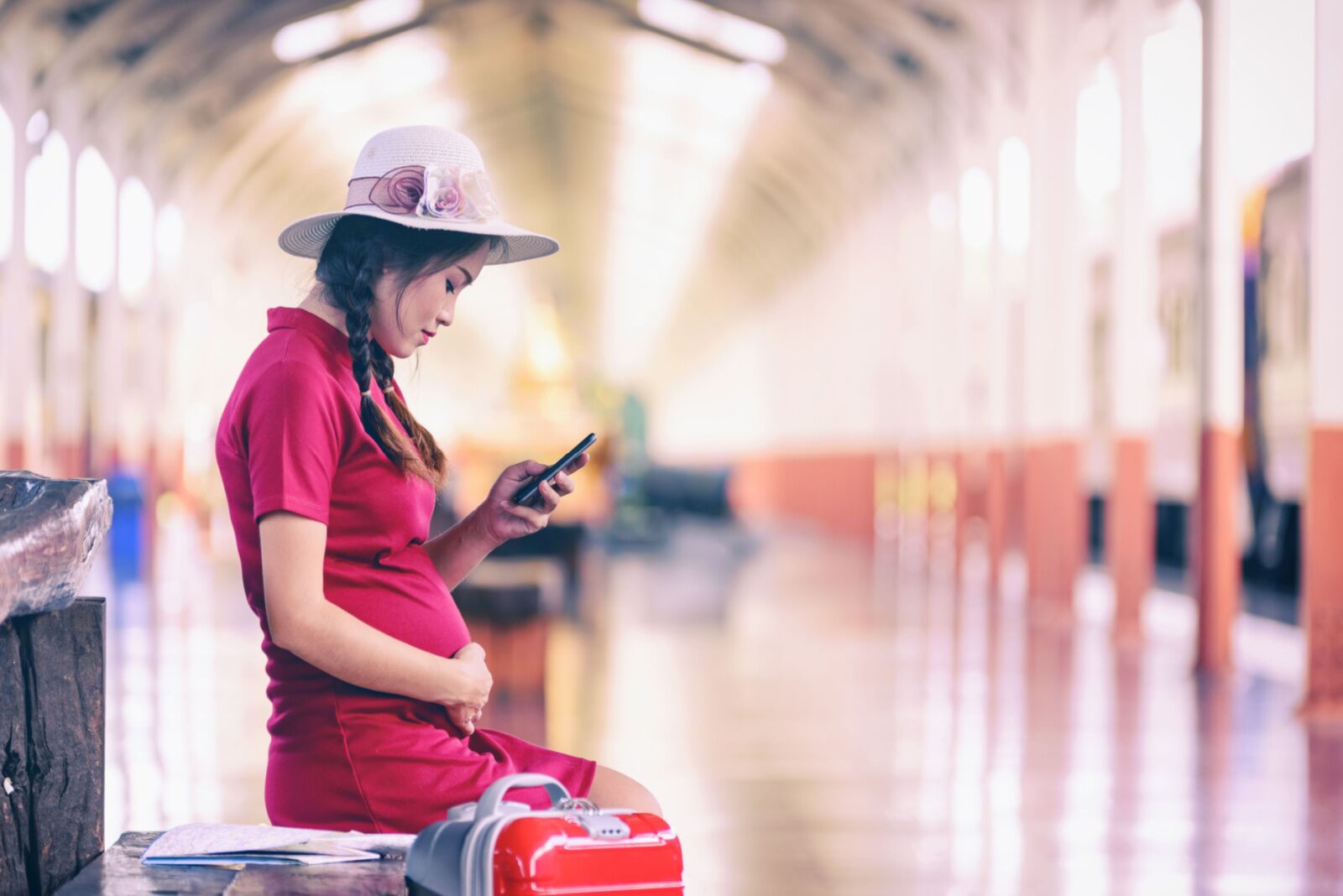 Wear your seatbelt: Whenever you’re seated on an airplane, Hakakha recommends keeping your seatbelt fastened, noting that it should lie as low as possible beneath your belly rather than across it. “Air turbulence is unpredictable,” she says, “and having your belly hit the pull-down table or anything else could be dangerous.”

Walk around: Walking around the airplane cabin when it’s safe to do so is another way to increase circulation and prevent blood clots while flying. “Elevating your feet and flexing your calves” can also help prevent swelling and blood clots in the lower leg, says Hakakha.

Book an aisle seat: “Aisle seats are definitely favorable for easy access to the bathrooms and for the frequent walking that’s recommended,” says Hakhaka. “Also, if you’re already a mother and have a toddler you’re traveling with, it’s easier to move around with them during the flight.”

Pack smart: There are several carry-on items that can make flying more comfortable. These include snacks, an eye mask for long-haul or overnight flights, and air pods or noise-canceling headphones. “Another good piece of advice would be to take a copy of your prenatal record, which includes testing and lab work, with you,” says Hakakha. “If there’s an issue not only on the flight but also while at your destination city, these can be very helpful for anyone taking care of you.”

Stay hydrated: “Lots of plain water is always a good idea,” Hakhaka says, noting that increased hydration the day before you fly can even help prevent jet lag if you’re changing time zones.

WellnessYour Partner Deserves an Epic Babymoon. Here’s How To Plan One.
Tagged
Airports + Flying
What did you think of this story?
Meh
Good
Awesome