The most extreme outdoor expeditions are limited only by natural obstacles and the physical abilities of their participants. This is as true with vehicles as with the athletes themselves. While some aren’t up to the task, those with a keen attention to detail, acute discipline, and meticulous route finding techniques rise to the top.

“I’d always found that the harder a place was to get, the more I enjoyed going there,” professional climber, photographer, and filmmaker Jimmy Chin says in a new mini-documentary from Ford starring himself and a new travel companion, the 2021 Ford Bronco two-door. Chin, who directed the award-winning documentaries Free Solo and Meru, would know — he moved into his car at age 20 to pursue his outdoors passions full-time.

“Because there’s a process to it. Some of the most interesting challenges come just trying to get there.”

Chin is spot on. One has to actually get to those places in order to explore them. Short of lugging a pack full of gear up a barely routable off-road track just to get to the base of a pitch or trailhead, access is often among the most logistically challenging parts of planning an excursion. The Ford Bronco, remade for 2021 in the first new release of the classic SUV since 1996, is set to give the outdoor community access to overland adventures as we’ve never had before.

Ford went back to the drawing board to actually make an off-road-capable SUV that stands out. 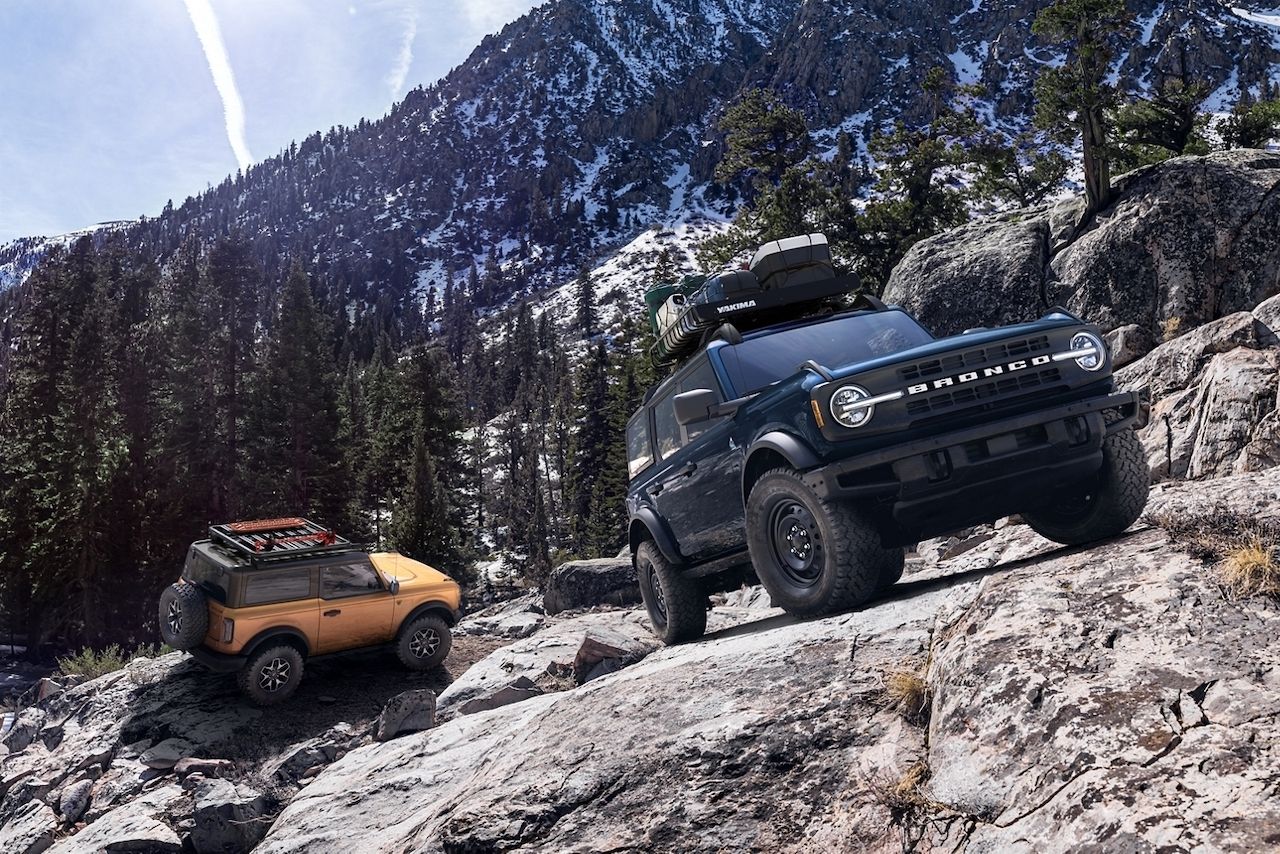 Ford broke the 2021 Bronco down into three models — a two-door, a four-door, and a Sport model that is a unibody crossover SUV, a la the vehicles already parked in the driveways of recreationists across the American West. All three are built to romp with a live axle and a mechanically locking 4×4 system. As a body-on-frame SUV, the Bronco has always been known for its balance. These new models aim to put the Bronco head-to-head with the Jeep Wrangler for off-road stardom, and with athletes like Jimmy Chin already raving about them, Ford appears to be rekindling the devout club of supporters it will need to rival Jeep. Ford still needs to develop a “wave” for its fans to flash as they romp by one another, though let’s not get ahead of ourselves. The vehicle won’t even be released until the Spring of 2021.

The 2021 Broncos have full-time four-wheel-drive systems.

Subarus are known for their full-time AWD (or All-Wheel Drive) systems, a distinguishing characteristic that the new Broncos actually one-up. The Broncos come with full-time four-wheel-drive systems — more burly and functional in off-road situations than its competitors. The front driveshaft disconnects on demand from the driver, allowing the vehicle to drive more efficiently on the highway and in cities. The four-wheel-drive system, as we noted above, locks the speed of the front and rear axles for maximum balance and traction off-road. And, for when winter conditions make even driving on paved surfaces a challenge, the Broncos have an All-Wheel Drive setting that helps drivers maneuver slick hills and avoid sliding when pushing the brakes.

The Bronco is all-in on overlanding prowess. 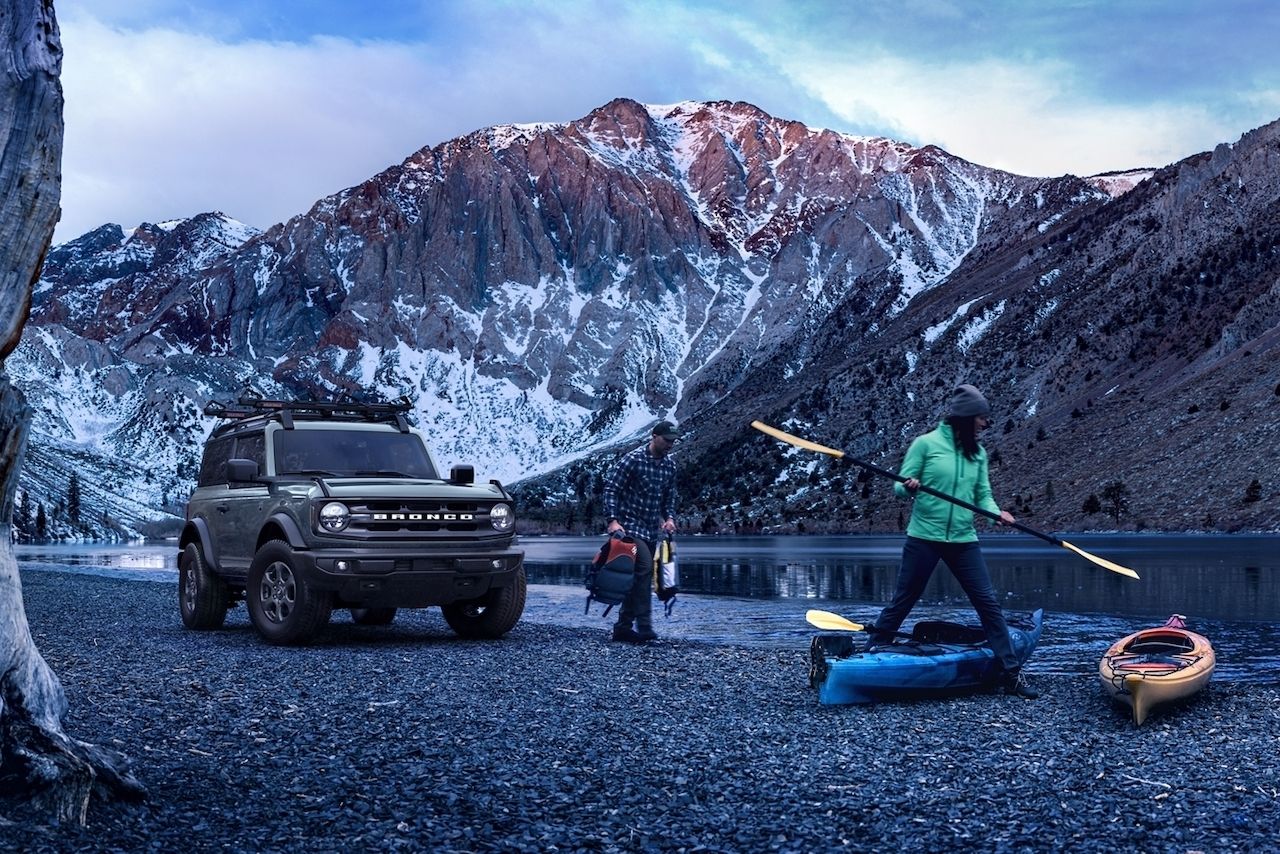 The 2021 Ford Bronco is a lot of things — burly, strong, and capable, to name a few. One thing the Ford Bronco is not is a “poser.” All of the models are designed to be top-tier machines for overland travel. The smallest of the models, the Bronco Sport, comes equipped with a 185 horsepower, 1.5-liter turbocharged three-cylinder motor that can be upgraded to a 2.0-liter turbocharged four-cylinder engine that kicks out 245 horsepower. The larger two-door and four-door models will come off the line with a 2.3-liter, four-cylinder, turbocharged motor that puts out 270 horsepower, a firm best-in-class.

Some serious torque comes out of each of these motors, as well. Three hundred ten pound-feet on the two and four-door options, and 190 pound-feet on the standard Sport option. In off-road scenarios, think of torque as the vehicle’s ability to “claw” its way forward. While “clawing” isn’t something to talk about in speed-focused street cars (neither is a four-cylinder engine, but that’s another story entirely), it’s exactly what you want when adventuring in the backcountry. The ability to power down uneven Forest Service roads or over debris and bumps is exactly what the Ford Bronco is built to do, and it does it like no other street-legal SUV on the market. Driving any one of these means you’ll be the first one to that pitch or trailhead, every time.

It’s equally cool when driving and when parked. 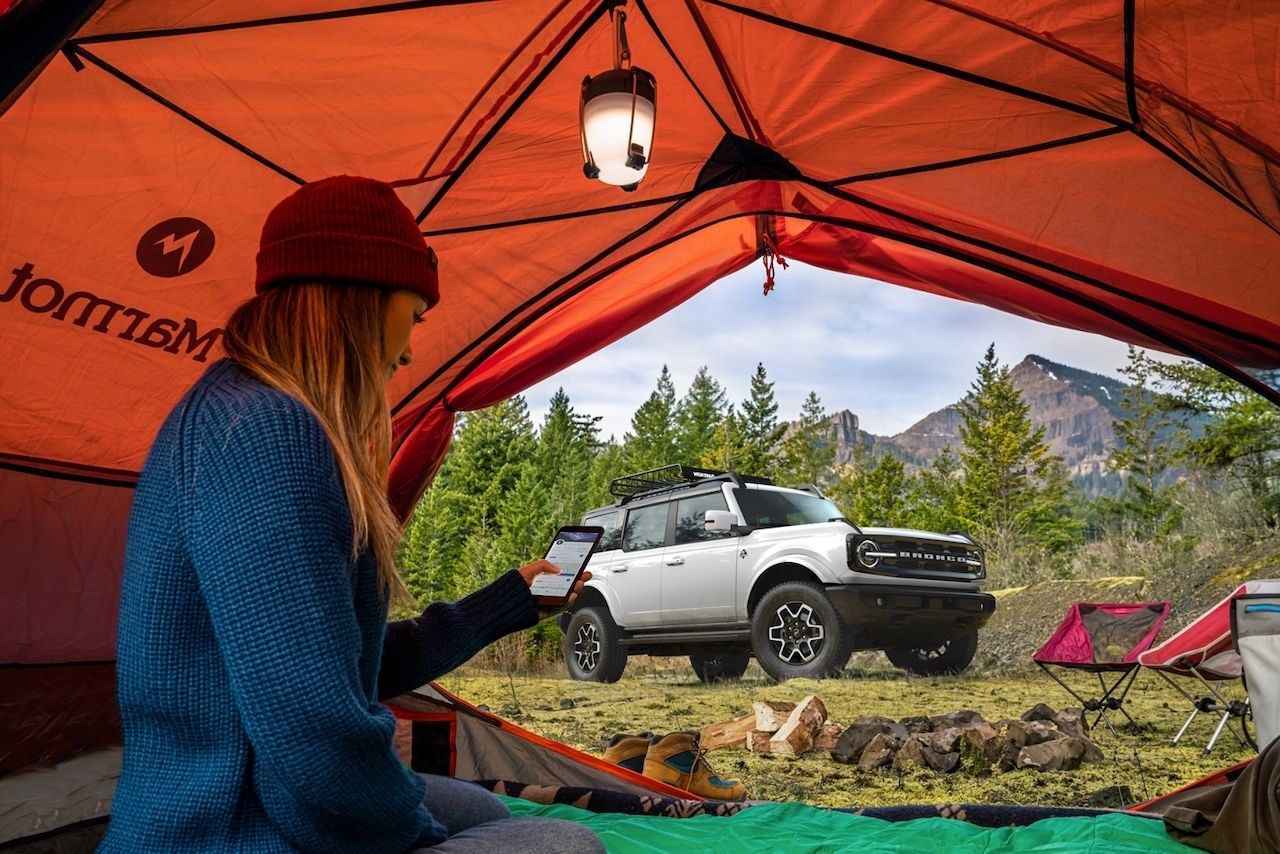 Admit it. You eye with jealousy every door-less vehicle you pass on the road. Their ride may be 20 years old — but darned if it isn’t still stylish as hell.

The Ford Bronco offers that freedom. Both the two- and -four-door Broncos have removable doors and roof panels, meaning you can roam while gazing at the stars or accurately gauge your approach to a forthcoming pile of rocks in the road. Both the doors and the panels stow in the vehicle, keeping drivers prepared for that sudden rainstorm or reclined-seat camp.

As a standard amenity, two 27.5 inch mountain bikes can stand upright and mounted in the trunk of the Bronco Sport, something that to our knowledge no other vehicle offers. All you have to do is remove the front tires. The Sport also features LED scene lights on the vehicle’s rear that can keep either a campsite or basketball court lit at night.

And you don’t have to pay an arm and a leg to feel the stoke. The Sport model starts at $28,155. The two- and four-door full models start at $29,995 and $33,200, respectively. Should you opt to ramp up, 35-inch tires are optional but boost the approach angle to 43.2 degrees, putting the vehicle in the top of its class in terms of slopes it can ascend. It can also move through 33.5 inches of water depth, officially making the Ford Bronco one less member of your expedition crew that you have to worry about.

OutdoorThese Colorado Ski Resorts Will Be the Highlight of Your Family Summer Road Trip
Tagged
Outdoor Road Trips
What did you think of this story?
Meh
Good
Awesome