Fort Lauderdale Beach was the birthplace of spring break, and despite the city’s efforts to shoo it elsewhere, it still lives on. On any given day, you can saunter into any one of the many Fort Lauderdale beach bars and find yourself next to someone who came on spring break in 1981 and never left. And they’ve got the football-colored skin to prove it.

People like that are part of why drinking on the beach in Fort Lauderdale is as much about the colorful characters as it is the tropical drinks. You’ll find everyone from old-timey locals to live performing mermaids in bars that run the gamut from dives to upscale cocktail lounges in the Ritz Carlton. No matter your style, there’s a Fort Lauderdale bar with views of the Atlantic Ocean for you.

Any discussion of beach bars – or any bars – in Fort Lauderdale must always begin with the Elbo Room. This landmark beach dive on the corner of Las Olas Boulevard and A1A has been around since 1939, serving sunsoaked bad decisions to visitors and “colorful” locals as the city grew up around it.

During high season, it’s ground zero for spring break, a title it first gained from its appearance in the spring breaker movie Where the Boys Are that was then cemented with an iconic Life Magazine photo of a student hanging from a street sign. Even when America’s best and brightest aren’t downing tequila shots at the bar, Elbo Room hosts live bands and daylong beach parties that draw all walks of life. The ocean view from the top deck is one of the best in Fort Lauderdale, too.

Blondie’s would stand as one of America’s great dive bars even without a beach across the street. It’s a place where you wander in off the beach at 2:00 PM, order a beer and a shot, and somehow end up walking out at midnight. Sobriety is not the strong suit of anyone sitting inside, partly because many of said barflies have likely been posted up on their stool since the place opened at 11:00 AM.

The bar’s back section is filled with pop-a-shot machines and other arcade games, which are especially entertaining to watch when people who can’t see straight attempt to play. Blondie’s isn’t a beach bar to soak up the sun, but if you want to hide from the sunshine, no beach bar in Fort Lauderdale is better. 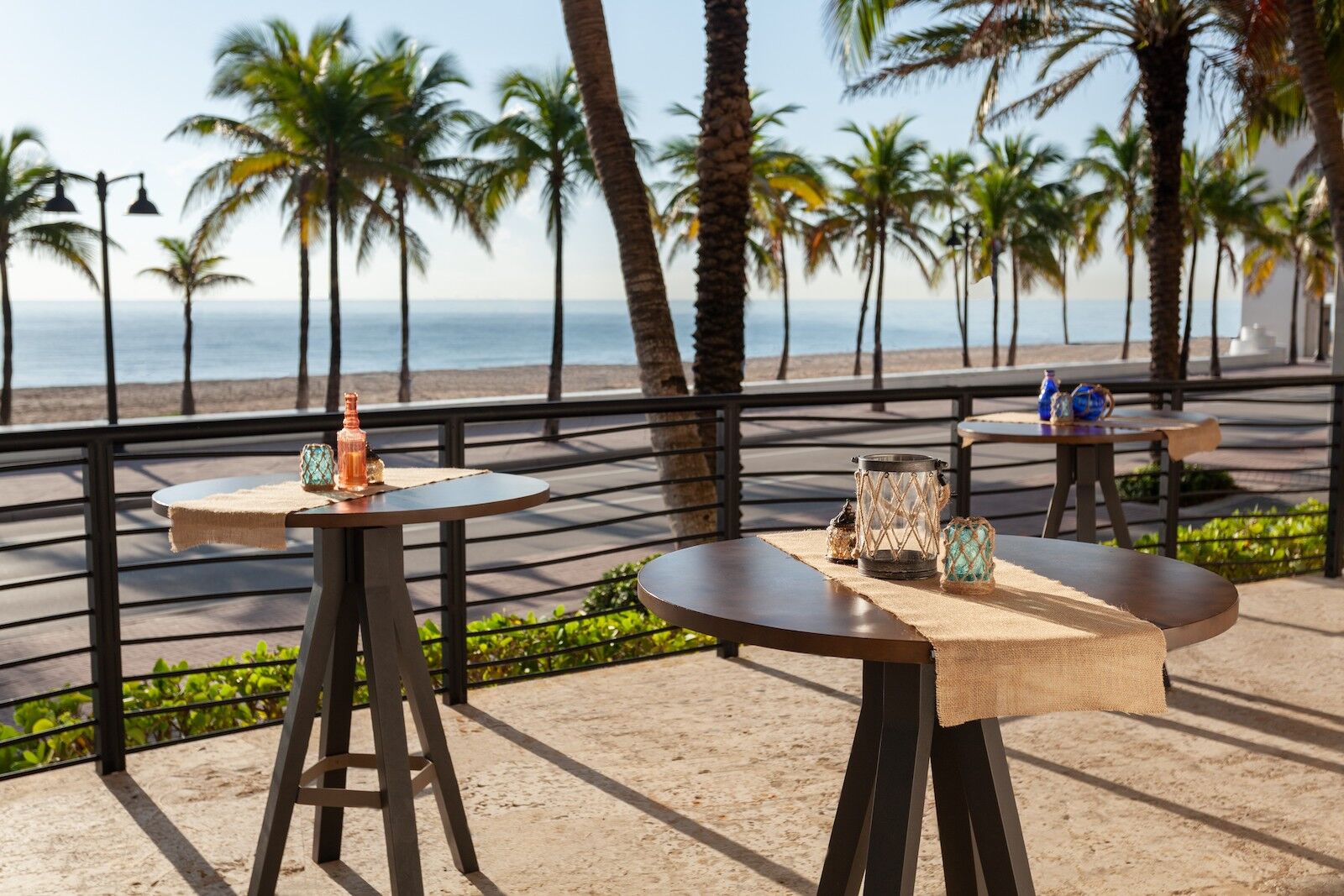 On the other side of the beach bar spectrum from Blondie’s is Burlock Coast, a rum-heavy cocktail bar and restaurant on the front patio of the Ritz-Carlton. Is it full of salty beach people who’ll happily regale you with stories about their spring break glory days? No. But does it boast, without question, the best cocktails on Fort Lauderdale Beach? Yes. So if your idea of a great beach bar is sipping rare rums with a front row seat to the ocean, this is the place to go.

The name comes from a bag Captain Bill McCoy used to smuggle rum during Prohibition, and accordingly the lineup of rum drinks is outstanding. The must-try is the Burlock Punch, a secret mix of unusual rums and fresh fruit juices that tastes like vacation in a glass. One is probably enough, but if you want to continue gazing out at the ocean they’ve also got a dozen local craft beers to choose from.

Perhaps no experience is more quintessentially Floridian than witnessing a live mermaid show. You can check both “mermaid show” and “drinking by the ocean” off your Florida to-do list at the Wreck Bar, a landmark ship-themed tavern inside the B Ocean Hotel. The bar is famous for its mermaids, who swim past underwater “portholes” behind the bar with daily family friendly shows.

Admittedly, the Coral Reef mermaid show isn’t exactly Disney with a daiquiri, but it is an entertaining, all-ages revue that kids can go to without raising a lot of uncomfortable questions. But since this is still Fort Lauderdale, those looking for an old school burlesque experience can drop in for the adults-only show at 8:30 PM on weekends. Or there’s the all-male Aquamen Boylesque show, the only underwater men’s revue in America. There’s also a mimosas and mermaids brunch on weekends.

Surprisingly, Fort Lauderdale is a little limited when it comes to tiki bars on the actual beach. If that’s your vibe, you’ll only find it behind the Ocean Manor Resort on Galt Ocean Mile, slightly north of the main strip. Venture behind the resort and you’ll find this funky spot right next to the pool deck, where you can grab a rumrunner cocktail and step right onto the sand.

You may recognize the bar from Season 2 of Bar Rescue, when Jon Taffer came through and transformed it into the Bamboo Beach Club. It’s back to its original name of Bamboo Beach Tiki Bar and Café, but still going strong with a standard menu of beach bites and cocktails. The crowd runs surprisingly local for a resort bar, but ultimately you’ll still be sharing space with plenty of people from out of town. Still, no one seems to care, as the warm tropical breeze and cold drinks makes everyone forget what lies on the other side of the hotel.

On the Emerald Isle, you’d be hard pressed to find a pub with palm trees in the front. But what this beachfront Irish pub lacks in authenticity it makes up for in location. If you’re the type whose idea of a beach day refreshment is a tall pint of Guinness, you can order one at McSorley’s brick-lined bar and then take it outside to continue enjoying the ocean views.

The bar’s rooftop has even better vistas, and at night it turns into a scene of its own. It’s the odd Fort Lauderdale Beach bar that draws locals who aren’t there for whiskey for breakfast. 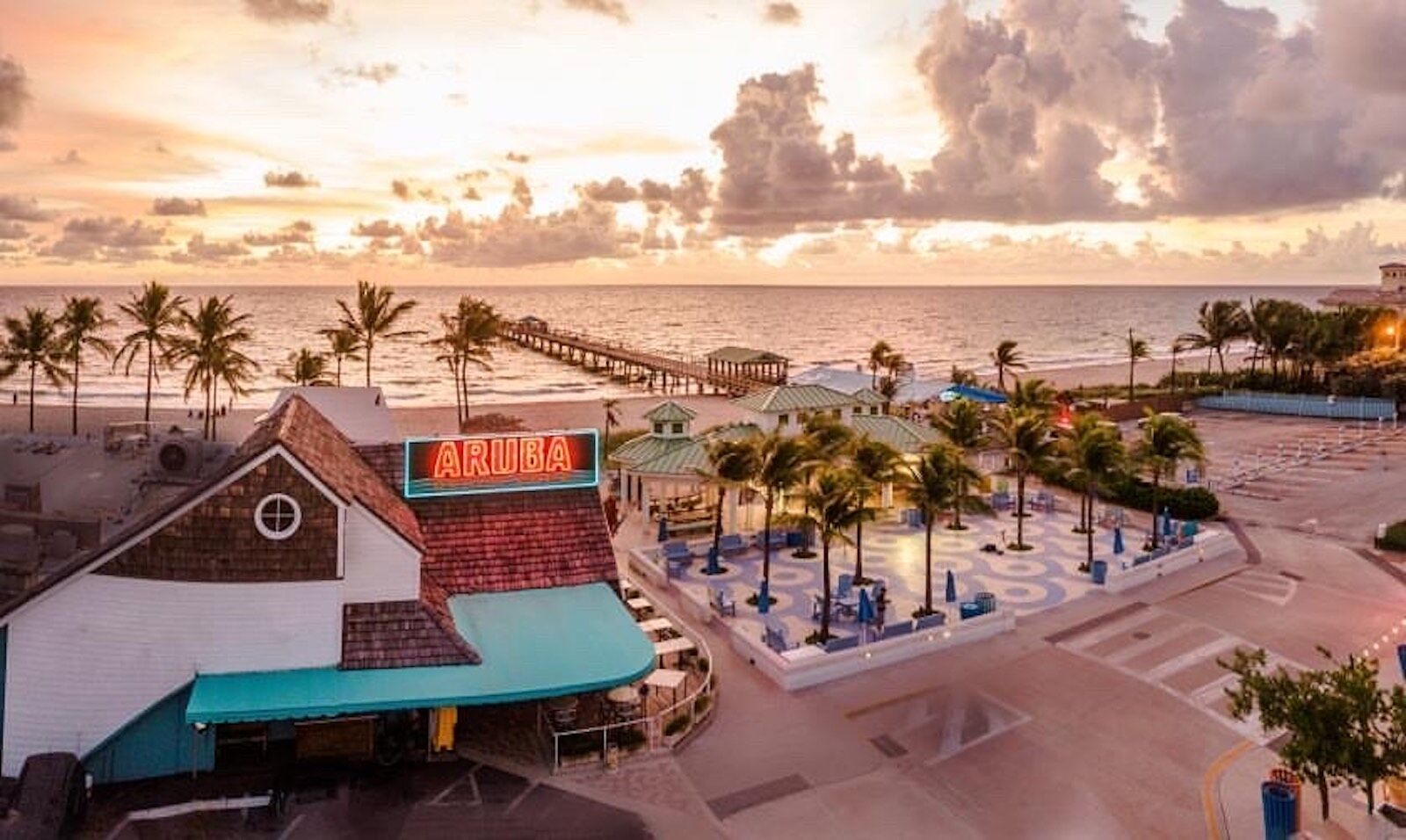 A little north in the seaside hamlet of Lauderdale-by-the-Sea you’ll find Aruba Beach Cafe, the town’s destination beach bar that sits right on the sand. It’s equal parts bar and restaurant, where leisurely lunches with your toes in the sand are the big draw. Or, at least, tied for the biggest draw with the restaurant’s regionally-famous Bimini Bread.

The menu of Caribbean favorites is far more than the sweet and buttery bread, though, with options like conch fritters and jerk chicken wings transporting visitors from Florida to an island in the Caribbean. It’s also a popular after-dive spot for people exploring the wreck park just offshore, but draws families for beach days and sun-seeking tourists as well.

Epic StaysBook These Gorgeous Fort Lauderdale Airbnbs Near the City’s Epic Beaches
Tagged
Beaches and Islands Restaurants + Bars
What did you think of this story?
Meh
Good
Awesome