TO THE BEST OF anyone’s knowledge, the Junkanoo Museum just down the road from the Providenciales airport is the only museum in the world that announces your arrival with a long blast from a conch shell.

It’s the customary welcome from Kitchener Penn from within the lobby of his museum, surrounded by elaborate Carnival costumes. Penn is the leader of the We Funk Junkanoo Band, and right now, he’s blowing a traditional fisherman’s horn once used by local mariners to announce their arrival before the advent of radio.

His museum is a beautiful foray into the culture of the Turk islands that nearly every visitor zooms past in a taxi on their way to a luxurious Grace Bay resort. Most travelers prefer to post up with piña coladas, marvel at the turquoise water, and stay near the resort, forgoing most opportunities for island exploration.

Not to say that’s not a worthwhile vacation for some, but you could easily do that in Florida or somewhere closer by — and more importantly, spending all your time at a resort misses so much of what makes Turks and Caicos special.

On your next trip, do yourself a service: take the time to leave those comfy confines and you’ll quickly learn Turks and Caicos is full of vibrant culture. Across the island, you’ll find flamingos and artisan vendors roaming steps away from centuries-old ruins. You’ll see surf pounding limestone cliffs along scenic trails, and heavenly beaches hidden behind colorful shacks. The Turks and Caicos are a lot more than the just the expensive resorts advertised on travel-booking websites, and it takes surprisingly little effort to discover the island’s fascinating history and culture. 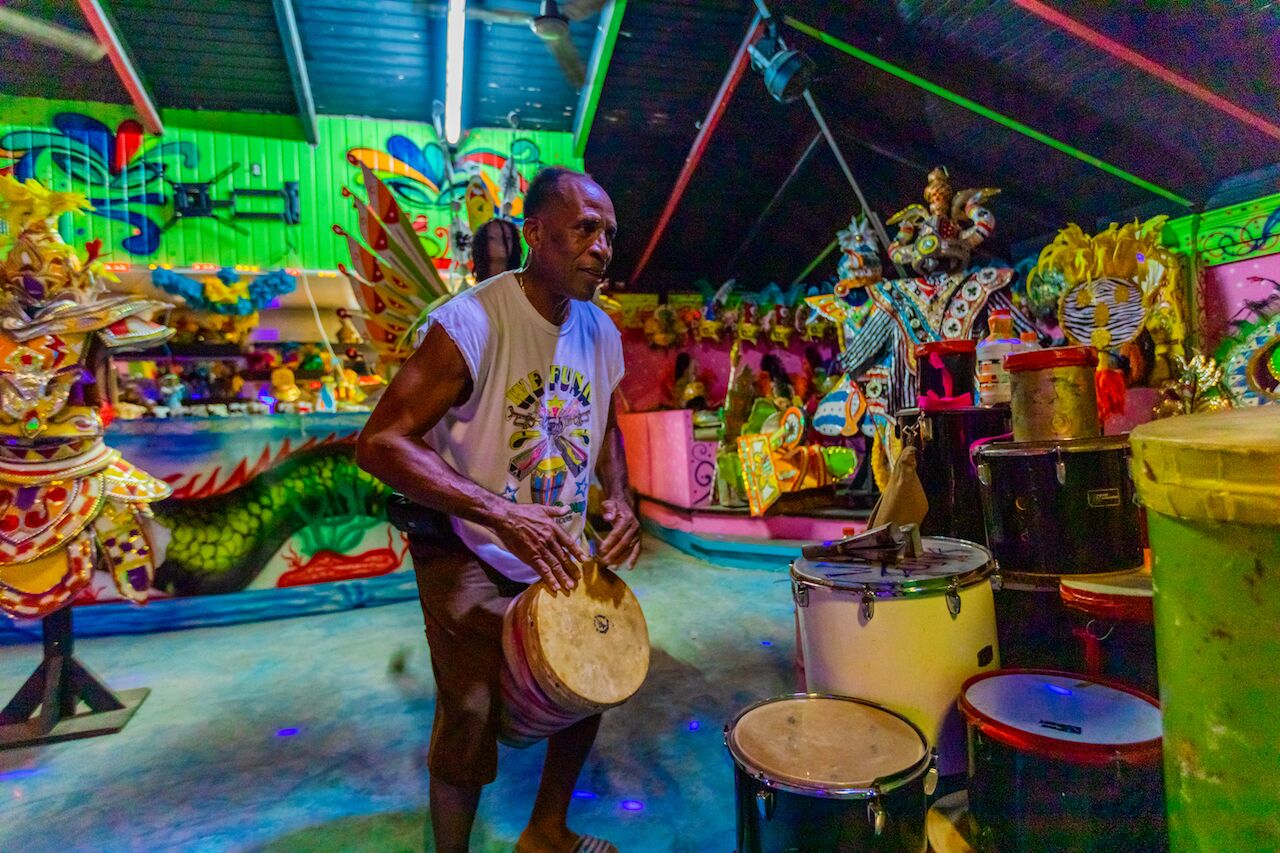 “Slaves,” Penn says, putting down his conch horn and showcasing a junkanoo costume made from strips of ripped fabric that resemble a colorful cloth mop. “They would cut up old clothes to make the costumes. That’s why they call it junk-anew!”

Whether that’s the real origin of the name is debatable, as is the origin of the celebration itself. Penn, along with most historians, agrees that Turks and Caicos’ junkanoo dates back to the islands’ slave era (which ended in 1834), when Christmas and New Years were the only breaks slaves got. Making the most of their brief respite, they celebrated by dressing in elaborate garb and playing music with whatever instruments they could find. The tradition evolved into ever-more-elaborate costumes, better instruments, and parades on Boxing Day (December 26) and New Years Day.

On a tour, Penn shows guests the full-body costumes in his museum. They’re brightly-colored gladiators representing the indigenous melon cactus, conch shells, and flamingos. After the tour, guests return to the lobby for an introduction to ripsaw, a music genre that originated on the islands. It’s akin to a Caribbean percussion jam band made up of goat skin drums, a metal saw, and milk jugs-cum-maracas. The music is a tribute to the improvised instruments of the slave era. 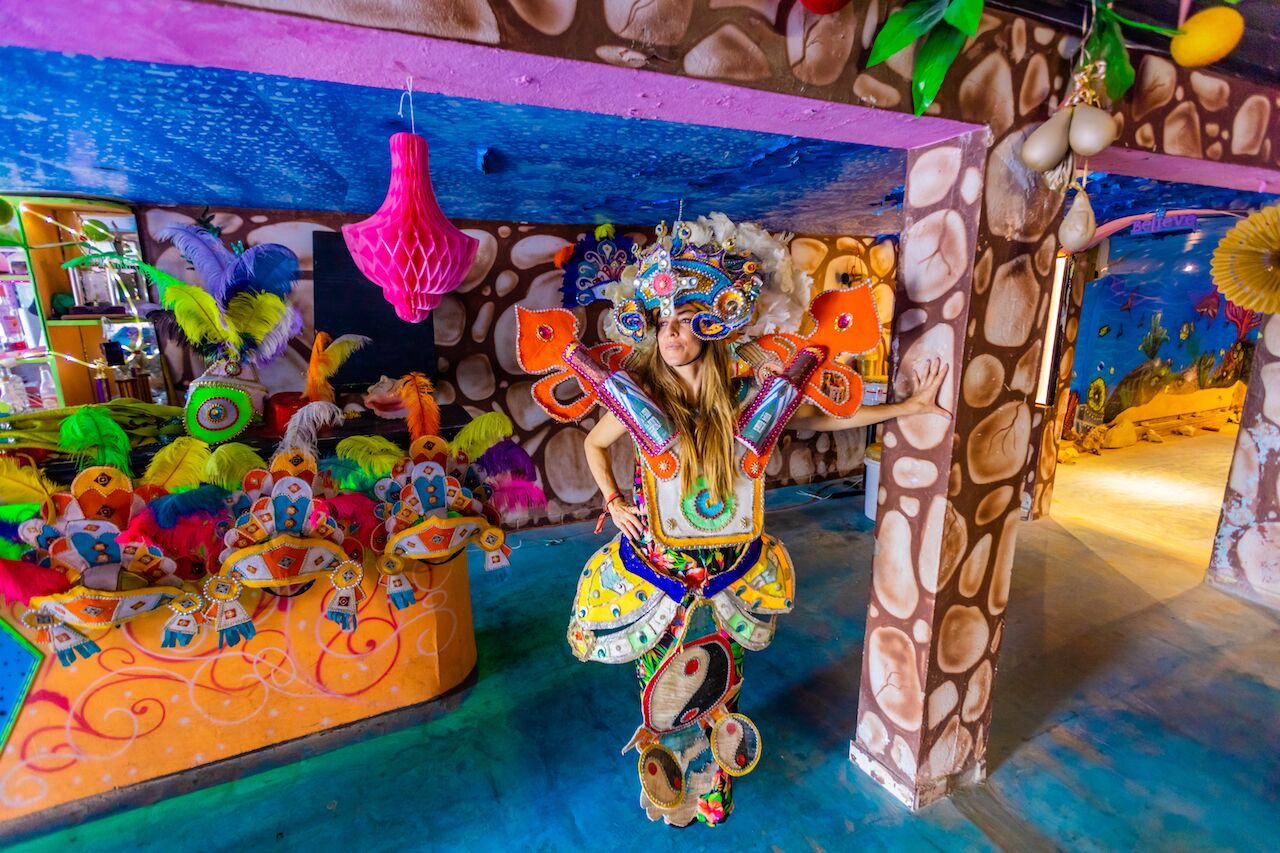 “The new generation,” Penn says during a break, “they mix the ripsaw with other music, from Jamaica and other places. So you won’t see the old kind that much anymore.”

It’s not just a case of “kids these days,” either: Penn is aging, and no obvious successor has stepped up to lead his We Funk Junkanoo Band. There’s no way to say if the tradition will eventually die with him, but it is — at best — in peril. Visiting the museum is one of the most culturally enlightening things to do in Turks and Caicos, but it may not be an option forever. 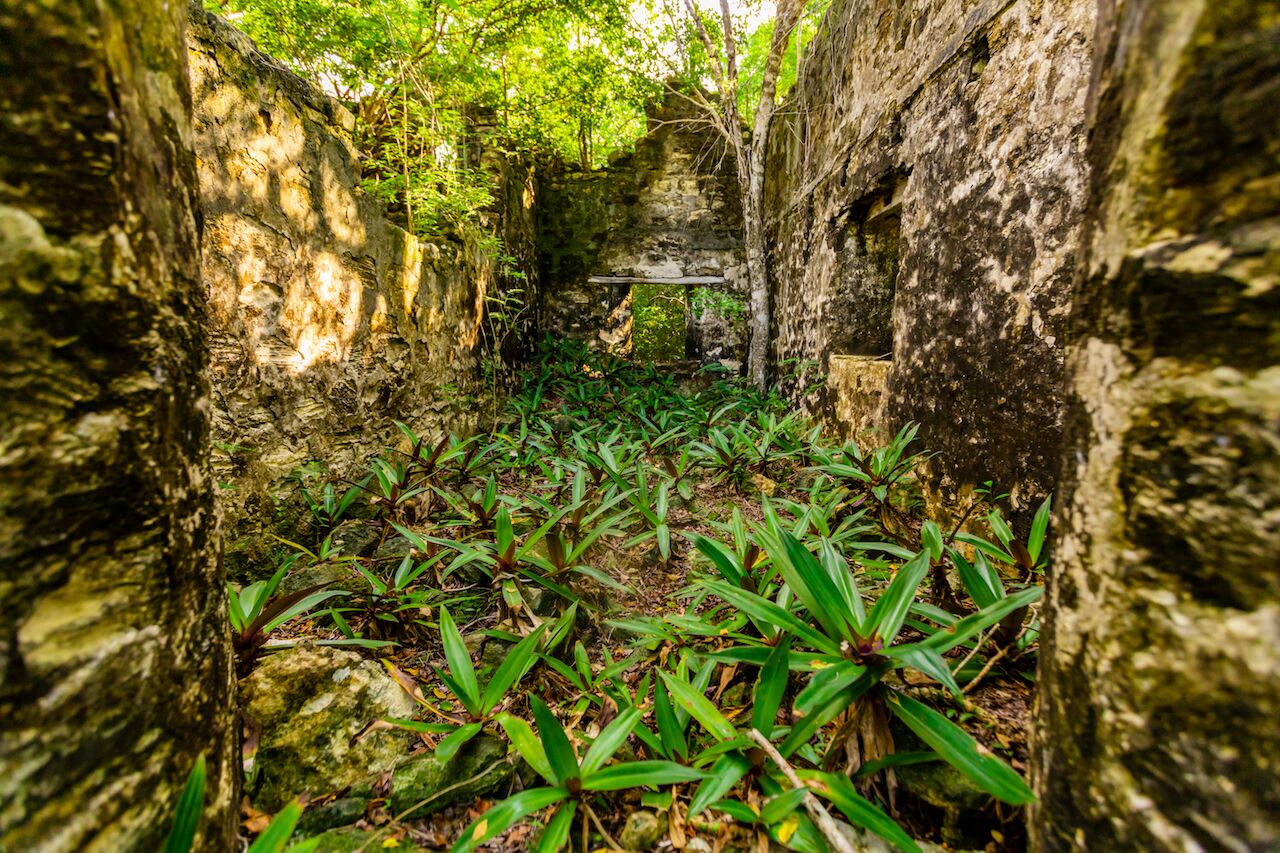 Much like you may expect from any damp location that hasn’t yet been paved over, the mosquitoes in North and Middle Caicos are no joke. And though you’ll reach the islands from a short ferry ride from Provo, locals joke that the mosquitoes could probably carry you faster. But as long as you arm yourself with a can of bug spray, you’ll have an amazing time exploring these large, sparse islands that hold Turks and Caicos’ most scenic spots.

North Caicos is home to the Wade’s Green Plantation, an 18th-century plantation to which many Turk islanders — mostly descendants of slaves — can trace their family lineage. The massive, 3,000-acre space grew cotton, sugarcane, and agave-like sisal plants. At one time, it housed over 384 slaves and was the largest of the islands’ “loyalist” plantations: those granted to British sympathizers when their land was seized after the Revolutionary War.

Today, touring the ruins is one of the best things to do on Turks and Caicos for history lovers or nature-lovers; it’s beautiful and overgrown with tropical foliage. The juxtaposition of the grey stone and sprawling flora is eerily beautiful and a fantastic lesson in both the island’s history and vegetation.

You’ll reach Middle Caicos if you head south along the outer islands’ lone road, where you’ll see signs pointing to a little spit of sand called Bambara Beach. Here, a grove of casuarina pine trees stand over a row of pastel-colored shacks. Both of them front a blinding white beach with the islands’ trademark turquoise waters.

The shacks sell everything from local crafts to conch fritters. Outside shack three is the usual spot for locals to stand around drinking beer, like a still from a Caribbean “King of the Hill.” 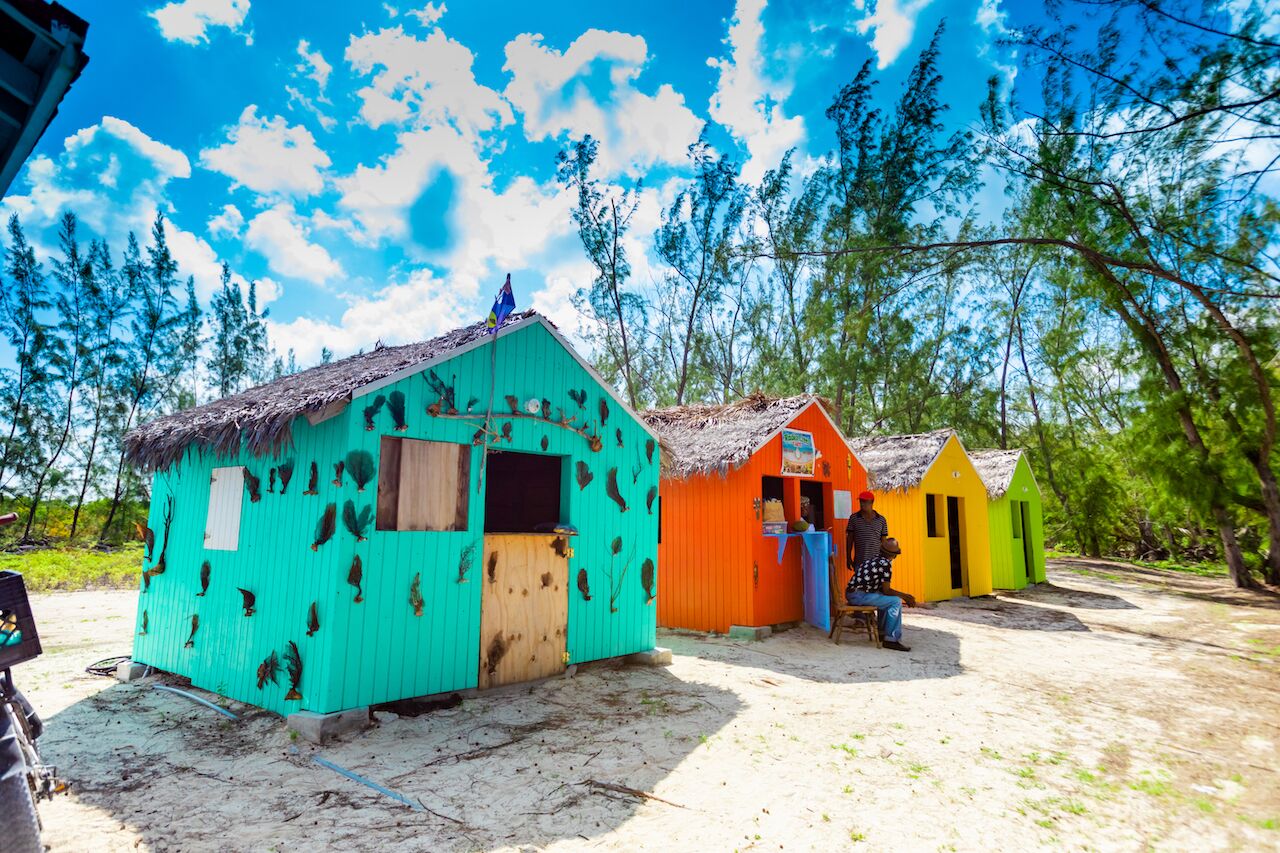 Time seems unimportant here and the soft breezes and green waters will likely hypnotize you into forgetting how long you’ve stopped. Bambara is the epitome of a Turks and Caicos paradise, but it’s unusual to see more than one or two tourists. Of course, it’s a bit of an ordeal to reach as you’ll need to rent a car at the ferry terminal or hire a driver. But worth it for this kind of idyllic isolation.

Middle Caicos also boasts the most scenic hike in the islands: the Crossing Places Trail. While the islands are generally fairly flat, you’ll find a little slice of the British Isles beginning near the Dragon Cay Resort. 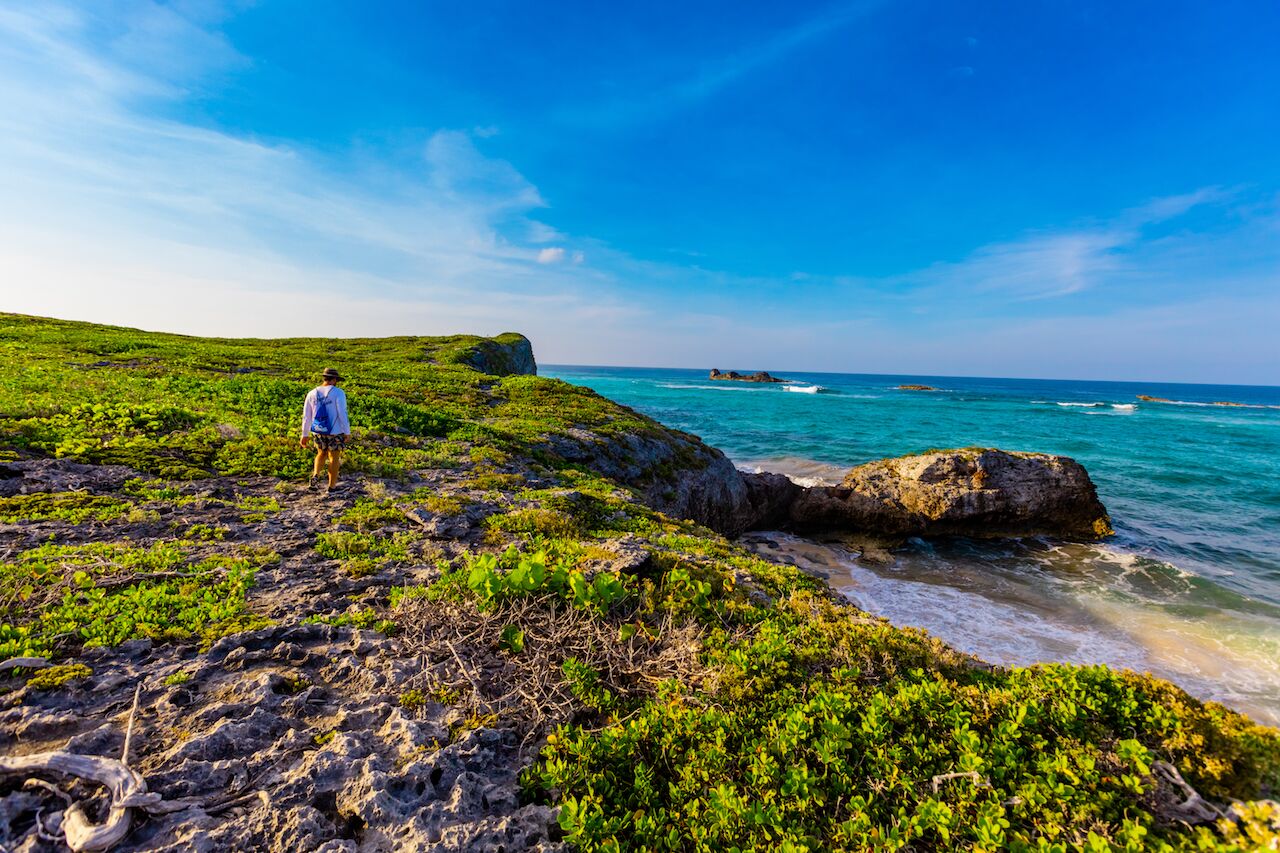 The jagged coastline that runs from the resort at Mudjin Bay over the northern shore of Middle Caicos is a winding journey of limestone cliffs, crashing waves, and secluded beaches. Hiking the 4.6-mile, out-and-back trail is one of the best things to do on Turks and Caicos for adventurers who want to hear a constant soundtrack of fierce waves belting the shore and have endless views of the waves rolling in — the trail is near a pretty decent surf break.

Learn about history beyond the cruise port in Grand Turk

Turks and Caicos’ other frequent stop is Grand Turk, but that “stop” is often little more than a cruise ship port of call filled with fruity drinks and duty-free jewelry. But Grand Turk is home to almost all that is historic about the Turks and Caicos. It was the islands’ first major commercial settlement and one of the world’s leading salt producers for 300 years. 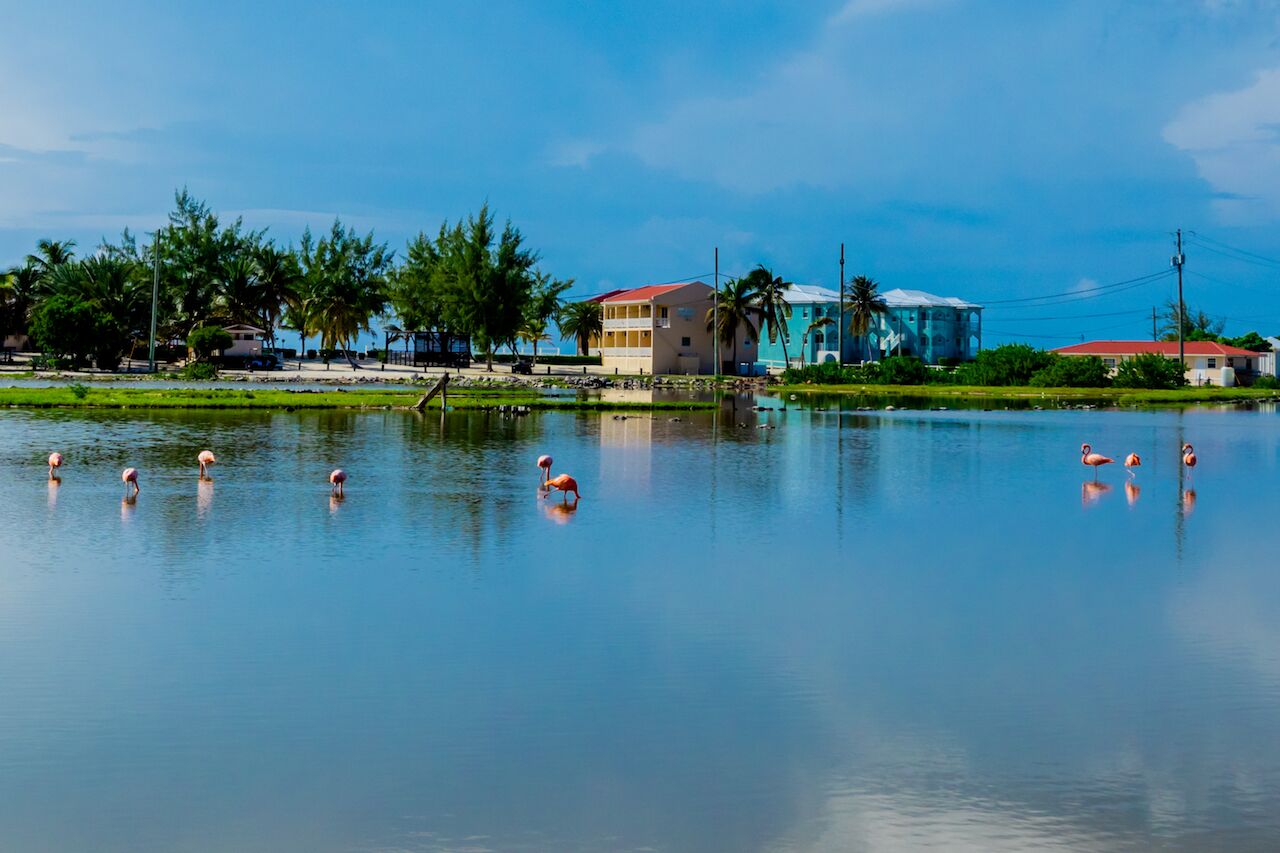 Though the salt industry has been dormant since the 1960s, salt ponds still cover the center of the island and are home to flamingos and other migratory birds. It’s the kind of urban wildlife refuge you typically see in places like the Galapagos, and visiting is one of the best things to do in Turks and Caicos near the port. It’s a peaceful meditative spot barely a mile from where the ships dock.

However, if you really want to dive into the economic history of salt, book a ride alongside tour guide Robert Hall. Once a local politician, Hall now tours visitors around his home island with an unparalleled depth of knowledge and a voice that, if you close your eyes, sounds exactly like Darth Vader (in a soothing way). Most hotels and restaurants should know how to get in touch with him.

“Grand Turk provided much of the salt used by American troops during the revolution,” he says. “George Washington was probably giving his men salt from Grand Turk.”

He takes us along Front Street, a narrow strip of colonial homes dating back hundreds of years. They’re now inns, restaurants and private residences. “When the salt industry was introduced in 1665, horses and donkeys were brought in to pull the carts of salt from the Salinas [salt marshes] to the boats,” Hall says as we drive by Front Street’s concrete walls. After a few years of many of the merchants being sued for damages their animals did to homes, lawns, and doors, the merchants lobbied together to pass a law that said the animals weren’t responsible for damages unless they managed to scale an 8-foot-tall wall. That shifted the onus of responsibility to the home owners, all of whom were forced to build massive walls around their properties. Many of them still stand today.

In the middle of the street, one mansion-turned-home converted its oceanfront garage into the Sandbar Beach Bar, where guests of the Manta House (and anyone else) can cool off with an oceanside beer or snack. It’s also a shared office for Grand Turk’s work-from-paradise set and usually filled with young professionals sweating behind their laptops while intermittently swatting mosquitoes. 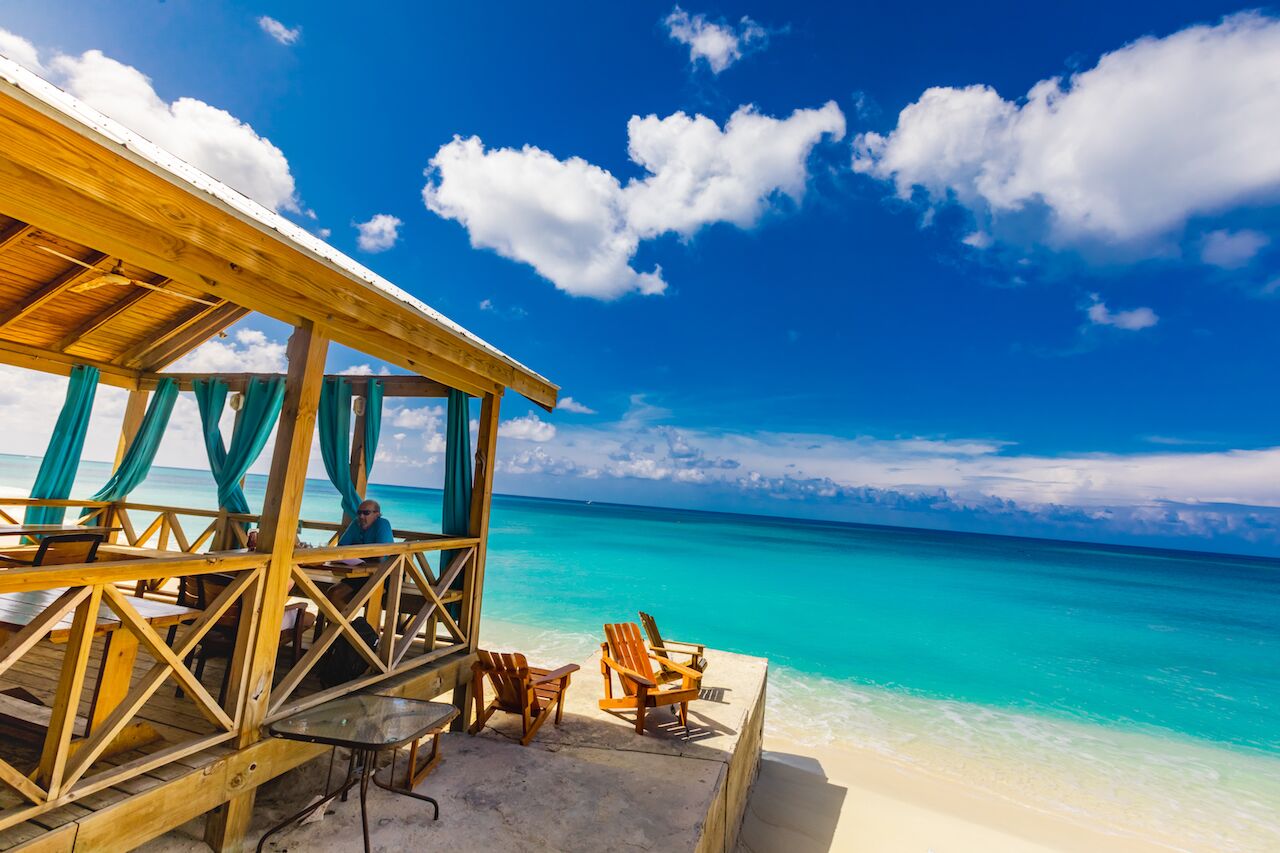 Hall drives up to the beaches along the northern peninsulas of Grand Turk, another slice of Caribbean paradise tourists haven’t discovered. We wind up the hills to an abandoned British navy base turned into an amusement park, though it was again abandoned when cruise ships left during the pandemic. It’s easy to notice the overgrown zip line tower in front of a shuttered souvenir shop and crumbling barracks. The place is a poetic relic to two eras gone by.

Hall makes it his goal to convince travelers that Grand Turk’s meandering history, from salt hub to tourist town, makes it worth far more than a six-hour port of call. It deserves exploring beyond the tourist traps, as do the rest of Turks and Caicos, with their untouched wilderness and colorful culture.

Sure, a relaxing week at a luxurious hotel isn’t necessarily a bad idea, but the islands offer plenty more for visitors who want more than pure relaxation. Visiting these places may take a bit more logistical planning — and a good deal more bug spray — but exploring some of these things to do in Turks and Caicos beyond the beaches is a rewarding experience. You’ll just need to pull your eyes away from that shimmery, turquoise-blue water first.

Insider Guides60+ Beaches To Dream About This Dreary Winter Season
Tagged
Beaches and Islands Turks and Caicos Islands
What did you think of this story?
Meh
Good
Awesome

7 Foods You Have To Try in Turks and Caicos

Turks & Caicos: R&R Has Taken on a Whole New Meaning