Sure, this is a “green” travel guide — and we’ll keep it green — but it’s New Brunswick’s actual colors we’ll talk most about: the warm red tones of the south coast’s rocky sea caves that reveal themselves only at low tide. The fierce blue-grey of the waters in the Bay of Fundy, a feeding ground for a dozen species of whale. The soft golds of the sands on the Acadian Coast, which has the warmest saltwater beaches north of Virginia, and of the cardboard tray of toasty fried clams you got from the beach canteen.

But back to the green: Avoid that carbon-intensive flight, grab a few friends, and carpool six hours north of Boston, just across Maine’s northeastern border. From the Canadian Appalachians to the Acadian Coast, here’s your eco-friendly guide to experiencing the best of New Brunswick. 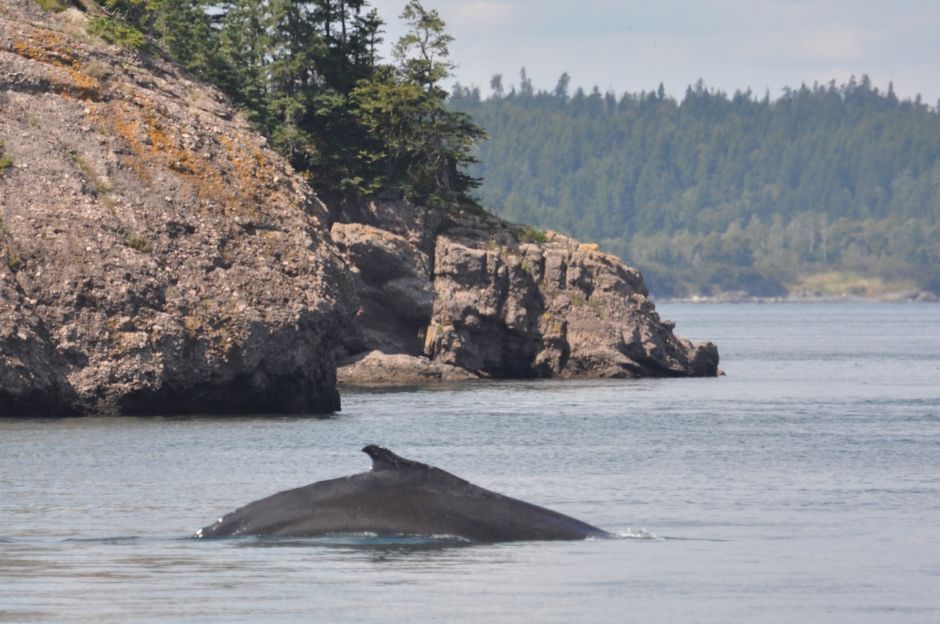 There are many reasons to visit Saint Andrews, not least of which is this picturesque seaside tourist town’s location just 30 minutes from the US border at Calais, Maine. Once you’re here, activity #1 should be a whale-watching tour, where you’re virtually guaranteed to have an up-close whale experience from June to October.

To get on the water, connect with Island Quest Marine for a tour. Your boat captain, familiar with the animals’ markings, will greet humpback and minke whales like they’re old friends. Captain Chris is the only local captain who grew up in and around these waters, so you’re in good hands. Island Quest Marine also offers an incredible shark-tagging experience, guided by a team of biologists.

While you’re in the area, check out the Huntsman Marine Science Centre, a research and education facility (and aquarium!) whose mission is to inspire stewardship through community engagement. Get hands-on, grab your boots, and go on the “Beach Crab Grab” — a two-hour coastline hunt to collect and study the invasive European green crab.

Hiking along the Bay of Fundy 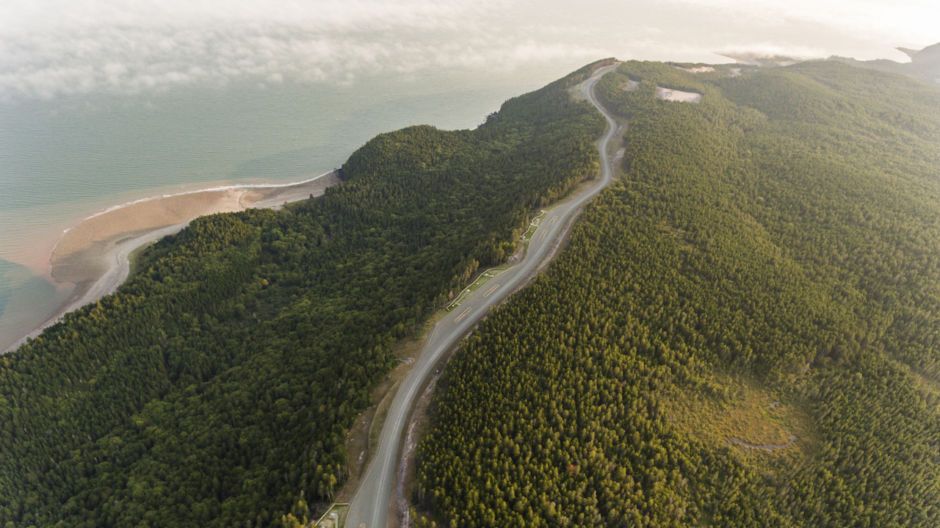 Overlooking the entire bay, the Fundy Trail Parkway is a gigantic seasonal wilderness park that incorporates trails, beaches, and a twisty, 19-mile seasonal drive along the wild Bay of Fundy coast. Branching off the main drive are 16 hiking paths of varying difficulty that encompass 20+ observation decks and lookouts (some of which are wheelchair accessible), a 200-foot-long suspension bridge, and a “flowerpot” rock similar to those at Hopewell (see experience #4 below).

Choose a micro-hike like the one that leads to the fascinating “Sea Captains’ Burial Ground,” or embark on a short-but-steep trek through lush forest to McLeod Brook Falls. For a serious challenge, tackle the 25-mile Fundy Footpath, recently listed as one of the “50 Best Hikes in the World” by Explore Magazine.

Fundy National Park, less than an hour farther up the coast, has over 75 miles of well-marked trails through the Acadian forest, leading to beaches, beaver ponds, salmon pools, and waterfalls. Overnight options there include campsites, yurts, and cabins. It’s also a Dark-Sky Preserve, where moonglow and a million stars are all that lights up the night sky.

Walking the ocean floor once every 12 hours 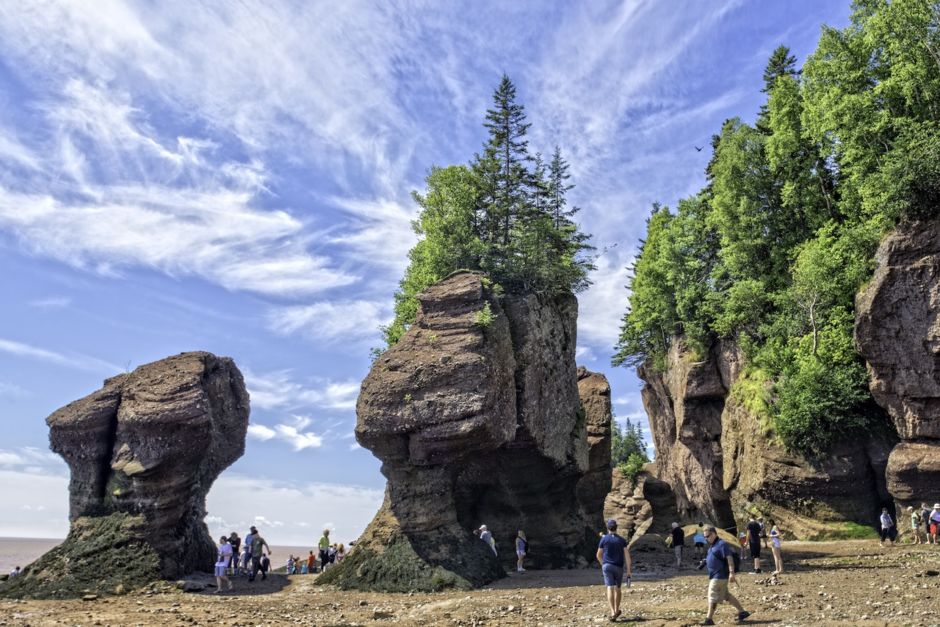 The draw for many travelers to New Brunswick is the Bay of Fundy, a UNESCO biosphere reserve with the highest tides in the world. Twice a day, 160 billion tons of seawater pour in and out of the crevice-shaped bay, a unique geological feature created by a fault valley some 300-400 million years ago. At high tide, the water rises to about 45 feet — just below the height of a five-story building (even higher on a full moon!) — while at low tide, the water completely subsides, exposing a surprisingly firm, walkable ocean floor.

The perfect place to experience both extremes is The Hopewell Rocks, only 40 minutes from downtown Moncton. Here, several giant sandstone “flowerpot” rocks about 40-50 feet tall are surrounded by water for half the day and exposed for the other half, providing a variety of exciting kayaking and hiking opportunities on the exact same turf.

Back along the coast closer to Saint John, in the photogenic village of St. Martins, Red Rock Adventure runs more guided excursions, like their sea caves kayaking tour and Bay of Fundy culinary tours. Don’t miss the Maritime Lobster Boil, which takes place right on the beach.

Exploring dunes and islands on the Acadian Coast 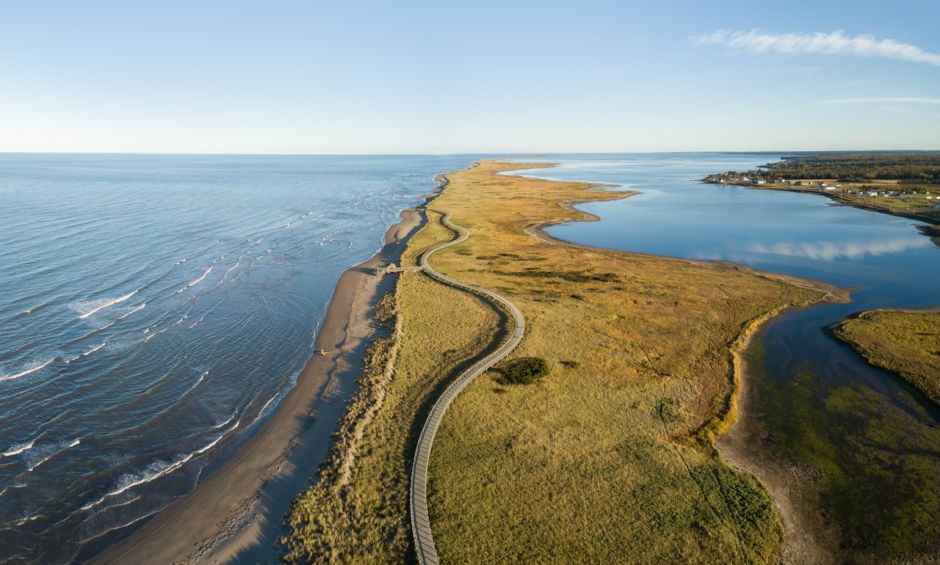 The best beaches in New Brunswick are on the east side — aka the Acadian Coast — with Parlee Beach and Aboiteau Beach standing out as favorites. They’re not just for beach-bumming, either — as with many coastal sites around New Brunswick, local tourism incorporates environmental initiatives to help preserve the landscape. They’re both blue-flag certified beaches that meet stringent, sustainable standards.

A little farther north, La Dune de Bouctouche is a seven-mile-long sand dune featuring a half-mile boardwalk and is one of the last remaining dunes on the continent’s northeastern coastline. Onsite is an eco-center that offers free educational programs and tours, as well as access to a beautiful stretch of sandy beach. Birdwatchers take note: The dune is a nesting ground to a small number of piping plovers who return year after year. Keep your eyes peeled for these highly endangered, delicate, sandy-colored birds.

To feel like you’ve reached the edge of the planet, visit the islands of Lamèque and Miscou, located at the province’s northeastern tip. Lamèque is home to the Ecological Park of the Acadian Peninsula, a protected spot for birds — some 270 species, including the great blue heron — and native flora and fauna. Nearby Miscou is nearly half-covered by a wild peat bog, and in the fall, the moss and shrubs that grow over the bog blaze crimson, creating an impressive backdrop for vacation snaps. The Society of American Travel Writers has described it as “one of the single most beautiful spots in the world.” They couldn’t be more right.

Cycling in the Appalachians 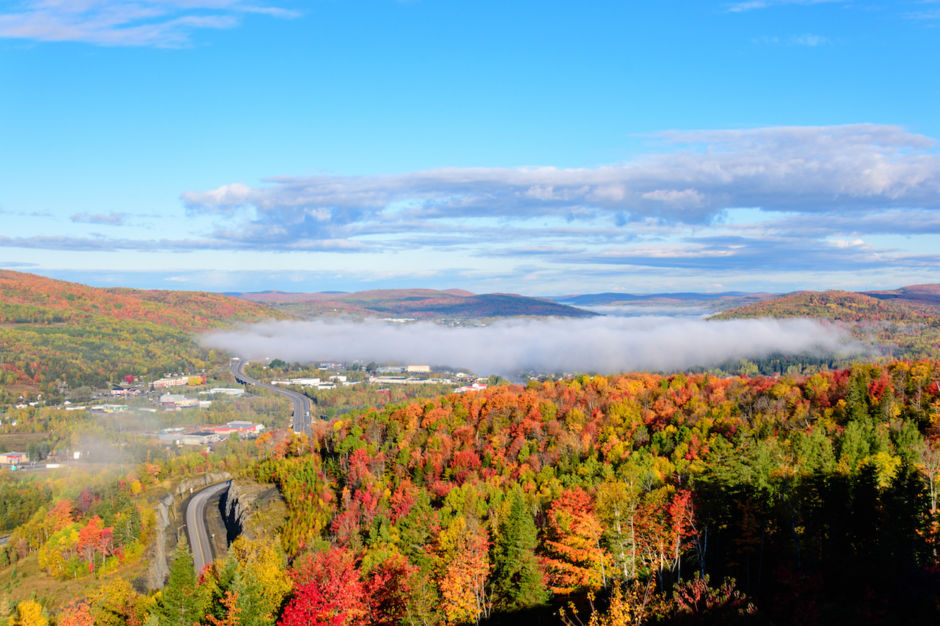 The city of Edmundston in northwestern New Brunswick — right on the Maine border — has a secret identity: the Republic of Madawaska. The moniker was first thrown around in the 1800s when the border between British North America and the United States was yo-yoing, and it’s somehow stuck. In 1949, Edmundston created a coat of arms, a flag, and an “Order of the Knights of the Republic,” of which the mayor is always president.

None of this “republic” stuff is legit, of course, but it offers insight into the creative and adventurous spirit that recently led the city to establish the Sentiers Madawaska Trails, 34 miles of single-track set over 400 acres of forest, with stunning views of the valley below. The trails, adhering to International Mountain Biking Association standards, are definitely geared toward more confident mountain bikers. Bonus: You’ll find the trailhead just two minutes from downtown.

For a more relaxing ride, head to the Edmundston Visitor Information Centre and rent a comfortable bicycle for a journey along the Petit-Témis, an 81-mile gravel-packed bike path that runs alongside the Madawaska River all the way into the province of Québec. Feel free to park your car at the visitor center overnight — the staff will keep an eye on it. They know you’ve got places to explore.