While plants and vines have always grown on walls of their own accord, vertical gardens as we see them today didn’t really hit the scene until the early 1990s. Since then, they’ve been improving air quality and adding some natural beauty to cities and urban landscapes around the world. Here, we take a look at seven of the most amazing green walls around the world. 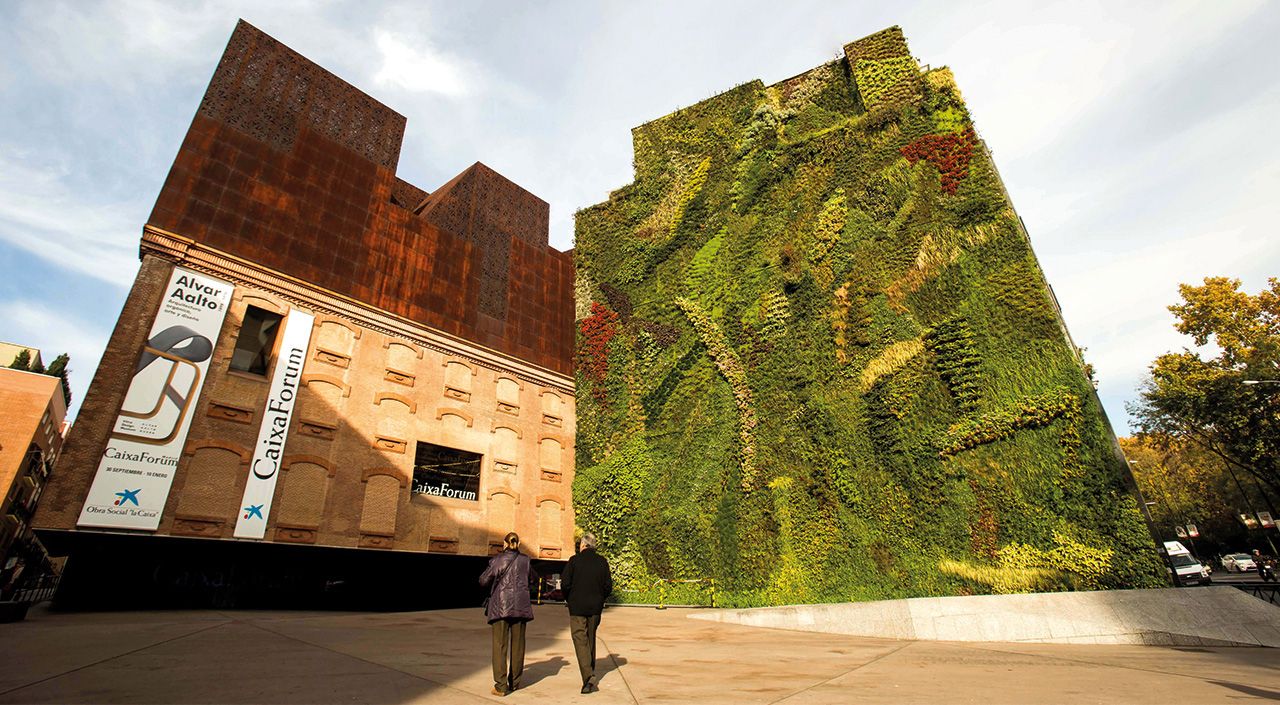 CaixaForum Museum is a modern art gallery located in Madrid, Spain. The massive outdoor vertical garden was designed and created by French artist and botanist Patrick Blanc and was the first of its kind in Spain. The vertical garden is 4951 square feet and has over 15,000 plants of 250 different species, which survive Madrid’s hot summers and cold winters alike thanks to hydroponics (a method of growing plants without soil). The hydroponic setup of this wall is complex, with an automated network of pipes arranged behind the wall to irrigate the plants and ensure they are adequately watered at all times. A range of plants from mosses to begonias is featured on the wall, adding vivid color to the city streets. 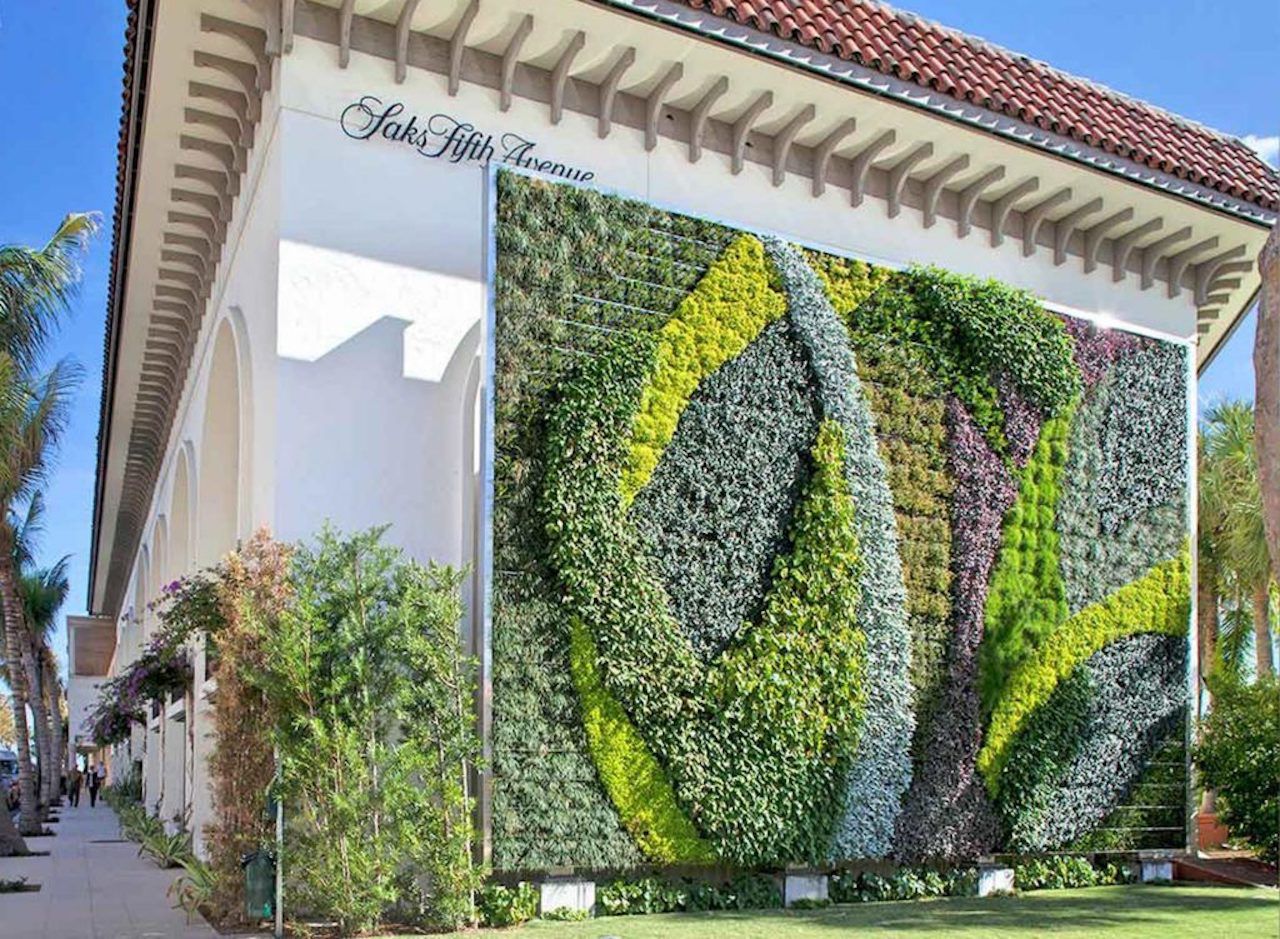 To set off the 150 block at the eastern end of ritzy Worth Avenue in Palm Beach, a lush tapestry of plants adorns the west wall of Saks Fifth Avenue. Palm Beach, an island town that makes up one of the wealthiest zip codes in America, is all things extravagant, and the living wall is no exception: The project received a dedicated budget of $250,000 as part of a larger $15.8 million renovation of Worth Avenue’s streetscape.

The idea to build a living wall came about when a past president of the Garden Club of Palm Beach saw a Patrick Blanc living wall and wanted to bring the concept to Palm Beach. The town contracted a firm called GSky to design and install the wall on Worth Avenue (plant designer was SMI Landscape Architecture, LLC). Sophisticated and understated in varying shades of green, the Worth Avenue living wall features 10,920 plants, some of which are native to Florida. 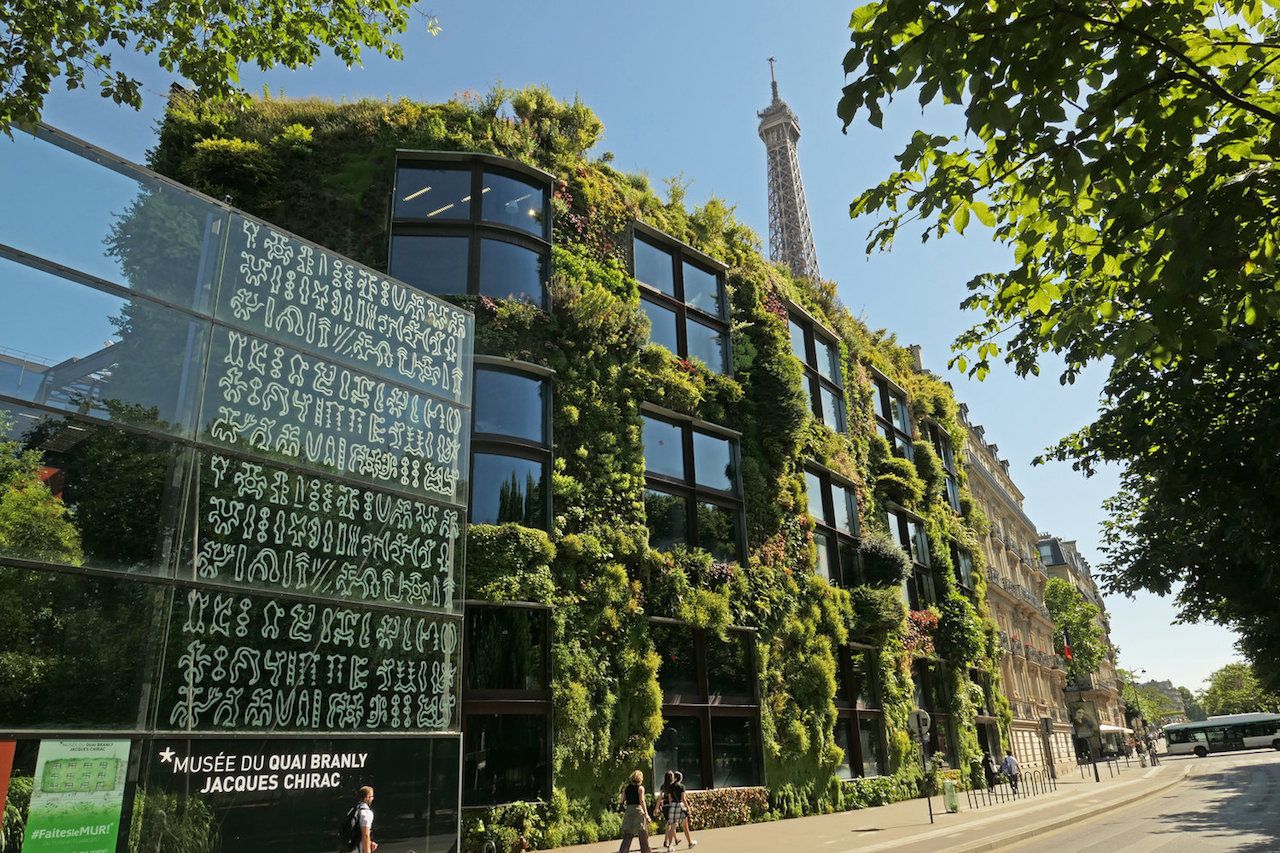 The external living wall of the Musée du Quai Branly in Paris has become iconic since its introduction in 2004, and understandably so: Its striking green color covers an entire facade of the building and stands in stark contrast in the Parisian urban landscape. It was originally created by Patrick Blanc but had to undergo a restoration in 2017 and 2018. 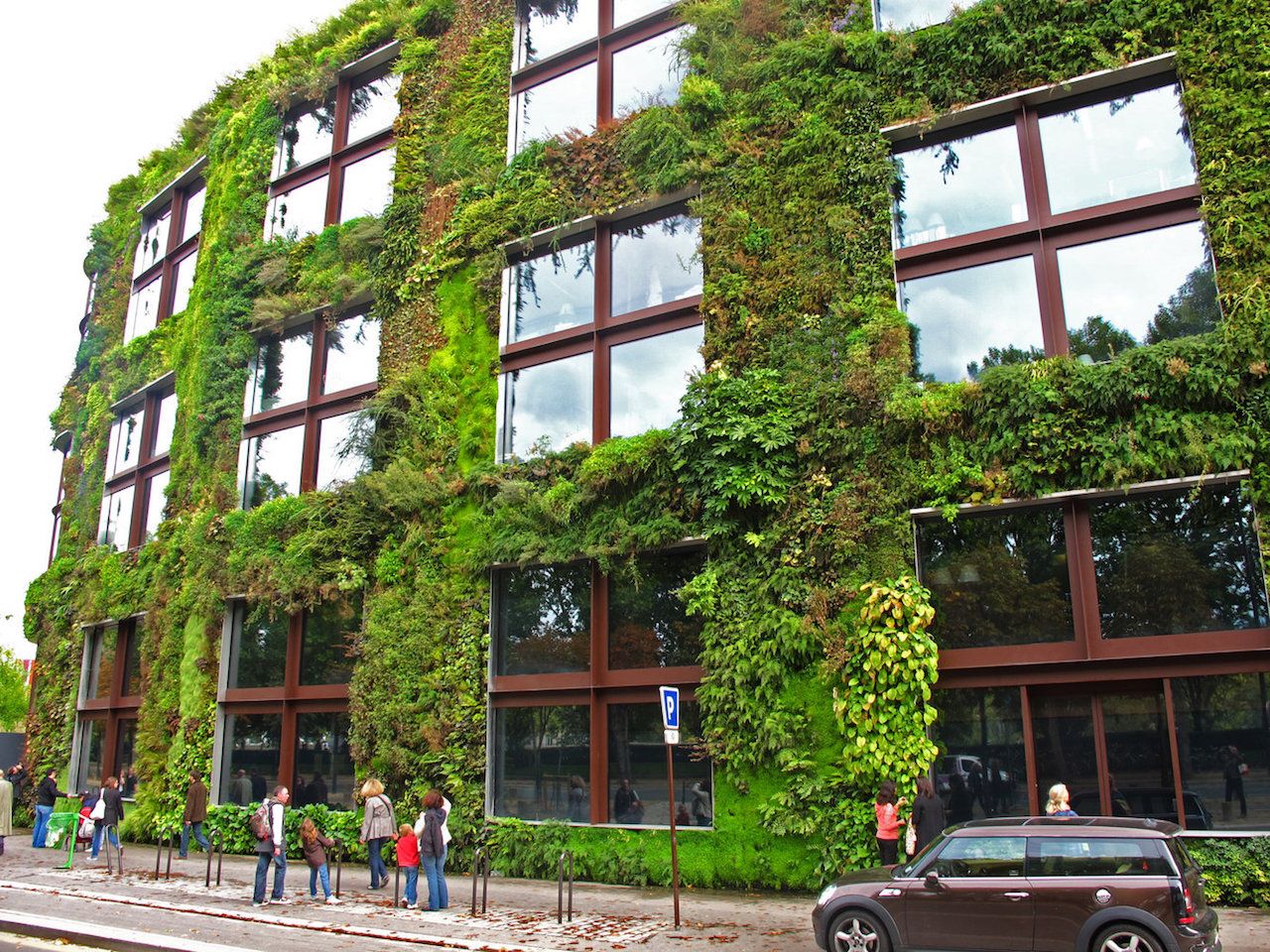 Today, the gigantic green space hosts 376 varieties of 15,000 plants that come from all over the world to mirror the origins of the pieces being displayed inside the museum. The design isn’t just beautiful — it also serves to strengthen the thermal and acoustic insulation of the building. Some of the offices within the museum also feature green walls. Blanc has another vegetation masterpiece in Paris: L’Oasis d’Aboukir, which appears mossy and overgrown, enlivening the city around it. Another notable green wall in Paris is located on the luxury store La Grande Epicerie. 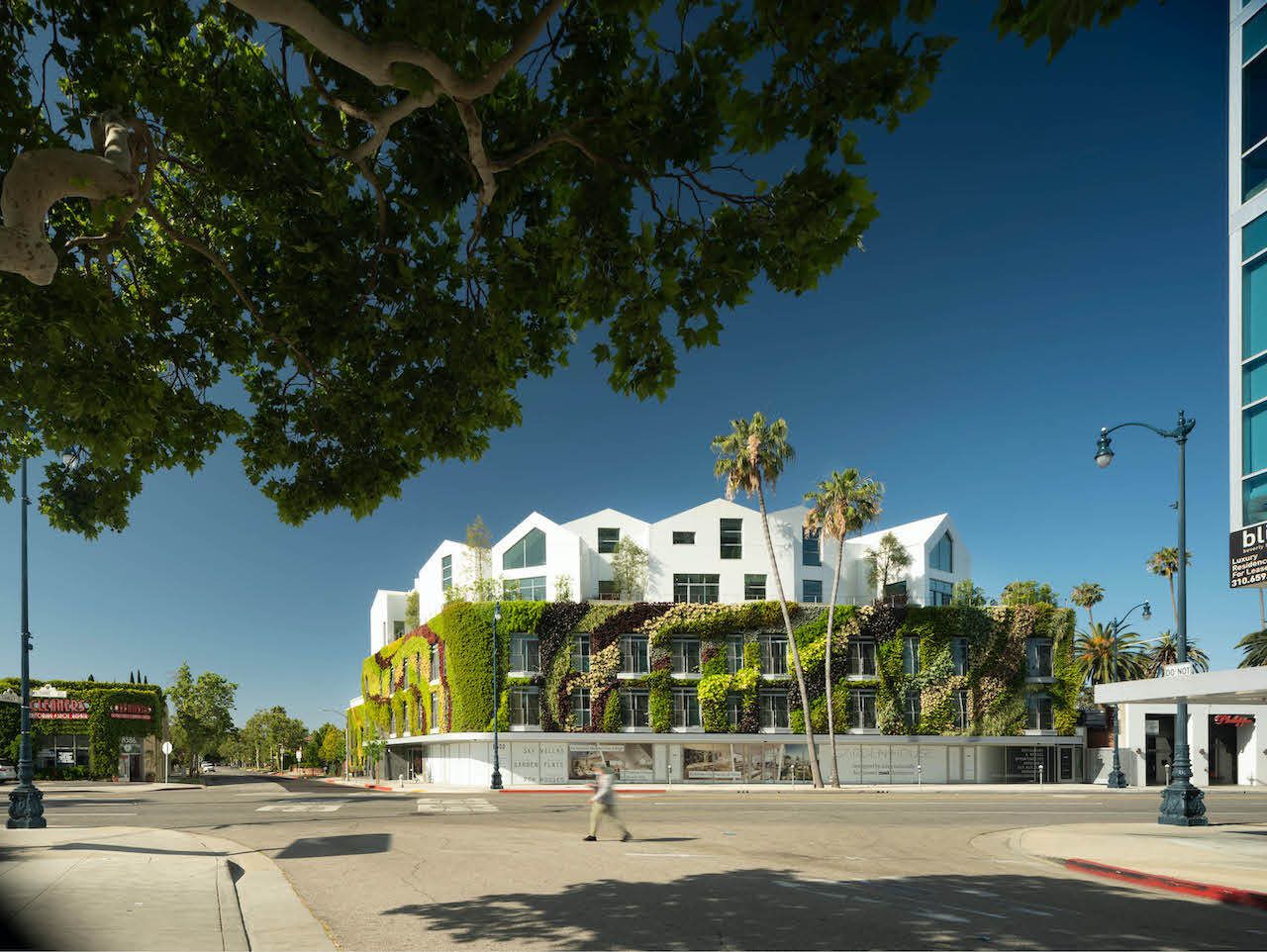 One of the largest living walls in all of the United States, the facade of Gardenhouse in Beverly Hills has been designed to look, from afar, like a verdant hill supporting a small village. Gardenhouse, designed by architecture firm MAD and completed in August 2020, is comprised of ground-floor commercial units topped by 18 private residences that seem to sprout from the living wall. The project wants to reflect the lushness of Beverly Hills with its native and drought-tolerant succulents and vines that need little irrigation and maintenance. But Gardenhouse also gets its name from the other garden within the complex, an oasis of greenery in a central courtyard where residents can gather, away from the prying eyes of passersby. 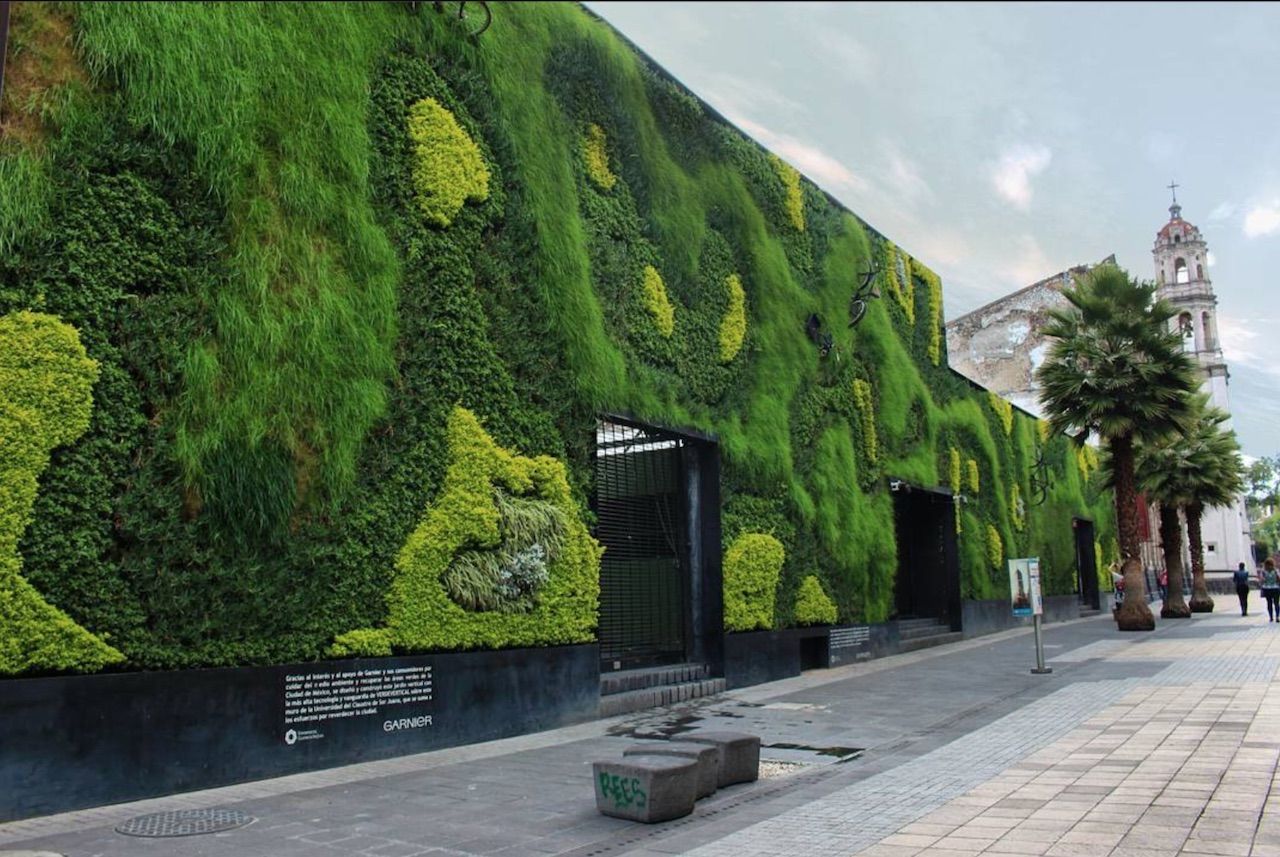 Located at Universidad del Claustro de Sor Juana, one of Mexico City’s largest universities, this green wall is a prominent work of art in the historic center of the city. Look closely at its whimsical design and you’ll also notice a bicycle and a child’s tricycle attached to the side of the wall, in defiance of gravity. Green walls like this one can double as filters for noise pollution, as well as natural air purifiers, enhancing the quality of life for all who live nearby. 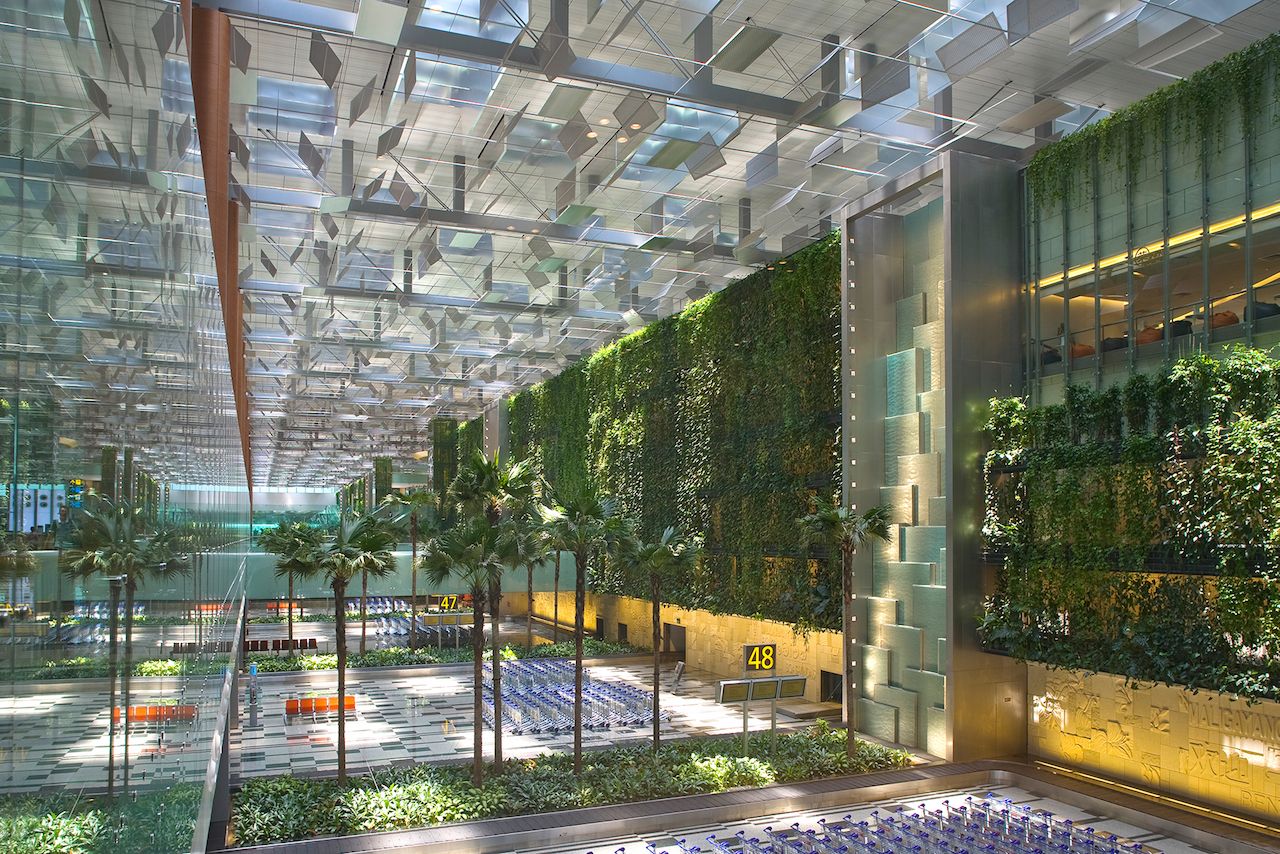 With living walls, topiaries, butterfly gardens, a dragonfly habitat, a cactus garden, and even a large park, there are many natural attractions to enjoy at Singapore’s Changi Airport. However, the living wall in Terminal 3 is a real eye-catcher with over 50 species of 100,000 plants breathing life into the bustling transit hub. The vertical garden spans the length of three football fields. The garden stays alive thanks to an advanced watering system that delivers exactly how much water and fertilizer each plant needs. 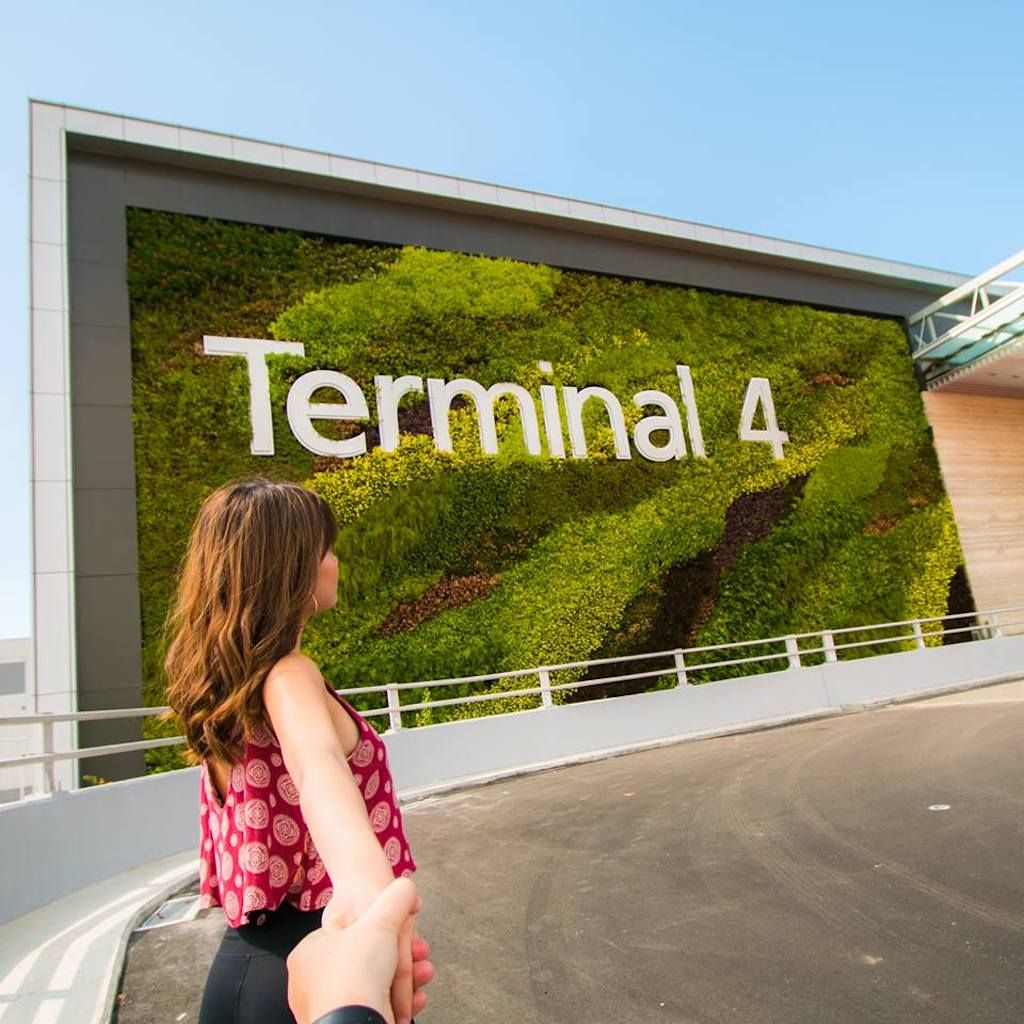 There’s another living wall outside and inside Terminal 4, so make sure to leave extra time for impromptu forest bathing when traveling through Changi Airport. 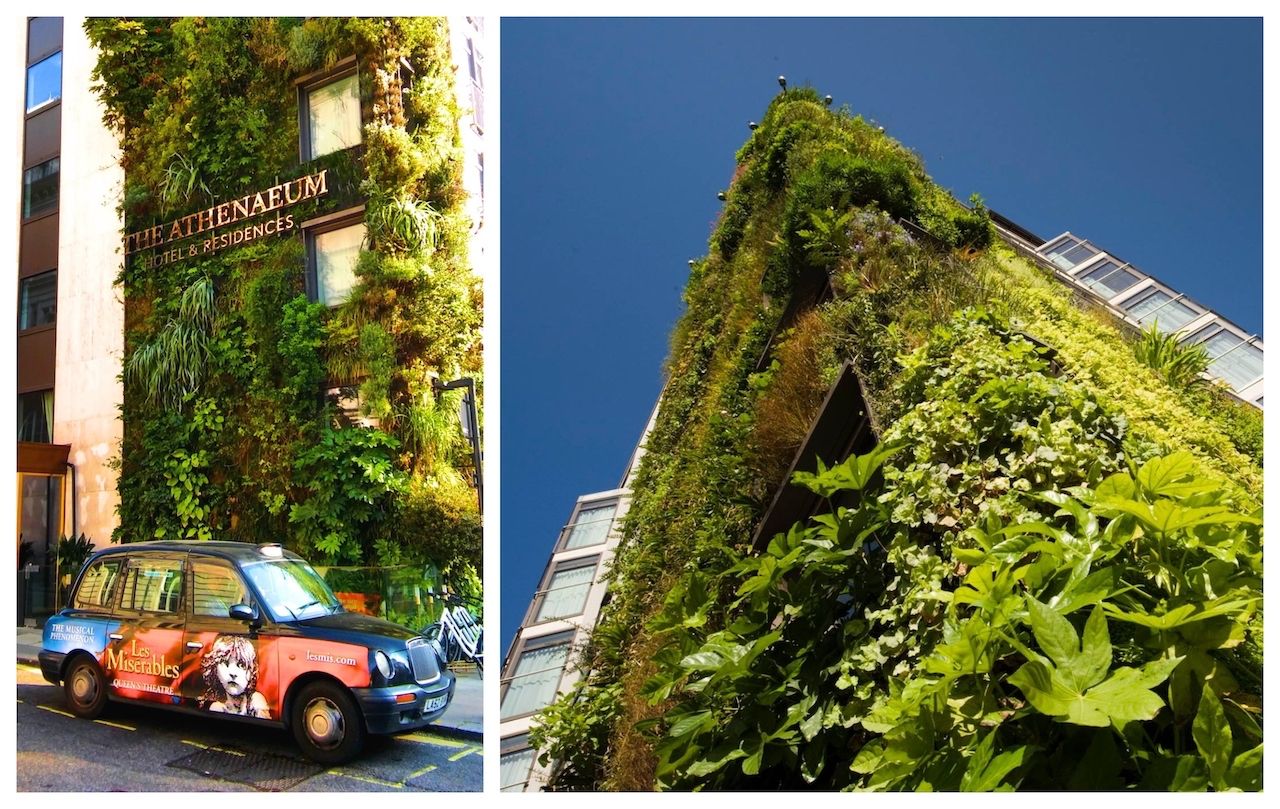 Photo: The Athenaeum Hotel and Residences/Facebook

A swanky hotel located across from Royal Green Park in Mayfair, The Athenaeum doesn’t just offer five-star appointments inside its luxurious walls: A sprawling green facade covering 10 floors of the hotel’s exterior attracts the attention of any passer-by. The living garden, created by Patrick Blanc in 2009, is a mix of both native and exotic plant species and contributes to a more biodiverse city. Bright green and wild, the living wall at The Athenaeum is a welcome sight in the London urban landscape. 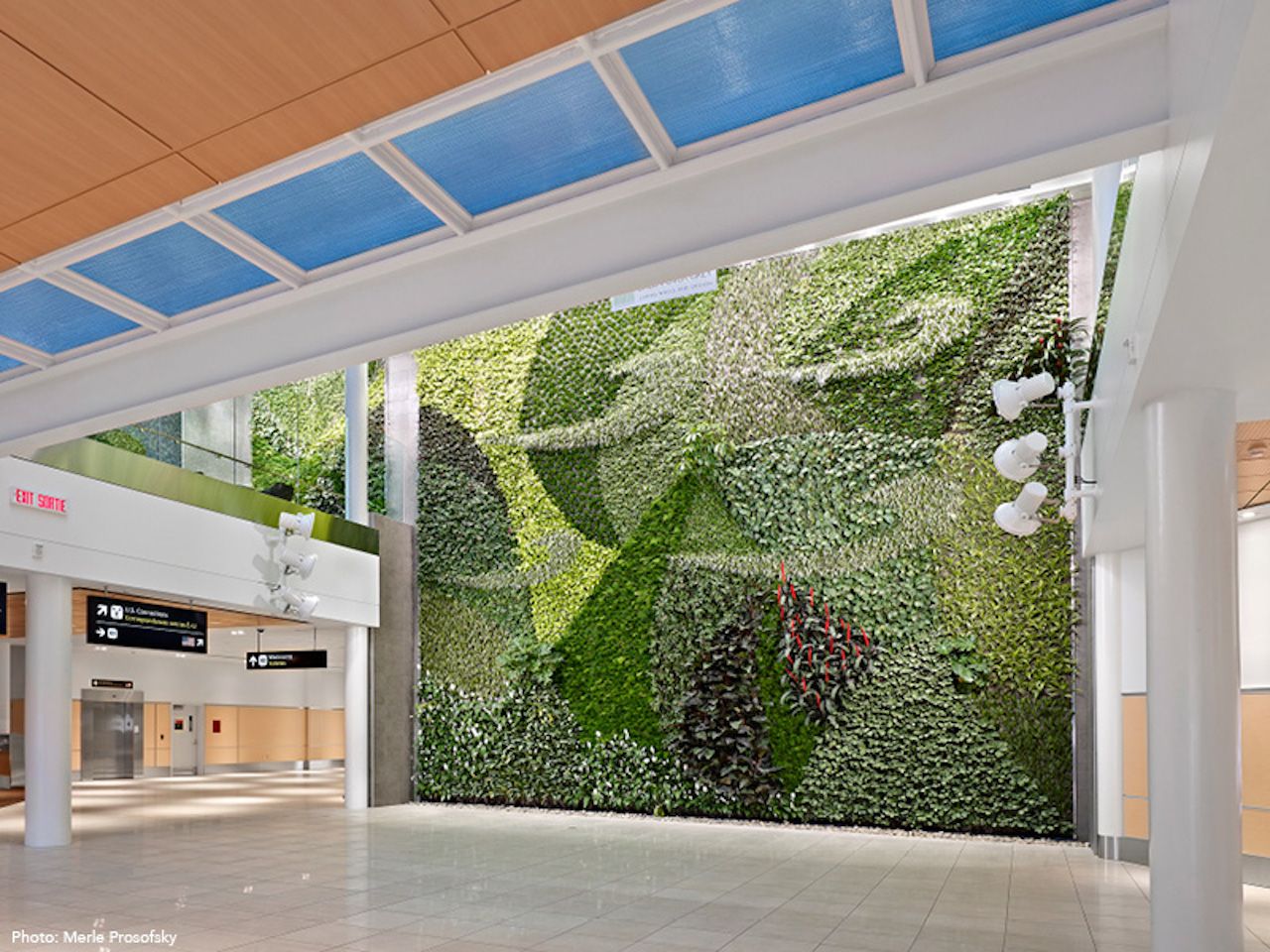 Created and installed in 2012, the 1,420-square-foot living wall at Canada’s Edmonton International Airport was dreamed up by Mike Weinmaster, Chief Designer at Green over Grey — Living Walls & Design, who drew inspiration from high-altitude cirrus cloud formations and air currents for this piece. It was erected as a symbol of the airport’s commitment to sustainable design.

Located in the Canada Arrivals Hall so that both arriving and departing travelers can enjoy it, the wall incorporates 32 plant varieties from Papua New Guinea, Brazil, Central America, and Indonesia. To keep the wall alive, water percolates down through a fiber mat made of recycled materials, and the wall is trimmed and maintained once a month via mechanical scissor lift. 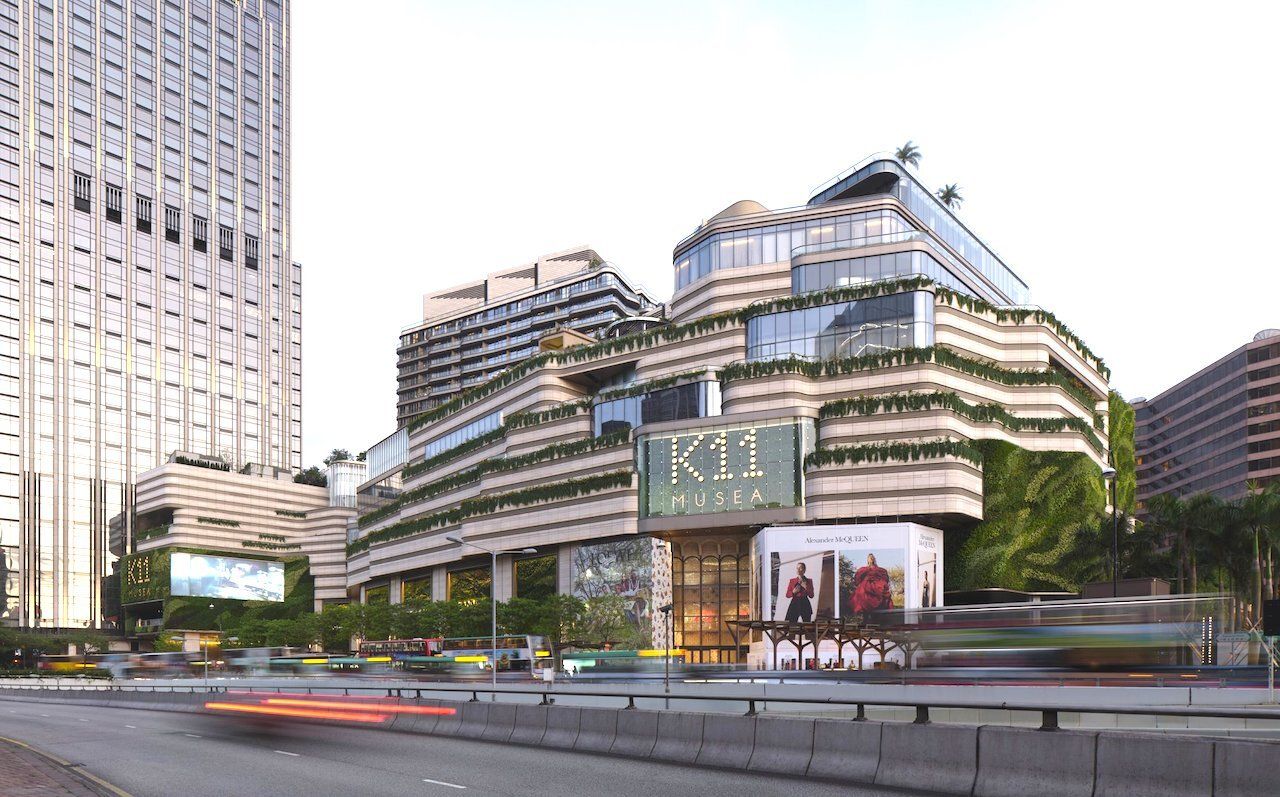 K11 Musea is a 10-story multi-use complex, home to luxury and artsy boutiques, cultural offerings, restaurants, and more within its modern walls on Hong Kong’s Victoria Harbor. To add a touch of greenery to the urban waterfront of the city, K11 Musea was clad in 49,514 square feet of vegetation, forming an immense organic art piece. The balconies of the building that opened in August 2019 also house hanging plants, adding to the lushness of the facade, and on the roof, the Nature Discovery Park hosts a small farm for K11’s many restaurants, as well as a garden and an aquarium.

A version of this article was previously published on April 5, 2019, and was updated on November 30, 2020, with more information.

National ParksThe 7 Most Stunning Wildflower Blooms in the World and When They Peak
Tagged
Art + Architecture Sustainability
What did you think of this story?
Meh
Good
Awesome