With each paddle stroke, my kayak cuts through the black water scattered with ice. I’m able to safely navigate the ice strewn fjord and maintain a safe distance from larger, imposing icebergs shimmering and melting in the midday sun. What I’m seeing above the surface is only a fraction of what sits below.

Off in the distance I can hear new icebergs calving from the glacier that we have yet to see. The only other sound in this icy labyrinth is the occasional rolling of a berg as its weight changes from systematic melting on the exposed surface. The plastic hull of my bright red kayak collides with smaller chunks of ice while others eerily roll under my boat down the length of the hull before emerging near the stern.

However, I’ve got a little ahead of myself. My journey to this remote destination on the world’s largest island began days earlier and involved nearly two trips across the Atlantic Ocean.

Getting there is half the adventure 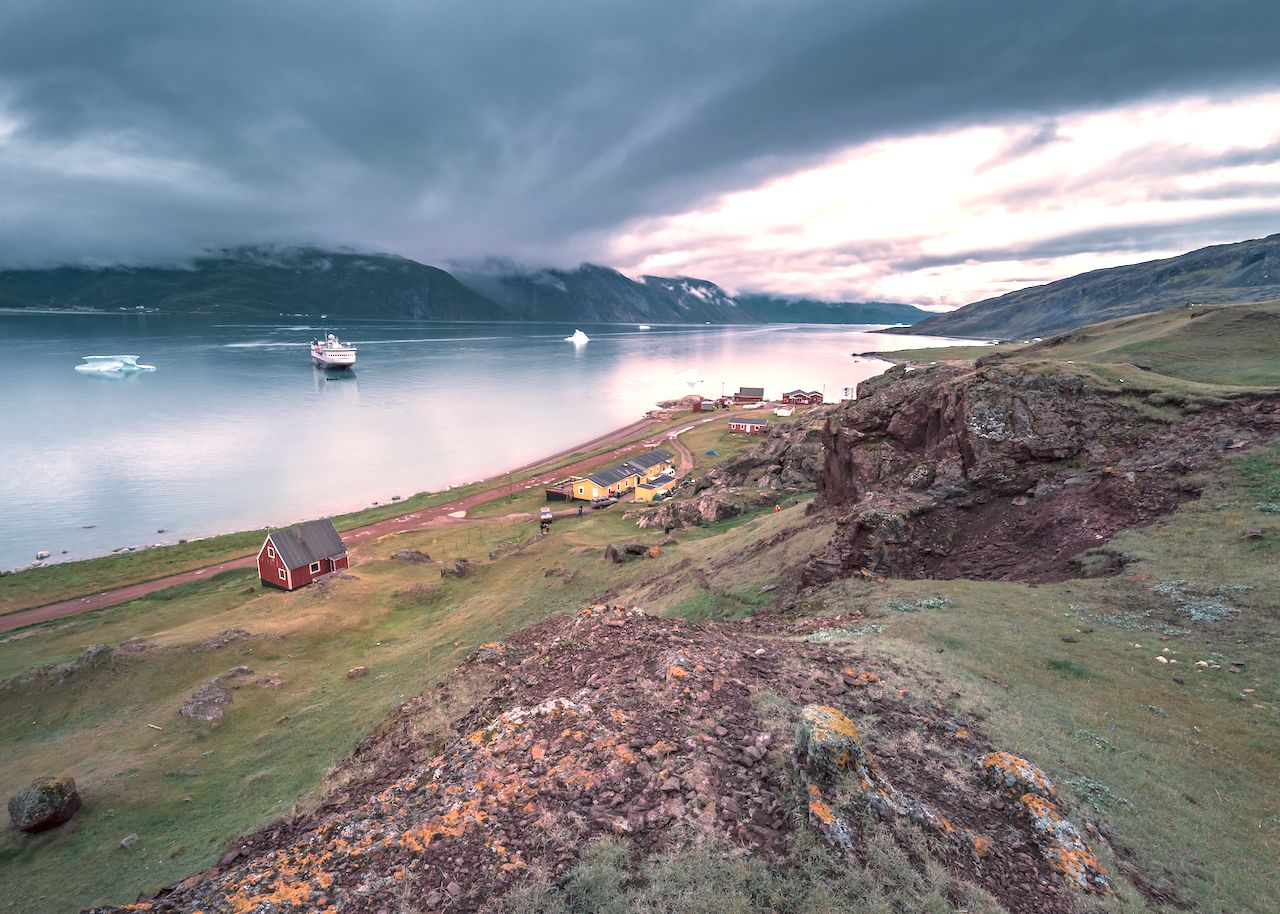 The Narsarsuaq Airport in southern Greenland can only be accessed via Reykjavik, Iceland, or Copenhagen, Denmark. Built as a United States air base in 1941, the airport has the second-longest runway in the entire country, though the settlement has less than 200 residents. I flew east across the Atlantic Ocean to my overnight stop in Copenhagen. The following morning had me ushering myself back to the airport for my trip two-third of the way back on Air Greenland, this time in a northwesterly direction across the Atlantic.

As the plane begins its initial descent, I catch my first glimpse of the massive ice sheet that blankets the vast majority of the ironically named island. The area around the airport, however, is relatively verdant. And while trees are absent, small bushes and low-growing vegetation dot the landscape — more like a tundra with plants rarely exceeding waist height.

The village of Qassiarsuk and Viking longhouses 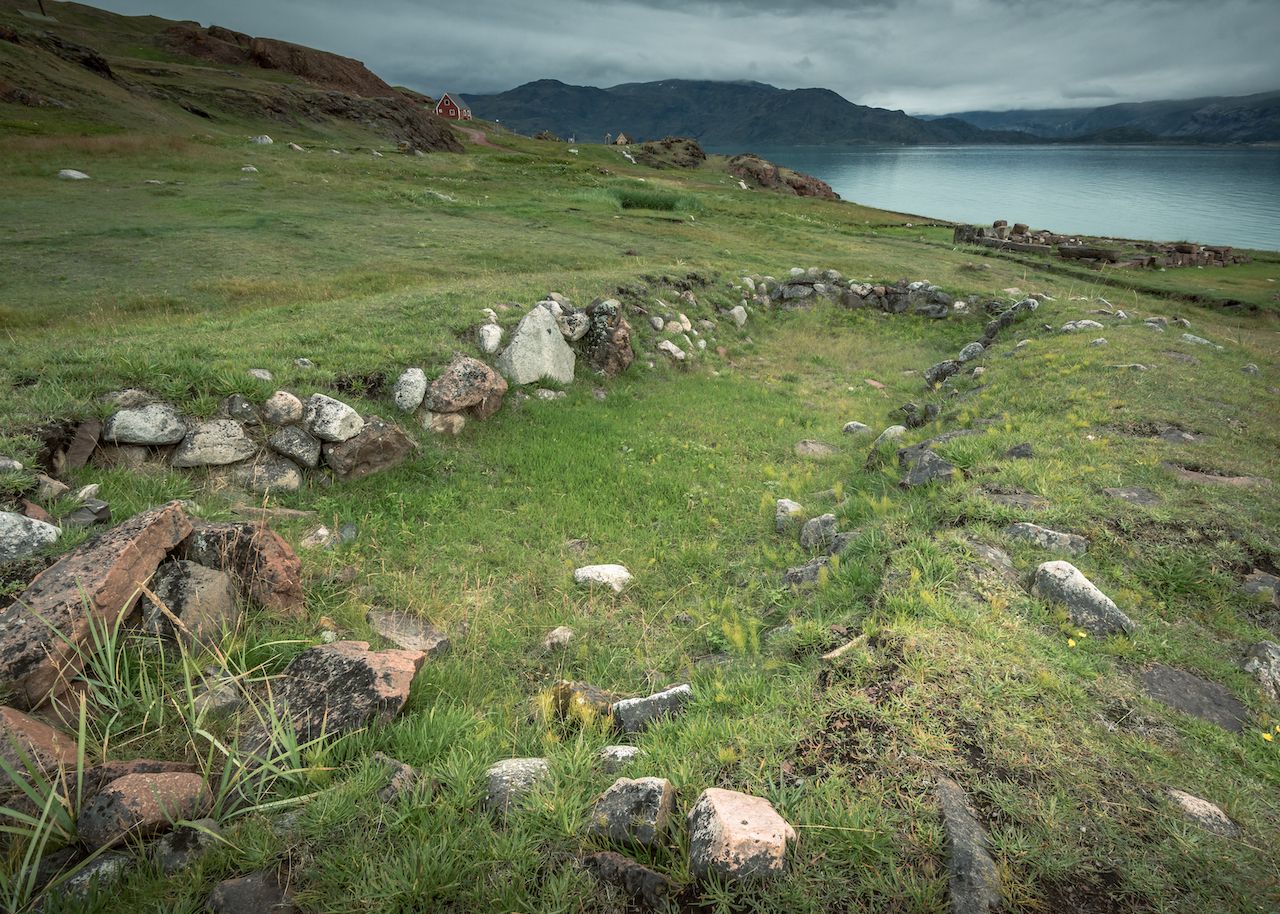 Upon arrival, we are greeted by the owner of Tasermiut South Greenland Expeditions, Ramon Larramendi. We gather our gear but a change in the weather has delayed our departure across Tunulliarfik Fjord to the gateway of this adventure, the tiny village of Qassiarsuk. Qassiarsuk has a population of roughly fifty residents, most of whom are members of sheep farming families. Modest wooden farm houses in an assortment of bright colors line the edge of the fjord, while large barns provide shelter during the harsher winter months.

Once the weather clears, we load our gear into the RIBs (rigid inflatable boats) for a bumpy and chilly ride across the fjord. As we approach the opposite side, a large bronze Viking statue of Leif Eriksson on a hillside overlooking the fjord pays homage to this historic settlement. Long before Qassiarsuk existed, Eric the Red (father of Leif Eriksson) founded the Norse settlement of Brattahlid here. Ruins of the Viking longhouses pepper the landscape as the statue of Leif Eriksson watches from his perch. Only the low, rock based foundations remain from the settlement from over 1,000 years ago. The wood and turf roofs collapsed long ago. However, for those visiting the area, a replica of a typical longhouse has been constructed close to the epic ruins.

Exploring the area around the fjord 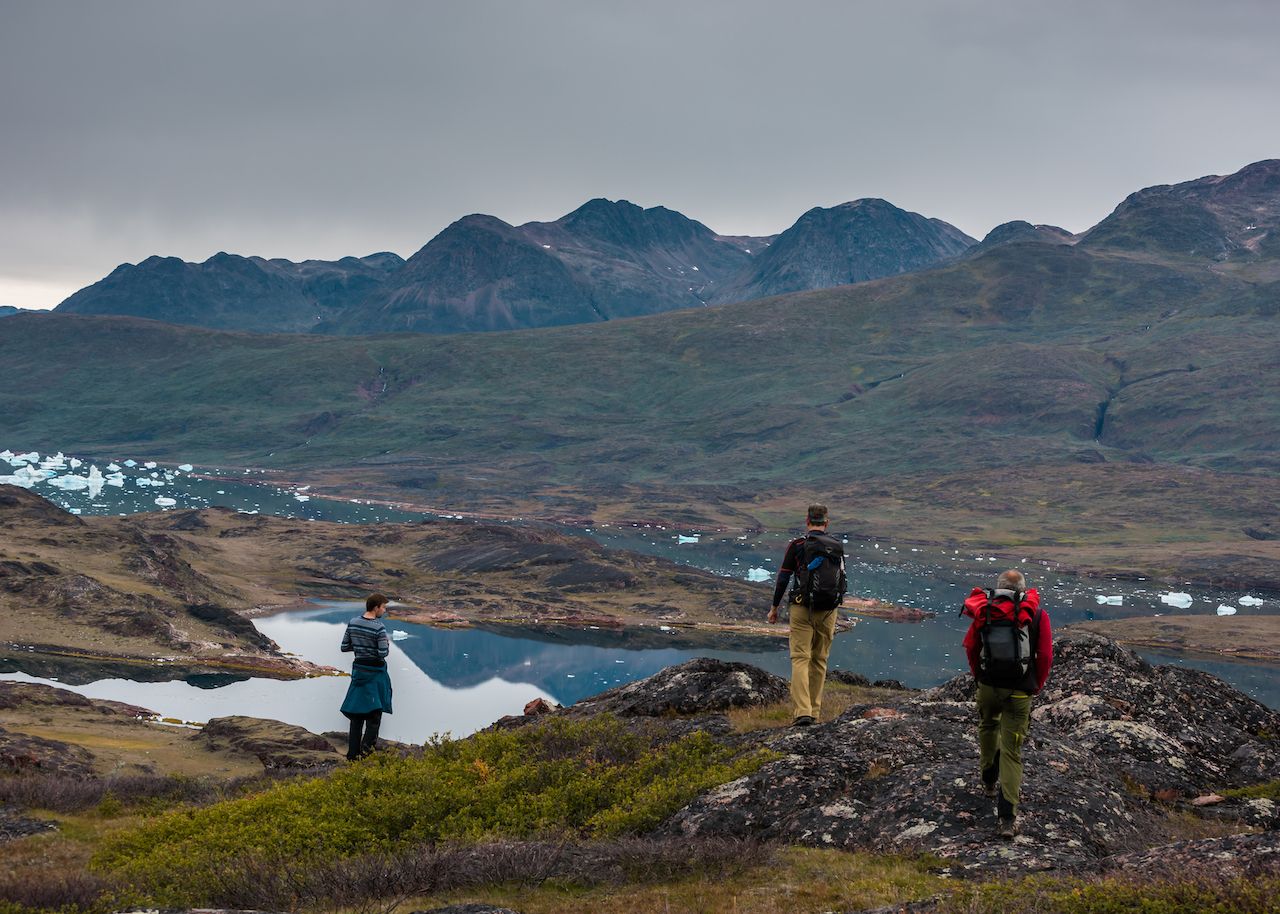 Fjords are like fingers extending out from a hand, with the area between them being the waterways. After arriving in Qassiarsuk, we loaded our bags into a well-used SUV for our traverse over the hill to a small family sheep farm located along the shores of Sermilik Fjord, one of the larger inlets in southeastern Greenland. The fjord is perpetually choked with icebergs as multiple glaciers are continually ejecting ice as they migrate south towards the sea.

The next several days are spent hiking and exploring the area around the fjord. As the landscape is devoid of trees, every vantage point offers spectacular views. From our highest point, we can see the vastness of this open fjord and the massive amount of ice that chokes the waterway. However, we are still unable to see the glacier that is the source of this ice production.

Finally entering into the fjord’s waterway 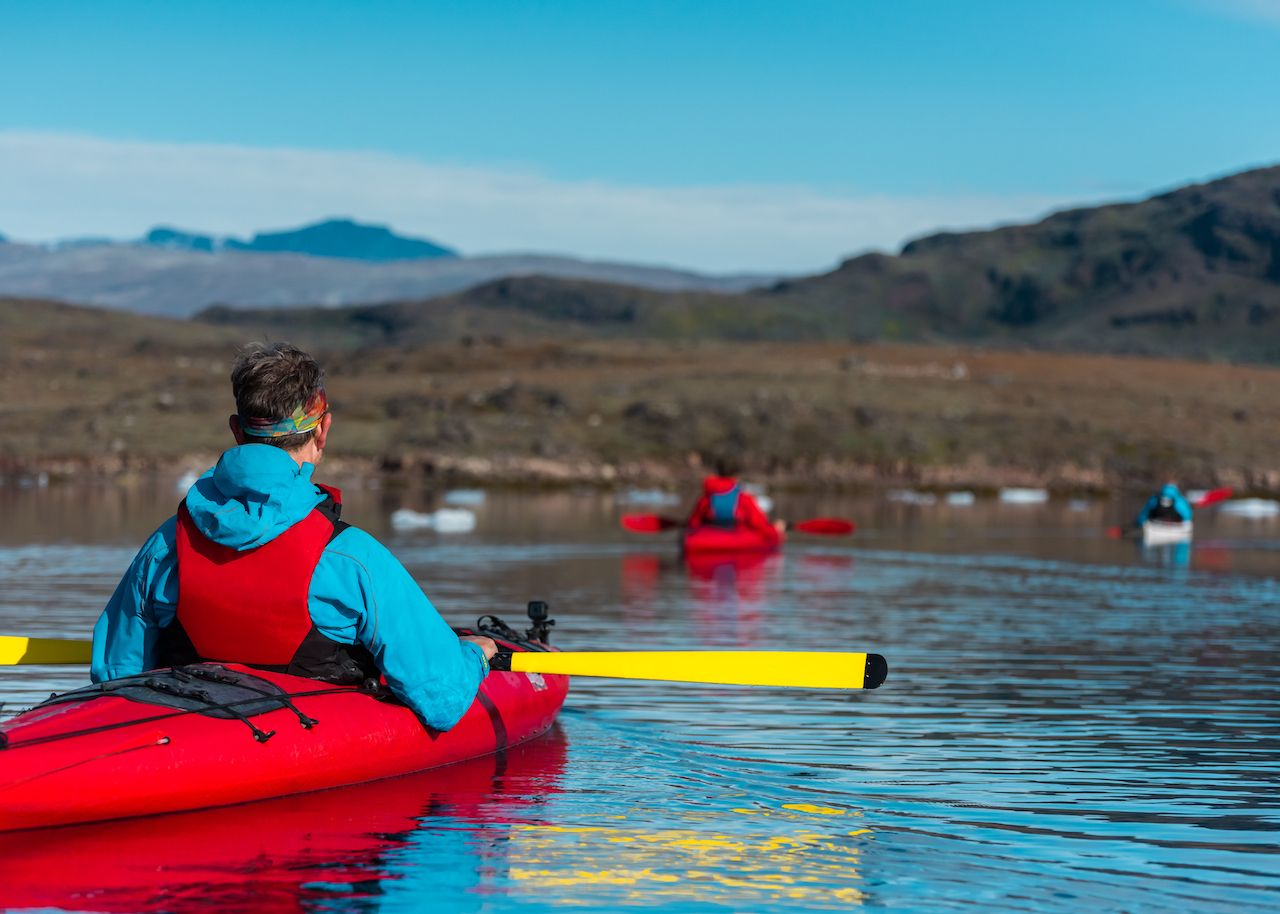 The day has finally arrived. We walk down to a protected bay that opens up to the fjord. The shallow entrance prevents ice from entering and is therefore an ideal starting point for our group of varied experience levels to begin kayaking in Greenland.

A yurt near the water’s edge serves as the equipment tent. We select an array of protective gear including paddling jackets and pants, paddling mitts, and the singularly most important piece of kit, a life jacket. We each grab a paddle, slide our kayaks to the edge of the rocky shore, enter the cockpit, secure our sprayskirt, and slip away from the shore.

Before kayaking in Greenland, I’d already kayaked on four continents (including Antarctica) and came on this trip with an extensive background. There are only three of us plus our guide. The other two have limited paddling experience and our guide offers some on-water instruction with the basics of paddle strokes and safety before continuing into the open water. 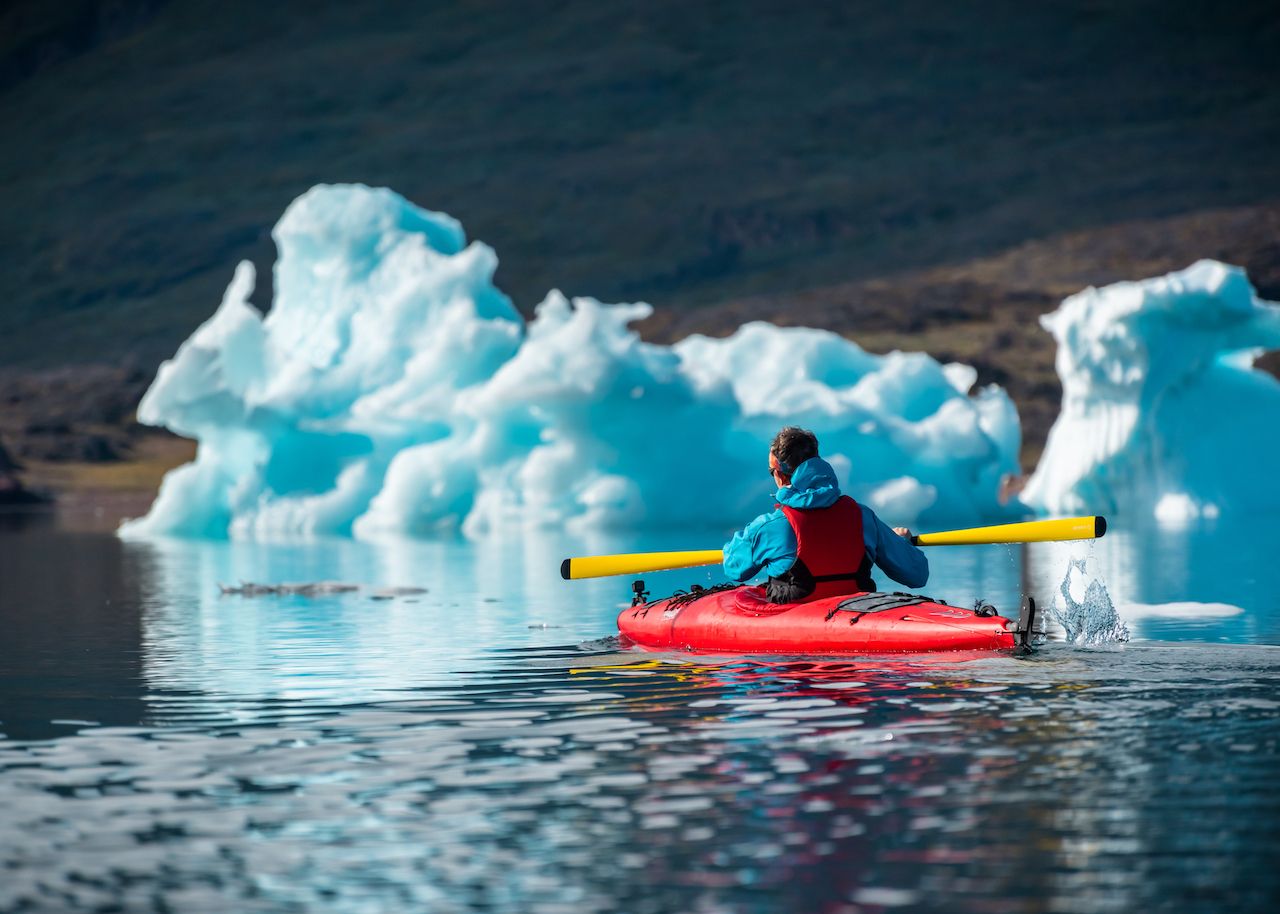 Paddling out of the bay, we emerge into what can only be described as a floating ice sculpture garden where no two showings will ever be the same. It’s almost eerily quiet, the air is crisp, and a slight breeze off the icy water chills the exposed skin. The blue icebergs, which have been under extreme pressure for millennia before being calved from the glacier, shimmer in the afternoon sun.

You can hear tiny rivelets careening down the sides of large and small icebergs before trickling into and melding with the waterway. Rocks, ranging from tiny pebbles to large boulders, can be seen embedded in the icebergs waiting for the sun to release them from their icy prison only to litter the fjord floor below.

After more than four hours of paddling, we make our way back to the equipment yurt. We drape our gear over drying racks so we can easily access it the following day.

Where the adventure really begins 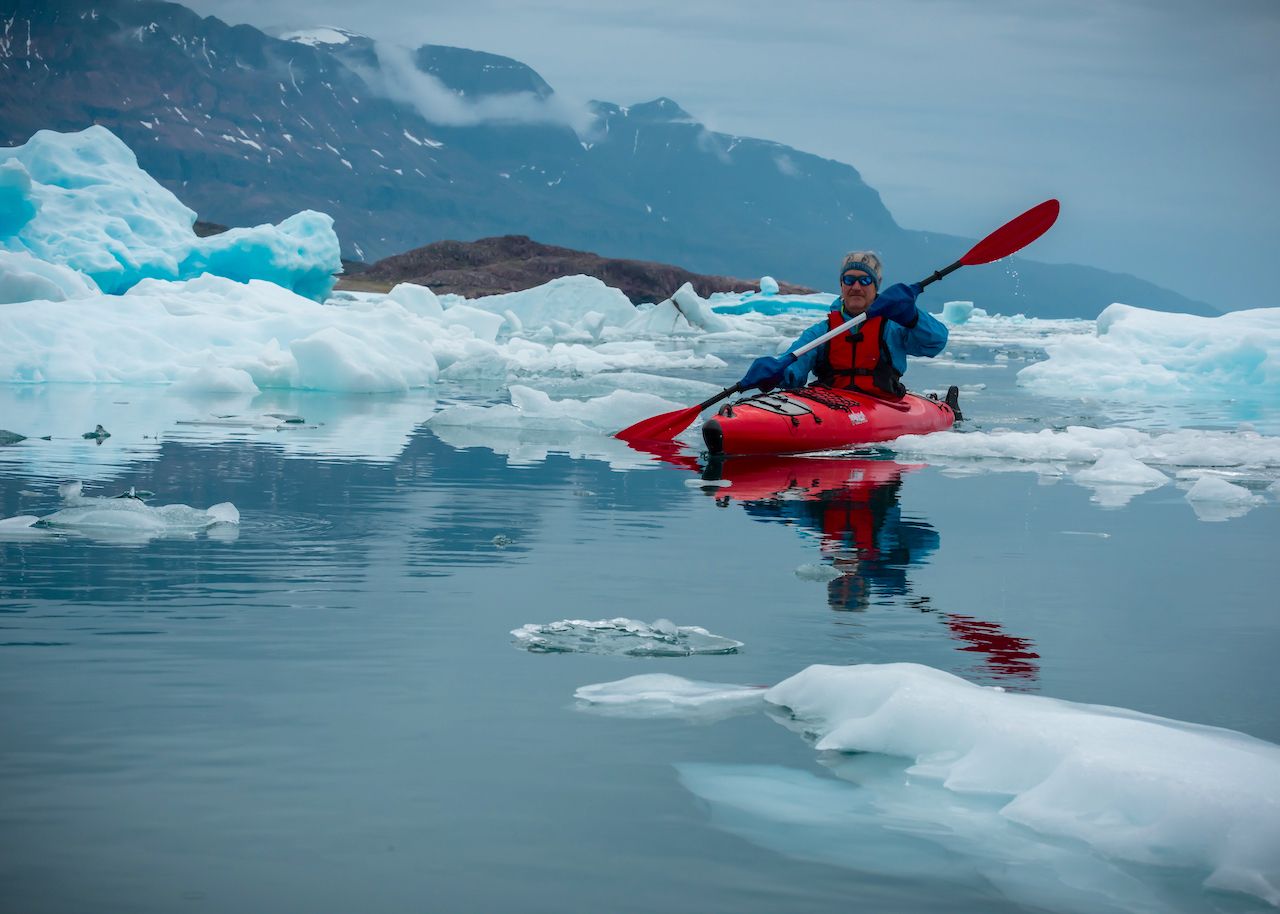 After a quick breakfast the following morning, we gather our drybags packed the night before. Stowed inside are essential apparel for kayaking, and warm dry apparel for camp. We stow the drybags and other assorted gear into the stern and bow hatches of each kayak. Once secured, we slide into our respective cockpits and, for the second day in a row, we slip away from the shore. Ice greets us as we glide into the open fjord.

The ice that chokes the waterway ranges from the size of ice cubes to leviathans that are larger than houses and some the size of small ships. And while it’s tempting to paddle towards and through the icy archway created on a large iceberg, the ice is unpredictable and subject to roll — crushing anything below it.

After paddling for more than three hours, we stop on a shoreline. There, our guide grabs the lunch bag and we head up the hillside for a bird’s-eye view of the fjord that contains even more ice than the stretch we have just paddled. Perhaps, we are getting close to the source.

After lunch, we continue onward through the maze of black water and ice. The rain begins to fall and we are thankful for the sprayskirts that keep the cockpit warm and dry. The rain continues and we reach a distant point across the fjord. We set up camp in the rain and retreat to our tents to rest and thaw out a bit. Our guide beckons us to join him in the cooking tent. We all sit around quietly, too tired to talk much, and we devour the meal he has prepared.

After dinner, I return to my tent and drift off in the silence only infrequently interrupted by the distant calving of prehistoric ice and the drizzle of rain that pelts the rainfly.

The source is revealed 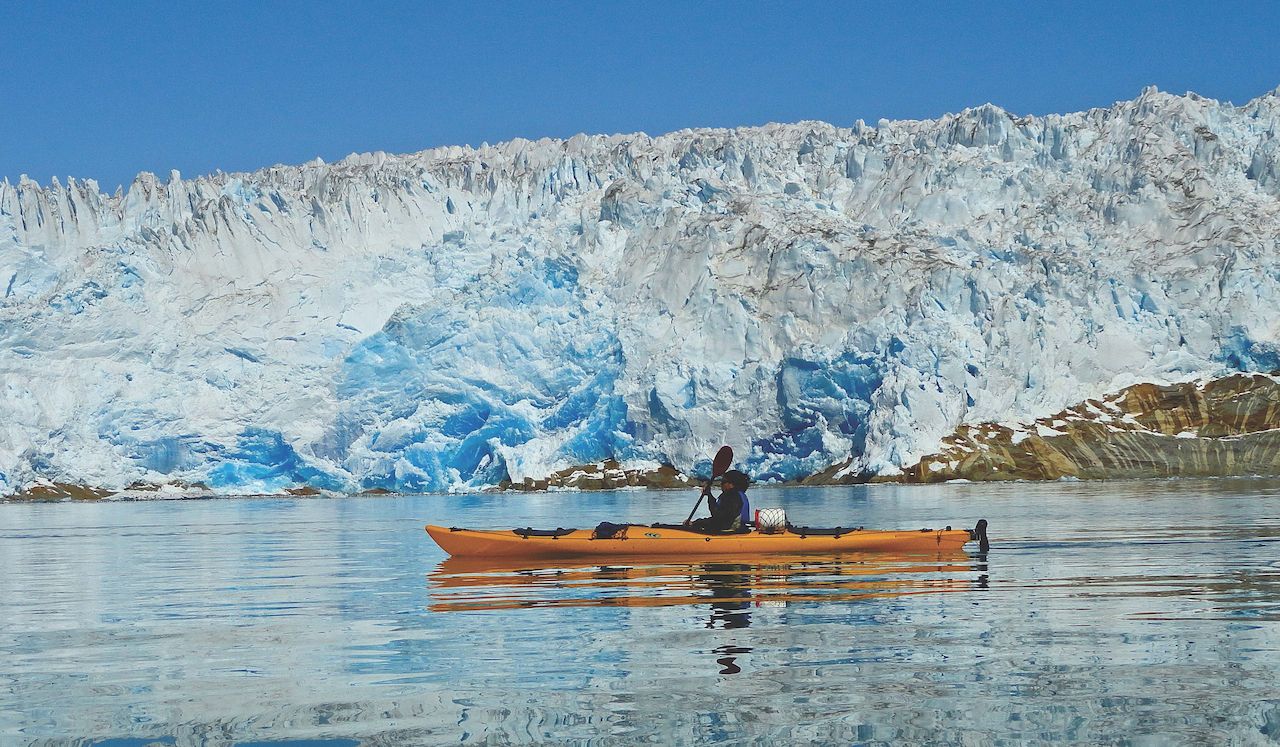 The rain stopped sometime during the night, but I hesitate to leave the warmth of my sleeping bag. We gather in the group tent for breakfast and our guide describes the hike up the hillside behind our shoreline camp. There’s a saddle located between the two peaks in the distance. The imposing sound of the glacier continues to grow as we inch closer and closer to the summit.

Once we reach the precipice, we are greeted with a mesmerizing scene. Our eyes can see the ice being ejected from the vast Greenland ice sheet as it progresses southward. Located at the back of the waterway, the immense wall of ice rises from the water and soars skyward. As the ice cracks, it echoes across the fjord before crashing into the water below. The moment is repeated over and over.

This is Eqalorutsit Glacier. One of many, this glacier is part of the vast ice sheet that covers most of Greenland stretching northward for more than 1500 miles. The exit for the ice seems to be congested, forming a bottleneck to the open waterway. Periodically, the ice next in line in the queue is expelled to join the ever-increasing collection. It’s fascinating to watch this perpetual action that has been occurring on end for thousands of years.

That night, we stayed in perhaps the most remote campsite at which I’ve ever slept. It’s just another reward that comes with kayaking in Greenland.

The ultimate guide to all 2022 national park permits in the US for hiking, backpacking, and more
6 beautiful frozen waterfalls in Montana to see this winter
This European country has 6,000 grizzly bears. Here’s where to see them up close
5 states with the most scenic and laid-back nude beaches
Your next road trip could be in futuristic electric RVs and Airstream trailers

Dear travelers to Greenland, please don’t come visit until you understand these 8 things

6 ways you spend the holidays in Greenland

After 6 weeks, the sun just returned to Greenland. Here’s how it looked.

12 little things you miss when you leave Nuuk, Greenland

18 images that capture the barren beauty of Greenland perfectly

6 commandments for living in Greenland