For devout Christians across the globe, the last week of Easter is known as Semana Santa or “Holy Week,” an intense festival of colorful imagery and religious symbology. Arguably the most expressive and elaborate celebrations, featuring float-filled parades and deafening fireworks, take place in Latin American countries from Mexico to Argentina. The week is particularly spectacular in Guatemala, where local people have evolved the festivities to include unique events that entwine older, indigenous beliefs with those of the church.

Semana Santa traditions started in Spain over 1,500 years ago, spreading outward with its colonizing conquistadors who sowed the seeds of their Catholic faith in their wake. The Guatemaltecos of the 16th century saw some similarities between the belief systems of the ancient Maya and Catholicism. For instance, the Mayan God Maximón, whose effigy nowadays comes cloaked in colorful garments and completed with a cigar, is said to have been reincarnated to protect his people, much like Jesus.

And so, in some parts of Guatemala, the outwardly drunken and rambunctious god Maximón can be found parading next to Christ’s crucified form. Guatemala’s more flamboyant Semana Santa moments take place in the days from Palm Sunday until the day before Easter Sunday — which this year is April 14-20. 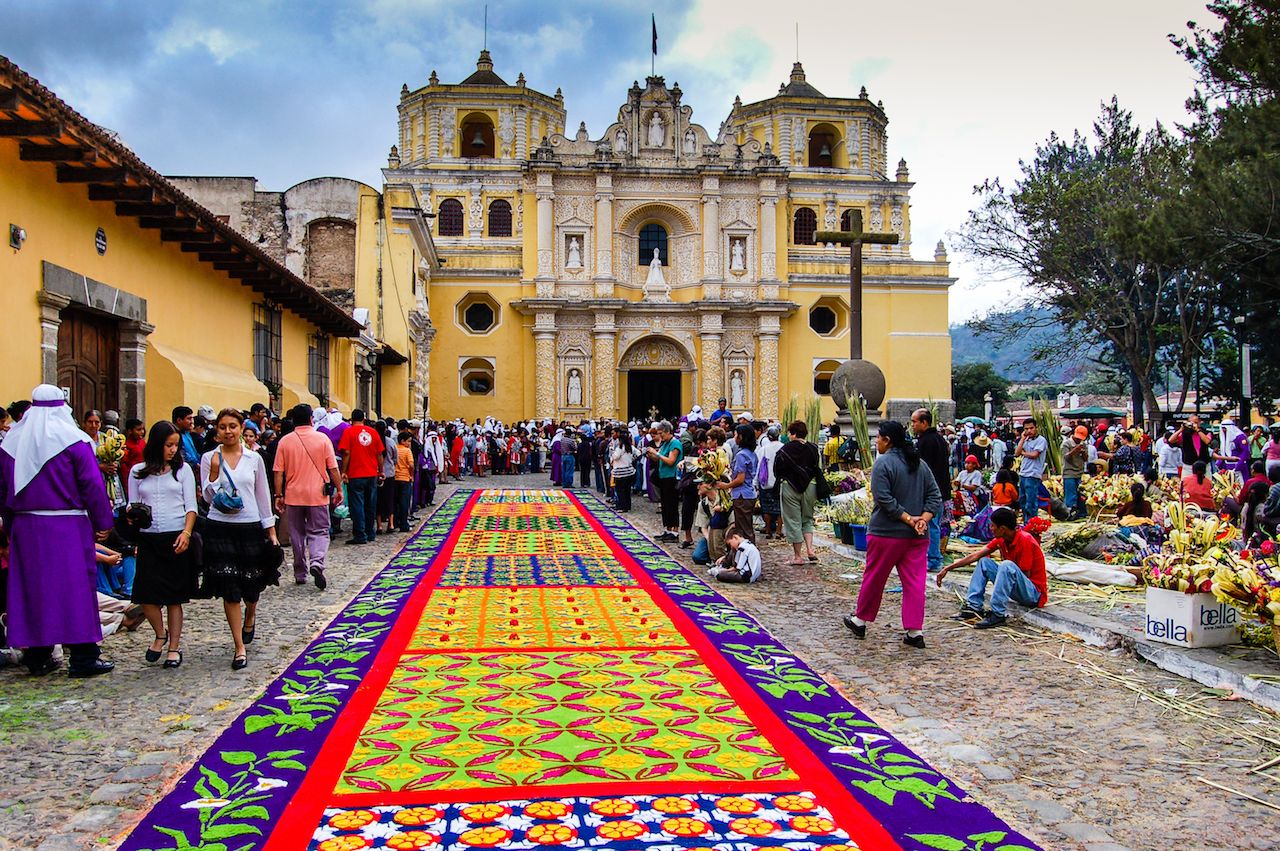 Few places are better to witness an ancient tradition than a town untouched for centuries. Atop the Guatemalan highlands at the base of a towering volcano, Antigua’s colonial architecture is almost perfectly preserved. This, ironically, is thanks to multiple earthquakes that saw the town’s developments abandoned and resulted in its apt name, which translates to “old” or “antique.” Today, Antigua’s cobblestone streets have become the most popular locale for tourists wanting to soak in the authenticity of its Semana Santa parades. During the last week of Easter, the tiny town swells to almost 15 times its standard population. 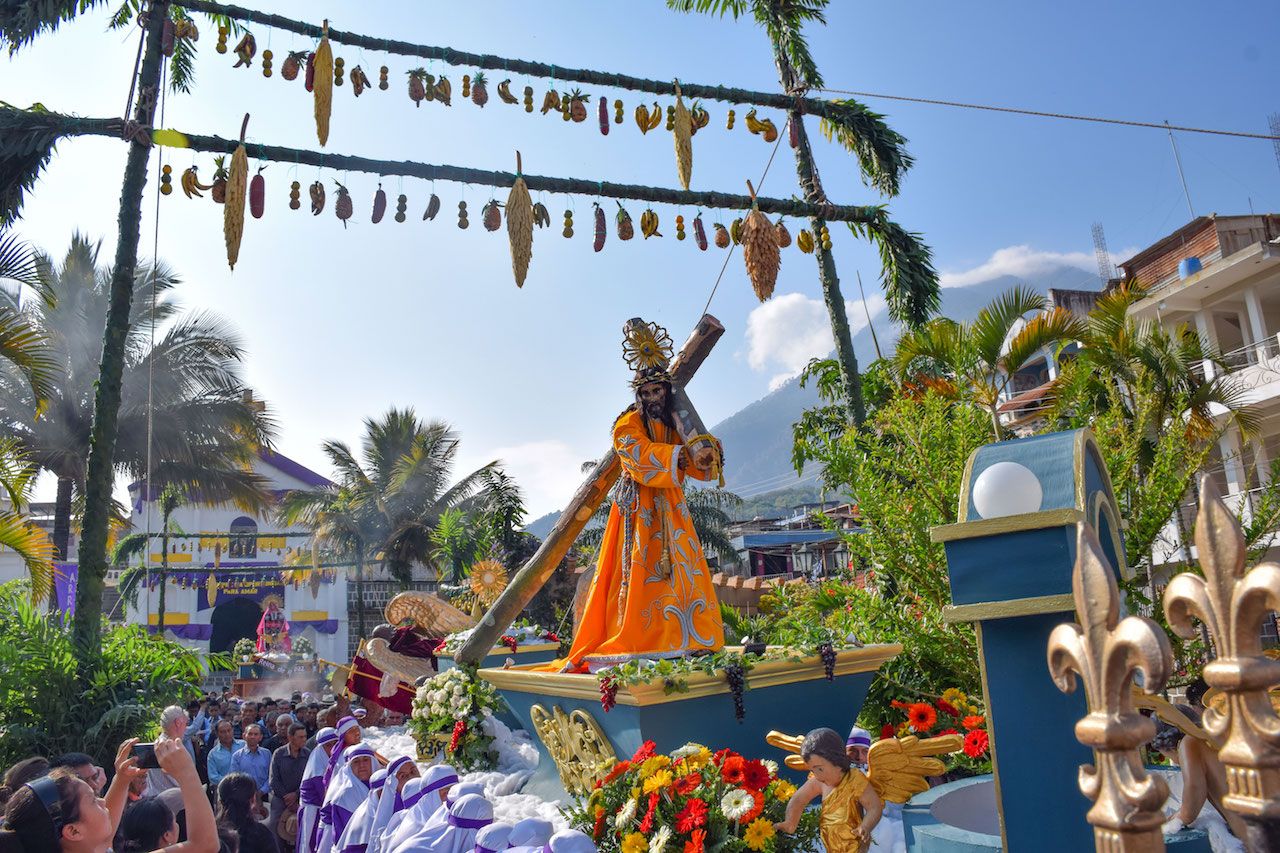 The atmosphere of processions in San Pedro La Laguna on the shores of Lake Atitlan is a world apart from the packed streets of Antigua. Here, the celebrations have a relaxed local vibe that isn’t swept away in a swell of tourists. San Pedro’s traditions have survived with more Maya influence than elsewhere, which is evident in symbolism adorning streets around the main Catholic house of worship, Iglesia San Pedro. Multiple vibrant archways, decorated with offerings of tropical fruits, are erected along the processional route that surrounds the church. A day of particular fervor for locals is Good Thursday, when mothers dressed in brightly colored traditional Tz’utujil garments ready their young ones in purple robes and white lace for an early morning parade leaving from Iglesia San Pedro.

Where to meet San Simon aka Maximón 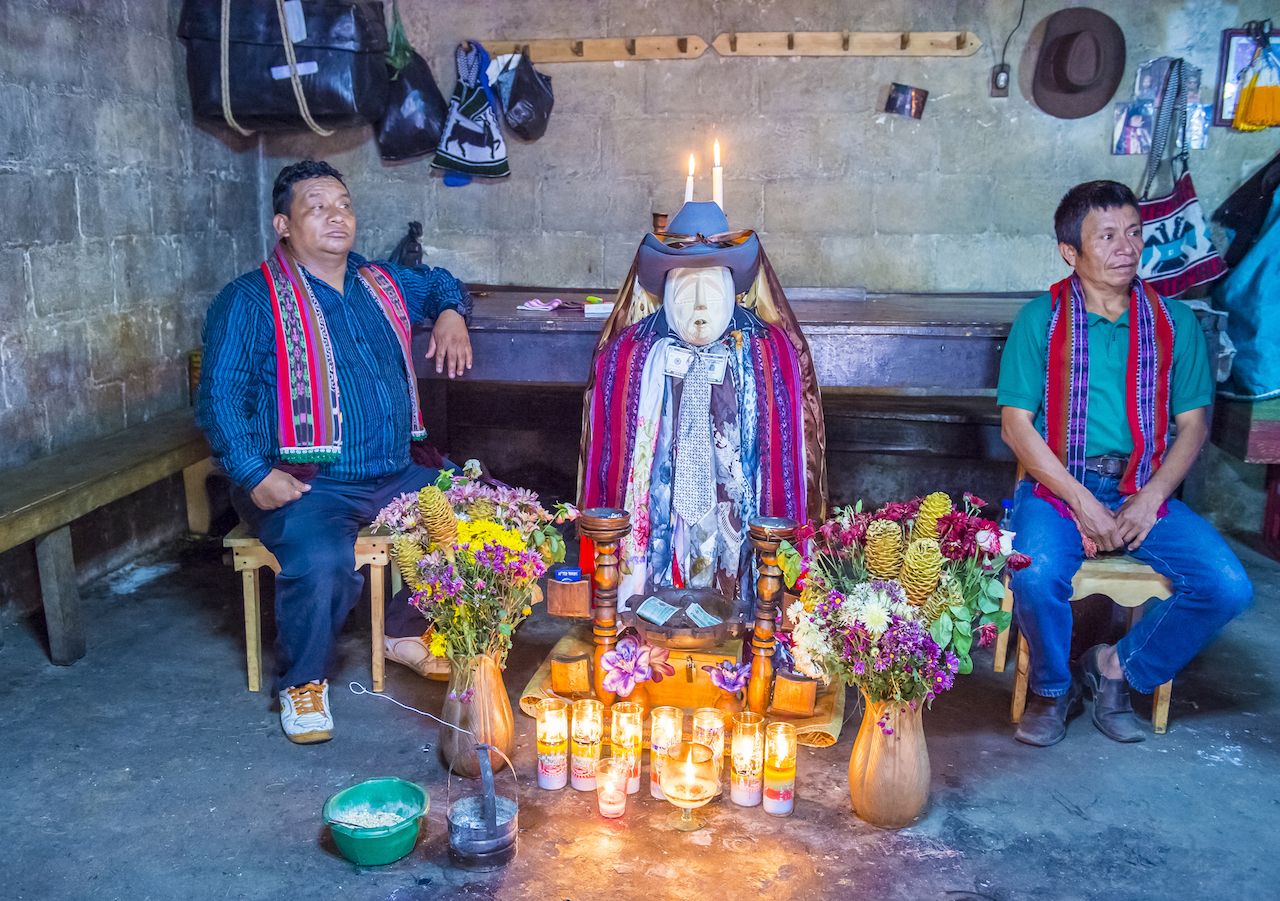 On the opposite side of the Lake Atitlan, reachable by a quick, cheap, and awe-inspiring ride across the steep-rimmed lake, is the town of Santiago. On Good Friday of each year, the Mayan trickster god, Maximón, comes out of his temple home to be paraded around Santiago. Prior to Maximón’s annual release, his special attendants — drunk and smoking cigarettes to appease their god — place a noose around his neck and hang him from the chappel’s rafters.

This macabre act is actually about life rather than death. His Wednesday midday hanging takes place in the knowledge that Maximón will be reincarnated in time for Jesus’s crucifixion commemoration on Good Friday. Many of the more orthodox Catholics in the village view the trickster god as a demi-devil, while plenty of other locals have found room for this Guatemalan “saint” in their belief system. After the parades of Good Friday, Maximón’s effigy is transferred to another villager’s house for a year.

The ephemeral and allegorical alfombras 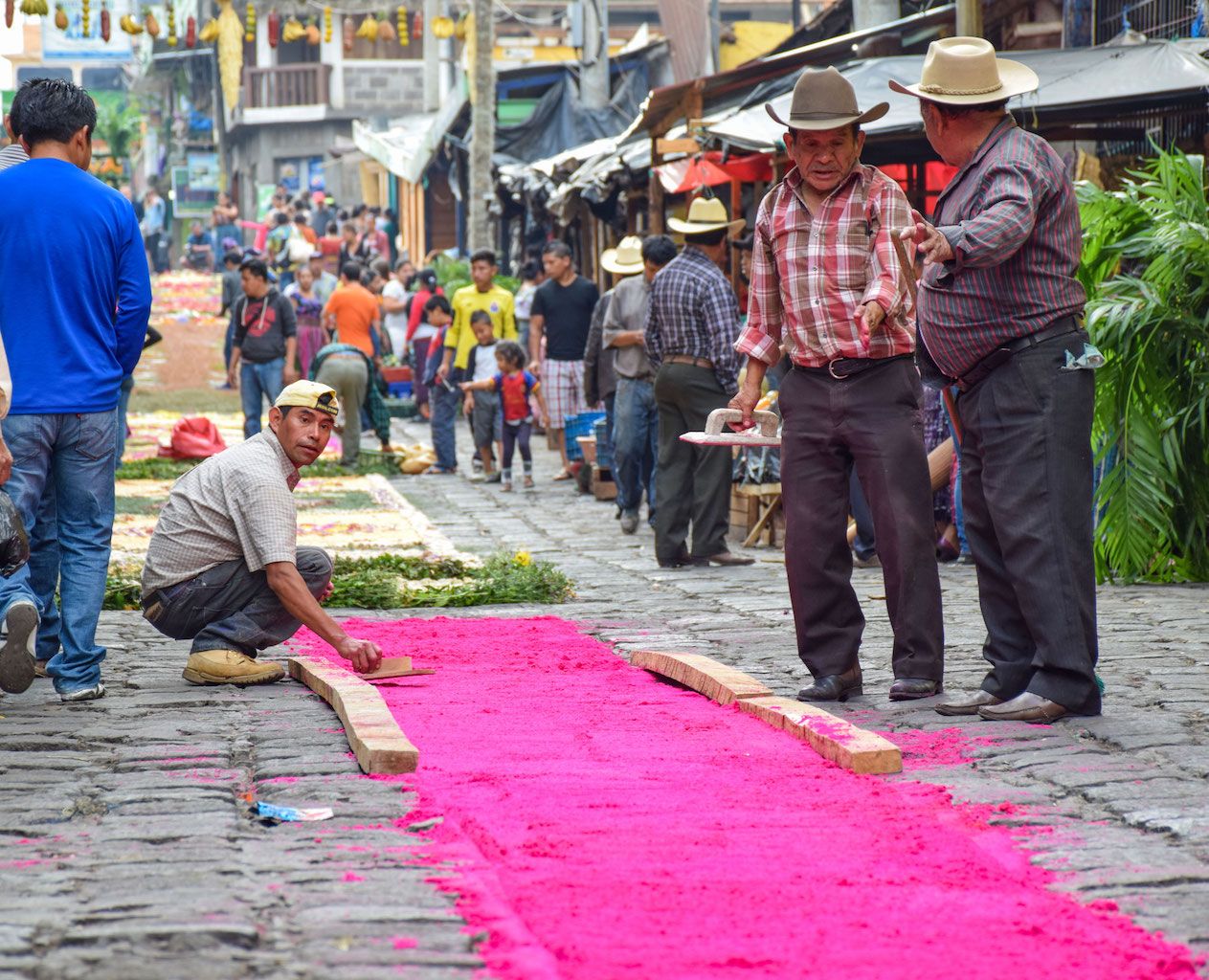 Lovingly laid out on the floor around many Guatemalan churches, alfombras are a unique highlight of Semana Santa throughout both Guatemala and Honduras. These dazzling displays of intricately handcrafted carpets are usually prepared by families who for generations have been entrusted to complete the annual art form. Twelve hours before Good Friday’s parades, experienced elders and learning youths take to the middle of the streets. Families work on their section of alfombra from dusk till dawn, attracting friends and onlookers, giving the streets a carnival vibe. 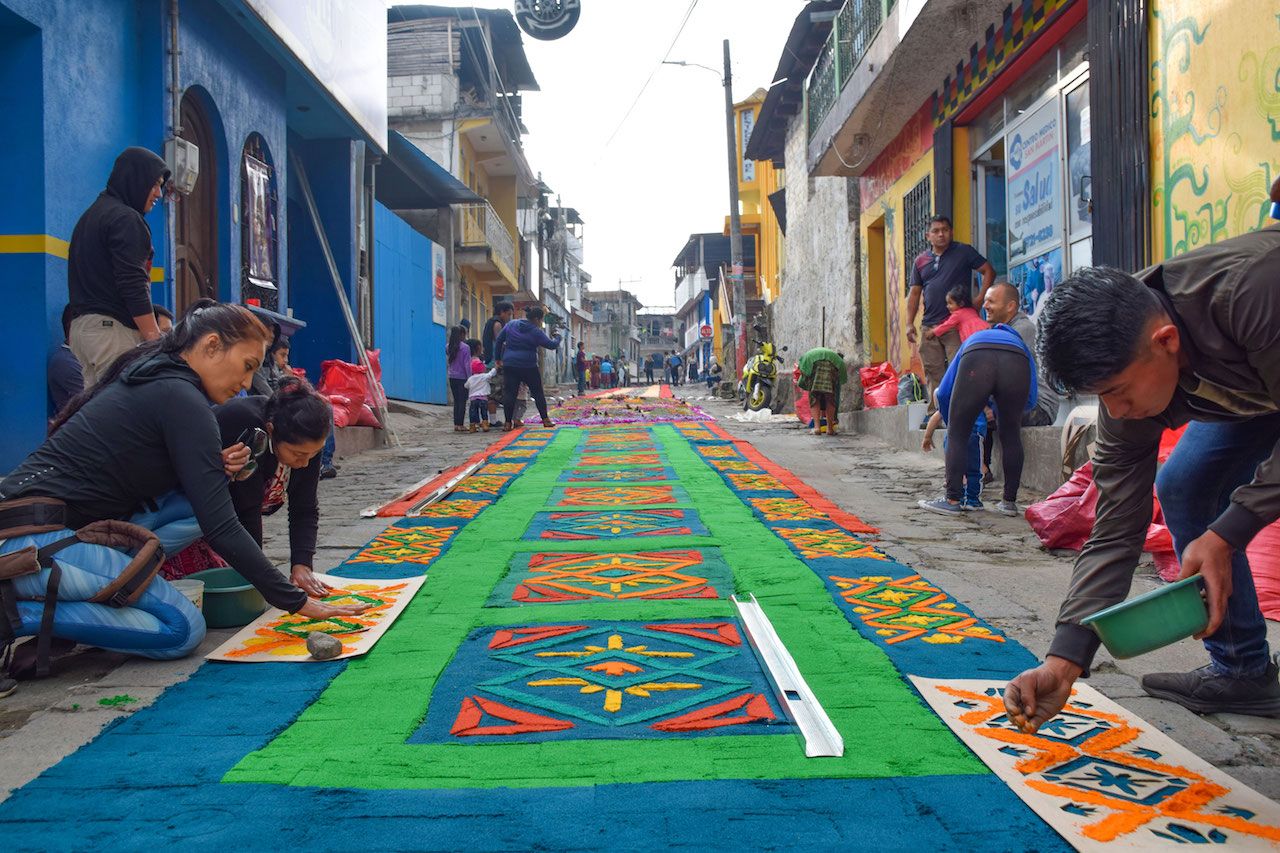 Stencils are used to carefully arrange colored sawdust, exquisite flower petals, and even nibbled corn cobs into a three-meter-wide display that can sometimes stretch for over a mile. The natural materials are crafted into vivid imagery often depicting ecclesiastical symbols like the cross, or sometimes, reflecting the Maya’s love of nature with depictions of butterflies and flowers. These carpets are ephemeral works of art not meant to last more than a few hours. By late morning on Good Friday, a mass of people leave the local church carrying floats of biblical significance that weigh as much as a grown elephant. The worshippers, dressed in eye-catching religious robes of purple and white, trample over and destroy the incredible alfombras as they follow the carpets for blocks around a route which encircles their church.

The Holy Week ends with a bang, as government and church officials send fireworks high into the sky day and night. Guatemalans know them by the onomatopoeia bombas, which are more a boom than a light display. Many locals believe the louder the bang the higher it reaches into heaven and the more evil spirits are warded off, a final say for the Maya in the syncretism of their ancient beliefs with Catholicism.

Food + Drink11 Fascinating Easter Food Traditions Around the World
Tagged
Festivals Religion Guatemala
What did you think of this story?
Meh
Good
Awesome

Learning Spanish in an Ex-Guerilla Community