Food plays a major role in most holidays, be it something to indulge in or abstain from. Easter is a time for eating, and it goes way beyond those little chocolate eggs. In the US, glazed ham is the centerpiece of most Easter dinner tables whereas lamb is the preferred protein in much of the world. In Europe, celebrants feast on sweets from breakfast to dessert, and in South America, you’ll find delicious, savory baked goods. Set aside some time to cook this Easter and let these traditional, festive recipes from across the globe help set the menu. 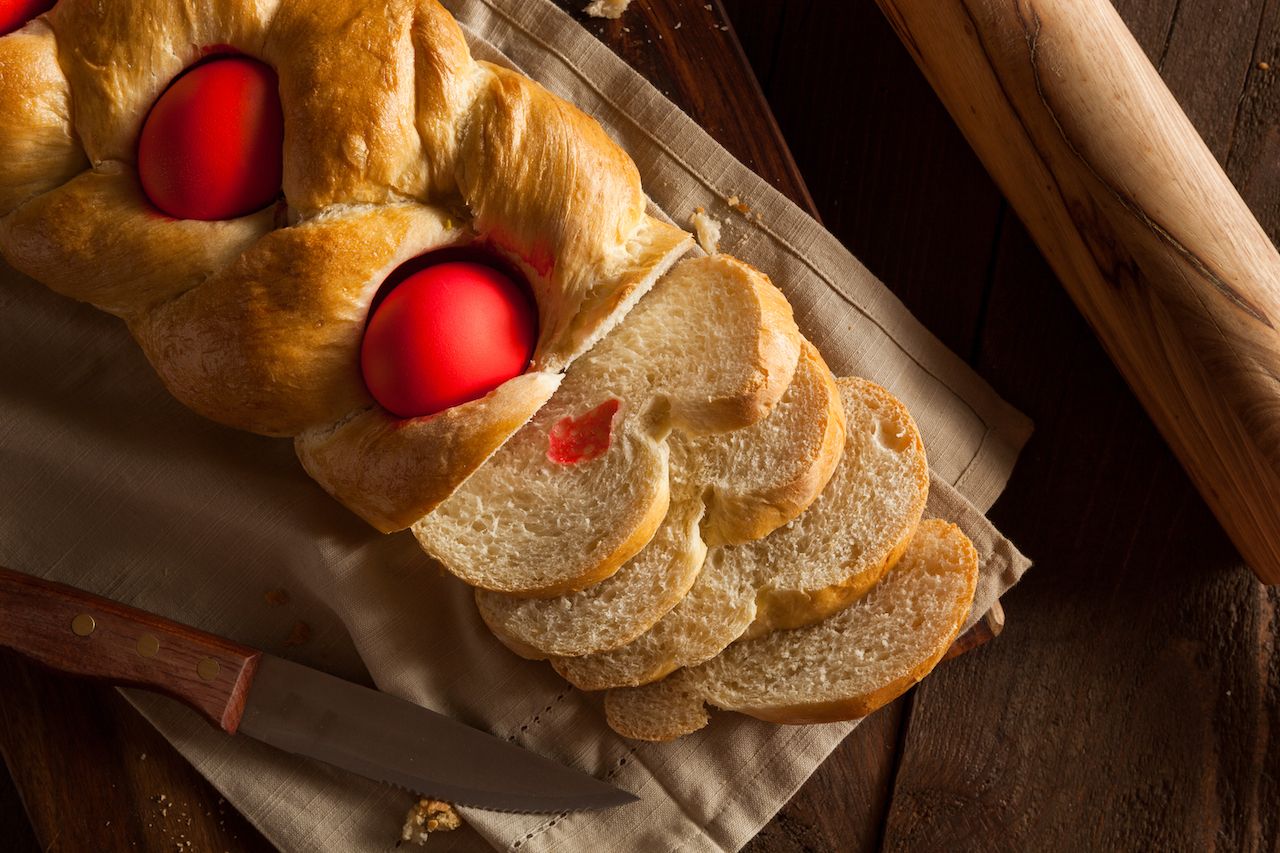 It’s not Easter in Greece without tsoureki, a sweet, brioche-like bread that’s often braided around bright red Easter eggs. Its aromatic flavor comes from mastic, resin harvested from the Mediterranean mastic tree; mahlepi, a spice made from the seed kernels found in cherry pits; and sometimes a touch of anise, orange zest, or cinnamon. Variations of tsoureki are also common in Armenia, Turkey, and any country with a large Greek community. 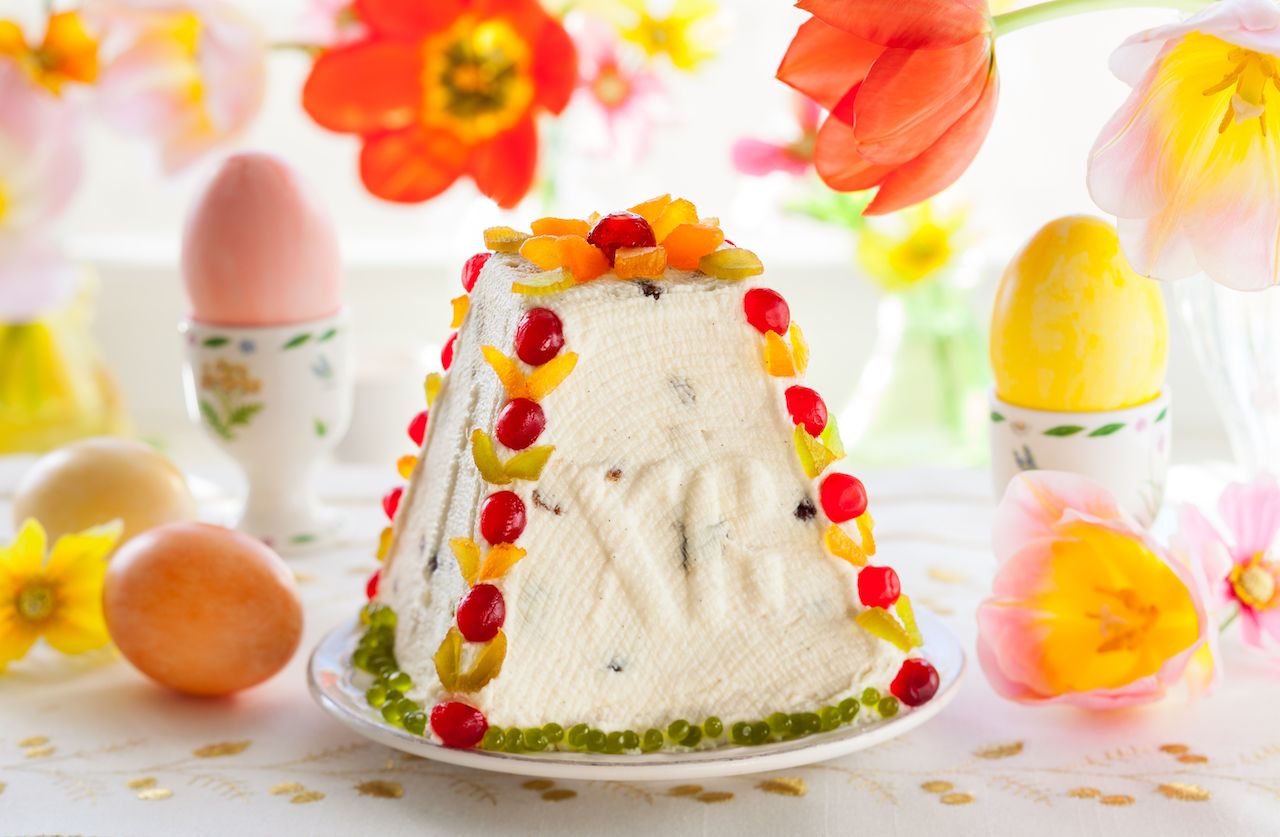 This rich and creamy Russian dessert is like cheescake’s crustless cousin. Fresh farmer’s cheese, or tvorog, is traditionally mixed with egg yolks, butter, sugar, vanilla, heavy cream, and additions like nutmeg, citrus zest, or brandy. Quark or ricotta will also do the trick. Garnish with fruit — fresh, dried, or candied — and serve alongside paska, a traditional Russian Easter bread. 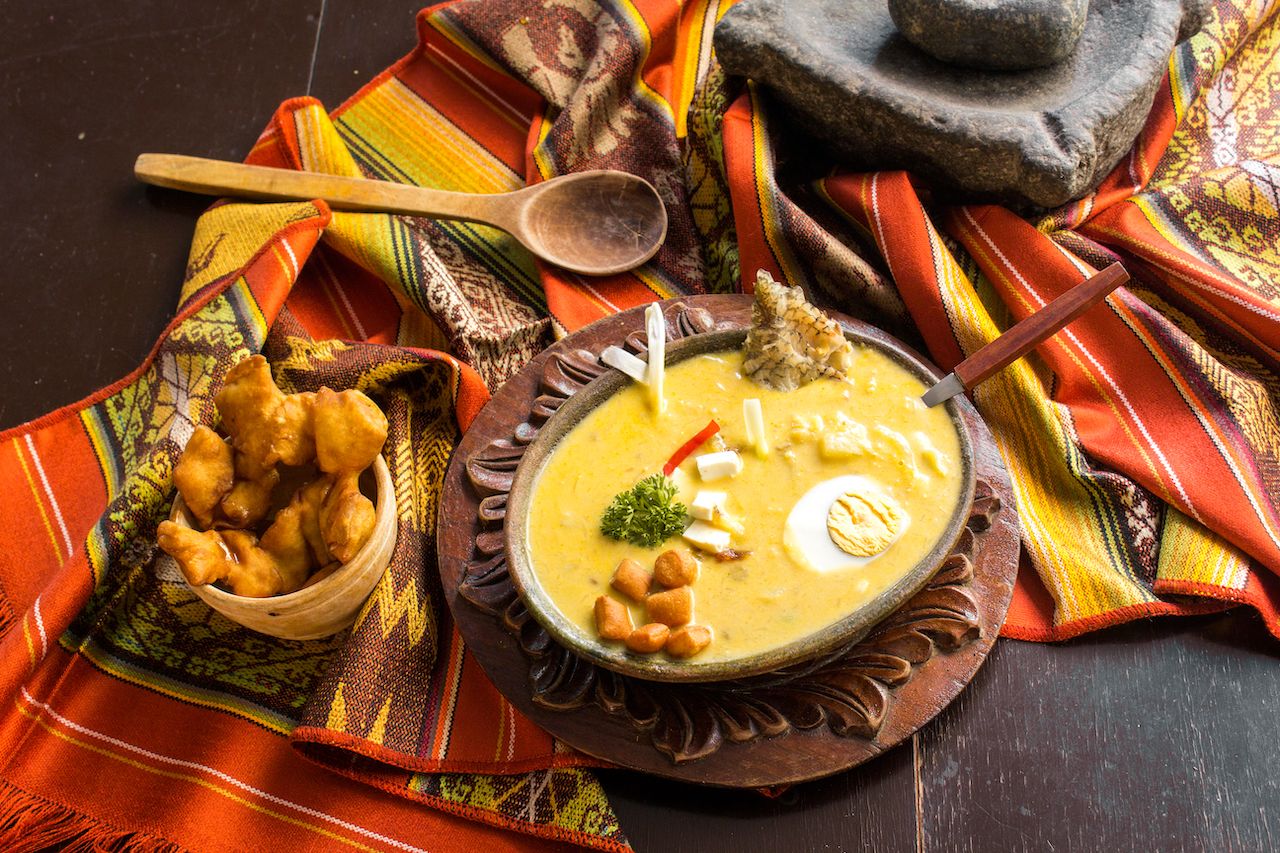 Marshmallow Peeps may be an Amazon order away whenever the craving strikes, but in Ecuador, this holiday staple is only served during Holy Week, the week before Easter. The hearty soup is made of a dozen different grains (also beans, legumes, and veggies depending on the region) as a nod to the 12 apostles, pumpkin or squash, and salt cod cooked in milk. It’s also loaded with toppings like fried plantains, peanuts, hard-boiled eggs, and even empanadas. 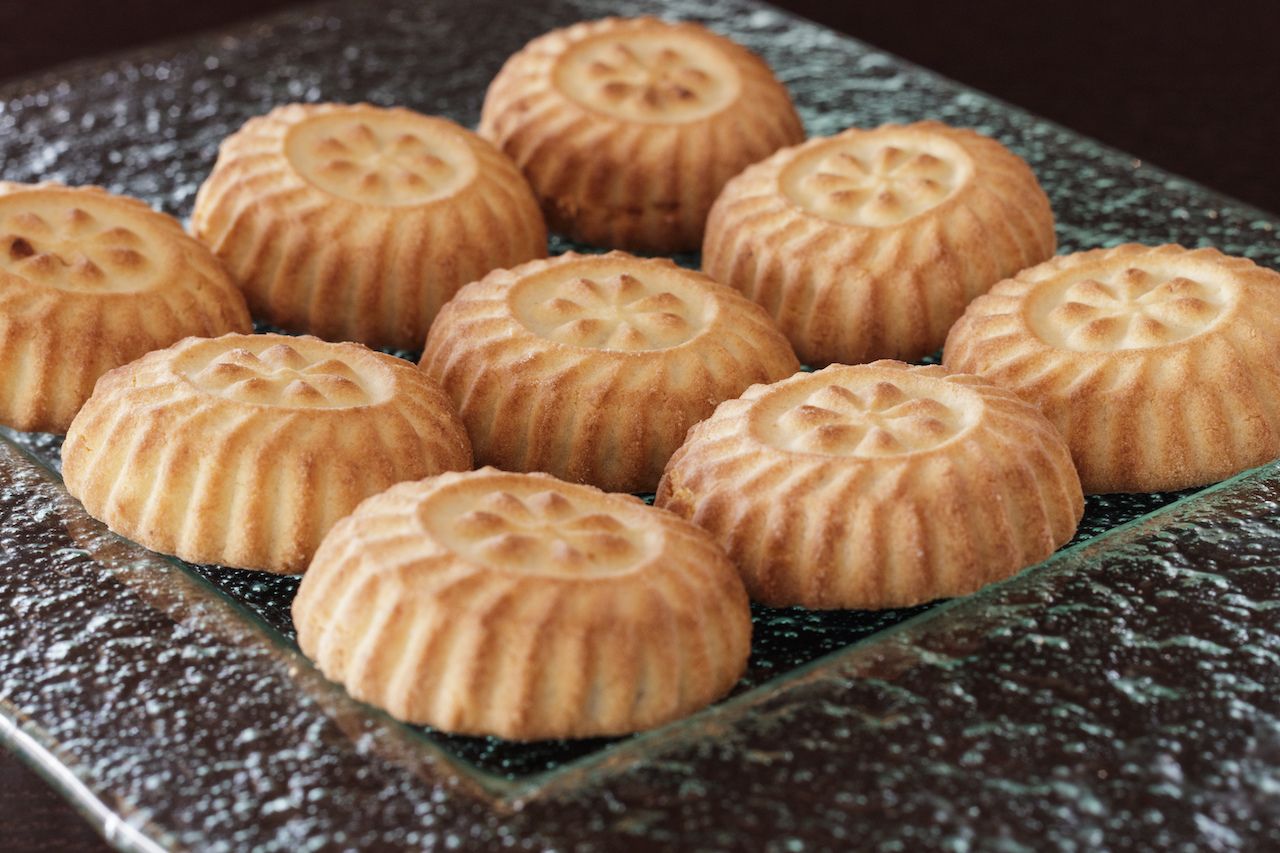 A buttery shortbread cookie filled with dates, walnuts, or pistachios, maamoul is a holiday go-to in Lebanon and much of the Middle East, particularly around Easter and Eid, a major Muslim holiday. Its origins are ancient, and traditional recipes use semolina flour and mahlab, the Arabic version of fruity mahlepi. Rose water and orange blossom add a fragrant quality. The cookie is then shaped in a special wooden mold, baked, and dusted with powdered sugar. 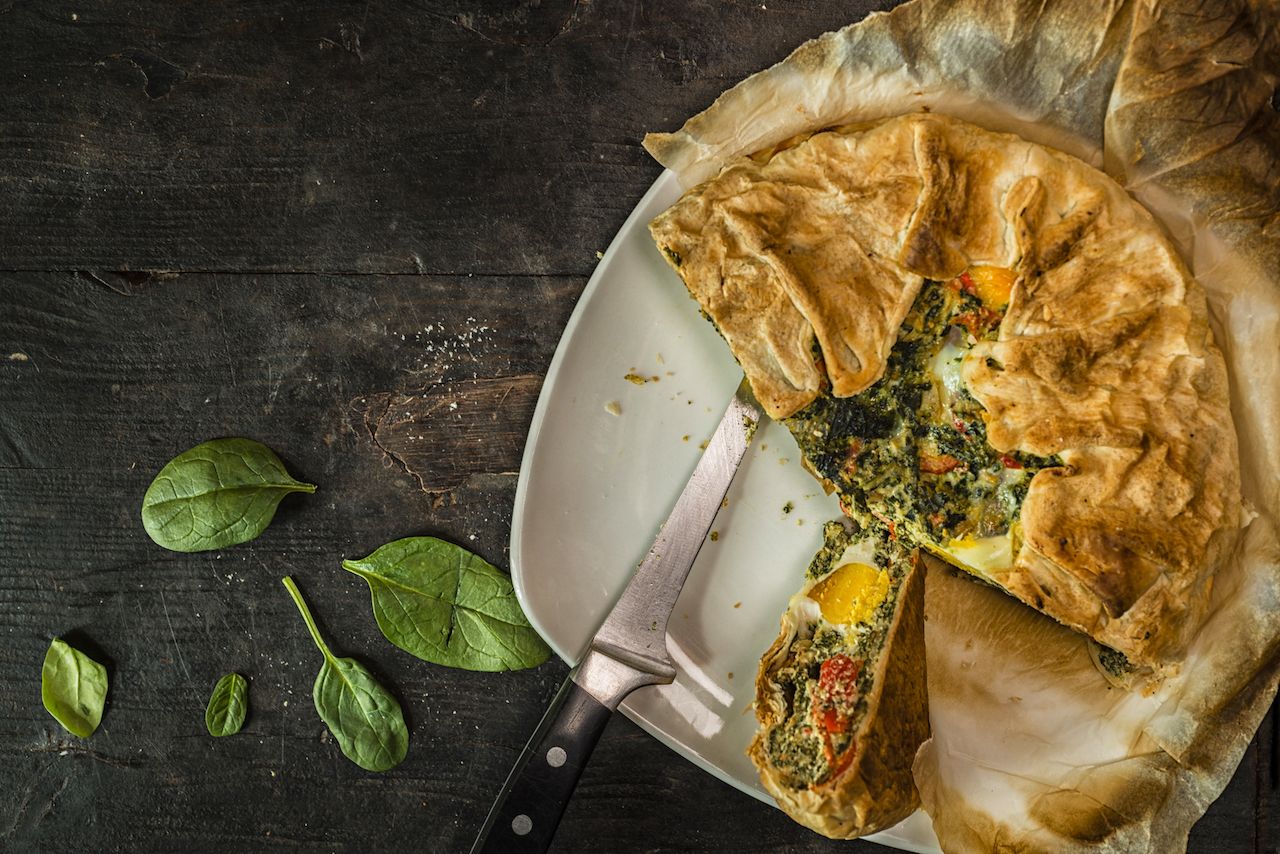 This flaky, savory pie is stuffed with a swiss chard, ricotta, and parmesan cheese mixture that’s bound with egg yolks and flavored with lemon zest and nutmeg. Artichokes and spinach make nice additions or substitutions. Italian in origin, torta pascualina has been the Easter treat of choice for Argentinians since 19th-century immigrants brought over the recipe. It’s popular in Uruguay, as well, and Peruvians enjoy a similar dish called pastel de acelga, or chard tart. 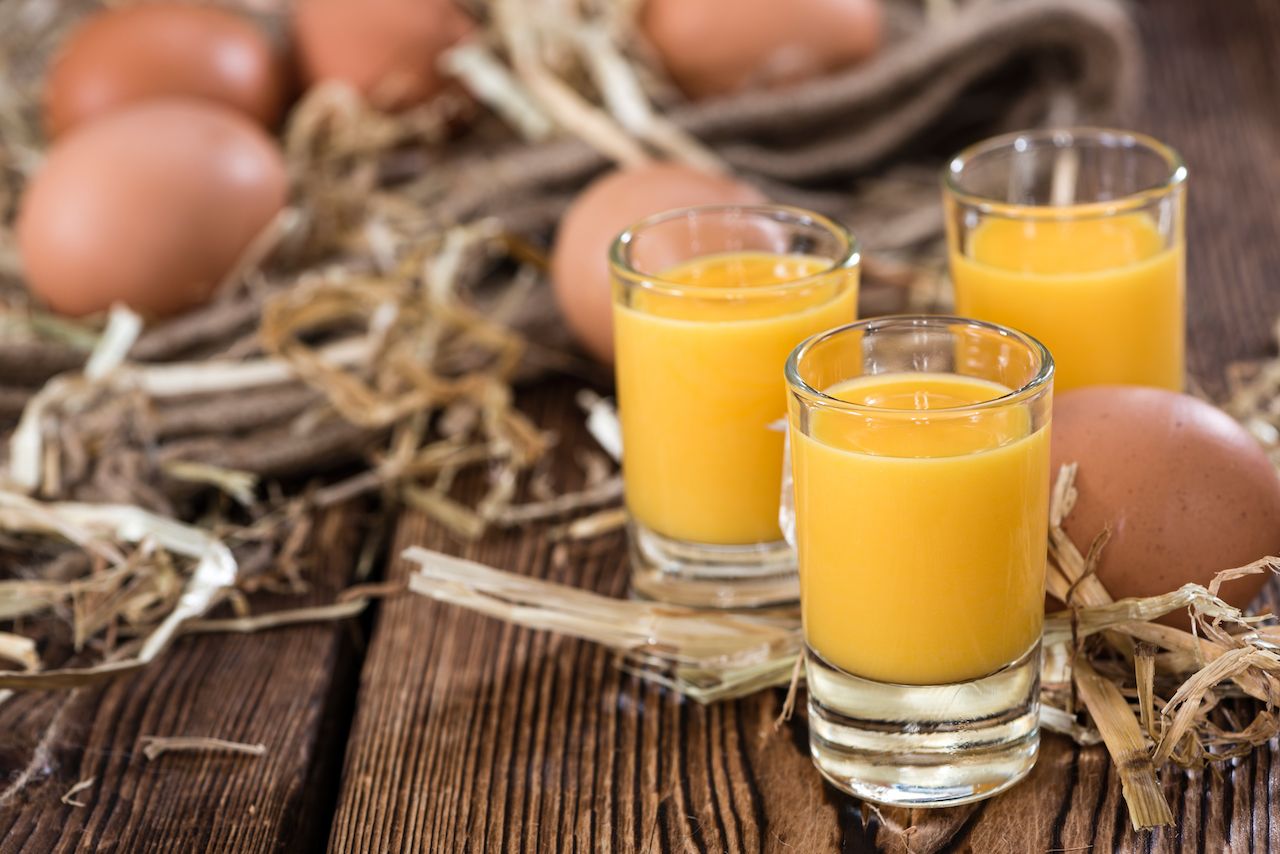 Instead of drinking eggnog, the Netherlands indulges in advocaat (from the Dutch for “lawyer’s drink,” advocatenborrel) on holidays like Easter and Christmas. It’s made with egg yolks, sugar, and brandy. Vanilla and honey, or condensed milk if you can handle the sweetness, add extra flavor. Advocaat can be made thicker, similar to a custard or pudding, or mixed with sparkling lemonade and lime juice to make a cocktail called the Snowball. 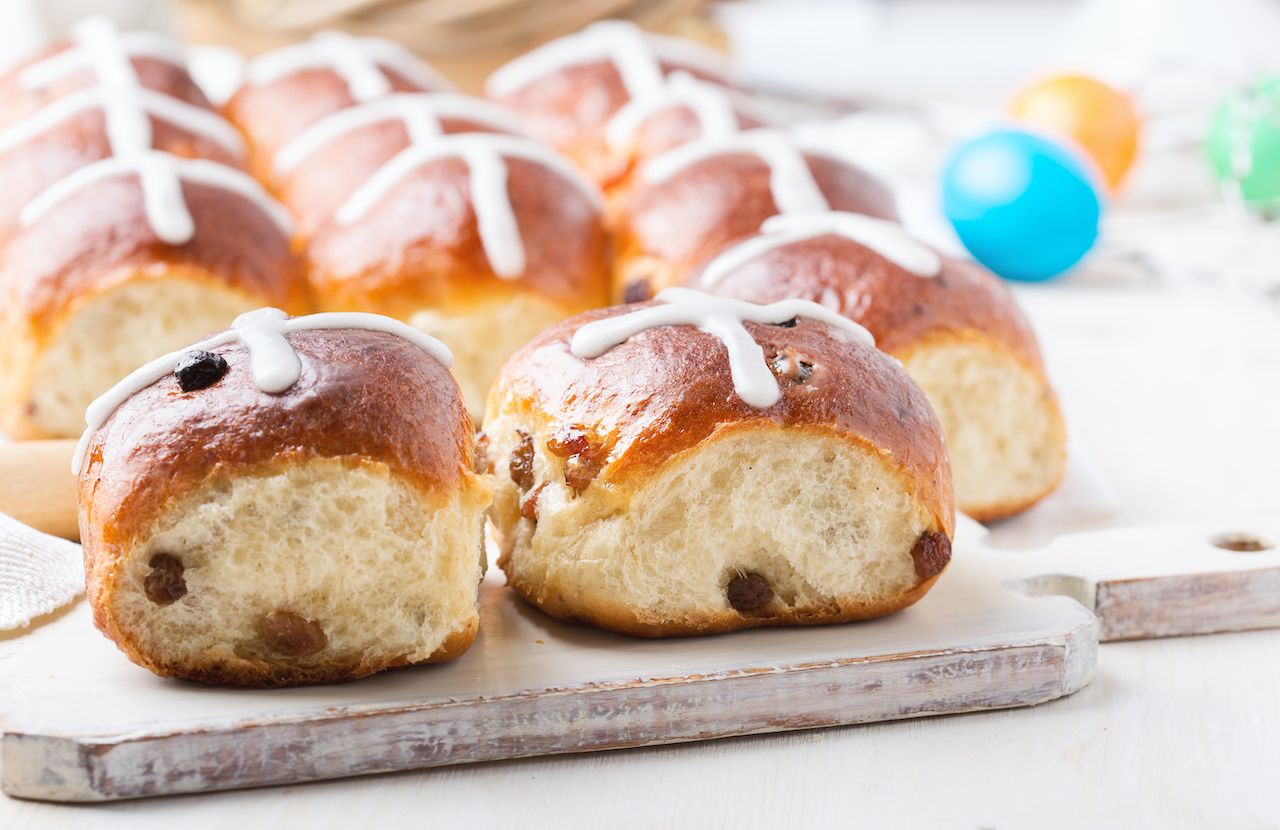 Hot cross buns are exactly what they sound like: sweet, spiced, raisin-filled buns sporting crosses that have been pressed into the dough or drawn on in white icing. They’re eaten on Easter and Good Friday around the world, but they’re particularly prevalent in Bermuda where people will sometimes stuff the buns with codfish cakes for a sweet and savory treat. Though the codfish craze hasn’t caught on yet, hot cross buns are equally big in the UK come Easter. 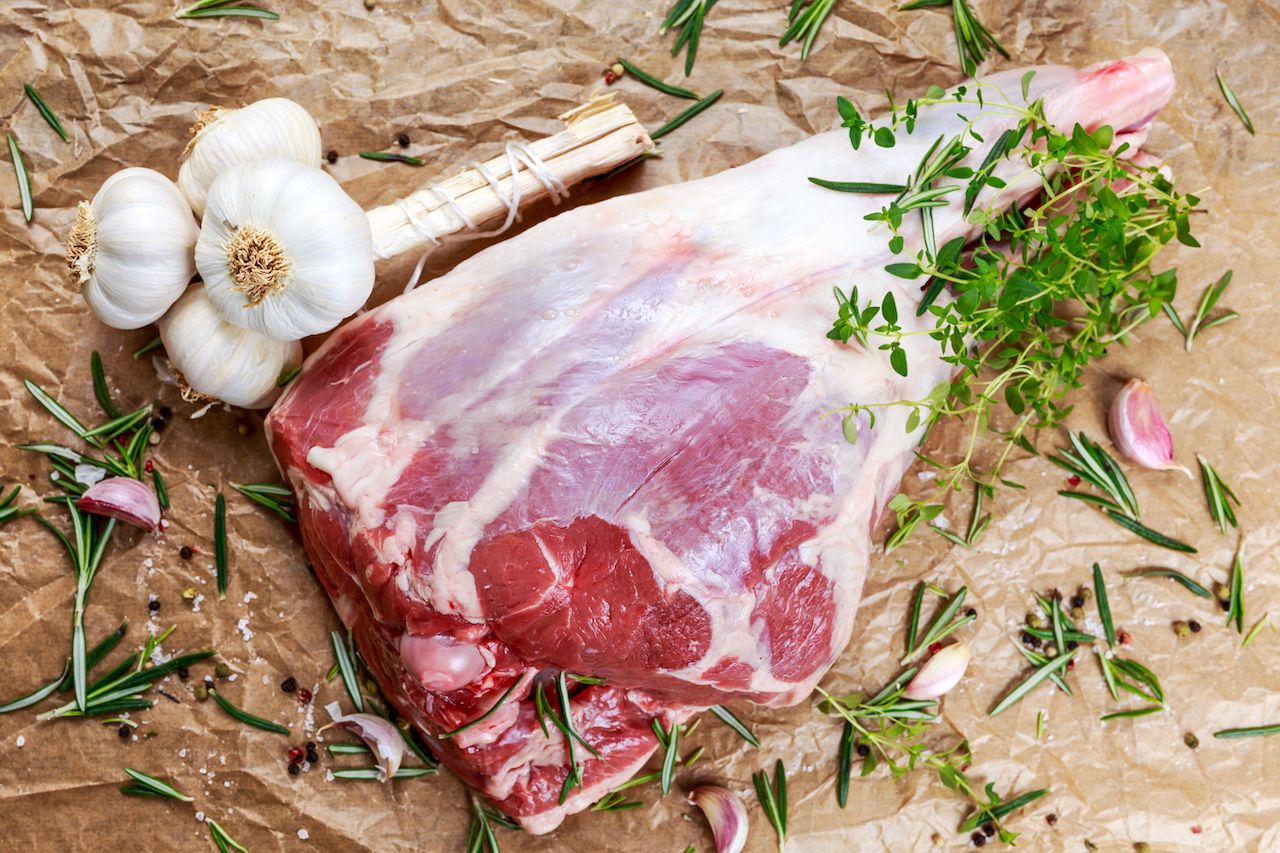 The practice of eating lamb for Easter can be traced back to old Passover traditions carried on by Jews who converted to Christianity. They do it right in France, where roasted leg of lamb, or le gigot d’agneau, seasoned with garlic and rosemary anchors Easter dinner. Pair it with pale green, kidney-shaped flageolet beans for a proper French holiday feast. 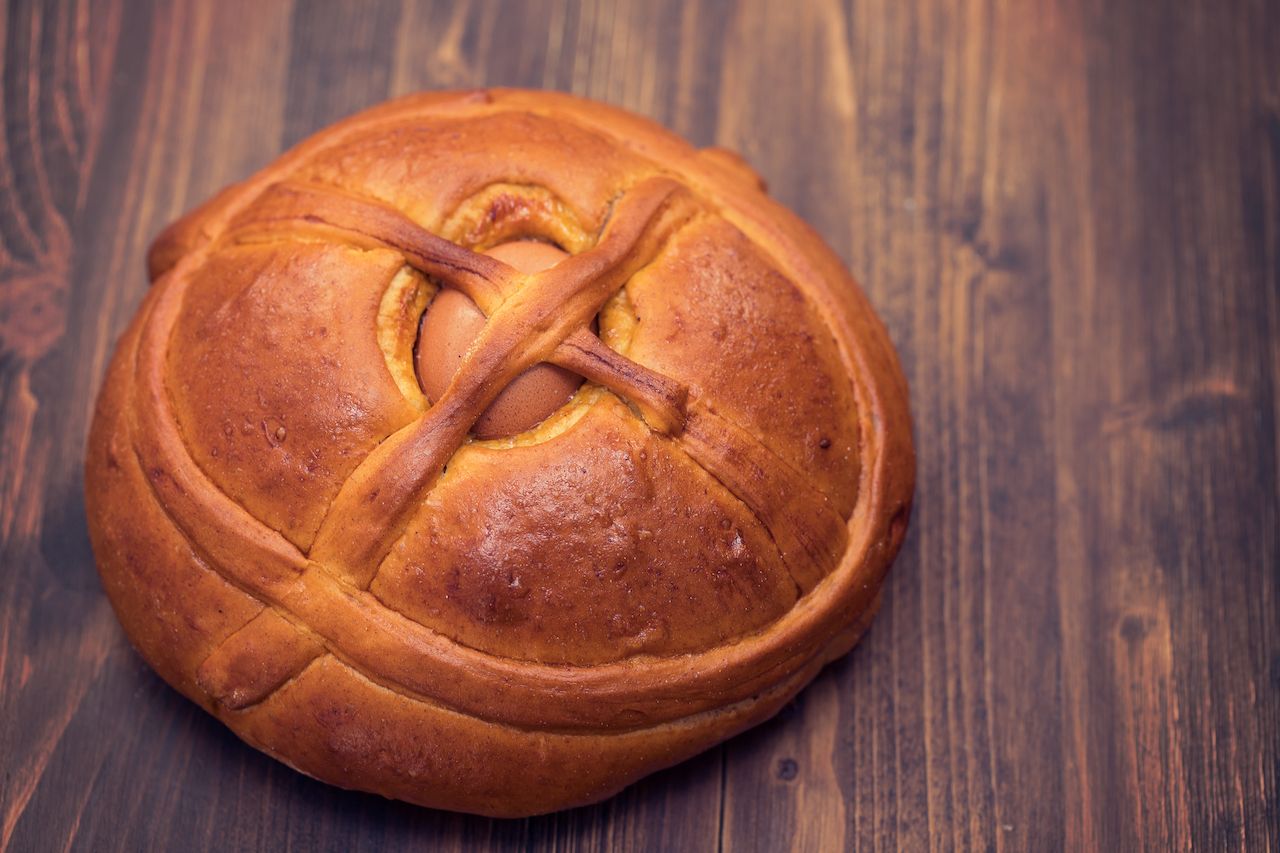 Portugal has its own version of Easter bread, folar, which can be sweet or savory depending on the region. Like tsoureki, one or more hard-boiled eggs is often baked into the top of a golden brown loaf (minus the red dye). In northern Portugal, the festive bread is sometimes stuffed with meats like ham and linguiça, a local smoked pork sausage. Sweet folar is classic in Lisbon and can be spiced up with the addition of anise, cinnamon, or powdered sugar. 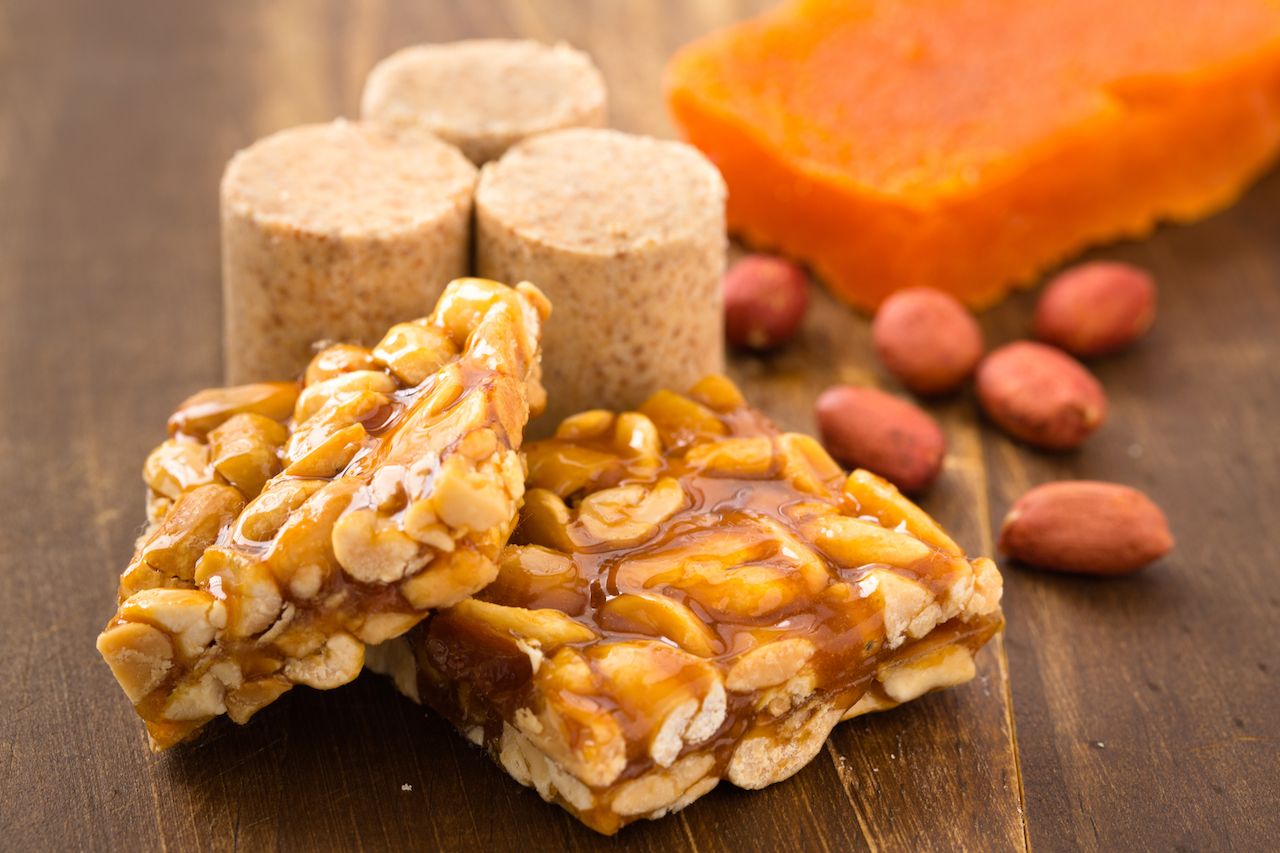 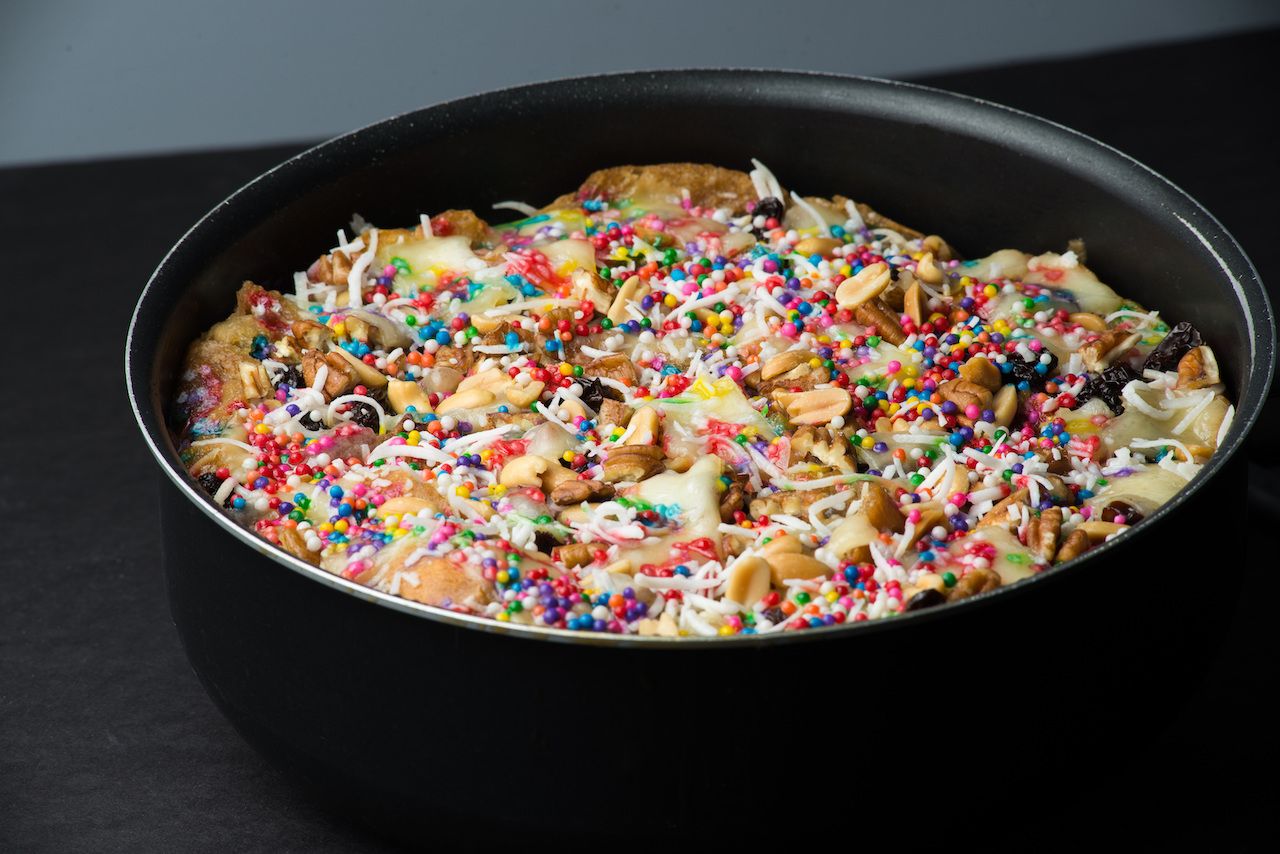 Mexico’s take on bread pudding, capirotada is enjoyed every Good Friday and Easter. Make it at home by soaking bread in syrup made from piloncillo, unrefined whole cane sugar; adding cinnamon and cloves; and throwing in a handful of raisins, other dried fruit, or even cheese and candies. Some interpret this dessert symbolically, taking the bread as Christ’s body, the syrup as his blood, the cloves or raisins as nails, and the cinnamon sticks as the cross.

Religion8 beautiful Easter egg traditions around the world
Tagged
Food + Drink Religion Holidays
What did you think of this story?
Meh
Good
Awesome