There are restaurants that serve decadent, if unhealthy, meals. And then there’s the Heart Attack Grill in Las Vegas.

Billed as a hospital-themed restaurant (though no actual medical professionals work there), Heart Attack Grill serves huge burgers ranging from the Single Bypass Burger (half a pound) to the Octuple Bypass Burger (four pounds).

The Flatliner Fries are cooked in pure lard and there are butterfat milkshakes and hot dogs, as well. Anyone who finishes the Quadruple Bypass Burger (9,983 calories, according to the Guinness World Records) gets a free wheelchair service. The food isn’t the only unhealthy highlight: unfiltered Lucky Strike cigarettes are also available. The whole operation seems to revel in being in poor taste — there are candy cigarettes available for purchase for children as well. But hopefully not many people are bringing their kids here.

It’s no wonder there are signs like the one that reads, “Cash only because you might die before the check clears.”

The Heart Attack Grill is controversial, to say the least. It’s had brush-ups with people who think that the language surrounding the business is dangerous as well as the food. It’s easy to see why. Anyone who weighs more than 350 pounds and is willing to step on a cattle scale in front of the restaurant to prove it gets unlimited free food. The website notes that customers are “patients,” orders are “prescriptions,” and waitresses are “nurses” (think sexy nurse Halloween costumes, not hospital scrubs, adding a distinct Hooters-esque atmosphere to the experience) who spank anyone who doesn’t finish their meal.

Diners are even required to don a medical gown as soon as they walk through the door. Diners tend to be entertained by this shtick, and the costumed staff is happy to take selfies with patrons.

The founder, Jon Basso, seems to gleefully court controversy, who once apparently declared he wanted to make food “so bad for you it’s shocking.” 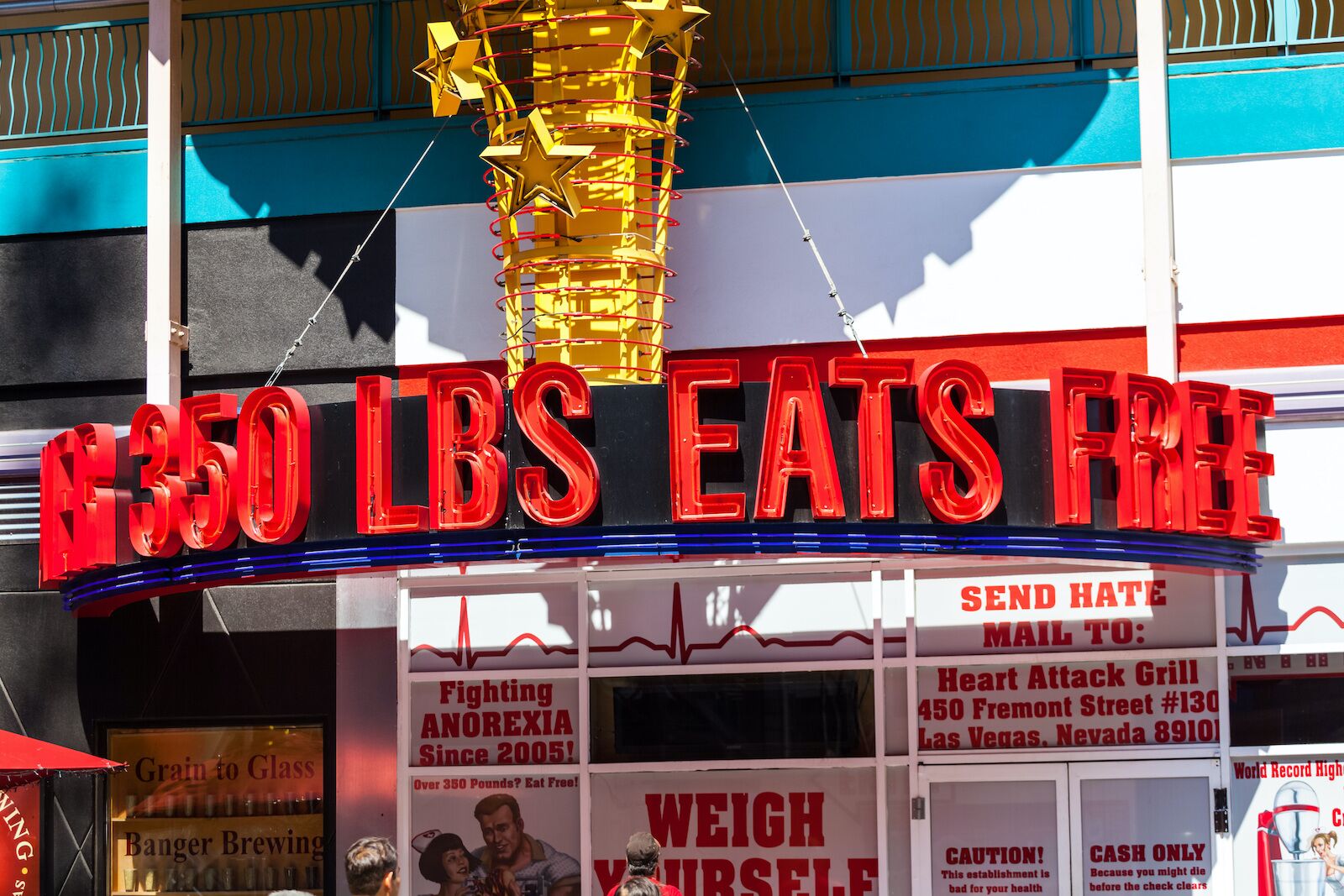 Has anyone had a heart attack at a Heart Attack Grill?

What is the Octuple Bypass Burger?

Heart Attack Grill’s Octuple Bypass Burger is monstrous creation: The stack of 8 beef patties is adored with 40 slices of bacon and 16 slices of cheese, plus an entire onion, and on top of that its topped with chili – oh, it wouldn’t be a burger without the buns. This tower of meat and cheese doesn’t sound that appetizing, but people on Youtube have tried to finish all 20,000 calories of it.

If you want to see for yourself, Heart Attack Grill is located at 450 Fremont St. in Las Vegas, Nevada.