Finland has two seasons: cold and summer. You’ve got cold without snow in October and November, and cold with snow from December to April. In summer, on the other hand, the country is transformed. Leaves return to the trees, deep red strawberries grace farmers markets, and everyone heads outside and to the water.

While some folks depart for one of Finland’s 40,000 islands or 188,000 lakes (yes, you read that right), others opt to enjoy the water and the outdoors right in Helsinki. And since it’s light out into the wee hours, they can enjoy the watery view while listening to DJ-spun beats, cocktail in hand. All over the city, shuttered structures open their doors and put up patio umbrellas. Empty seaside lots become live-music destinations, and rooftops once coated in snow turn into summery party destinations. These are our favorite Helsinki bars that are only open from May to September. 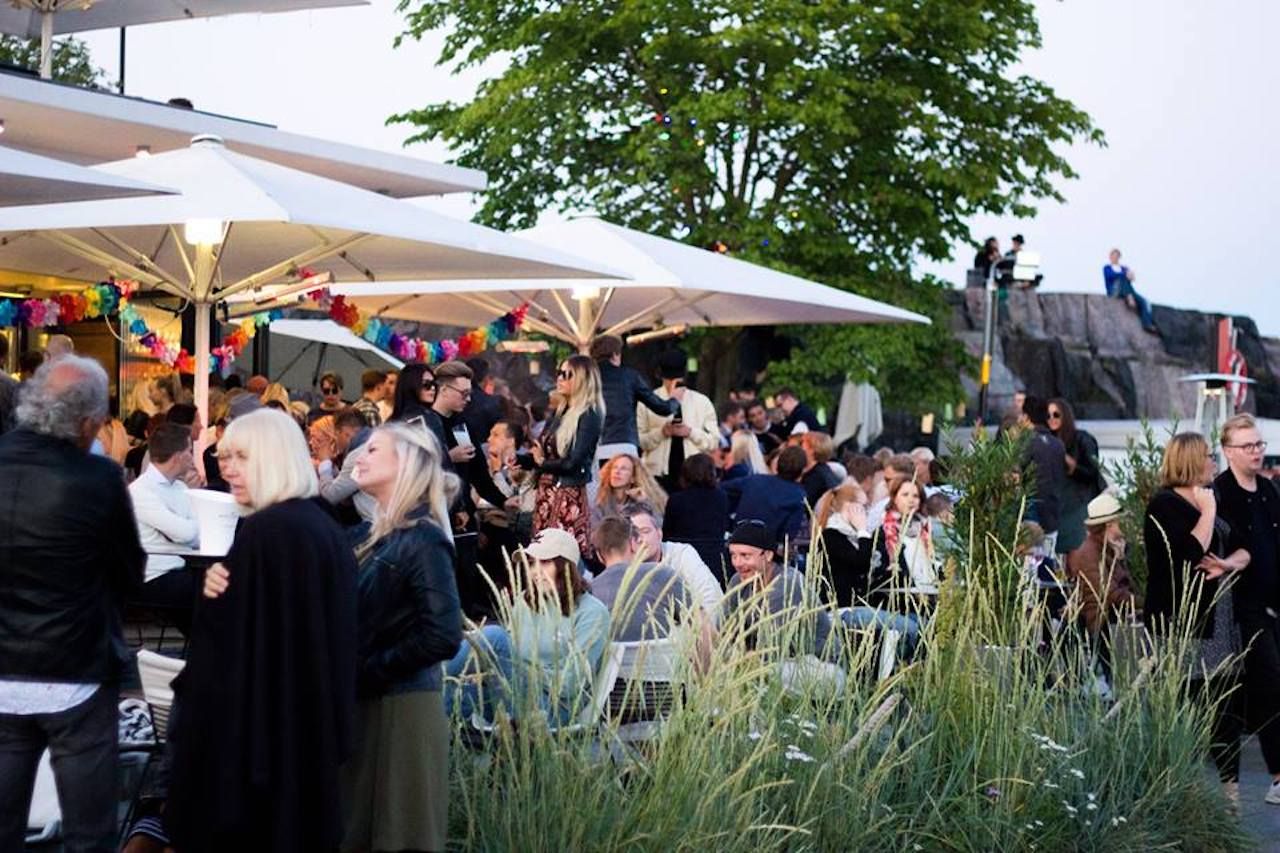 Every summer night, this classic establishment draws Helsinki’s beautiful people to one of the loveliest stretches of the city. For most of the year, Mattolaituri is a non-descript structure covered in snow, located between a large woodsy park and the water’s edge. In summer, Mattolaituri’s doors are open, its white umbrellas, tables, and chairs increasing the structure’s footprint four-fold.

Each evening a golden glow colors the scene as Mattolaituri faces southwest, toward the setting sun — which, at the height of summer, doesn’t dip below the horizon until nearly 11:00 PM. Out front and on the roof upstairs, locals in collared shirts and pastel-hued dresses toss back rosé and people watch, or they admire the boats passing between them and the tiny island less than 100 yards away. On weekends, the DJ spins tunes until the sun is out again.

Where: Ehrenströmintie 3 A, 00140 Helsinki, Finland 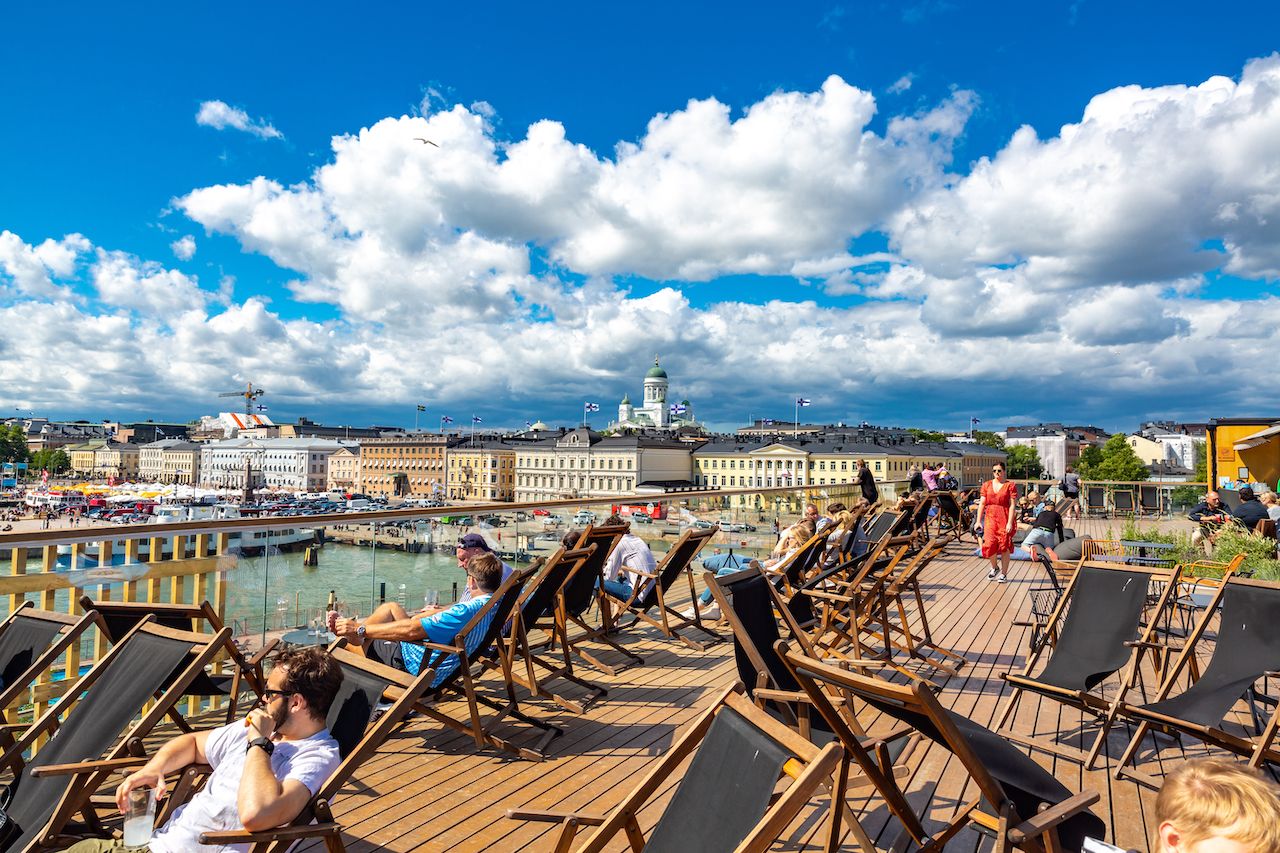 Allas Sea Pool is best known for its incredible pools, built right over the Helsinki harbor and next to the market square, the ferries to Helsinki’s myriad islands, and the President’s Palace. Allas also has a great public sauna. While Allas has dining options all year, its rooftop is only open for drinks in summer. It’s a must-stop after a day spent downtown shopping the Esplanade boutiques for Finnish designware from Marimekko and Iittala. Order some cocktails and head upstairs. Drink in hand, marvel at people swimming laps below you in the seawater-filled pool and savor the beautiful city view behind them.

Where: Katajanokanlaituri 2a, 00160 Helsinki, Finland 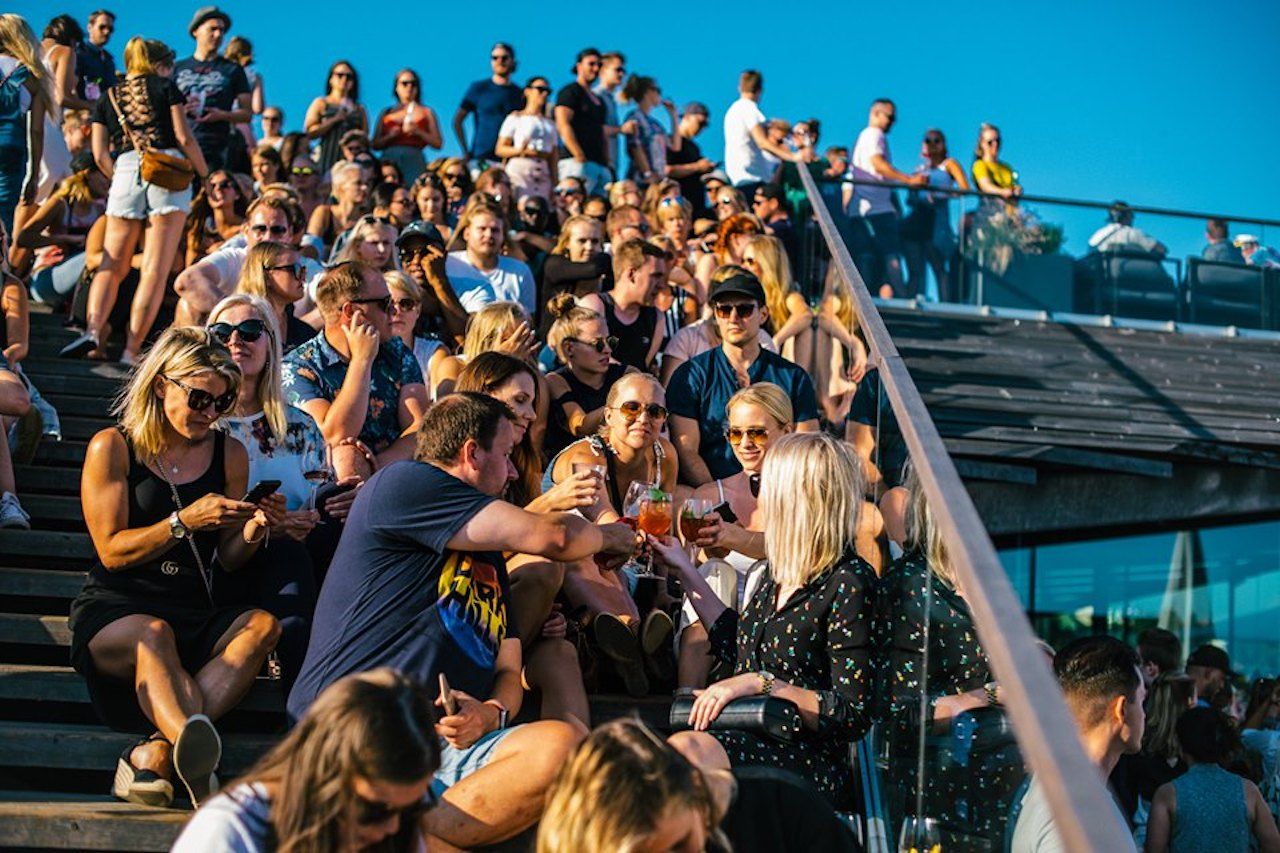 Like Allas, Löyly is open all year. While the restaurant serves up amazing salads and an incredible vegetarian pulled “pork” sandwich (you won’t believe it’s made with oatmeal), it’s equally well known for its excellent saunas. The saunas are the reason for its name since löyly refers to the warm feeling you get when water hits hot sauna rocks.

The eye-catching wooden structure is just a 20-minute walk from the Mattolaituri bar. The stroll is worth it, as you can admire Helsinki’s beloved Koivopuisto Park on one side and the isle-dotted sea on the other. In summertime, Löyly’s unusually shaped roof and sloping sides become a prime party destination. Like at Mattolaituri, you’ll want your sunglasses with your cocktail, as you’ll be bathed in a warm sunset sheen for hours. 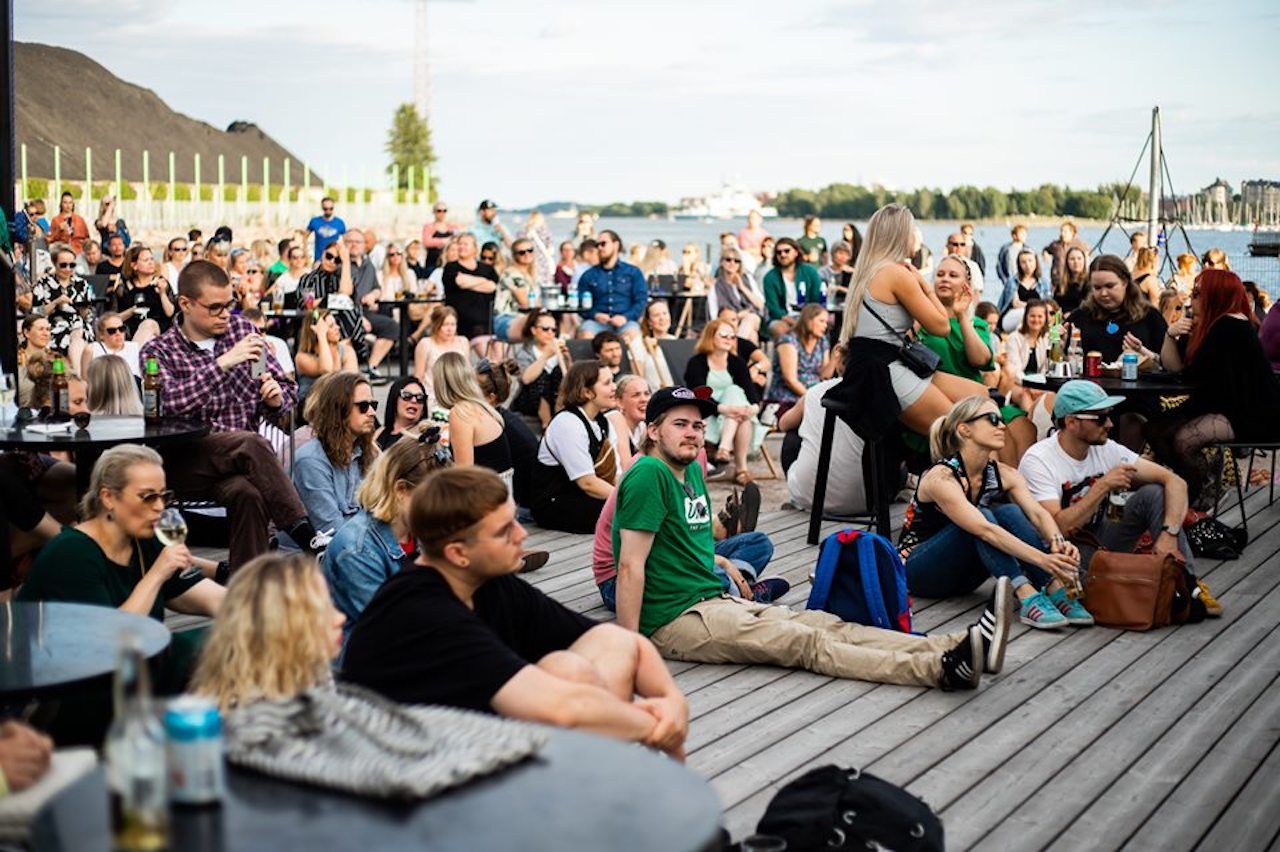 For a less swank but hipper scene, head to the other side of Helsinki just past the once-working-class, now trendy, Kallio neighborhood to Leblon Merihaka. This pop-up summer hangout is welcoming all day long, with yoga classes, food stalls, and stand-up paddleboards. When people really show up, though, is the evening hours when singers, bands, and other performers are on the roster. Live music, a cold Lapinkulta beer, and the island-dotted sea make an interesting juxtaposition with Helsinki’s towering inland smokestacks. 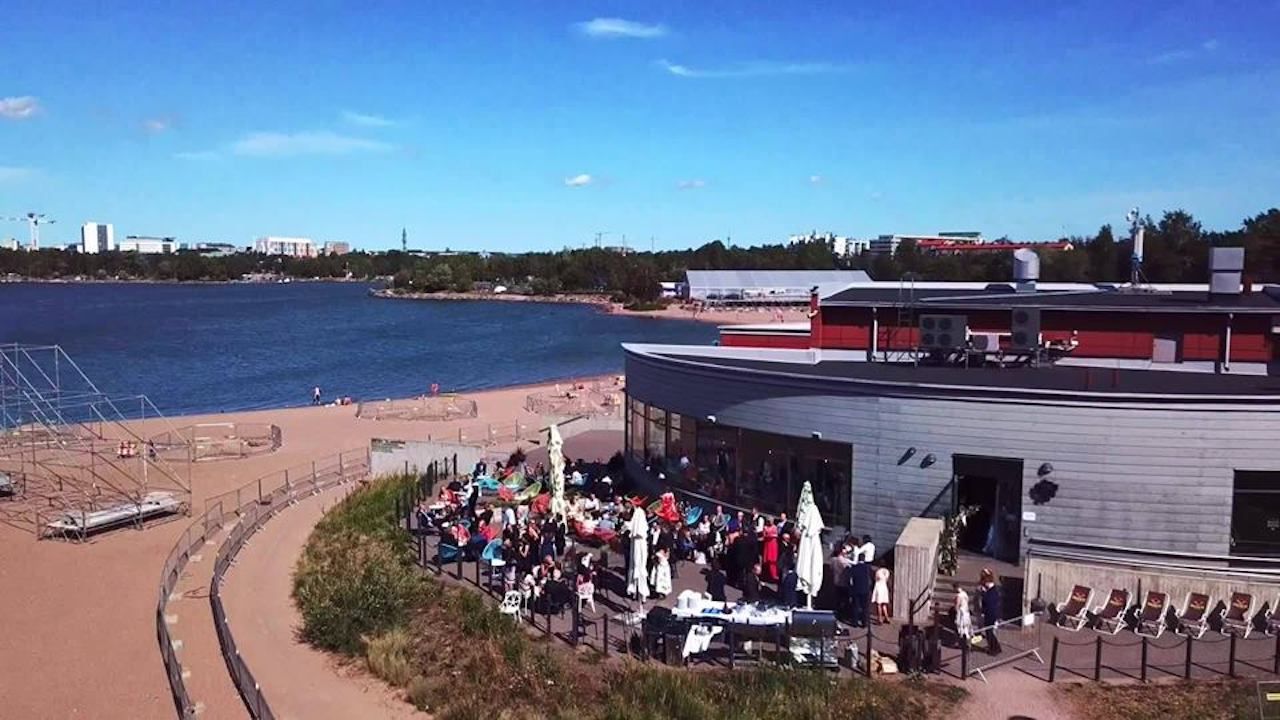 Hietaniemi Beach is a wide stretch of sand that has long been a favored summer destination for lounging, volleyball, swimming, and possibly pretending you aren’t actually at the 60th latitude above the equator. A couple of years ago, beachgoers got the addition of a new building that’s only open in the warmer months.

Badenbaden’s big deck is the perfect place to order a Caipivodka and pretend you really are somewhere tropical — all while never leaving central Helsinki. When you can’t fly south for the summer, it’s a handy Helsinki shortcut for that beachy vacay sensation. 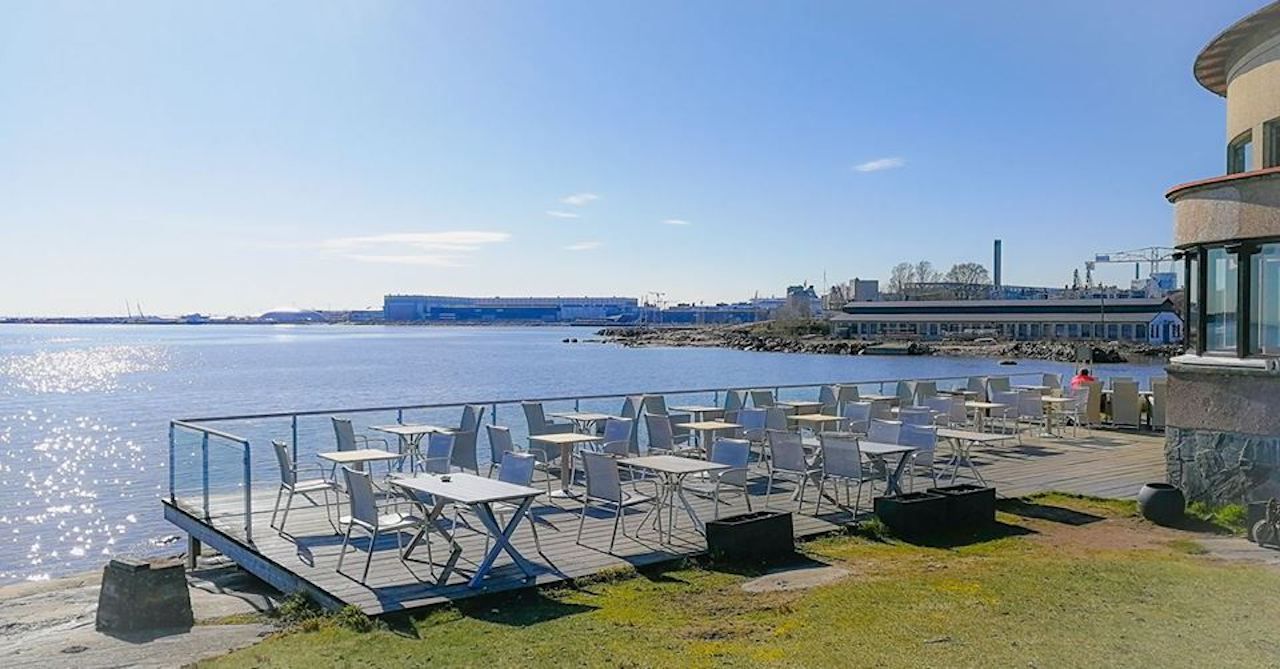 For a more low-key summertime drink by the sea, head to the HSS Paviljong restaurant. While you could probably walk there across the frozen Baltic Sea in January, it wouldn’t be open when you got there. Best to wait until summer when a ferry will take you the ridiculously short distance to this rocky outcrop — an islet that’s called Liuskasaari in Finnish but Skifferholmen in Finland’s other official language, Swedish. It’s not far from Löyly, and you can see the isle from Löyly’s steps.

The restaurant is only open in warm weather, and its terrace is definitely a summer-only fixture. It’s right next to the HSS Sailing Center, so it’s popular with the sailing set. Order a glass of Champagne and watch the sailboats navigating their way around Helsinki’s stunning archipelago.