For out-of-towners, Ireland is usually summed up as the land of Guinness, craic, and cable-knit sweaters — a description that ignores many of the greatest aspect of the country, including hiking. As an outdoors destination, Ireland is totally underrated. The Camino may hog the spotlight when it comes to European pilgrimage routes, but make no mistake: A hike up Croagh Patrick is just as spiritual and the views just as spectacular. While the distance is much shorter than the Camino, the Croagh hike is plenty challenging. Here is everything you need to know to tackle this demanding but rewarding peak on Ireland’s west coast.

Why is Croagh Patrick such an important pilgrimage site? 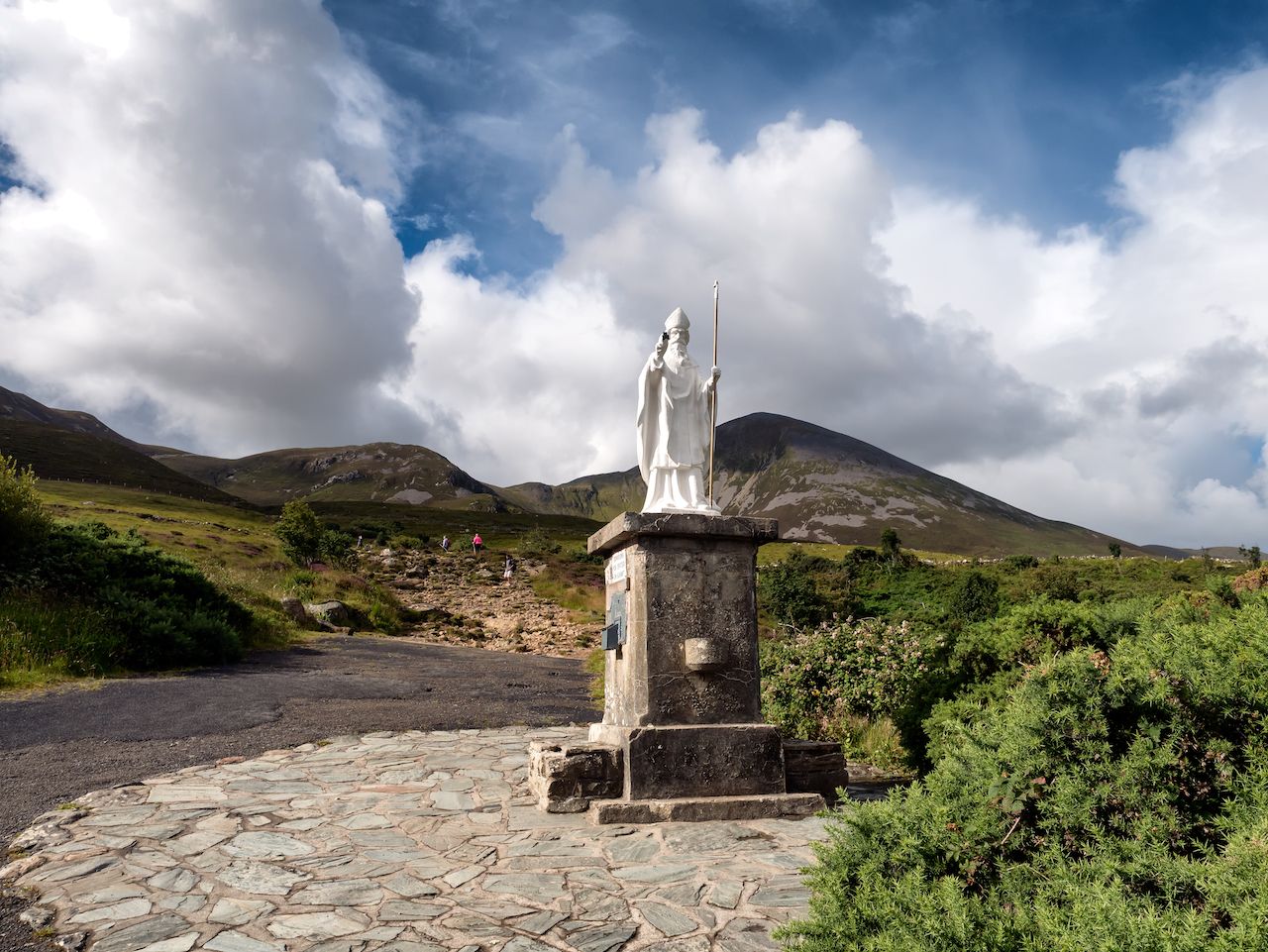 Historians believe that pagan pilgrims climbed the 2,056-foot peak to celebrate ancient festivals such as Lughnasadh, the celebration of the harvest, as early as 3,000 BC. When St. Patrick brought Christianity to Ireland in the fifth century, he fasted on the summit for 40 days, which led to the mountain getting its current name.

Every year, on the last Sunday of July, also known as Reek Sunday, up to 25,000 pilgrims climb Croagh Patrick, some of them doing it barefoot. Those who forego shoes do so to mirror the experience of their pagan ancestors; some do it in memory of someone they’ve lost, and others do it simply for the added challenge it brings. But whether barefoot or booted, religious or non-religious, this hike is a rite of passage for Irish people everywhere. On weekends or public holidays throughout the year you’ll see whole families — from young children to grandparents — heading up the mountain together.

Preparing for the climb 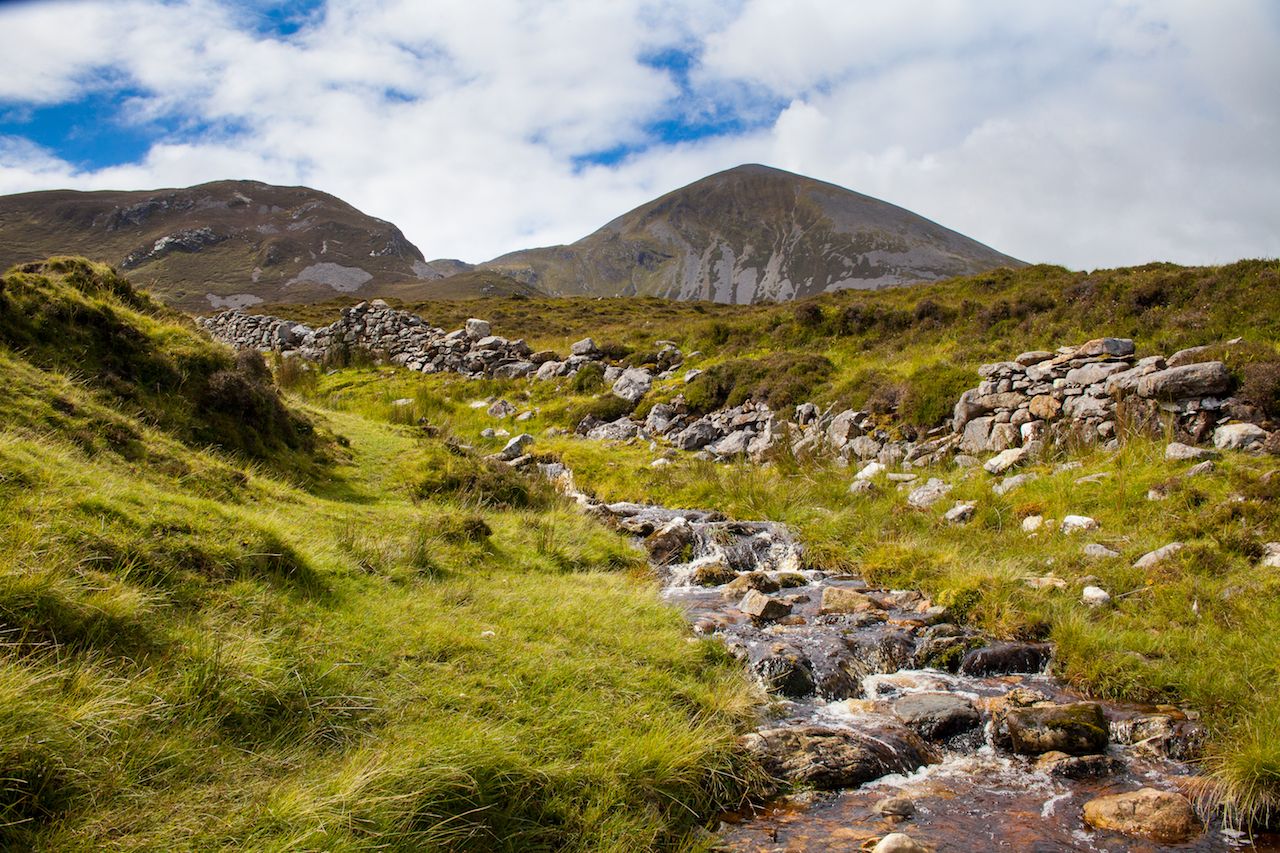 The nearest town to Croagh Patrick is Westport, a well-established tourist hub with regular train service from Dublin and regular bus service from other regional towns. If you’re planning on spending some time in Galway, note that it takes fewer than two hours to get to Westport, so you can hike Croagh Patrick in an overnighter. If you’re driving the Wild Atlantic Way route along the west coast, both towns will likely be stops along the way.

The foot of Croagh Patrick is around 5.6 miles west of Westport. The easiest option is to get there by car or taxi since public transport is sparse. There’s a large pay-and-display parking lot, a pub, and a visitors center where you’ll find secure lockers, hot showers, a cafe and, of course, a craft shop. The high season is April through September. With the exception of the parking lot, everything is likely to be closed outside those months.

Ireland’s weather is unpredictable no matter the season and even more so among the mountains. So pack warm and waterproof layers in your backpack, along with the usual essentials. We strongly recommend you wear your toughest hiking boots and swallow your ego by using a walking pole. You can rent sturdy wooden poles from a hut in the parking lot. Every year, unprepared climbers end up injured or with hypothermia due to fast-changing weather conditions and the dangerous descent. Mayo Mountain Rescue is now advising pilgrims not to undertake the hike barefoot at all due to the increase in callouts for help and emergency airlifts from the mountain. In 2018, on Reek Sunday only, there were 17 people injured treated and assisted by Mountain Rescue teams and Order of Malta doctors on Croagh Patrick. 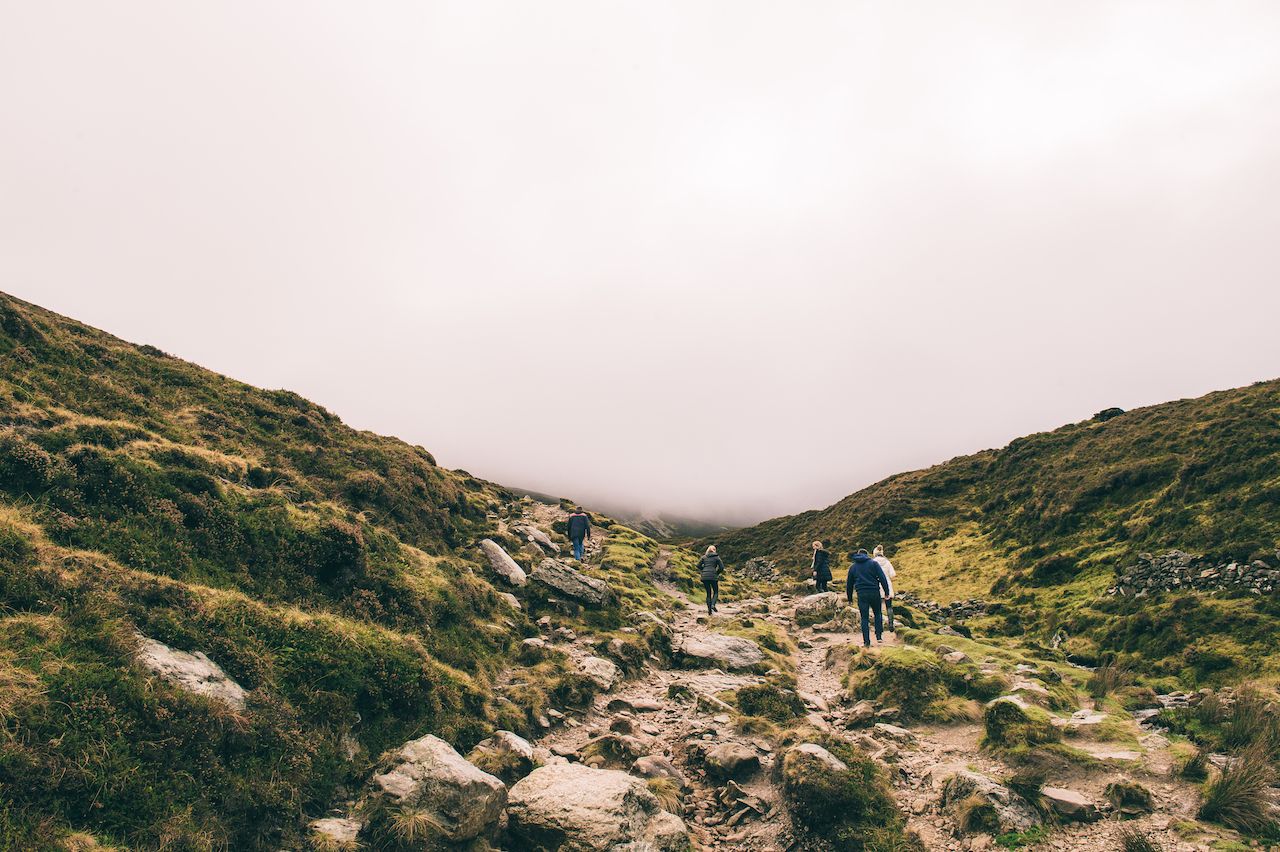 The distance from the parking lot to the summit and back is 4.22 miles. It takes the average climber three and a half hours: two hours ascending, an hour and a half descending. Although you’ll see all ages along the route, keep in mind that the higher up the mountain you go, the more difficult the climb gets. As the terrain is mostly loose stones and gravel, it’s very easy to lose your footing, especially on the way down. Plenty of people only hike part of the way, so don’t be ashamed to join them if you find it too challenging. 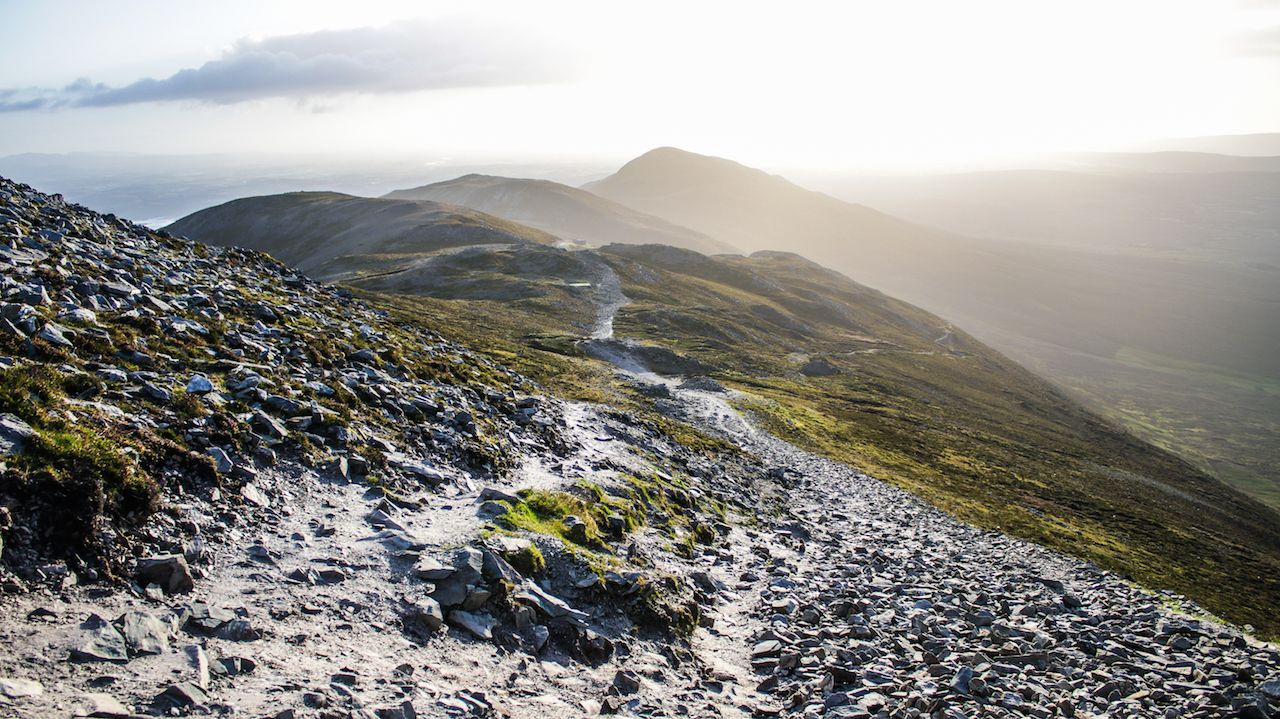 The trail begins on a relatively flat country road, which gives way to a loose gravel path once you meet the statue of St. Patrick. After that, it’s a steady ascent up to and along the shoulder of the mountain. If you’re hiking without a guide and have little or no mountaineering experience, the top of the shoulder is a good place to stop. From here, it’s a steep, slippery, and rocky trail along the upper slope to the summit. Using your walking pole is the best way to tackle this final zig-zag approach. Exercise extreme caution at all stages of the trail but especially on the descent or during busy periods like St. Patrick’s Day, Reek Sunday, and fair weather weekends during the summer months. 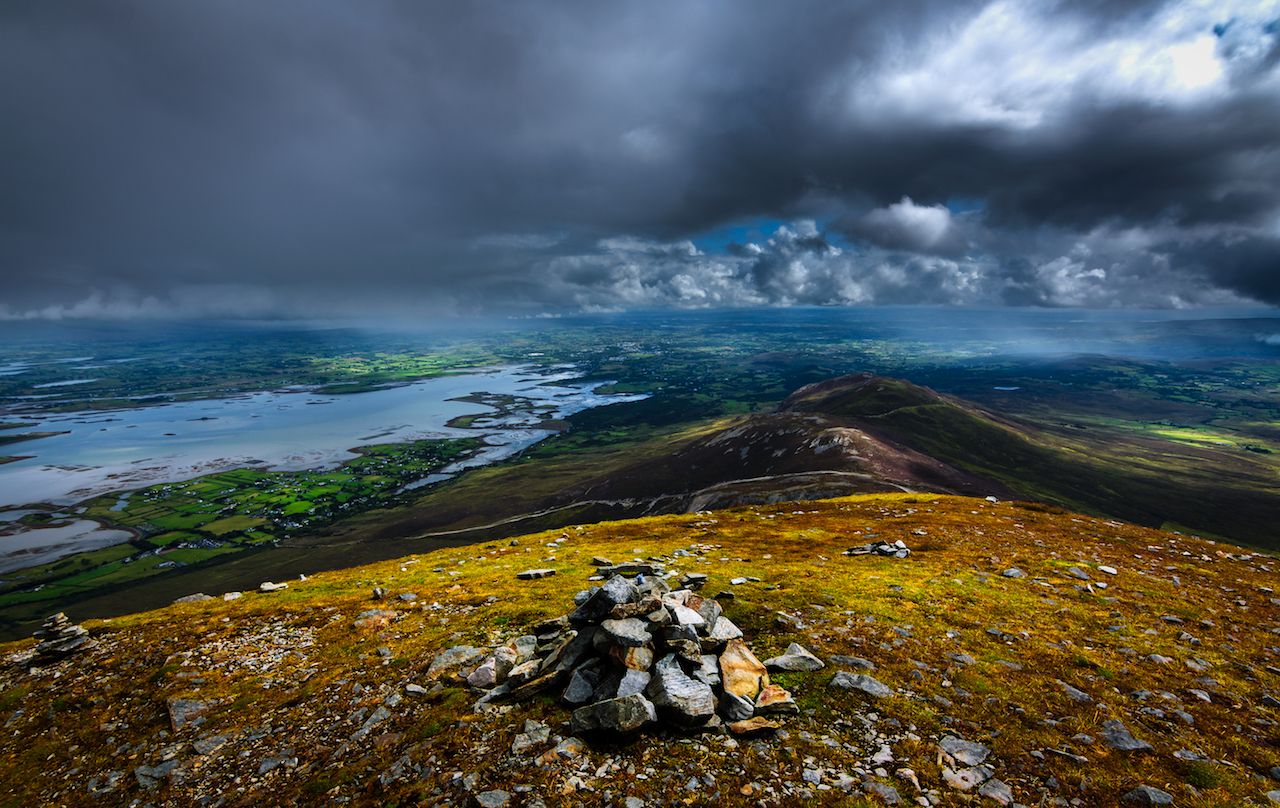 From the outset of the climb, you’ll be treated to spectacular panoramic views of Clew Bay, which is home to over 300 drumlin islands. From the summit, you can also look south over the Sheeffry mountains and north over the Nephin Beg range. However, due to the aforementioned unpredictable weather, Croagh Patrick’s summit can often be shrouded in low-lying clouds. 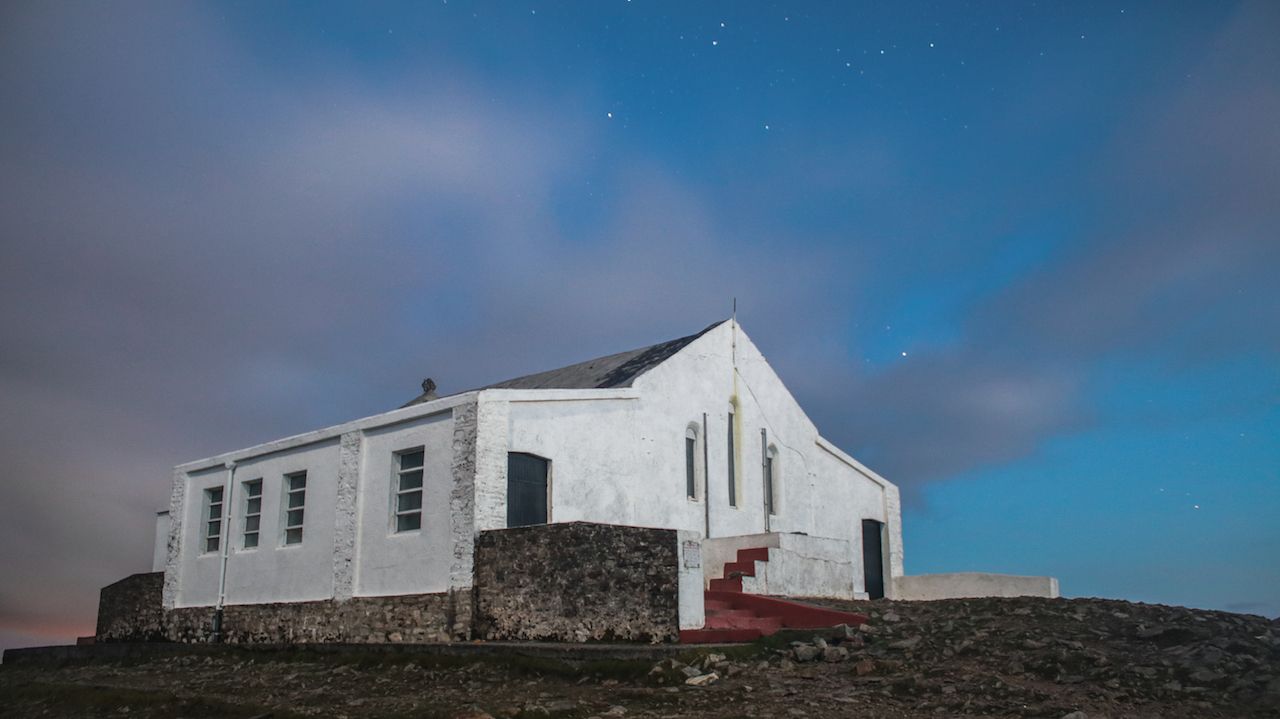 If you struggled to the summit only to have your view obscured by fog, you can still explore the chapel at the top. It was built in 1905 on the foundation of a stone oratory, which experts have dated to between 430 and 890 AD. On Reek Sunday, you can catch Mass inside if you’re so inclined.

If you still have energy and time to spare after the hike, the nearby village of Louisburgh is undeniably picturesque. Clare Island, the largest in Clew Bay, or Achill Island, the largest in Ireland, are two great adventures if you have another day to spare in the area. Otherwise, settle into a seat in Campbell’s and enjoy that victory pint of Guinness while you wait for your transport back to Westport.

The Ultimate Guide To the Many Accents You'll Hear in Ireland

May 17, 2022 Matthew Dursum
✖
travelstoke
Download the mobile app
stoked by